James Sage enjoys cycling but he has become quite particular about the products he uses. He explains the process of putting together a special project bike mixing a classic Cinelli frame with modern components… and why he did it. 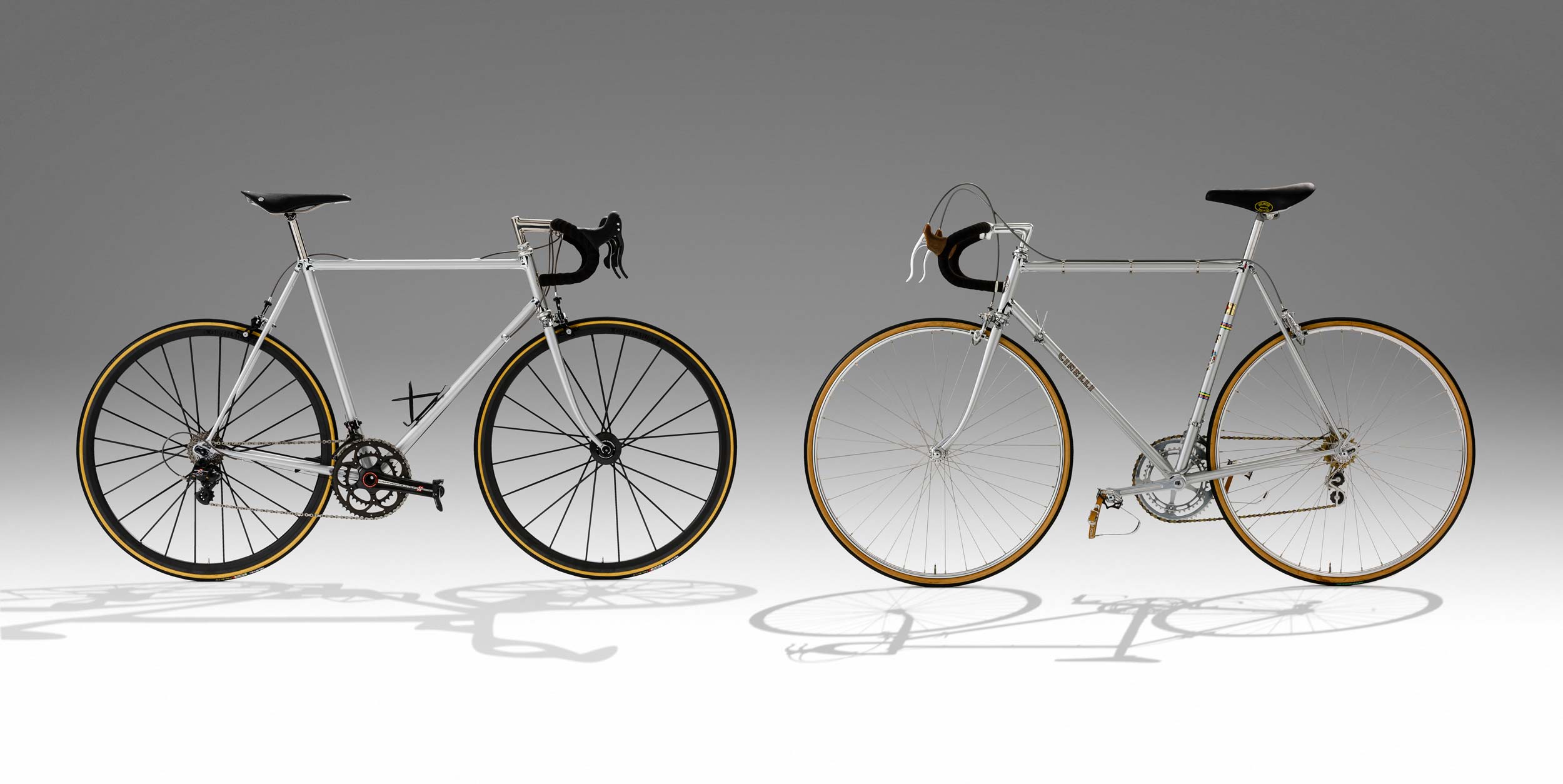 – Other feature by James Sage: Masi replica, the Breaking Away bike –

Not so long ago I returned to road cycling after a 25 year break. Like many I bought myself a reasonable, mass-produced carbon bike – a Giant TCR in my case – and set off to reconnect with riding and engage with two decades of technological changes.

There’d be other bikes and the weight-weenie bug soon bit, and my newly acquired BMC Pro Machine was soon stripped of paint and built up with lightweight exotica. The 5.5kg finished bike was light, stiff and striking to behold but seemingly lacking in the personality and magic that made me want to ride at every opportunity as a kid. 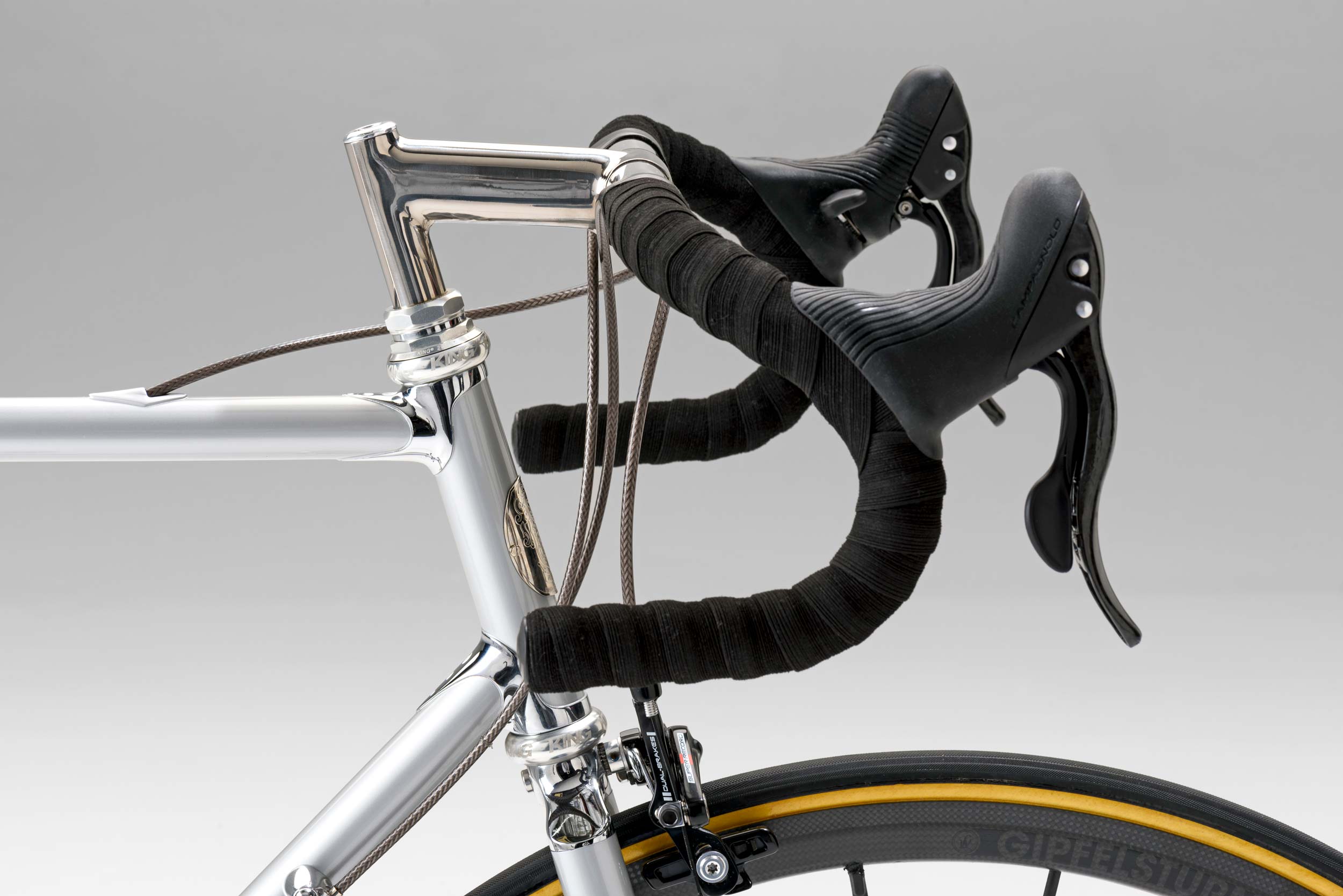 A frame from 1971 with a Campagnolo Super Record groupset from 2013.

Happily, I was soon to discover that the magic was still there to be found.

Back pain from a youth of contact sports was increasingly hampering my enjoyment of riding and several friends suggested I go and see Darren Baum. It was a fateful visit that would change my perspective on bikes totally.

Six months after my initial call to the frame maker I took delivery of a superbly crafted titanium Corretto specifically designed and finished to meet my exact geometry, riding style and aesthetic requirements.

The ride quality was an absolute revelation – the magic and joy of childhood memories had returned. This was a bike that was both responsive and incredibly comfortable. It felt alive rather than simply stiff and it engaged with the road in a way that my carbon bikes didn’t.

Handling on winding fast descents – my acid test for bikes – was fast and sure. I was out of the carbon bike arms race after one ride.

The following year the BMC got ridden just twice and the year after not at all. I had turned to titanium and found that it suited me better than carbon-fibre. 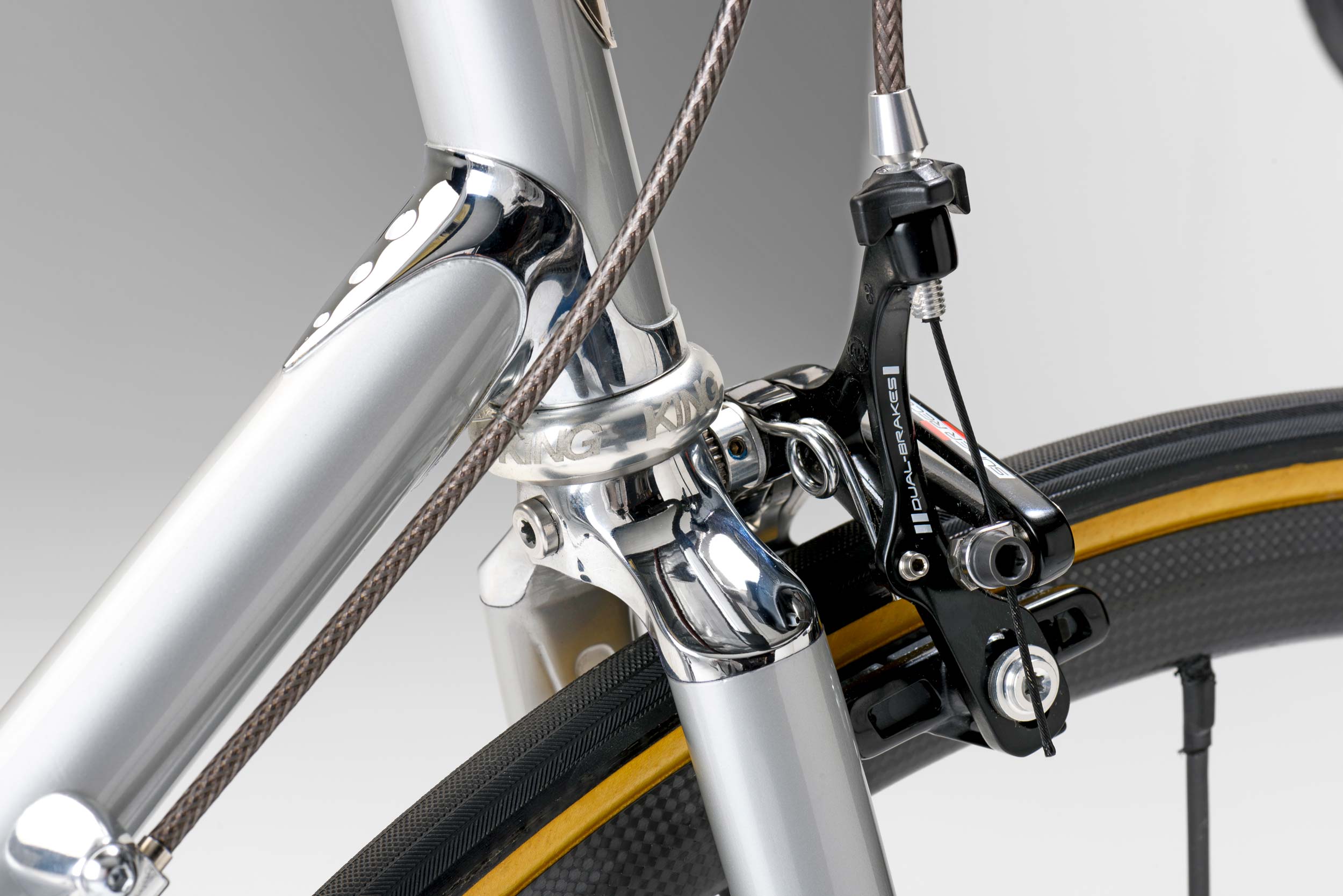 Working with Darren and his team had also opened my eyes to the magic world of hand-crafted bikes and the passion, life-long commitment and capabilities of the people who create them.

The experience of riding a bike where every element of the frame is designed for you imparts a sense of substance and enjoyment that was completely absent in my production carbon bikes. For me this pleasure came in no small part from consciously supporting craftsmen who are squarely focused on quality, longevity and attention to detail rather than design for efficient mass production and the whims of marketing. 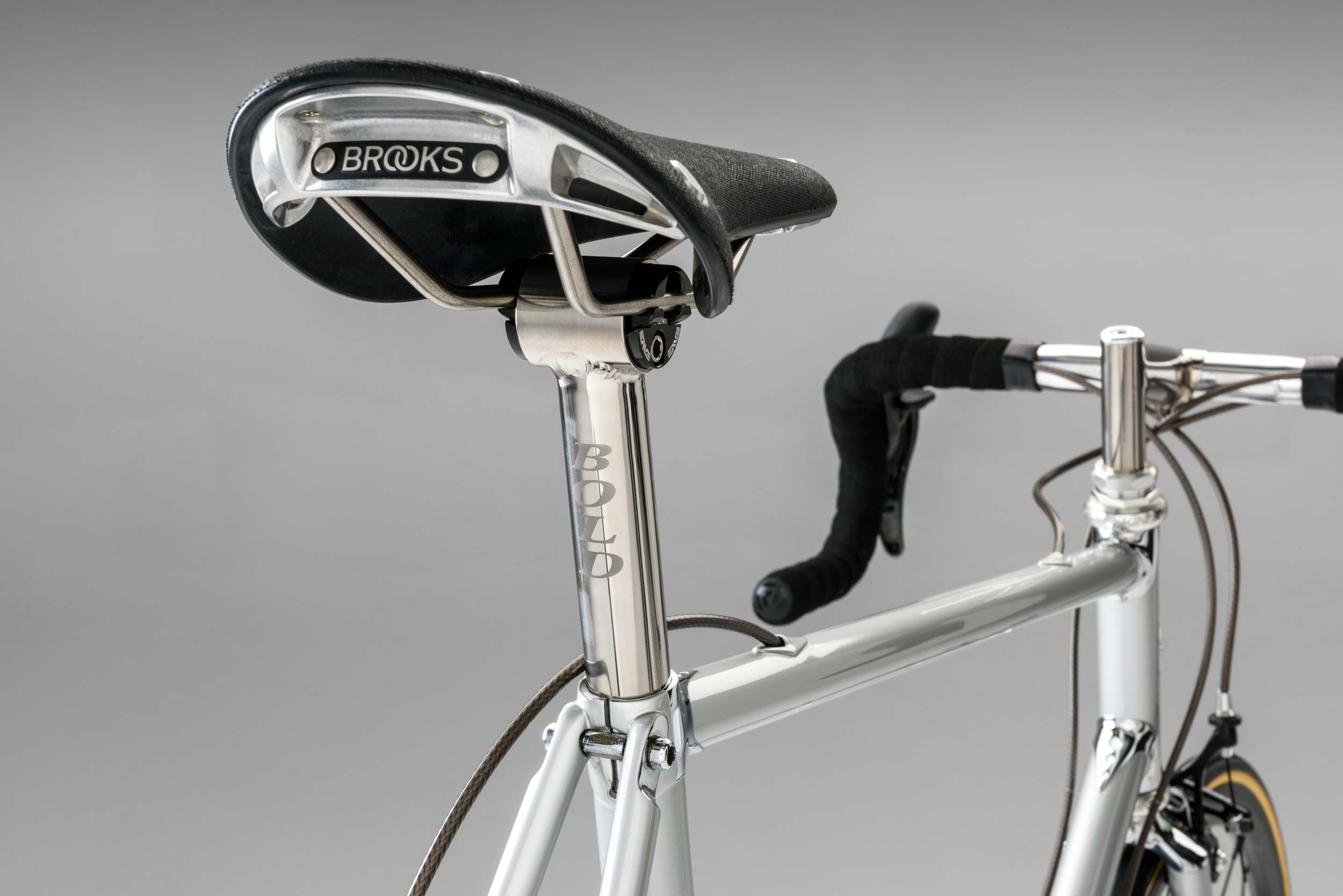 My Baum experience whetted an appetite for craftsman-led bike design and manufacture which quickly grew.

From titanium it was a small step to investigating the legendary ride qualities of steel.

Contact with vintage cycling enthusiasts also led to an interest in the legendary frame and component makers of past eras generally and the Italian masters in particular.

A succession of bike projects soon followed, centred around hand-built steel frames and included period correct restorations of a 1950s Bianchi and 1970s Cinelli, a Pinarello team bike ridden in the 1986 Giro d’Italia and a restored 1983 De Rosa frame equipped with modern Campagnolo running gear. A custom-made modern steel-frame tandem bike for riding with my kids also made it into the mix. 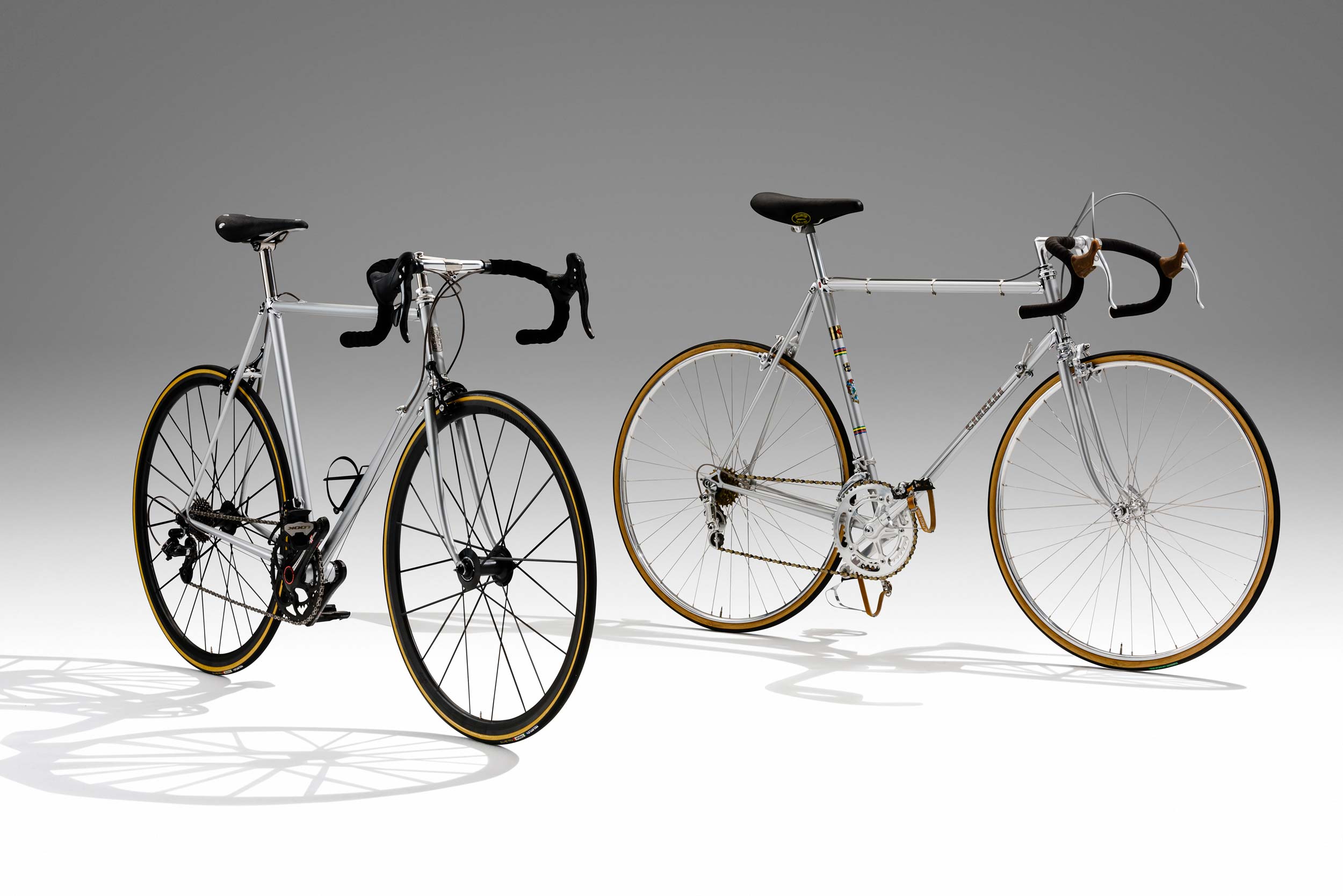 Each project encapsulated the skill and dedication of craftsmen with a common passion for cycling but individual ideas about what makes a perfect bike. Of course all offered the pleasure of riding steel as an end reward. By this stage my BMC was under a thick layer of dust.

Sensing that the space in our modest house was fast approaching its limits, I conceived the concept of an ultimate project to capture the essence of everything I admired and enjoyed about cycling in a single bike. Of course excellent ride qualities were a given requirement.

It took two years to complete – due both to the lengthy process to finally decide what parts would adequately capture my intent and then actually finding them. 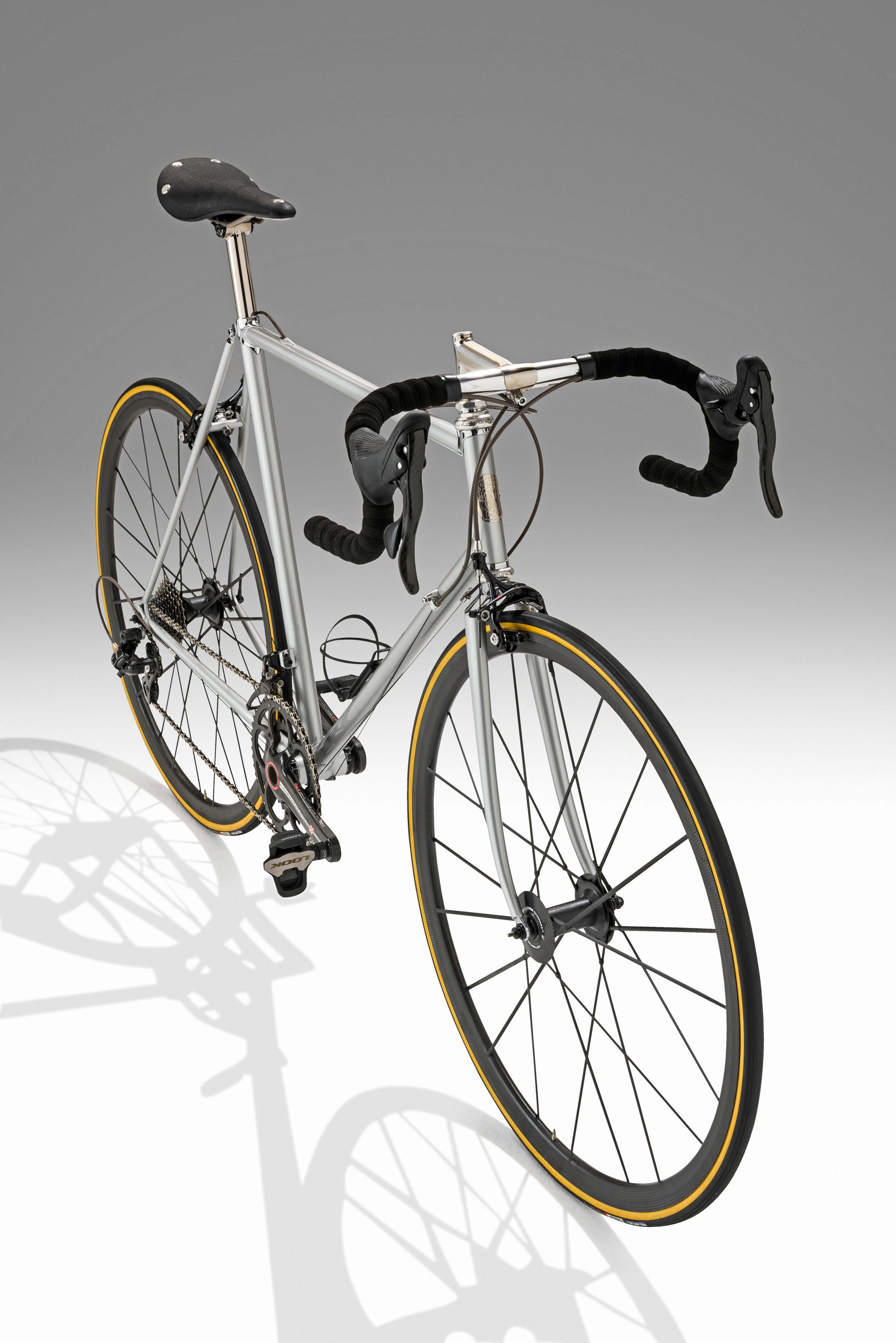 The heart of this ‘ultimate’ bike (for me) is a steel 1971 Cinelli Speciale Corsa frame which encapsulates the history, passion and skill of the Italian masters in the heyday of steel racing bikes.

First created in 1952 by Cino Cinelli the SC is a design classic often described as the quintessential Italian racing machine and attributed with near faultless handling characteristics.

My particular frame was tired and neglected when discovered in a shed in Italy but importantly was made during Cino’s heyday when each frame was custom, handmade to order in Milan and production was intentionally limited to a few hundred per year. 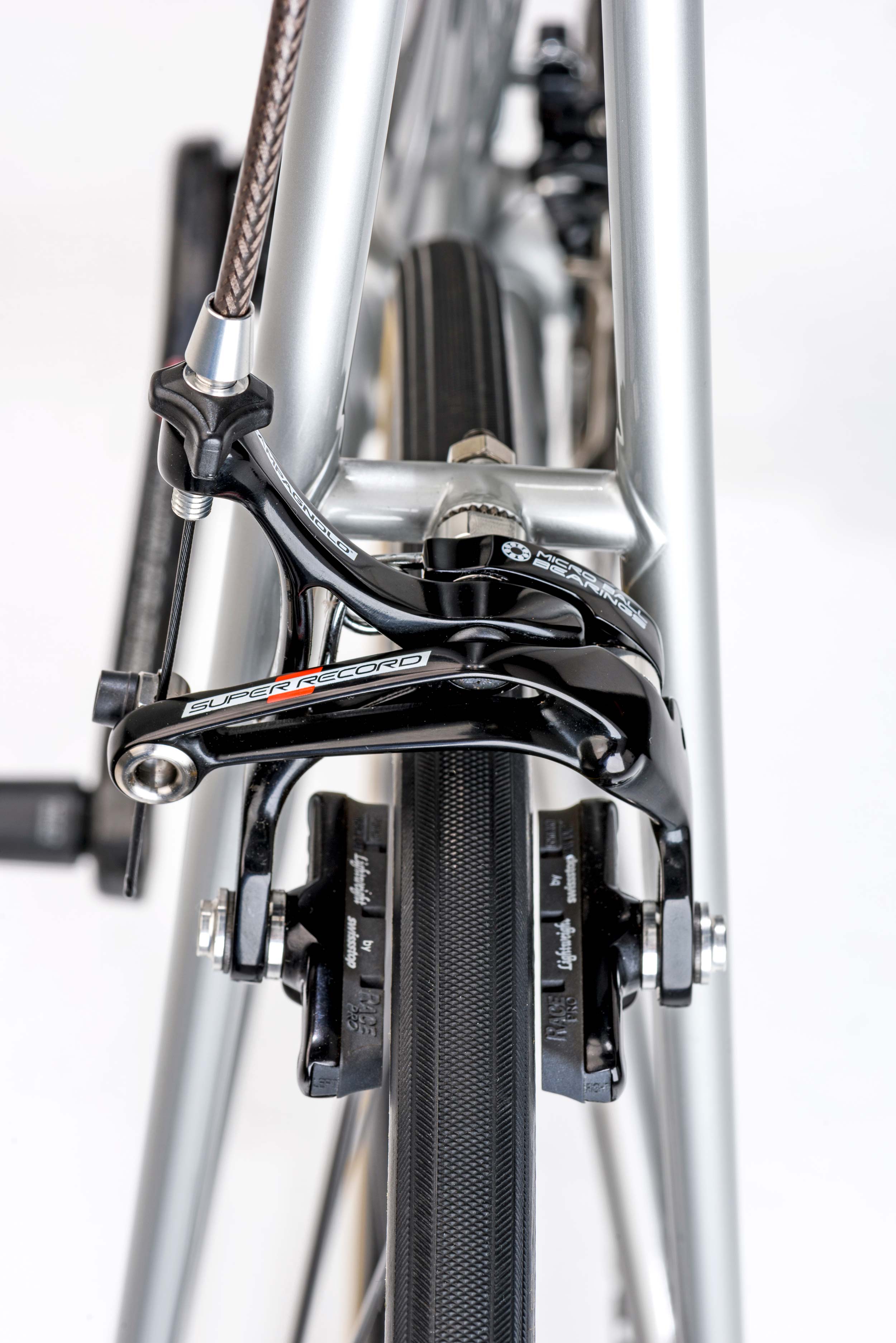 In the hands of Peter Fleming – another of cycling’s rare gems – the frame was stripped to bare metal and given a stunning refinish. Cinelli’s signature fine-grained silver paintwork of the era was carefully reproduced after glorious new chrome work had been applied. Paint was sparingly applied to retain the details of hand-built construction, fine lugwork and file marks.

At my request, replacement decals were not fitted to ensure the distinctive form and details of the frame were going to be a feature without distraction – finished off with a beautiful handmade 1970s Cinelli headbadge replica in polished nickel. 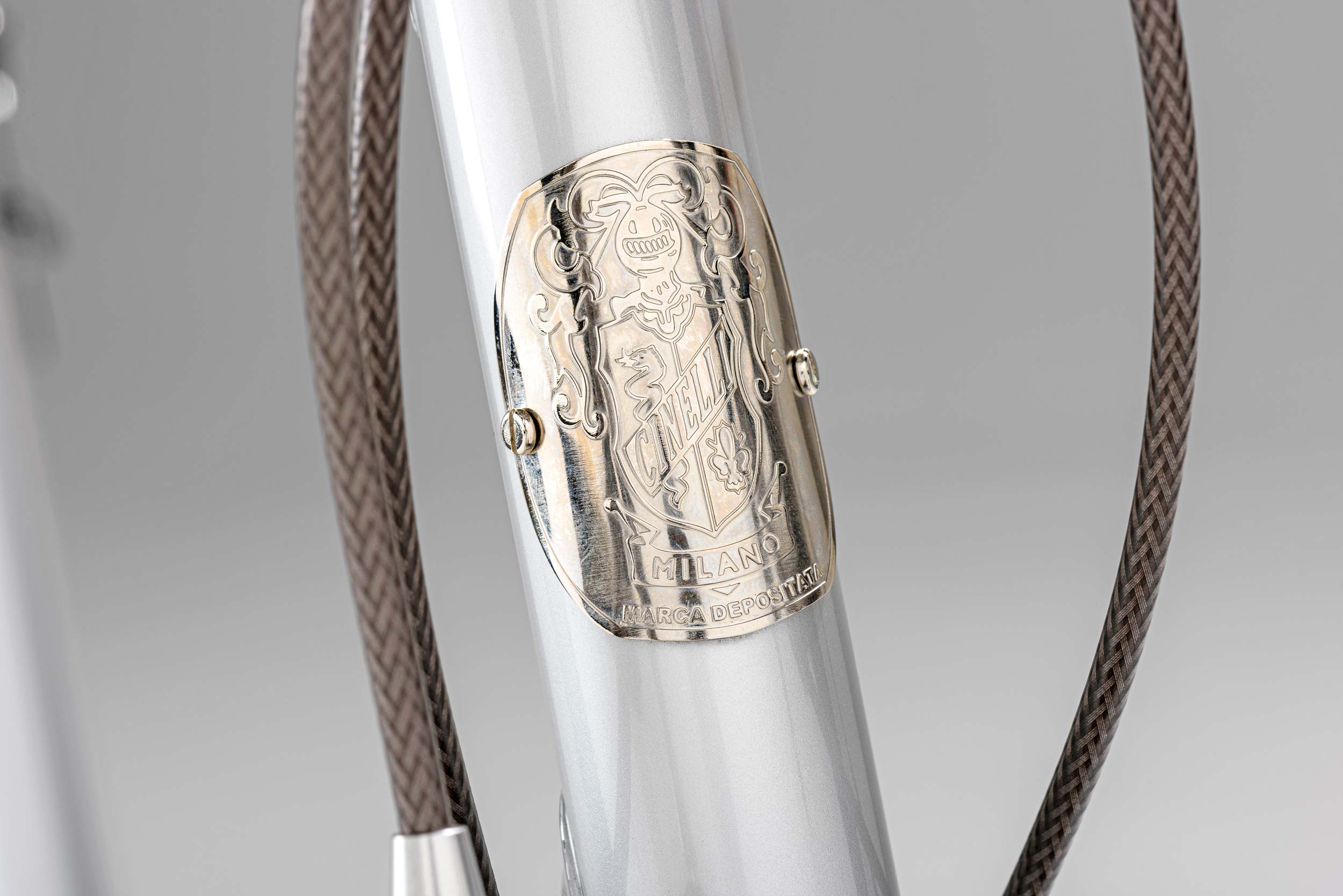 As nice as vintage bikes are to ride, I had decided early in the project that the improved efficiency, light weight and user-friendliness of modern componentry would make the bike more enjoyable to use and allow the steel frame’s ride qualities to really shine.

The selection of groupset didn’t require any thought – Campagnolo. Isn’t it obvious? 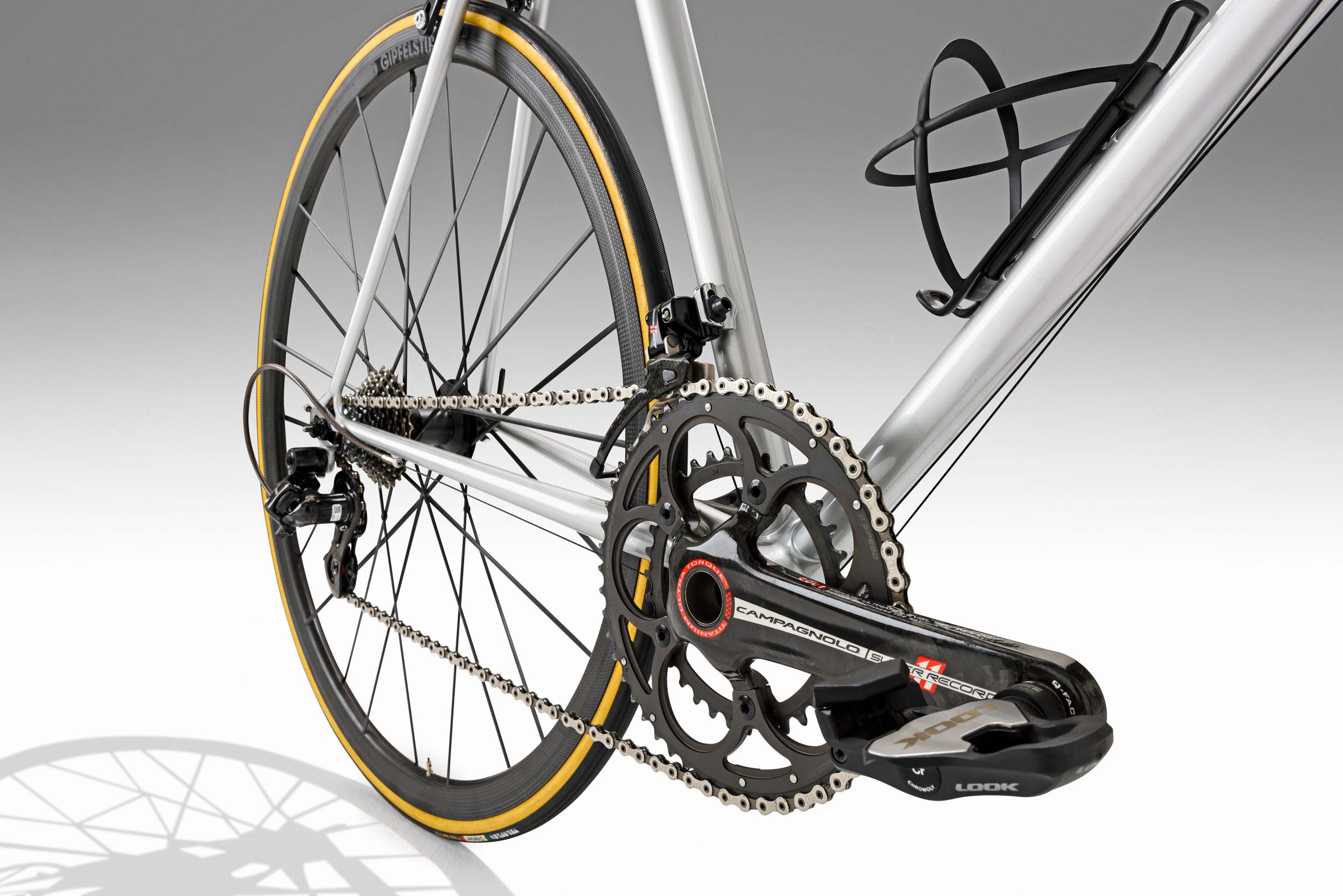 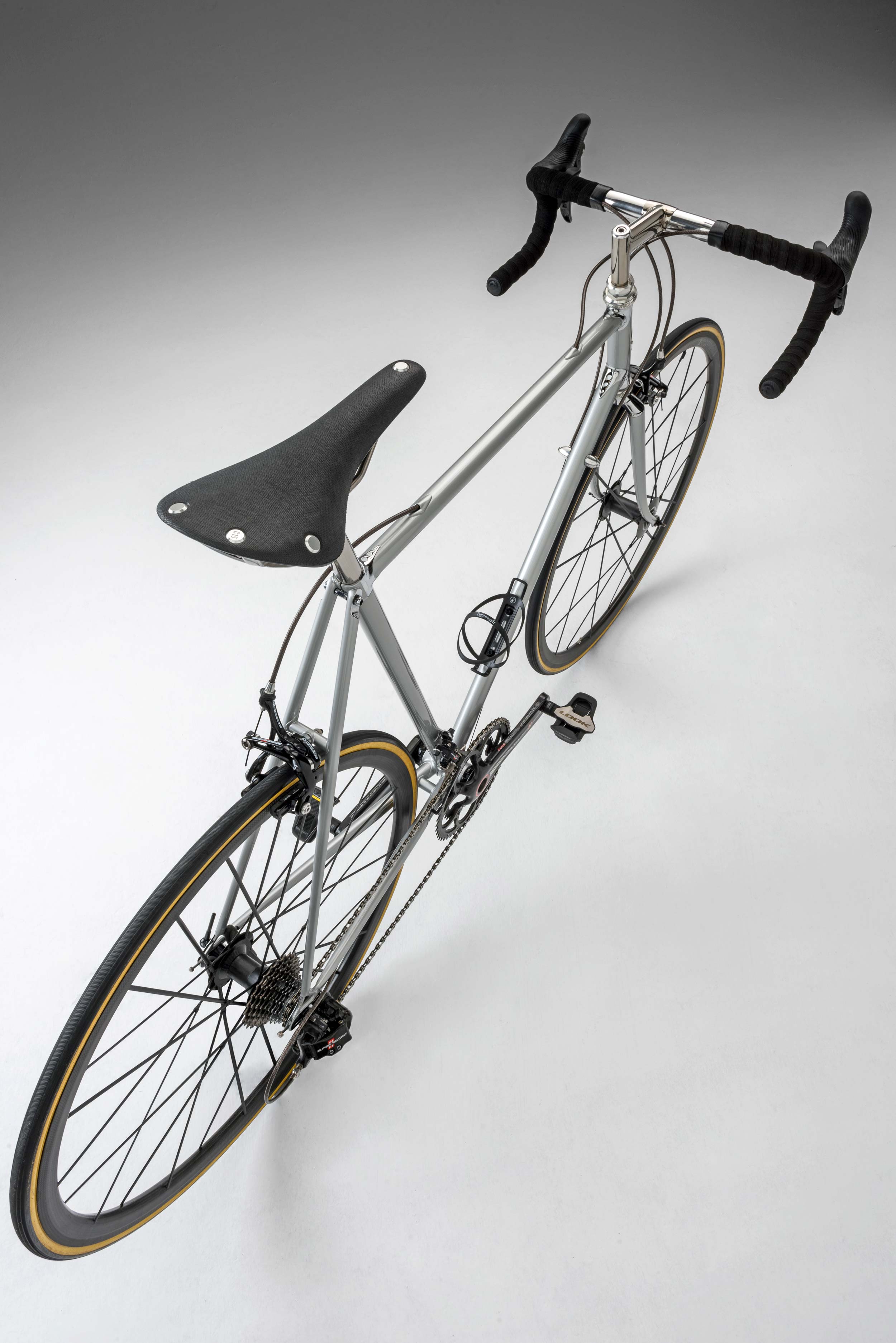 Tullio Campagnolo worked closely with manufacturers including Cinelli during the age of steel, and SC’s were usually equipped with the early versions of the legendary Record groupset – it seemed only appropriate to continue this tradition with a modern twist.

Historical niceties aside, the fact is that Campagnolo is also just so enjoyable to use; it is efficient yet tactile and expressive – seemingly matching itself to the mood of the rider and nature of the ride – fast and aggressive or quiet and relaxed. Of all the iterations I have ridden, 2013 Super Record is my favourite, it’s not quite as quick and efficient as the current version but more elegant and quieter, a perfect match for this project. 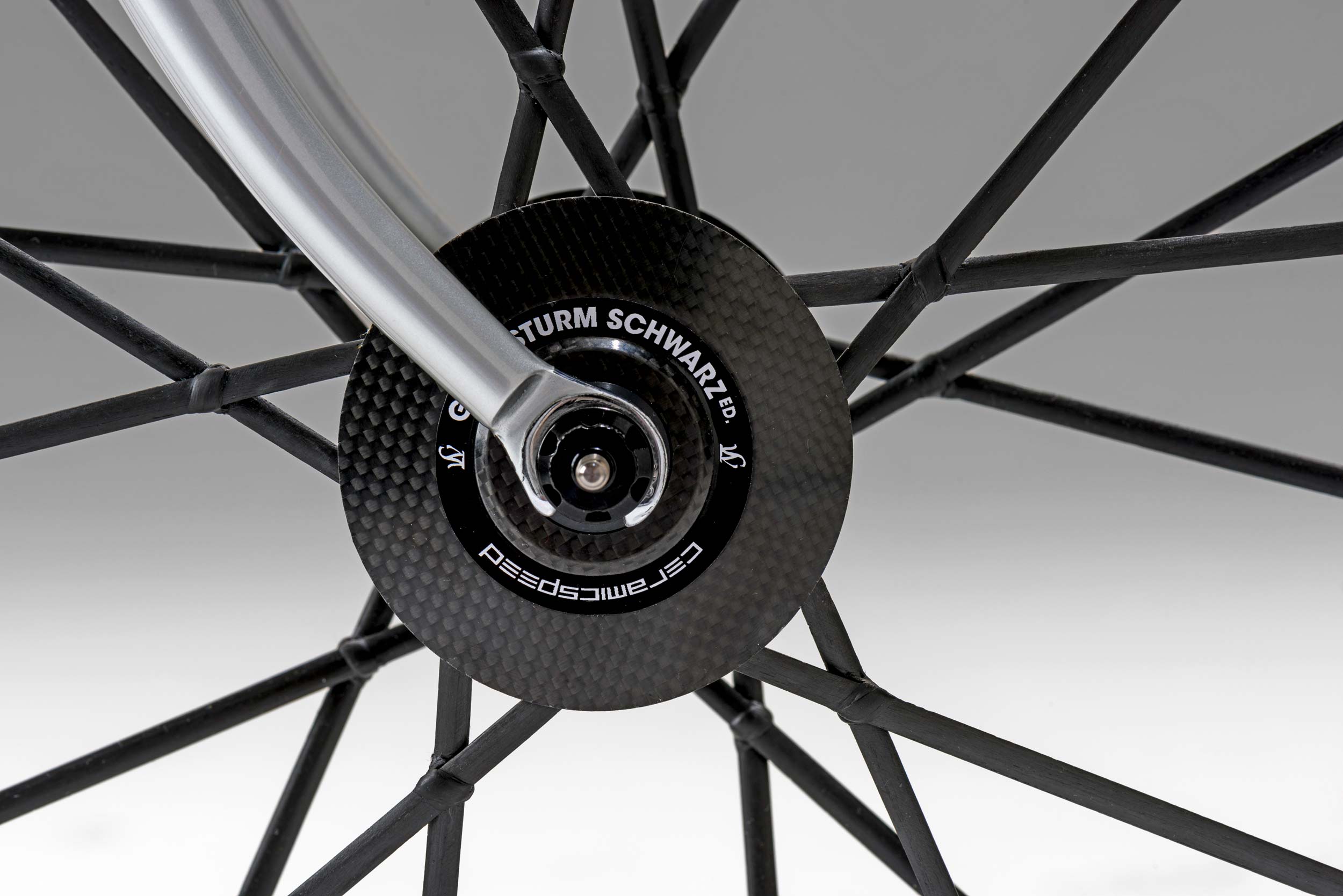 The wheels were the biggest source of deliberation. Ultimately Carbonsport Lightweight Gipfelsturm Schwarz editions were selected.

Like the groupset and frame these wheels are created by a company committed to handmade craftsmanship and innovation without compromise. Even by the high standards of Carbonsports the Gipfelsturm is a unique product. The entire production of this model is undertaken by one staff member.

The combination of light weight, stiffness and excellent hubs would ensure climbing performance would be limited only by the rider while the low-profile rims and gumwall tyres provided the correct visual match to the vintage frame. 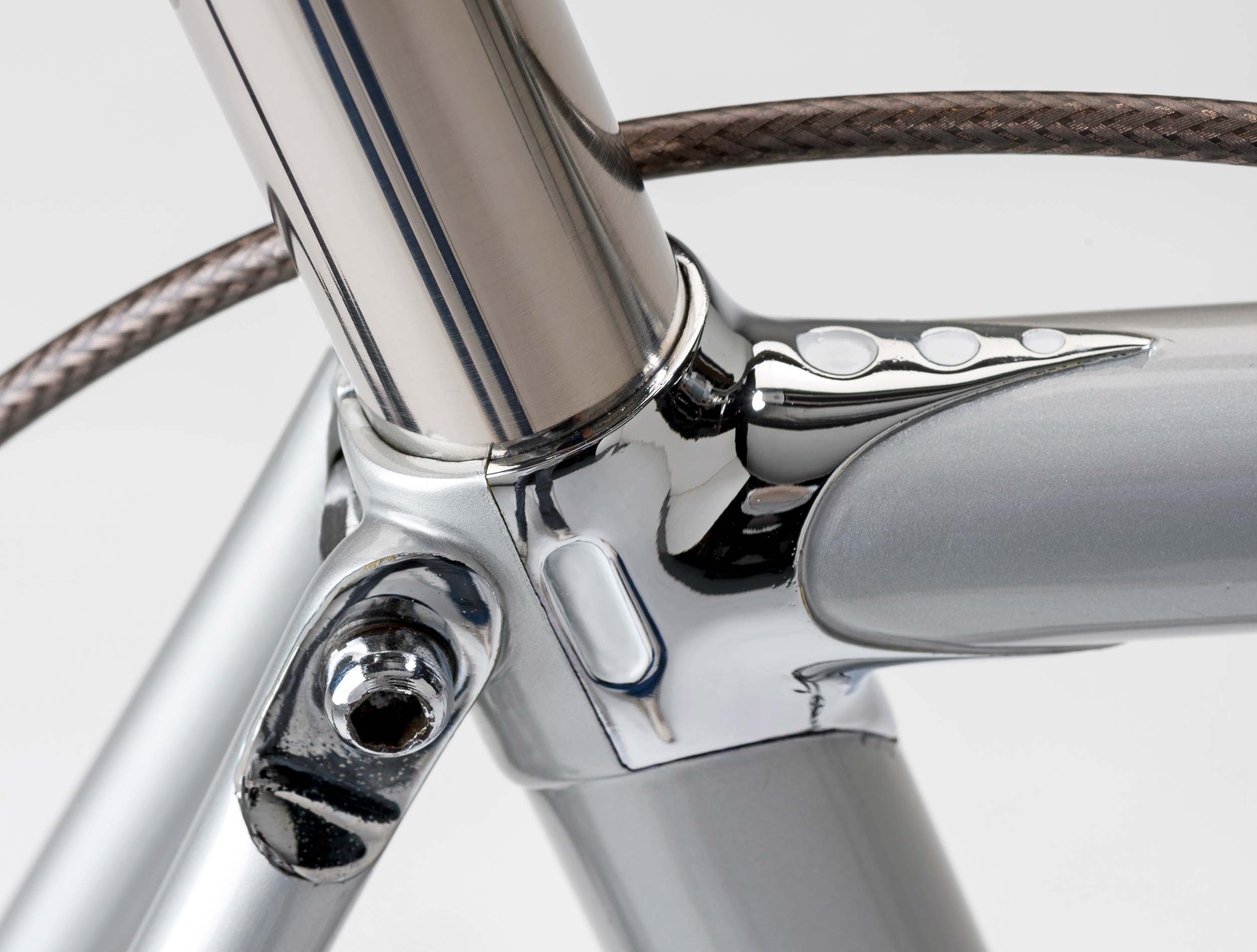 Components were specifically selected from companies with the prerequisite focus on small-scale craftsmanship and a passion for perfection.

The Brooks Cambium C15 saddle, Chris King threaded headset, and handmade Veloflex tubulars were sourced fresh from the manufacturers. The vintage 3TTT titanium stem and Deda handlebars were sourced from online collectors and given a mirror polished finish to complement the frame chromework. 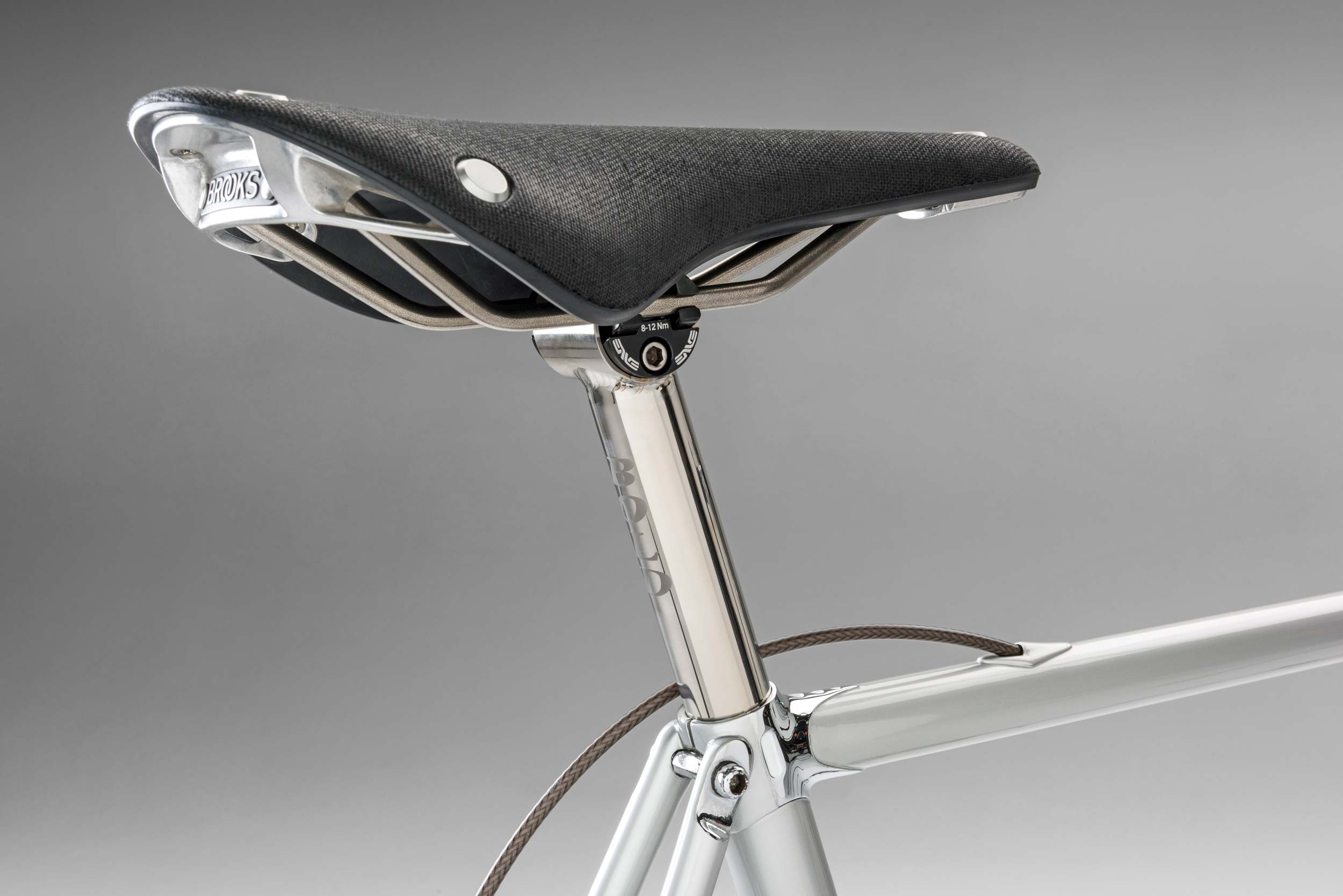 The most challenging and ultimately rewarding item was the seatpost.

Speciale Corsa frames of Cino’s era require an unusual 26.2mm. Instead of a traditional heavy Campagnolo I wanted a lightweight polished titanium post to match the stem.

After six months of unsuccessful enquiries around the world I stumbled across Albert Bold – an avid cyclist who operates a small fabrication company in Pennsylvania USA. When I described the project to him he was able to create a tube in the required diameter and was also genuinely excited about taking on the challenge and being involved. It was very fitting that this beautiful finishing piece was produced by a modern craftsman with a genuine love of cycling in the true spirit and tradition that the project sought to capture.

So how does it ride? Magically!

What is the story of your bike? 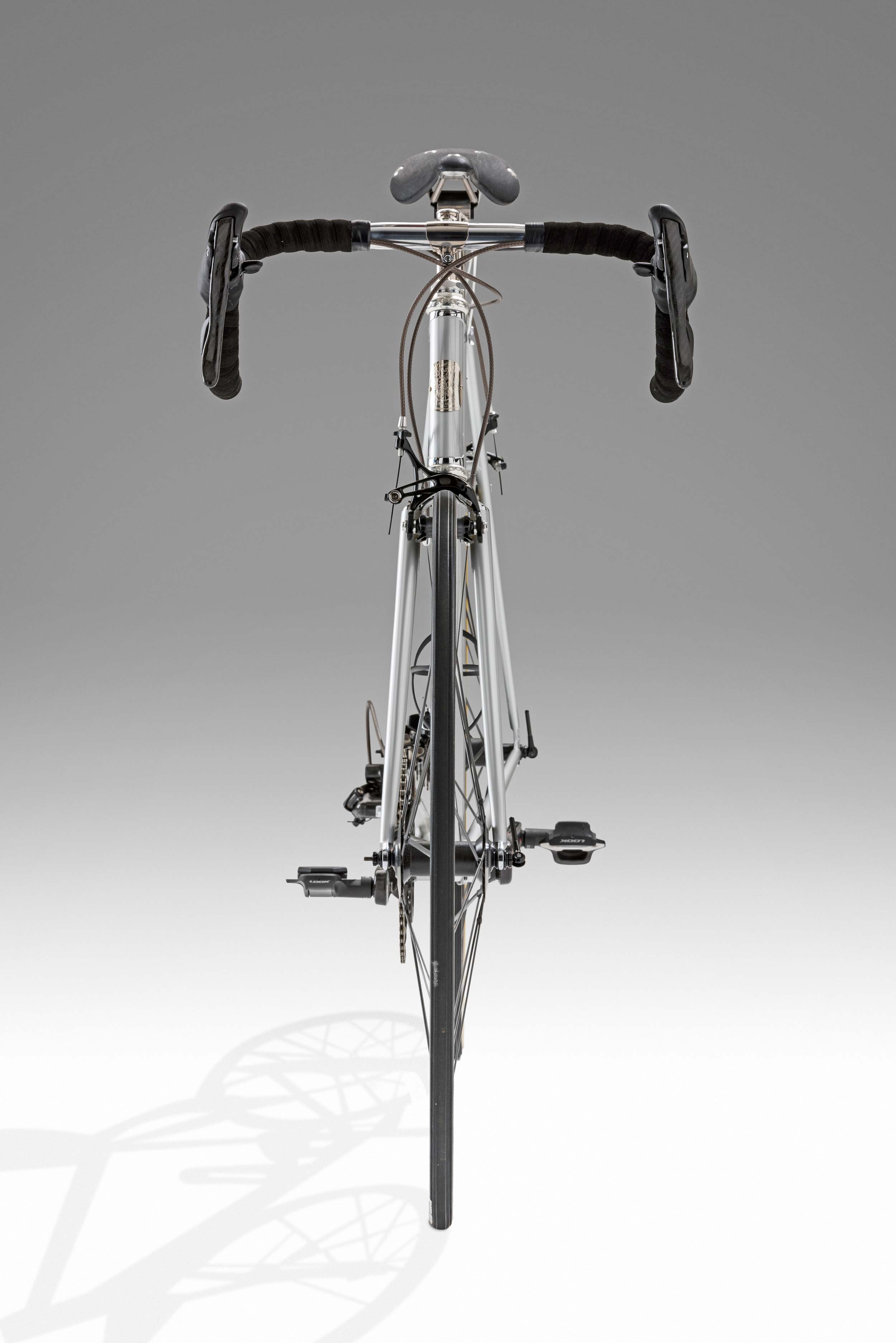