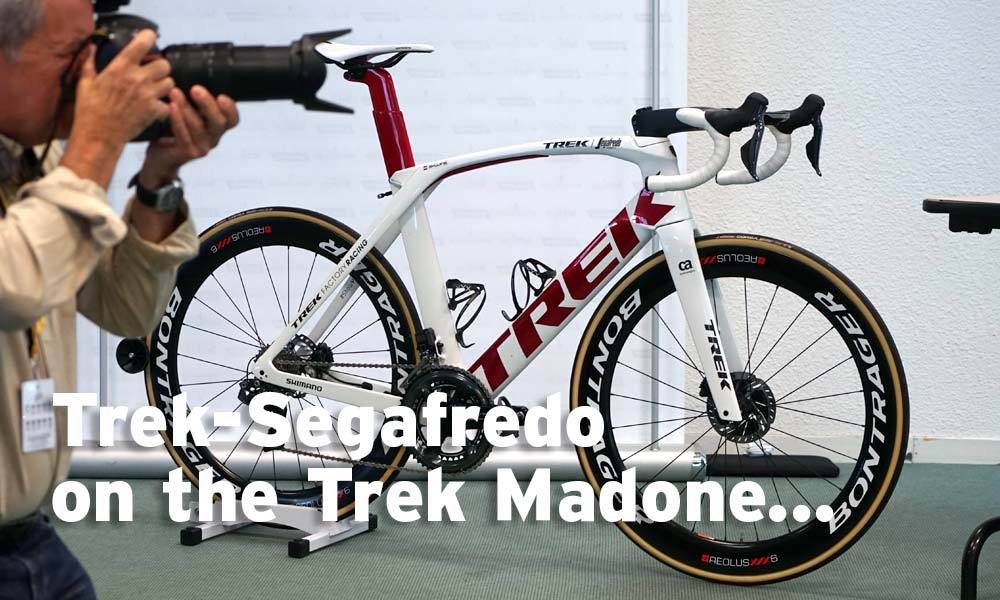 It’s hardly a surprise that July coughs up a few new bikes. That’s how it has been for a few seasons already and 2018 is no different…

Today’s the day you’re likely to see a lot published about a new bike from Trek; the US brand is officially launching a new iteration of the famous Madone. It was a similar scenario in 2017 when a new Emonda was introduced just before the Tour de France, only the big difference this time is that the new bike will be used in the race.

The Emonda has, of course, seen competition; the lightest bike in the Trek range was raced at the Giro d’Italia earlier this year – disc brakes and all, even in the mountain stages – but it didn’t get an outing during Le Tour in 2017.

Fast-forward 12 months and there’s little surprise surrounding the Madone launch. The bike has been on display in races already; at the Criterium du Dauphiné it was used by some of the Trek-Segafredo team. It’s difficult to ignore. A bright red frame, huge Trek logo on the down tube and, of course, disc brakes.

Visit the Trek site to find out more; the embargo is said to be ending soon (although we’re not exactly sure what time).

Take a quick look at Toms Skujins’ bike which was on display at the team media call on the eve of the Tour de France: click the link above.

As was explained at previous launches, new releases from Trek aren’t just new colours, spec and a few grams shaved off the weight. And although the Madone received an enormous makeover in advance of the Tour in 2015, it has been updated with plenty of new elements.

I missed the launch in the States this June (alas, as I learned how nice it is to ride the dairy roads of rural Wisconsin) but I was on hand at a (very small) media call for the Trek-Segafredo team on the eve of the Tour.

In a hotel only a few hundred metres down the hill from the site of the finish of the opening stage of the 2011 Tour, a small media contingent gathered to have a chat with Jasper Stuyven, Bauke Mollema and John Degenkolb.

“First question,” said the media officer. Silence. No one wanted to get things started… and so, I took the opportunity to talk about the bike. 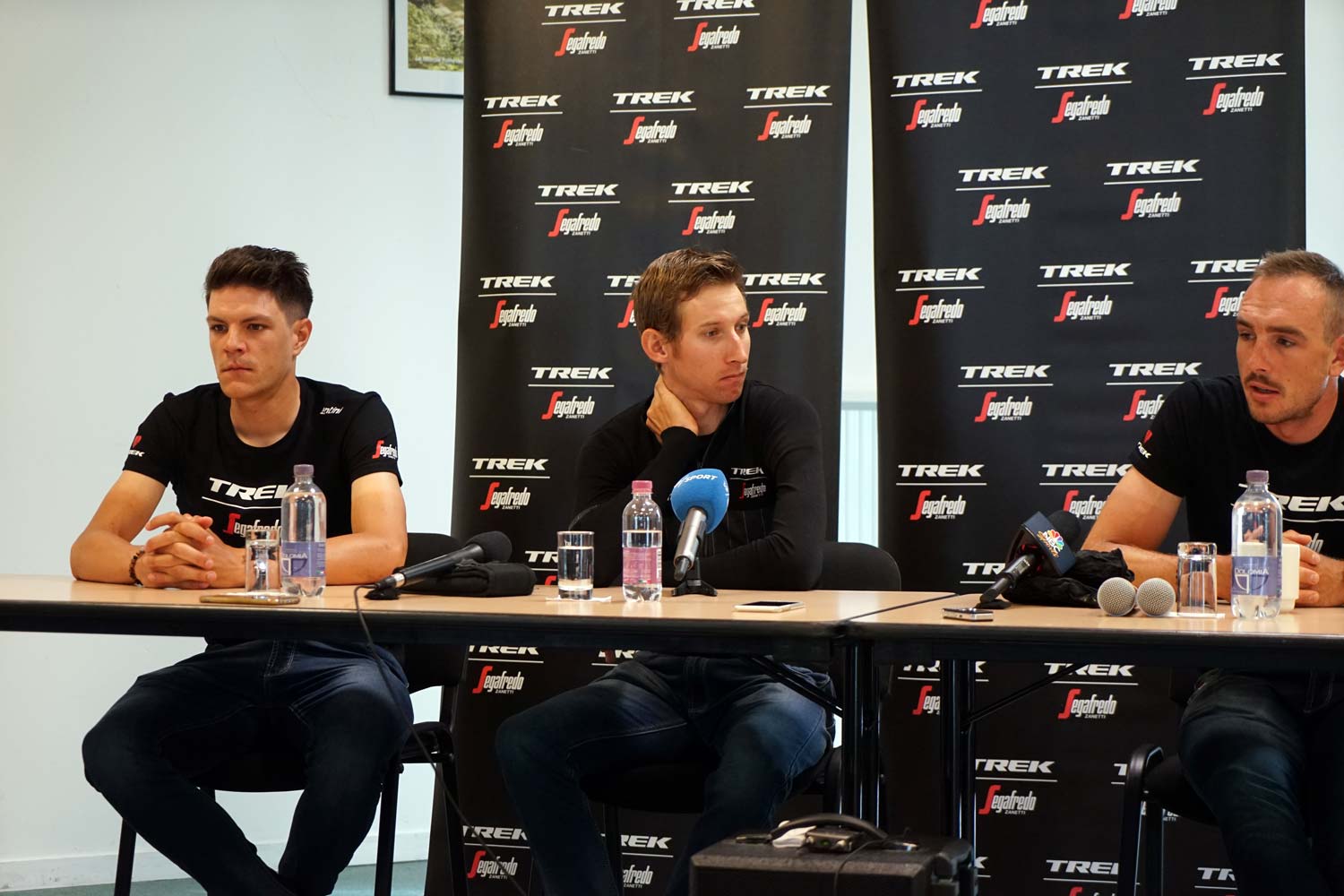 From left to right: Stuyvens, Mollema and Degenkolb.

The trio of riders looked at each other and eventually Stuyven responded with some commentary about the Madone. Beside them sat the bike that will be used by Toms Skujins at the Tour, which the riders occasionally pointed at while explaining the qualities of the Madone.

“There is a difference just going to disc braking,” said Stuyven, “and there was an adjustment there. We had to get used to it because we came from rim braking on the Madone at least.

“I think the handlebars are a big improvement… they’re more comfortable and fit better to the hands and I think everyone still feels it’s a really fast bike. The previous one was already fast and this is still at the same level although it has the discs.

“[With] the IsoSpeed [decoupler] we can play with it a little bit now, like we can do with the Domane. Of course on most roads we can just leave it at the stiffest [setting] but if you just slide it down a little bit… it might be useful to do for the Classics or rough roads to have a little bit more compliance. This is something we do feel, so it’s nice that we can still be on a really aero bike and get a little bit more comfort if we want to.

“I think it’s nice that we have been able to test the bike throughout the past year and give our feedback… the final product is something we are pretty happy about.”

None of that should come as a surprise: a rider racing for a team with a bike brand as title sponsor… and lo, he says he likes the bike. These things happen but it was still nice to put them on the spot in a setting when they were probably expecting to talk about the race, and get them to explain the product that was soon due to be launched.

Stuyven seemed sincere with his appraisal. Anyone who has ridden a Trek would likely appreciate that he wasn’t being too contrived: they arenice bikes and, as I learned in 2017, the R&D team in Wisconsin puts considerable effort into making a good product better.

But what about the effect of disc brakes in the pro peloton – not in relation to any of the purported risks that were such a feature of discussions about this product evolution only a few years ago, but in the circumstances of a puncture and the need for a wheel change?

Is there a delay, in comparison to how it is with bikes that don’t boast a thru-axle?

“So far I haven’t had a puncture on a disc brake bike so I don’t know,” replied Stuyven. “But I remember in Paris-Roubaix one of the guys had a puncture at the beginning – okay, it was not on the Madone, but on the Domane disc – and the change was really fast.

“Sometimes it’s a little bit slower but it’s not only the fault of the disc brakes, it’s also the how the mechanics manage the situation. They have to get used to it.

“I don’t think it’s going to be a big, big difference but of course the moment that not everything is fitting in perfectly, then you just lose more time than normally.”

John Degenkolb also added his thoughts. “The most important thing is to be very calm when you have a puncture,” said the German. “Do not shake because you have to put the thru-axle completely, 100 percent right. Do that, and it goes quickly.”

Mollema eventually broke his silence and added: “It takes a few seconds more but I think it’s worth it.”

The Dutchman is the leader of the team at the Tour. He won a stage last year and hopes for another good place on GC.

“I’ve already been riding on disc brake bikes for the whole season,” said Mollema. “On the Emonda – on the climbing bike – and now also on the Madone for the first week in the Tour.

“For me, the better braking is a big difference especially on the descents. I just feel more safe, in the rain especially. That’s a big advantage for me and if you have a flat tyre just a few times a year… okay, maybe it will cost a few more seconds but for me it’s definitely worth it.”

As was the case for the Emonda a year ago, the launch has been planned to coincide with a global release of the bike. The Madone with discs has been a long time in coming and it is one of the worst kept secrets of the bike launch season but it’s now ‘out there’ and, all going well with distribution around the world, you should be able to see it in your local shop as of Saturday.