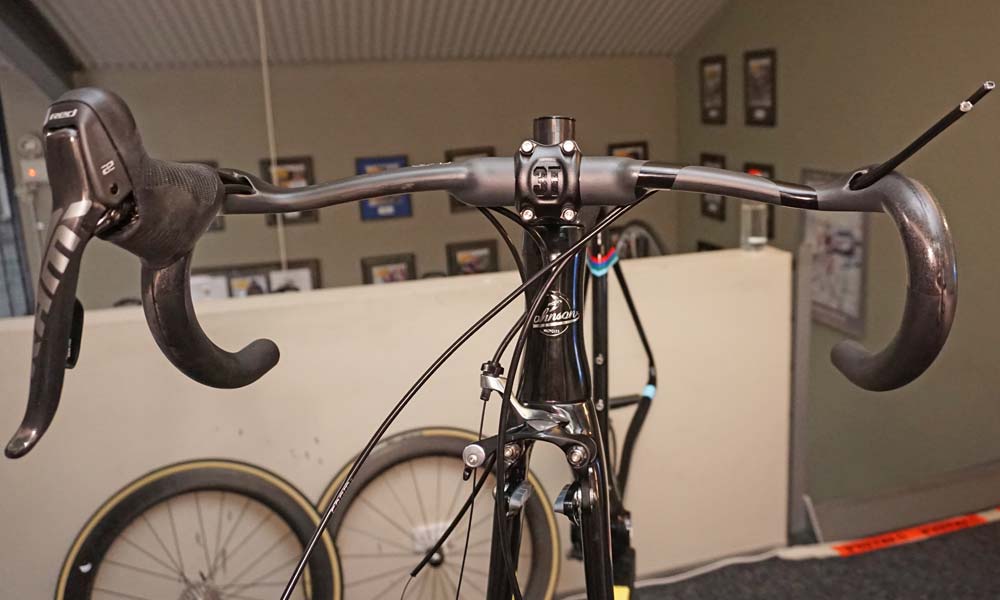 Our online ‘Build Reports’ continue to grow. This time a lovely looking race bike created by Ben Johnson. We take a look at how it came together in the workshop.

Those wishing to buy a Johnson are encouraged to contact the company via its website to discuss sizing and component selection. The idea is that Johnson owners can build their dream bike without compromise.

The bottom bracket mounted brake caliper does not detract from stopping performance but it does increase aerodynamics and compliance in the bike’s back end.

White Industry T11 hubs are a great match for these premium Featherlight wheels. They proved stable, tough and were quick to accelerate. These wheels are distributed by Johnson and were the perfect choice for the Riddler AR.

We take a closer look at the bike as it comes together.

See our Build Report and gallery of images below. 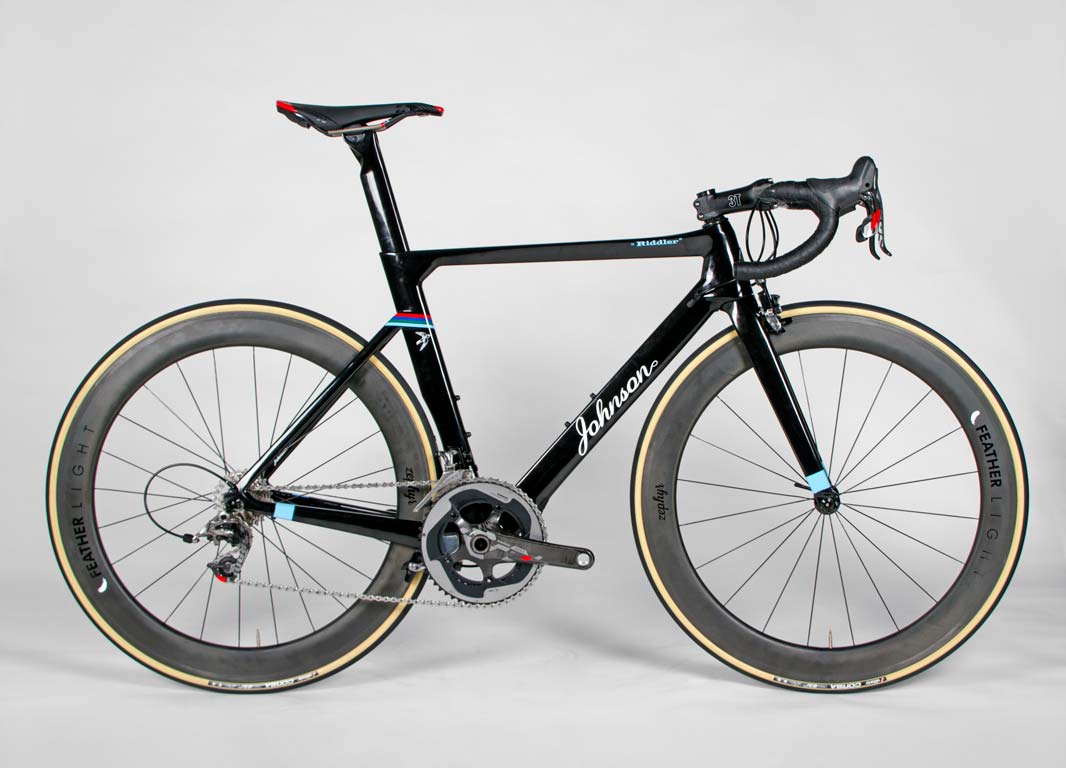 The Riddler is usually sold as a frameset but Johnson will also create a complete bike with parts selected by Ben himself or you, the customer.

It’s simple and elegant yet unmistakably fast! Seeing this complete package is proof that aero road bikes can be beautiful. Imagine how good it would look with the new dark SRAM graphics on the cranks, shifters and derailleurs!

All bikes in Johnson’s fleet have the swallow motif somewhere on the frame. It gives a cool identity to a brand that’s young but evolving rapidly and it is neither nautical nor prison related. Perhaps the idea is that a Johnson frame lets you nimbly fly wherever you wish.

Tan-walled tyres are experiencing something of a resurgence in the market and when looking at a bike like this it’s plain to see why. 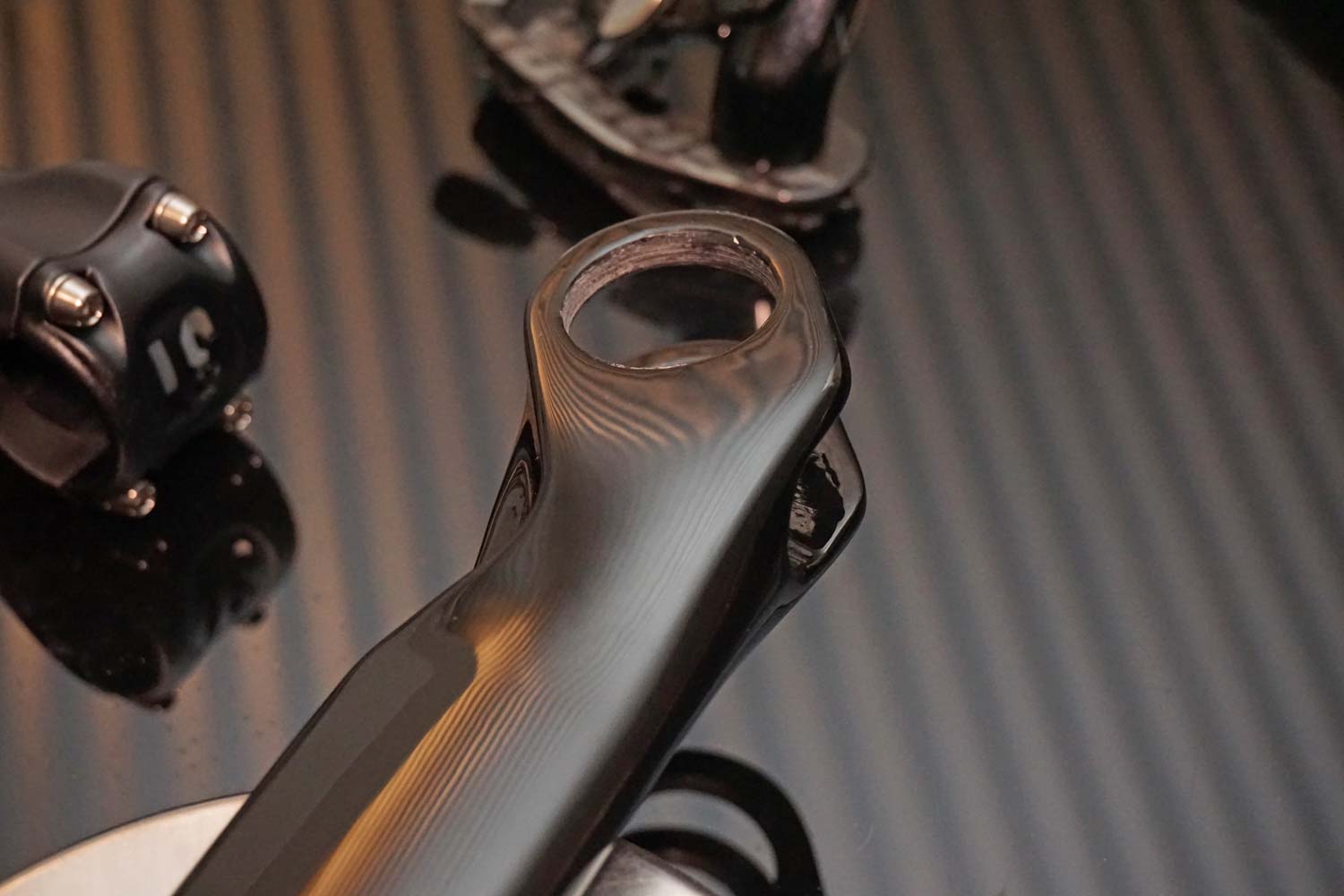 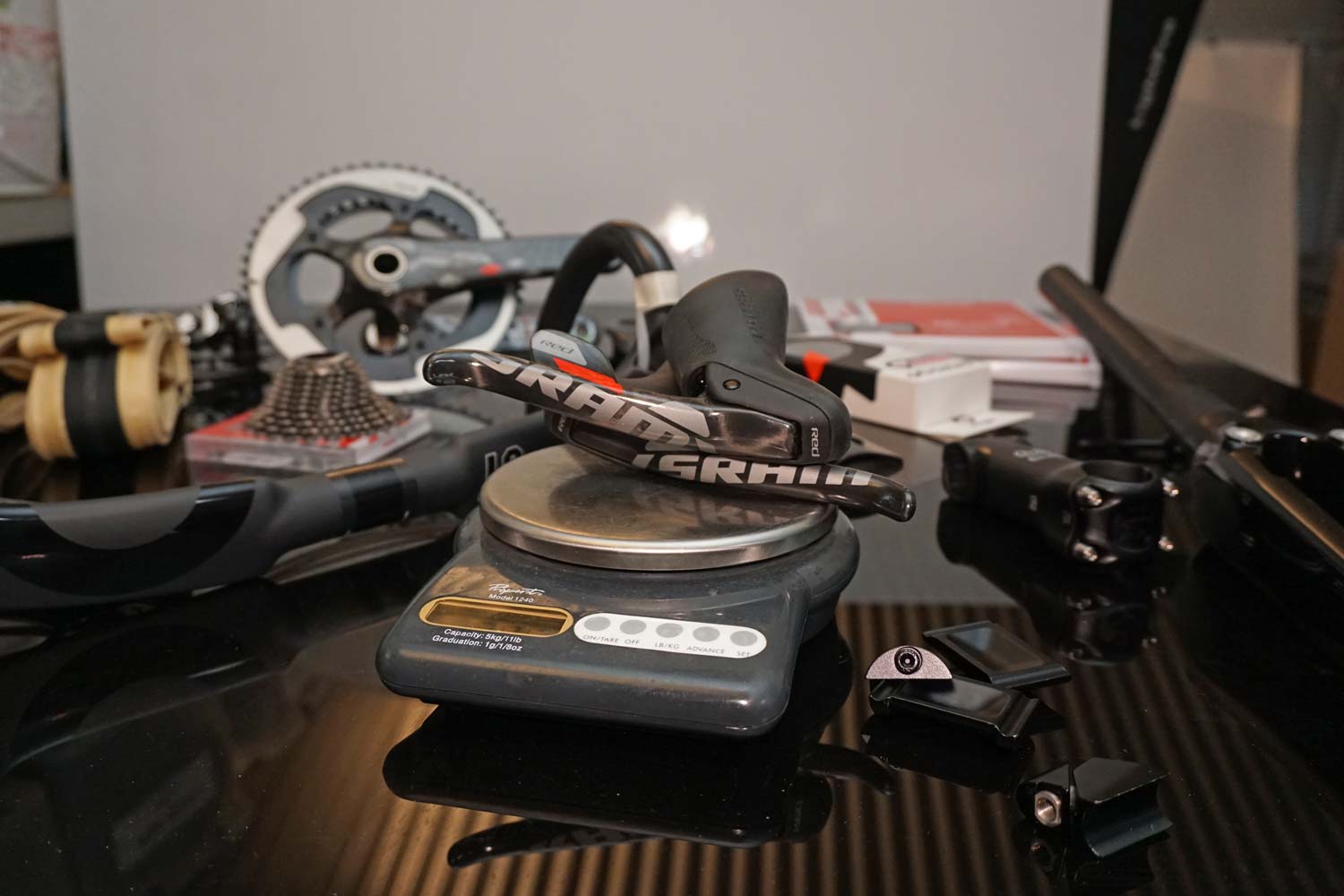 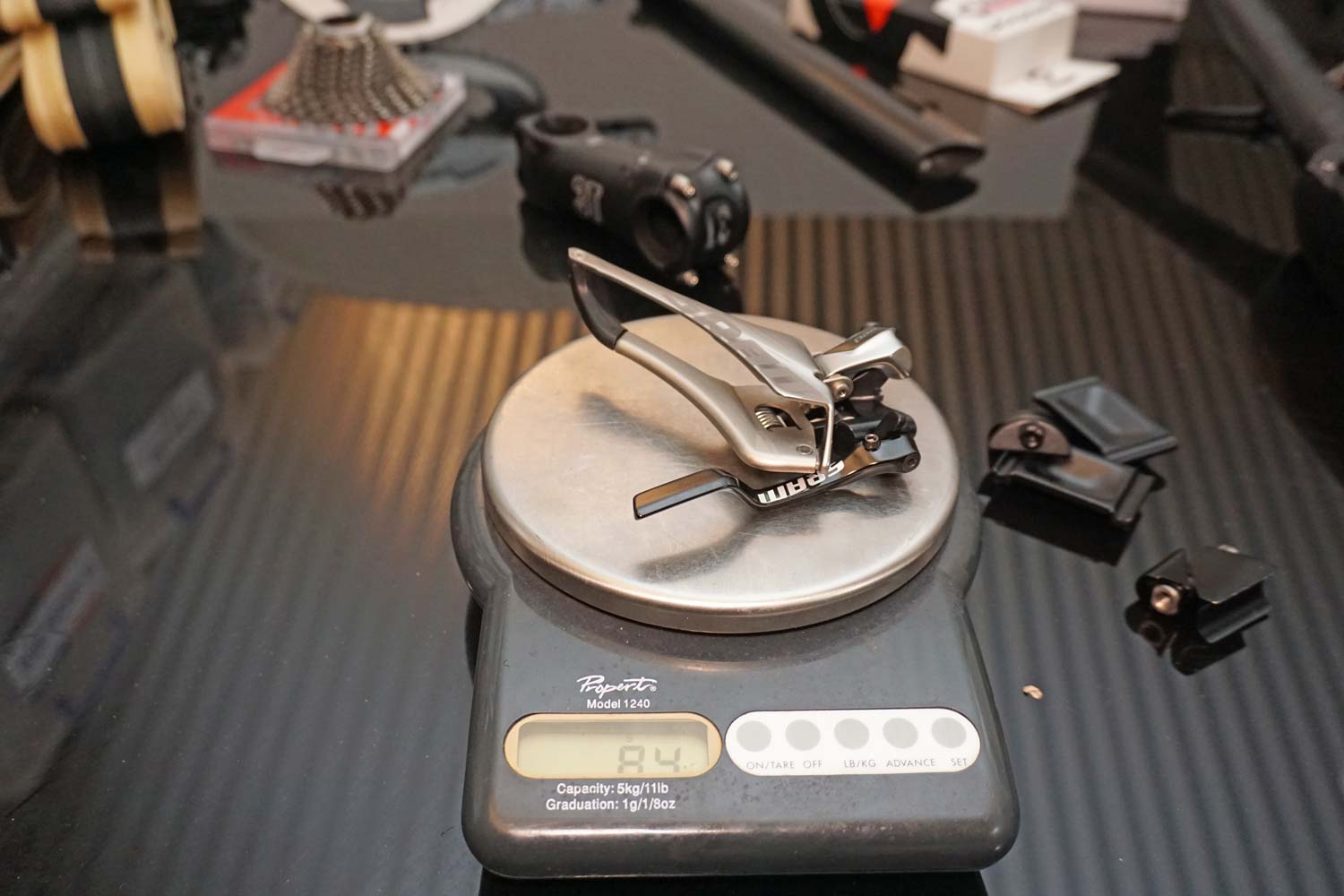 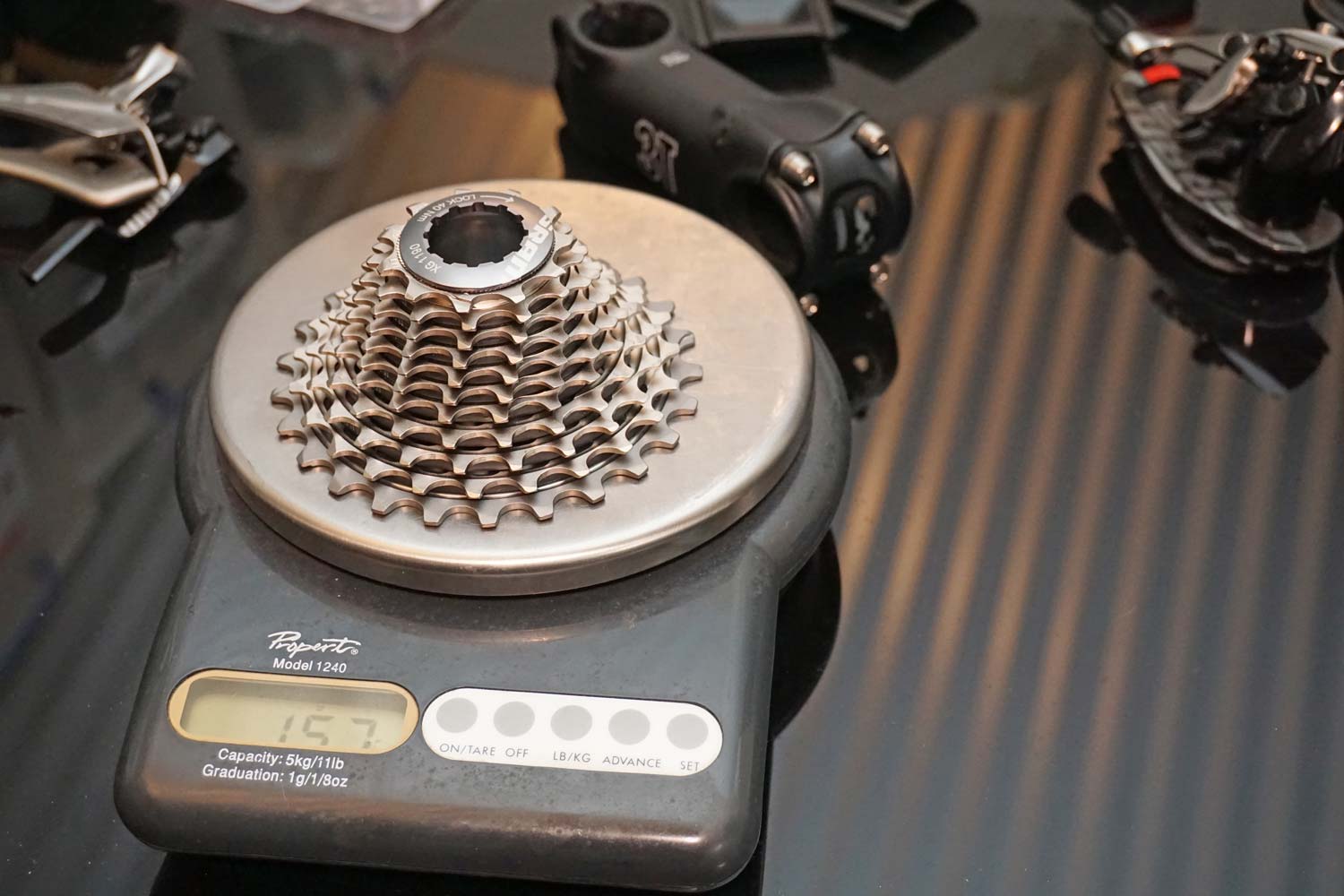 As far as aero road bikes go, the Johnson Riddler AR is a straightforward build. There is no irregular headset or proprietary brakes, just modern standards. This bike has a pressfit bottom bracket and internal cables as well as a cool aero seatpost.

An organised, experienced mechanic will have no trouble building this bike.

In a departure from the norm, the Riddler’s forks did not have an integrated carbon crown race. Instead, an alloy race had to be bashed onto the 1-1/2” crown. This used to be the standard operation for any headset but is fairly unusual on today’s high-end carbon frames.

Mainstream brands usually fit an integrated crown race on their proprietary forks. (The only 1-1/2” steerer tube that has had a separate alloy crown race that RIDE has reviewed in the last two years was a De Rosa.)

Fitting a crown race requires another tool in the shed but makes the headset feel great.

The feel of a metal crown race on the metal headset race is very smooth. Everything is machined and, with a smear of grease, there is very little friction. It also means that aftermarket forks can be fitted if the bike is ever in a crash and requires new ones. 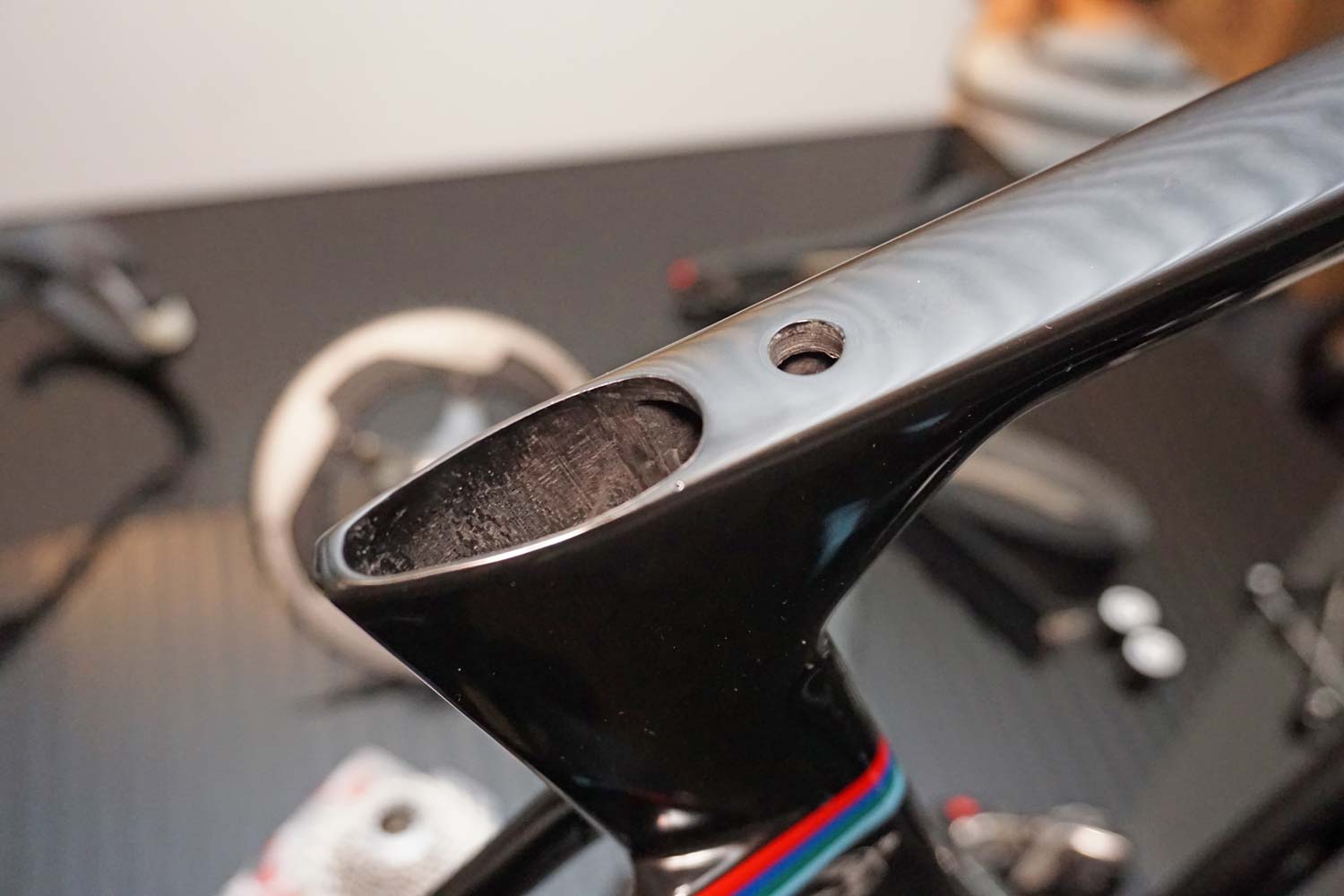 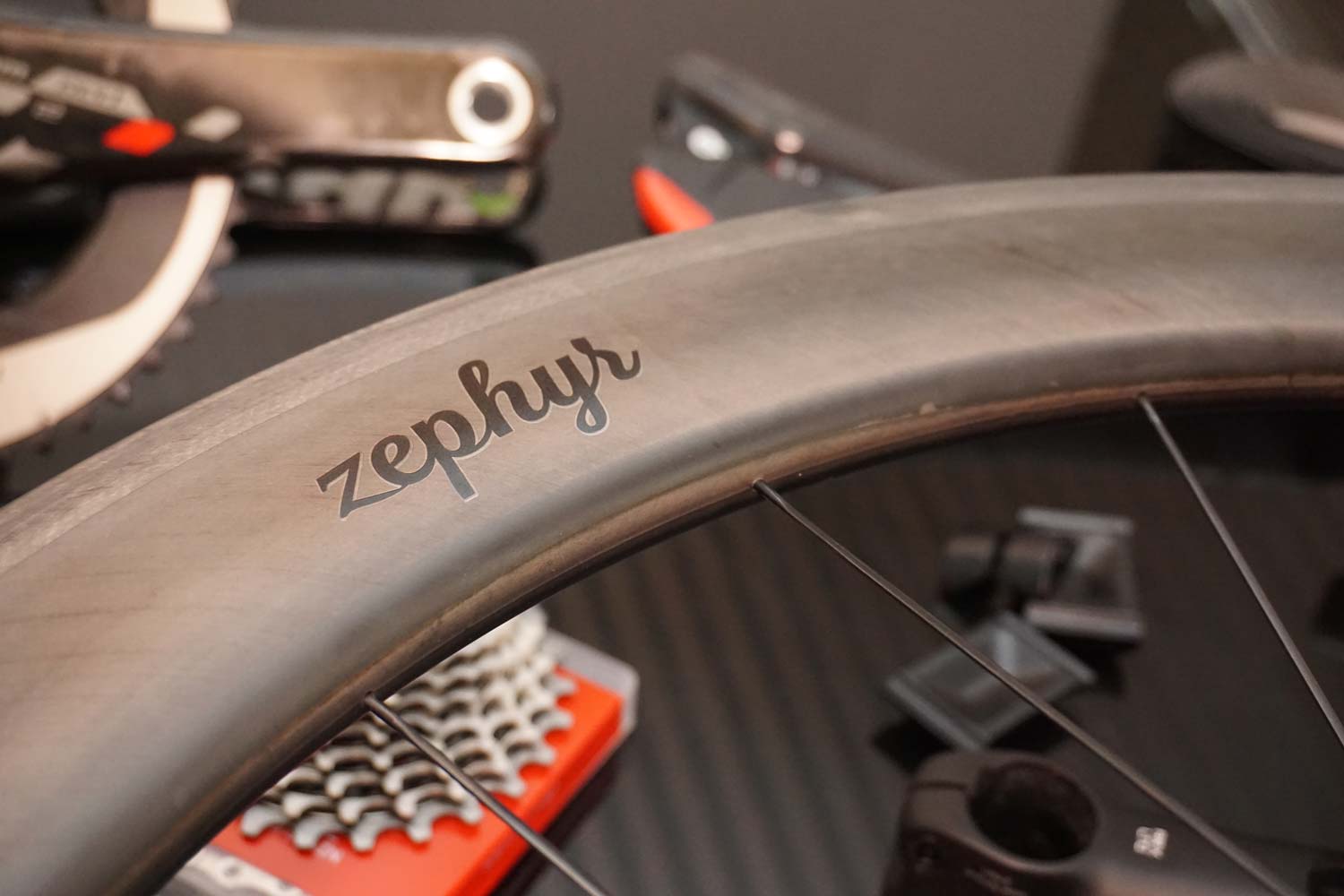 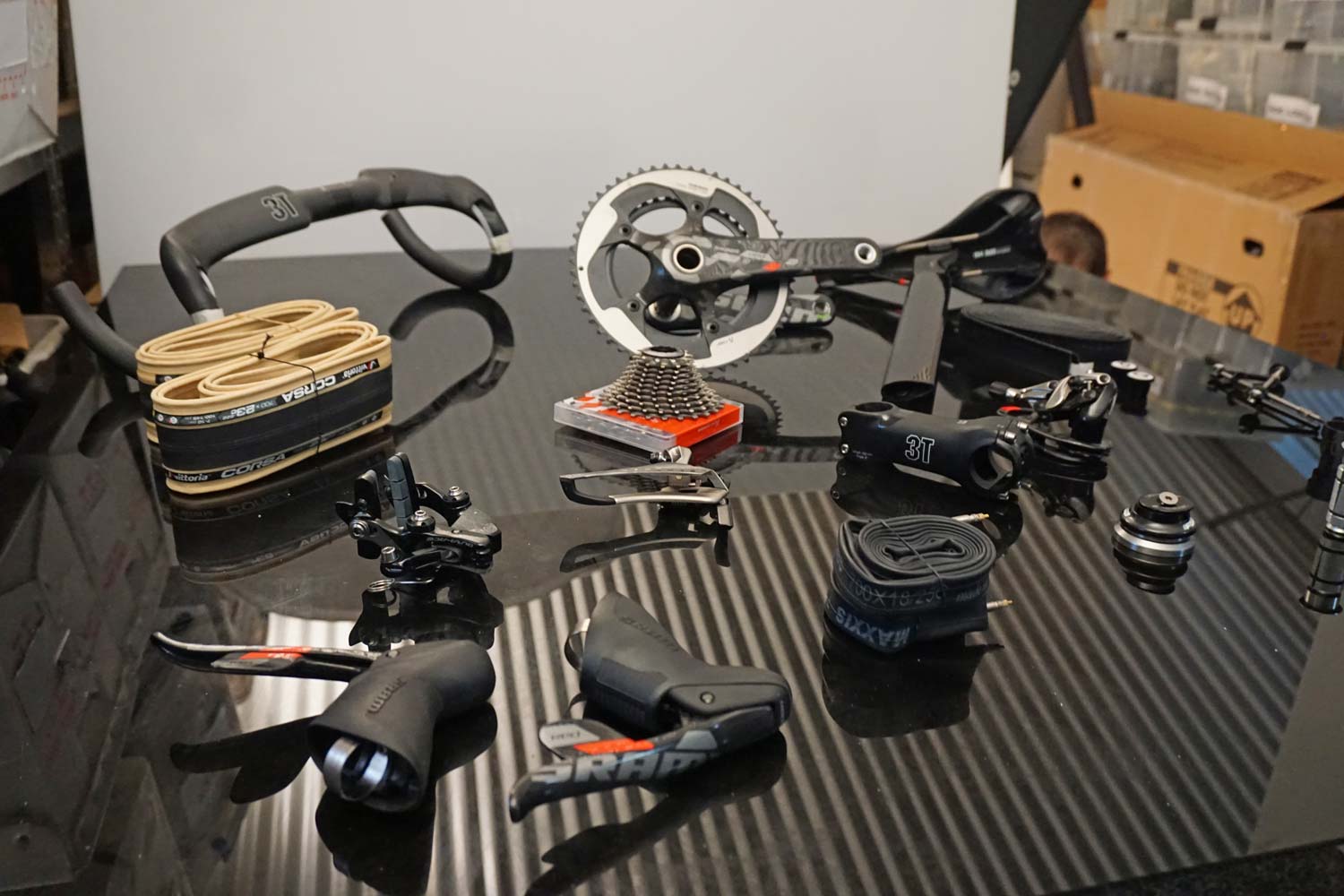 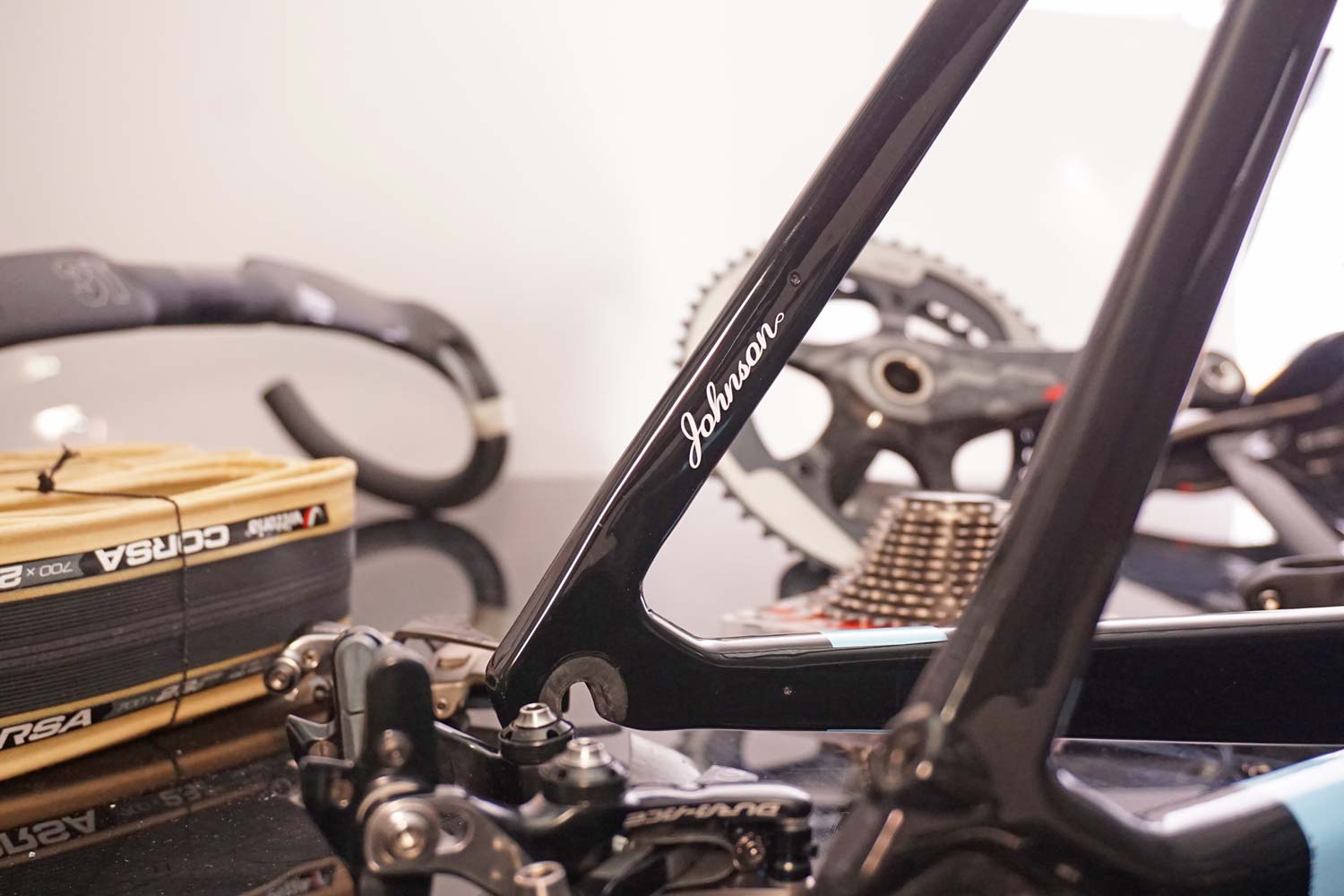 Scroll to the bottom of the page for a full list of components and weights.

The forks are relatively light, especially for a bike with direct-mount brakes. They had an easy steerer tube to cut – not too flimsy and not too firm.

The ferrules for the brakes were clean and the dropouts for the front wheel were carefully machined, inspiring confidence that they will hold the wheel tightly when it’s being ridden hard.

Routing cables through aero handlebars always takes longer than a regular handlebar and these 3T Aeronovas were no different.

When using electronic ensembles there is no problem but the 5mm brake and 4mm gear outers have a bit of trouble squeezing through the openings. This takes a bit longer to route and reduces shift quality because of all the twists and turns required. 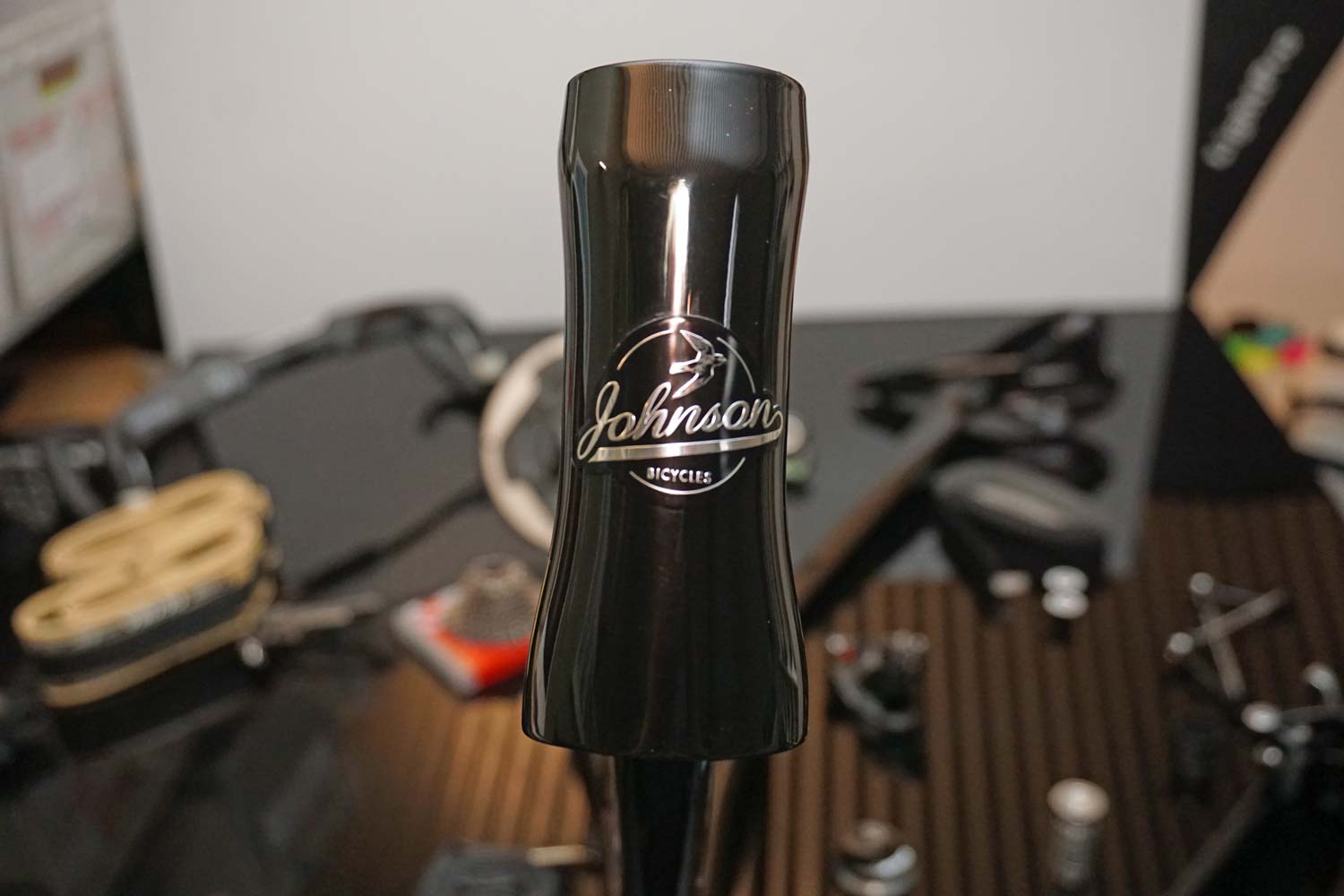 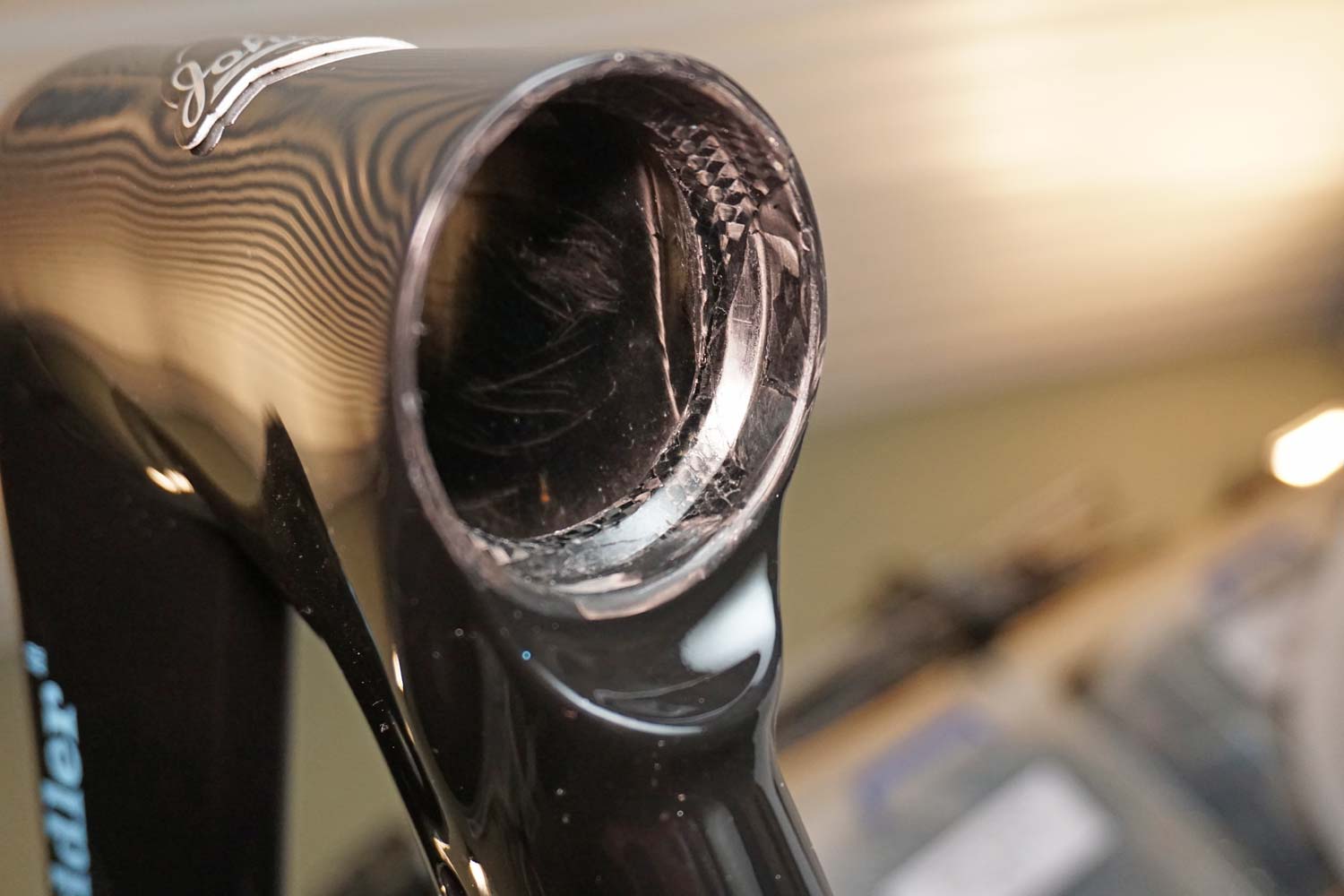 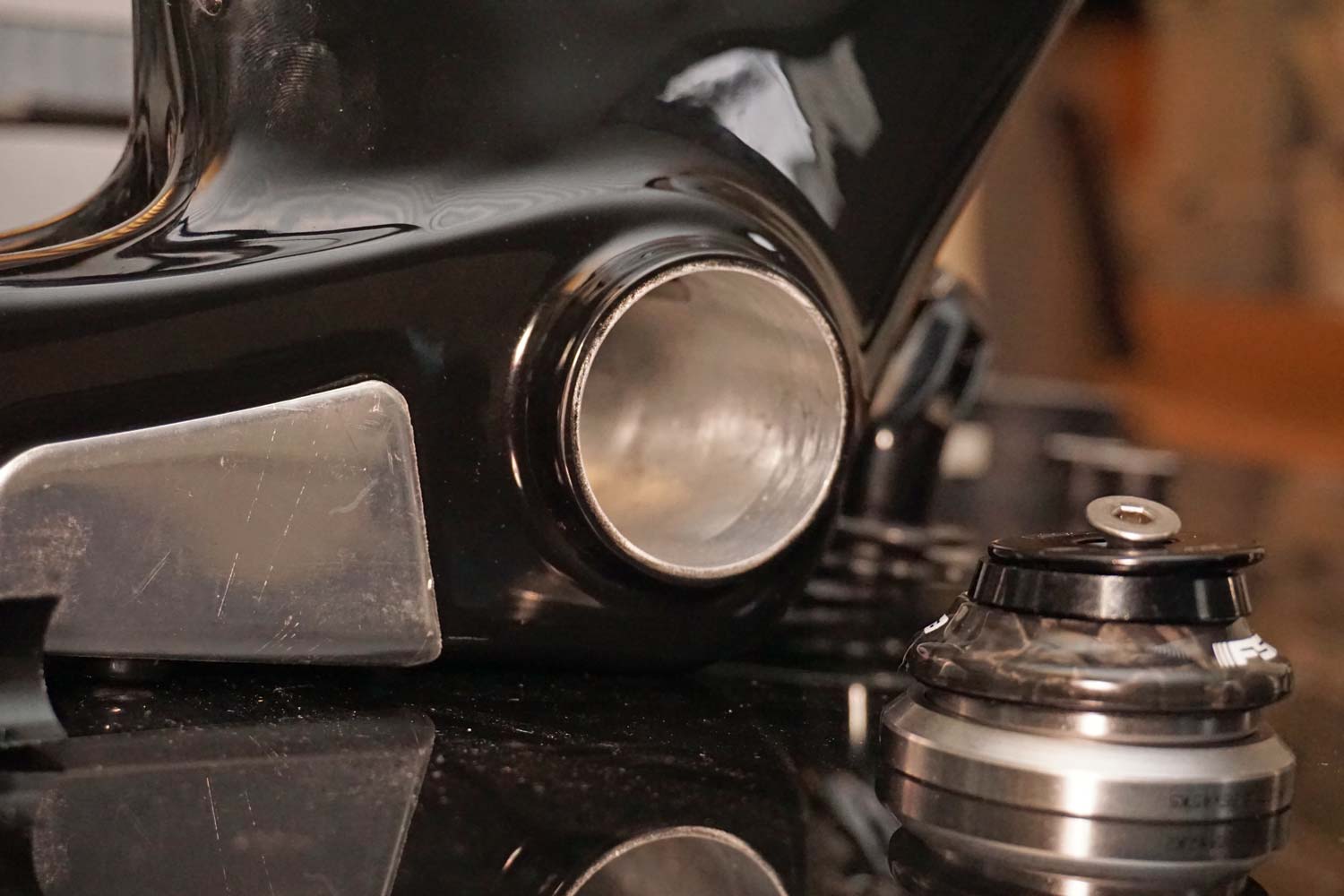 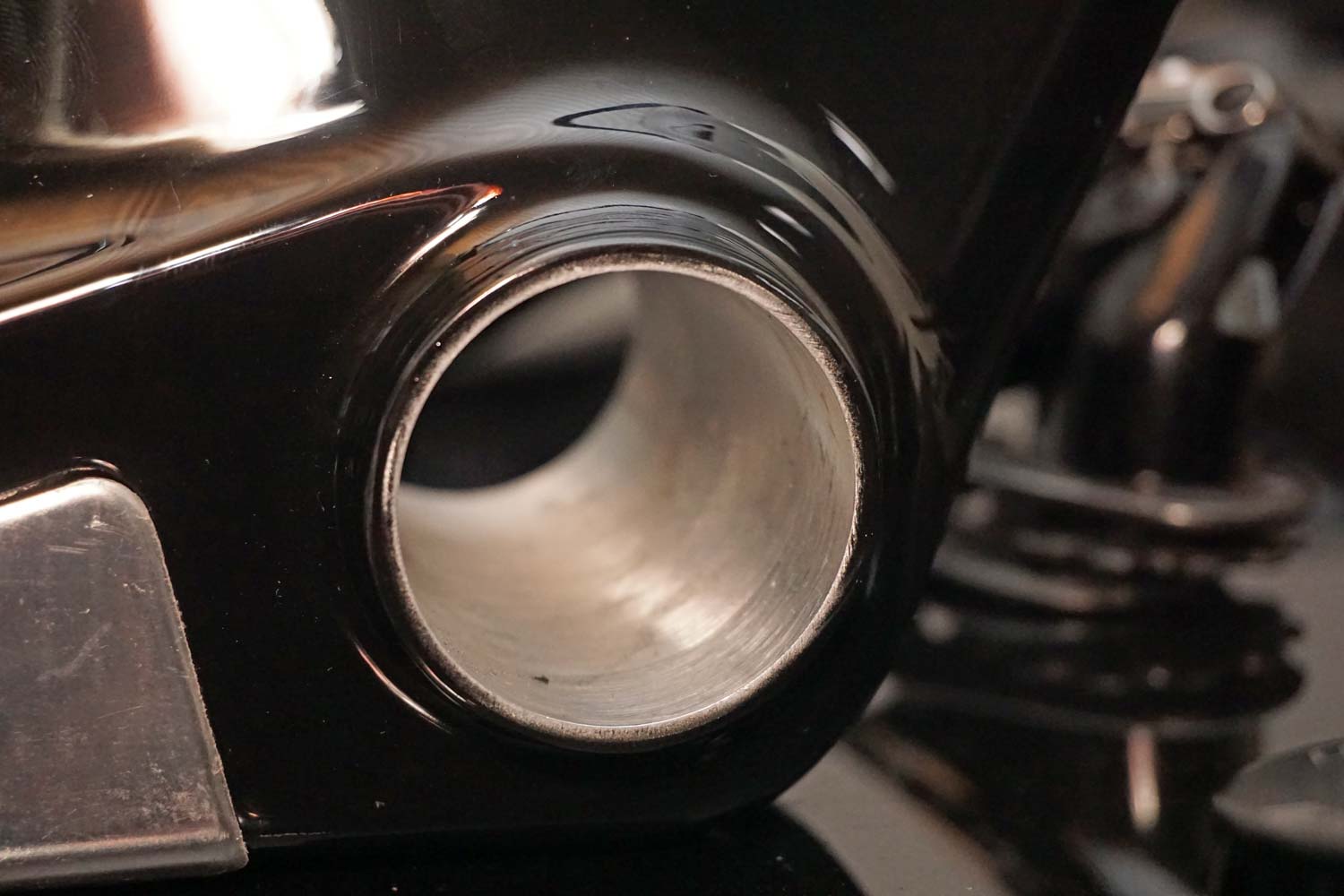 The aim of the Build Report is to provide an overview of the bike… inside and out.

From seatpost to bottom bracket

The Riddler AR’s aero seatpost is a very nice element. It is fastened with a hidden wedge that sits neatly inside the top tube.

Owners must be careful when removing the post as the wedge is loose and it could easily fall into the frame. There is a chance of water pooling in the deep bolt too so finding a rubber grommet to seal over it is suggested.

Johnson opted for a pressfit 86 BB which is suitable for any of the major groupset manufacturers. A SRAM GXP bottom bracket equipped with ceramic bearings was provided by Ben for this build. 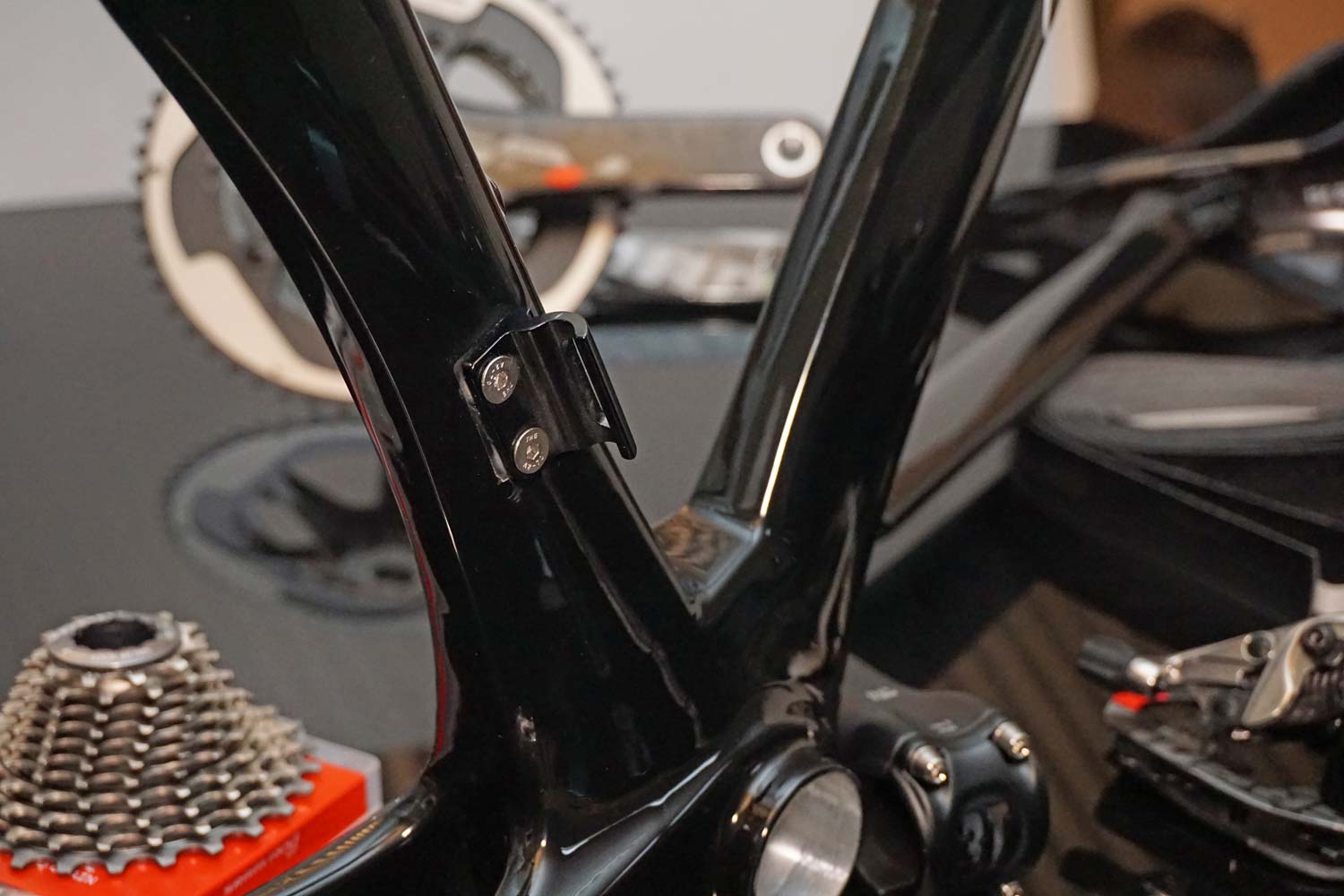 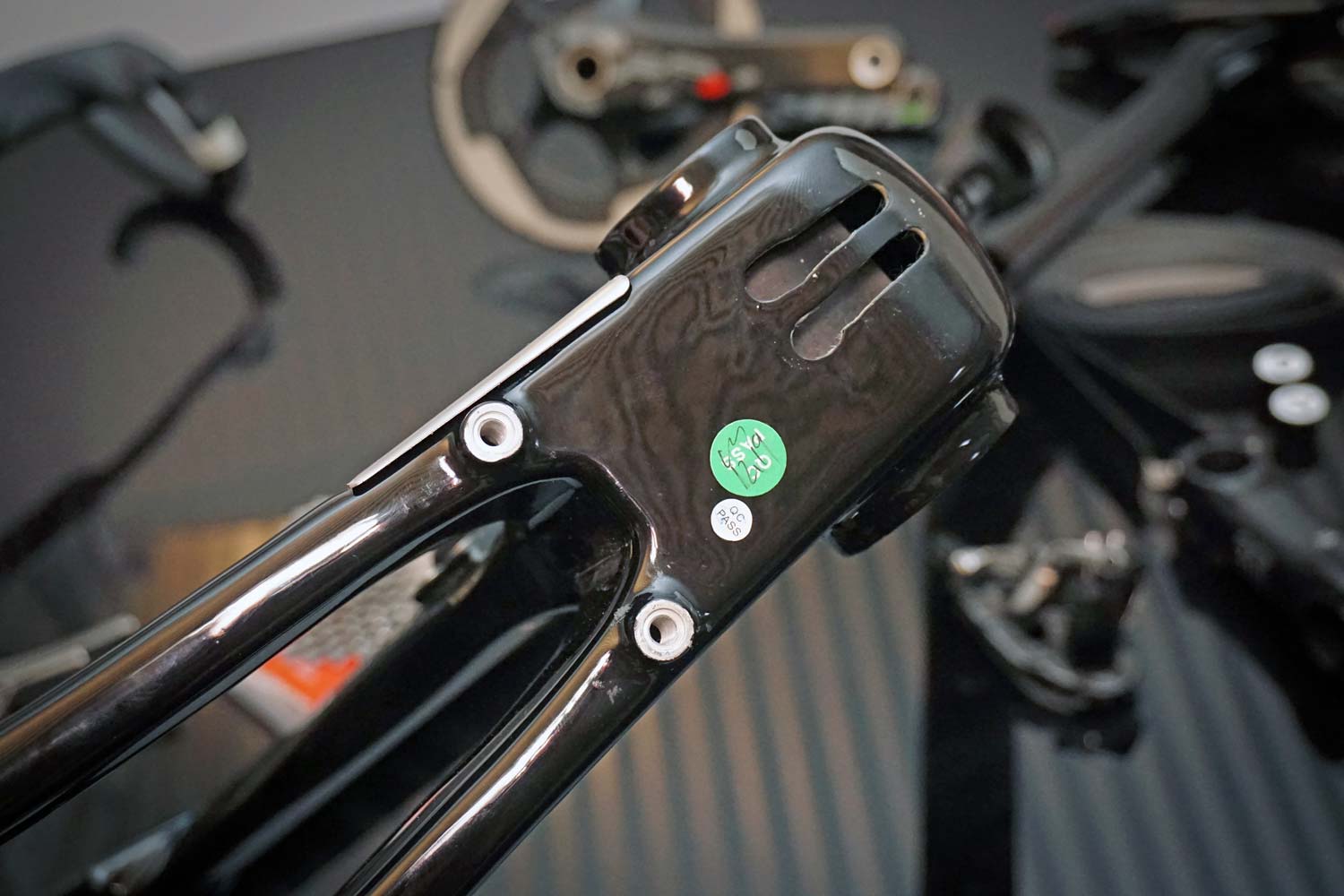 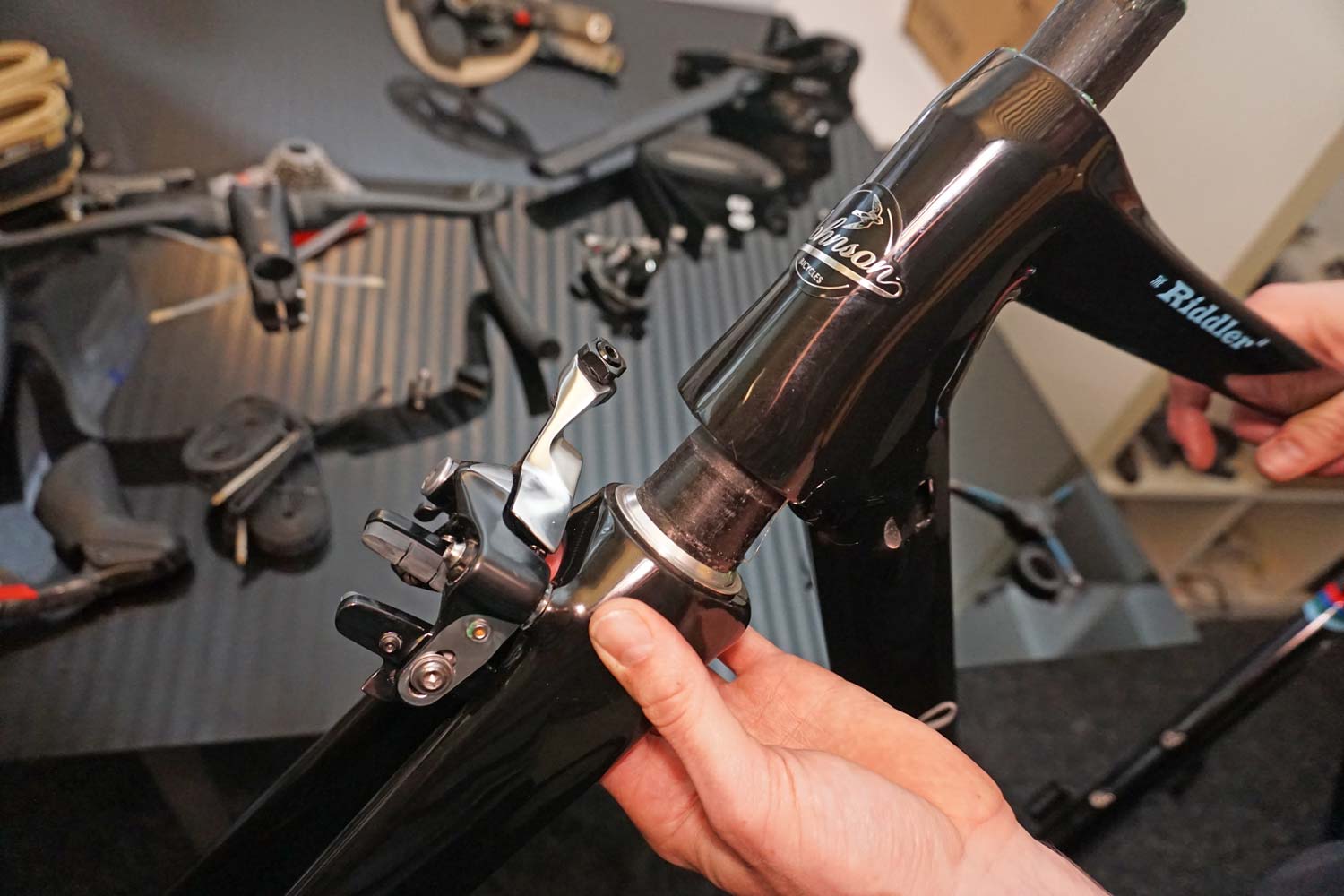 Johnson has been refining his bikes and there are more in the catalogue than the Riddler alone… and the owner/designer is always willing to offer suggestions on product spec, colours and even frame style.

It’s not yet a retro novelty to build a SRAM groupset with cables but that comment won’t be far off. SRAM Red 22 is great but there are a few things in this bike that may slightly detract from shift performance somewhere down the track.

First of all, the 3T handlebars don’t allow the mechanic to position the outer cables in the desired position which can increase friction and make the shifting feel a little sluggish.

In addition to this, all the cable hardware is a fairly brittle plastic that could flex and move when under shifting loads (think of the amount of force it takes to throw the chain into the big ring).

On an 11-speed system, millimetres make a difference and correct cable tension is vital to a crisp and consistent shift. The exit point of the rear derailleur’s cable is through a plastic ferrule that actually moves up and down in the frame.

This could be bad news but it’s likely that a correctly tensioned SRAM rear derailleur will shift fine regardless of the relatively basic frame hardware.

Although it is unlikely that these slightly questionable elements affect the bike in any practical way, they are still a little concerning and could conspire against a rider after a few kilometres in the saddle.

Unfortunately, SRAM is yet to make commercially available direct-mount brakes and so Johnson has found an alternative for the Riddler AR.

Interrupting a full ensemble for the test bike Shimano is used and the resulting stopping power is worthy of strong praise. (The same approach is used by Katusha, sponsored by SRAM but using Dura-Ace direct-mount brakes on its Canyon Aeroad bikes.) 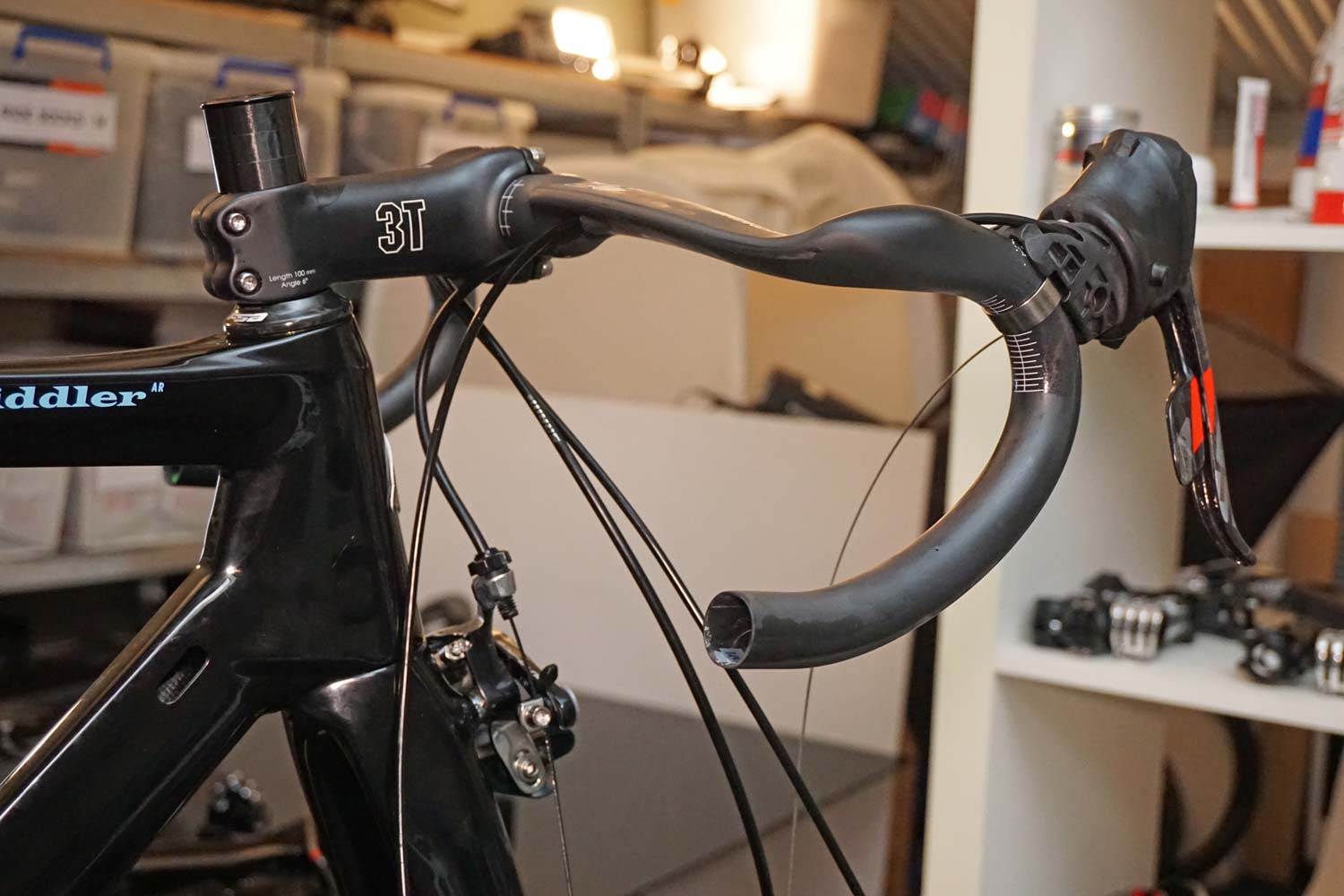 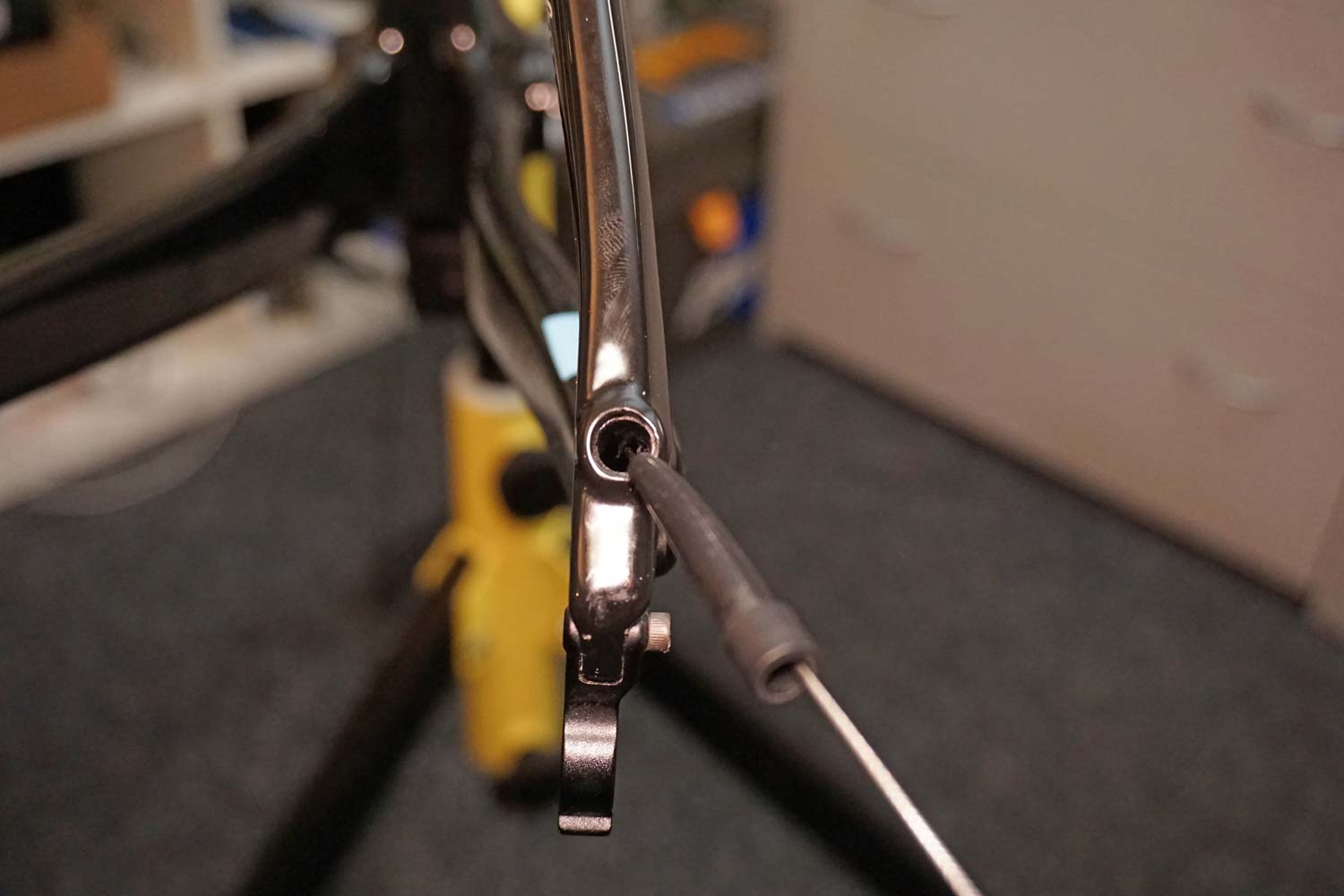 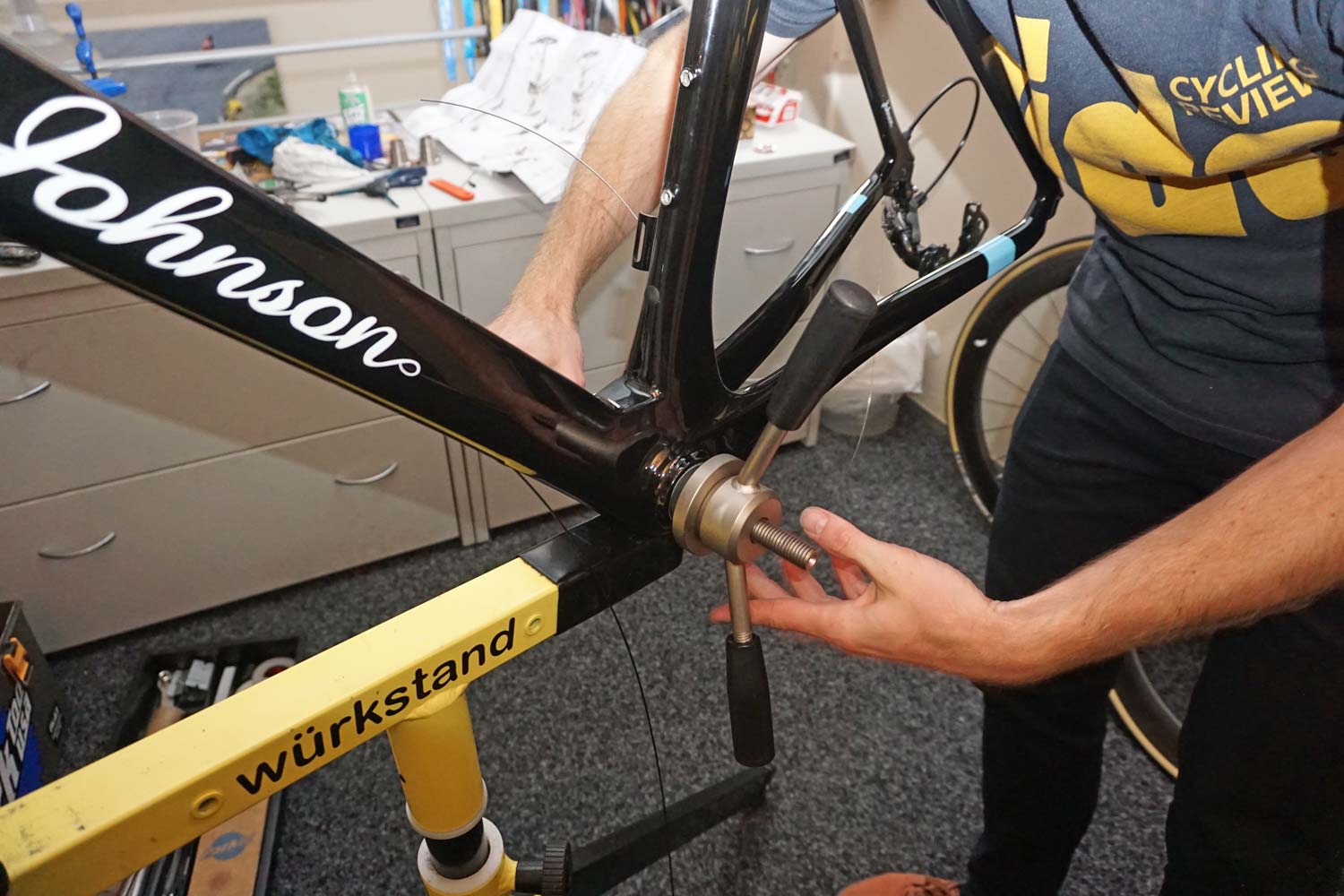 Ignoring the tricky lacing required for the handlebars, cables were easy to prepare. The plastic frame hardware – although potentially perilous – was easy to remove and left a large void to easily thread the brake and gear cables through.

The rear derailleur cable had a slightly difficult upturn as it followed the chainstay to the exit point. There was little stress as the cable chased a magnet all the way through and popped out the other side.

There were no curly issues during the build. The bottom bracket mounted rear brake can sometimes throw up a couple of headaches but it was not the case this time. The wheels needed a slight true but were still rideable out of the box.

The Riddler AR has a nice thick paint job that seems pretty hardy. However, some of the paint intruded on the bottom bracket cups and two of the bidon screws were disconcertingly tight to make the owner second guess themselves as they fit their cage! It is a colour palette that will suit those who appreciate a classic aesthetic and bright colours will eventually appear.

SRAM Red is a fantastic groupset and these carbon wheels, whilst untested, have a bulbous profile that should make them stiff and stable. 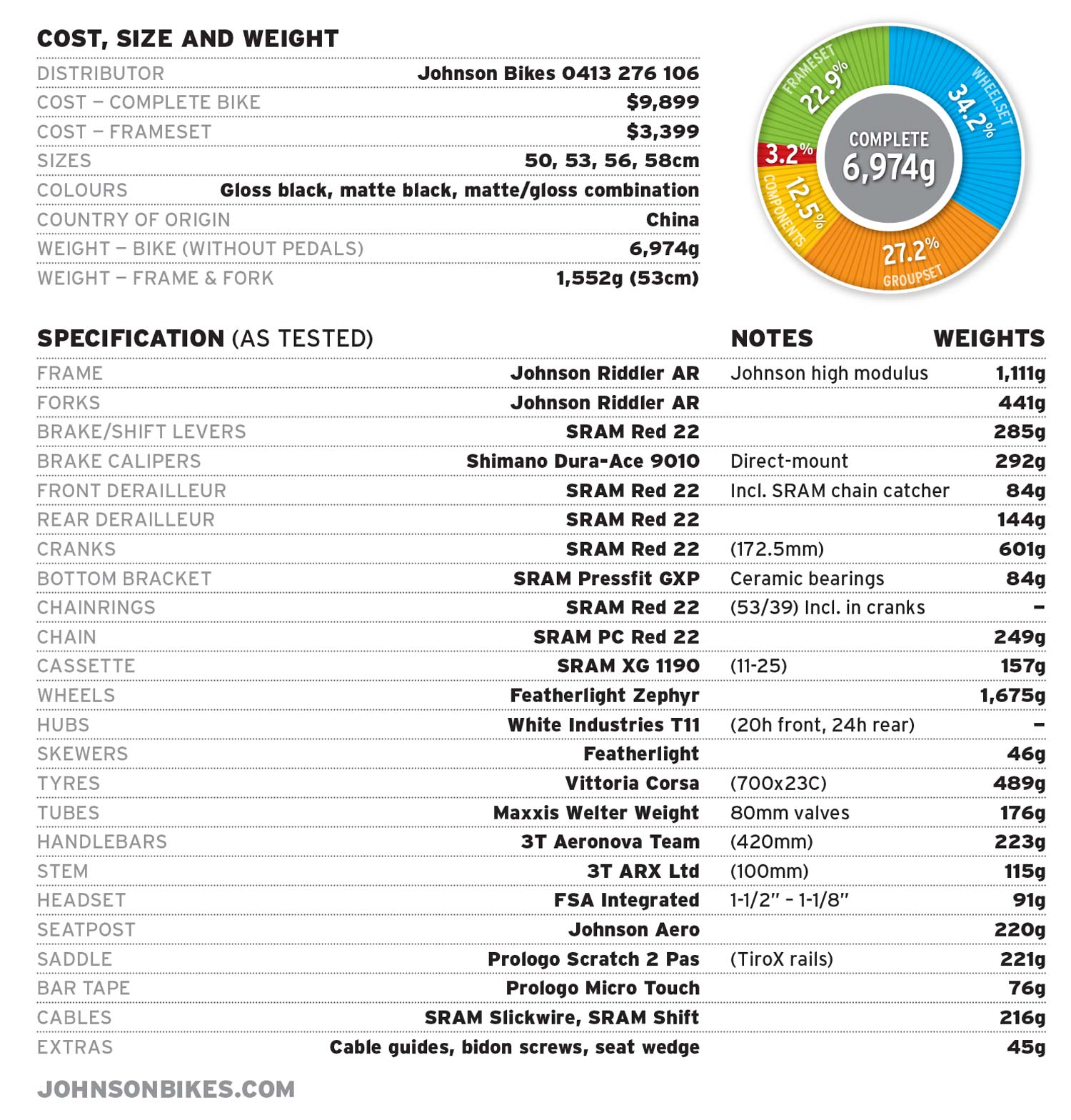