Find out more about a revolutionary new bike design that’s making headlines. We talk to Adam Hansen about his ‘Hanseeno’ project – a complete rethink of what a bicycle can be.

Concept bikes are nothing new. They come and they go, rarely seeing more than the showroom floor of a cycling expo. Occasionally, however, some make it through to production, racing even… and, very rarely, they achieve success in competition.

The most original thinker in cycling is surely Graeme Obree who pioneered revolutionary new positions for bikes he created from scratch. He achieved remarkable feats thanks to his outside-the-box thinking. Alas, his inventive approach was considered too extreme… a couple of times, and the UCI banned the bikes (and the riding positions) from being used in cycling competitions.

Since the Obree years, there’s been plenty of innovation in bike design, usually within the confines of the UCI regulations but not everyone has to adhere to the whims of cycling’s governing body. In triathlon, for example, there’s scope to push the envelope and conjure designs and riding positions that provide aerodynamic benefits beyond what is allowed in cycling.

After a long stint as a pro cyclist, Adam Hansen has gone back to the drawing board. The 39-year-old Australian sporting pioneer began his competitive days as a triathlete, then a long-distance MTB racer, and onwards to an impressive, record-breaking cycling career.

He’s back in the news in 2021, a few months after his farewell race in the pro peloton and RIDE Media caught up with him to find out more about the Hanseeno bike project that is attracting attention around the world. 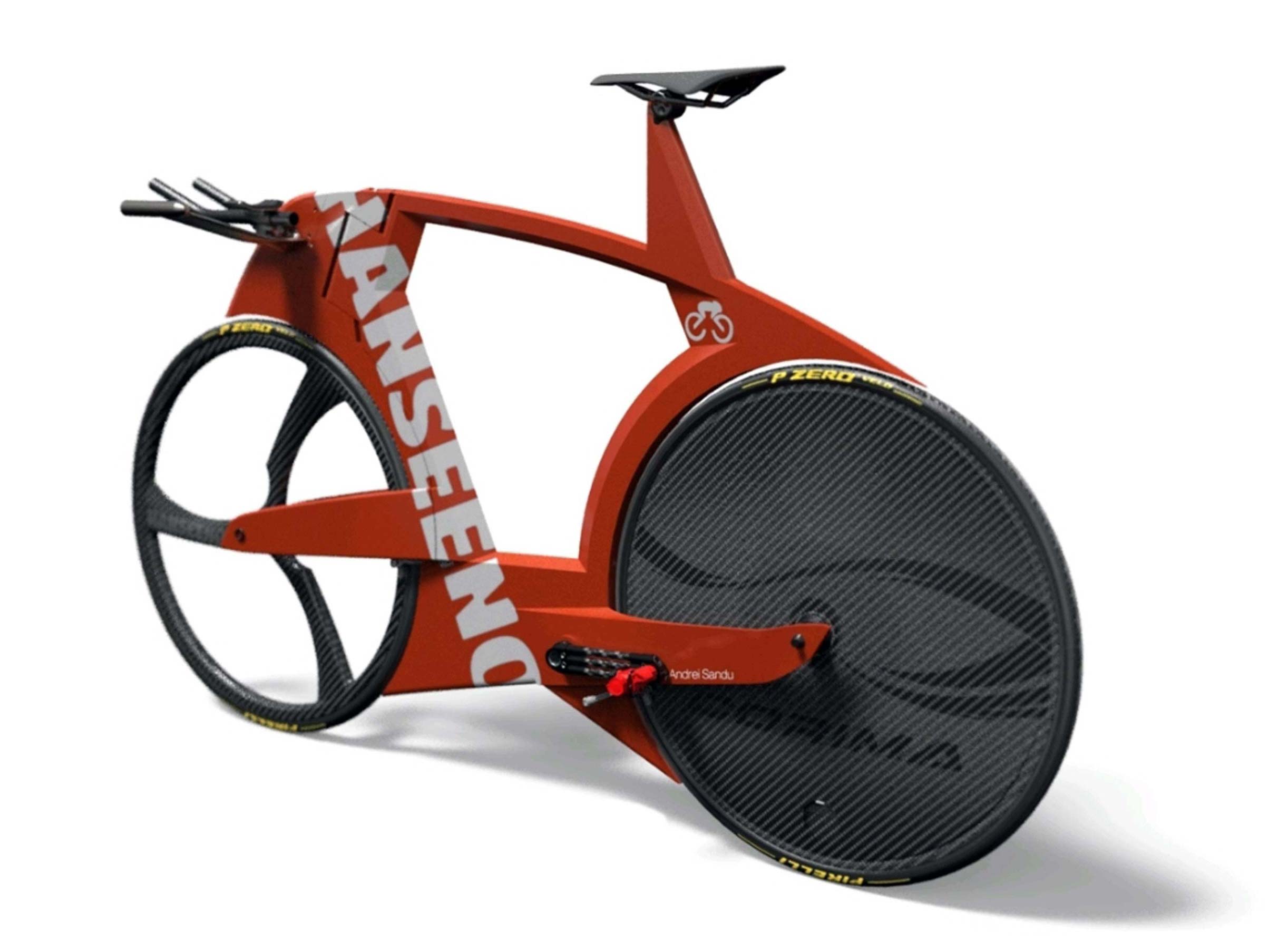 The Hanseeno bike you see here boasts a lot of innovation and plenty of examples of things the UCI would consider ‘illegal’, for bike racing at least, but triathlon doesn’t have the same level of limitations.

A longer wheelbase than a typical bike is just the beginning of what promises to be a most intriguing design experiment.

When complete, the Hanseeno bike will feature a horizontal fork, proprietary gear shifting system, and a carbon-fibre frame that’s essentially the same width as the tyres, just 28mm. 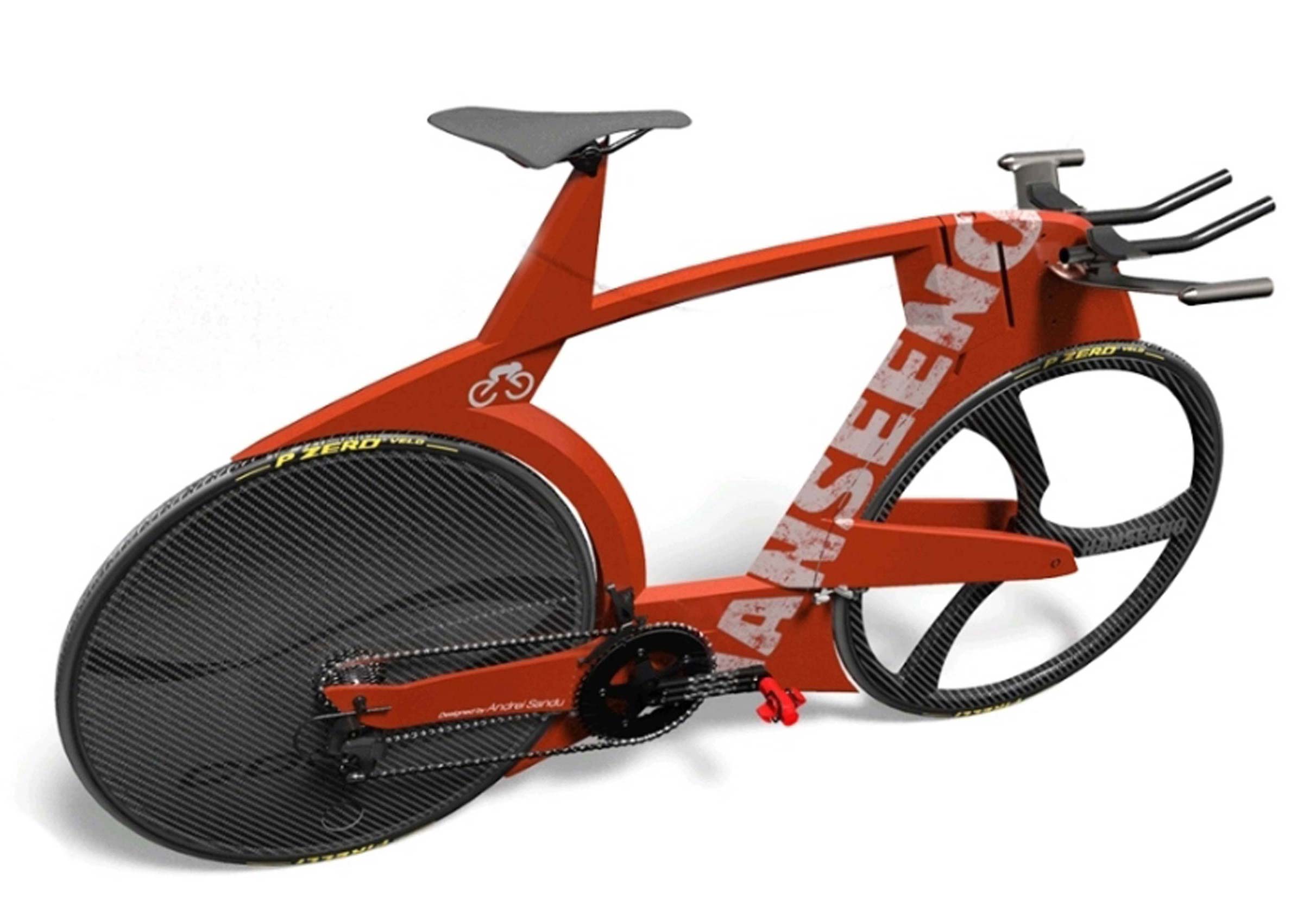 It’s a work in progress and it’s all being built in Hansen’s base in the Czech Republic.

He explains the bike and the thinking behind it in a long, fascinating interview (click the link above to watch the video).

The aim is to race the new Hanseeno bike at the Hawaii Ironman triathlon. Hansen hasn’t yet qualified, but he intends to compete in the pro category. It’s a long road yet before we see if he can get to Kona, let alone compete on this curious-looking beast of a bike, but it’s certainly worth watching the interview if you’re curious to know more.

Hansen has a long history of making his own carbon-fibre shoes which, he admits, is already a complicated undertaking. He knows that building a bike – one with a revolutionary range of features, including a groupset of his own design – is going to be a challenge but he’s also confident in his abilities.

It’s not going to be light. In fact, he doesn’t even dare guestimate how heavy it’s going to be, but that’s not the focus of the project. Rather, it’s about being aero, comfortable and fast!

Click ‘play’ and enjoy the interview. Adam Hansen has agreed to stay in touch with RIDE Media to tell us more about his Hanseeno bike as it progresses from drawing board to 3D printer and, ideally, to competition in Hawaii… and beyond.