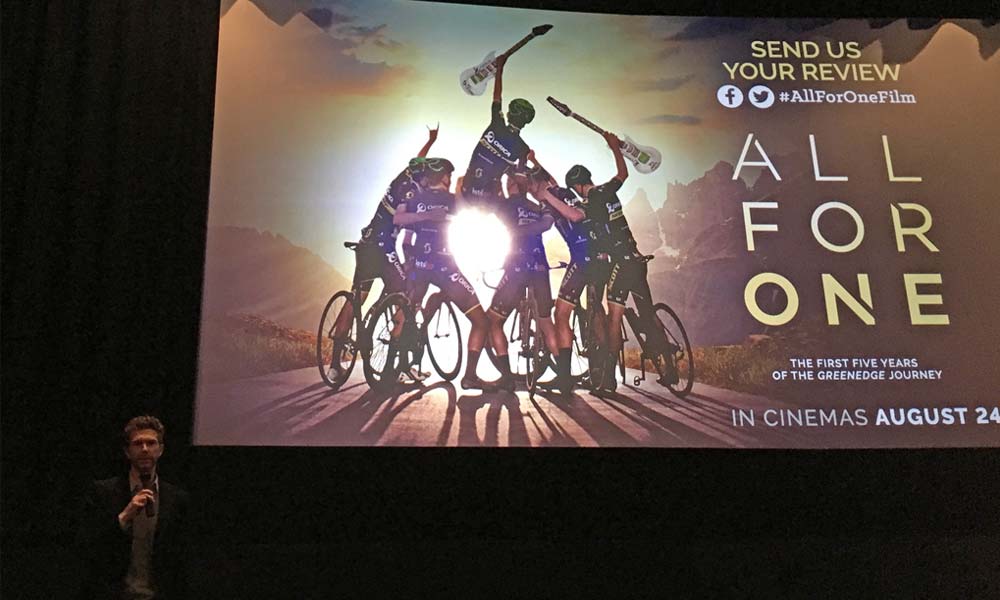 All For One: a cycling feature film

‘All For One’ is a feature film about cycling in cinemas from 24 August 2017. Advance screenings have been held around Australia this week and we spoke with director Marcus Cobbledick about the movie making process.

Never mind what you already know about cycling – or even the Orica-Scott team (or ‘GreenEdge’, or its many other titles) – take a couple of hours and treat yourself. Go to one of the 48 theatres across Australia that is showing ‘All For One’. Grab some popcorn (if that’s your thing) and sit down for some genuine inspiration.

Many of us know the stories. We have grown up with the personalities who make this squad something special in the pro peloton.

We have seen the work of Dan Jones over the years and followed the ‘Backstage Pass’ series on YouTube since the team’s inception over five years ago.

And hopefully you have read some of the interviews on RIDE Media with the many characters involved in various conquests during the time that the team has been around.

‘All For One’ focuses on riders and events we already know about but it is absolutely worth watching because it’s a stunning film which evokes all kinds of emotions.

There is previously unseen footage and fantastic interviews that explain the kinds of emotions that cycling can conjure. There’s the typical Dan Jones inspired soundtrack you’d expect and plenty of highlights from over the years. And there’s a good dose of inspiration on offer.

You may know the stories but seeing it all unfold on the big screen is a reminder of how beautiful cycling is and why the sport continues to attract vast audiences all over the world.

‘All For One’ is not just a highlights reel or a best-of rendition of ‘Backstage Pass’ episodes. It’s proper entertainment, solid story telling, and insight into something that has grown from humble beginnings into a force in the sporting world. 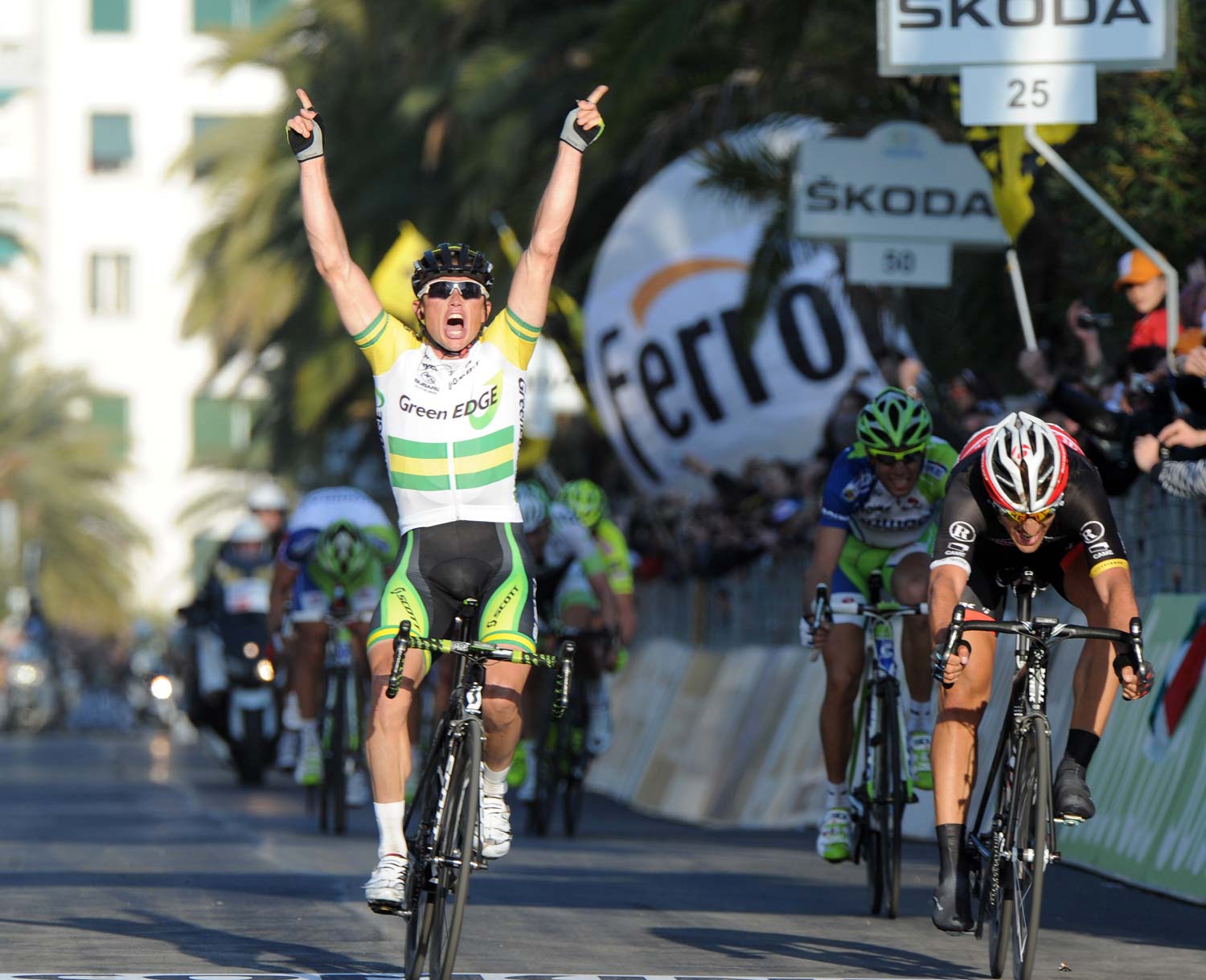 First year of the team, first win in a Monument (above): Simon Gerrans claims Milan-San Remo…!

On the night of the Sydney premier of ‘All For One’, we caught up with director Marcus Cobbledick and asked about the process of making the film and how it was working with the jester – and motivator – of the GreenEdge team, Dan Jones.

“We always knew there was more on offer,” Cobbledick said about the work Jones had done while making the Backstage Pass series, “and he was always striving to get a film made because you’ve got stories that span over such a long time frame.

“And when you can follow a story or character throughout a five-year span, it becomes truly engaging.”

Below is our interview with Marcus about his experience of making a fantastic film all sports fans will enjoy. 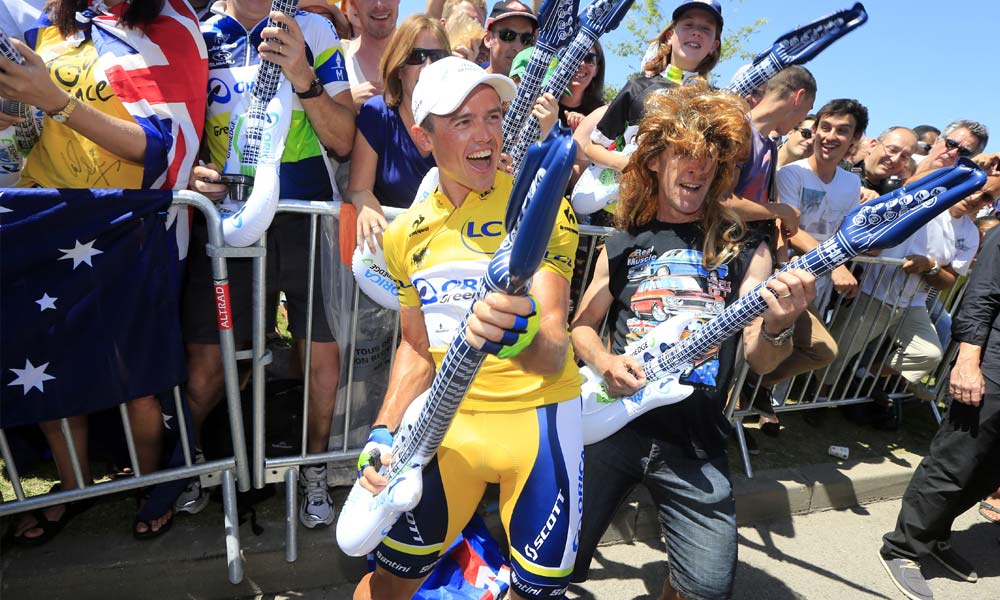 “It was evident that they take their racing seriously but they don’t take themselves seriously.”

– All For One director, Marcus Gobbledick 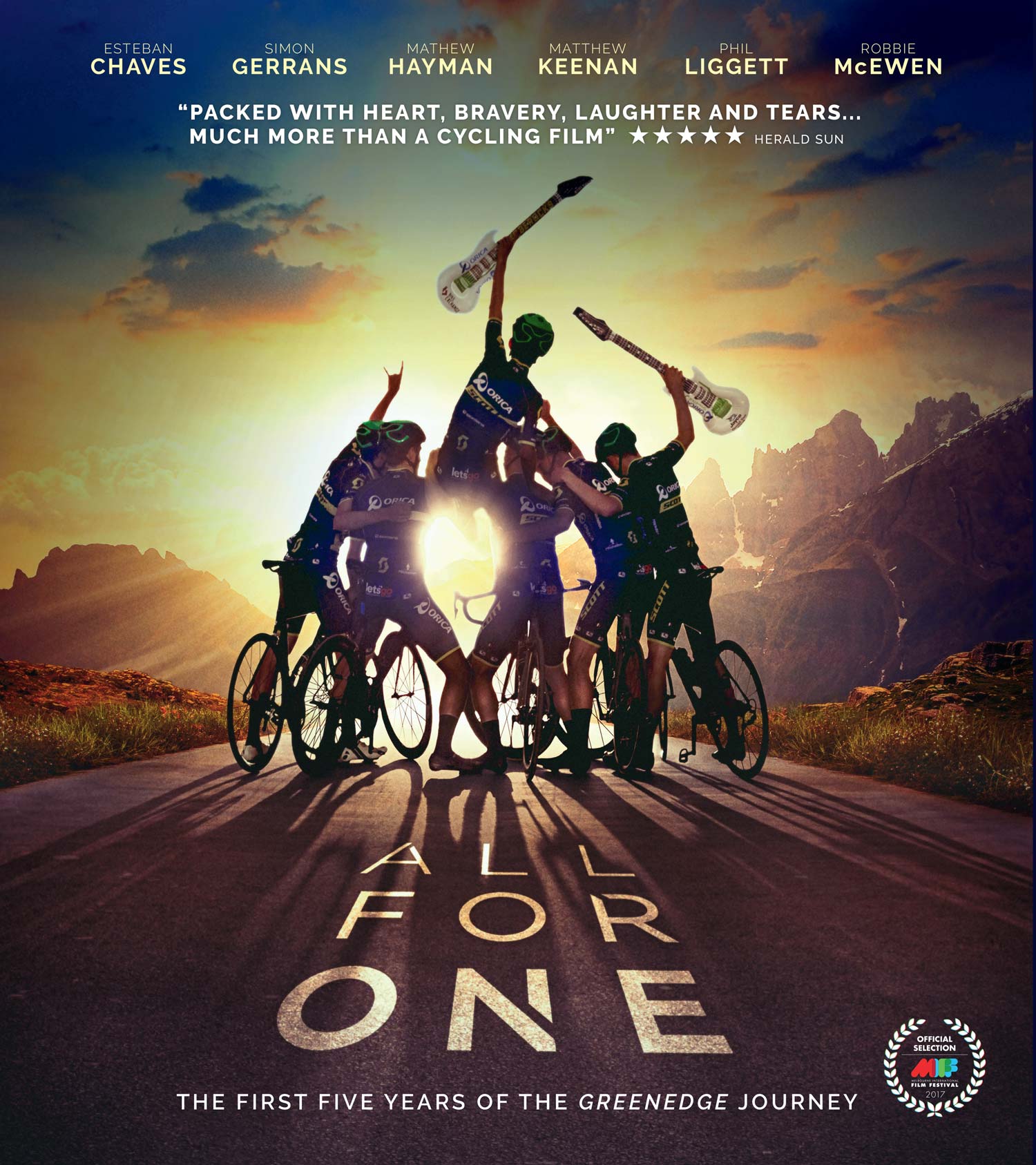 RIDE: Did you come to cycling because you knew Dan Jones? Or you knew cycling all along? What’s your background in the sport?

Marcus Cobbledick: “Well, apart from being a ‘Backstage Pass’ fan from the very outset back in 2012, my first film was called ‘Fairless’.

“We had a guy who grew up in our farming district just outside of Shepparton called Steve Fairless. He represented Australia at the Olympics back in 1988. I followed him around for a couple of years and made a film about him and his comeback to the sport later in life.

“Shayne Bannon, the general manager of GreenEdge, was in that film – he was one of Steve’s old coaches.

“Just at the time that we finished that film, Shayne saw ‘Fairless’ on a Qantas flight about the same time that Dan [Jones] was looking for a production company to collaborate with to make this GreenEdge doco.

“Dan came in and met with us and it was evident that he had 4,000 hours of footage that he’d shot over five years, and some wonderful characters and wonderful events. So half of the challenge was really the writing process, where we were shaping this story out of an enormous amount of content.

“We had some script consultants to help us and we just worked up draft after draft until we were happy with the balance.

“The writing process was substantial and we were kind of spoilt in a way because, as you know, they’ve had dozens of riders come through the team over the five years. They’ve had some wonderful success and some pretty terrible times as well, so for us it was about getting the balance right and choosing the characters and the subject matter that we thought was most appropriate.”

It’s considered the “larrikins’ team”. Is that a big part of the attraction or just the fact that it’s top-tier cycling. What drew you in most of all?

“I think that the larrikin angle is just part of the team’s DNA and what makes them special.

“When I first started doing interviews with the team and spending time with them at their training camp in South Africa and also over at the Tour of Spain last year, it was evident that they take their racing seriously but they don’t take themselves seriously.

“They’ve created this wonderful environment where, because they’ve got the balance right, they can actually focus when they need to and just relax and balance themselves when they don’t need to.

“I guess Dan Jones does a lot of that himself, that’s his influence on the team.

“Because of his jovial approach he brings the staff and the riders together and he has everybody laughing most of the time – and when you’re laughing you’re forgetting about how tough the racing is.

“That’s what Dan brings to the team. I hope that’s what we’ve captured in the film as well – how important Dan is to the team – and also how much that approach that they’ve taken, that culture that they’ve built, is one of the major factors in why they’ve had great success on what is fundamentally a pretty modest budget.” 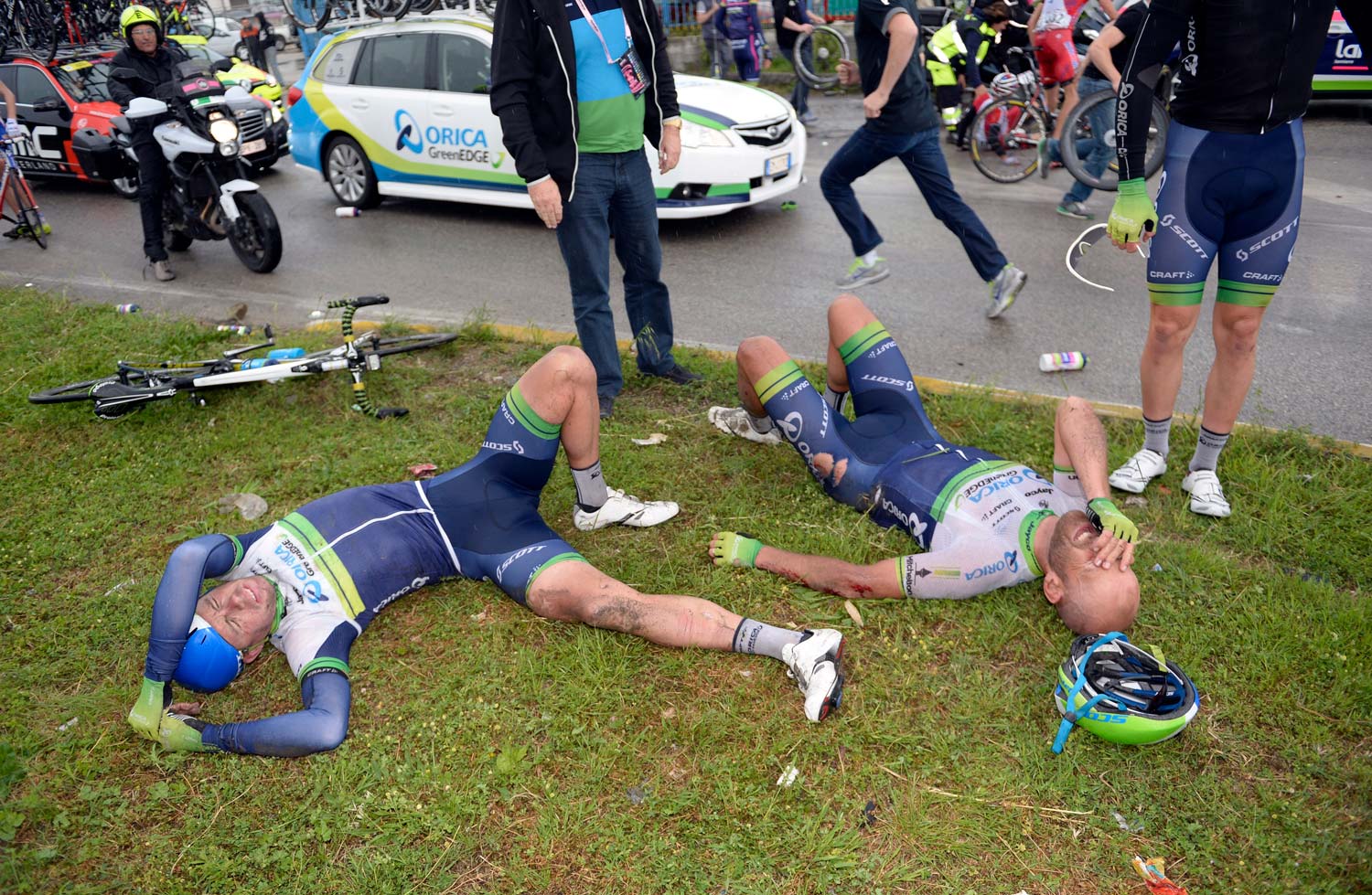 Cycling encourages story telling and the film makers deliver a range of emotions in All For One.

We all see the reactions in the team car when they win Milan-San Remo or Paris-Roubaix or Liège-Bastogne-Liège. We understand what the joy this brings. But you’ve watched that reel over and over and over again, producing this movie; picking the right scene, considering the shots. When you’re making a movie like this, do you still get goosebumps each time you see it?

“Yeah, it’s funny you should mention that.”

And, if so, which scene is the one that really pulls are your heartstrings the most?

“I’ve watched the film probably well over 70 or 80 times, doing the grading process and also the sound mix and everything.

“And the Milan-San Remo win always gives me goosebumps no matter how many times I watch it.

“There are certain points in the film that make me emotional.

“And that’s because of the story. That was one thing that was so great about the interview process; you’ve got guys who are willing to share their vulnerabilities with you.

“They are willing to talk about the tough times in their career. That’s great for two reasons: it’s therapeutic for them, you can tell they feel lighter after the interview – particularly with an interview with Neil Stephens, for example.

“And what it does for an audience is it gives you the ability to relate to them because they’re revealing their flaws and you and relate to people who are doing that rather than telling you how many races they’ve won.

“It’s because interviewees were able to do that, we were able to make something more than just a behind-the-scenes look at a cycling team.

What are you going to do next? You’re a movie maker but both movies that you’ve talked about today have been about cycling. Do you now feel that, from that inspiration, you’ll go riding or you’ll go searching for more stories? What comes next?

“The inspiration to ride, throughout this whole process – the last two years of working on the film – is considerable.

“I commute to work on the bike each day and so on every single ride home I’ve got an extra five or 10 percent of inspiration in my legs that I can use on the ‘Commuter Cup’, which takes place every day… of course.

“But the more you hear stories from people, the more inspiration you find.

“And the other great thing is that there’s always fantastic sportspeople in regional areas that have stories that are worth telling.” 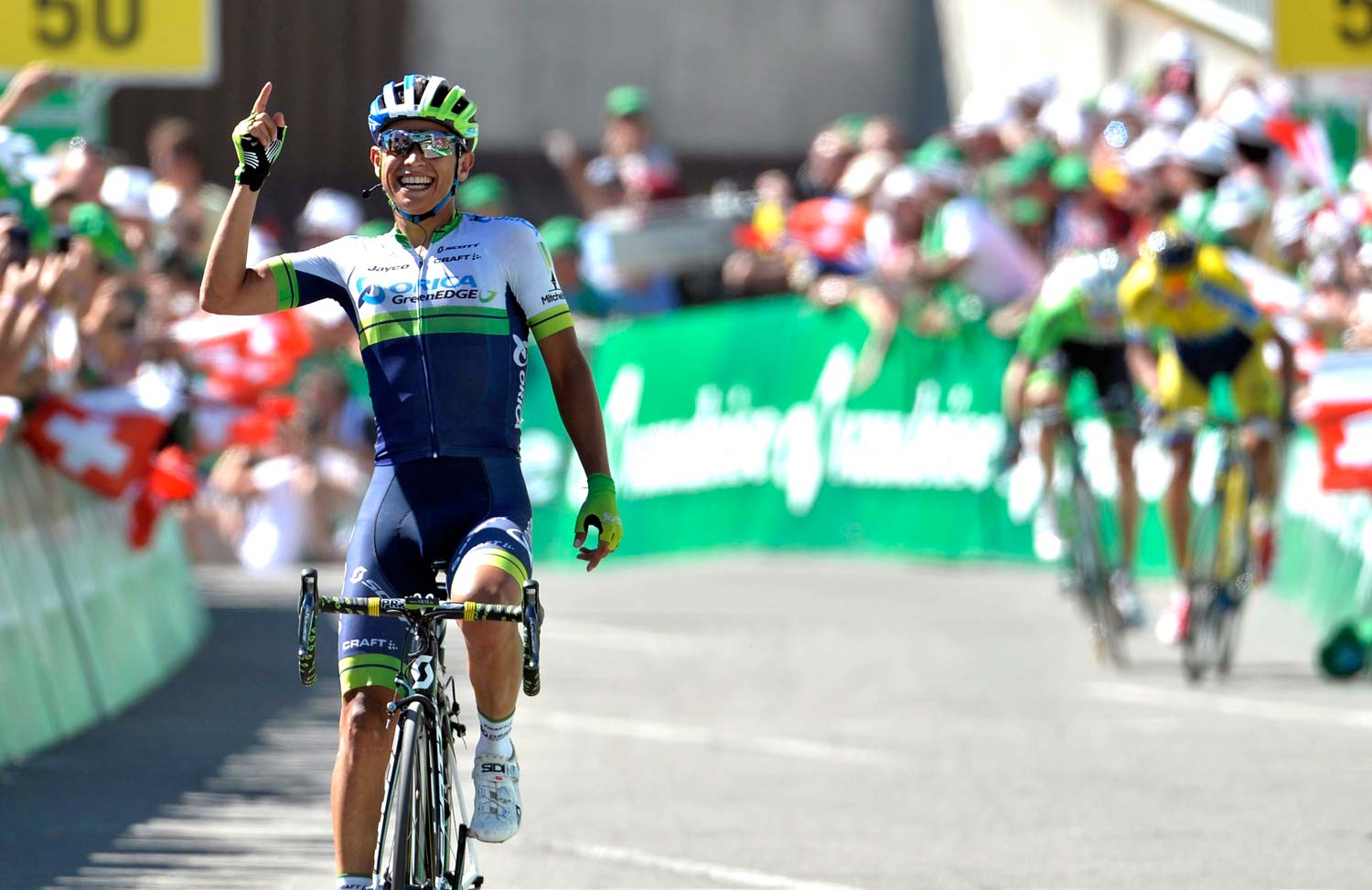 Esteban Chaves is one of the key characters of the film. Watch how the Colombian evolves from a young hopeful into a genuine GC rider for the Grand Tours.

In an era where kids are being brought up as ‘digital natives’ and there’s a strong influence from YouTube on viewing habits, the feature film still holds a big part of the wider media package. Can you comment on the variation in methods of film making that is on offer in the modern world?

“Essentially this film is built on the ‘Backstage Pass’.

“The longest duration of one of Jonesy’s episodes would probably be 20 minutes. On average they would probably go for about six or seven minutes. And Dan Jones is a master of story telling within that short duration.

“Like any series, it becomes addictive and you get to know the characters so well and that’s what he’s done beautifully with GreenEdge.

“But I think we always knew there was more on offer, and he was always striving to get a film made because you’ve got stories that span over such a long time frame.

“And when you can follow a story or character throughout a five-year span, it becomes truly engaging.