Australian Olympic Committee: “Athletes should prepare for a Tokyo Olympic Games in 2021”

No one wanted it to come to this but now even the IOC and AOC admit that it’s time to find a solution for the Tokyo Olympics amidst a global shutdown and, it seems, #Tokyo2021 is looking like an option.

“It’s clear the Games can’t be held in July,” says Ian Chesterman, Australia’s Chef de Mission for the Tokyo Olympics. The bold statement is from a release issued by the Australian Olympic Committee (AOC) earlier today.

Until yesterday, the IOC and AOC were insisting that the Games could still proceed in 2020 despite world sport being in disarray because of the COVID-19 pandemic.

Athletes, coaches and administrators alike have been coy about how things may play out and there was a suggestion that the decision on the likelihood of Tokyo 2020 still being staged this year would be delayed as long as possible.

Yesterday, the IOC’s capitulation on that attitude began to show.

“The IOC will, in full coordination and partnership with the Tokyo 2020 Organising Committee, the Japanese authorities and the Tokyo Metropolitan Government, start detailed discussions to complete its assessment of the rapid development of the worldwide health situation and its impact on the Olympic Games, including the scenario of postponement.”

Three months ago, this would have seemed extreme but now it is logical.

There is a lot more at stake in 2020 than sporting events but the ramifications of postponements and cancellations are being felt across the globe.

To shift the date of the Olympic Games would require huge planning and represent an enormous disruption to how athletes prepare – and how everyone else associated with the Games manages their respective responsibilities – but it is becoming apparent that there is little alternative.

Chesterman noted this in the AOC’s statement from earlier today. “Our athletes have been magnificent in their positive attitude to training and preparing, but the stress and uncertainty has been extremely challenging for them,” he said.

“While there will still be much to work out as a result of this change, the timing will allow athletes from around the world to properly prepare with the hope the coronavirus crisis will be under control.”

Ultimately, a decision is going to be better for the community than indecision.

We wait and watch with interest to find out exactly what is mapped out by the IOC in the coming weeks but the days of assuming that the Olympic Games are immune to the effects of a global pandemic are over. 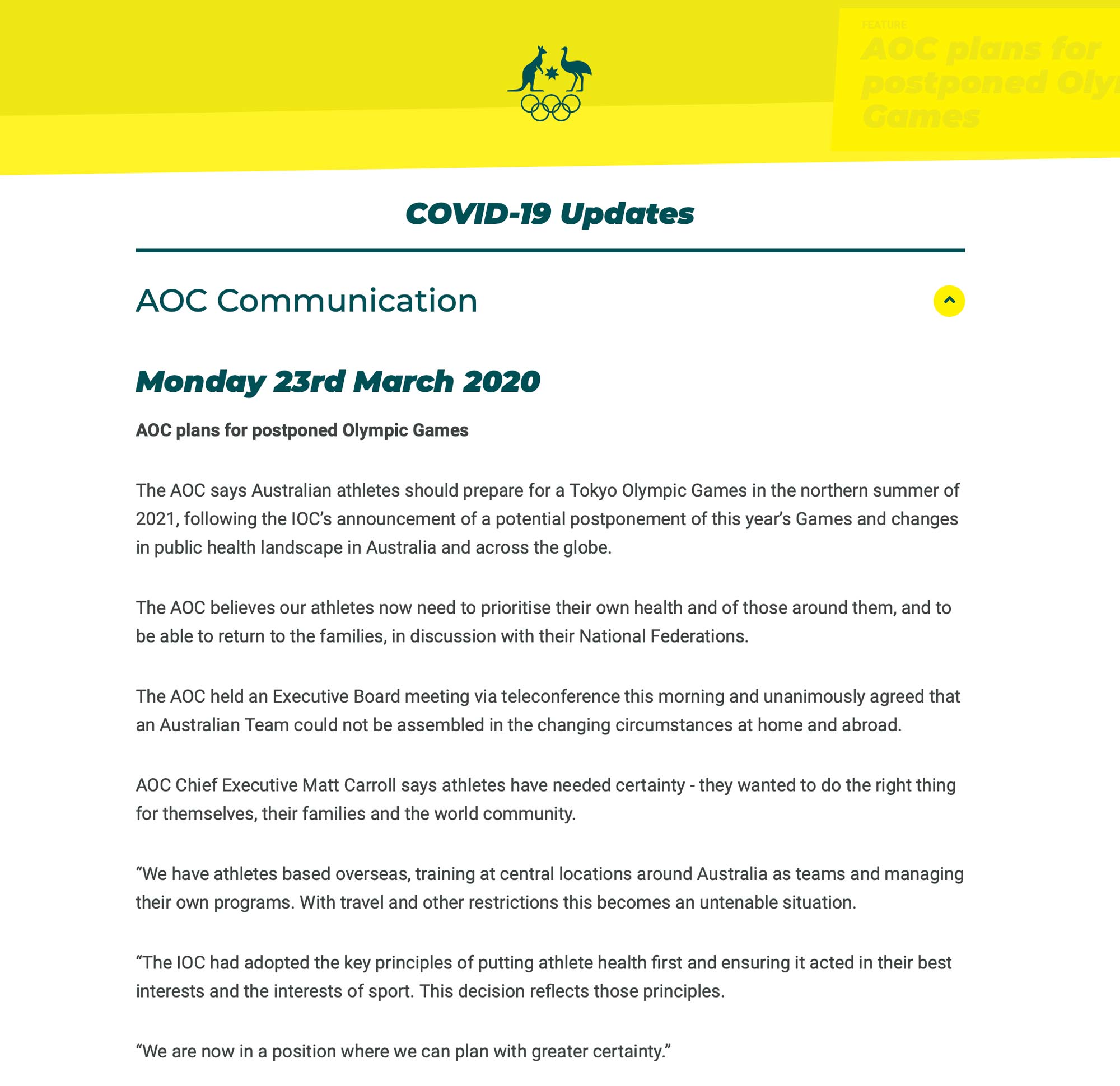 (Click the image above to see the AOC’s full statement.)