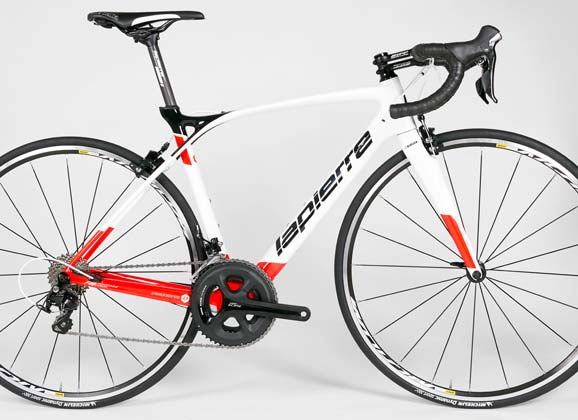 There aren’t too many WorldTour raced framesets that can be purchased for $3,699. That figure buys you the Lapierre Xelius SL 500 – the same frame ridden by the FDJ team – with Shimano 105 parts and Mavic wheels attached. Bargain right?

As expected, it rides nicely too. 105 may be a little heavier than its more desirable Shimano siblings and the Mavic Aksium wheels have a bit to be desired but as a slightly-better-than-entry-level bike, the Xelius SL 500 is one of the best out there.

It has a relatively slack head tube which enables the rider to tuck in and corner with confidence on descents or tight bunch rides. The Xelius SL 500 is a complete bike that is suitable for new road riders and experienced racers alike.

The Xelius SL’s unusual seat tube/seatstay design increases compliance when seated which is noticeable as you remain planted when riding even the harshest roads. There’s a connection between rider and bike that precious few bike companies manage.

For a slideshow of 30 images of the Lapierre Xelius SL 500, click the image below.

Rob on the Lapierre

“It’s Rob back from a spin on the Lapierre on test in issue 72.

“I think I’m going to just say it outright: I like Lapierre. The last time we had one it was an Aircode and I loved it – I raved about it. This one is a Xelius, I think – I actually haven’t looked at the name. But it’s a different configuration at the seat tube and that’s the thing that they’re selling it on: it’s sort of designed to be a ‘comfort’ bike.

“The theory will be explained but basically what you’ve got is the seat tube that’s sort of floating and the idea is that it gives a little bit of comfort. I did some bounces on the saddle, standing on the pedals and then dropping my bum on the back of the saddle and looking down through my legs to see if there was movement.

“There was definitely movement and it was coming mainly from the post. I’m not convinced that it’s really coming from the seat [tube] but either way, what you’re getting is a bit of comfort – that’s for sure.

“It’s not compliant at all, but the theory of it is that you’re alleviating some of that road shock and it’s not hitting you [harshly] in the sit bones. I think that it’s doing that job.

“I’ve had a couple of long days on the bike [before this ride] and I did have a little discomfort on my new Trek Emonda. Is this more comfortable? I reckon it probably is – and the Emonda is very comfortable.

“One thing that is similar between this and my bike is that it’s got direct-mount front brakes but [on the Lapierre] not on the rear. I have to say, this has to be the way that bike companies go in the future, it’s just fabulous.

“There’s this perpetual argument about disc brakes; my reckoning is that direct-mount brakes – certainly on the front – do help give stopping power. It didn’t follow through on the rear because it is a little different with the single-bolt onto the frame.

“I reckon this bike looks fantastic. Don’t scoff at it just because it’s got 105 on it. I think it’s a pretty clever marketing ploy; they’re putting bikes out there that people can buy [at a reasonable price] and get used to their riding and get accustomed to quality and then, if they really need to, they can upgrade. But this groupset is absolutely first-class in terms of function. It probably doesn’t look as attractive as Ultegra or, particularly, Dura-Ace and the mechanical shifting is a little step down but it’s still very direct.

“If we had shifting like this not that long ago, we’d be pretty chuffed with it – we’d be raving about it.

“I think there’s a lot to like about this bike. It does come with wider bars, and I usually complain about this. I didn’t mind it on this at all. It felt a bit like a wagon, that’s not meant as an insult… but it just felt different to the 22 and the Cipollini which I’ve come off but those bikes are also heaps more expensive and completely different concepts.