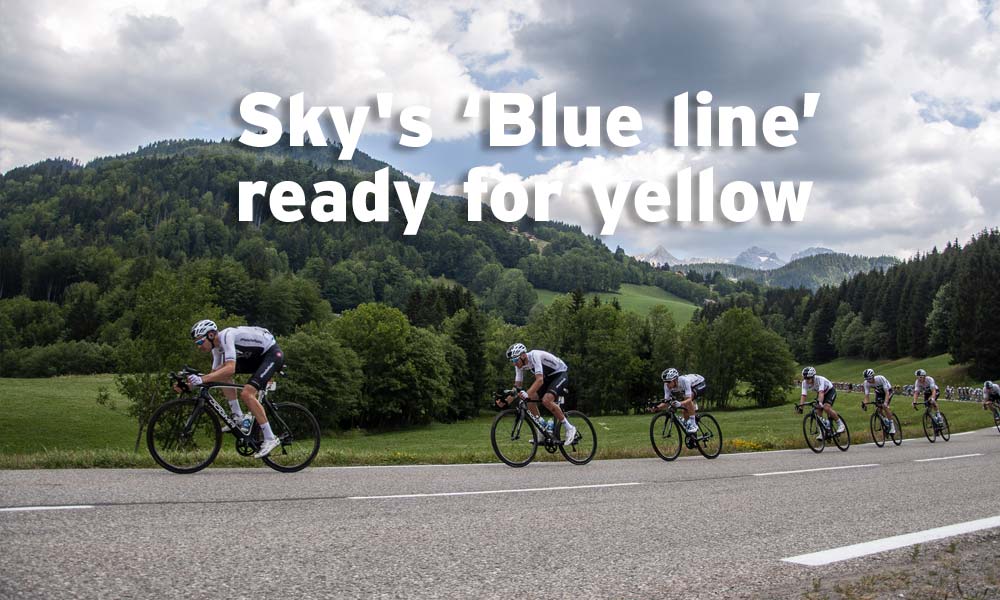 ‘Blue line’ ready for yellow… just not in stage 10

Even though Greg Van Avermaet increased his lead in the Tour de France in stage 10, he believes that it is certain someone else will wear the yellow jersey after stage 11. Who?

The Tour is now in the Alps and we saw a sight cycling viewers know all too well: Team Sky setting the pace at the front of the favourites, keeping the pace high and their eyes on the rivals to GC. At the bus after the stage from Annecy to Le Grand Bornand, the team principal, Dave Brailsford offered a solid overview of how he sees things while riders cooled down behind him.

Sir Dave walked away from his five-minute chat with the media with a smile, laughing about having recently been labelled as “divisive” by Bradley Wiggins.

“I’ve been described as a lot worse, haven’t I? Let’s face it, on my Richter Scale, that’s not bad to be honest. I’ll take that.”

The mood surrounding the team has been interesting over the opening stanza of the 2018 Tour. The race began with booing at the team presentation but it certainly seems to have quelled, the more it moves on. And Team Sky goes about it’s business in the knowledge that it has some of the finest cycling talent on the planet on the roster, and a history of knowing how to manage all that firepower.

The leader of the team, quite clearly, remains Chris Froome. After 10 stages, he sits in sixth overall, now 3:21 behind Greg Van Avermaet who did an outstanding ride on the first day in the mountains. The Belgian increased his advantage in the general classification, finishing fourth in Le Grand Bornand – yes, fourth! – and his nearest rival remains Sky’s Geraint Thomas, at 2:22.

The “divisive” comment by Wiggins related to the manner in which Brailsford has confided in GC riders at Sky, essentially encouraging multiple riders that they are going well and could achieve big things.

It’s clear that, if Froome were to falter, Thomas would be more than willing to take over as team leader and Sky, for the moment, still has the luxury of that option.

With four significant climbs on the menu for stage 10, the assumption was that there would, in fact, be a change in leadership but GVA continues to astound with his consistency of efforts – on the flats, in the team time trial, over the hills, and across the cobbles. And then, today, over mountain passes. 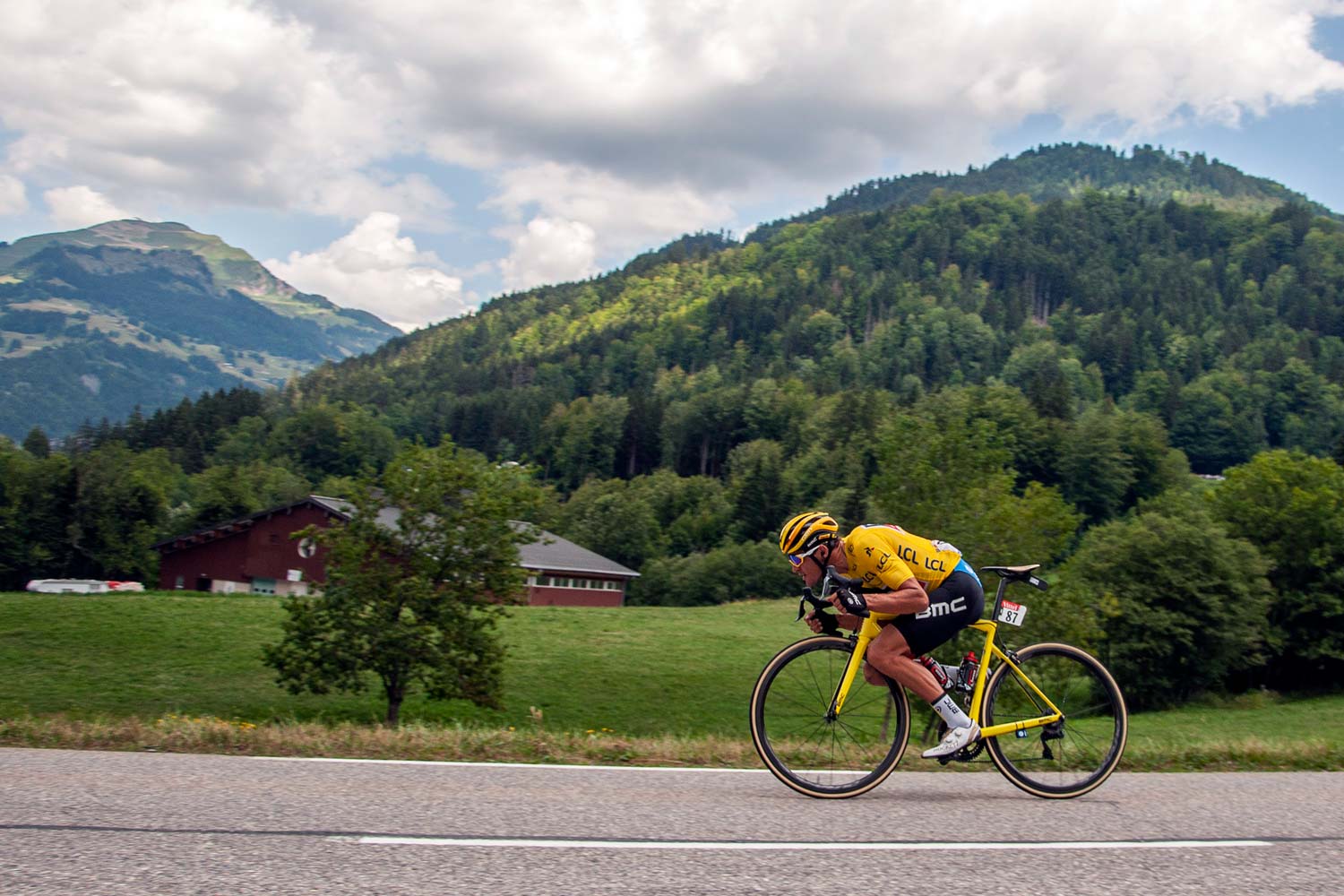 Had the Classics specialist faltered, the obvious heir to Tour leadership was Geraint Thomas but the Welshman remains The Next Best on GC. And, he says with a shrug of the shoulders and his usual calm tone: “Ah, it would have been nice [to take the yellow jersey] seeing as we’re controlling the race anyway, but that’s just the way it goes.

“Hats off to Van Avermaet. We kind of expected him to do that – he did it the last time he had the jersey as well (2015) and it was a really strong ride from him. He deserves to have that jersey another day.”

For his part, GVA is realistic about stage 11. “For me, it’s a bit too much. I’m really happy to extend my time in the yellow jersey one day extra, but I’m really giving my chance zero for tomorrow.”

There were attacks early and it paid off handsomely for two men in particular. Julian Alaphilippe scored his first stage victory at the Tour after an impressive performance, riding solo to Le Grand Bornand with enough of an advantage for him to savour the experience and soak up the atmosphere in the Alps. And, of course, Greg Van Avermaet’s early gamble earned him the 11th yellow jersey of his career, spanning stints as Tour leader in 2015 and this year.

“We were expecting guys to go,” said Thomas about the anticipation for the opening stage in the mountains of this year’s race, one contested immediately after the rest day.

“I guess we were expecting the worst and hoping for the best,” said Thomas.

“I think everyone got put off a bit because of the headwind and just ‘Kwiato’ riding such a good tempo.

“Dan [Martin] had a dig over the top; Egan [Bernal] controlled that really well.

“And I think the team is just riding really well together – long may that continue.”

The true victim of the mountains is last year’s runner-up, Rigoberto Uran. Before the stage, I asked EF-Drapac’s DS Tom Southam about “the curse of the rest day” and how everyone would respond to racing again after having Monday off. “Well, we’ll see,” said Southam. “It’s a hard one, especially after a cobbled stage… we did all the right things yesterday – we did a six kilometre climb – so they worked a little bit yesterday and obviously got a bit of rest in but they should be ready.”

‘Rigo’ was ready. He was coping. But then he faltered and, it would seem, his bid for another podium at the Tour may have come to an end in stage 10. Uran lost 2:36 to Thomas, Froome et al and almost six minutes to Alaphilippe. That wasn’t part of the script for the experienced Colombian; meanwhile, one of his compatriots, Egan Bernal, got his first taste of the Tour in the mountains. And he liked it.

“It’s always good for me to be in the front of the peloton of the Tour,” Bernal, the youngest rider in the Tour this year, told me. “It’s nice.

“I think I did a good job for the guys. We arrived with the favourites’ group and it’s good.”

Brailsford reminded us of the mix of youth and experience in the ‘blue line’. “We’re doing alright,” he said. “We all make mistakes don’t we? We’ve got to look in the mirror and tell yourself the truth about what you’re seeing and not kid yourself. And I try and do that but we’ve just got to keep on learning.

“We’ve got two really, really young guys and the rest is incredibly experienced… a lot of those guys have been through thick and thin together. As long as you can nip everything in the bud, any comment – anything else – and talk about it straight away, that seems to be the way to do it.”

If GVA falters and G keeps riding the way he and his team knows he can, then the yellow jersey may replace the Welshman’s team jersey. If all goes really well, it could be that Team Sky nets first and second on GC after the first mountain-top stage finish of the 105th Tour. And that’s when Sir Dave may have to “talk about it straight away” and ensure that things don’t get divisive on a team stacked with talent.