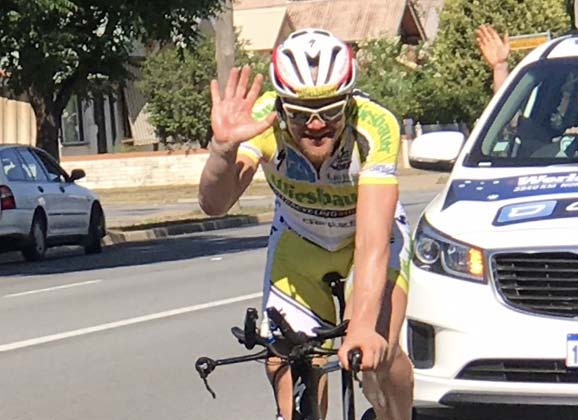 When he arrived in Wagga Wagga yesterday, Graham Springett went along to find out more about this epic adventure by the Austrian endurance cyclist… 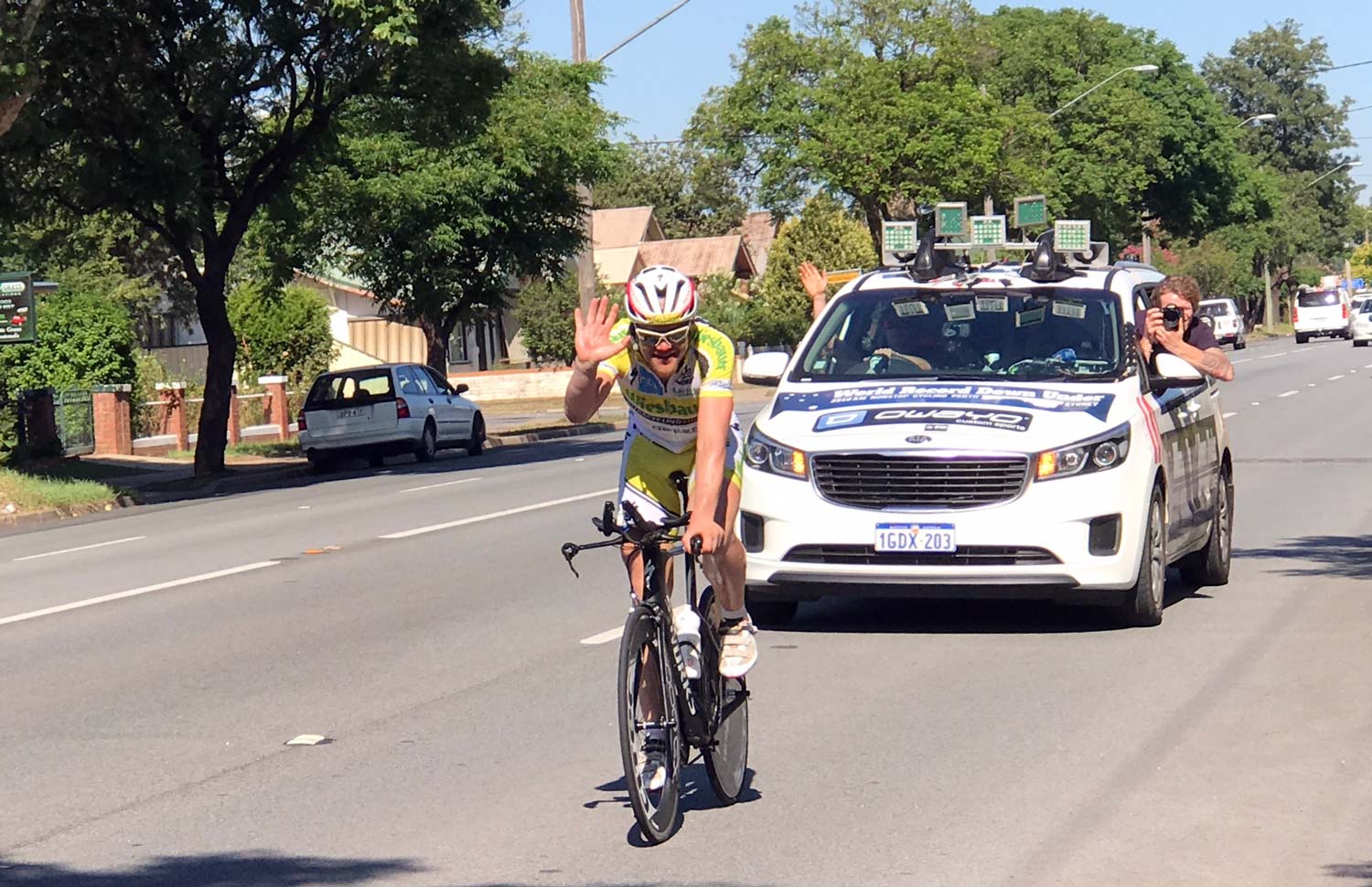 ‘I dunno, the tracker isn’t moving, it might be playing up.’

The band of sleepy cyclists had met at 4.00am with one goal: to cheer on ultra-endurance cyclist Christoph Strasser as he passed through Wagga Wagga en route from Perth to Sydney.

Sleepy they may have been, but their plight was almost laughable compared to the target of their journey.

Austrian Strasser had set off on his 3,950km epic from Cottesmore Beach in Perth on January 10, six days earlier, to break the record of 7 days 8 hours – held by compatriot and a consultant on this ride, Gerhard Gulewicz.

So why January, in the height of the Australian summer? Because it’s hot, that’s why.

And that’s the second goal of the ride: the three-time Race Across America (RAAM) winner has been testing new clothing and equipment designed to combat hot weather, a factor which caused him to abandon the 2015 RAAM.

Support team leader Arnold Schulz revealed some of their secrets: “We used external cooling measures such as cooling vests, water nebulisers and by reducing speed in the midday heat.

“Thin but long garments were a good protection against solar radiation in certain conditions, but did not replace a good sunscreen on bare skin.”

The last thing the band of pre-dawn supporters needed was sunscreen – what they really wanted was more sleep, a luxury they could afford given they had only ridden five kilometres out of town in the pitch blackness of the highway linking Adelaide to Sydney.

And so the cyclists from Wagga went back home, back to sleep, and agreed to reconvene later.

Meanwhile, on and on rode the relentless Strasser.

Fast forward six hours: the sun is gaining some traction, the traffic is in full flow and a sizeable crowd including local TV cameras has gathered on the Sturt Highway through Wagga Wagga.

The tracker website following Strasser is working perfectly and eyes peer at phones to keep an eye on a dot labelled CS – ‘Christophe Strasser’.

Significantly, there’s also a dot labelled WR which is assigned to Gulewicz – World Record. It is travelling along the same route but it’s 435 kilometres back, way out west, and Strasser is well within the last 500 kilometres of the record attempt.

Ironically, the body temperature control equipment hasn’t been needed as much as anticipated: Australia has been rather kind to Strasser and not subjected him to the extremes which characterise the Outback in summer.

And that other hazardous quality of Australia, the kangaroo, has also been notable by its absence, according to Schulz.

“We saw a lot of kangaroos,” he said from on the road in the dead of night, “unfortunately only a few of them were alive, which has given us a little glance of their behaviour. Nevertheless, we have had no serious situations.”

Which brings us to another consideration: motor vehicles. “Cars and road train drivers were, so far, astonishing and friendly,” said Schulz. “Most of them greeted us and some cheered at us.

“Of course we tried to present as minimal an obstruction as possible, but in some cases we had to protect our tired and sometimes dizzy rider with our support vehicle.”

That “dizzy” rider has had to deal with endless hours of staring at a sometimes featureless and straight road – the Eyre Highway across the Nullarbor Plain features what is regarded as the longest straight section of road in the world, a 146.5km piece of mesmerising road surface.

“Christophe is able to focus on riding after a long period of sleep deprivation, but it is vital to communicate with him most of the time,” Schulz pointed out.

“During the night, fear and confusion can occur and he needs diversion by mental exercise and, importantly, by joking – having fun is one of the fundamental characteristics of this team.

“And yes, the Nullarbor Plain was definitely a special experience!”

Within a few moments, Strasser had passed the crowd which had waited to see him pass. A handy set of traffic lights allowed a pause for photo opportunities on eagerly held smartphones, and then he was gone, on his way eastwards for an appointment with the Hume Highway and the closing kilometres of this epic ride.