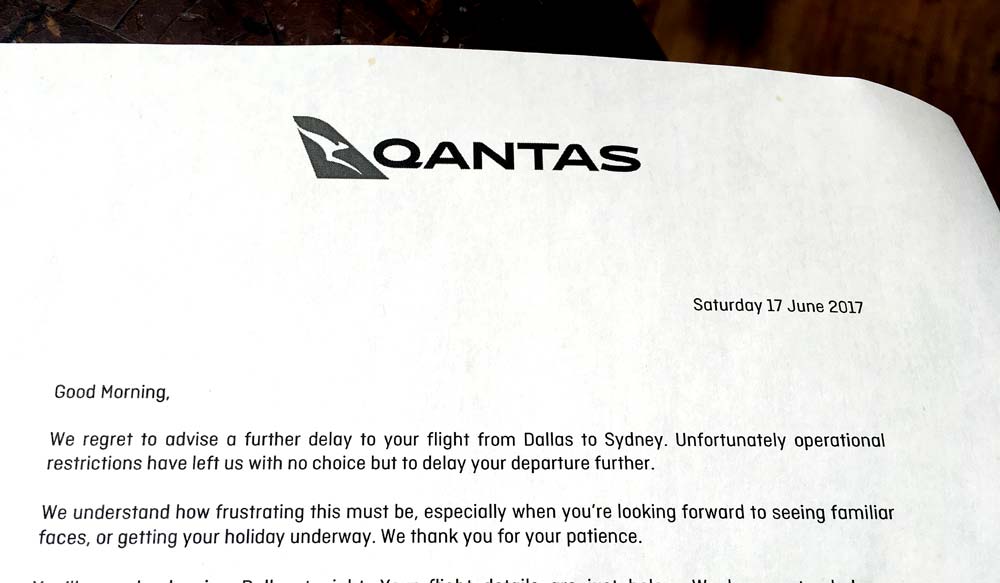 It was meant to be a quick trip to the US for business. Leave Monday, return on Friday and – with a crossing of the dateline – home by early Sunday morning. That was the plan but it hasn’t worked out that way.

Airline trouble is the reason. The Qantas Airbus A380, a technological marvel of the modern world, had technical issues. Apparently it’s something to do with “the electronics of the aircraft, ladies and gentlemen”.

After almost missing the connection from my destination of the trip, I made it to the correct gate at the Dallas Fort Worth airport. QF8 with Qantas, already a long-haul flight of around 15 hours, was due to leave at 10.10pm on Friday.

It wasn’t a full flight but the plane is a large one and the crowd that had gathered at the gate was ushered inside. We sat and went through the usual rigmarole that’s comes with a flight of this nature. Text messages to family were sent, a book was unpacked, headphones pulled out, comfy clothes replaced work wear, and the laptop unfolded while we waited to taxi out onto the runway.

And then The Plan began to change.

“Ladies and gentlemen, we have a little system error and we’re going to have to shut down the electronics momentarily.”

Kids stopped watching their movies. The lights went out for a matter of seconds.

The old adage seemed to apply, even for a bit of tech the size of the A380: have you tried turning it off and on again?

They did. But it didn’t work. The IT guys teamed up with engineers and they set about trying to remedy the situation as best they could. In US terms, it was 97 degrees outside and about 90 percent humidity.

It had been an interesting week and the words for the report were flowing while we waited for the next announcement.

“It shouldn’t be long now, darling.” The mum and dad in the seat behind me were trying to reassure their three young kids. “We’ll be on our way soon.”

The family had already been delayed the day before because of a missed connection. They lost a day of their holiday but they were clearly excited about their first trip to Australia.

There were grins exchanged by fellow passengers. Shouldn’t be long now… that was the sentiment. We’ll be on our way soon.

It doesn’t take long for positivity to turn to frustration. An hour? That’s cool, we all managed our respective moods and kept busy with books or texting or music or a movie on the restarted system. But the AC was coughing and wheezing, the temperature rising, the smiles slowly turning to different expressions.

Soon conversations started. “What do you think our chances are?” Etc.

Qantas staff hovered. They poured water and delivered snacks after the second hour of delay. Still at the gate, the plane was heating up and we could hear the engines churning and, inside this giant carbon-fibre shell, passengers started taking off their headphones and introducing themselves to one another.

Beside me was an academic. His speciality was “the future of education”, a great theme. So time passed relatively quickly while we considered this great quandary. It was an interesting discussion and it led us to many tangents…

Optimism remains in situations such as this. And yet each announcement became ever more polite… the “thank you for your understanding” seemed more earnest as time passed.

Of course they’re doing all they can to remedy the problem. And everyone understood that these things happen. It’s a big plane. And it can’t fly unless all the protocols are correctly followed.

Better to have a problem at the gate than in the air.

The kids behind me settled into their seats and found a movie. They sat surprisingly silent and watched the screen. Their mum told me about the 11-month-old, Adam, a dear little thing who “should start walking while we’re in Australia”.

The infant toppled around holding onto the armrests and weaving in and out of the legs of Qantas staff.

Before long, seatbelts were unclipped and others started to wander around the aircraft. There’s a long trip ahead, we’ll stretch our legs while we can.

Three hours… and intermittent announcements. It was getting ever warmer and as the AC began to fade, so did our hopes of getting off the ground.

(Note: We’ll resume with our usual cycling-related posts when the plane finally makes it safely back to Sydney.)

The text message updates to my family expressed frustration but also understanding. No one deliberately delays a flight. Qantas didn’t want things to go awry; not only is it bad for their reputation, the cost of having to find a solution is immense.

I’m not sure about the exact number of passengers but it seemed in excess of 300 people. The Qantas A380, their website tells me, can carry 388 passengers.

It wasn’t a full flight. Some stretched out, others lay down. The kids opted for the floor – we weren’t flying so why not get some rest why they could?

All the while, the mood remained calm.

Conversations continued and people got to know each other a little better.

I talked to Simon, the academic beside me, about publishing magazines and how I’d soon set off to cover my 20th Tour de France. He didn’t know much about the race but, as often is the case, “knew someone who would be so jealous” about my job.

I showed him the Tour Guide and he asked about the route, the riders and, of course, the doping situation. “Is it better now?”

“We hope so… but it is June. This is the time when scandals tend to emerge…”

He nodded and we talked about the chances of Richie becoming the second Australian winner. And the announcements continued…

“Ladies and gentlemen, we’ll get you on your way as soon as possible. When we know more, we’ll be sure to keep you informed.”

Four hours and the plane was getting warmer. Water was passed around, apples offered and smiles exchanged.

“What are our chances?”

“We really don’t know yet, sir. But the captain has promised to keep us informed.”

Ding…! The phones for staff were active and sporadically the AC burst into life to shoot out a bit of cool air. But it remained hot and humid. Inside that carbon shell, the spirit of hundreds of the passengers was being tested.

Better to get it right. If we have to stay, we stay. Etc. But could we please just know?

Five hours and the option to get off the aircraft was offered – but “if you do, please let us know your name as we’ll have to remove your luggage as well”.

But eventually, inevitably it happened. “Ladies and gentlemen, I’m sorry to say…” Etc.

We all packed up our bits and pieces and started the queuing process: standing in line to get off the plane, then another long line as we reported our names to the airport staff…

There were delays every step of the way: waiting to collect our luggage, waiting for our names to be called and the hotel list announced, waiting for the bus… the long drive from the massive Dallas/Fort Worth International Airport to the hotel that had been rapidly arranged. The wait for our hotel keys… the wait to know when we’d fly again.

The wake-up call came shortly after our heads hit the pillow.

By that time, friendships were formed. And this is what made a rotten situation bearable. People from all over the world had come together and rallied their energy to help each other get through a situation that happened to happen.

No one wanted it to be like this but no one complained. There was solidarity.

“Sure. It’s not ideal but… better to be safe than sorry.” Etc.

The airline staff, the ground staff at DFW, the bus drivers, the hotel staff… everyone was doing what they could at an impromptu moment to try and maintain a reasonable mood. And, oddly, it worked.

Many hadn’t eaten anything for hours. Lunch was the final meal for a lot of us. We’d eat on the plane… only that wasn’t an option.

Beer o’clock came and went and not a single drop was poured. Once the hotel keys were in hand, it was a race to our respective rooms to get some rest while we could. It’d only be short, so let’s make the most of it.

Down to the lobby and into another queue.

But no. Not this time. “Ladies and gentlemen, sorry but we have been advised that the plane still isn’t ready…” Etc.

The midday flight was delayed. Instead, it would fly at 10.10pm – as per the original schedule, only a day later.

In the meantime, the bill for Qantas continued to grow. The cost of such an event is immense and the mind boggles at all that needs to be considered at a moment’s notice. Staff, hotels, food… hundreds of people, young and old. Holiday makers and business travellers alike, we were all in the same predicament.

Amidst it all, oddly – but almost instinctively – smiles began to appear. It was so ludicrous, you had to laugh. Holiday time was fading, families at home were waiting, workers were anxious about pending meetings… but what can you do?

We realised that we were stuck. Annoying as it was, no one was harmed and everyone would eventually be okay.

We’d have a coffee. We’d wait. We’d get some rest (or write a blog about it) and, when the time was right, we’d fly.

In years to come, it’ll be a story we tell – and laugh. “Remember that time at Dallas/Fort Worth…? Oh man… that was a LONG night.” Etc.

The world is an amazing place. Losing a day because of aircraft trouble is a hassle. Some business couldn’t be done, some holidays were shorter than they should have been, some birthday boys couldn’t see their father the day they turned seven (sorry about that Xavi, I’ll make it up to you, I promise)…

But we were okay. And over 300 people, from all walks of life, could offer each other a knowing smile and a nod: what next? Oh man…!

But really? First-world problems such as this are little more than anecdotes for the future, small hiccups in the hussle and bussle of modern life.

It was awkward and tiring and confusing and ever evolving… and as annoying as it was, it provided an insight into the human psyche. We have our coping mechanisms and as varied as they can be for the vast range of predicaments that come our way through the course of each day, we manage.

I’d rather have been home than typing this while waiting for a plane. But I’m not.

When I do arrive, I’ll be happy to be home.

In the meantime, there’s a plane load of people who I didn’t know only a short time ago but they have become friends by proxy. We’ll look at each other as we queue through to the gate knowing that we’ve shared a moment.

It is, as the slogan goes, a little bit of the ‘spirit of Australia’.

To my fellow passengers, thanks for helping me get through this incredibly long day and helping me learn a little about myself and my emotions. It’s been quite a ride.