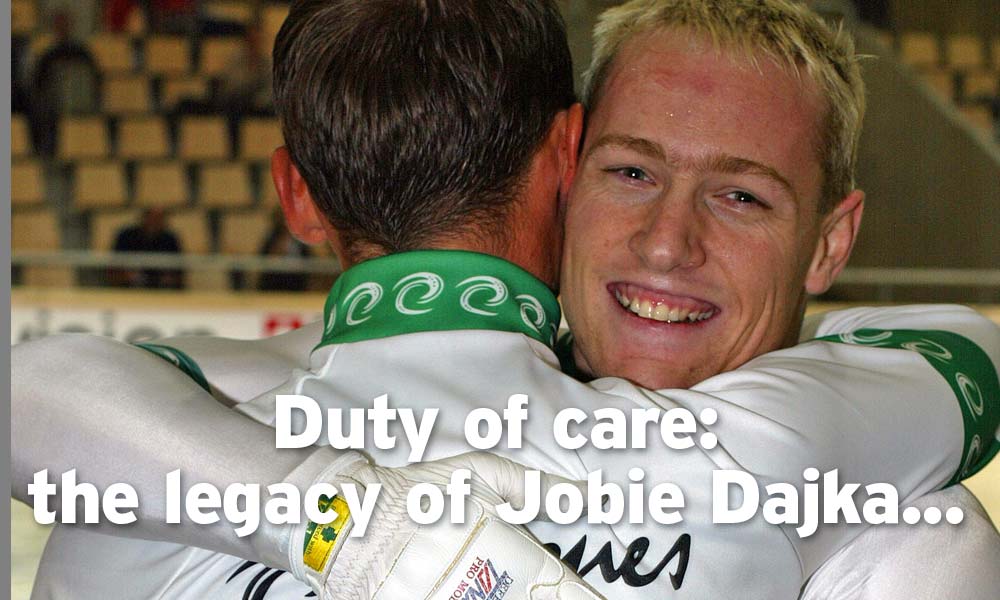 This is a flashback to a column written at the start of 2014 by Shary’n Halyday. It is a reminder of how important careful management of athletes is… before, during and after their sporting careers.

Our duty of care

Some athletes who have been idolised while they’re winning find it difficult to cope with what comes next. After the last race, the competition may really begin. The legacy of Jobie Dajka reminds us that not everyone wins from success.

There is nothing more important than the welfare of another living being. A small part of every single one of us subconsciously hopes that someone has our back. That we won’t be hurt physically or mentally, that we won’t be deceived, taken advantage of or mistreated and in turn we do our best to prevent such occurrences to others. We do this as a matter of course; to belong, to be a part of something and to have a sense of ourselves.

The sad reality is that for all the Maslowian ideals of belonging, we consciously hurt others mentally and/or physically with the cultures we have perpetuated within our sporting institutions.

A recent disagreement between Michael Drapac and Matthew Favier raises my gaze to the sad topic of athlete welfare; that and the plight of Ian Thorpe, an issue which was sadly was utterly predictable and possibly preventable if anyone had bothered to read the research and act.

Many of you may be aware that at a recent sporting event, Michael Drapac spoke of such a culture noting, “[Some] have lost their way.”

While the analogy was not lost on me – cycling as the enterprise to break down the model like post-industrial decay of the world of the peloton and its culture – consider this: our institutions lack the consciousness to really care for other living beings. 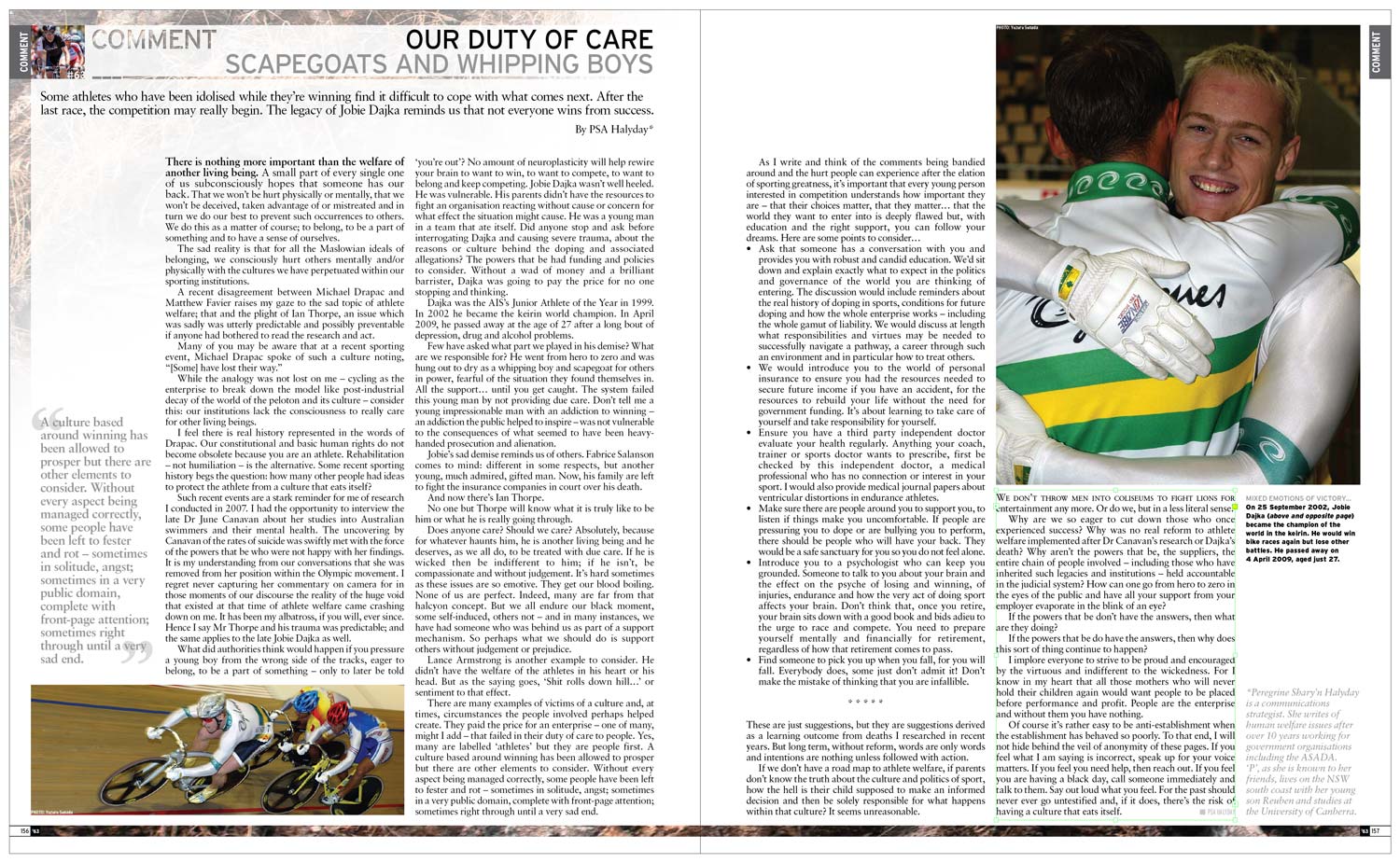 The feature as it appeared in the magazine early in 2014 (above).

I feel there is real history represented in the words of Drapac. Our constitutional and basic human rights do not become obsolete because you are an athlete.

Rehabilitation – not humiliation – is the alternative.

Some recent sporting history begs the question: how many other people had ideas to protect the athlete from a culture that eats itself?

Such recent events are a stark reminder for me of research I conducted in 2007. I had the opportunity to interview the late Dr June Canavan about her studies into Australian swimmers and their mental health. The uncovering by Canavan of the rates of suicide was swiftly met with the force of the powers that be who were not happy with her findings.

It is my understanding from our conversations that she was removed from her position within the Olympic movement. I regret never capturing her commentary on camera for in those moments of our discourse the reality of the huge void that existed at that time of athlete welfare came crashing down on me. It has been my albatross, if you will, ever since. Hence I say Mr Thorpe and his trauma was predictable; and the same applies to the late Jobie Dajka as well.

What did authorities think would happen if you pressure a young boy from the wrong side of the tracks, eager to belong, to be a part of something – only to later be told ‘you’re out’?

No amount of neuroplasticity will help rewire your brain to want to win, to want to compete, to want to belong and keep competing.

Jobie Dajka wasn’t well heeled. He was vulnerable. His parents didn’t have the resources to fight an organisation reacting without cause or concern for what effect the situation might cause. He was a young man in a team that ate itself.

Did anyone stop and ask before interrogating Dajka and causing severe trauma, about the reasons or culture behind the doping and associated allegations? The powers that be had funding and policies to consider. Without a wad of money and a brilliant barrister, Dajka was going to pay the price for no one stopping and thinking. 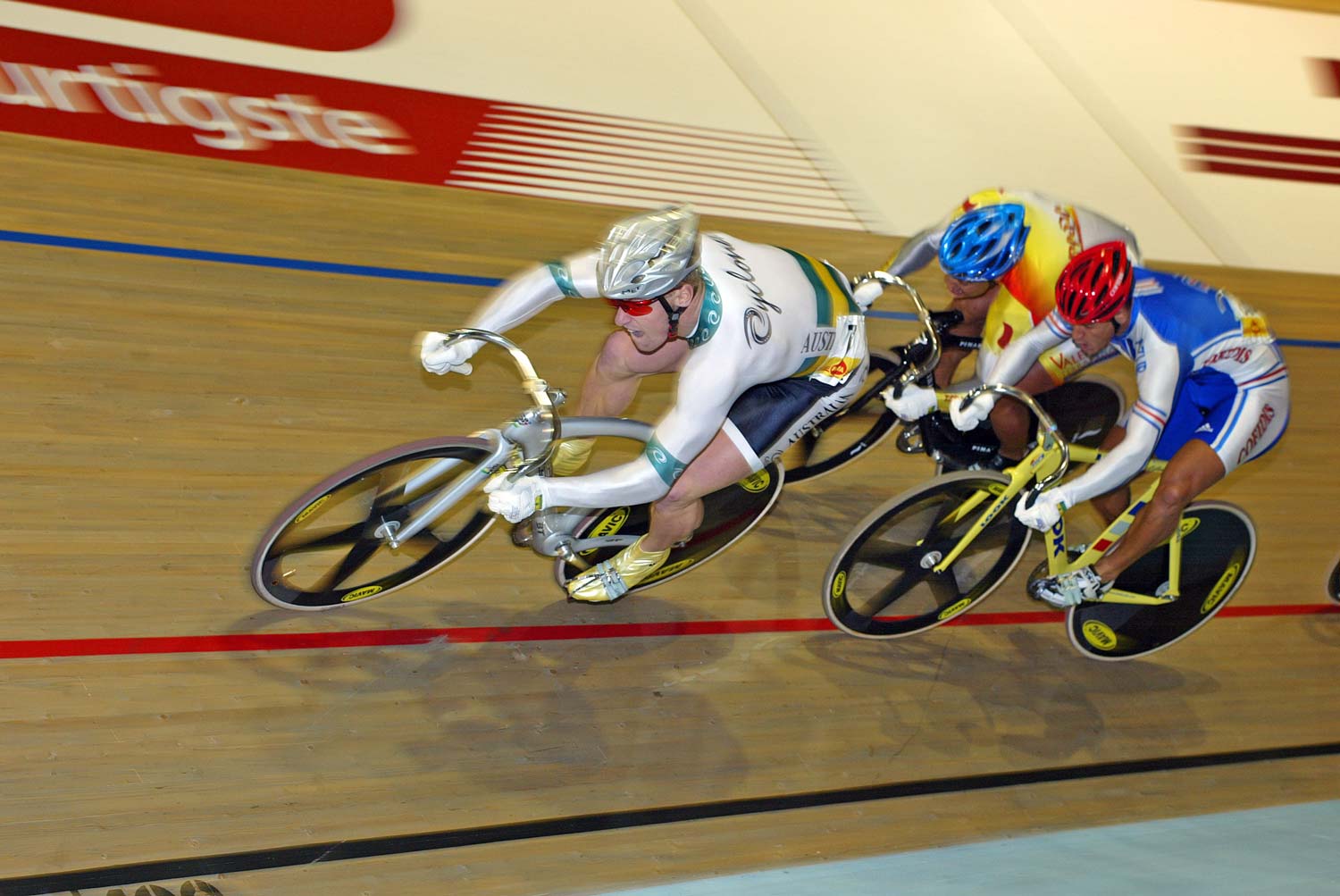 Mixed emotions of victory… On 25 September 2002, Jobie Dajka (above) became the champion of the world in the keirin. He would win bike races again but lose other battles. He passed away on 4 April 2009, aged just 27.

Dajka was the AIS’s Junior Athlete of the Year in 1999. In 2002 he became the keirin world champion. In April 2009, he passed away at the age of 27 after a long bout of depression, drug and alcohol problems.

Few have asked what part we played in his demise? What are we responsible for?

He went from hero to zero and was hung out to dry as a whipping boy and scapegoat for others in power, fearful of the situation they found themselves in.

All the support… until you get caught. The system failed this young man by not providing due care.

Don’t tell me a young impressionable man with an addiction to winning – an addiction the public helped to inspire – was not vulnerable to the consequences of what seemed to have been heavy-handed prosecution and alienation.

Jobie’s sad demise reminds us of others. Fabrice Salanson comes to mind: different in some respects, but another young, much admired, gifted man. Now, his family are left to fight the insurance companies in court over his death.

No one but Thorpe will know what it is truly like to be him or what he is really going through.

Does anyone care? Should we care? Absolutely, because for whatever haunts him, he is another living being and he deserves, as we all do, to be treated with due care. If he is wicked then be indifferent to him; if he isn’t, be compassionate and without judgement.

It’s hard sometimes as these issues are so emotive. They get our blood boiling.

None of us are perfect. Indeed, many are far from that halcyon concept. But we all endure our black moment, some self-induced, others not – and in many instances, we have had someone who was behind us as part of a support mechanism. So perhaps what we should do is support others without judgement or prejudice.

Lance Armstrong is another example to consider. He didn’t have the welfare of the athletes in his heart or his head. But as the saying goes, ‘Shit rolls down hill…’ or sentiment to that effect.

There are many examples of victims of a culture and, at times, circumstances the people involved perhaps helped create. They paid the price for an enterprise – one of many, might I add – that failed in their duty of care to people. Yes, many are labelled ‘athletes’ but they are people first. A culture based around winning has been allowed to prosper but there are other elements to consider. Without every aspect being managed correctly, some people have been left to fester and rot – sometimes in solitude, angst; sometimes in a very public domain, complete with front-page attention; sometimes right through until a very sad end.

As I write and think of the comments being bandied around and the hurt people can experience after the elation of sporting greatness, it’s important that every young person interested in competition understands how important they are – that their choices matter, that they matter… that the world they want to enter into is deeply flawed but, with education and the right support, you can follow your dreams. Here are some points to consider…

These are just suggestions, but they are suggestions derived as a learning outcome from deaths I researched in recent years. But long term, without reform, words are only words and intentions are nothing unless followed with action.

If we don’t have a road map to athlete welfare, if parents don’t know the truth about the culture and politics of sport, how the hell is their child supposed to make an informed decision and then be solely responsible for what happens within that culture? It seems unreasonable.

We don’t throw men into coliseums to fight lions for entertainment any more. Or do we, but in a less literal sense?

Why are we so eager to cut down those who once experienced success?

Why was no real reform to athlete welfare implemented after Dr Canavan’s research or Dajka’s death?

Why aren’t the powers that be, the suppliers, the entire chain of people involved – including those who have inherited such legacies and institutions – held accountable in the judicial system?

How can one go from hero to zero in the eyes of the public and have all your support from your employer evaporate in the blink of an eye?

If the powers that be don’t have the answers, then what are they doing?

If the powers that be do have the answers, then why does this sort of thing continue to happen?

I implore everyone to strive to be proud and encouraged by the virtuous and indifferent to the wickedness. For I know in my heart that all those mothers who will never hold their children again would want people to be placed before performance and profit. People are the enterprise and without them you have nothing.

Of course it’s rather easy to be anti-establishment when the establishment has behaved so poorly. To that end, I will not hide behind the veil of anonymity of these pages. If you feel what I am saying is incorrect, speak up for your voice matters. If you feel you need help, then reach out.

If you feel you are having a black day, call someone immediately and talk to them. Say out loud what you feel. For the past should never ever go untestified and, if it does, there’s the risk of having a culture that eats itself.