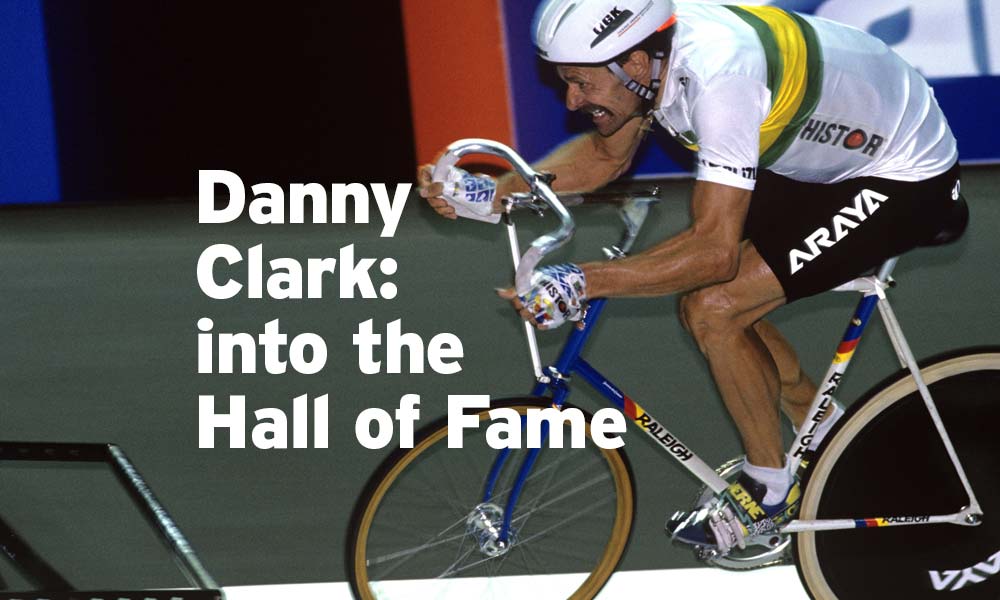 Danny Clark interview: “I train just as hard as I did when I was a professional”

RIDE Media caught up quickly with Danny Clark on the day it was announced that he would be inducted into the Cycling Australia ‘Hall of Fame’.

“I’d love to do it, of course,” gushes a 67-year-old Danny Clark. He’s talking about the Melbourne Six-Day race next February and it’s clear he’s not kidding. He’s a confident man who continues to ride his bike as often as he can, and even race it well into his senior years. But when talk turns to the possibility of returning to compete at an elite level, as part of a Six-Day race in Australia, he goes a little coy.

It’s not shyness, that’s not Danny’s style. He is too forward to step backwards. But when I tempt him, even jokingly, with the thought of even considering lining up to take on the young guns in 2019 it’s clear that the thought entertains him.

Then he pauses, stretches his legs, remembers his past, considers his future… and keeps on talking about the concept. “I’d love to race it even if I was 80 years of age,” he says. “I’d still love to do it.

“It’s just that I love cycling and that’s what I’m still doing now.

“I live my life for the bike, every day, even now. So, I always think I can do something, but the body tells me different sometimes.”

Once a cyclist, always a cyclist. That’s how it is for the famous Tasmanian who now lives on the Gold Coast. Racing at an elite level took him through to around the age of 50 and just because he stopped competing for a job, it doesn’t mean he’s slowed down… not much at least.

He’s still out there, on the bike, enjoying himself and still racing when he gets the chance. 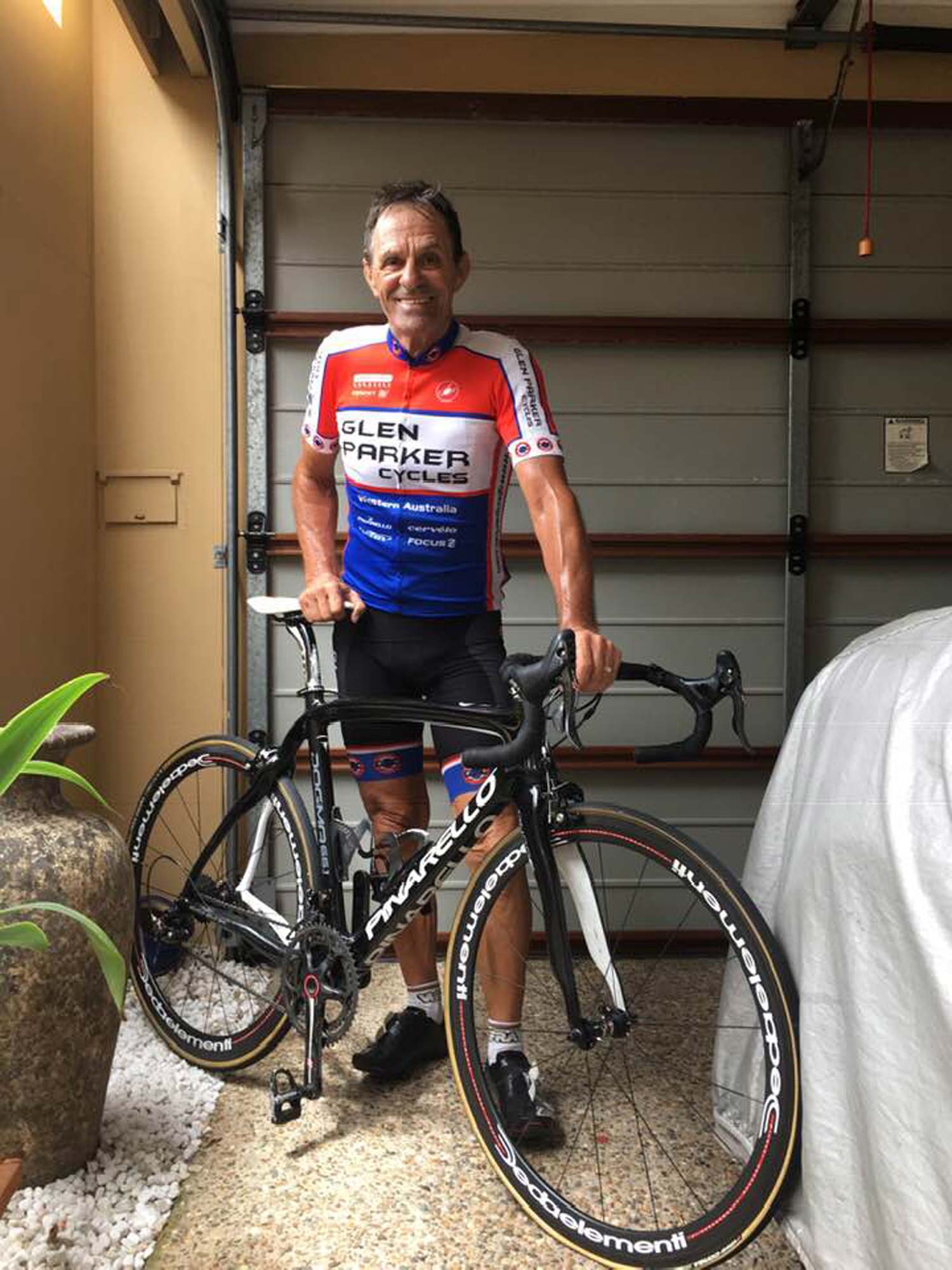 Danny Clark (above): once a rider, always a rider.

This month Danny Clark be inducted into Cycling Australia’s Hall of Fame. The four nominations for 2018 include Clark, two other former riders, Michelle Ferris and Mike Turtur, as well as MTB trails pioneer, Glen Jacobs.

It took only a few years for Clark to make the cut, many believing he ought to have been part of the inaugural inductees, but he’s pleased to receive the acknowledgment at the end of the first year since the arrival of Steven Drake as CEO of Cycling Australia.

“I’ve been racing for a long time and it’s a nice honour to have at this time of my career,” says Clark. “Yeah, it’s great.”

He’s happy to talk but he’s happier when he’s riding his bike. And it doesn’t take long for him to remind anyone who wants to listen, that cycling is not just part of his life, it is his life. 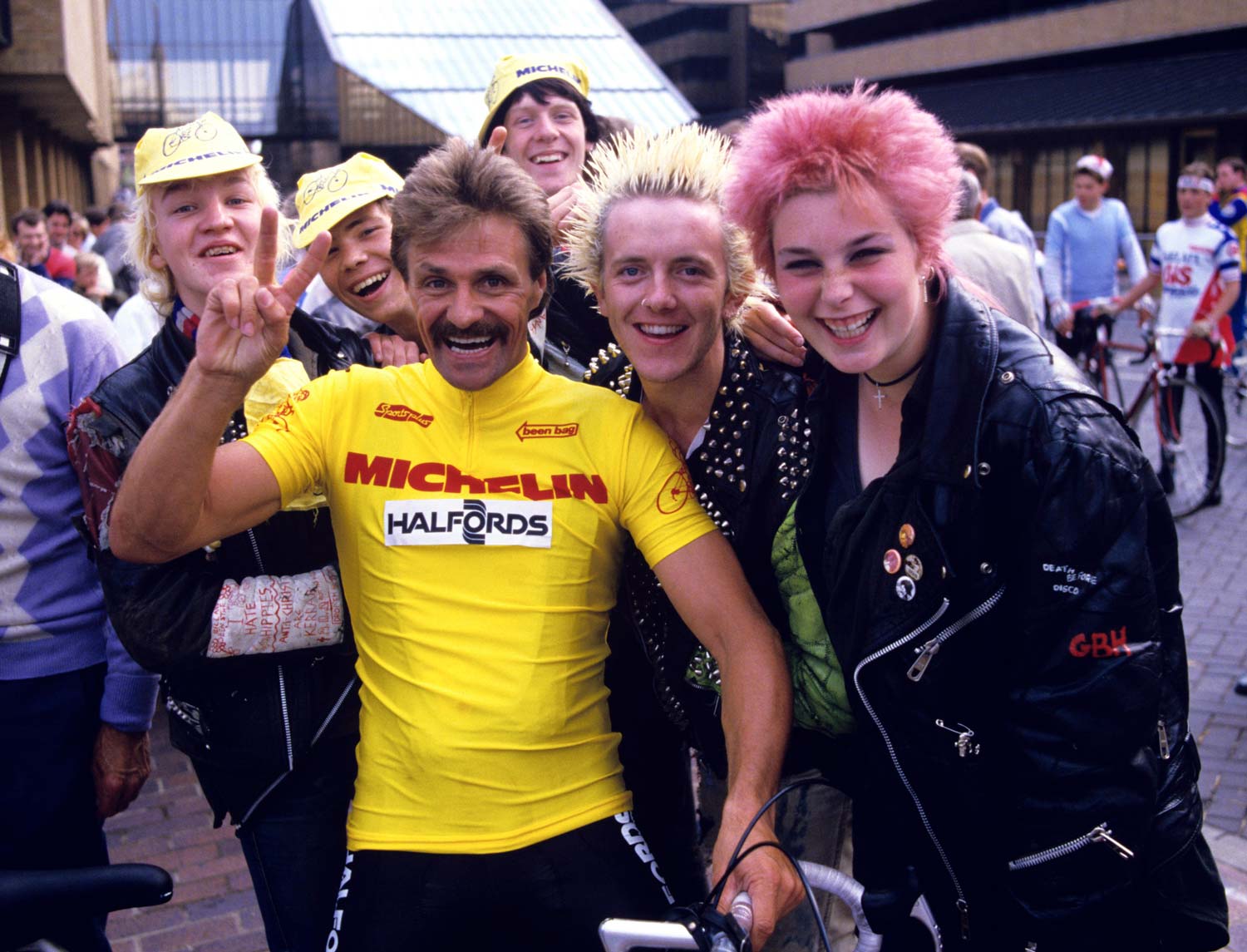 On the road and track, Clark was always able to bring in the crowds.

“I train just as hard as I did when I was a professional,” says the 67-year-old.

“In the summer in Italy, I do a lot of masters racing, and I still do a lot of racing around here. So, you have to keep pretty fit when you’re racing against these young guys.”

He still calls it “training”. He still races. And he still gives his rivals a hard time. He is a natural born competitor and, in case you missed seeing him race during his prime, there is footage to be found of him plying his craft.

Click the link below and marvel at what Clark does to his rivals in Burnie in 1977. He toys with them, allowing them to think they’ve got him beat… and then he pounces, up to top speed and into the lead. It’s a gorgeous cycling clip, one for the ages. 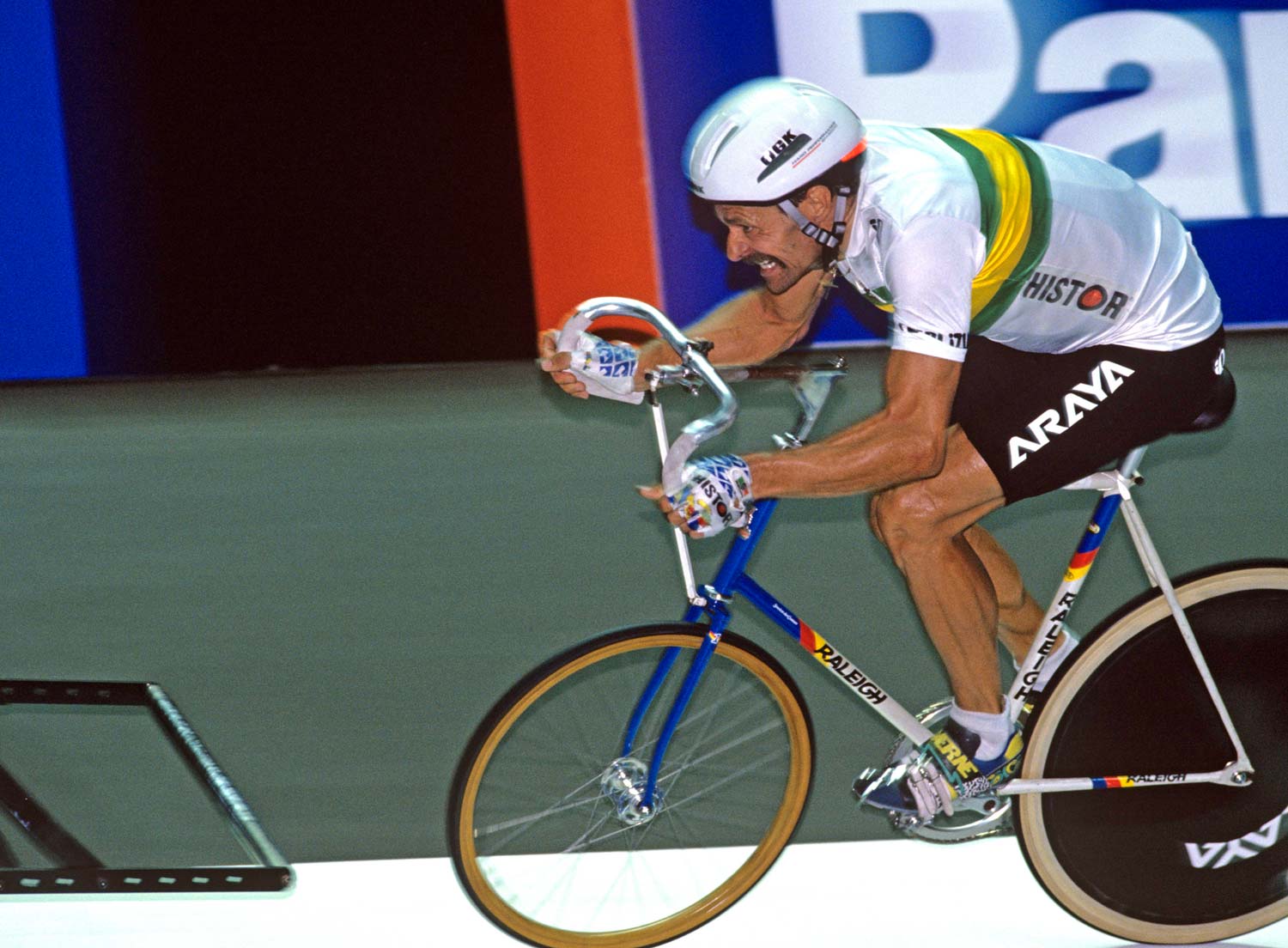 Clark in a motorpace event in the 1980s.

There are many highlights in a career that spanned close to 30 years. And that Burnie Wheelrace comes to mind when asked to list some of the most memorable competition.

“I just think my Six-Day career and the way I won a lot of the races… it’s hard to say which was the real highlight.

“A lot of races mean so much to me and whether it’s the Burnie Wheelrace of 1977, the Olympic silver medal (for the ‘kilo’ in 1972), world titles or European titles, or Six-Day events…”

What made his wins special? His strength, speed, determination and sheer grit to push past the pain barrier. “At a lot of the Six-Day events, I had cramp really bad in my legs,” he says.

“All through my career I’ve had really bad troubles with cramps. I’ve won world titles with cramps, I’ve won Six-Days with cramps and even those races put more memories into me because I really shouldn’t have won – and yet I did.” 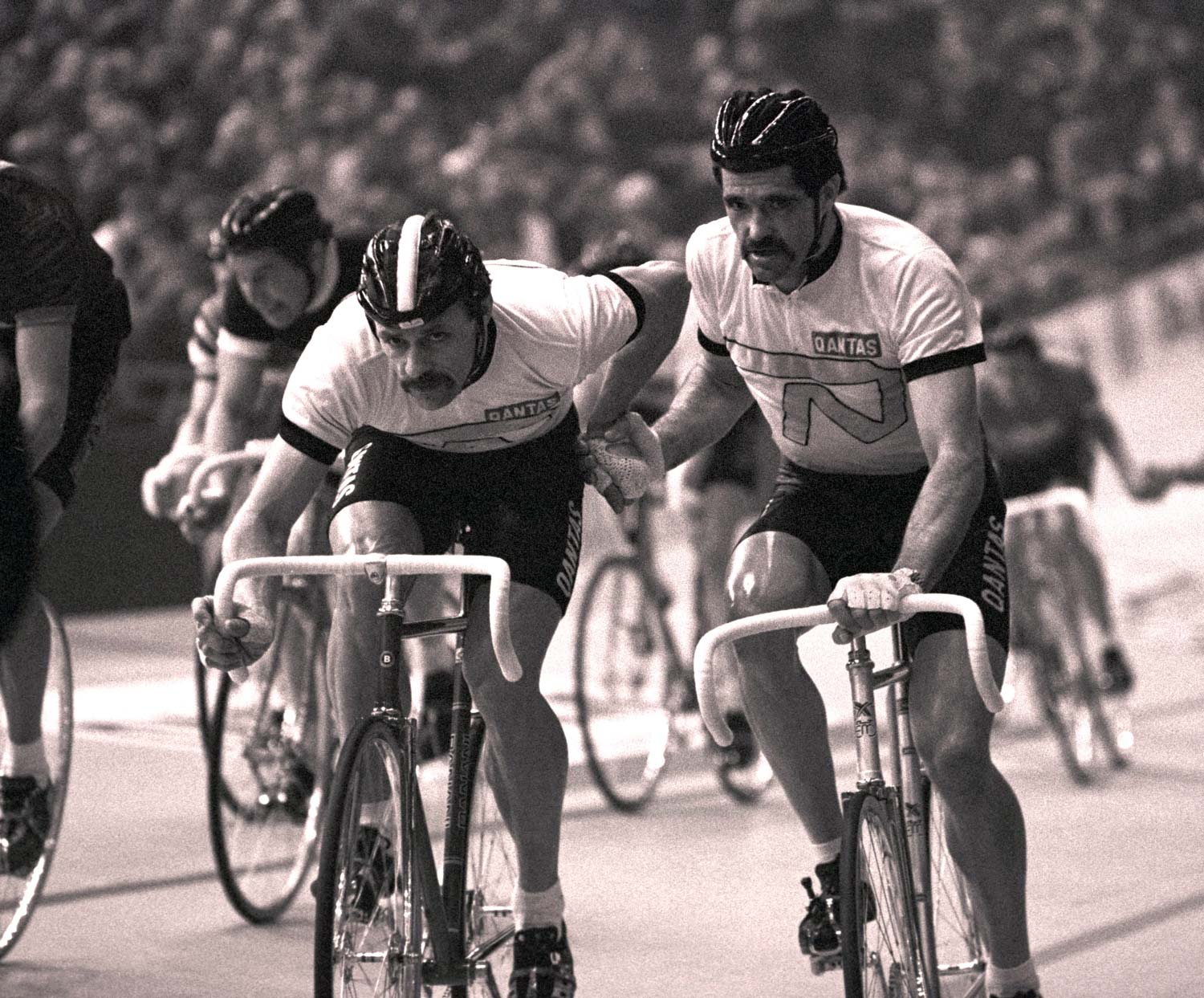 Of all the bike riders I’ve interviewed, Danny Clark is arguably the one I’m most anxious to talk to, largely because of the reality that when I first saw him race he seemed a larger than life figure. He also still carries a certain aura with him and yet, in person, he’s an absolute pleasure to talk to.

Friendly, funny, yet confident while also willing to show his vulnerability. He has learned a thing or two over the years and certainly made the most of the gift he was given. Racing his bike has taken him around the world and given him an income and although he’s no longer racing for money, he still does it with conviction. He does it because he loves it, but he also believes in the approach of trying everything, not categorising yourself, not limiting your options.

“It surprises me sometimes, as I keep racing, that I’m as strong as I am the older I get.

“I’m just proud that I’ve been able to race so long and so good – in every age group, in every event, road and track. That’s just the way I look at it…

“One person I’ve really tried to emulate is my hero, Russell Mockridge. I always wanted to be like him – I wanted to be somebody who can race every single event, whether it’s on the road or track.

“I just wanted to be a really good all-rounder and that’s kind of what I did.

“I’ve never specialised in any event particularly, and he’s just a hero of mine and that’s what I wanted to be like. And I’ve done my whole career like that.”

Mockridge remains one of the Australian greats. He was one of the originals in the Hall of Fame. Danny Clark will soon join his idol. 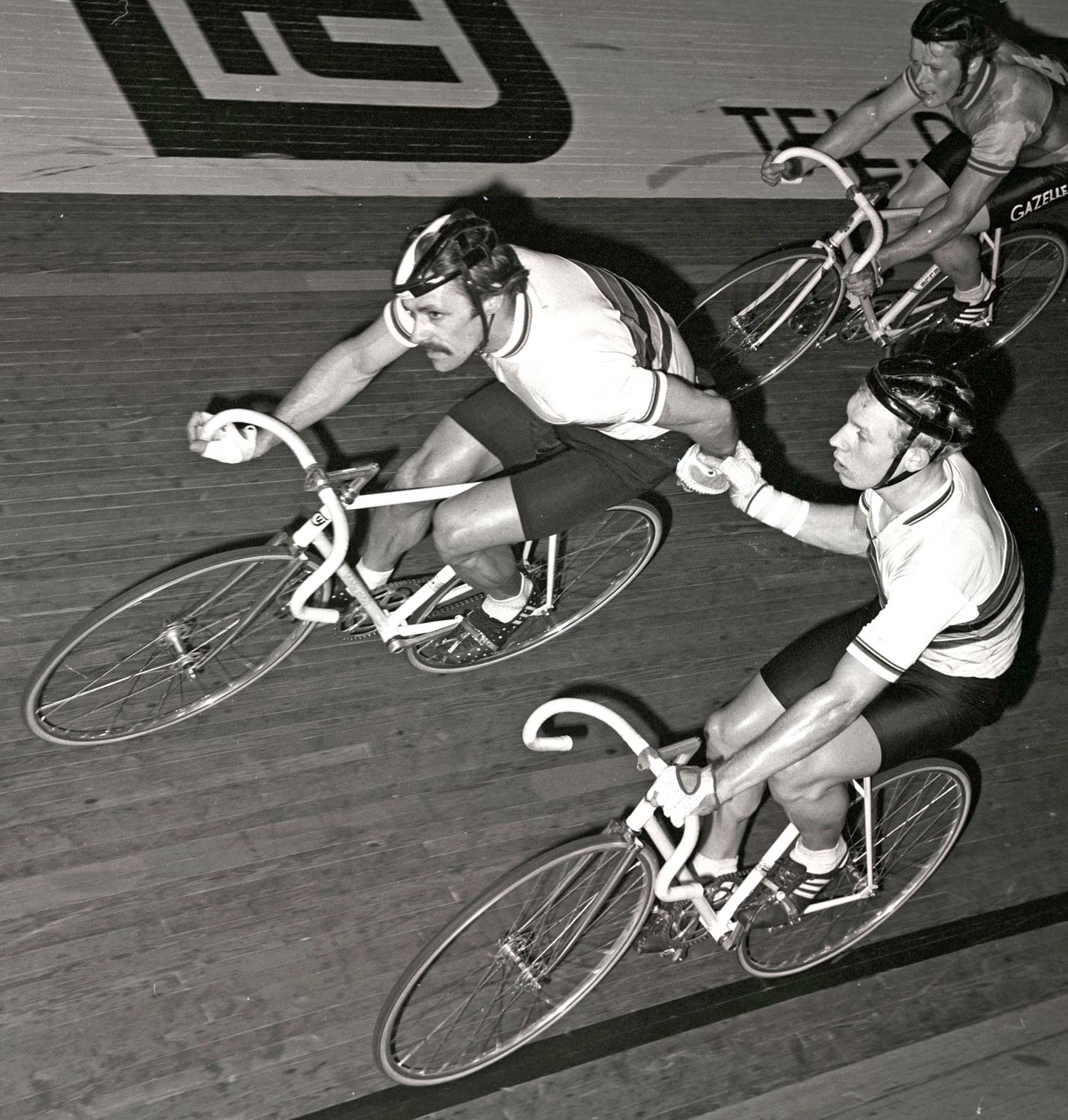 Masters of the Six-Day circuit… Clark and Etienne De Wilde.

The Tasmanian was one of the finest cyclists of his generation and he tried a little bit of every discipline. He competed on the road – but events like the Tour de France eluded him – and enjoyed plenty of success but it was the track that captured his competitive heart the most. He is one of the best Six-Day racers of all time and he believes much of his success came from being diverse.

That broad approach is no longer encouraged. “On the track,” he says, “you have the Olympic Games and all these World Cups, but a lot of the good riders really don’t go and do all of the local races that much. Whereas in the old days, that’s all we did. Everybody raced everything.

“Now there’s a lot of specialising and you now have the sprinters, and they do their thing. The pursuiters do their thing. Years ago, everybody did everything and that was quite exciting.

“I think a lot of these races all around Australia need all the good riders in them, but they’re not getting all the good riders all the time and so, as a spectacle sport, there are only one or two races that people really go and watch – that’s a little bit disappointing too.”

We have agreed to catch up again later this month, on the day he is officially inducted into the Cycling Australia Hall of Fame. To list all the reasons why he earned that honour would take considerable time and although Danny Clark likes to talk, he doesn’t like to sit still long enough to tell all of the stories he has gathered over the years.

He’d rather ride his bike. There’s “training” to do, he’ll tell you. And now that he has been reminded about the upcoming Melbourne Six-Day, I get the impression that he was ready to cut our conversation short so he could work on his form… just in case he gets the call up.

“Oh,” he gasps when asked if he’d like to race in the Melbourne six, “deep down inside, yes! But I don’t think anybody would want a 67-year-old bloke riding a Six-Days.”

Maybe that’s true… to an extent. Tell the crowd, however, that the 67-year-old is Danny Clark and they may come back night after night. He was, after all, always an entertainer.