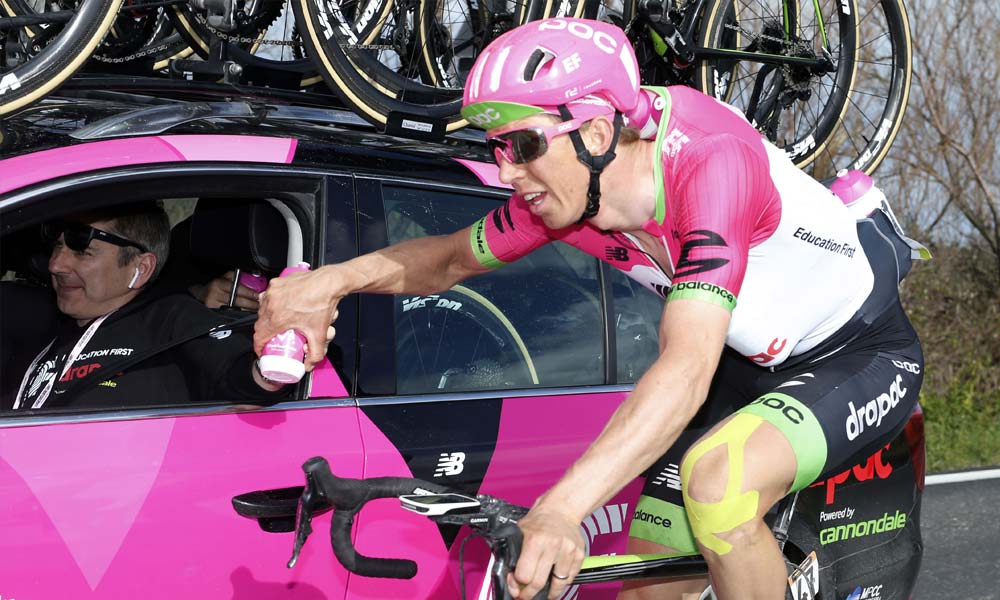 Drapac on Roubaix: “There’s no other sporting event that matches it”

We talk to a co-sponsor of a team with a favourite for Paris-Roubaix and ask about his experience in the team car at last year’s race. Michael Drapac says: “There’s nothing that comes close to being at Paris-Roubaix. Nothing!”

If you’re a sport fan with a healthy budget, it’s possible to do extraordinary things and see a contest from a privileged perspective. Michael Drapac has invested millions into cycling over the years and he’s done so for myriad reasons. It began largely because his children enjoyed the sport and, these days, his sponsorship association with the Slipstream team is about raising the profile of his property development group, Drapac Capital.

After many years of association, Drapac remains passionate about cycling but it’s actually his second sporting love after horse racing. Still, he says, “There’s nothing that comes close to being at Paris-Roubaix. Nothing! There’s no other sporting event that matches it.”

He has been to every Melbourne Cup for the past 44 years and, “I can’t imagine anything would be much more thrilling than winning the Melbourne Cup” but, in terms of spectator engagement, the bike race that will be contested for the 116th time on Sunday, eclipses every other sporting contest Drapac has witnessed.

“They’re different events,” he says when asked to compare two events that are close to his heart. “The Melbourne Cup is extraordinary for so many reasons. If you really understand horse racing, you see the complexity in the lead-up.

“It’s a great thing to watch. But it lasts for three minutes and 22 seconds or something…” Meanwhile, Paris-Roubaix is compelling for around seven hours. After having spent the 2017 race in the passenger seat of his team’s car Drapac has a better understanding of what’s involved in this gladiatorial-style contest. 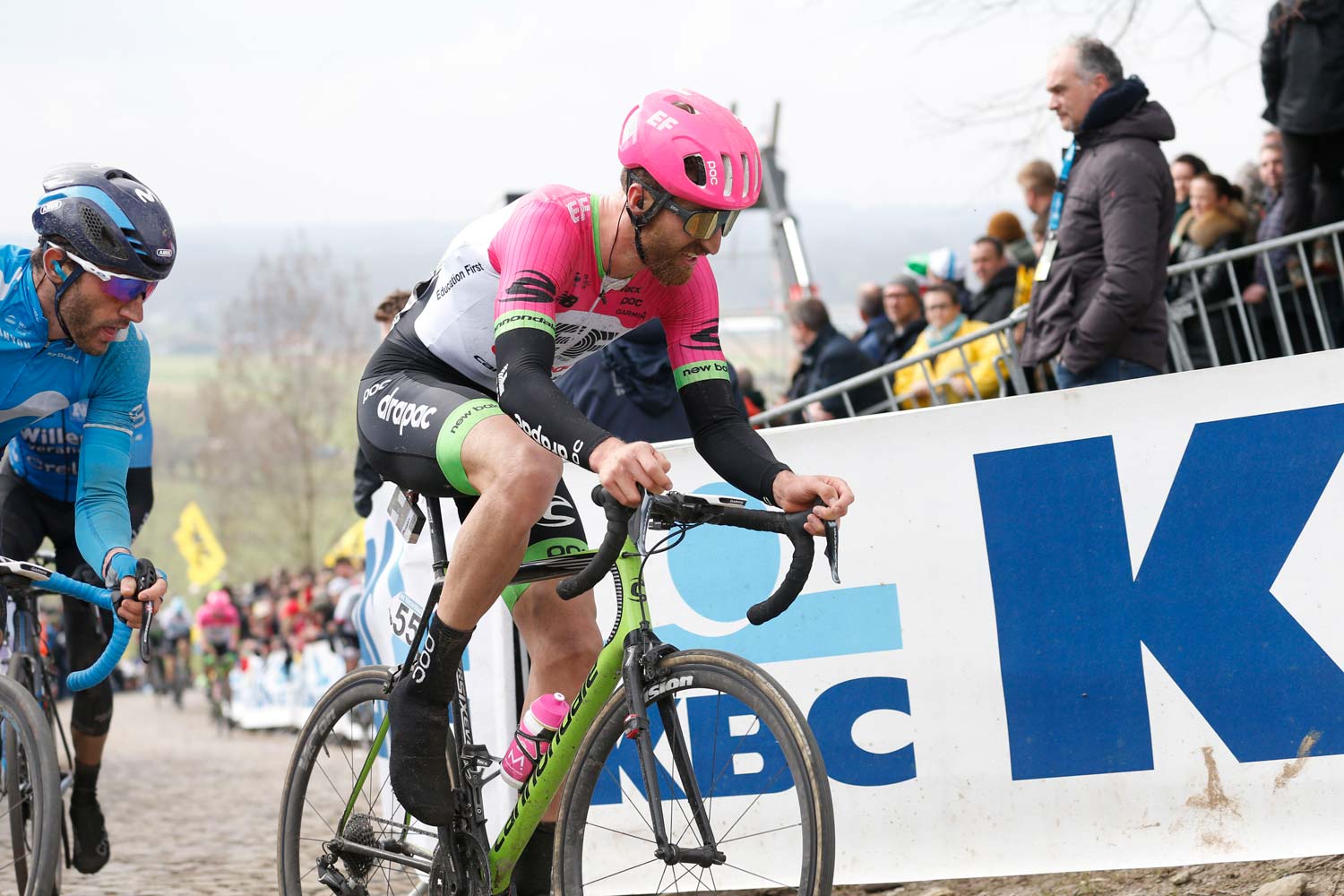 Taylor Phinney (above) missed Paris-Roubaix in 2017 due to concussion sustained before the race but he is part of the seven-man EF-Drapac line-up in 2018.

A long-time resident of Melbourne, he’s attended AFL Grand Finals and says he lucky enough to have seen several football World Cup matches over the years. He has attended the US Open golf tournament and, thanks to growing business interests in the United States, experienced first-hand what it’s like to see basketball and NFL games.

Paris-Roubaix, however, is more captivating than them all – especially when seen from inside the convoy.

This year the team is known as ‘EF Education First-Drapac powered by Cannondale’. The riders’ outfits are bright pink and luminous green. It’s hard to miss them in the peloton. And the team’s vehicle fleet has come of age in 2018. A bright Tesla with EF and Drapac logos stickered all over it has been seen at the Classics in recent weeks. It’s a step up from last year when the team’s manager Jonathan Vaughters had been heard complaining about the cost of replacing tyres on the team cars.

It remains to be seen if the Tesla gets a workout on the cobblestones of northern France. Judging on the commentary offered by Drapac when asked about his day in the convoy on the road between Compiegne and Roubaix, it would be fair to assume that one of the cheaper cars in the fleet will be utilised on Sunday.

“I had one request and that was that I wanted to be in the team car,” says Drapac about specific stipulations that he put on his investment in the WorldTour team. “I’ve seen numerous editions of Paris-Roubaix but only on the TV screen.” Last year, several months after the announcement that Drapac would be a co-sponsor of the US-registered team, he made the trip to France in early April. “It’s one of those things that I wanted to experience.”

The television images share much of the action but in an event like Paris-Roubaix there are stories unfolding well out of focus of the cameras. A day in any team car provides a buzz and makes for a memorable day. (Even relatively rudimentary stages early in the season provide a glimpse of the chaos of the pro peloton… click here for a glimpse inside the EF-Drapac team car for the first WorldTour race of 2018.) 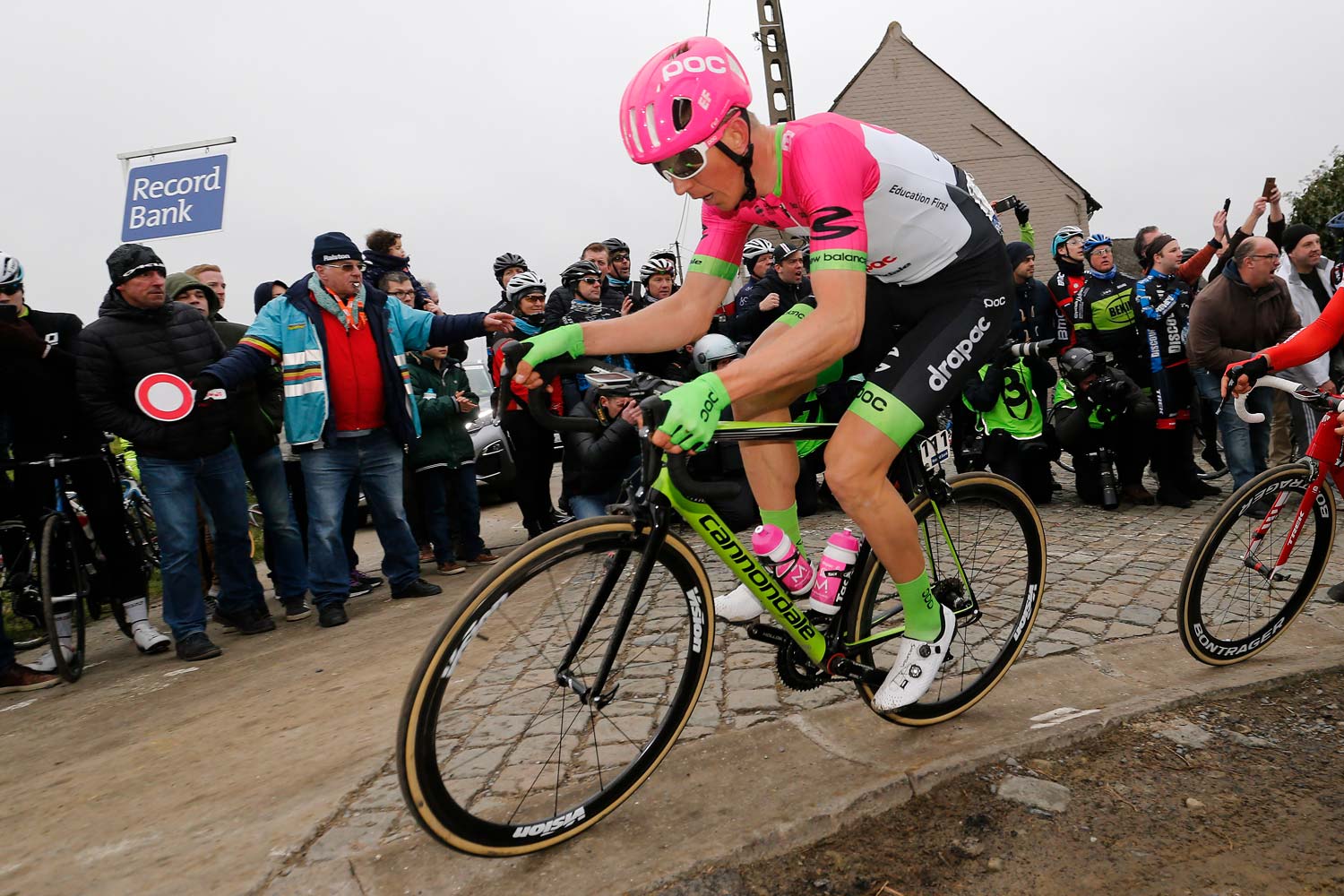 Sep Vanmarcke (above) is EF Education First-Drapac’s star rider for the cobbled Classics.

Michael Drapac has seen a few races from the passenger seat in the past, but the Roubaix experience is easily his most memorable.

“To be sitting in the front seat, with the team director Andreas Klier at the wheel, and to experience nearly seven hours of that intensity and all the colours and complexities that go with it… it’ll never be forgotten.”

Riders will tell you that, even on the relatively smooth roads of the opening hours, the pace is frenetic and the mood of the peloton different to other races. Inside the team car, Drapac says, it’s almost as intense. “Every time you hit those cobbles, the drama is escalated by about a factor of 10. That’s where a lot of pressure is put on. You can see the anxiety in the riders’ faces.

“It’s heartbreaking for some of the riders,” says Drapac. “I remember when Luke Durbridge came down and I remember driving past him and I could see the pain on his face. It was a remarkable image that’s difficult to forget. You could see something extraordinary from such close proximity: emotional pain as much as physical pain.

“There is this apprehension as you hit the cobbles and when you drive past the riders. You can just see this expression that you see at no other time. It’s unlike any other bike race in terms of even the mood of the riders.”

He will miss being in the team car for this year’s race but the memories of that day in April 2017 seem as vivid as they were on the day. 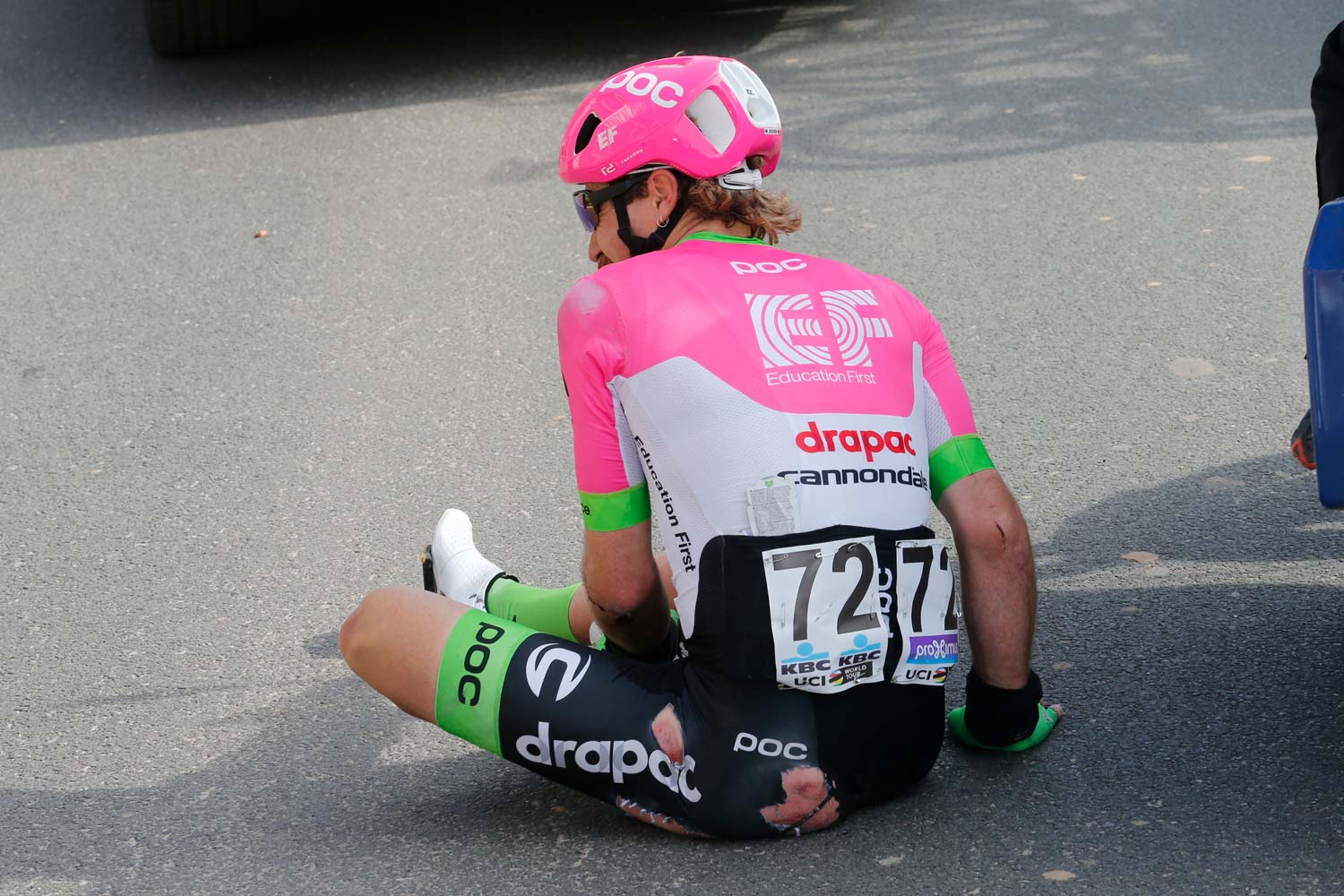 Mitch Docker (above) has crashed in Milan-Sanremo, Gent-Wevelgem and the Tour of Flanders in 2018… but he cannot resist the lure of Paris-Roubaix. He’ll be at the start in Compiegne on Sunday.

“The cobbles are uneven and there’s corrugations and so much to take in,” he says.

“I was actually watching the riders navigate between some of the cobbles. Often, they would ride on the edge of the cobbles but for the drivers of the car it’s extremely intense once you’re on the cobbles.

“The reason the directeurs sportif have got to be hyper-alert is because riders are suddenly bouncing half-a-metre across the road because they’ve hit a cobble or they’re trying to avoid a big cobble.

“I can’t tell you how many times we went within – without exaggerating – just inches of a rider and there was just nowhere else to go. The roads with the cobbles are very, very narrow. You think to yourself, ‘How is it possible that every rider hasn’t fallen numerable times?’”

It’s a harrowing setting and one that’s not for the feint-hearted, even those who are watching from inside a team car. “When there’s a delay or you’re caught up behind a crash or something and then you’ve got to catch up with the peloton, you’re driving at up to 90-100km/h at times over those stones. The intensity is just indescribable. It’s so intense for every second you’re on those cobbles.”

Drapac will be tuning in from afar this year and he has high hopes for his team’s Classics specialist, Sep Vanmarcke. He concludes our discussion about his day in the team car with a comment about what we can expect from the 116th edition. “Paris-Roubaix requires a lot of tenacity, a lot of extraordinary ability, and always a modicum of luck. I think that, as long as Sep doesn’t experience any bad luck he will be there at the end.

“He is a very courageous bike rider… Put it this way, it won’t be left to chance. He will give everything – the full 100 percent – and I think the team will be 100 percent behind him. He is going to be at the pointy end of the race.”

– The 2018 edition of Paris-Roubaix will be broadcast live in Australia on SBS Viceland from 9.30pm. Follow the action and join the commentary: #SBScycling –