After three stages of the 2021 Tour de France there are already six abandons, all of them because of injuries sustained in crashes. Caleb Ewan and Jack Haig are the two Australian casualties.

Watch the highlights with the knowledge that it’s not going to be pretty. Stage three had many lowlights and the reason is simple: crashes on roads which are, frankly, inappropriate for an event like this. The prestige of the Tour de France almost insists that participants give their all, but when the ‘arena’ is not big enough for all the players, carnage is the result.

Reviewing the third stage of the 108th Tour de France is less about scrolling down the results pages and finding out who did well and who faltered, instead it’s the injury report that tells the story.

A fractured collarbone for Caleb Ewan ends his campaign after just three days. The winner of five stages from his first two TDF starts crashed within sight of the line; coming through a slight right-hand bend inside the final 500m, he touched the rear wheel of eventual stage winner Tim Merlier (Alpecin-Fenix)… and so concludes the 26-year-old’s 2021 Tour campaign.

“I don’t remember too much,” said Ewan in a video message posted by his Lotto Soudal team.

“Hopefully La Vuelta can still be a goal of mine this year”, says @CalebEwan after his collarbone fracture in #TDF2021 – operation to follow on Wednesday. pic.twitter.com/T2tV7AQ7Fv

“I wanted to go quite early,” he says of the sprint for stage honours. “We were sprinting on the left and then I started and saw that the guys at the front were going to the right, so I had to stop sprinting and then hope it would open up again.

“I think, when all that happened, I came next to Peter [Sagan] and we were quite close together… when Merlier went, again to the right, I touched a wheel and went down.

“It all happened quite quickly.

“Usually when you crash you don’t feel so much,” he continued. “The adrenaline is there but straight away I felt a lot of pain and they were pressing on my collarbone and I could feel it clicking, so I thought, ‘It’s not good.’

“It’s the first bone I’ve ever broken but they told me it’s broken in four spots. I don’t know, to be honest, too much of the details but I have to get some surgery on it to put it back into place but I think, out of any bone to be broken, it’s one of the ones that’s easiest to come back [from], recovery wise.”

Ewan was the designated leader of the Belgian-registered Lotto Soudal team for the 2021 Tour de France, and he is the latest to abandon a race that’s had many highlights in the opening days. Alas, the numerous significant crashes are going to be what the start of the race will be remembered for.

Mathieu van der Poel, one of the good news items of #TDF2021, continues to lead the general classification with an advantage of eight seconds over the winner of stage one, Julien Alaphilippe, with the Ecuadorian from Ineos Grenadiers, Richard Carapaz, the best ranked of the GC specialists in third place overall, at 31 seconds.

Scrolling down the stage results does highlight some of the other news from the crash-marred third stage as it was far from a standard scenario for a flat stage and a sprint finish.

Last year’s runner-up, Primoz Roglic, was heavily impacted by a crash that forced the Jumbo-Visma team to drop back in an attempt to pace the Slovenian superstar back to the front group. Despite the strength of the riders from the Dutch squad, it wasn’t possible for him to rejoin other GC riders who escaped the chaos.

Roglic’s chase was slowed by the need to weave through fallen riders who littered the road on the way to Pontivy.

Jack Haig, another Australian team leader, is one of the other DNFs from stage three. He was caught in a crash and also fractured a collarbone. 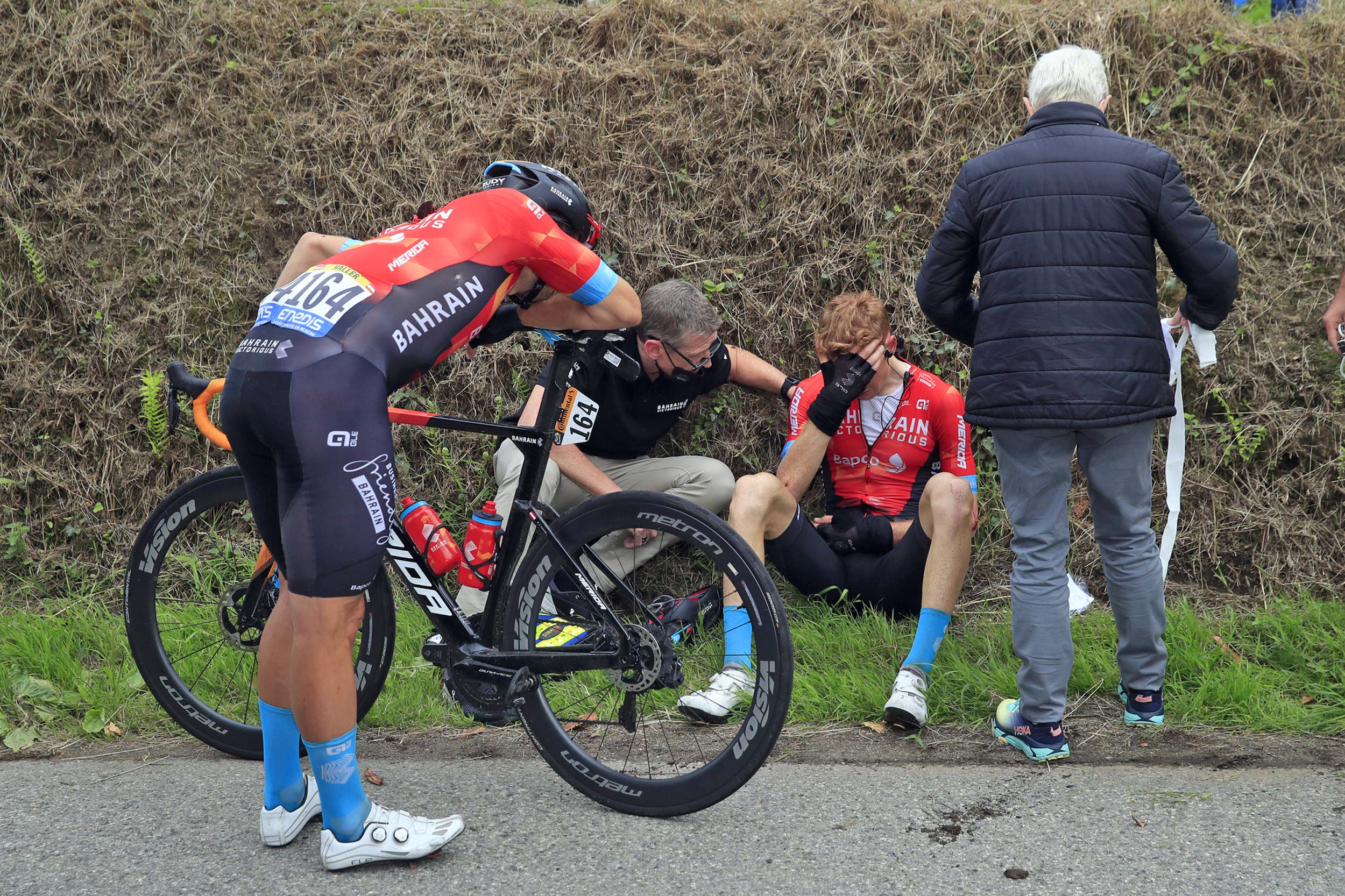 “Jack suffered a fractured left collarbone and concussion following the crash,” explained his Bahrain-Victorious team in a statement.

“He is conscious and okay and scans showed no head trauma. He will remain in hospital overnight for observation following the team and UCI protocols.”

For now, it’s time for many teams to reassess their approach and for the organisers of the Tour de France to respond to calls for consideration of riders’ safety when planning the route.

There have been plenty of strongly worded messages shared on social media and much of the blame for the crashes in stage three is directed squarely at the Tour organisers for failing to find roads that are suitable for a peloton that was originally 184-strong. It has been whittled down to 178 after three stages and many of those still competing are carrying injuries from incidents in the opening stanza of a race hugely impacted by crashes.