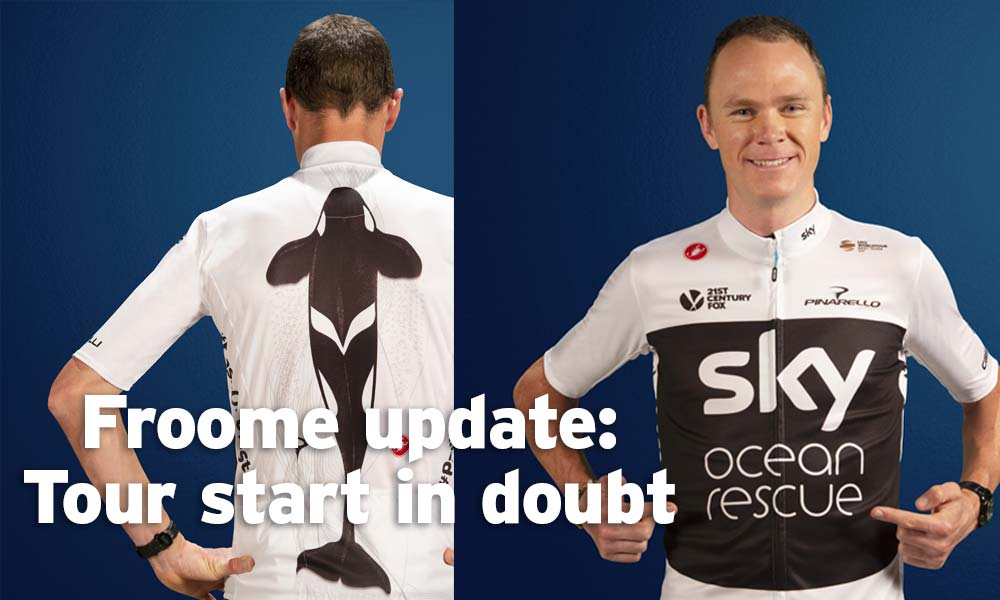 Chris Froome’s participation in the 2018 Tour de France is in doubt now that action has apparently been taken to hinder the defending champion’s right to sign on for the race which begins on 7 July.

The Tour de France begins next Saturday and the final week of preparation for the defending champion will have a lot less to do with riding a bike than he would have liked. In ideal circumstances, Chris Froome would be at the start to see if he can win a fifth title on a course that suits his strengths. Usually we would be writing about the composition of his team and who the main rivals are. But since December 2017 things have been far from ideal in this realm of professional cycling.

The sport has been in limbo for the seven months it took before someone decided to make a ruling on a case that has had no timeframe imposed on it.

Although no official release has been issued by ASO, organisers of the Tour de France, it has been reported by Le Monde – and, subsequently, numerous other media outlets – that there is an action in place to deny Froome his place in the race.

“The organiser relies on article 29.1 of its rules which, in accordance with the rules of the International Cycling Union (UCI) which, ‘expressly reserves the right to refuse participation in – or to exclude from – the event, a team or any of its members whose presence would be such as to damage the image or reputation of ASO or the event’.”

It has been done before and ASO is striving to do it again. They have banned others from starting the Tour because of the risk of race’s reputation; and it could happen to Froome too.

There is logic at play here and it’s going to be an interesting five days in the lead-up to the opening stage.

Team Sky hasn’t issued a release in response to the article in Le Monde, unlike last week when it retaliated to an online post offering commentary by Bernard Hinault which suggested Froome should not be allowed to start the Tour.

It has been reported, however, that there is an appeal being lodged on Tuesday 3 July with a decision said to be issued the following day.

Since news of Froome’s adverse analytical finding for a Salbutamol test at the 2017 Vuelta a España broke last December, this is the first true instance of any sense of urgency being applied to ensure a resolution is found. It has forced a response from the team that has maintained its support of the four-time Tour champion.

It is no surprise that the ASO has acted the way it has. For months, there have been calls to find a resolution to the matter to prevent there being the need for retrospective changes to results of races Froome contests since his AAF was made public. As it already stands, we still aren’t certain that the titles of the 2017 Vuelta and 2018 Giro d’Italia will stand the test of time.

There are examples of riders who are under investigation while still being allowed to compete, winning races only to subsequently be denoted by an asterisk in the official records. Alberto Contador famously won the 2010 Tour de France and returned a positive test for Clenbuterol; his case dragged on long enough for him to be able to contest both the Giro and Tour in 2011. He won the title in Italy, and finished fifth in France… and months later, when the WADA made its decision, his Giro crown was removed. The runner-up that year, the late Michele Scarponi, is officially listed as the winner.

Team Sky continues to support Froome and while it hasn’t offered an official response to the story in Le Monde, The Independent has reported that Sky expect Froome will be able to race in July. “We are confident that Chris will be riding the Tour as we know he has done nothing wrong.”

The UCI hasn’t been able to impose a suspension until the matter is resolved. It is frustrated by the scenario but there’s little it can legally do to prevent Froome from racing. “As per the World Antidoping Code, there is no time limit for disciplinary proceedings,” said a UCI spokesman earlier this year. “The case is currently in the hands of the experts, and as such the UCI don’t interfere with any comments or statements while the procedure is uncomplete.”

The president of the UCI, David Lappartient, has expressed concerns about the matter but also insists that due process should be followed but that the confusion around Froome’s AAF is damaging for cycling.

It’s now July and although Team Sky and Chris Froome continue to repeat their mantra – that they too would like resolution on the matter – the ASO has decided that it is time to impose a time limit. If he should be allowed to race then it’s up to the team and the rider himself to tell us why, only then can the race proceed without the risk of another asterisked result.