They began the final stage separated by a fraction of a second and ended the 15.7km time trial 39 seconds apart, Tao the champion and Jai the runner-up. A Giro finale for the ages yielded a coup for the Brit and heartache for the Australian. 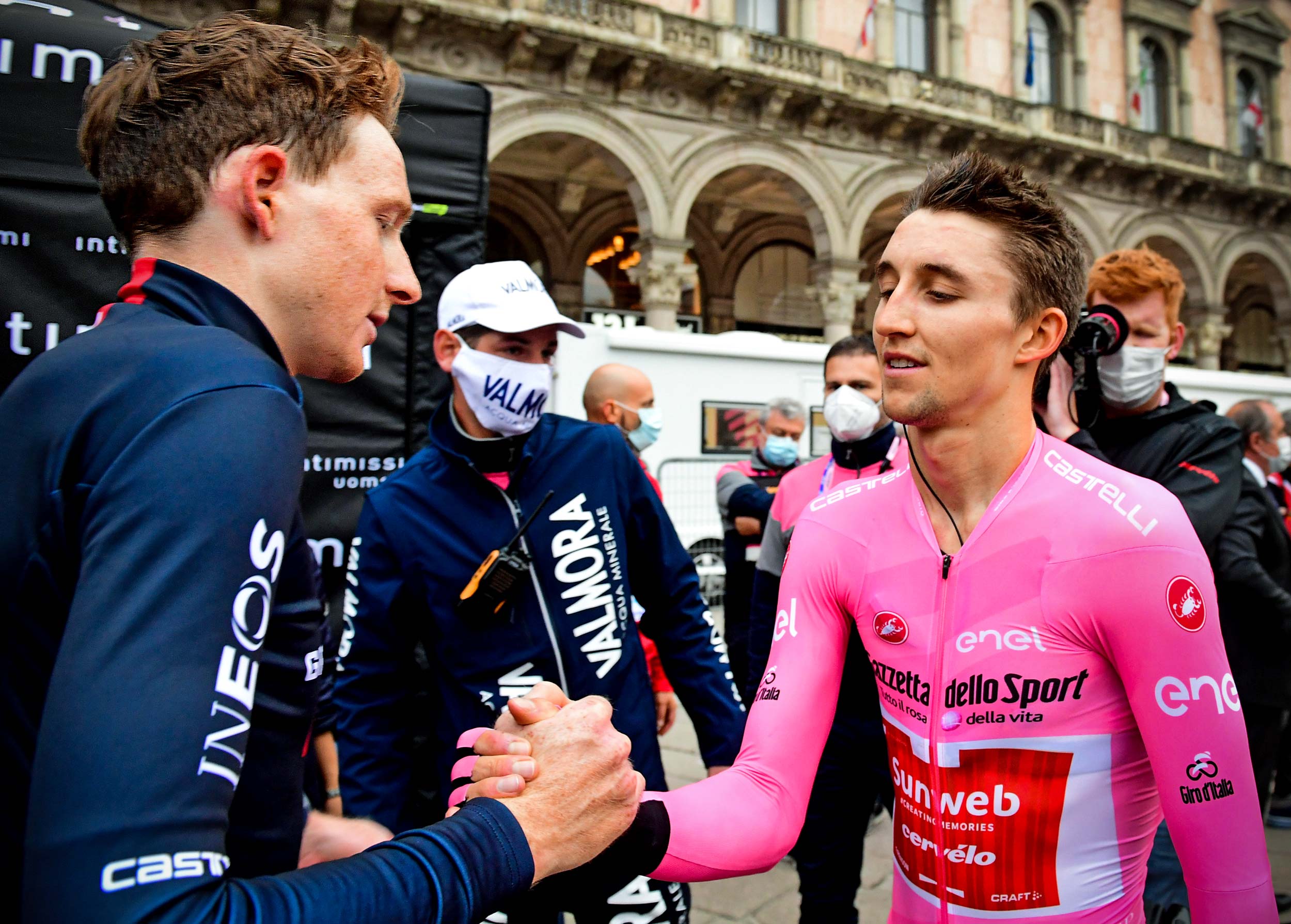 The champion and the runner-up… Tao Geoghegan Hart and Jai Hindley in Milan. The two 24-year-olds ensured that tension remained high through to the final minute of the 2020 Giro d’Italia. (Photos: La Presse, via RCS)

It’s necessary to be wary when offering a comment on what Tao Geoghegan Hart and Jai Hindley – and the many others in the peloton of the 2020 Giro d’Italia – did this October. Emotions can run high and it was a thrilling contest that lured many pundits in for a spectacular viewing experience that they may otherwise not have bothered with. And so, the immediate appraisal of the race should be the obvious sporting cliché: everyone was a winner.

The very fact that the Giro made it from Palermo to Milan this year is remarkable. The real reward of this 3,360.9km journey is that cycling ignited passions and reminded the fans of how exciting racing can be.

Never mind that the result shows that Geoghegan Hart beat Hindley by 39 seconds, with the Brit eking out his winning advantage on the final day while racing to 13th place in the final stage. The numbers tell only part of the story and to analyse a race like this by looking at times, and times alone, doesn’t do the Giro of 2020 justice. 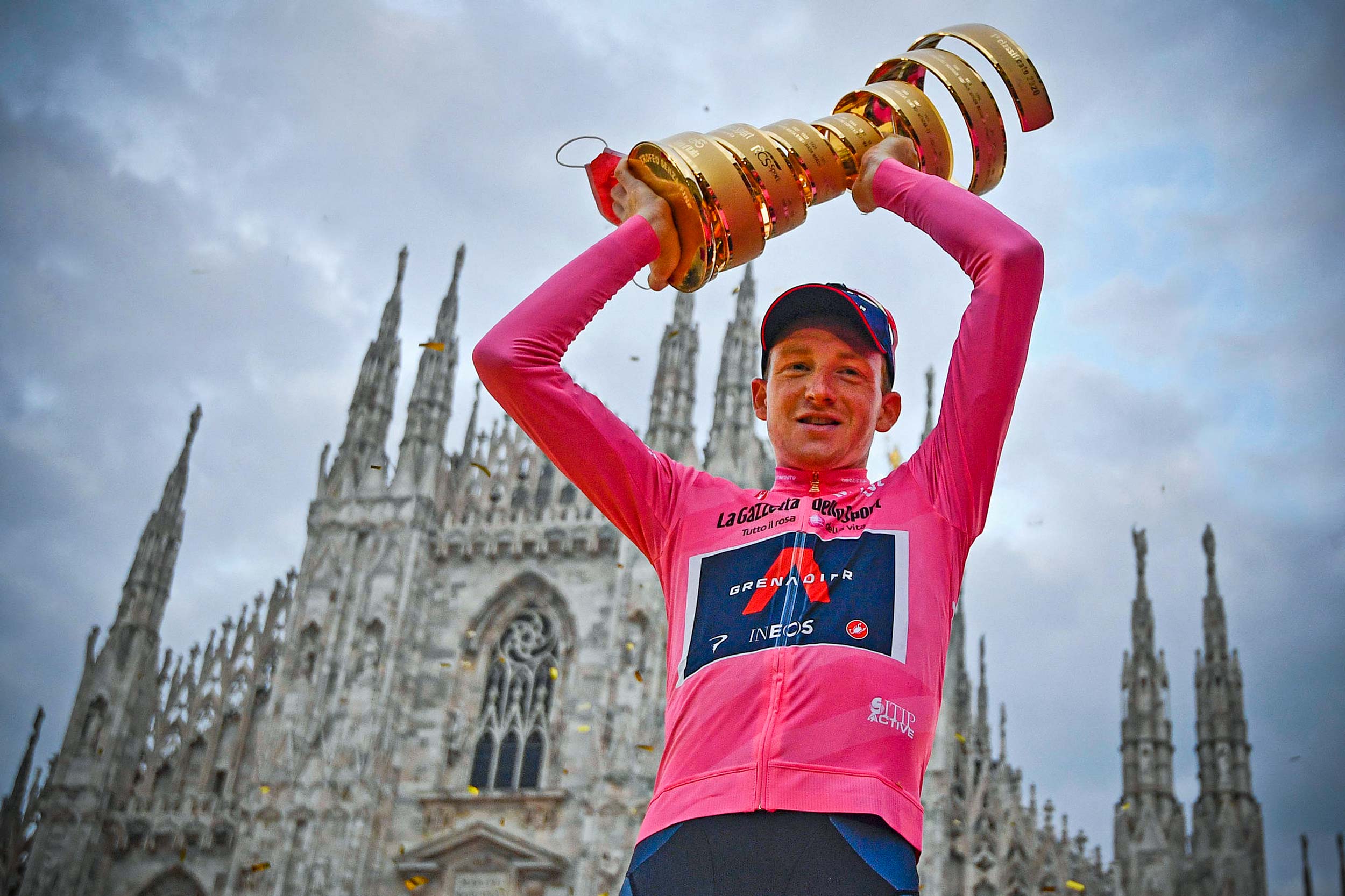 Geoghegan Hart never got to race in the maglia rosa, but he wore it at the end of a compelling contest.

We don’t need to be reminded of the pandemic either, it’s in our faces every day. We see it on the news and the images highlight the many challenges we face in our daily lives.

Face masks cover expressions and vacant roadsides might suggest that cycling is dying in 2020, but we know better. Thanks to the efforts of a large cast, the Giro d’Italia – just like the Tour de France and many other races that were contested in 2020 – has indeed put a smile on bike racing.

In a year when everything is extreme, and nothing is ‘normal’, we have been privileged to see an extraordinary sporting contest. Making it even more thrilling is the glorious element of the unknown. 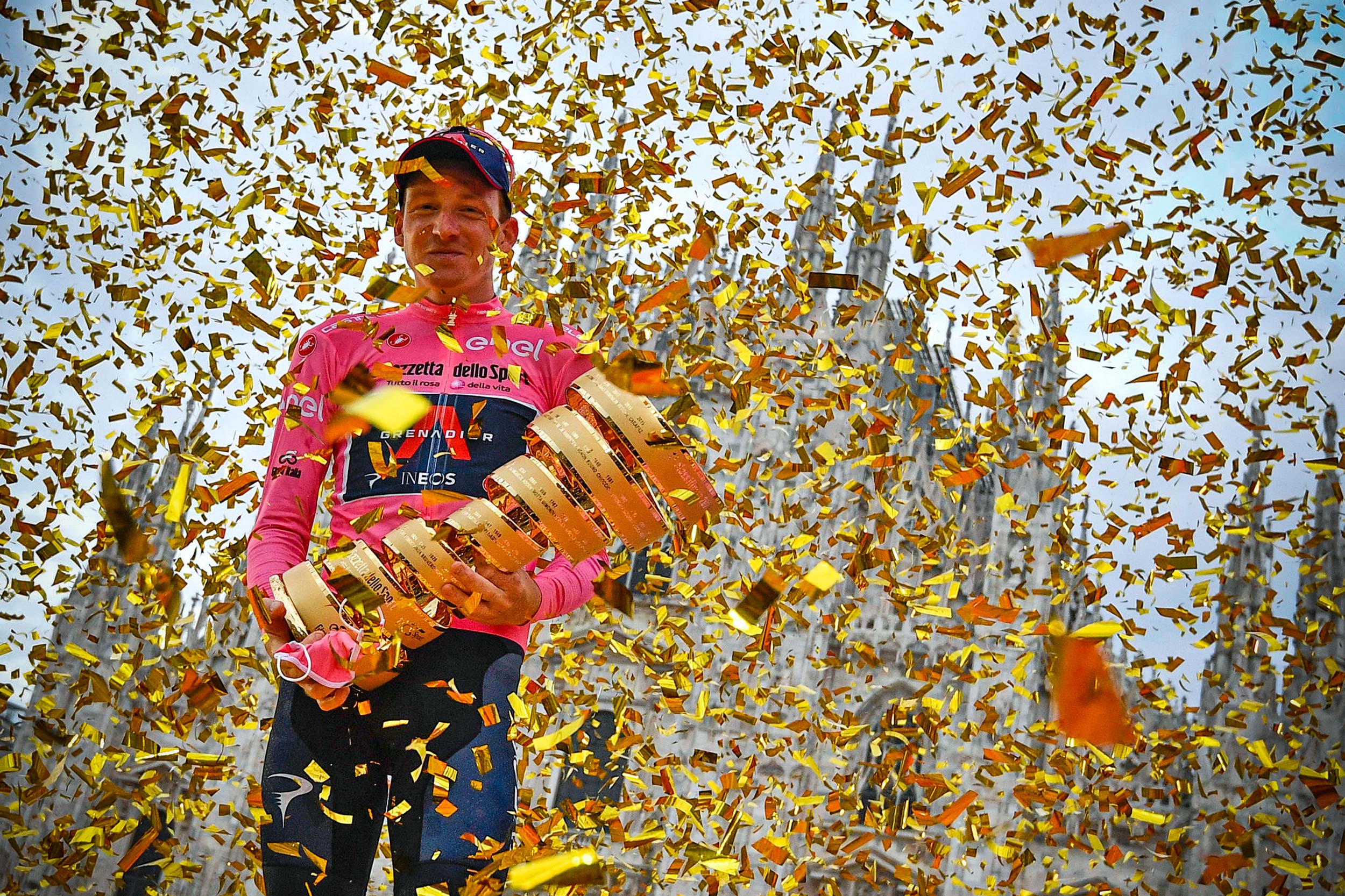 Initially included on the Ineos Grenadiers’ roster as a domestique, Geoghegan Hart finished the 103rd Giro as the champion.

Anyone who forecast the result of the Giro (or the Tour or, yes, the many other races that were contested) is a genius. If you did, please step forward and explain yourselves! To predict that Tao and Jai would start the final day locked together in the GC standings, with little more than a blink of the eye separating first from second, would be ridiculous.

Scroll further down the rankings and names such as Wilco, Joao, Pello and Fausto in the top order highlights the randomness of the Giro, indeed the unpredictability of pro cycling in 2020. 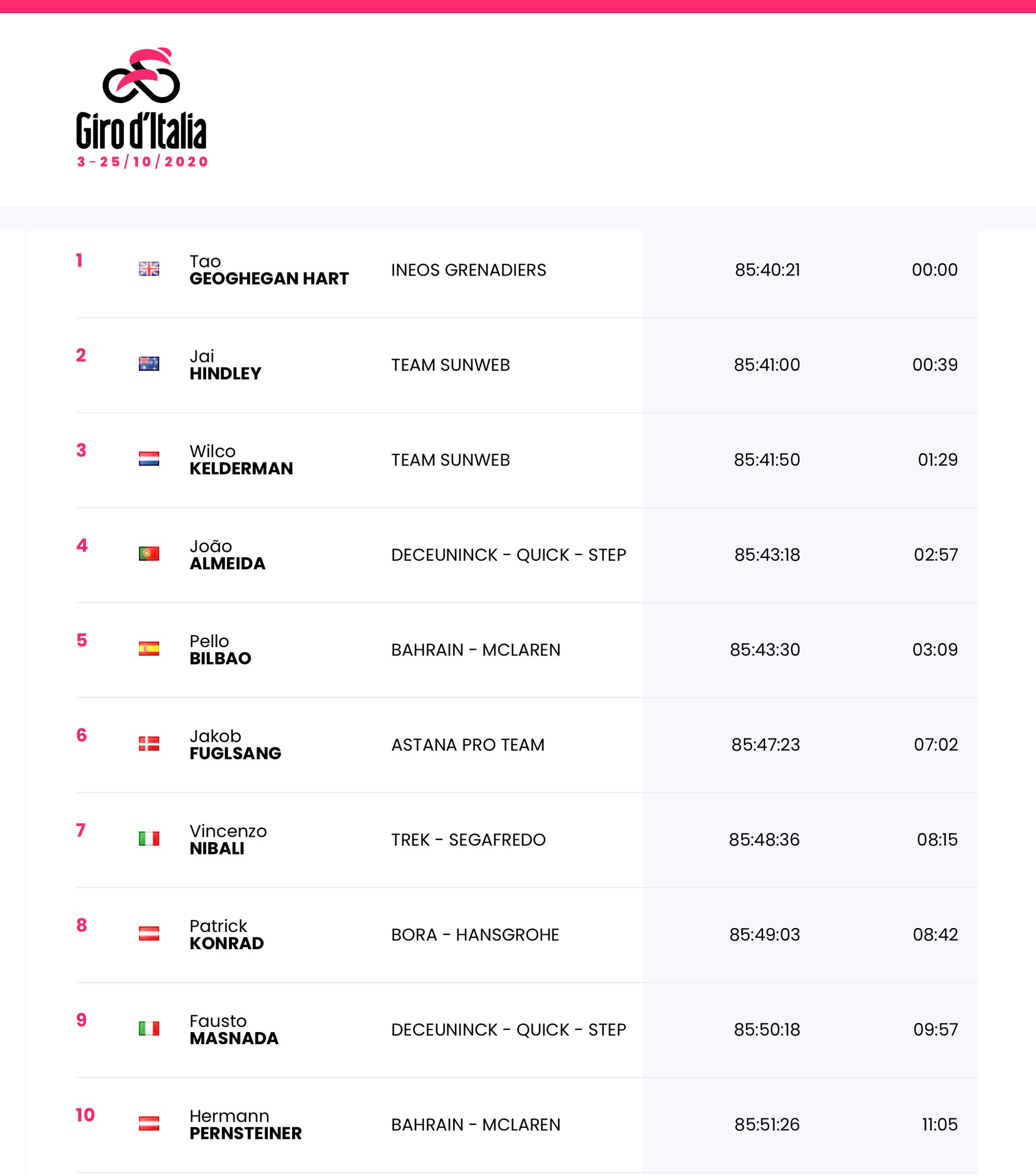 The final general classification rankings. (Click the image to see the full list of results from the Giro’s official site, www.giroditalia.it)

If you’ve followed pro cycling long enough, you’d know how common it is for the cream to rise to the top. Those who are new to the sport would, for example, often see the image of a breakaway with a massive advantage over the peloton and be certain that the escape would make it all the way to the finish to contest the win. But most of us know the reality; a quick scan of the names in the break or the teams represented, or the profile of the stage is all it takes to effectively rule out the chance of a random triumph.

In Grand Tour racing this is usually exaggerated. Remarkably, there is a long list of riders throughout the history of our sport who have excelled time and time again, despite the myriad opportunities that cycling offers to fail. Crashes, punctures, incidents with spectators, or issues within a team can spoil the script. And yet, somehow there has been a tradition of repetition for riders with outstanding qualities and therefore predictions often seem obvious.

That’s how it usually goes: the pedigree of a rider is established, their strengths noted, their team selection deliberate… and in the pre-race hyperbole they are referenced as favourites or challengers or some other moniker like ‘smokey’ or ‘outsider’. 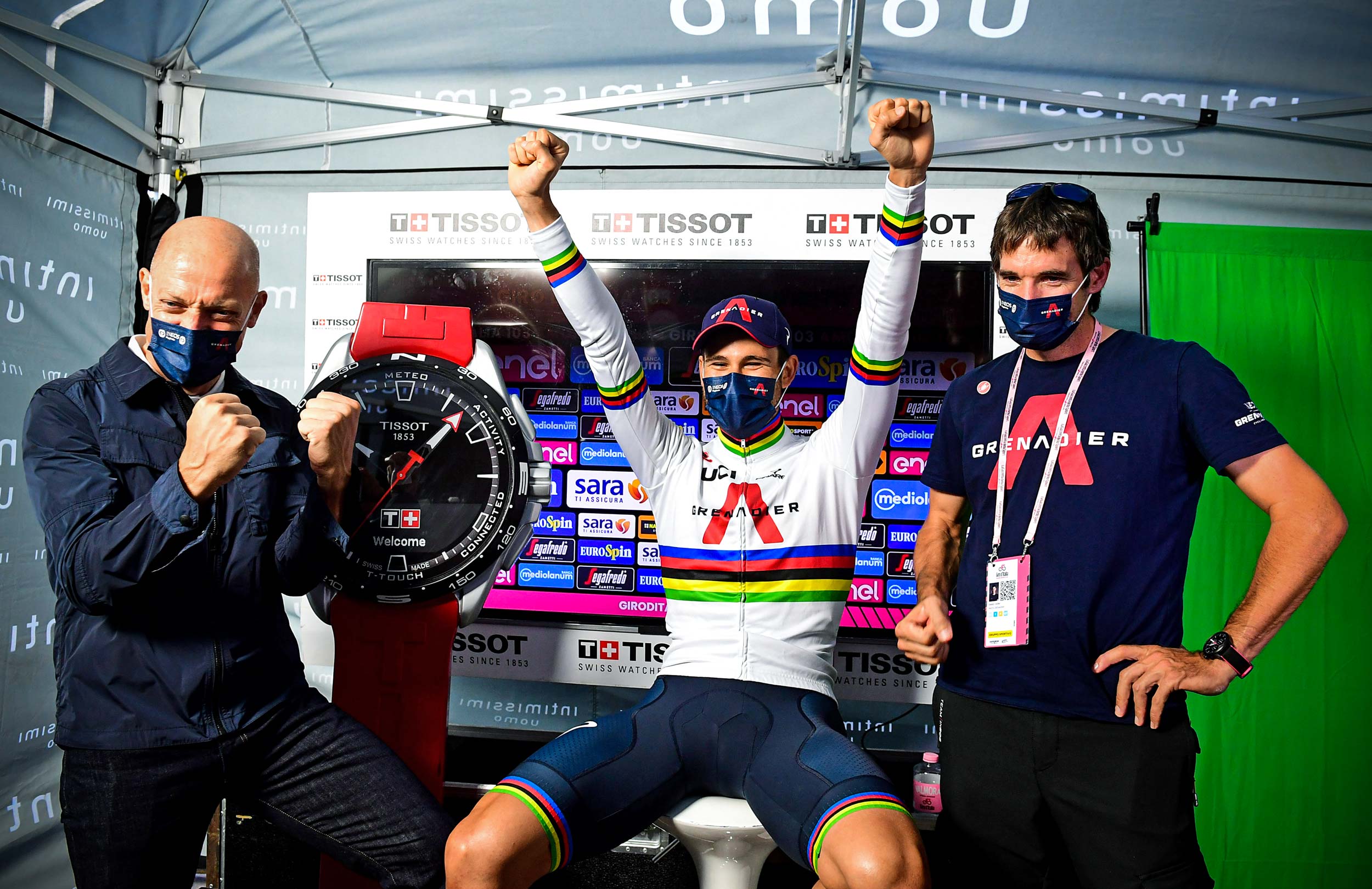 Filippo Ganna, the TT world champion, won all three time trials at the Giro, as well as stage 5 to Camigliatello Silano. His victory in the final stage was certainly worthy of celebration but the joy shown here reflects his response to the conquest of a team-mate. He celebrates the 13th place of Geoghegan Hart in Milan – ie. the moment the young British rider won the title of the 2020 Giro.

Before the Giro the obvious candidates were indeed spoken about and, even if it all seemed logical, we relished the prospect of what was to come… should the race make it all the way to Milan.

Geraint, they said, was surely a favourite for the title. And if not him, then Vincenzo or Steven or Simon or Jakob, perhaps. They are the GC specialists of their respective teams but in 2020 it didn’t matter.

‘G’ would crash out, his chances spoiled by a bidon in the neutral zone and a moment that lasted around 0.86 of a second. Splat, onto the ground he went… and not long afterwards his team was picking up the pieces of a campaign that had seemed obvious.

Instead of chasing GC victory, the Grenadiers declared, they’d look for opportunity. The leader was gone, long live the chances of the workers. And off they set, onwards to Milan with their heads held high and their tails not tucked between the legs.

The original plan was obliterated, but no point in moping. This is 2020, let’s make the best of the situation and do what we can. 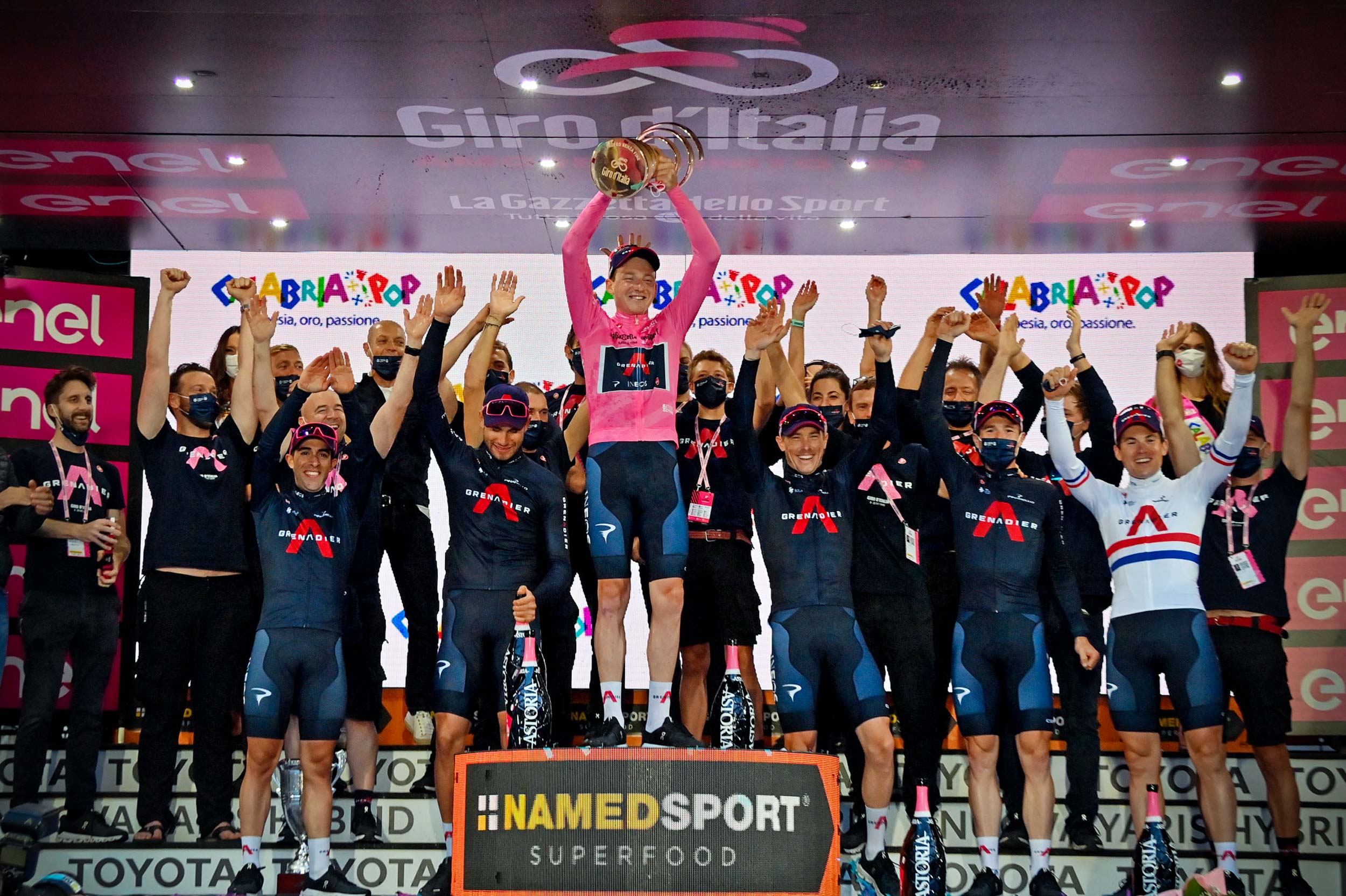 In the opening week, Tao was a domestique. Filippo was a candidate for three stages. Jhonatan may have class and capability but he was on the Grenadiers’ roster as cannon fodder. And Rohan was… well, the great unknown that he so often is.

That was then, this is now. G was gone but the others stepped up and put on a show. They made it to Milan and they entertained. Seven stage victories, the maglia rosa, the maglia blanca, the classifica a squadre… all theirs! And that’s before we even look at the other conquests, particularly – from a parochial Australian perspective – the stunning rise and rise and rise of Rohan Dennis who many credit with making Tao’s overall victory possible.

The result is one thing but when you add even more emotion to the mix, which is easily done with this outfit – one that will continue to mourn the dreadfully sad loss of Nico Portal forever more – then we realise that bike racing is more than just riding from one line to the next.

Always with us. This one’s for you, Nico 💗 pic.twitter.com/euapX7iTQy

The 103rd Giro d’Italia was a fantastic showcase of sport. It offered joy as well as heartache. The script was screwed up and tossed away back in March when the race was postponed from May and shunted to October and fingers were crossed. Would it even actually take place? Surely not, but there was a tiny reason to be optimistic.

Eventually – remarkably – it did begin. And the entourage set off on a course for Milan with mixed feelings and an entirely new aesthetic. 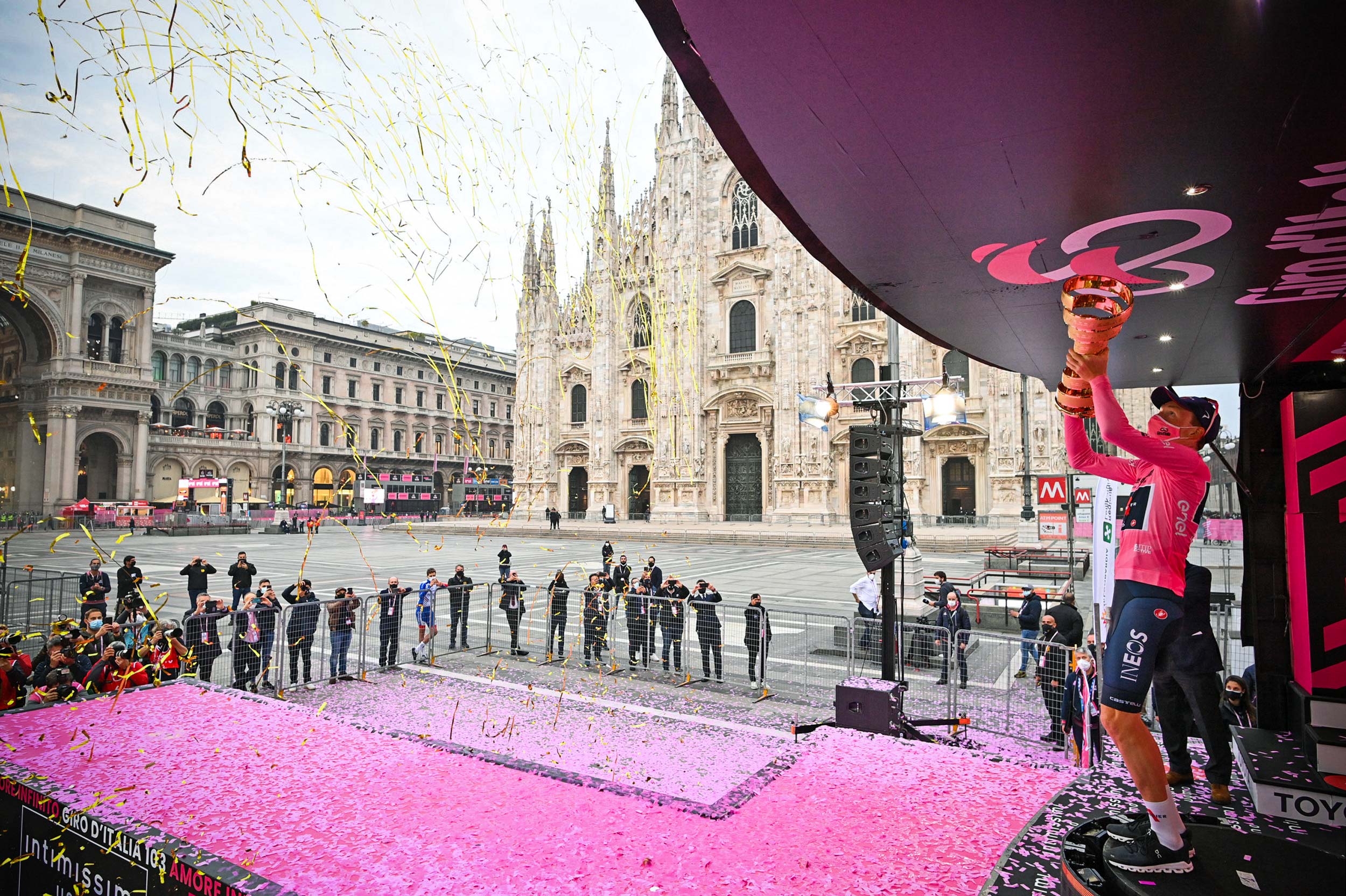 There were face masks and a lack of spectators, long shadows and autumn leaves. Then, in the final days, altered routes were forced upon organisers because of the pandemic, keeping the race inside the confines of Italy rather than the planned deviation to France before the showdown at Sestrière when an Australian helped contribute to the excitement.

It was bike racing but not as we’ve come to know it.

It was unpredictable and even awkward at times.

And yet it was fantastic fun to watch (even if, in many places around the world, you had to do so on your phone – and at a cost). 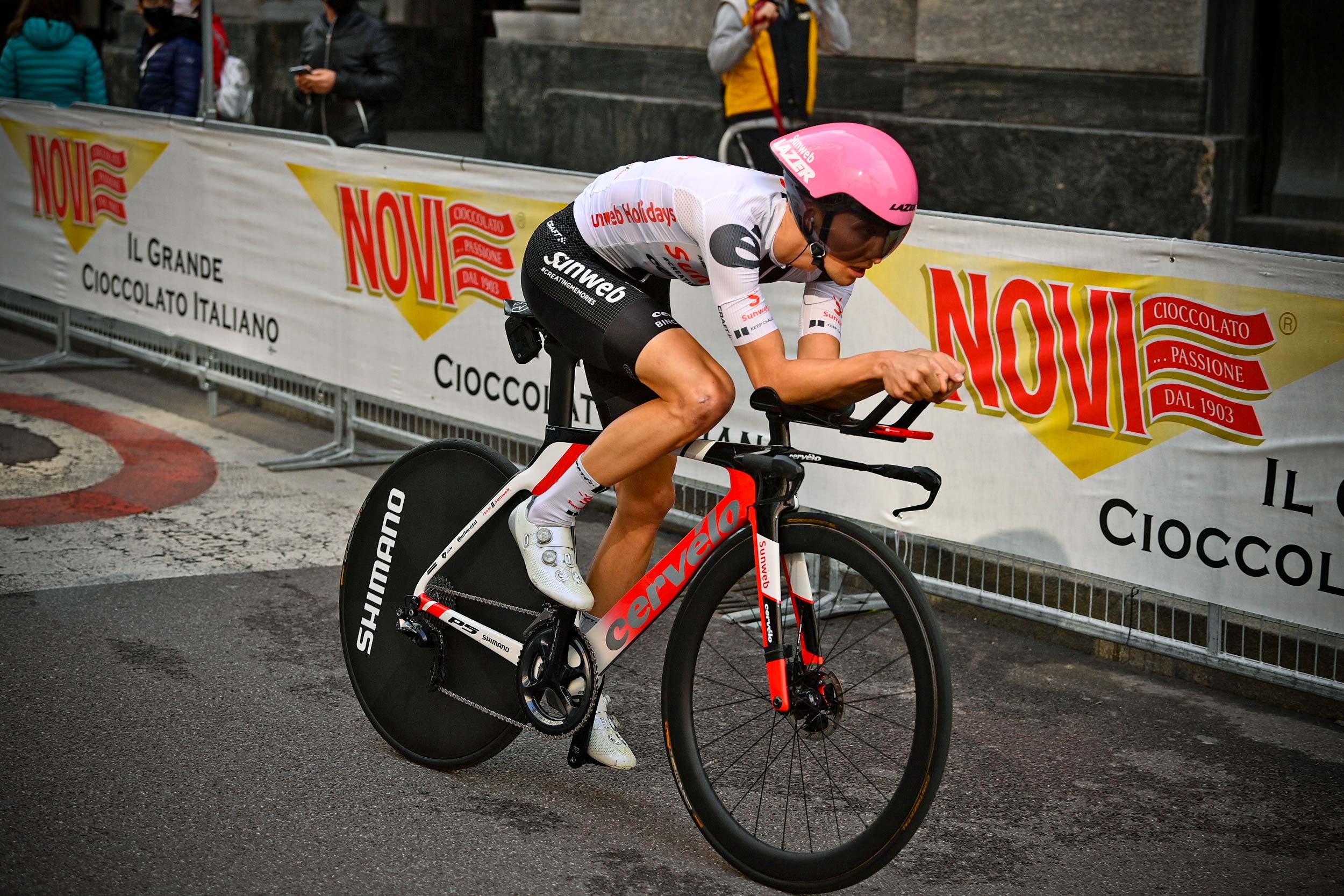 Jai Hindley is the 10th Australian to wear the leader’s jersey at the Giro d’Italia. He raced in pink for one day… but warmed up for that crucial time trial, as pictured, in his Sunweb team colours.

Of course, there was another element that made the Giro of 2020 so special, so enjoyable, so compelling: Jai Hindley.

Did you know this guy three weeks ago? If you’re reading RIDE Media, chances are you’ve answered ‘yes’. But for many it was an unfamiliar name. That’s not the case anymore. He didn’t just excel, he won a stage, he showed true grace, he led the race and he finished second overall!

His class on the bike is what makes Jai wonderful to watch. He can do remarkable things and, thankfully – curiously – duly downplay the very accomplishments that make him a superstar. He says he’s just an Aussie bloke who likes to ride his bike but there’s a lot more to it than that.

Of course, we now know what happened. He was beaten for the title on the final day but to me – and many others – he’s a true champion. 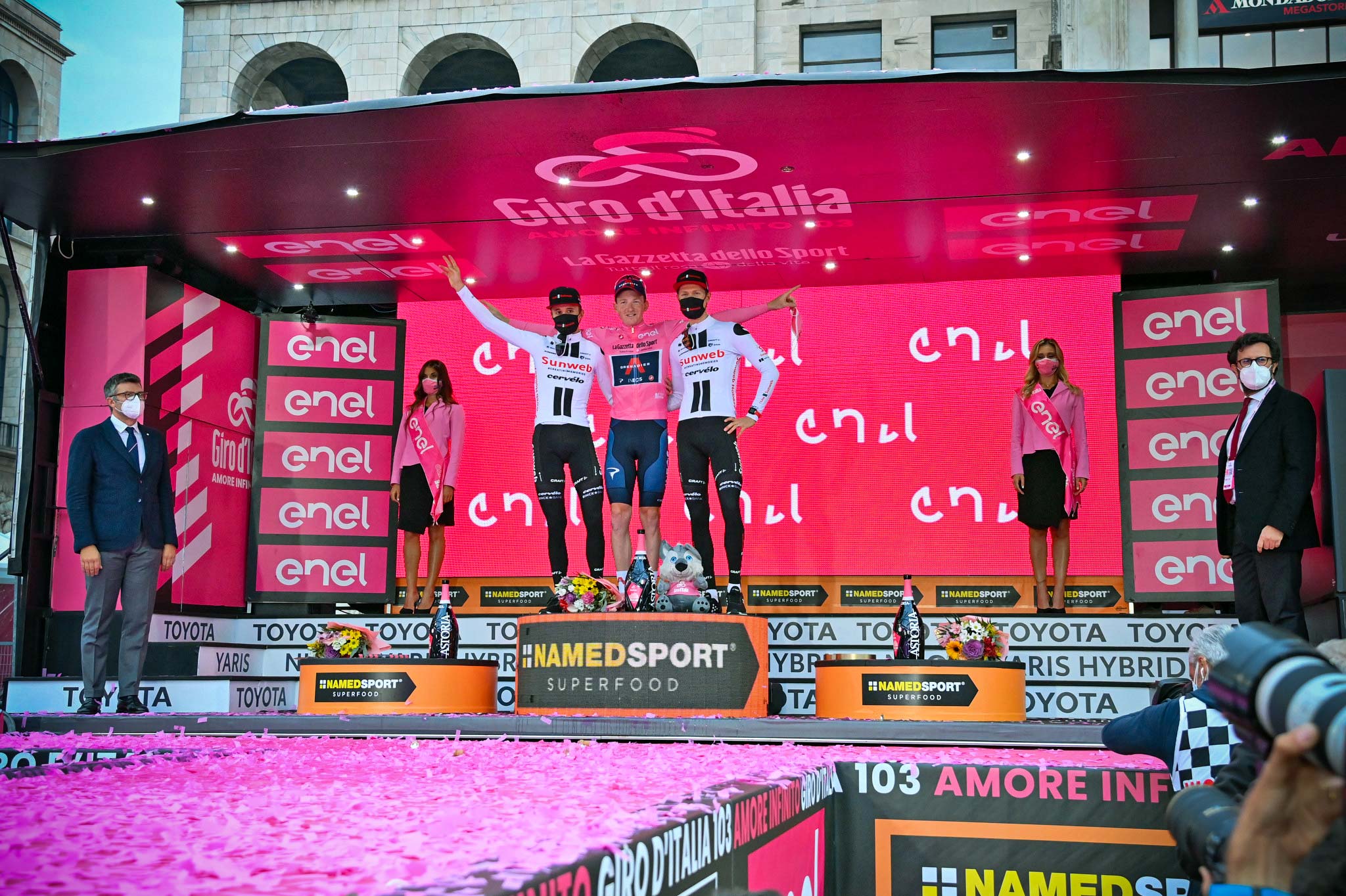 The 2020 Giro was a strange race, a compromised competition, a contest which wasn’t all that it could have been. There were victims of the virus and entire, dominant teams absent well before the finish. There is no way anyone could have predicted what would happen… and that perhaps is what makes it so fantastic.

Congratulations Tao. Bravo Jai. And thank you to everyone involved. We all need a little inspiration in a year like this and the Giro delivered.