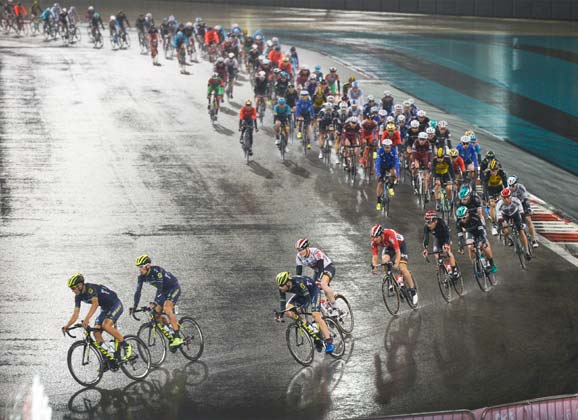 Hammer time: is it the future for cycling?

Overnight a series of releases were issued in a range of ways by a range of outlets. Let’s call them ‘cycling stakeholders’ – that’s a buzzword of the moment – and recognise that most of the commentary came from people involved with an exciting new initiative for the sport of cycling.

The ‘Hammer Series’ is here. It’ll begin in June. And the announcement included quotes and commentary from many associated with an entirely new concept for professional road racing.

Apparently the concept will deliver “a must-watch, must-attend racing experience for cycling enthusiasts and sports fans”.

Interesting. It sounds like we must know about it.

But let’s consider how it came to this first and then contemplate what the benefits of an interesting, considered, proactive rethink of the pro cycling model really are.

Anyone who has observed how pro cycling has plodded doggedly along in recent times will agree that it is absolutely time for a significant shake-up of how road racing is managed.

It has (miraculously) survived scandal after scandal and yet retains enormous appeal from a vocal and passionate audience quite simply because of one obvious thing: cycling is beautiful. There is history and landscape and emotion and endeavour – and a whole lot more. And it’s all on display when the sport is broadcast (or, dare we say it, presented in good old print).

Many people love cycling and that’s why we want to see it evolve, to hold its place in – or, indeed, be become part of – the modern sporting spectrum.

There have been a few small steps in recent times but the volley of releases from Shift Active Media, on behalf of Velon – the innovators of the new Hammer Series – in association with InFront, suggest that this is The Answer.

“The new race series guarantees comprehensive cycling action, which is appealing, modern and accessible for fans,” insists InFront’s executive director (summer sports), Stephan Herth. “This will ultimately lead to re-establish the strength of cycling and position it as an appealing product for media, sponsors and fans.”

Great! Let’s go. Tell us more. And they do. “The Hammer Series has been designed with excitement for fans and viewers as a paramount priority,” continues Herth.

“Its format makes the riding challenge comprehensive – to deliver a definitive verdict on which team is best – while ensuring that the action is fast, exciting, accessible and easy to follow for both die-hard road cycling fans, and sports enthusiasts who may be less familiar with road racing.

“The structure of each challenge and the Hammer Series’ points system ensures that it’s the team’s performance that is tested and rewarded, not the individuals’.”

Bingo. Engagement for the community, racing for the fans, a commodity for the teams… a future for a sport which has stumbled along largely following a traditional framework for events that have a long history. At the same time, bike racing by its very nature, can be diverse. And this is how it’s come to be that there are so many factions in the sport. There is also a series of ‘rules’ which seem to be difficult to govern. Furthermore, whenever the urge strikes, it is possible for those who manage the sport to create new formats without consultation. This is evident year on year, even if we just consider the ever-changing nature of the route of the Tour de France. Take it a step further and consider the other Grand Tours and we soon realise that there are prize classifications that come and go (often based on sponsorship packages). Beyond that there are so many subsectors of regulations that very few, even those with close ties with the pro cycling model, fully understand all the details of.

Before we get bogged down in analysis such as this, however, let’s get back to the bold statements issued in the Hammer Series release…

“Each race in the series will consist of three high-intensity racing days in a format that will test the teams to their limit using different types of riding, and is guaranteed to go down to the wire! Five riders from each team of seven are selected to tackle each day’s discipline with the ultimate goal to cross the finish line first after three gruelling days of racing. Each day will feature multiple laps of 8-10km ensuring wherever fans are on the course they will get the ultimate view of the action.”

This may well be the antidote to the complacency that has overwhelmed many administrators in cycling. It might just send a surge into the industry and wake it up and make it realise that something has to be done before the pro road racing model fades away.

Some will argue that the following of cycling is so strong that there’s no risk of that happening, but others recognise that the constant infighting between bureaucrats and businesses associated with the sport is not entertaining.

Evidently, the answer is yes – because it keeps happening.

And evidently, Velon – or Shift Active, or InFront Media, or the Hammer Series itself – is intent on declaring that change is here, and that “an exciting new multi-discipline team race format” has been launched. And it promises to bring “fans right to the heart of the drama”.

Good stuff. It’s positive rhetoric and that’s how any new idea needs to be fed to the public who will ultimately decide if it will succeed or not.

But let’s consider not only the concept but the possible ramifications and at least recognise that it serves a strong purpose: to reinvigorate a sport that needs reinvigorating.

While we do that, however, let’s also be wary of simply echoing sentiment offered by a new panel of administrators – as well funded and well intentioned as they may be – who have come along recently promising to change the sport… but, to date, have done so with a modicum of success.

Cycling is already divided into so many factions that it’s difficult to sustain itself. Beyond the obvious clashes – ie. road vs track vs MTB vs cyclocross vs BMX (all of which could, in fact work together to improve the great picture) – there are a multitude of political partnerships.

Every collaboration is done with purpose but many of them are so busy working for their slice of the cake that they dismiss the ideas of other collaborations or the input from others in the broader cycling community. And ultimately it turns into a quagmire of marginalised dissatisfaction and conquests which were only ever almost achieved.

It’s also worth noting that the new initiative has come courtesy of a PR company (Shift), representing a company that represents a consortium of teams (Velon), by way of a media group that has fingers in many pies (InFront), as well as an actual consortium of teams.

The media also had its say relatively quickly. Some were so fast to offer commentary.

“Innovative Hammer Series of racing unveiled by Velon, Infront and teams.” So sings the headline of a story by Shane Stokes on CyclingTips, before he goes on to quote much of the sentiment of the official release.

If we consider the commentary that comes from one incident involving disc brakes, or multiple rumours about motors in bikes, or anything that relates to doping… then the reaction to the release was virtually nil. Yes, it got a little bit of traction but considering the Hammer Series promises so much for the betterment of cycling, the response indicates that the concept is taking a while to be absorbed.

It’s much like the reaction to the original announcement about Velon.

We are here to change the cycling world…!

Okay. And then: Why are we waiting…? Etc.

It is progressing. But its happening slowly and it’s being steered by factions of factions. And there’s little regard for the broader cycling community.

It’s a “must-watch”, “must-attend” event. But do the fans want to be told what they must do?

We wait to see what comes next. The concept is launched. There is a name for the series that has strong backing. There are many requisite elements in place to ensure success. So we will soon see if it does indeed become an integral part of cycling’s future.

The Hammer Series may yet become cycling’s equivalent of 20/20 (or the Big Bash League, or whatever other equivalent exists in the many other sports that are in need of revitalising) or it might not.

One thing is certain, it’s going to be interesting to see what we must do next.