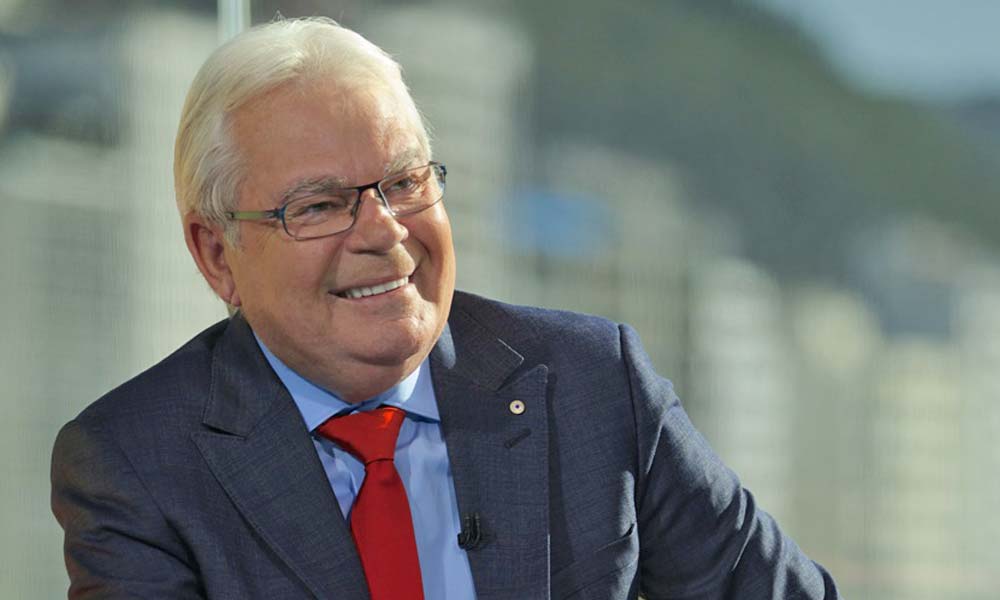 August 2, 2017
We consider the contribution to cycling coverage in Australia of the late great Les Murray… ‘Mr Football’ was pivotal in getting events like the Tour de France broadcast on TV in Australia.

On Monday 31 July one of the stalwarts of sports broadcasting in Australia, Les Murray, passed away after a long illness. He will always be remembered as ‘Mr Football’ but his contribution to cycling was also significant.

Without the support of Murray, it’s possible that the Tour de France wouldn’t have reached the lofty status that it currently enjoys on Australian television.

At the end of the 1980s and through the 1990s, Murray lobbied producers to ensure that cycling was part of the SBS broadcast catalogue. He hosted programs about bike racing and was one of the first Australian commentators to share the stage with Phil Liggett.

RIDE spoke with renown Australian cycling promoter Phill Bates to retrace some of the contributions Les Murray made for ‘our’ sport.

RIDE: I’m talking with Phill Bates who is a long-time cycling promoter and he had a lot to do with Les Murray in the formative years of SBS’s coverage of cycling. We had some terribly sad news the other day and I thought I’d get [Phill] on the phone and get a few comments about his contribution to cycling… a lot of people know him as ‘Mr Football’ but without his influence, I dare say cycling in Australia – and the coverage of it – would be entirely different. What do you think?

Phill Bates: “Oh certainly. Les was very strong on the sport [of cycling]. It most probably started pretty early with SBS’s coverage, mainly through John Rowley.

“I know Rowley employed Les initially with soccer – and also John Warren – but after that, Les became very much an aficionado, a very big supporter of the Commonwealth Bank Cycle Classic [who] actually hosted each half-hour program that went to air at six o’clock each night along with Phil Liggett…”

He also was one of the stalwarts of getting coverage of the Tour de France on SBS. Do you remember those early years…?

“Yeah, I certainly do… Adrian Swift was the person who did a lot in organising that [coverage] but you still needed people like Les Murray to be supportive of having the Tour de France.

“From recollection, I dare say it was about 1993 that we ended up getting the great coverage [of the Tour] on SBS. Time goes quickly when you don’t keep recording everything…

“Les was certainly a person who did a fair bit in organising the coverage of the Tour de France back to Australia on SBS.”

He’d go on to become Head of Sport for a number of years at SBS but prior to that he was someone who really had to lobby the producers to make sure that coverage of events like your race (the Commonwealth Bank Cycle Classic) and the Tour even got to air. I wonder if you can recall any anecdotes about how difficult it was to convince people in the halcyon time of rugby league that cycling was indeed a sport worth covering on television…

“Well, I think the great thing about SBS – and forget about all the other networks – is that SBS, being a multi-cultural [broadcaster] started taking the Tour of Italy. It couldn’t get the Tour de France in the early days.

“Getting cycling up and happening in those early years was pretty important. And quite a few people contributed to that. I also take my hat off a little bit to [former cycling magazine publisher] David Priestley who was involved in supporting SBS coverage.

“But SBS started supporting the Bank Classic for the first year in 1982 and it remained there for those 19 year [of the event] to grow to the stage where they were doing not only 30 minute [coverage] a night at six o’clock – and Les Murray was [pivotal] in contributing towards that occurring – it was absolutely fantastic.

“It was prime time television with cycling and I was forever grateful for Les for that.”

What about his knowledge? We understood him to know every single football player but what about his recall of cycling names? Do you think he was much chop at that?

“Yeah. He was a professional sitting in front of the camera.

“He enjoyed the sport.

“He had good people to learn off because I was the first one to bring Phil Liggett out to Australia, in 1988, and from that point of view Les felt very comfortable when he was sitting beside someone like Phil Liggett – and that helped him greatly.

“But I think he was a great learner and he learnt a lot about the sport.

“He obviously knew a lot about soccer and also surrounded himself with great people like Johnny Warren and other people who have come through.

“It’s a bit of a sad loss, to loose someone of his ability.

“I can only say that the sport of cycling has been a lot better off because of the likes of Les Murray.”