Lotto Soudal: disc brakes for all bikes in 2020

The topic of disc brake use in the pro peloton provided plenty of reasons for debate not too long ago. In 2020, however, they are everywhere.

At the Belgian Lotto-Soudal team, the aim is to exclusively use disc brakes this year.

RIDE Media begins its coverage from the 2020 Santos Tour Down Under by interviewing the team’s mechanic, Steven van Olmen to get an understanding of the differences between discs and bikes with the ‘traditional’ rim braking system.

One of only three teams in the WorldTour using Campagnolo, Lotto-Soudal will use 160mm rotors on the front wheel and 140mm rotors at the rear.

— Read the full transcript of our interview with van Olmen below. — 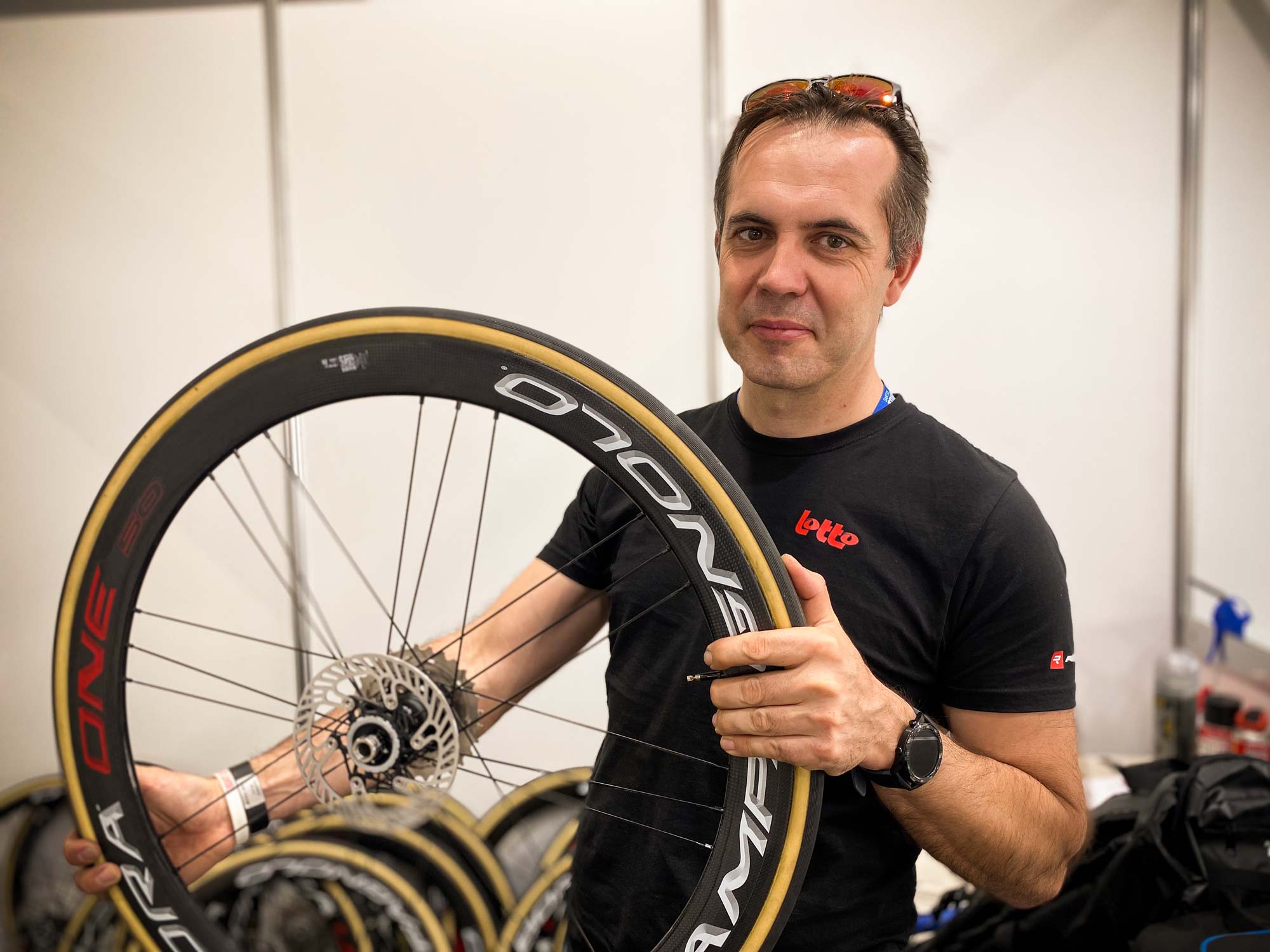 RIDE Media: I’m speaking with Steven van Olmen who is a stalwart of the peloton because he’s been a mechanic with Lotto Soudal for…

RIDE Media: Sixteen years! And this is his first year in which he is [apparently] not going to work on a traditional rim brake bike. So, I thought we would talk about disc brakes, the arrival of the Campagnolo system, and the things that you’ve done in the off-season to perfect the system.

Steven van Olmen: “Last year [the team] was already riding with disc brakes but it was maybe 30 percent of the riders… still, they were very satisfied with the Campagnolo product.

“At the moment, the disadvantage is the weight of the bike.

“It’s a bit heavier than a normal calliper bike, but the advantage is that it’s more aero, there’s more stiffness in the wheels, and the brake performance in the wet weather is also great.” 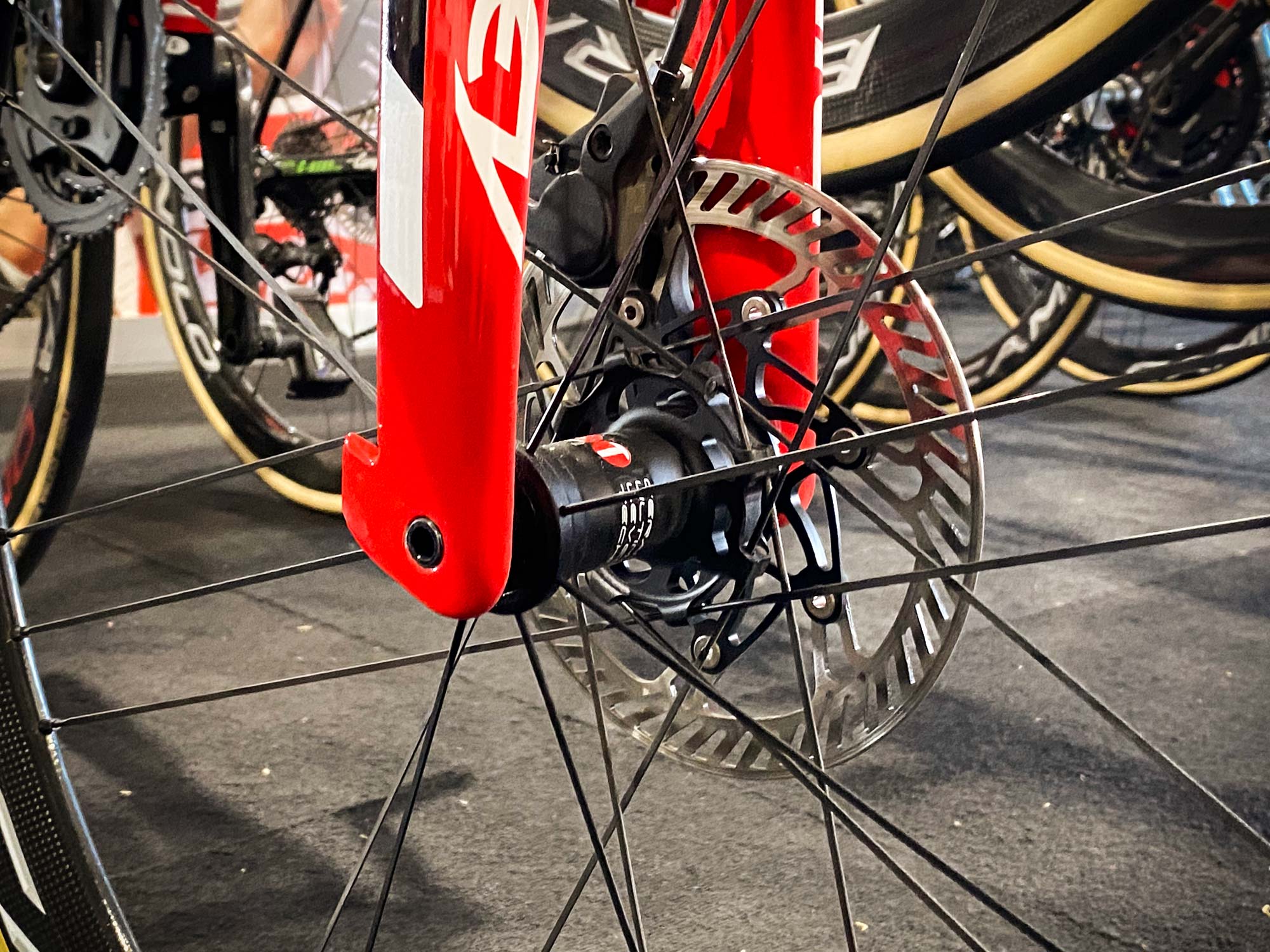 RIDE Media: Disc brakes aren’t new to the road scene but I guess that, over the last few years, you would have learned a lot more about them. I’m having look around after standing in your booth for one minute, and I notice there are some quite small rotors and some larger ones…

“For the professional riders, the speed is very high and for a rider who is over 75kg, it’s better to have 160 at the front.

“It’s possible to have 140 at the front but then the rider has to be lighter, but we cannot mix the wheels depending on which rider is using which bike because otherwise we made the logistics of spare wheels too difficult.” 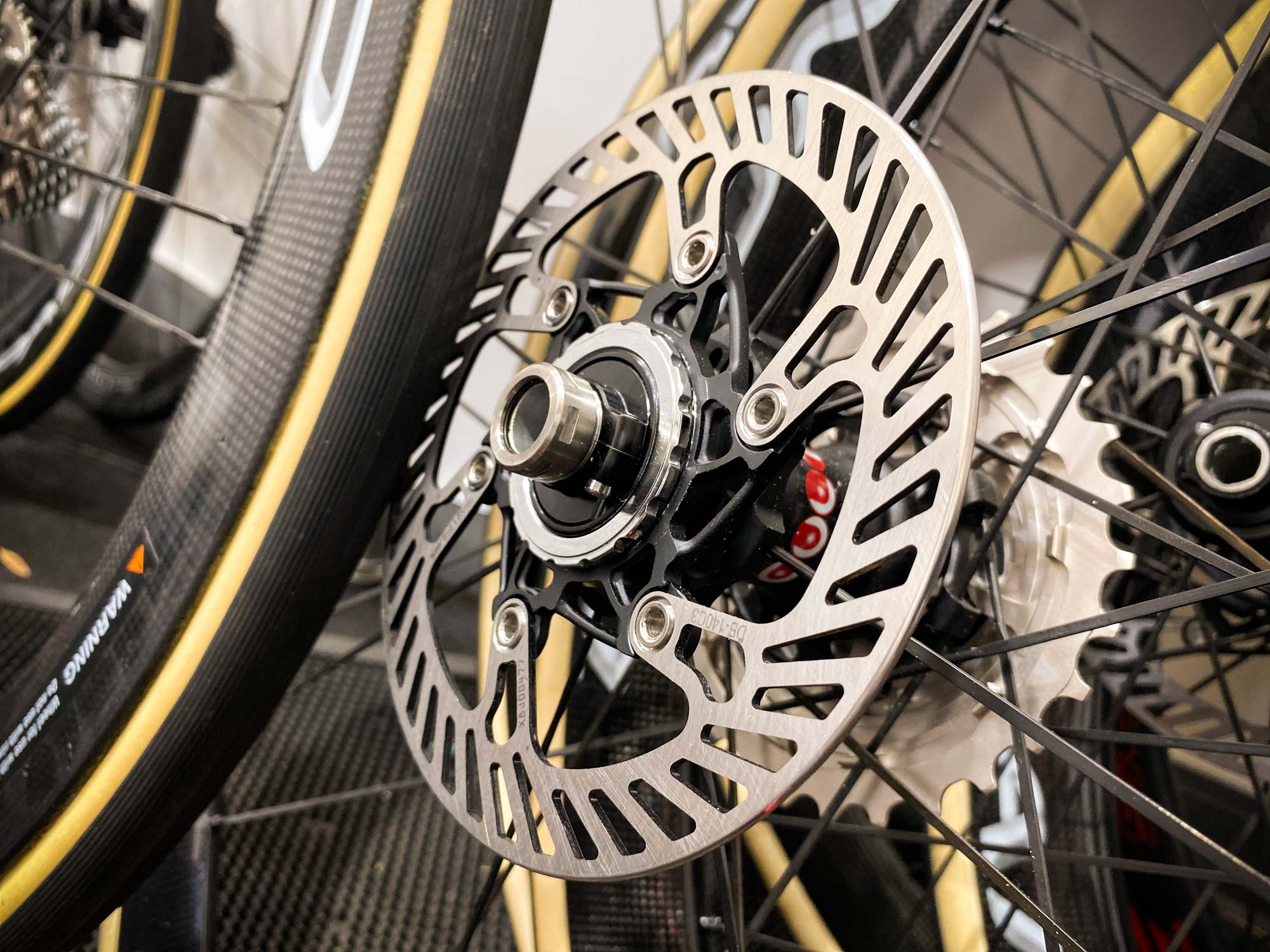 Campagnolo rotors have a rivet system which, the company claims, helps negate any significant influence caused by heat after long periods of braking.

“Ridley did some great work with the bikes when they introduced the disc brake range. They started with the Noah and André Greipel – who was still in the team back then – was the first who raced with a disc brake bike and he was very satisfied with the performance.

“Then I built a Helium with the same things as the Noah and I’ve found the process of putting the bike together to be easy.”

RIDE Media: Can you talk to me about the wheel changes? I know that Deceuninck-Quickstep, for example, has been using a power drill to effect a quick wheel change. What system have you got? And can you tell me the time difference for a wheel change compared with what we knew as ‘traditional’ wheels?

Steven van Olmen: “The thing is… I was in the car during the races but I’ve not yet had a puncture during competition, so I don’t know yet what time it will take to change a wheel.

“I also have a power drill, fitted with a hex key, but I have only ever used it in the workshop – not in race conditions, not yet.” 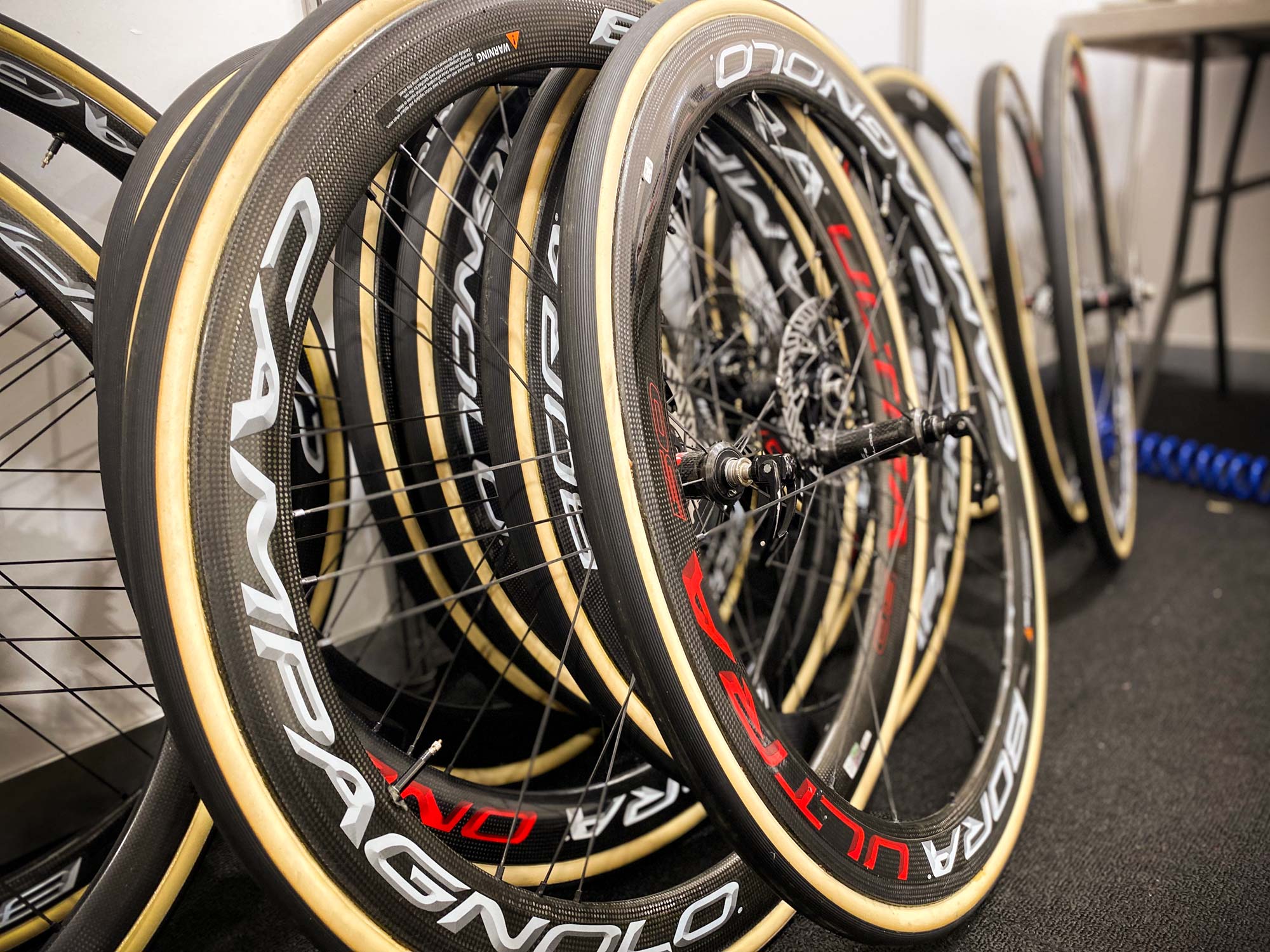 Despite a trend for wider tyres, most of the Vittoria rubber on Lotto-Soudal bikes are 23-25mm.

RIDE Media: But the arrangement is a thru-axle without a quick-release option…

“I’ll have to do my practice for wheel changes but something else to consider is experience. Obviously, when you do it more often, you will be more confident.

“I think we’ll maybe lose around five seconds, maybe 10 seconds. I think it’s not that much.”

RIDE Media: With the rear wheel, it’s a bit of a trick because you have to aim both the chain as well as the rotor.

Steven van Olmen: “Focus on the chain first and then the rotor. It takes only a little practice and it’s not too difficult. Sometimes it’s fast, sometimes it goes slow. It depends on the circumstance.

“With normal quick-release wheels, I also had fast and slow changes.

“If you stay calm and don’t stress about it, then it can be quick. But if you panic then you may make it more difficult and it may take longer to change wheels.

“Another factor to consider is if the rotor is bent or not because when you’re travelling all the time, like we do as a team, then there’s always a risk of damage in transit. It is important for me to check all wheels before race day.” 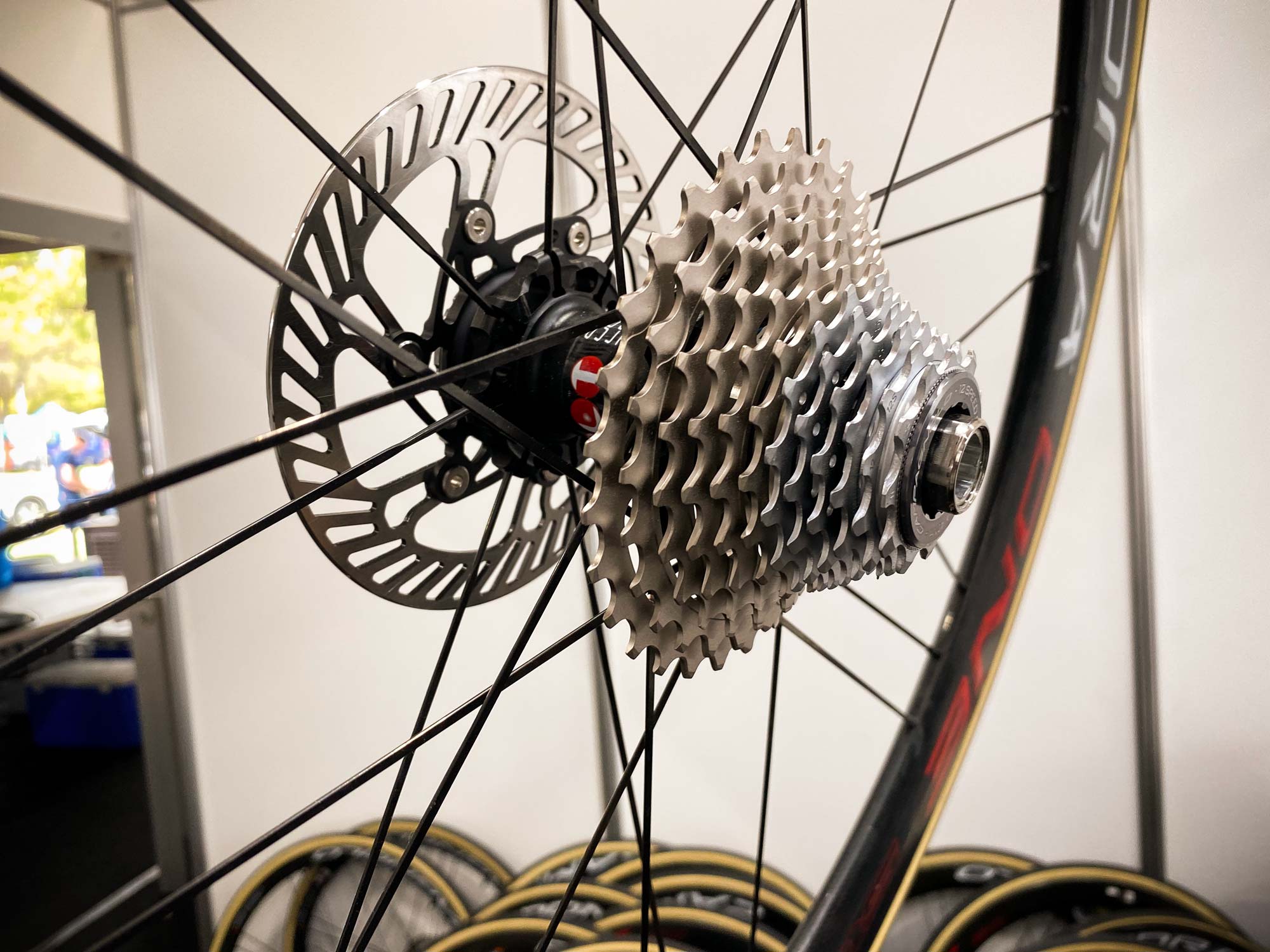 RIDE Media: In the off-season, it’s a busy time for mechanics because you need to build all the new bikes. Can you tell the number of wheels you got delivered from Campagnolo in advance of this change to this exclusively disc brake arrangement in 2020?

Steven van Olmen: “We already had disc brake wheels last year, so there’s some carry over. But so far this year we have 60 pairs of new wheels to prepare and there are still 30 pairs yet to be delivered. So, at the moment, we have 200 pairs of wheels.

“There are plenty of new ones but to build process starts in December, flows through to January. Then, after the Classics, we’ll get more still.

“It’s not like we have to prepare them all at once.” 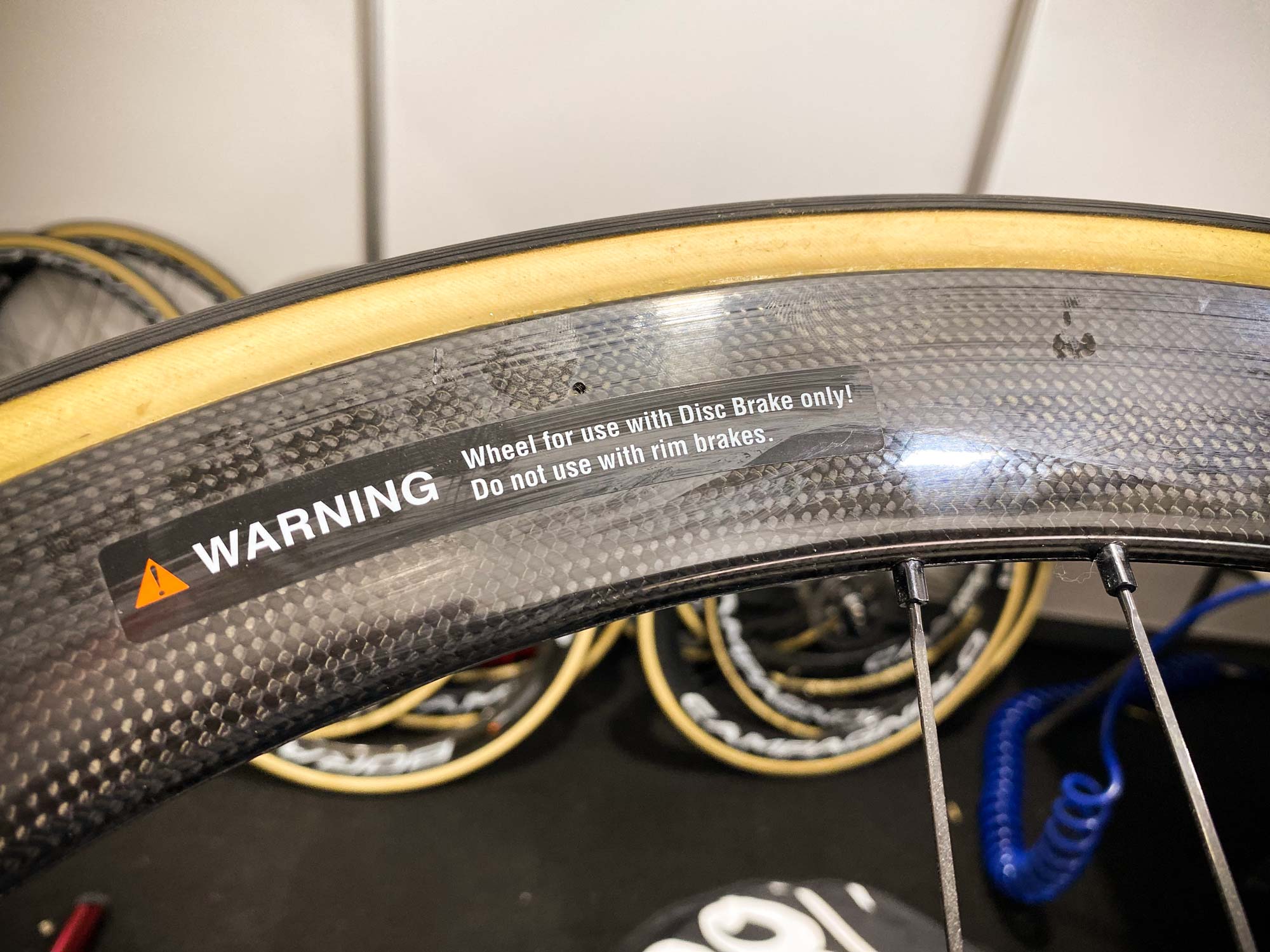 RIDE Media: Your team is one of only three in the WorldTour with Campagnolo, with Movistar changing to SRAM in 2020.

Steven van Olmen: “Yes, there will be Lotto Soudal, Cofidis and UAE Team Emirates – but they are still using the usual rim brake.”

RIDE Media: You’ve worked with the EPS [electronic shifting system] and with Campagnolo for many years. Is there any innovation from the off-season that may not yet be known about?

“Initially, we had the interface under the stem but now it’s hidden and the cockpit looks much cleaner now. It’s more aero.

“I think the bike is faster than it was before; it looks faster.” 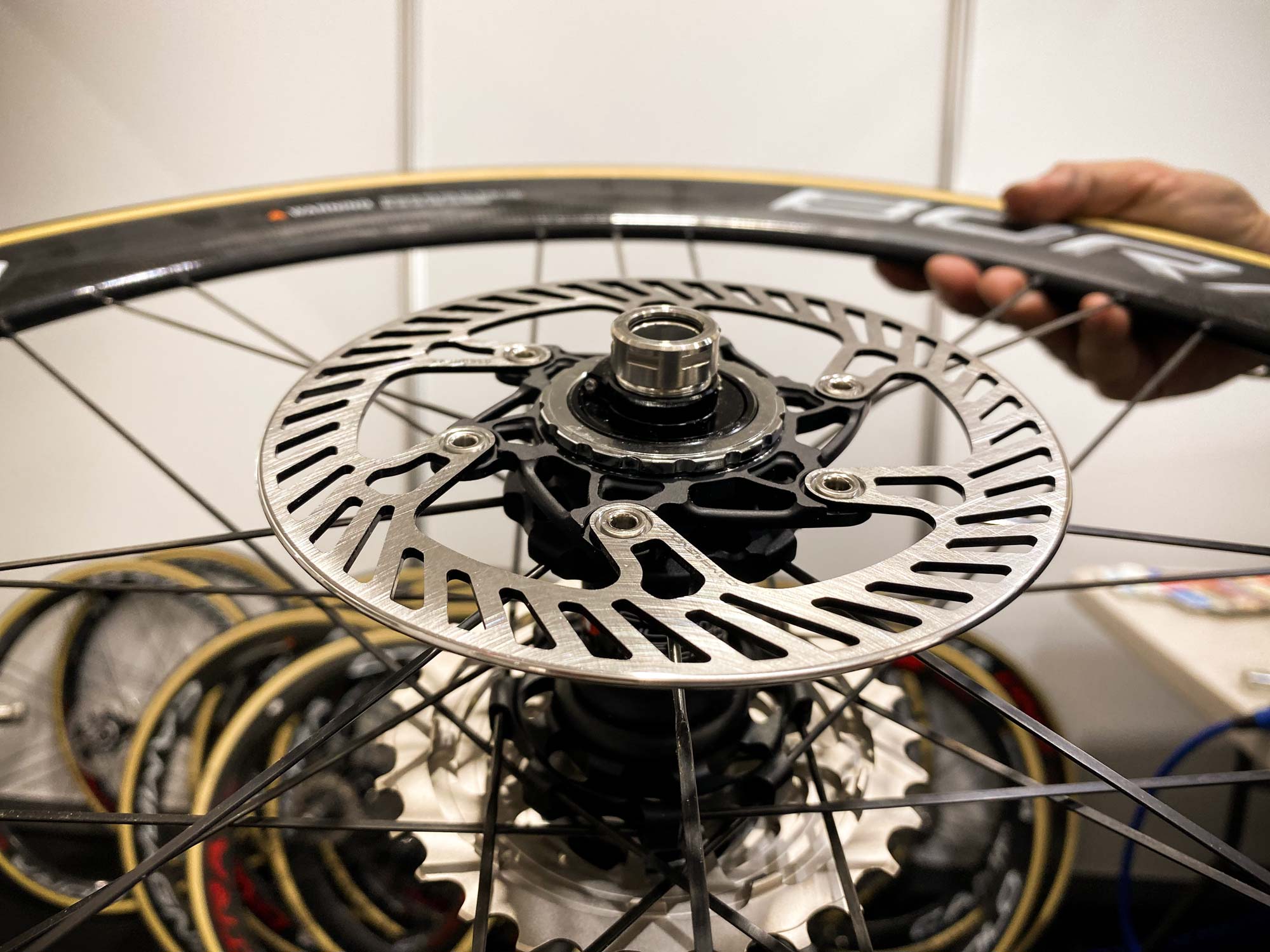 RIDE Media: Can you talk a little about the specifics of Caleb Ewan’s bike? Is there anything unique about it because it’s so small?

Steven van Olmen: “He started to use a disc brake bike in December, so he has to find out in the race if he likes it or not. I don’t know why they also have the rim brake bike in the fleet for him – it’s last year’s Tour de France bike that is also here just in case.

“Normally, he will start racing with a disc brake but he wants to see how the feeling is and then he’ll decide.

“I’ve worked with him for a year and I know he wants to have the lightest bike possible, and the rim [brake] bike is 500 grams lighter. So, maybe for the difficult stages, he will use the old bike but we’ll find out in the coming days.”

RIDE Media: Can you give me a rough average of the weight of the bikes. Obviously there’s a big discrepancy between the bike of Roger Kluge [192cm] and Caleb [165cm], for example… but what are most bikes tipping the scales at?

“Last year, the Noah was 7.6kg with the disc brake and with the rim brake it was 7.2kg, so around 400g difference.

“Every rider is counting all the grams on their bikes so it does make a difference.