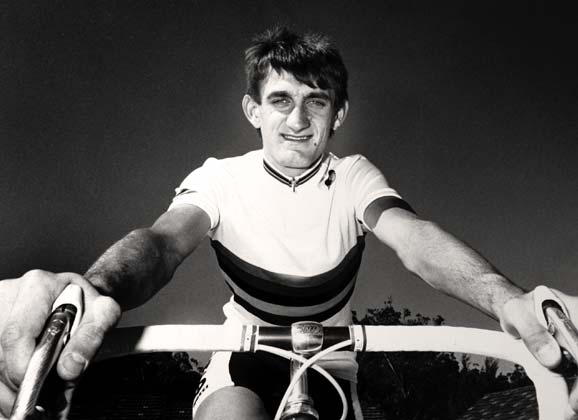 Memories of Halupczok: a thoroughbred champion

In RIDE #66 there is a feature on the 1989 amateur world champion Joachim Halupczok of Poland written by Herbie Sykes. It traces the path of the prodigious talent from the amateur ranks and onward to a racing career as part of the first generation of riders from eastern bloc nations who joined the professional peloton. Fifty days after winning his rainbow jersey in Chambéry, Halupczok was competing in Australia’s Commonwealth Bank Cycle Classic. As a follow-up to the feature in the magazine, we have spoken to a number of riders who were part of the 1989 ‘Cycle Classic’ and others who knew the Polish star who died in February 1994 of heart failure at the age of 25.

(If you ever saw Halupczok race or have any memories of his exploits on the bike, please share them with us.) 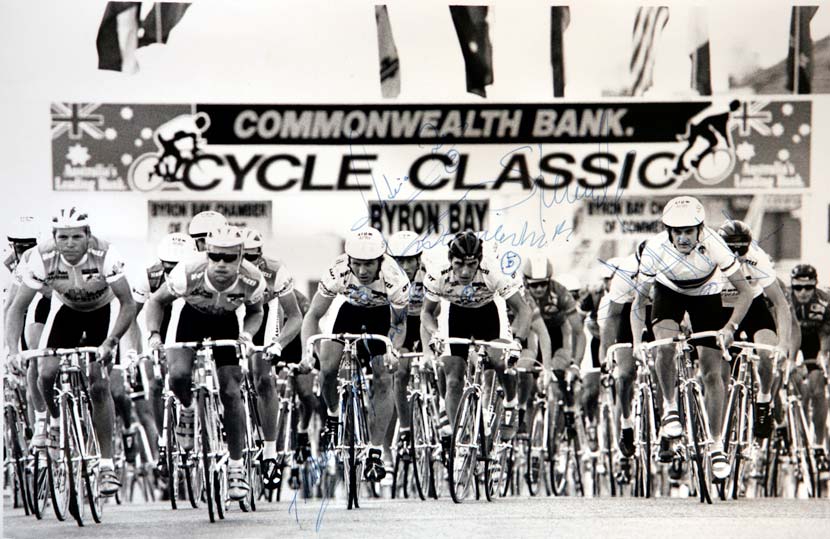 The start of stage two of the 1989 Commonwealth Bank Cycle Classic. Eventual race champion, Matthew Bazzano (at left) and his Hampshire team-mate Clayton Stevenson were part of the Aussie contingent. Joachim Halupczok (at right) was the first reigning world champion to contest the event.
Photo: John Veage

“I met Joachim Halupczok at the Skopenko Memorial stage race in the 1980s. It was one of those races conceived by the propaganda chiefs as an ideological parade, symbolising an everlasting friendship between Poles and Ukrainians. Only Polish and Ukrainian teams were allowed in.

“The race would start in Ukraine and finish in Poland one year and then go in reverse the next. Because of the lax customs control when the peloton crossed the border, we smuggled hundreds of Soviet made tubulars and gold into Poland to sell and convert them into US dollars or goods unavailable in the USSR, and the Poles did the same with jeans, sneakers and other clothing, sold their merchandise in Ukraine, dumped their roubles into gold and smuggled it back to Poland to sell. It was all business under socialism.

“That year, the Polish part of the peloton had some strong riders. I think they even fielded their national team in red on white jerseys. Zenon Jaskula was one of them but it was another guy who stood out for me – Joachim Halupczok. He was such a headache, never sat still, never missed a chance to attack. We sent a team-mate to look after him but Halupczok kept losing him, so we sent another one and I thought how ridiculous it was to ‘waste’ two guys on this loose canon.

“He was one of a kind, no doubt about it. A typical Polish ace: smart, canning, aggressive, relentless, hungry to win. When I heard he won the worlds, I wasn’t surprised. The greatness was written all over him.

“A life cut way too short.”

“Joachim Halupczok wore the rainbow jersey in the ’89 ‘Bank Race’ as world amateur road champion. It was the year the East Germans, Russians and Poles all sent their high profiled teams – and we won!

“I think the photo (above) was the second stage of that year’s race, a criterium in Byron Bay, before the next stage which went from Byron to Grafton (196km)

“Great memories and times with good mates albeit a very long time ago! Note,” adds the former rider who is now the general manager of Shimano Australia, “no STI and Di2 not even thought of!”

“I can only recall that Joachim won the world amateur road championships at young age as well, was  a great individual time trialler. I am sure that he also rode the Bank Race. But I only knew that he passed away with cardiac failure in his mid 20s and am sure that it was when he was professional.”

“As young Aussie riders at the time of his visit to Australia, we thought we were going pretty well. It wasn’t until the hammer was down that this guy showed us a few things about racing. Being hard, all the foreigners were the ones to follow, but we knew that Halupczok could win on his own and was fearless in attack.”

“The history of the late Joachim Halupczok makes me think of lost chances and fragility of human existence. It may sound banal, but his example reminds me of talents who never got the chance to shine and what is often missing in the picture; that participating in top-level competition may, in some cases, lead to dangerous disorders. Incredibly talented, Halupczok could have been counted among the first generation of Polish riders entering the world of professional cycling over fallen fences of the Berlin Wall, following the Italian path marked earlier by Czeslaw Lang.

“His solo raid in Chambéry is still remembered and the memory is even more vivid in the wake of Kwiatkowski’s charge to rainbow jersey in Ponferrada.

“Halupczok’s short life, illness and tragic death will always remind me of how important the development of young riders is, how careful you need to be when introducing them to sport’s top level, a world beset with difficulties – both of physical and moral nature. This is still the lesson to be learnt in Poland – with more and more opportunities and resources available, ensuring that no talent will be wasted should be the top priority of all cycling stakeholders.”