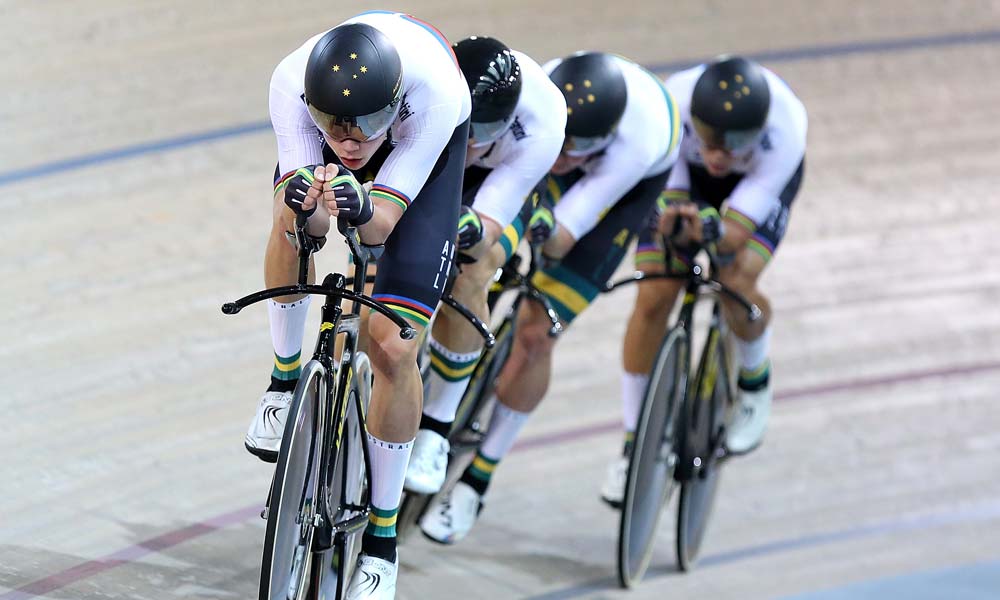 The Oceania track championships began yesterday. This is a competition few really understand but it is yielding some impressive performances.

Pluck four blokes out of a collective of hopefuls, send them to New Zealand, let them ride around a velodrome together in a tight formation. And watch the clock. After four kilometres, and three minutes 52 seconds, the number freezes: “3.52.421” it says on the screen.  A little while later they step onto a podium, get a gold medal and an odd coloured ‘prize’ jersey.

What’s that? Well, it’s something you can become on a random Monday evening in 2017. And it’s part of a contest that receives little recognition.

Admittedly it is November. That odd month in cycling when things happen but when it also feels like there’s a moment for respite. Professional road riders are clicking back into their pedals and rolling out the early training kilometres in advance of a season that begins in January. Cyclocross riders are getting into the thick of their season in Europe… but in Australia the buzz of those races is somewhat lacking. BMX freestylers are fresh off the world championships and discovering how their sport has changed now that it’s part of The Olympic Program. Social cyclists are out in force in Australia as the days get longer and warmer and the weather lures people out in numbers.

And track riders are posting impressive times in an event that few really understand. 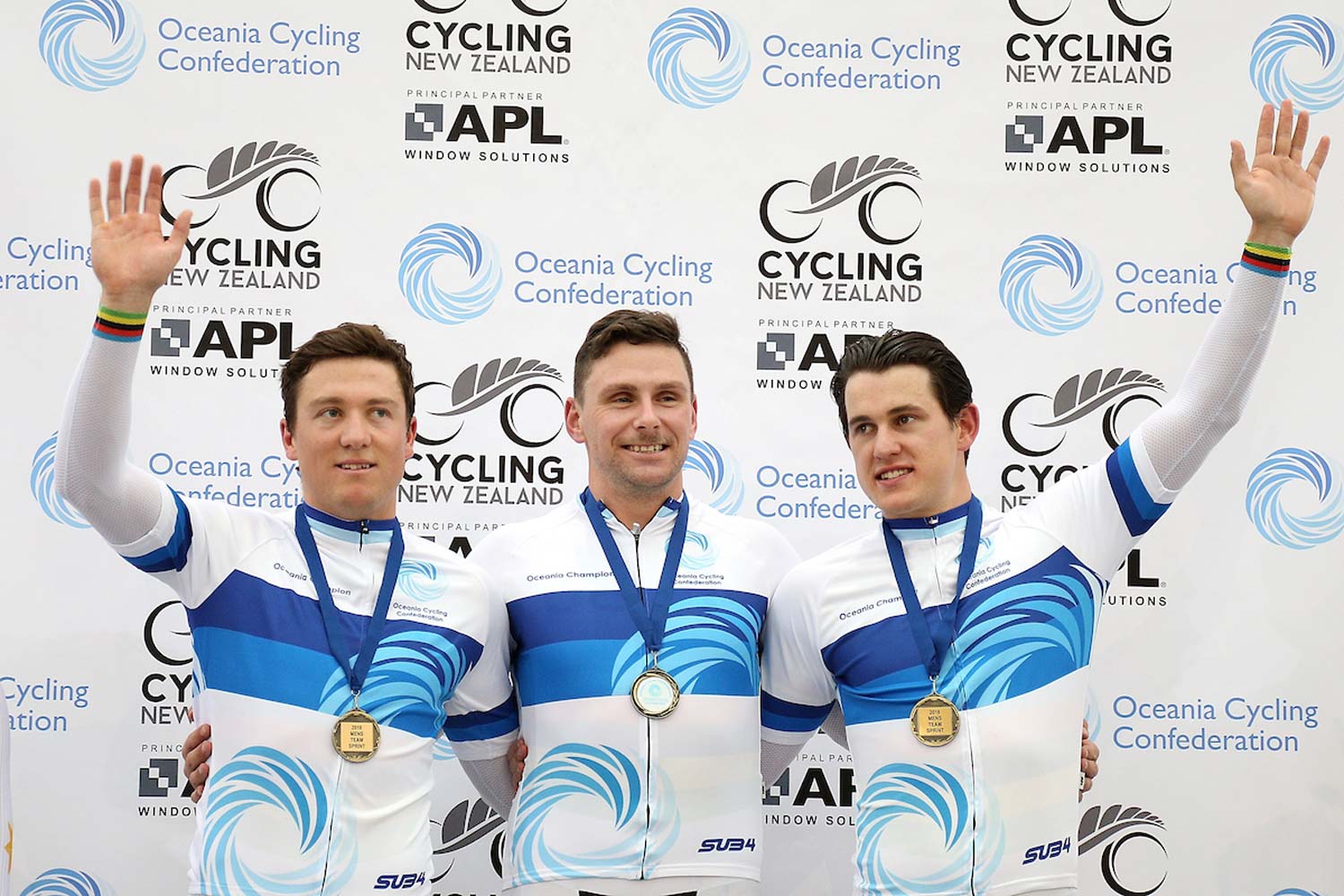 The Oceania champion’s jersey has a pretty design even if few in the world would know what it is. The host nation of the 2017 championships, New Zealand, claimed gold in the team sprint (above).

It would require a little bit of hunting to confirm, but by my calculations this is one of the few “championships” that doesn’t include a weekend. Monday to Thursday; qualifying in the morning, finals in the evening.

The Avantidrome is the venue and there’s live streaming available for the fans who want to watch. You can even go along to the track, pay NZD$5 and watch world-class athletes strut their stuff. (That’s the morning session – and kids can get in for free.)

Spend a little more, $10 in the evening (for adults, $5 for kids), and you can see the finals. Invest a total of $40 and you can attend every session.

And what you’ll see are world-class times being ridden by champion riders who have invested time and effort into this wonderful thing called track cycling.

But if you can locate a start sheet, let me know… I’m still hunting for the names of those contesting this event, or even a reference to the actual countries participating.

It is a legit competition on an impressive track inside an amazing facility in Cambridge that is home to New Zealand Cycling. But, really, what is the Oceania championships?

Well, in advance of the 2018 Commonwealth Games, it’s a great opportunity to test form and race likely rivals for what’s going to unfold on the Anna Meares Velodrome on Queensland’s Gold Coast next April. (That’s when 19 events will be contested and there’ll be some chest beating from Aussies, Kiwis and Brits. Tickets start from $49 – for adults, $25 for children – and don’t be surprised if a world record or two comes from this competition.

Meanwhile, midweek in Cambridge, some cyclists are putting in amazing performances to post impressive times in an event that is virtually anonymous.

But make no mistake, if you want to see world-class sport, the $10 investment on a seat for the opening night of finals would have been money well spent! 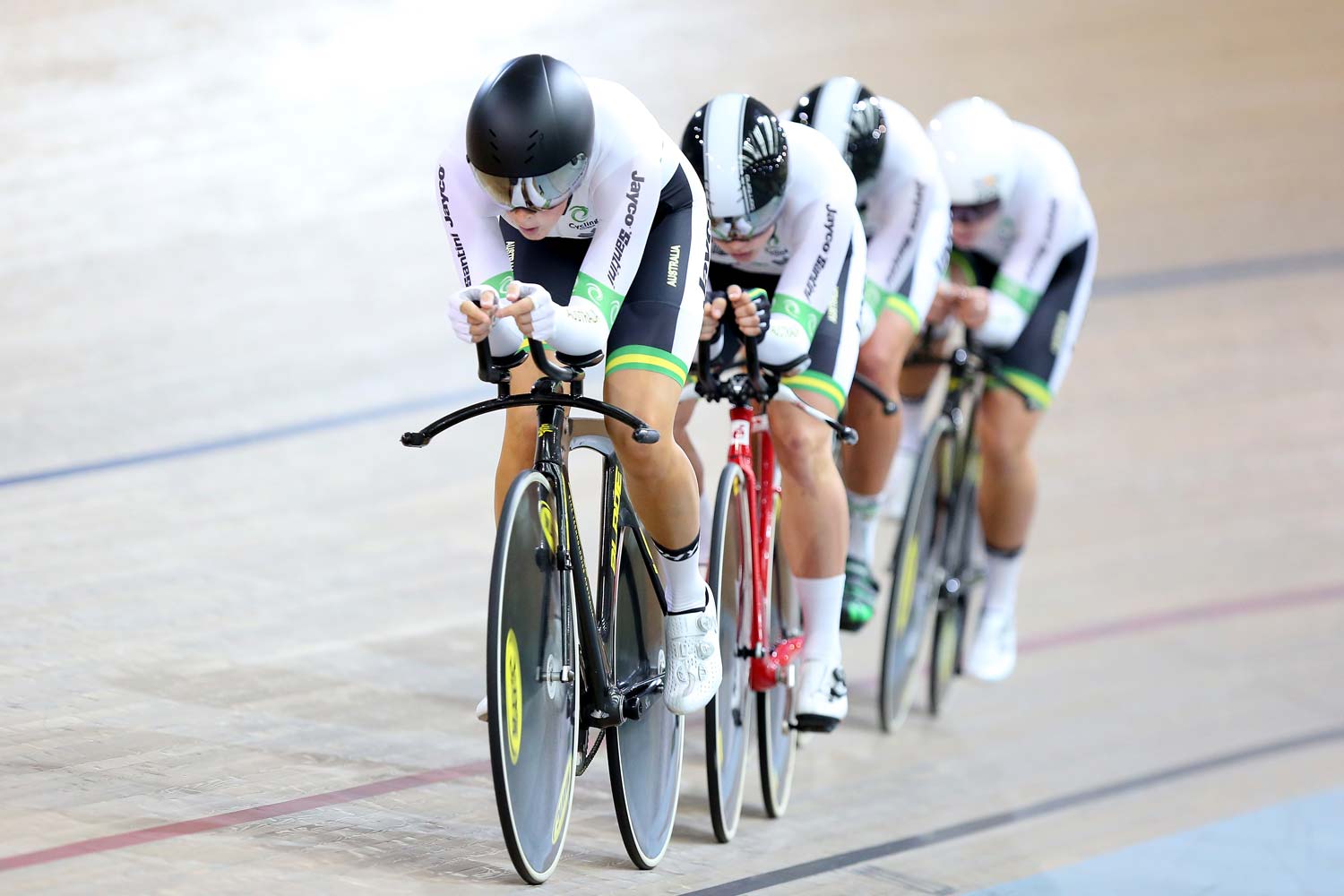 One of the two Australian women’s pursuit teams that ended up on the podium in Cambridge on Monday night (above).

Consider the conquests thanks to a quick perusal of some press releases and the results sheet (or even that live-streaming from Monday night) and we recognise that fast times are being set on the Avantidrome.

In other words, what happened last night gave the home crowd in Cambridge reason to cheer. 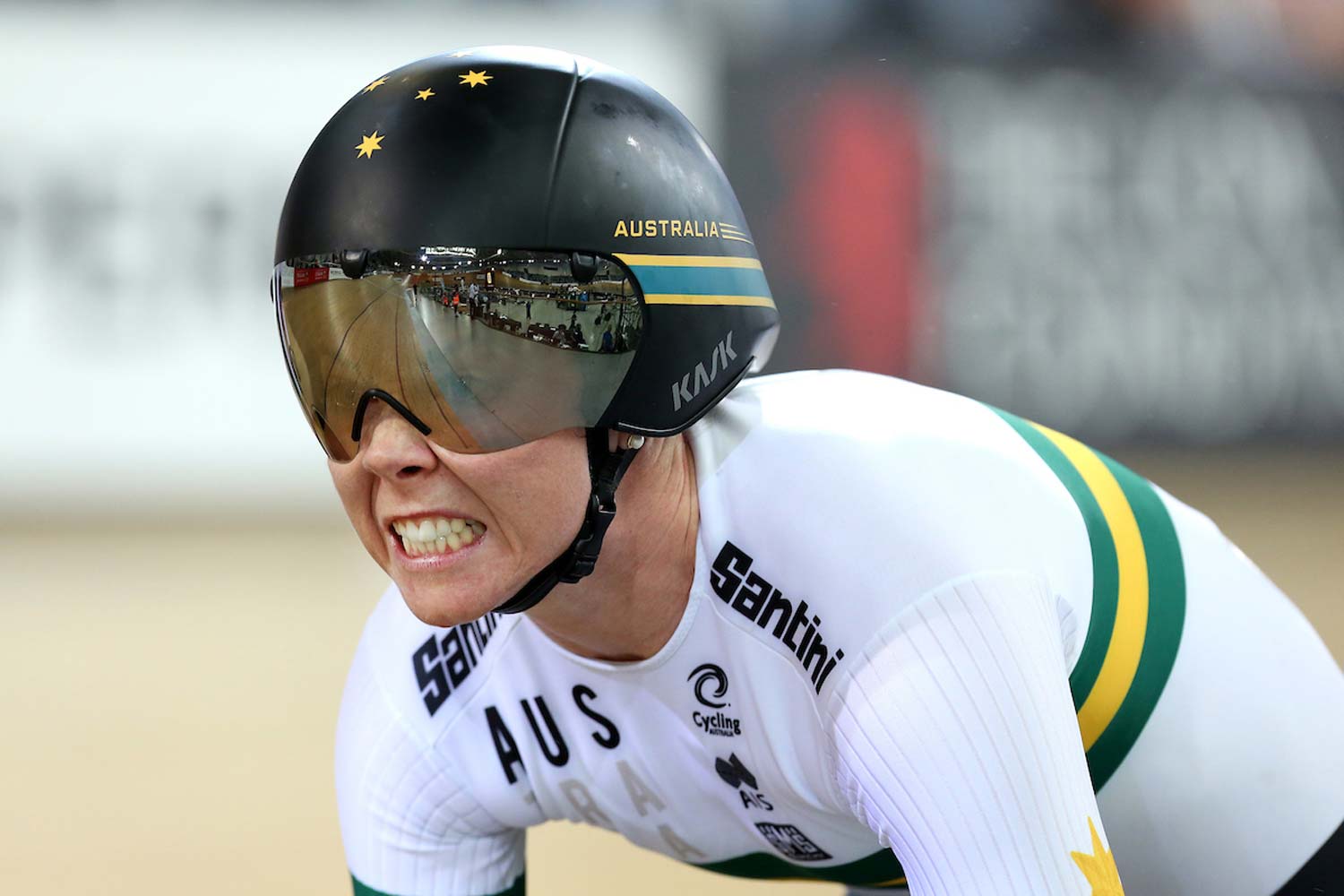 Kaarle McCulloch (above) set a PB in the 500m TT last night.

Kaarle McCulloch keeps on keeping on and she posted her PB in the good old 500m time trial on Monday night. A sub-34 second effort (33.848) to prove that she is on target for another great Commonwealth Games performance.

“To back the team sprint times up with the 500, and to finally go under 34 seconds – it has been a career goal, so I’m really stocked,” said McCulloch afterwards.

Cycling Australia’s press release tells her story and it deserves recognition: she has accomplished a lot in cycling and McCulloch’s conquest is an impressive one.

“When I crossed the finish line all I heard was ‘848’ so I thought I have had a shocker here and ridden 34.848, then I saw the 33 and my heart just skipped a beat. I have been searching for that my whole career…”

That’s what the Oceania championships is: a chance to test yourself, post a PB, build confidence. And you can do it all before the weekend. Two gold on the opening night for McCulloch – and a big cheer from here in Sydney (after reading the press release). 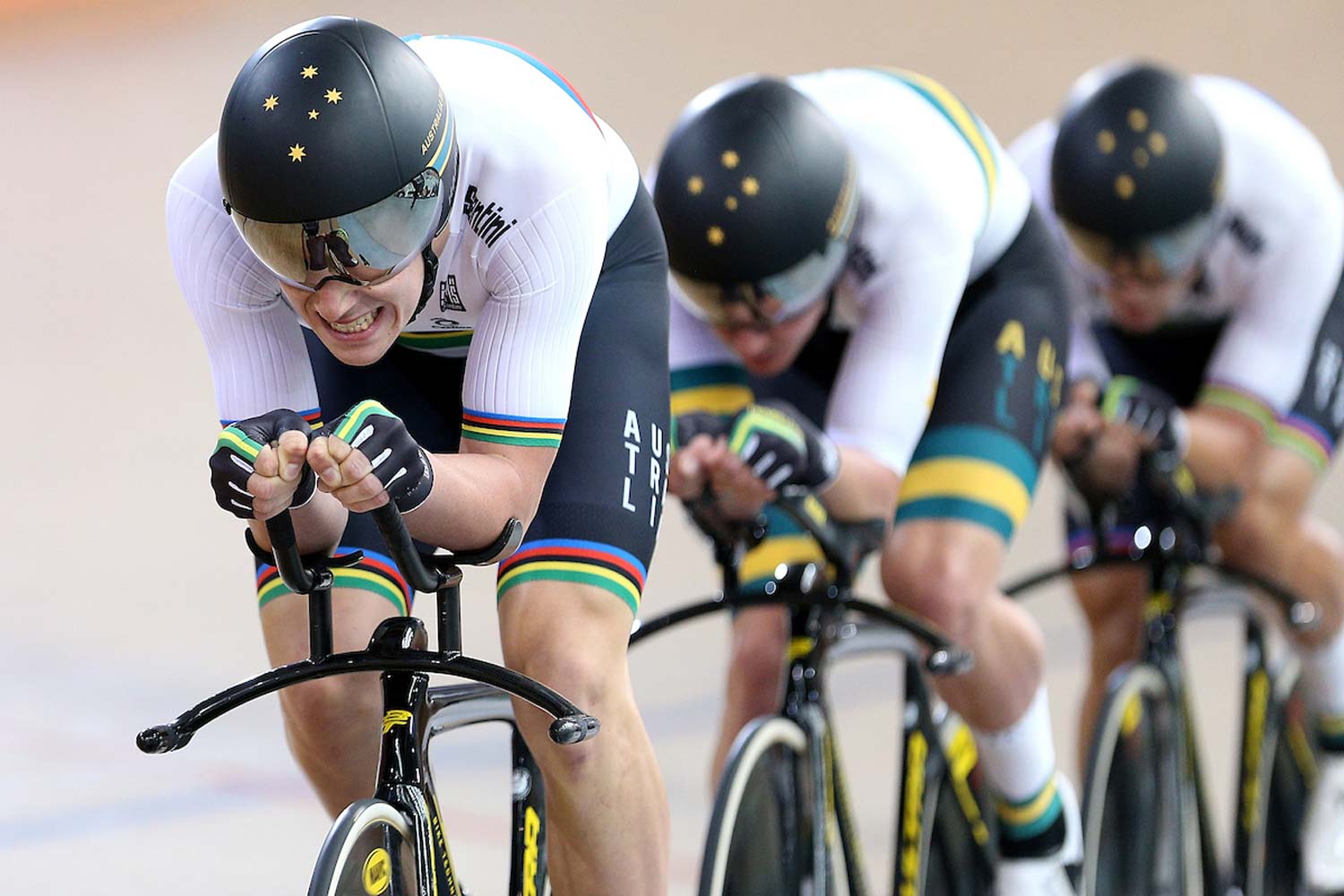 This brings us back to the 3:52.421 and the four blokes riding in tight formation. Again: if you know track cycling, you know that this is fast!

The first time the four minute barrier was broken was in the final of the Olympic Games in 2000. It was a monumental achievement but the progression of pursuiting since those now-distant days has been immense. To even think that a 3:52 could raced by four guys who haven’t ridden together a great deal would have seemed laughable only a few years ago. But it’s happening on a Monday night at a championships that few really understand.

The team pursuit, unfortunately, still receives scant coverage (in all but an Olympic year) but the time posted by O’Brien, Yallouris, Kerby and Howard also deserves recognition for it is phenomenal! That it was achieved by a quartet that has come together only recently – one that includes a 19-year-old who also contested the points race on Monday night (claiming the bronze medal) – makes it even more impressive.

A standing start. A cohesive performance. An average speed of 61.957km/h. And, alas, no lap splits to help us trace how it was achieved. But cycling fans understand what this means and why it deserves to be referenced at a time when track cycling is fast becoming the focus of the Australian team.

There is a long history of team pursuiting in Australia. It is a glorious, captivating event. It is beautiful to watch and painful to ride. And to do it in 3:52 is awe inspiring.

But it happened at the Oceania championships and, alas, not many people are going to hear about that ride on a random Monday night in Cambridge, New Zealand.

Track cycling is beautiful and fast times should be lauded. But that’s not how it is in 2017. Instead, it remains part of what seems to be a well kept secret. Maybe one day, it will once again become a focus of the media and receive the recognition it deserves… but don’t count on that happening soon. There’s too much fun to be had in social bunches, on the trails, and in your shed while connected to a peloton via WIFI and a smart trainer. That’s what cyclists can also do on a Monday night in November 2017: ride their bikes while elsewhere elite athletes are racing them and posting world-class times in a competition that few understand.

Congrats to all who are keeping the track cycling tradition alive in Cambridge this week.

*Although I’ve followed cycling for over 25 years, I’ve got no idea what “Australia gold” and “Australia green” means… sorry that there is no explanation. (Rob)