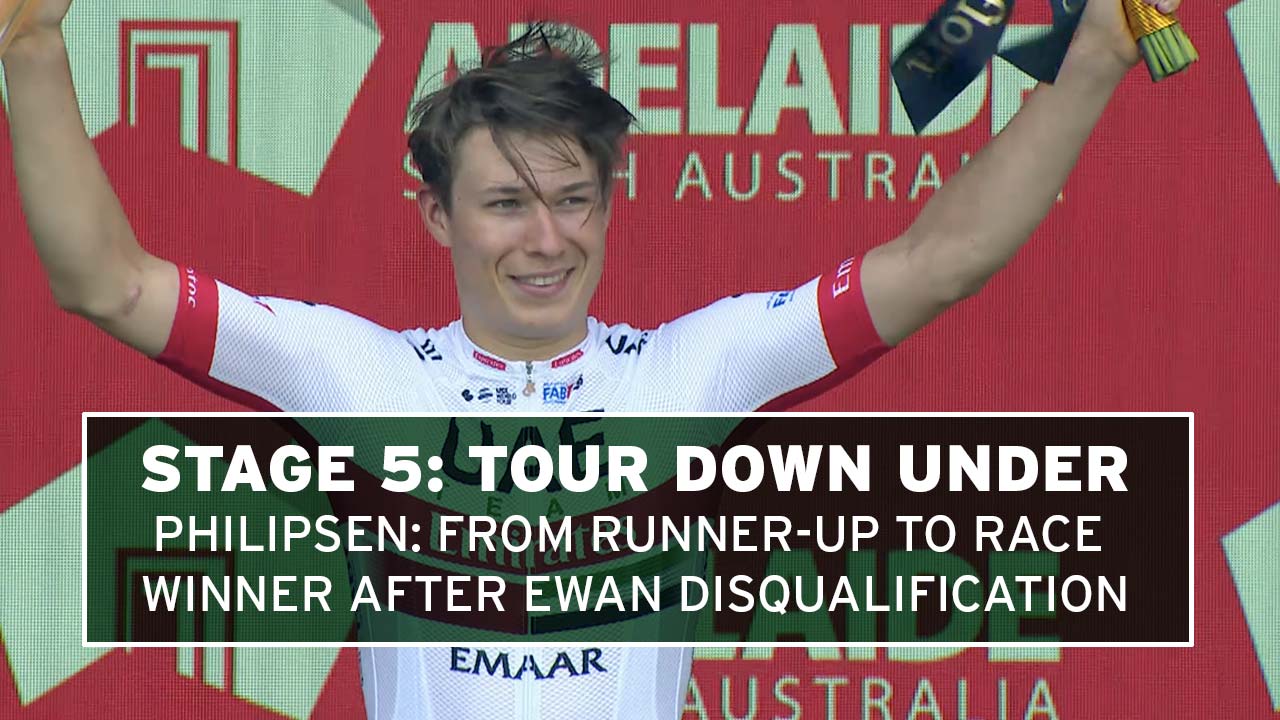 Philipsen: from runner-up to race winner after Ewan disqualification

Although originally content with his second place behind Caleb Ewan in stage five of the Tour Down Under, the 20-year-old Belgian was later declared winner…

First there was the crash that threatens the overall lead of Patrick Bevin. He fell with 9.8km to go in the fifth stage, a different kind of fifth stage at the Tour Down Under… not the one we’re used to, not the one that stops atop Old Willunga Hill – that one comes tomorrow, in stage six.

We await news about the fallen New Zealander who was in stomping good form at the 2019 TDU. The winner of stage two landed heavily on his right knee, was tangled up in bikes and took a long time to get moving. And yet, despite the setbacks, he somehow made it to the finish in Strathalbyn with the lead bunch.

No time lost, but the injuries may yet rule him out of the final showdown.

Get well soon, ‘Paddy’… there’s a lot of people thinking of you. We’d rather see you racing up a climb in a leader’s jersey than lying in a hospital.

Secondly, there was a head-butt as two riders both tried to be in the same place at the same time; Caleb Ewan eventually muscled himself into position, right on the wheel of Peter Sagan. Jasper Philipsen did fight for the place he wanted to be, but he’s in his fifth day of racing on the WorldTour.

When the predicament became too dangerous, he conceded. But his race wasn’t over.

“For sure it’s difficult,” Philipsen said about the headbutt.

“Caleb is one of the strongest sprinters in the world and I tried to also take my position and go into the wheel of Sagan but he was already there… So, it was a bit of a fight in the heat of the moment. But then, when he bumped me, I went a little bit [backwards] because I didn’t want to mess too hard.

“Then the sprint started and everybody came over from the right and left, so I was a bit afraid to get boxed in. Then, in the end, I could get through.

“I felt pretty strong today and came pretty close in the final; it was a close finish but at the end I can be happy with a second place.”

He could, in fact, be happier. He’d soon find out why. He is the winner. 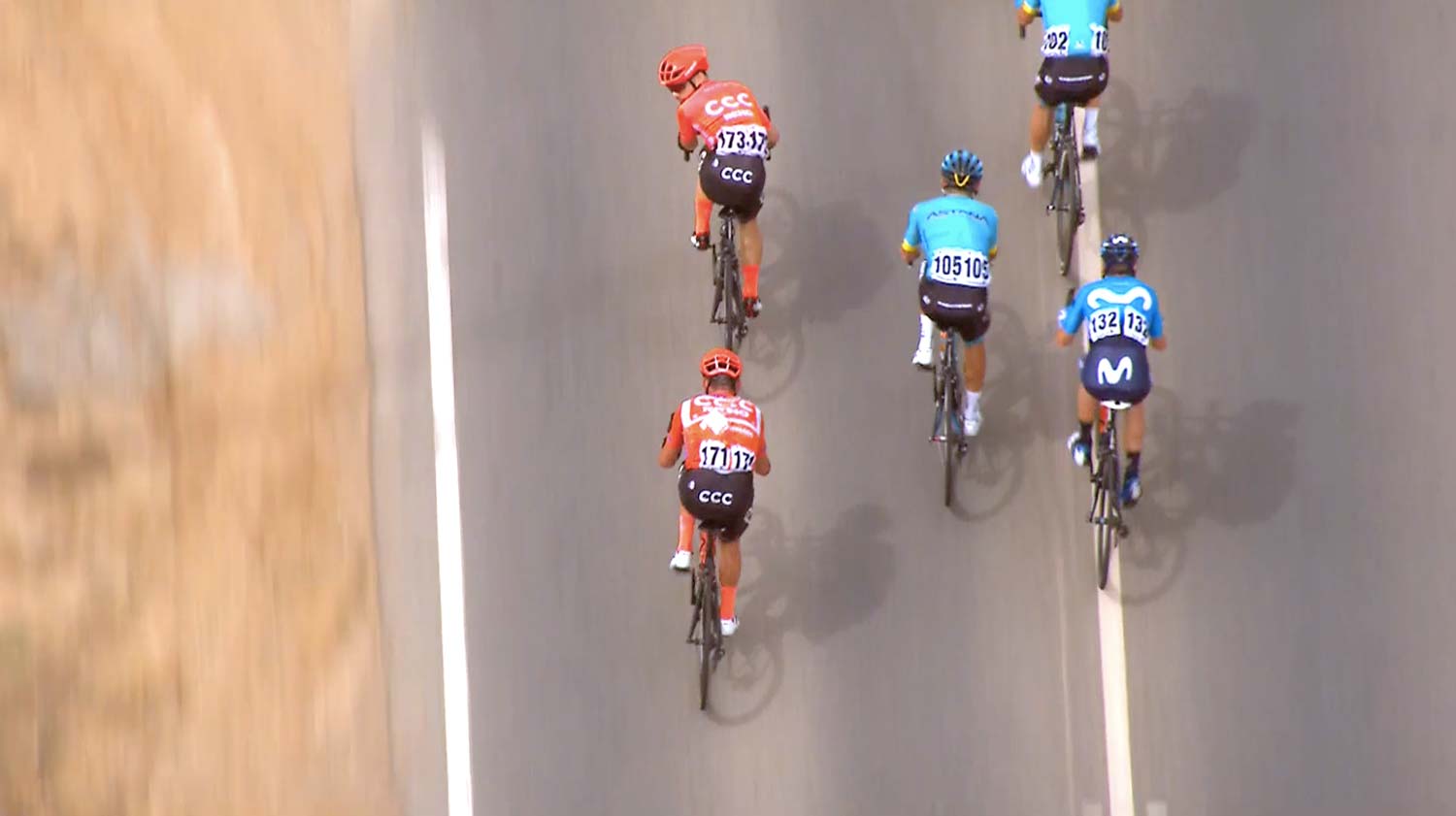 The sprint was beautifully executed by Caleb Ewan, just holding off the late charge from a rider who is destined to become a major rival in the near future, if Philipsen is not already that… in his first race with UAE Team Emirates.

The problem is what happened before the sprint.

The race jury didn’t like what Ewan did. They took a few minutes to review the situation but eventually declared Philipsen as the winner in Strathalbyn. He is just 20 years old. This is just his fifth day of racing in the WorldTour. He is a force on the bike and a gentleman in an interview, even when done only moments after what he thought was a near-miss (even if it turned out to be a victory). 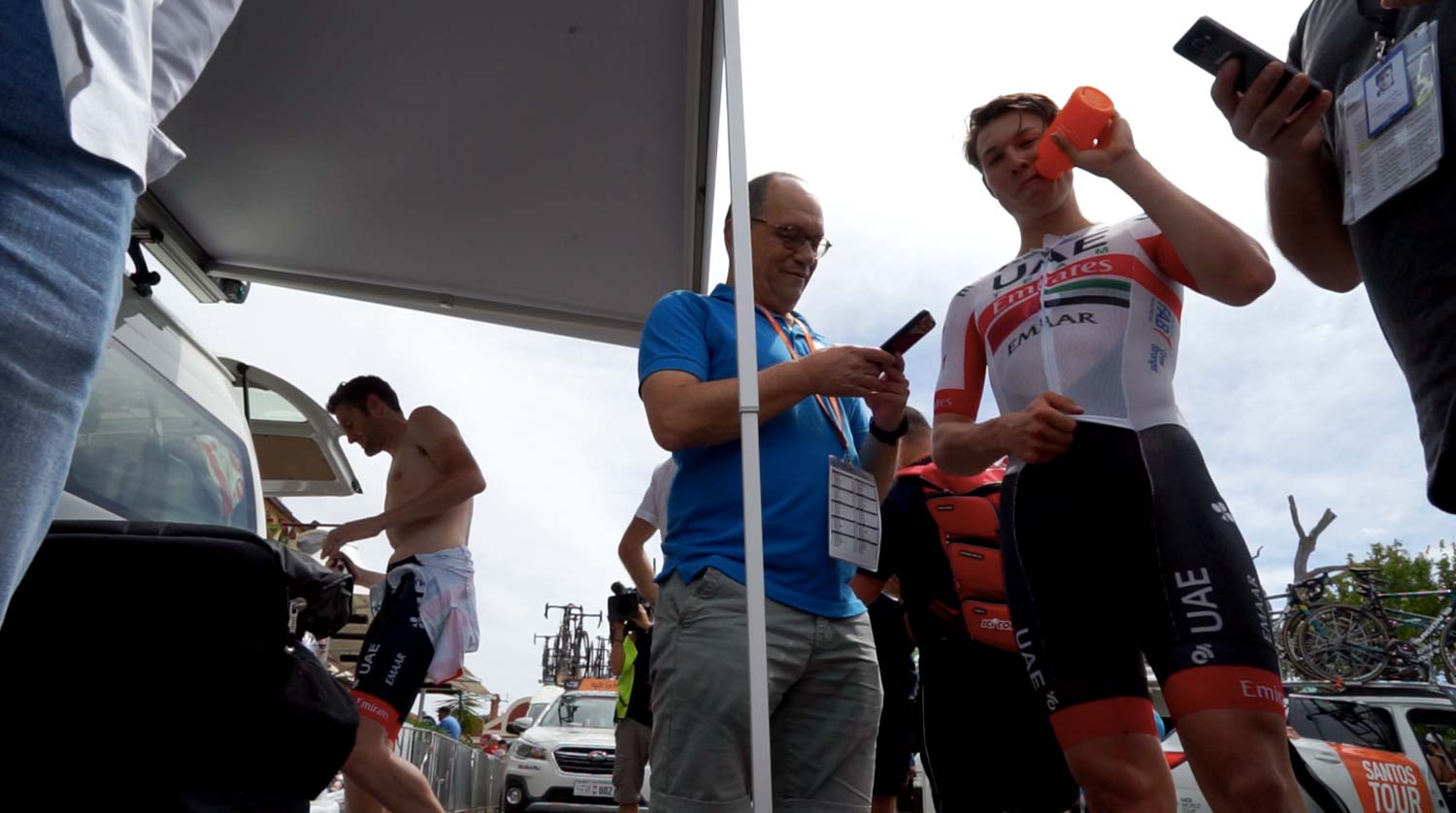 Philipsen (above), moments after finding out he had earned his first WorldTour win… in his fifth race with UAE Team Emirates.

Philipsen arrives in the WorldTour with huge credentials after doing his ‘apprenticeship’ at the Hagens Berman-Axeon managed by Axel Merckx. He was on the ‘shopping list’ of several major teams, including Deceuninck-Quickstep, and the CCC Team of Bevin.

Ultimately, he opted for UAE Team Emirates as – despite his youth – he has been told by management that he will earn leadership status in some of the races he’d like to target.

Get ready to hear his name a lot more. Not only did he show good grace when he was hindered with a headbutt, not laying blame on Ewan and accepting his second place with a smile, but he is fast, amiable with the media, clearly calm under pressure, and capable of beating the likes of Peter Sagan (officially second), Danny van Poppel (third), Jens Debusschere (fourth) and Elia Viviani (fifth). 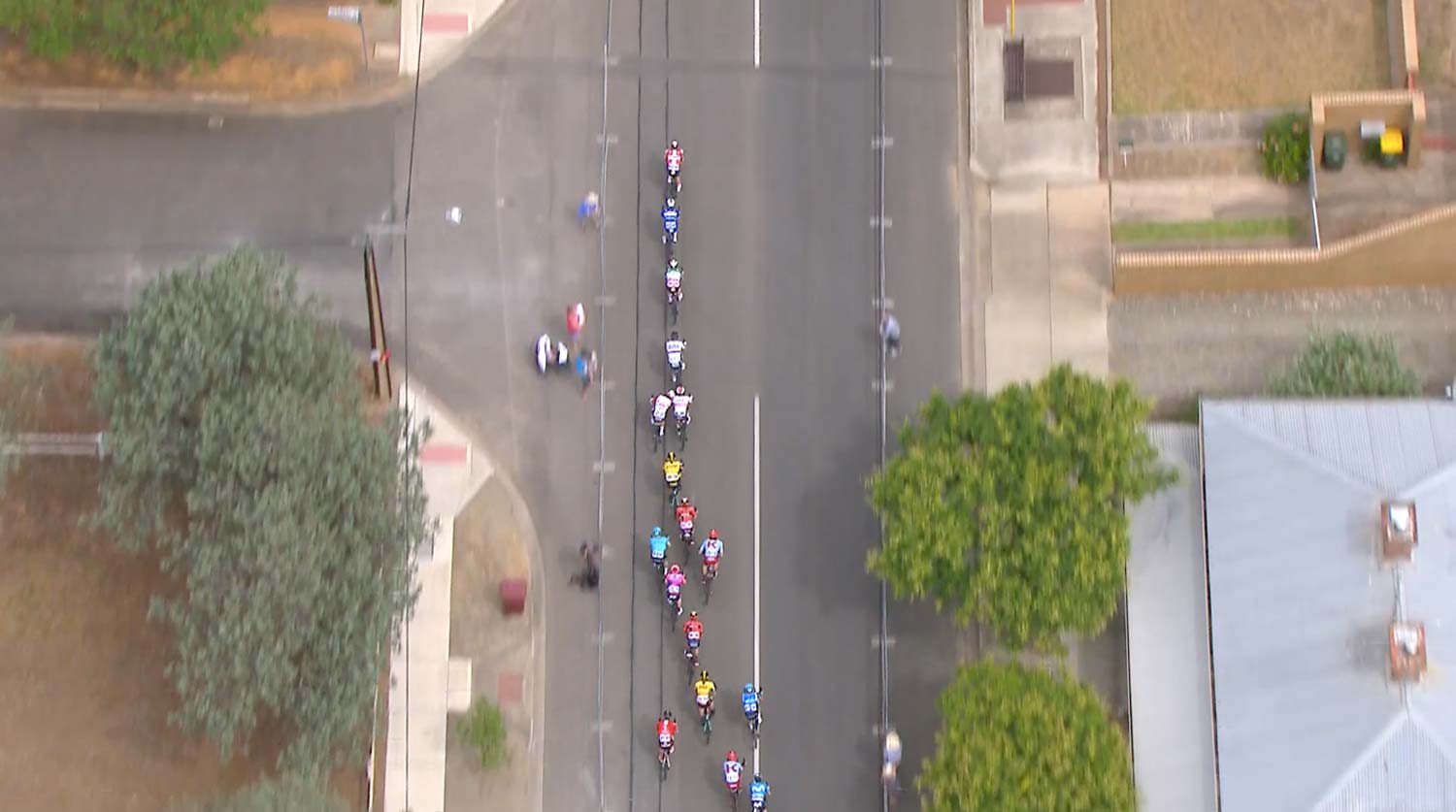 A shoulder to lean on… footage shows Ewan using his head to try and push Philipsen out of the way (above).

Watch the video, see his reaction, understand the circumstances and recognise that the fifth stage of the 2019 Tour Down Under is a significant one, something that will be remembered for some times. It didn’t finish atop Old Willunga Hill but it did reveal a star of the 2019 WorldTour. 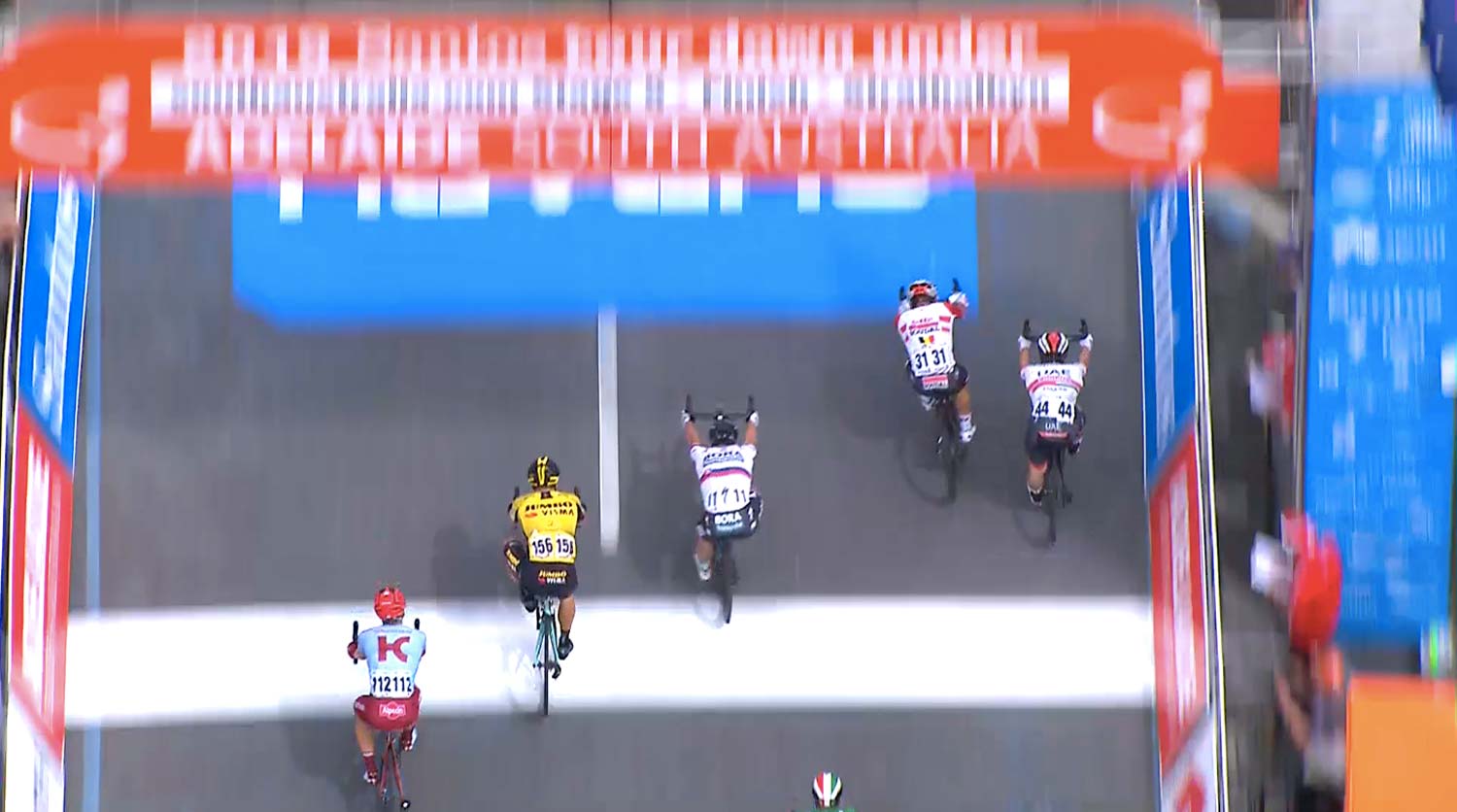