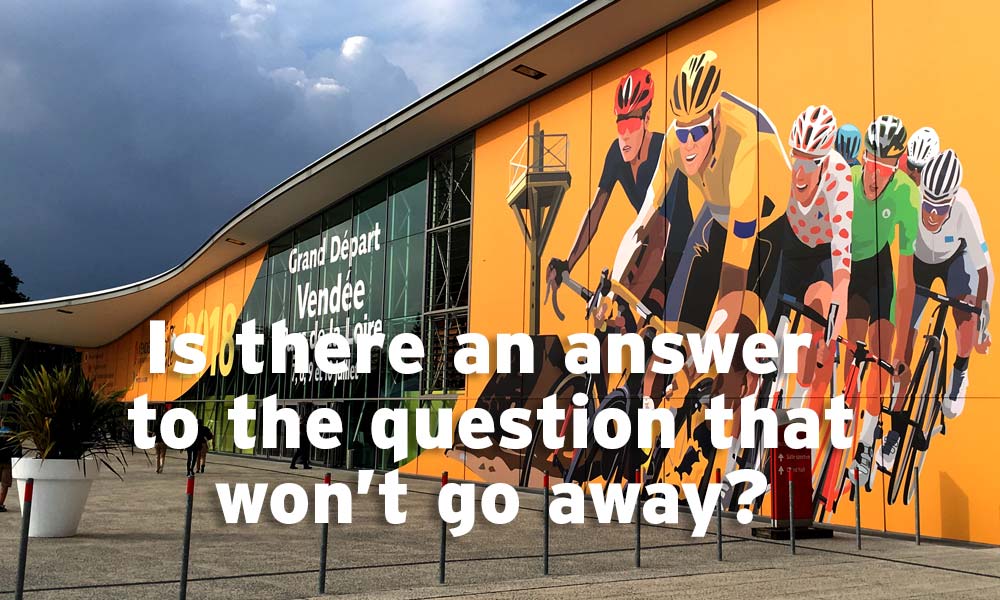 On the eve of the eve of the Tour, one question was asked over and over again… so often, in fact, that it is now redundant as no one really has the appropriate answer.

“What do you think about the decision regarding Chris Froome’s Salbutamol case?”

Heard that one before? If you haven’t, then it’s likely that you’ve got nothing to do with the Tour de France in 2018. It’s apparently a journalistic necessity but, only a day out from the start of the race, it’s also largely redundant. What does it matter what people think?

The verdict was announced. The saga has been reported. The fall-out is significant. And almost everyone asked seems to share the same opinion: okay… it’s happened – let’s get on with the race.

Oh yeah, and can we please stop talking about it?

It’s not a matter of ignorance. No one is out there trying to find sand deep enough to bury their head in it in a quest to shut out the obvious. I’m yet to hear anyone start uttering “rhubarb, rhubarb, rhubarb” to themselves in the hope of drowning out the query, hoping that a vacuum will suddenly come along and suck it all away and allow us to move on.

It’s like the French question and answer game: Ça va? Ça va. It goes? It goes.

There was a situation that seemed like it may have brought down the champion of four Tours de France. The official line is that little has changed: Chris Froome had an AAF. But there was nothing adverse about it. Shall we move on?

That’s the theory. That’s the response you’ll get from just about anyone you ask the question.

Someone who is in the pro cycling business that I spoke to about it today summed it up pretty well. And he only offered the following answer because I, like so many others in the press room today, felt it important that the topic was at least raised…

What was the vibe when you heard the UCI’s news about Chris? Was there talk amongst you guys? (Never mind the rider, it’s irrelevant in the broader scheme of things: every press conference I attended on the eve of the eve of the 2018 Tour included the same question – it’s only the recipients that varied.)

The answer from Rider X is appropriate.

“I think the party line you’re going to get from every is pretty much going to be the same but I do think it’s positive for the sport that it’s over,” he said.

“Having that case remain open is ugly. It’s unfair. And it’s ugly for the sport.

“The due process wasn’t followed from the start. The fact that it’s been out there… and now it’s resolved, is good. We’re here to race and he’s been cleared to race and we’re going to race in the hope of finding out who the best guy for this year’s Tour de France is, with no questions.”

All of what happened is not ideal. But it’s not going to change now, no matter how many people are asked to answer the same question.

Are we happy that cycling has been dragged through the mud again? No.

Is it an ideal scenario? Not at all!

Did the case damage the sport and the numerous processes that have been implemented in the last 20 years to try and ensure that the Tour de France doesn’t, once again, become the Tour de Farce? Yep.

There was a huge catalyst for change 20 years ago and systematic doping was the reason. It was happening in the lead-up to the 1998 Tour. It continued after the 1998 Tour.

The extent of the doping was exposed by the Festina Affair and there was no denying that there was a problem, a huge problem. It was rank. It is stupid that people thought they could just merrily continue injecting an elixir and winning races and stating “I never tested positive”, as though that made it okay.

But pro sport is stupid sometimes. It can also be amazing, inspirational even… but only if you allow it to inspire you.

One reality is that no one will love pro cycling if there is no racing. For now, it continues: the Tour is about to start. The judgement has (finally) been handed down. There could be appeals. There could be further action. There will continue to be questions. There will always be opinions.

It doesn’t really matter what Rider A, B, or C says anymore. It doesn’t matter if Scientist X argues with Journalist Y or Lawyer Z: the ruling has been made – and we all know it took long enough. Let the discussion continue; actually, please let’s make sure that it does continue. It’s necessary, but so too is racing if we’re going to appreciate what pro cycling is.

We should never see cycling – or any sport – put in another situation like we’ve just gone through. But is it likely to end because of an endless volley of questions? No.

Ultimately the answer comes with a more rudimentary question: could everyone please just race their bikes to the best of their ability – without artificial assistance?

Wouldn’t that be nice?