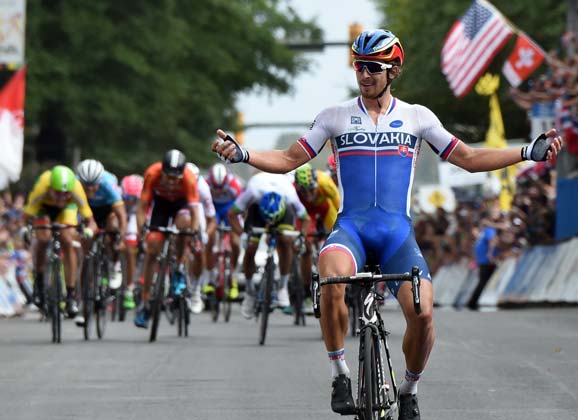 Sagan: taking on the worlds and winning

Only one man can wear the rainbow jersey as elite men’s road race world champion each year. And the reign of the new rainbow will actually last 383 days. Peter Sagan has that honour. From Richmond 2015 through to his title defence in Doha 2016, the charismatic performer will get to remind everyone of what we saw on the final Sunday of September 2015: that he was the best rider in a most entertaining race. 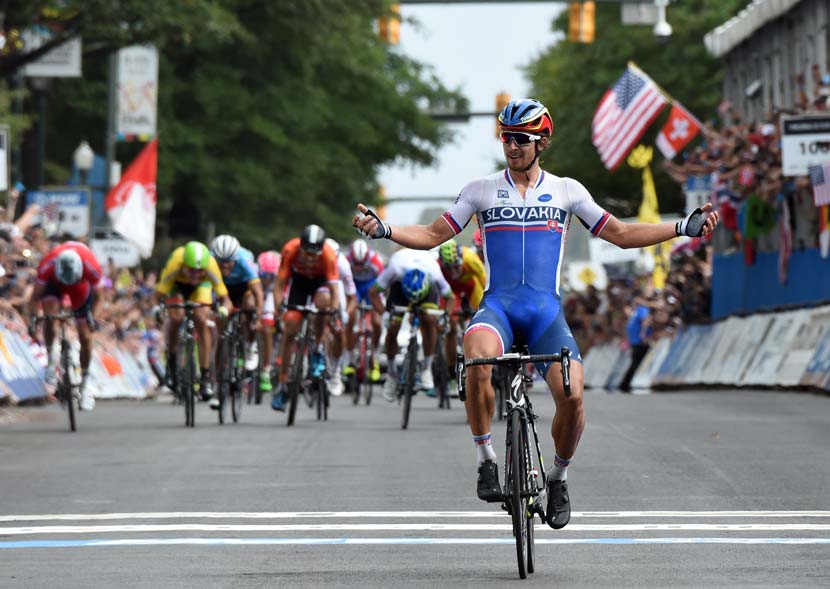 Whatever Michal Kwiatkowski can do, Sagan can do… too.

The two Eastern Bloc riders who have been rivals since their teenage years are the latest world champions. Poland and Slovakia are now on the honour roll of this prestigious one-day race.

Kwiatkowski and Sagan are both the first riders from their countries to have won the elite men’s road race title. The rainbow jersey, cycling’s symbol of success is getting a far more global following than it once had.

In the last seven years, there have been five precedents set: riders from Australia, Norway, Portugal, Poland and Slovakia have earned their first world championship titles*.

And the most consistent of the also-rans – the other medallists – has been… Australia. In 2009, Cadel Evans started a succession of riders from ‘new’ nations winning the rainbow jersey. And his compatriots have since scored a bronze, and three silvers: Allan Davis (third in Geelong in 2010), Matt Goss (runner-up in Copenhagen in 2011), Simon Gerrans (runner-up in Ponferrada in 2014) and now Michael Matthews, silver medallist in Richmond.

Twice in succession an Australian has led the bunch home but been just shy of the gold medal. The champions in both 2014 and 2015 gained their advantage on the final climb. Last year Kwiatek spoiled a perfectly executed sprint by Gerrans; the Pole beat the Aussie to the rainbow jersey by one second. And this weekend a Slovakian beat the rest of the world by three seconds, with Matthews leading home Raimondas Navardauskas and Alexander Kristoff to earn his silver medal.

Like he said he would be, Matthews was good. He was patient. He was strong. He was fast. But Sagan was better. 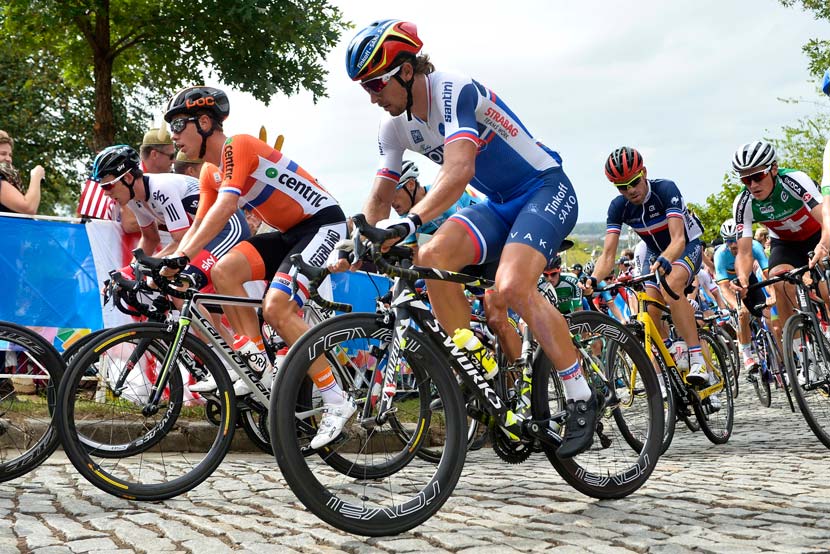 One of three Slovakians in the race… Peter Sagan. (The others were Juraj Sagan and Michal Kolar.)
Photo: Graham Watson

The Slovakian knows what it’s like to be beaten. It happened to him often in 2015; 16 times this year he has been the runner-up but he doesn’t want to be reminded of that, not now.

By the end of September, he silenced his critics by riding with panache. He attacked just once but he did it properly. He made his move on the final lap after following wheels for most of the race. And when he pounced no one could respond.

Adding to his moment of glory is the beautiful fact that he got his win – his world championship – with the support of just two team-mates, one of which is his brother Juraj. How do they say ‘congratulations’ in Slovakia? Gratulujem!

Maybe, just maybe we’ll learn a little more about Slovakia in the coming 383 days. We will certainly find out more about Peter Sagan.

Already it’s clear that he’s an enormous talent on the bike. Off the bike he remains a showman who doesn’t mind expressing his emotions. While the others collected their medals on the podium in Richmond, for example, Sagan jumped off stage – clicking his heels while in mid-air – before landing near where Juraj stood. The brothers hugged and Peter returned to the podium with a large Slovakian flag that he duly held behind him before Brian Cookson presented him with his gold medal and rainbow jersey.

His reputation of doing stupid things has overshadowed some cycling performances in the past. The antics on the podium after finishing second in the 2013 Ronde van Vlaanderen the main digression. There are no excuses. What Sagan did to Maja Leye while the podium girl posed for photos with the winner that day, Fabian Cancellara, is wrong.

Sagan never set out to be any more than a bike rider. He now realises, however, that his stature as a successful athlete puts him in the headlines – when he’s good… and when he’s bad.

In Richmond he used the post-race press conference to try and express his thoughts on global politics. His message was simple: people, we need to change our attitudes.

He only started learning English in 2010 as a 20-year-old on the verge of success but he’s not shy of expressing himself on a global stage in what is effectively his third language.

After his win in Richmond, he spoke to Sebastien Piquet in a speech that was broadcast as part of the global television package as well as being beamed via PA to the huge crowd on the circuit: “I want to just say, because this was very big motivation for me – I want to win today – and say this thing: the population in the world, we have to change because I think in the next years it can be all different.”

Peter Sagan’s reference to the need for change didn’t relate to cycling. It wasn’t about racing. It was about the global situation that, he thinks, “is very difficult”.

The champion has his particular traits but it’s clear that he’s human. There are errors and conquests on and off the bike. And generally he simply tries to express himself – he just happens to attract attention because of his ability as a cyclist. 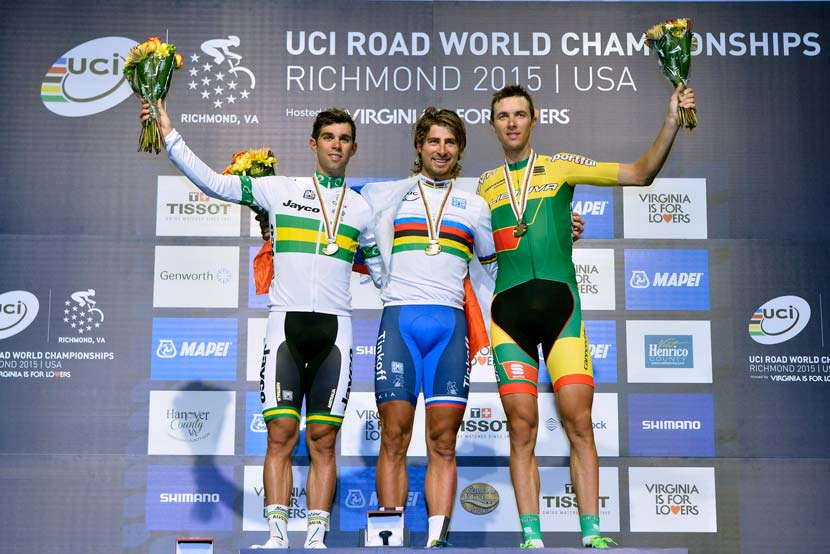 Meanwhile, the most recent runner-up in professional cycling – Australia’s third runner-up in the elite men’s road race at the world championship since 2011 – is coming to terms with another defeat.

Michael Matthews had targeted three races in 2015: Milan-San Remo, the Tour de France, and the world championships in Richmond. In March he missed out by a matter of centimetres (beaten by John Degenkolb on the via Roma). In July he crashed out of contention in stage three… but never conceded and raced all the way to Paris. And in September, he was beaten by a better rider who was bold enough to attack on the final climb; Sagan spoiled the hopes of a rider who turned 25 on the eve of his main objective of the year.

The under-23 world champion from 2010 doesn’t need to look for excuses. Everyone watching could see what happened: Sagan’s move was perfectly timed and he kept enough in reserve to ensure he got to the line unbeaten… this time.

The chasing duties had to be organised quickly and efficiently. And while they got to within sight of the Slovakian, they couldn’t do anything to alter the outcome. The rainbow jersey had already been won.

“Heinrich did a really good job to try to pull it back on the climb,” said the runner-up, referring to the 2015 Australian champion Heinrich Haussler, “but he was working all race today to keep it together and keep me in good position… he didn’t have the legs left.”

Simon Gerrans knows about good legs. He knows what it’s like to see the rainbow jersey slip away on the last climb. And he knows about the frustration of missing out on objectives because of misfortune.

The two Australians were the two protected riders from a line-up of nine. And the two finished second and sixth, respectively. This is a topic for another day, one that needs to be examined by Australian selectors, team staff and riders alike… could one have helped the other to beat Sagan? Possibly. Did they? No. For now, nothing more has to be said. Let’s wait for the emotion to settle and for every perspective to be offered and then we’ll consider the could-have-beens accordingly.

“I came here to win the race today,” Matthews reiterated after the race in Richmond. “But Sagan slid away there in the final, and we weren’t able to catch him.”

For the third year in a row, the bold late attack paid off and everyone else was left to lament what might have been.

Sagan took them all on. And he’s a runner-up no more.

“I did just one attack and it was, I think, the right attack.” Indeed. And it was impressive. Gratulujem! 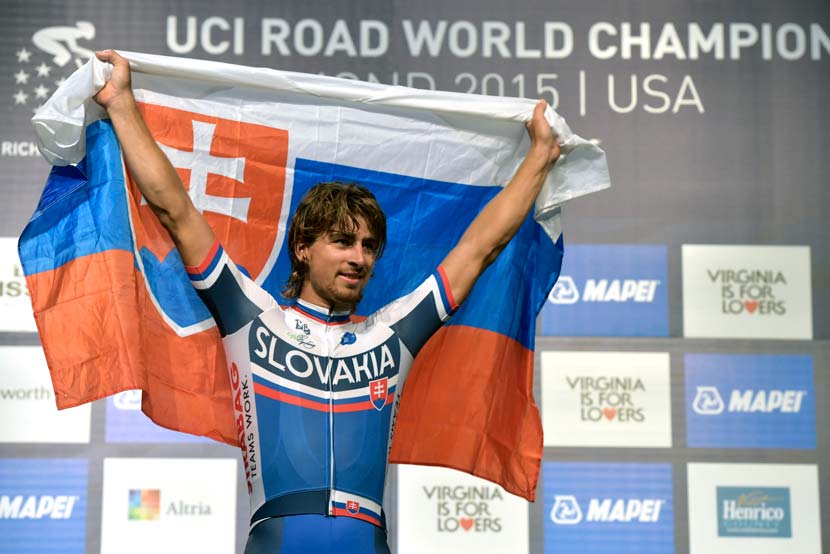 On the podium moments before receiving the rainbow jersey.
Photo: Graham Watson

*Note: this relates to the elite men’s road race.