SBS all set for track cycling world championship coverage… with a new host?

Track cycling returns to screens across Australia again this week with SBS’s coverage of the world championships in Roubaix, France. There isn’t a large Aussie contingent, but that shouldn’t take the gloss off what will be a compelling competition…

The riders are ready, and so too Australia’s cycling network, SBS, which will be broadcasting the track cycling world championships of 2021 from the Roubaix velodrome (20-24 October). When racing begins on the indoor arena, which is positioned alongside the famous outdoor track that hosts the finish of Paris-Roubaix, it will have been 598 days since an elite track worlds medal was won.

It has been a long time since the worlds in Berlin 2020, one of the last major cycling competitions to be contested before the pandemic began to influence how sporting events were conducted. But the scene is set in Roubaix and racing for rainbow jerseys on the velodrome is now only a day away.

Of course, there was that event in Tokyo in August that provided a stunning showcase of track racing, so we could guestimate who might be vying for rainbow jerseys, but travel limitations (for Australian competitors at least) and life in the COVID era will mean that the worlds of 2021 will be a different contest to normal. 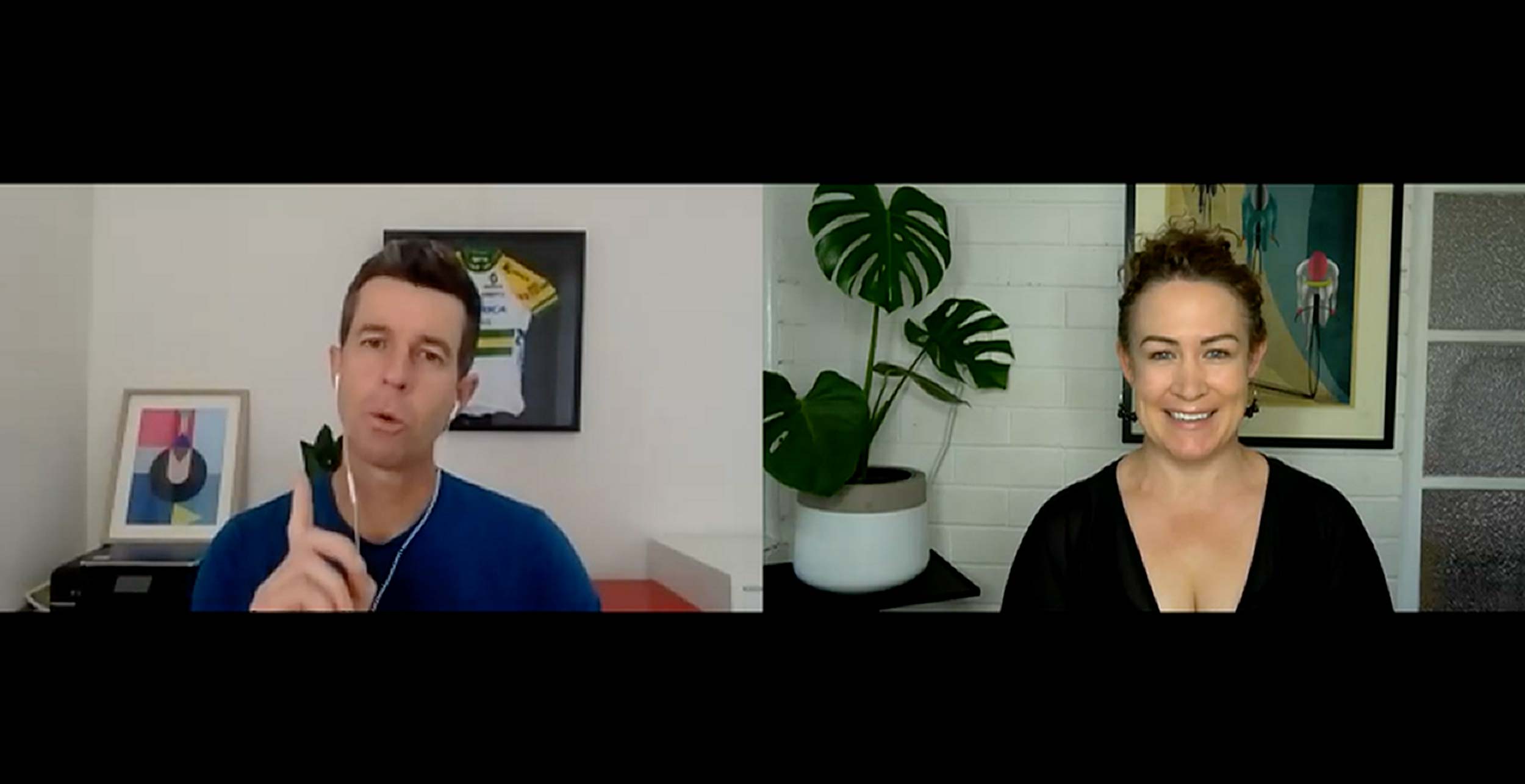 Matthew Keenan and Kate Bates have been regulars on SBS’s cycling coverage for years.

Another big difference for Australian cycling fans will relate to the broadcast – or, rather, the host of the broadcast. SBS is not sending a crew to Roubaix but the network has made a strong commitment to the UCI, with a full schedule of racing due to be shown live via SBS On Demand.

Going on the tradition of SBS cycling broadcasts, we can expect to see some introductions to the racing from the studio in Sydney (or Melbourne, or both) before crossing to the coverage provided by the world feed. And it’s the intro that will have a whole new look when the show gets underway.

Only last week came the surprising news that SBS’s long-term cycling host Michael Tomalaris would be moving on. There was little fanfare and the formal announcement that ‘Tommo’ would no longer be presenting sports like cycling was only two short sentences.

“Mike Tomalaris is moving on from SBS after more than 30 years with the network. We wish him well for his next chapter.”

With that slice of news, a considerable amount of discussion followed. RIDE Media’s article about Tomalaris, referencing an online story by TV Blackbox which broke the news, received a great deal of attention. There has been a wealth of commentary from viewers who have grown up watching ‘Tommo’ talk about cycling and it’s clear there’s going to be a considerable void now a change is imminent. 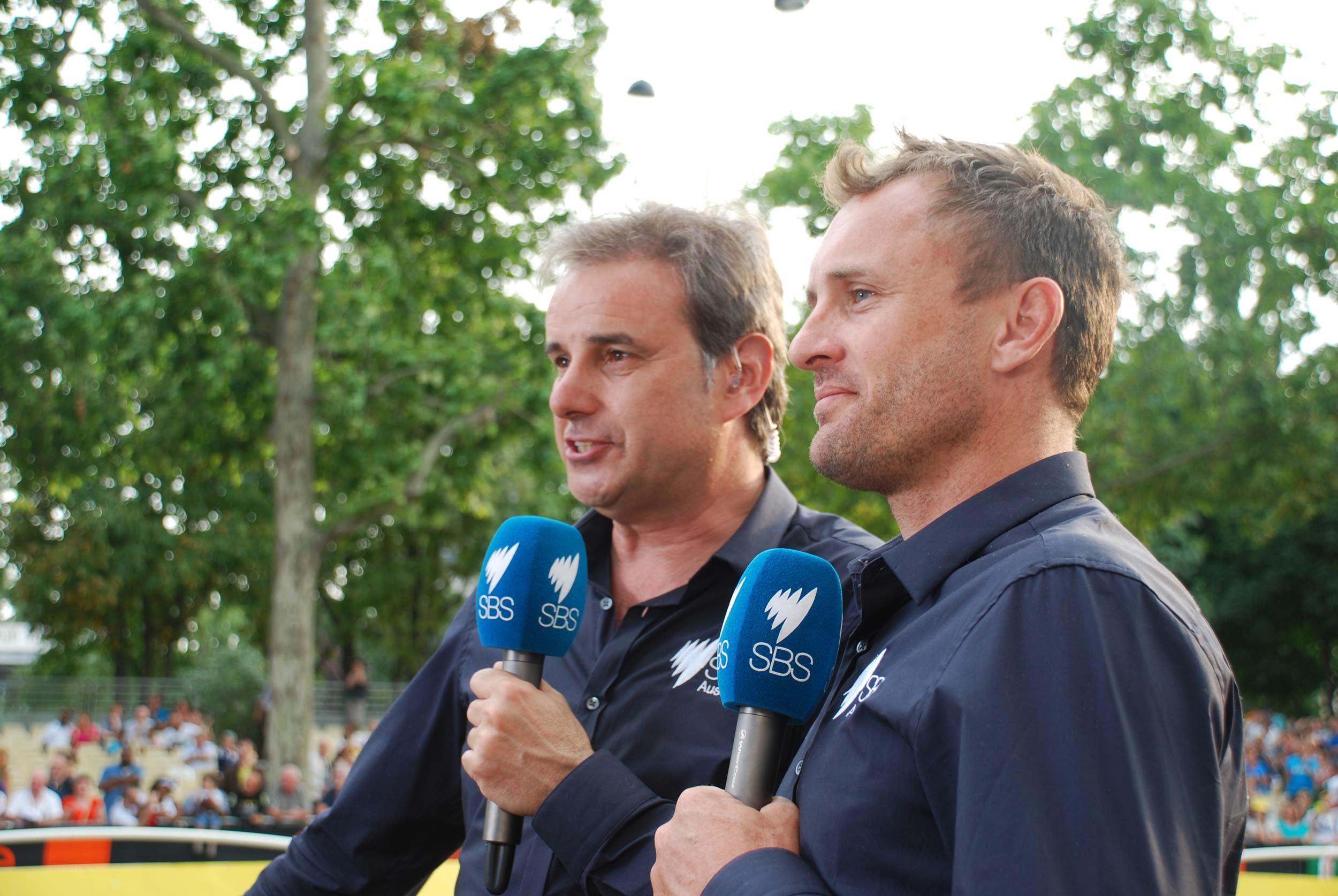 Michael Tomalaris has teamed up with many other cycling presenters over the years, including former riders like Baden Cooke (pictured) and other commentators. Exactly who will fill his role with SBS now that he has “moved on” from the network is yet to be revealed. (Photo: Rob Arnold)

Track racing was one of the many cycling disciplines that Tomalaris presented but he was better known for his work at the Tour de France and other road races around the world. Now he has left the network, who will we see on the screen? We may soon know the answer, although it might not be the ‘replacement’ for Tommo. Instead, it could be an interim host, one of the many other cycling presenters SBS has worked with over the years.

If the days since news about Tomalaris “moving on from SBS” is any indication of the network’s future plans, we can assume that former points race world champion Kate Bates will increase her commentary duties. For something like the worlds in Roubaix, the 39-year-old is a logical choice; she understands track craft and has experience in the media – including stints with Channel 7 (and the network’s Olympic coverage), as well as being a regular on SBS over the years.

The volume of content on the SBS Cycling Central page featuring Bates in recent weeks suggests she is going to have an even greater presence on our screens than before. It does seem obvious, but SBS has been coy about offering comment on the changes in recent days.

We wait for the worlds in Roubaix and when racing begins we’ll likely know a bit more. Still, the silence from SBS about Tomalaris has been surprising. For years, he has been the face of the cycling coverage and yet when it was confirmed that he was moving on, the broadcaster had nothing more to add than the succinct two sentences wishing him well for “the next chapter”.

RIDE Media reached out to SBS and Tomalaris to find out more about the changes at the network. “The statement is the statement,” was SBS’s reply. (The spokesperson also said that SBS would soon explain who will be hosting the network’s coverage of the worlds in Roubaix but, at the time of writing, that hadn’t been confirmed.)

Furthermore, Tomalaris told RIDE Media he had no comment to add but his departure from the network remains a topic of interest in cycling circles in Australia and also in the media world where the broadcaster was a much-loved personality.

For many cycling fans in Australia, there has been one constant over the span of 30 years: Michael Tomalaris has been the face and voice of SBS’s extensive coverage. There has been a lot of change in 2021 and the concept of ‘normal’ seem a distant memory… but, it would seem, many believed that Tommo would always be there, smiling back at them from the screen while he talked about cycling, or racing, or riding a bike. He certainly did come to love this caper, but soon it’ll be someone else’s turn.

Tune in to the worlds via SBS On Demand when coverage from Roubaix begins and maybe you’ll find out about more than just which riders have been able to maintain their form since the Tokyo Olympics. You might also get to see who is auditioning to be the next host for cycling on SBS, the network that’s long been committed to coverage of our beautiful sport.