Talking about cycling tech with Adam Hansen of Lotto Soudal

A request to talk tech with Adam Hansen before the start of a race turned into a five-minute overview that touches on a few hot topics in cycling at the start of the 2020 season. He remains a fascinating character in the peloton and it’s always interesting to get his perspective. 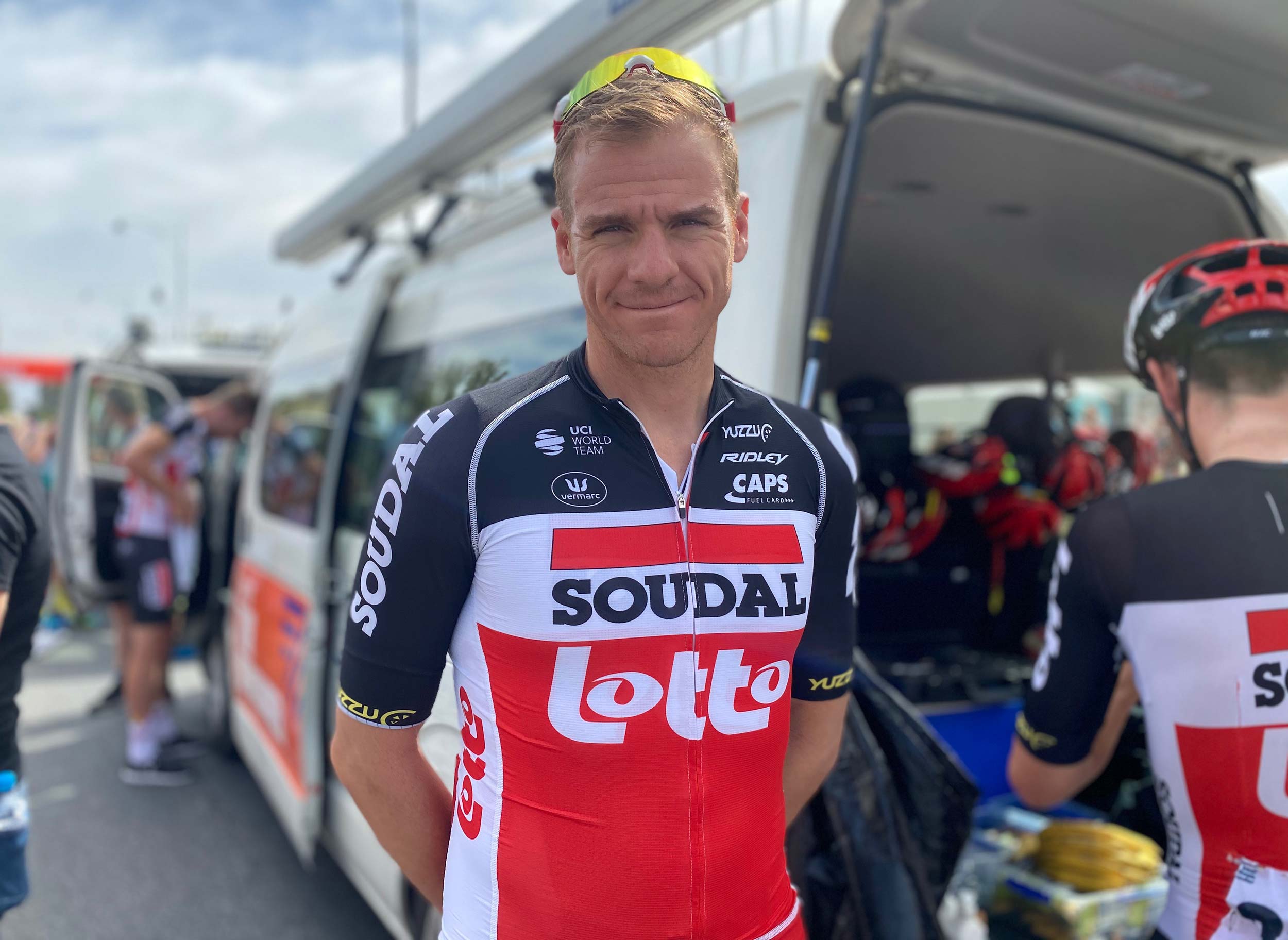 Adam Hansen doesn’t mind experimenting with bike position, equipment, technology. When he was young, he created his own power meter and built an altitude chamber.

Now, as one of the more seasoned veterans in pro cycling, he continues to dabble with different concepts to try and eke out gains when other riders are generally happy to continue with many of cycling’s traditions.

We will expand on some concepts raised during our five-minute chat in the future, but for now, here are a few photos of the bikes used by Adam Hansen and team Aussie team-mate, the current leader of the Tour Down Under, Caleb Ewan.  And you can read the transcript of our discussion on the esky (below)… 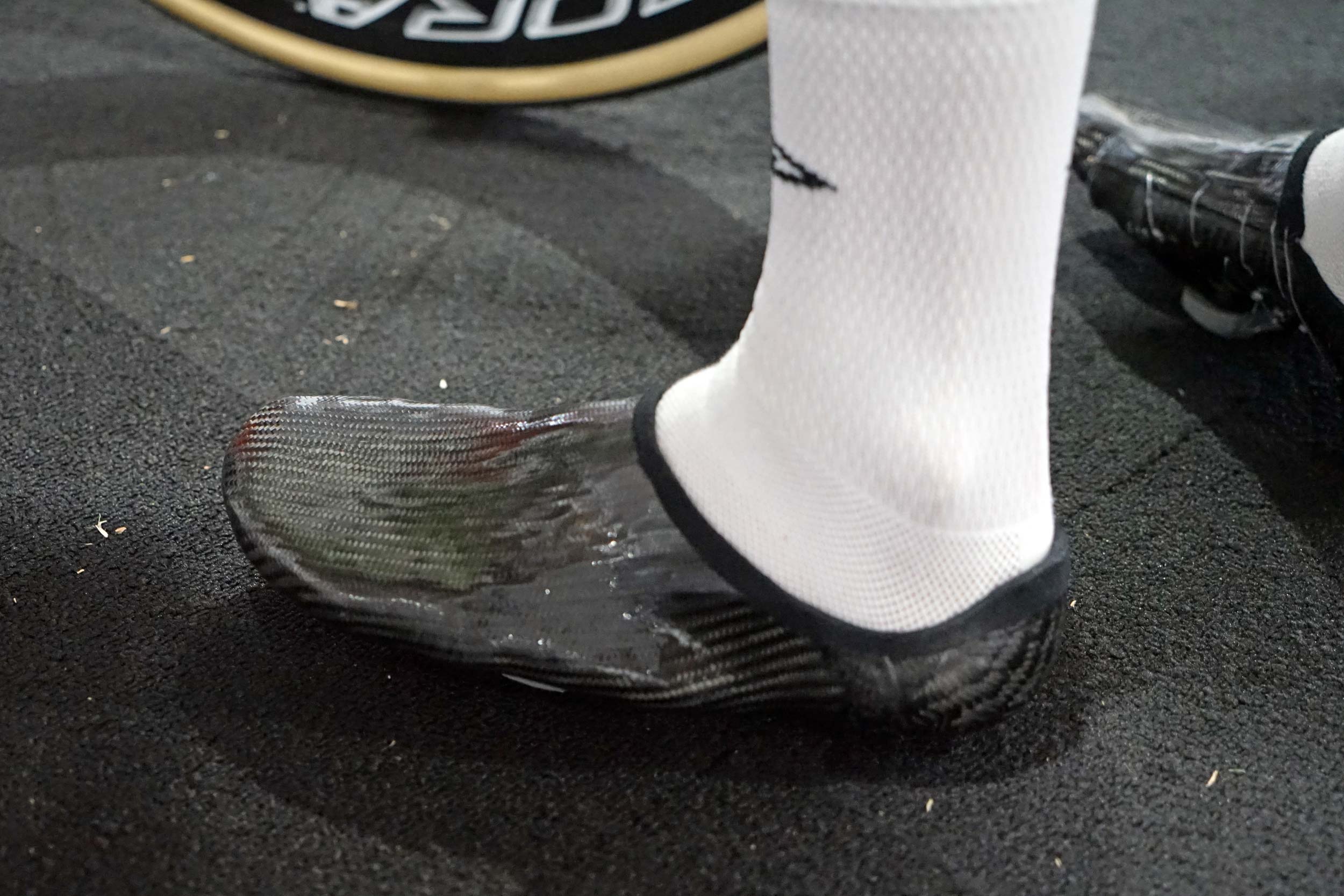 The Hanseeno shoe, custom crafted by Adam Hansen, always attracts attention… he has a Kevlar lacing system to fasten his cleats and reduce weight. “I believe I can get each shoe to a weight of around 55 grams or even less,” he told RIDE in 2017. Apparently they are getting even lighter.

RIDE Media: I’ve got an opportunity to catch up with Adam Hansen. (While sitting on an esky under the blare of a loudspeaker 30 minutes before the start of stage two of the 2020 Tour Down Under, otherwise you’d also find the audio file here to listen to.)

He is one of the more interesting technical innovators in the pro peloton. We know about your shoes and your quirky cleats and low stem and forward reaching seatpost and long cranks and narrow handlebars… what am I missing?

Adam Hansen (Lotto Soudal):“I think you covered quite a lot there.

“That’s pretty much all you can do with everything one-the-bike related. We’re now trying to make our radios lighter, and things like that.

“I dismantled our team’s radio and I made a lighter case and made it thinner, so that saved about 45 grams or something.

“I’ve been trying to work out a way that I can have the radio embedded inside the bike and then just have a BlueTooth earpiece, that’d be ideal. 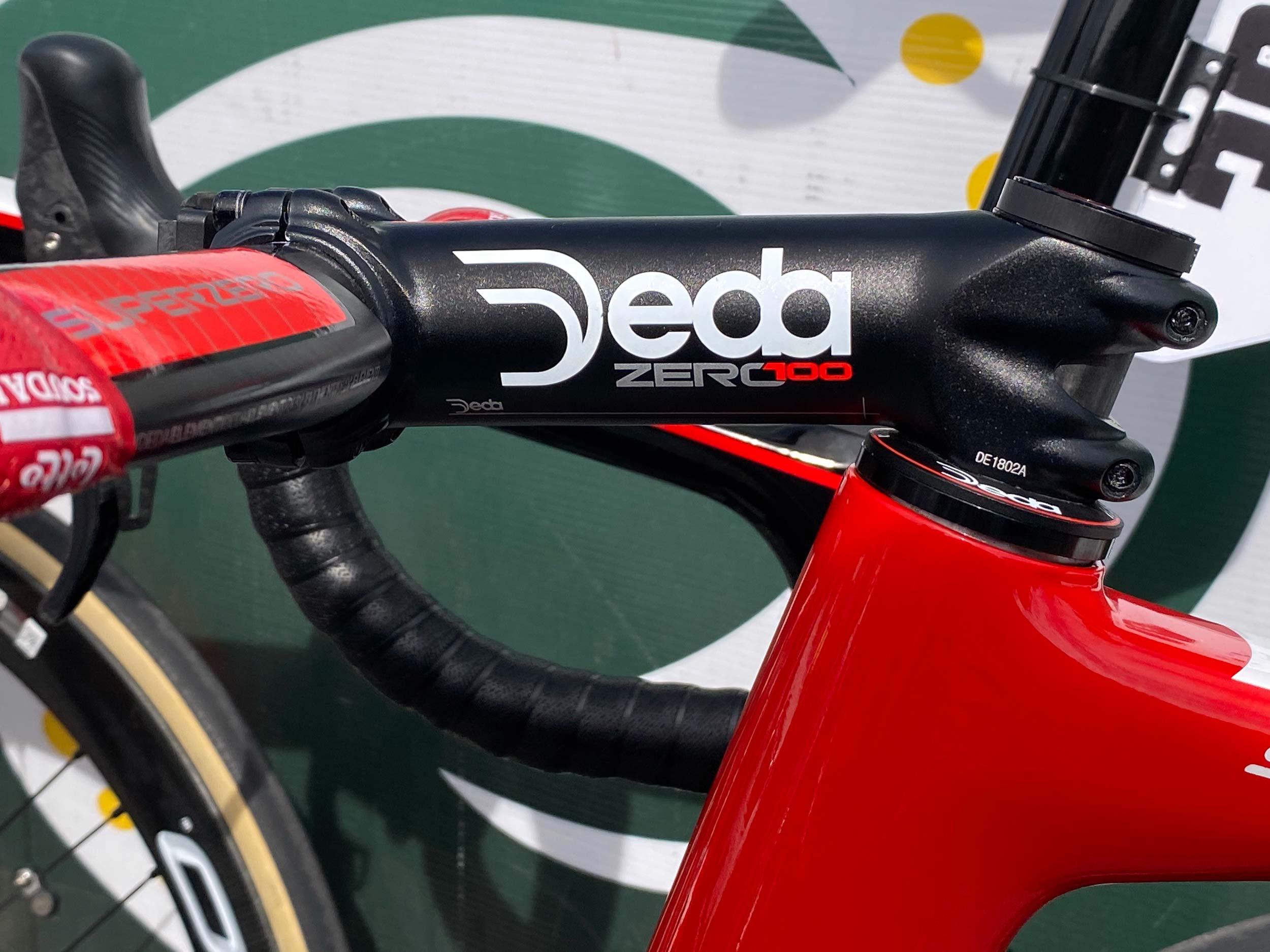 Hansen likes his stem just-so… long and low! And, he hopes, more aero in the future.

“I’m trying to make a head unit, or a more aerodynamic mount, for my cycle computer. Instead of it being so exposed, I’d like it a bit more flush with the handlebars. I should have something like that finished, hopefully, in March.

“What else can I tell you? That’s probably pretty much everything on the bike.” 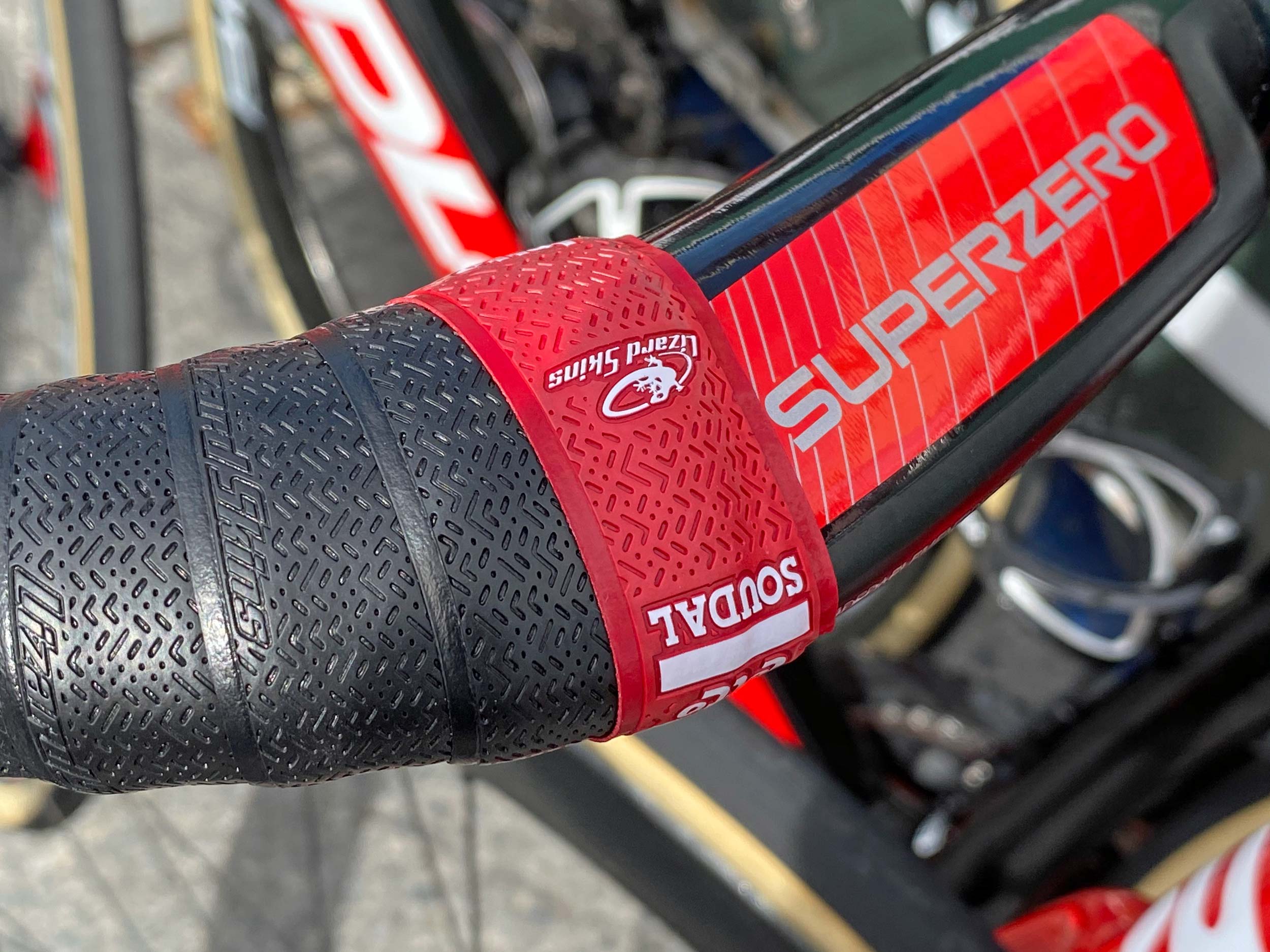 RIDE Media: You’ve talked about radios, so I’ll just ask a few questions about that. I was in the car with UAE Team Emirates for stage one with Allan Peiper. When he speaks to the riders, I understand that what they hear is okay. But when they speak to him it just sounds like a lot of static. Is there ever going to be a time when something like bone-conducting technology is going to be used for race radios instead of stuffing something in your ear?

Adam Hansen: “The bone-conducting technology is more for listening and the biggest problem is the radios in the car are far more powerful than what we have. So, when the person in the car is talking to us, it’s almost possible to get a clear message to riders who are in a breakaway (ie. further away than just from the convoy following the peloton). But if a rider is in a breakaway and he talks back to the DS, it may be picked up but there’s no way a rider back in the bunch will understand.

“It depends on the distance, of course.

“We have far less range.

“The bone-conducting technology is pretty cool but, again, it’s only for listening.

“Also, when the sports directors are in the car, the windows are up… while the riders are outside and there’s a lot of wind and our microphones are underneath our jersey and a lot of riders don’t get their mouths close to the microphone.

“But there is a microphone that does connect to your throat; Michael Rogers was testing about five years ago. But the problem with this is that it’s pretty tight around your throat.

“A lot of security guards use this system and I can understand that, in normal situations, it could be useful. But riding a bike… you don’t really want to be too constrained in that part of your body. It’s just not practical to put something around your neck.” 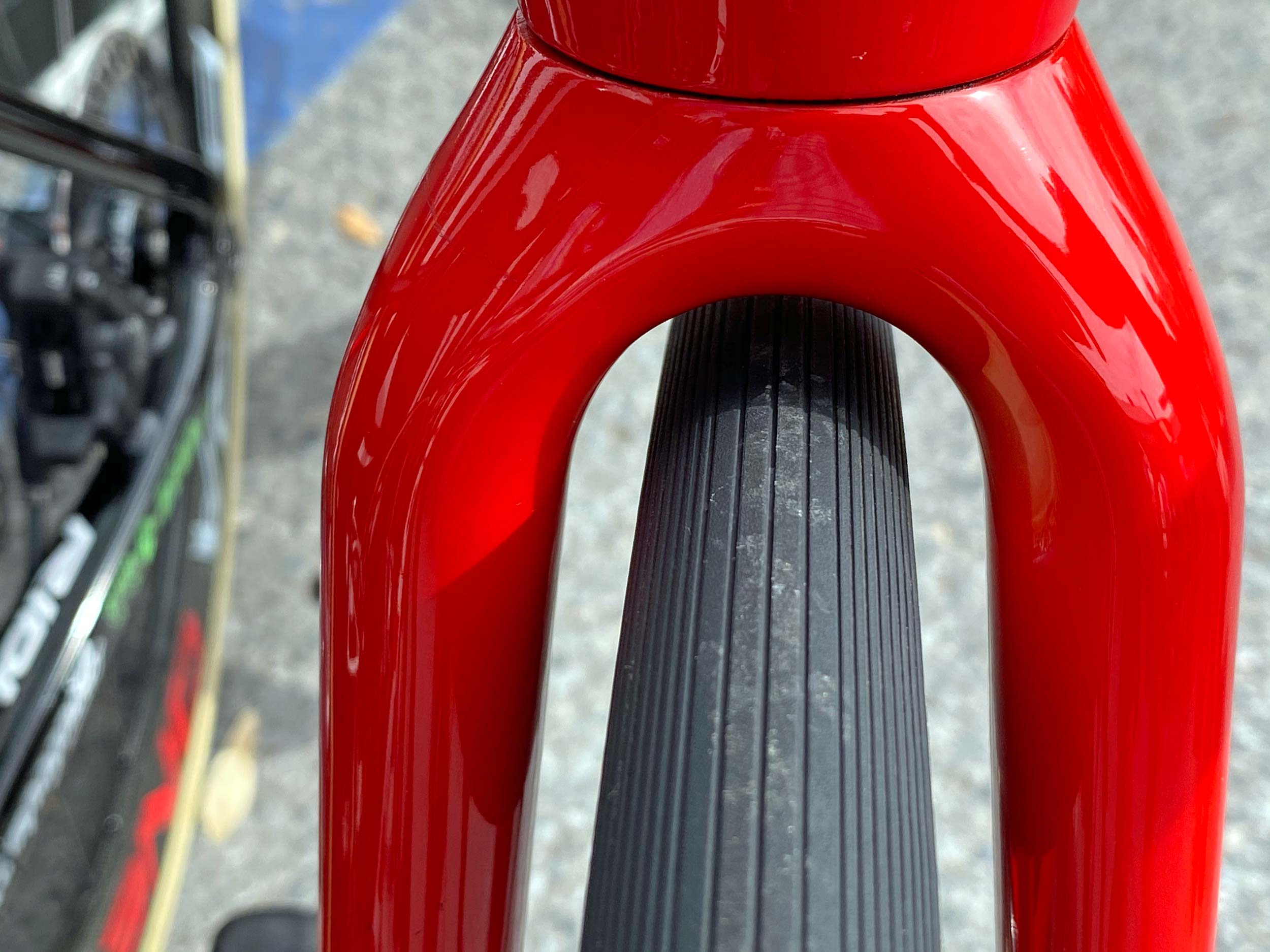 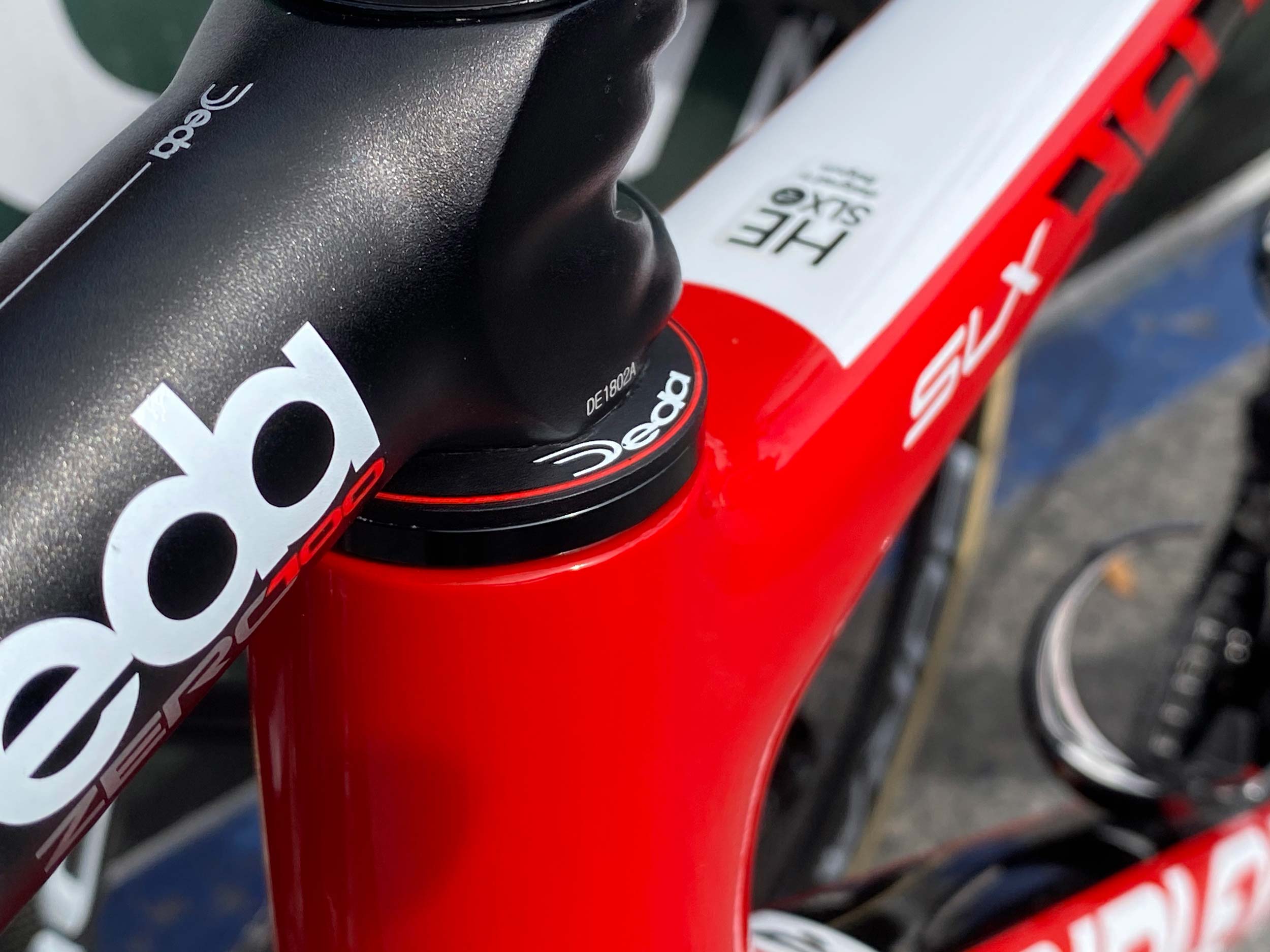 RIDE Media: I talked early this week with Steven, your mechanic, about disc brake use. It’s obviously a very big theme for the season. Many teams are adopting this in 2020, some – like your team – would like to have it for all bikes all year… there’s conflicting opinion out there about them being good to maintain or not, and a lot of other talking points. Have you got an updated perspective on disc brakes?

Adam Hansen: “Yes. So, in terms of maintenance, I think they’re ideal. I’ve been training with disc brakes for over two years and there’s been no problem. I think it’s perfect.

“I’ve never had to adjust the brake pads at all, so in that sense, they’ve been good.

“They are really consistent.

“In racing, they’re heavier. That’s the only concern I have. I prefer to have a lighter bike. 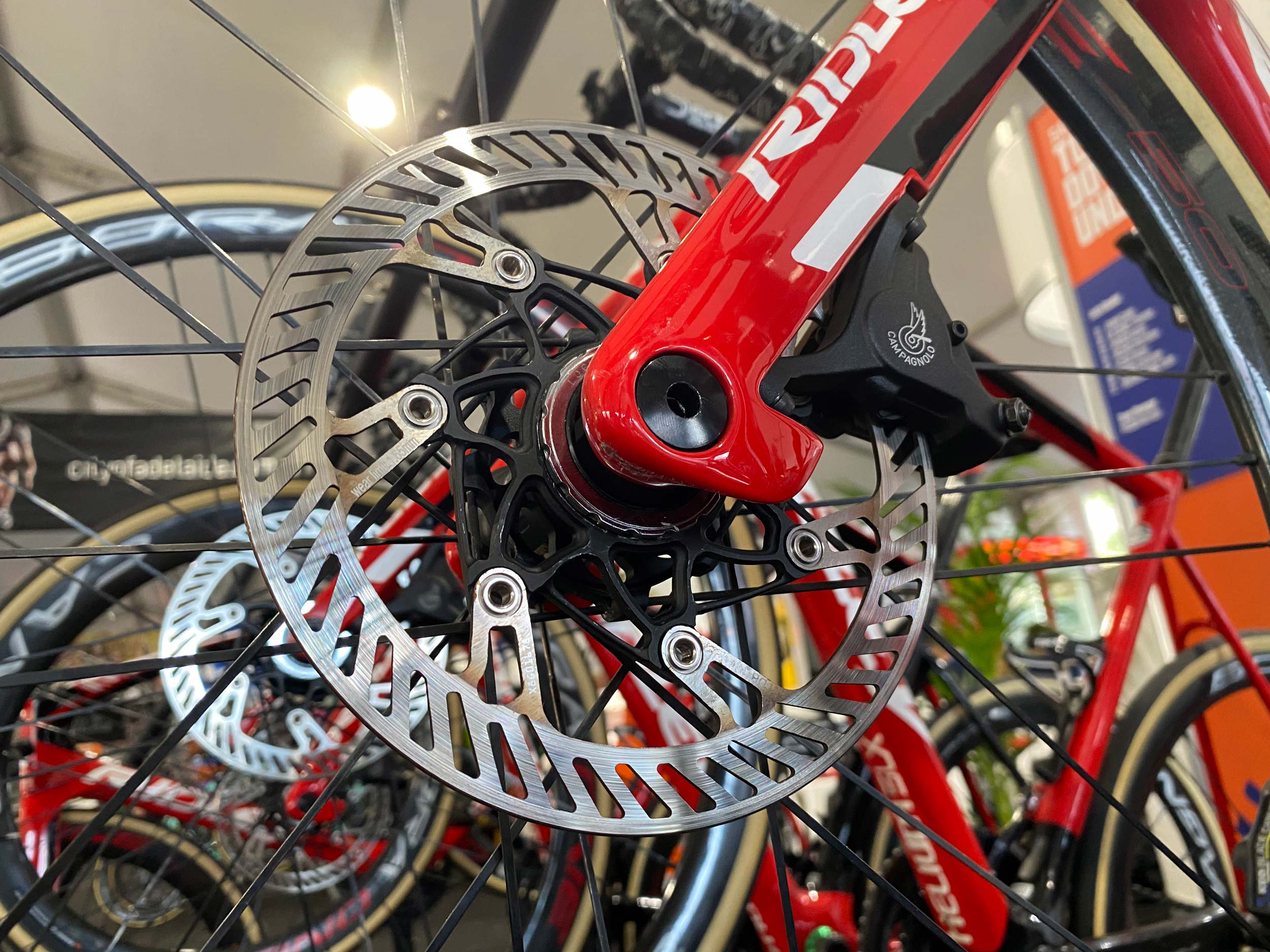 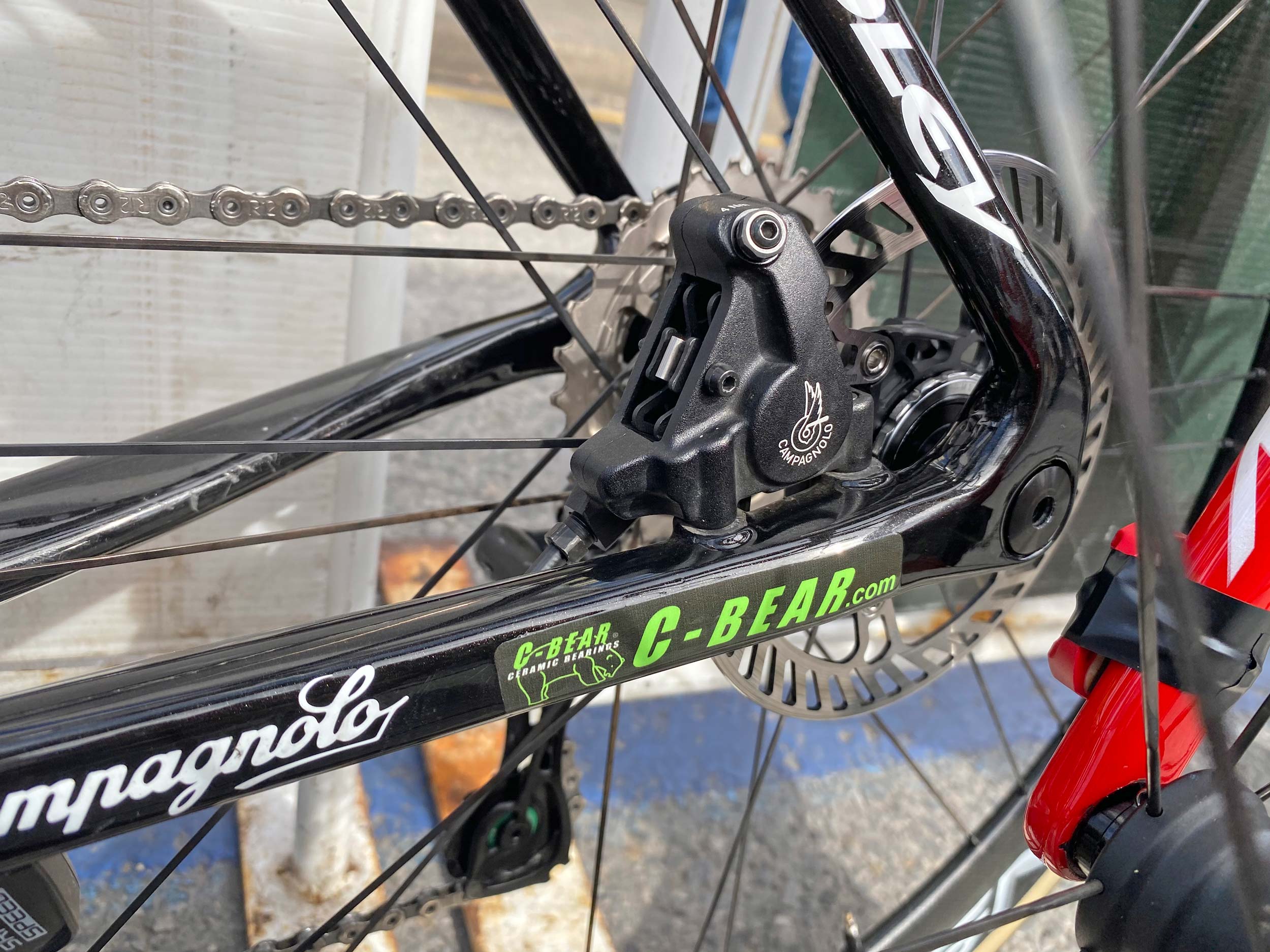 It wasn’t certain that Caleb Ewan would also switch to disc brakes at the TDU. The team had his 2019 Tour de France bike – with ‘traditional’ brakes – also available… but the sprinter is racing with discs now.

“We were pretty… let’s say ‘spoiled’ because Campagnolo actually has a patent on their rim brake surface and their brake blocks – and they actually have amazing stopping power with the calliper brakes.

“So, in comparison to disc brakes it’s the same in the dry. In the wet it’s different but in the dry, the rim brakes are as good.” 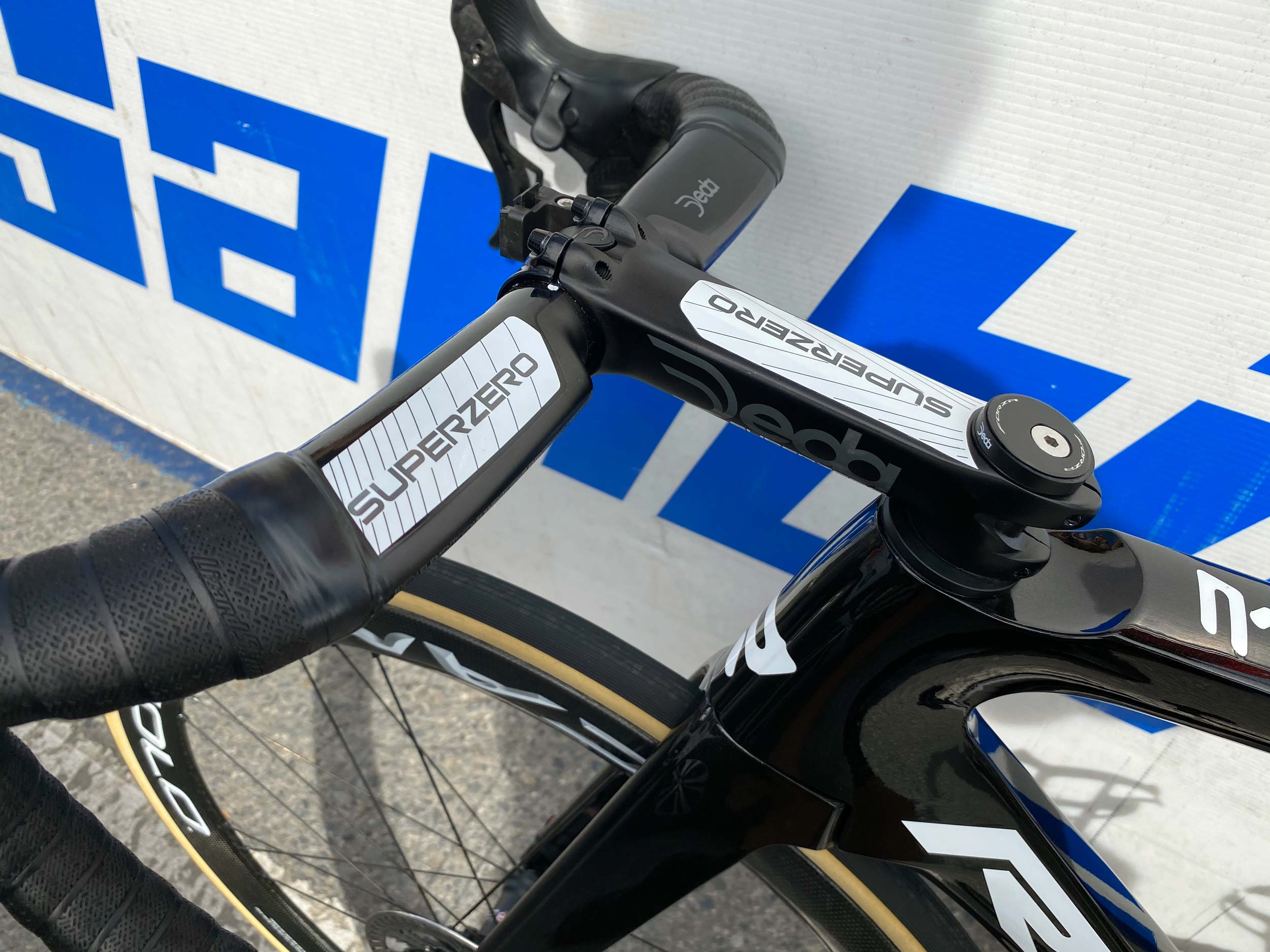 Caleb Ewan also likes a long stem on his Ridley bike. The sprinter uses a Noah frame (black for the leader) and, in 2020, also disc brakes.

RIDE Media: Often, if you ask a team mechanic or a bike rider about their equipment, they’re going to have to give the politically-correct/spin line. When it comes to you, I feel like you have the opportunity to try and introduce concepts to the team; we can use the narrow handlebars as an example – a lot of people followed your lead all those years ago. Are we going to hear people be a little more open with their opinions about equipment that they use, in a quest to try and make it better?

Adam Hansen: “Yeah. Well. Definitely. I definitely saw that when I was trying different things. For example, it was nicknamed ‘Twin Towers’ with my time trial position when I was national champion (2008).

“I had a super-high position and the mechanics didn’t like it, team-mates were saying stuff… ‘Ah, it’s not good!’ And things like that. At the time, I was being mocked but it was a very good position and I rode well with it.

“Now, in today’s time, you see almost everyone having a high position and the [aerobar] arms are up. There’s definitely a new generation of younger people in the sports performance fields in the teams and they have a lot more say.

“One of the biggest problems in cycling has been tradition.

“Tradition has really held the sport back.

“But now a lot of guys are doing new things, trying new things, and it’s just being supported by the younger generation in the management and sports performance side of things.

“Everyone is being a bit more open-minded and willing to test and try new things.” 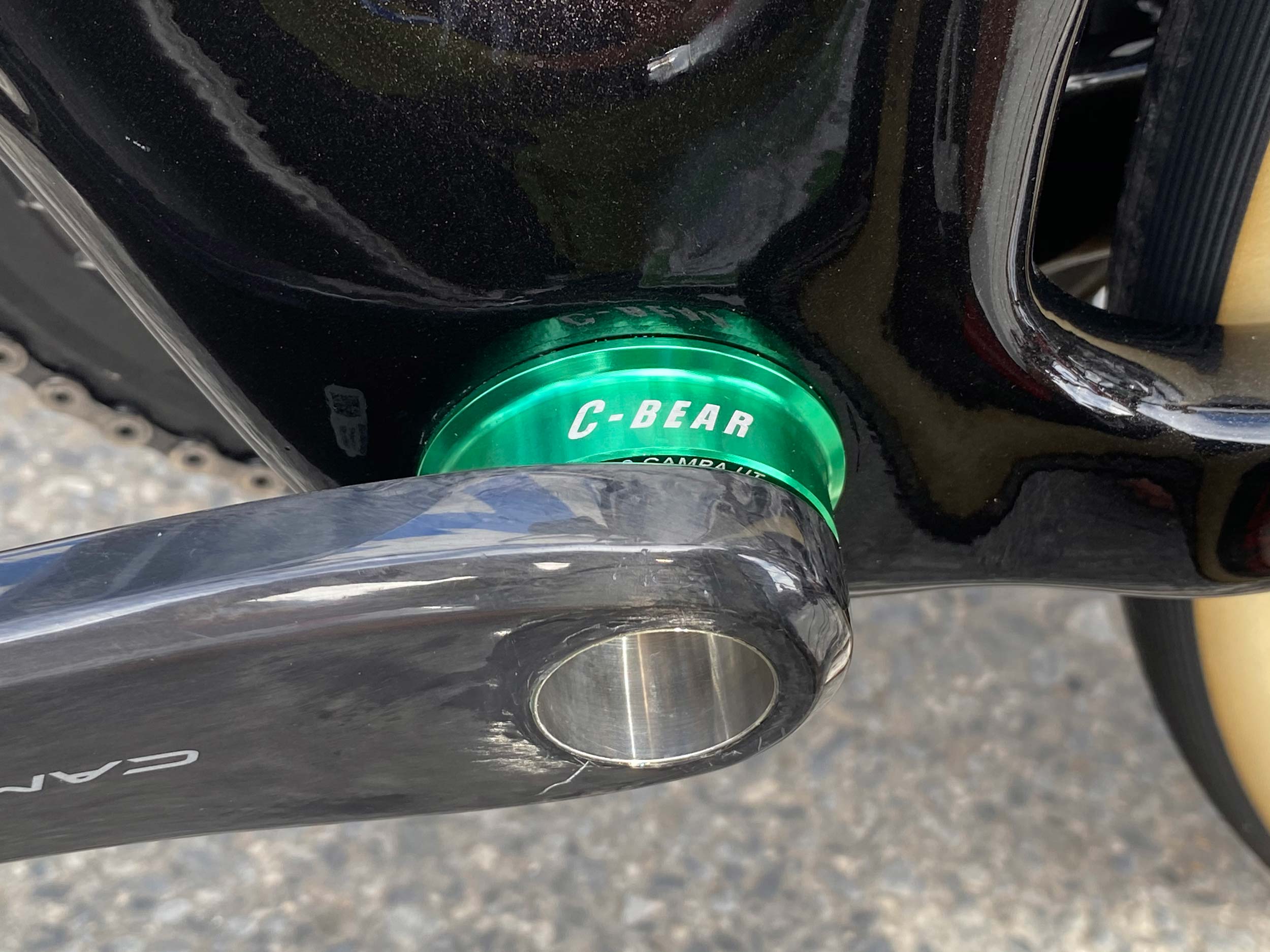