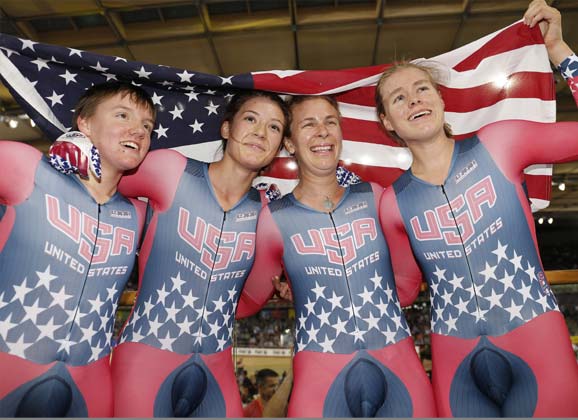 Last year the Australian women set a world record on the way to gold in the team pursuit, this year they didn’t make it to a medal ride… Team USA, meanwhile, created a bit of history with Sarah Hammer adding to her collection of titles from over the years and claiming a first in the team 4,000m event.

Giles Belbin offers his overview of day three of the championships in London. 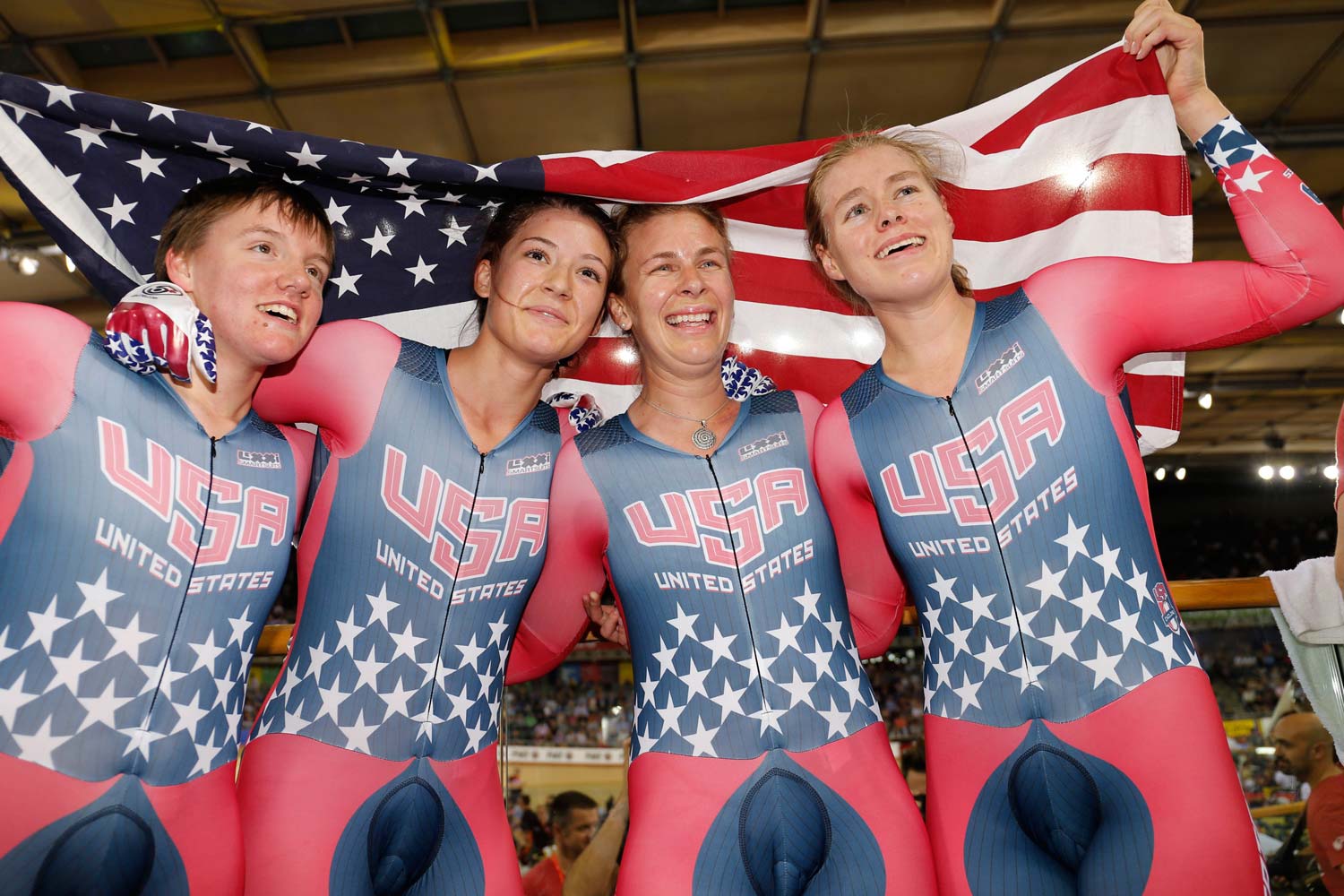 Lee Valley VeloPark, London: Australia’s women missed out on the team pursuit medal races as the USA dominated their round one matchup on day three, posting the second fastest women’s team pursuit time in history.

The USA went on to beat Canada in the final by just under three seconds, in 4:16.802. They have proved to be the most consistent team in London, fully deserving their first team pursuit world title.

“I’ve been waiting my whole career to get a gold medal with the team,” said Sarah Hammer who had previously won seven individual world titles across the individual pursuit and omnium.

“What better place to do it. It’s the first medal for the United States in women’s or men’s team pursuit, so it’s a very special night for us.

“This is a special group. You don’t do what we did tonight without a special group. We are a team in the whole sense of the word, and I think that showed in all three of our rides. It’s very special.” 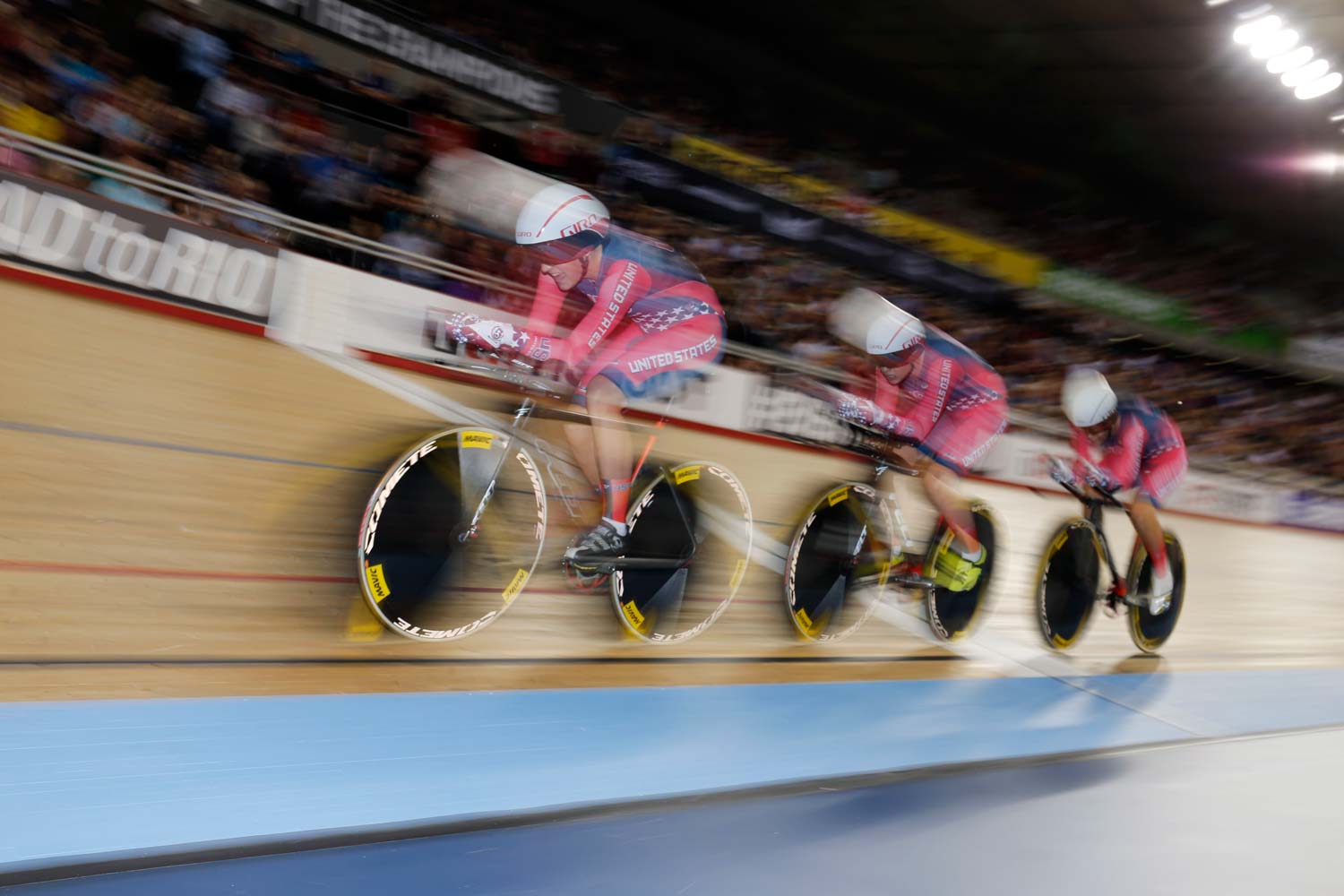 While the Australian quartet of Annette Edmondson, Georgia Baker, Ashlee Ankudinoff and Amy Cure took over two seconds off their qualification time, their 4:18.559 first round ride was not enough to see them into the bronze medal race.

Instead the race for bronze was between Great Britain and New Zealand. The British team was almost unrecognisable to the one that fell apart during qualification. They looked smooth and controlled and their round one time of 4:16.350 was a British record, second only on the day to the Americans. The British four posted 4:16.540 in the race for bronze, easily distancing New Zealand.

“We’ve had a really good winter of training in preparation for these championships,” Jo Rowsell-Shand said afterwards.

“In qualifying we went out to try to do the fastest qualification but this event is so close at the top that we went a bit too hard and obviously split in the last kilometre. But we’re here to push the boundaries. We could have done a conservative ride and qualified second but we went out looking to top the qualification and it didn’t work out.

“But we’ve come back today and shown the sorts of times we can ride and come away with a bronze that I think feels nicer than getting a silver.”

Australia meanwhile were forced into a battle for fifth place against Italy, catching the Italians with around two laps to go.

“We saved our best ride until last,” said Ashlee Ankudinoff. “Sometimes that’s the way it goes. We didn’t have a good ride the first ride, so we went back to a team meeting and knew that we had some improvements to make.

“Certainly we’ve had our ups and downs in the lead up, we’re missing Mel [Hoskins] here but Georgia Baker has really stepped up. She’s really earned her spot and she’s a real great strength and brings some great qualities to the team. We can’t be too disappointed. We’ve got Mel still to come into the team, and also Nettie being hit by a car, that wasn’t ideal for her. We’re heading into Rio with positive thoughts.”

“I’ve no doubt,” Sutton said. “We tried a few different things coming in here and we’ll go back and reassess, we’ll look at all the data, we’ll look at the tape. There’s no question we were expecting bigger things here but it’s not to be and you just have to move on. These athletes are rock solid, they’re a bit like a family, and they’ll kill for each other so I’m really pleased with that aspect. That is going to help us go forward.”

With five teams recording sub 4:18s over the course of the championships, the strength and depth of women’s team pursuiting has never been stronger.

“It’s great,” said Ankudinoff. “It’s the first time that a Great Britain or Australian team hasn’t won the world championship. America really brought it to us and it’s great heading into Rio. The depth of the team pursuit is really exciting and it’s just going to keep us on our toes. We’re going to go back to what we do best – that’s train hard and have our heads down, bums up and we’ll be full strength come Rio.”

“I’ve said this many times, we can’t control what [the other teams] are doing. We can only control what we do and I believe in this team, this bunch of ladies that I’ve got and we’ve got time to work on things which is important.

“A lot depends on the track and the surface but I reckon it will definitely be a world record required to win [in Rio]. I’ve no doubt [they can do it]. I honestly think they can. Georgie Baker stepped up, Bec Wiasak is a bit tired from the IP and then you bring Mel back…Nettie at 100%…Amy Cure…they’re tough characters those girls.”

There was glory for the host nation in the 40km points race when Britain’s Jon Dibben took gold in a dramatic finale, storming the final lap and taking the final sprint to claim the rainbow jersey. Dibben ended the race tied on 48 points with Austria’s Andreas Graf but took gold as he won the final sprint.

“Coming into that last sprint I knew what I had to do,” Dibben said. “The French guy [Benjamin Thomas] gave everyone a nice counter chase. I knew exactly where I had to get to. Graf was on my wheel I knew I had to beat him. I was pretty confident in my sprint, I just knew I had to catch the French guy.

“It’s massive [for me]. I mean you have Olympic gold and then the world champs. It’s far, far [away] the biggest thing I’ve ever won.”

Elsewhere Italy’s Filippo Ganna was too good for Germany’s Domenic Weinstein in the fight for individual pursuit honours, winning by just over two seconds in 4:16.141. The bronze medal went to Britain’s Andy Tennant who edged out team mate Owain Doull by just 0.175 seconds in a tightly contested race.

“That’s the icing on the cake for me,” Tennant said. “To come away with an individual bronze medal, if you’d asked me three weeks ago if I’d get this, I’d have been betting against myself that’s for certain.”

In the day’s first medal event, Russia’s Anastasiia Voinova took her second rainbow jersey of the championships, adding the 500m time trial title to the team sprint gold she took on day one.

Voinova, the defending champion, won ahead of Hong Kong’s Lee Wai Sze by 0.777 seconds, her time of 32.959 was the only sub 33 second time. Elis Ligtlee of the Netherlands took bronze.

Matthew Glaetzer will ride against France’s Gregory Bauge in the quarterfinals of the men’s sprint. Glaetzer posted the fastest time in qualifying – 9.766 seconds, just 0.001 seconds ahead of Britain’s Jason Kenny and the Netherlands’ Jeffrey Hoogland. Glaetzer then progressed through the remaining rounds to book his spot in the quarters.

Bauge, the four-time world champion had to go through the repechages to qualify. 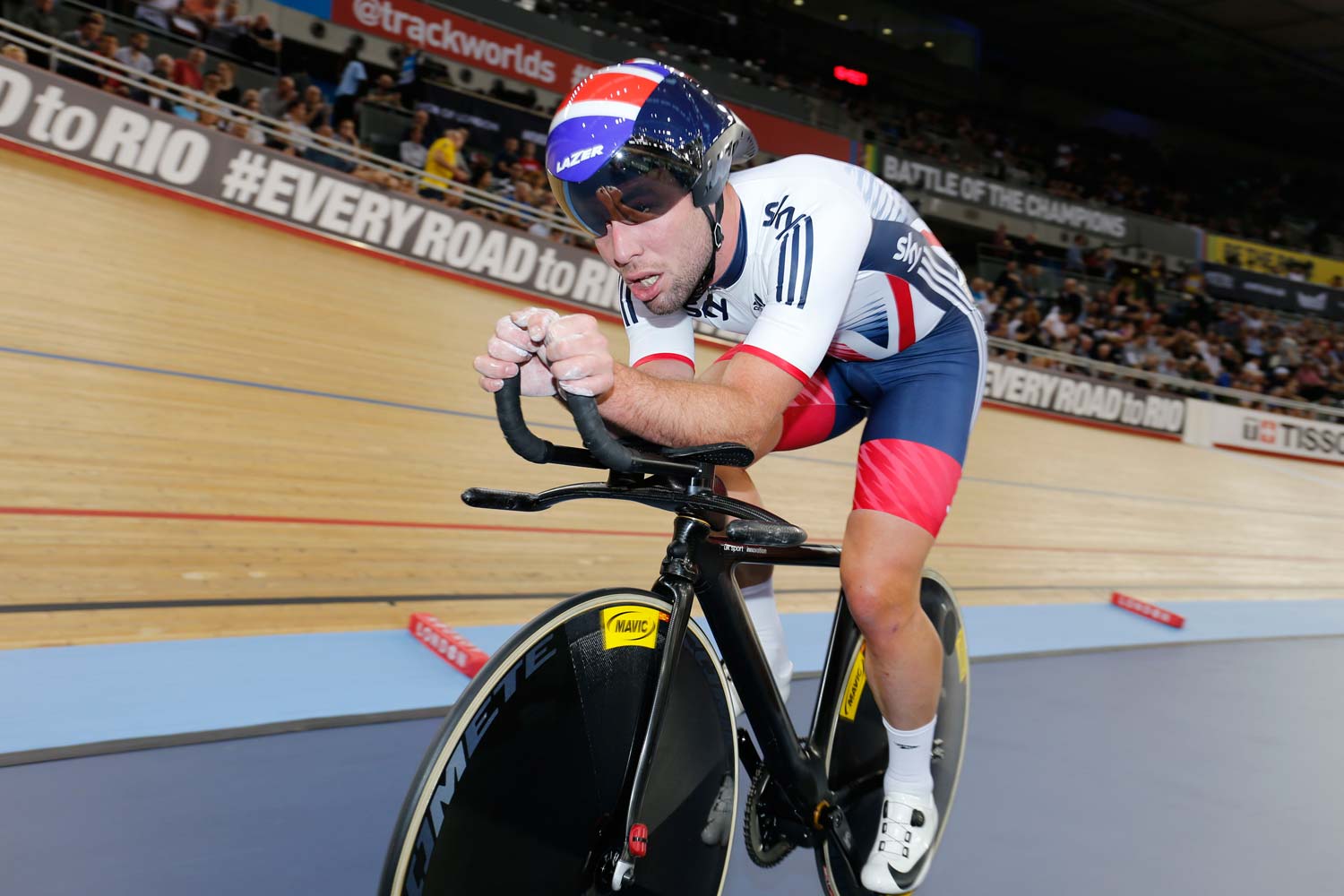 After three days of competition the medal table is headed by Great Britain, with two golds, one silver and three bronzes. Australia lie third with three medals so far.