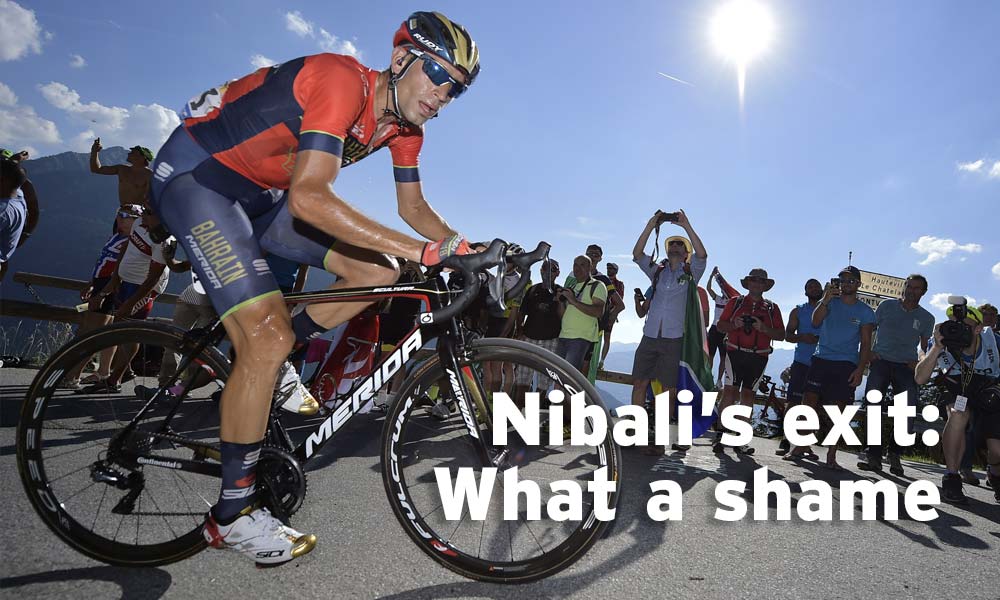 Vincenzo’s early exit: a great shame for the Tour

Vincenzo Nibali was the only rider in the 2018 Tour peloton other than Chris Froome to have won the yellow jersey. He’s now out of the race, and it’s a great shame.

By now you probably know the news and have seen the reaction from the media and the rider and it’s difficult not to feel saddened by the departure of Vincenzo Nibali from the 2018 Tour de France. The former champion is a class act and, alas, the incident that ended his campaign for a second title – while perhaps born out of fun on a day when bike racing was surrounded by festivities – is so ridiculous.

For a spectator to cause any rider to crash is upsetting. For them to do so in the closing kilometres of a climb like Alpe d’Huez on a day when a rider of Nibali’s reputation was challenging for the win, is most upsetting.

The announcement of the fracture was done in style and humility. Even in another language, you get gist quickly.

“Hello guys,” he writes, “back at the hotel, unfortunately the result of the medical report is not good. I was confirmed the fracture to the vertebra. Tomorrow I will return home for a period of recovery. Thank you for all your affection shown to me! See you next time.”

And just like that it ends. It was late on Thursday in France when the news was confirmed. In time we’ll absorb it but my call to the family on Friday morning will include the obvious question from my kids: why?

In 2014, when my youngest was just four – and just starting to understand what cycling was all about, why dad was always away “working at the Tour” in July – there was one name that he learned well. “Vincenzo Nibali.” He repeated it often when asked who his favourite rider was.

That was, of course, the year the Sicilian was dominant in the Tour. He won stages in England, the Vosges, the Alps, and the Pyrenees. He took yellow in Paris and he survived the mayhem of the Tour. Who is your favourite…? In 2014, the answer was often the same. 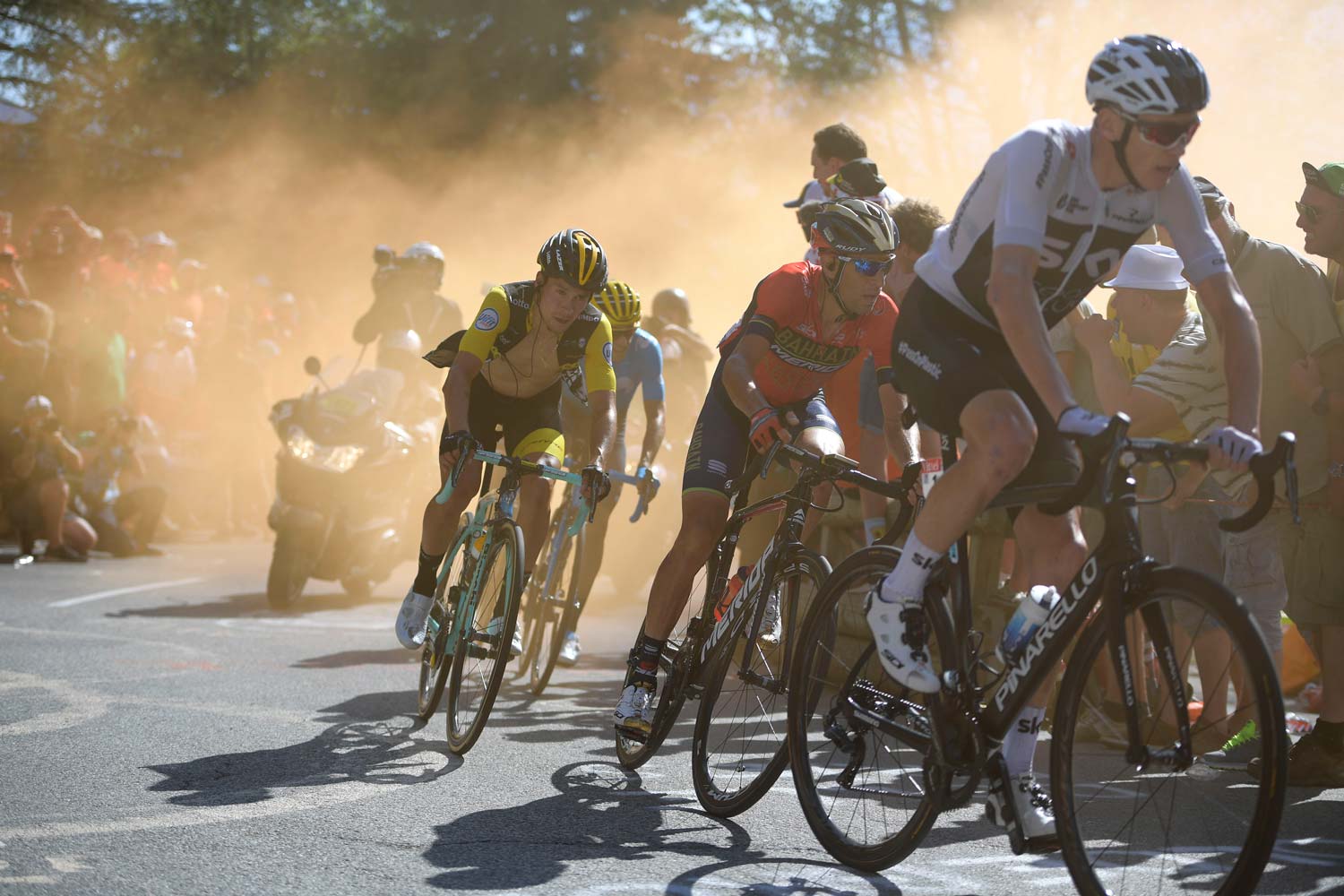 Sitting pretty on the wheel of Froome, Nibali poised to strike on Alpe d’Huez (above).

Success can bring popularity or it can be polarising. In the era of Team Sky’s domination, there was one challenger determined and gifted – and lucky – enough to overcome the ‘Blue Line’. The year Chris Froome crashed out, the yellow jersey went to an Italian… and followers of cycling know the story well.

The memories of the 2014 Tour spring to mind when waking on Friday, before the 13th stage. All signs pointed towards there still being something of a challenge to the domination of Team Sky; even with Geraint Thomas and Froome sitting one-two on GC after 12 stages, there were guys like Nibali who could never be written off.

Ultimately, however, he’s gone because of a bloke dressed as a smurf who wanted to get close to the action on a day when sport mixed with frivolity.

Fractured vertebra.
First instinct?
Get up and race to the finish..!
Vincenzo, you’re amazing!@Bahrain_Merida #tdf2018 https://t.co/XItvLe2vdr

Accidents happen and we understand that. Richie Porte is another example of a rider who could have taken the race to G and Froomey and exactly how he fell is something no one seems to fully understand. Some say it could have been that he collided with a spectator but not even the rider himself is certain of that. One second he’s racing, the next he’s not. DNF.

It wasn’t quite like that for Vincenzo Nibali. In the heat of the moment, he only thought of one thing: get back on! Get to the finish. Assess the damage later.

Five years ago, on day one of the Tour, Geraint Thomas fractured his pelvis in a crash. He got up. He kept racing. He reached Paris. His leader was the champion of the 100th Tour.

G’s track cycling days were behind him by then, he was a road man after the Olympics in 2012. He vowed that he’d follow the lead of another former pursuiter and turn himself into a Tour de France contender. That’s where he’s at now, on the day of stage 13 of Le Tour 2018.

Not only is G a dual stage winner and the rider with a significant leading margin in the general classification, he is part of the team that knows how to win the Tour de France… and perhaps the only thing he’s yet to overcome is the question of leadership at Team Sky.

Slowly, it seems, the management is coming around to the idea of supporting the Welshman rather than the defending champion – and we wait to see what unfolds from that predicament. But right now, I’m writing this before switching to FaceTime to talk to my kids. Only yesterday morning, my eldest, now 13 told me, “Vincenzo is going to do win on Alpe d’Huez.”

He was never quite as excited about the Sicilian as his younger brother but, he told me, “it all just seems to add up – he’s ready”.

That was an appraisal of a child watching from afar, but many would concur with the sentiment; those watching on TV, rivals who have seen the determination of Nibali, commentators who understand that his strengths are many and that there always seems to be an element of surprise lurking when Vincenzo is in form.

His Australian team-mate certainly believed it was possible for Vincenzo Nibali to win again. On the day the Tour arrived in the Alps, Heinrich Haussler spoke about what he saw on the mountain roads on the rest day. As he spoke, he raised his eyebrows and suggested: The Moment Has Arrived. He shook his head and made that ‘phoarrrr’ sound that someone makes when they are impressed but also humbled by the contrast to their own capabilities.

Like many, Haussler was looking forward to seeing what Nibali could do at the Tour in 2018. He believed victory was possible.

“He’s super fresh,” said Haussler about Nibali in Annecy before the start of stage 10. “Even yesterday on the rest day in training, you know, you’re sitting on the wheel and suffering like a dog and he’s just got his hands on the top, easy, just pedalling away…

“He’s looking very good. It’s good that we got through the nine days without really losing any time except for the TTT which, from my side, was already a little bit expected. Of course we would have liked to have done a little bit better but we got through with no crashes, no flat tyres… so it’s been pretty much perfect up until now.”

That was then. This is now. Vincenzo has gone home “for a period of recovery”.

Get well soon, it’s a shame to see you exit so early. 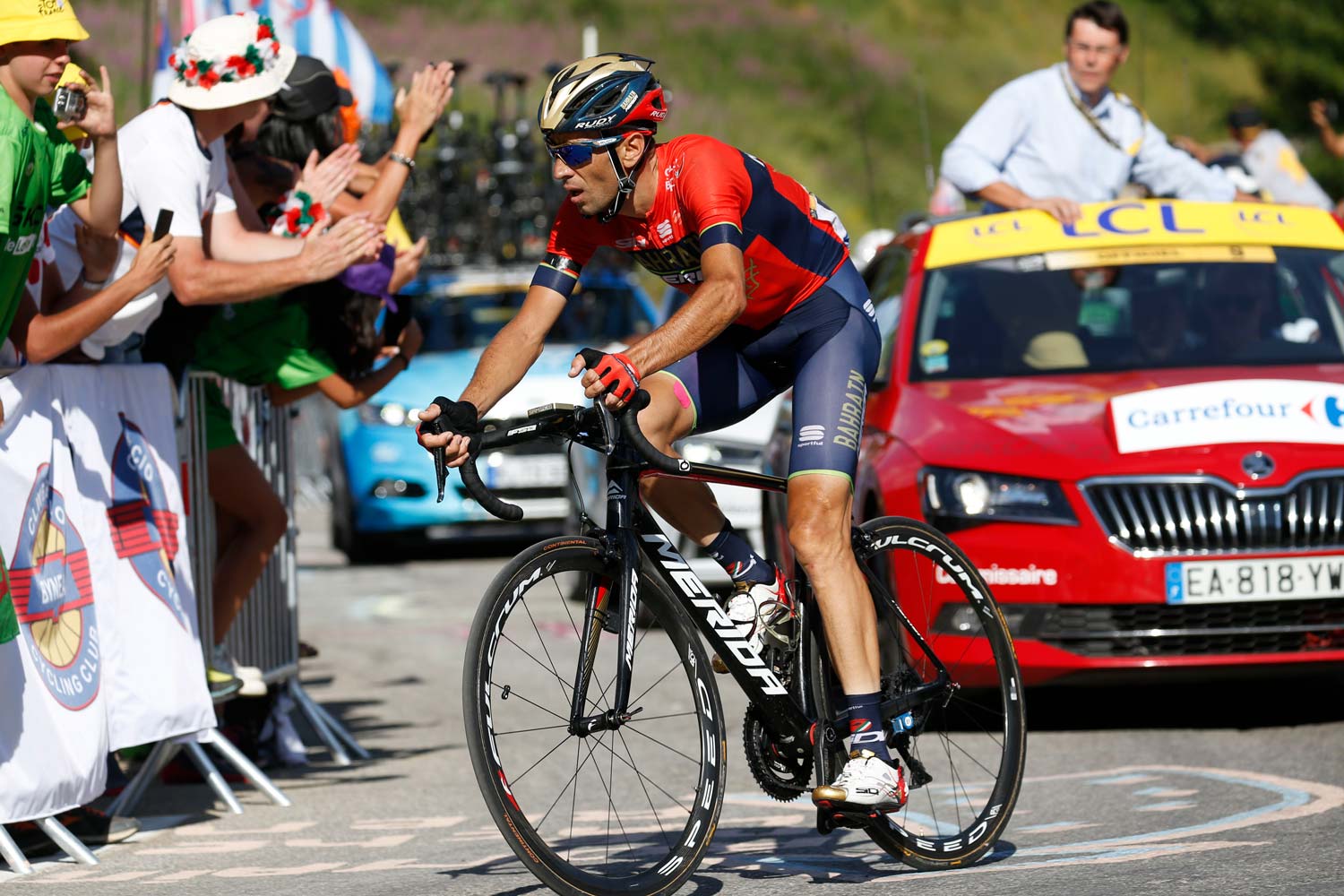 A premiere cycling team knows it’s critical to choose the right riders for the right race—one for hills, one for sprints, one for endurance. At Bennelong Funds Management, we’ve curated a team of boutique fund managers who specialise in everything from Australian equities to global real estate, and outperform in different market conditions. That kind of diversification means we may have a fund for you—wherever you are in your journey.