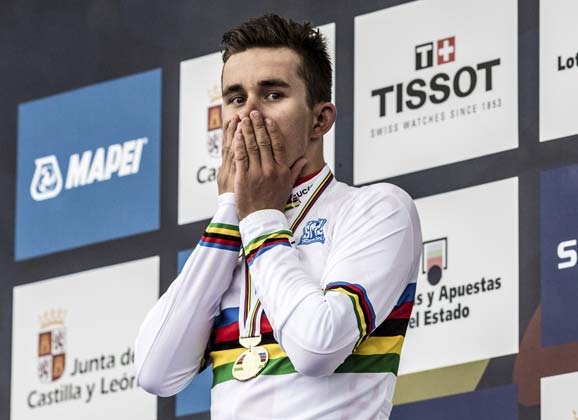 A championship for the young road racers. Ponferrada, Spain: where the rain fell and a 24-year-old Polish sped ahead on the final descent and onward to victory on the final day of the 2014 titles…

Michal Kwiatkowski is the champion of 2014. He’s promised plenty in recent seasons, winning along the way and delivering on his potential. “In 2014,” he told Pawel Gadzala for the ‘Kwiatek’ profile in RIDE #62, “I need to change the racing program, to be able to prepare for the most important events.” He’s done that.

Ahead of a long list of favoured riders, ‘Flowerman’ crossed the finish line with an advantage of just one second. The runner-up and bronze medallist, Simon Gerrans and Alejandro Valverde, were the same two who Kwiatek was battling with in April when he was chasing a Classic victory. In Liège-Bastogne-Liège, the Australian champion got the advantage and the title of the Belgian race’s 100th edition. In Ponferrada it was Poland in first, Australia in second and Spain in third.

Click the photo below to begin the final slideshow of the world championships of 2014.