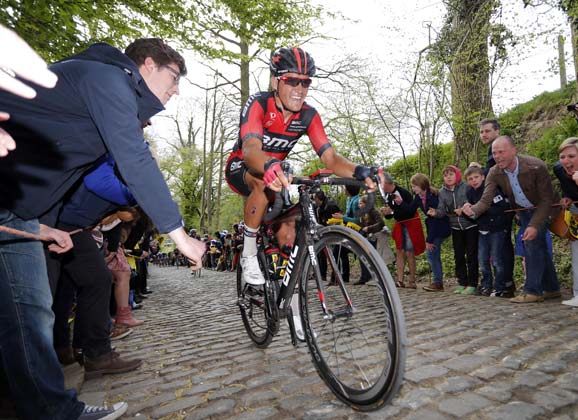 Allan Peiper on BMC at Paris-Roubaix

As he drove from the BMC team’s hotel to the roads that will be used for Paris-Roubaix this Sunday, Allan Peiper took a call from RIDE’s publisher Rob Arnold. Last Sunday, Greg Van Avermaet was the runner-up in the Ronde van Vlaanderen. We started this quick interview by asking if the Belgian leader for the cobbled Classics is up to the challenge of going on better in the ‘Hell of the North’…

Here is a transcript of the discussion… 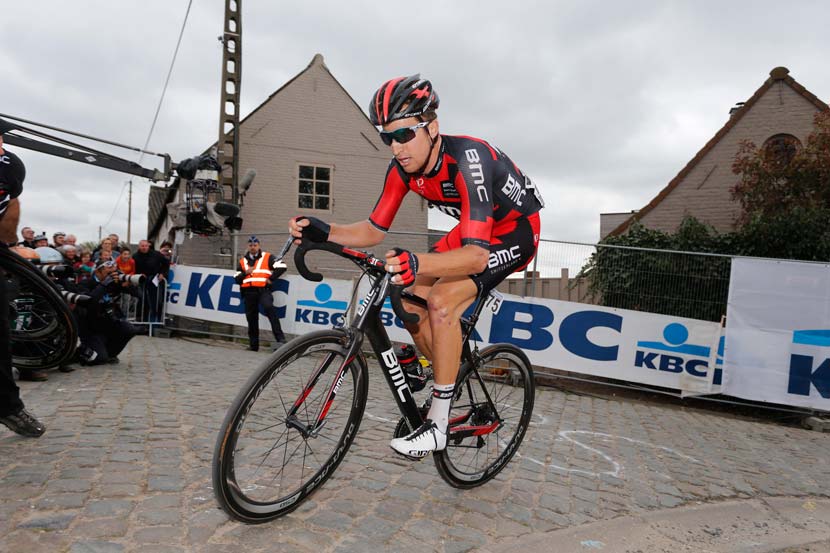 RIDE: Sunday last week was a big day for BMC. We saw an incredible performance from Greg Van Avermaet. Before the race, Taylor Phinney said that it was going to be Greg’s day is the next Sunday going to be Taylor’s day to lead?

Allan Peiper: “Well, what we tried to do in the Classics season is designate a leader for the team – and not just in the Classics but actually right throughout the season so that we’re not getting confused with our tactics and we can clearly have a plan of attack. Greg has been our leader since the Omloop Het Nieuwsblad where he was second.

“Greg will be our leader for Paris-Roubaix although the course is better than Flanders for Phinney and Thor Hushovd – they’ll have a role that makes them a little bit protected but Greg will still be the leader for Sunday.”

Can you explain how the boys pulled up after the Tour of Flanders?

“They came out of it really good. Everyone was really excited about the team effort and the way they rode together. We got a lot of positive response from the cycling world which was really good for the morale of the team.

“Klaas Lodewyk crashed on the descent of the Paterberg; he got hit from behind by Stijn Devolder and actually popped his shoulder out of its joint. He was to be riding on Sunday but he’s out for a few weeks while he recovers from the crash. But everybody else was fine.

“I think the positive momentum they’ve got out of the way the team rode in Flanders is really going to be something that they’ll use on Sunday in Roubaix.” 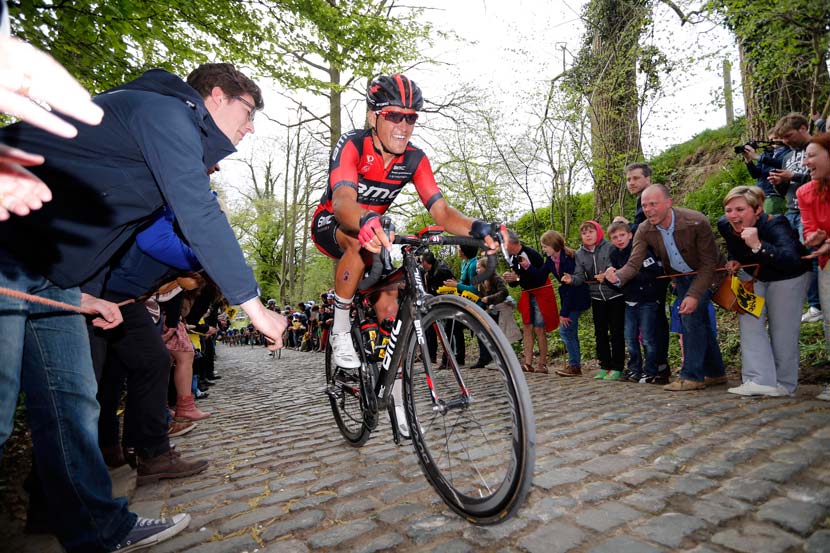 The weather plays a huge part in Paris-Roubaix and the forecast is that it’s going to be clear in the north of France. Is that how it looks from where you are?

“Yeah, it is looking like that. There was meant to be some light showers today [Friday] but at the moment that doesn’t look like happening. The forecast is for a 10 per cent chance of a shower but I don’t think there’ll be any rain until after Sunday.

“I was on the cobbles on Tuesday and only one section had some mud on it, section 17 [Wallers to Hélesmes] but otherwise there was no water anywhere. So I think it’ll be dry conditions for Sunday and probably, by then, it’ll be getting pretty dusty.”

You’ve ridden Paris-Roubaix and you know what it’s like to race when it’s dry and wet. The dust and mud can be extreme: which is worse?

“It all depends how much it rains. If it rains just a little bit they can be really slippery. I was here a month ago with two young riders and the roads were covered in water, sometimes they had to ride 50 metres through a puddle over some sections and the mud was really deep. That can be pretty dangerous especially if you’re going in with a full peloton.

“The other aspect is the dust. At the front of the bunch it’s not too bad but, with the motorcyclists and lead cars you can come into a dust storm and see nothing. I’ve had that happen during a race a couple of years ago – there was a period of about 100 metres that I had no vision and I do remember getting through the worst of it and seeing a seat pillar and a saddle just laying there on the road in the middle of the cobbles. I wondered where the rider was but never got the answer… and it make me scared that I was going to run over a rider at some point.

“From the convoy point of view, I think the dust is a bit of nasty element if it’s really dry – it can be very dangerous.”

When you line  up on Sunday, have you got some pre-selected sectors of pavé where action is likely to come from BMC? Or do you just watch the race unfold – how does it work in the pre-planning?

“Actually, we’re going to have another look at the cobbles now and we’ve got a couple of days to sit down and sort of decipher what our plan is going to be. I’m pretty sure it’ll be much the same as last week: we want to be in the action right from the start and have somebody up in the break, we want to be sending guys out and covering all the breaks so that we can set up the final for not only Greg but also Phinney and Hushovd.

“We’ve got a couple of cards to play and then we can build up a tactical plan.

“In effect Roubaix is sort of a race that sorts itself out and the sections leading up to Carrefour de l’Arbre are probably the most critical of the race.

“As for any specifics, we’ll talk about it in the next couple of days and we’ll just decide tomorrow in the team meeting and then we’ll see how that goes on the road on Sunday.”

It strikes me that Taylor has a pretty optimistic and humorous outlook on life. When it comes close to Paris-Roubaix and he knows he’s going to play a big role does he get a bit anxious? How has he been this week?

“He was pretty anxious before Flanders because he was wanting to do a good ride. He was in the break which was good for him because he hadn’t raced for two weeks. He hadn’t raced because of sickness; he was a bit legless in Gent-Wevelgem and then got into the break on Sunday and finished the race. That was good. He got movement in his legs and there was some depth in the effort so that’ll be good for Roubaix.

“I think this is the race on the calendar that probably suits him the most and that’s what he’s been designated by the press as what he should be good at. I think that the pressure is what he puts on himself because he wants to do well.

“He’s at an age now when he needs to ride intelligently and save energy as much as possible and wait for the final. If he does do something it needs to be well thought out and played at the right time.

“Over the last couple of years, I think he’s gained a lot of experience. In 2013 he was on the front going through the Arenberg forest – that was probably a little be pre-emptive and it happened at the same time Hushovd was coming back with two or three helpers after changing a bike. The last couple of years will be good for Taylor. He’ll also see how the team is riding and not using energy – if he can get those things sorted, he’ll go a long way on Sunday.”

If it’s not someone from BMC who is the winner going to be?

“It’s pretty obvious to say someone like Fabian Cancellara. Tom Boonen also wants to do a good ride so he has to be a candidate.

“Maybe we could be looking at some outsiders who could play a big role: perhaps Niki Terpstra if he’s on his game on Sunday but I think he’s probably a little bit over the top of his form. Then maybe even someone like Ramunas Navardauskas from Garmin who was good in Circuit de la Sarthe and is probably riding on Sunday. Maybe it’ll be a big strong guy like that who gets out in a breakaway and can stay away.”

Thanks for chatting Allan. Hopefully the next time we speak one of your riders will have a cobblestone in the cabinet… 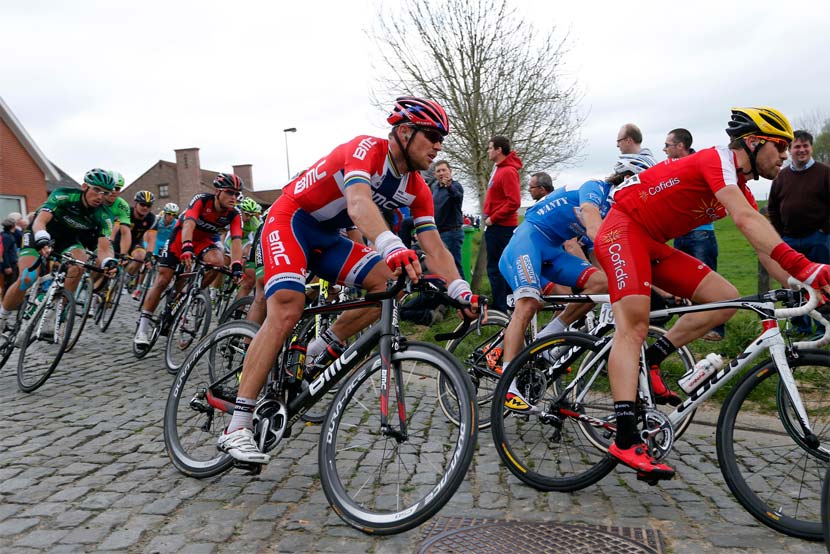 Thor Hushovd has been on the podium in Roubaix before and he’s one of the protected riders at BMC in 2014.
Photo: Yuzuru Sunada