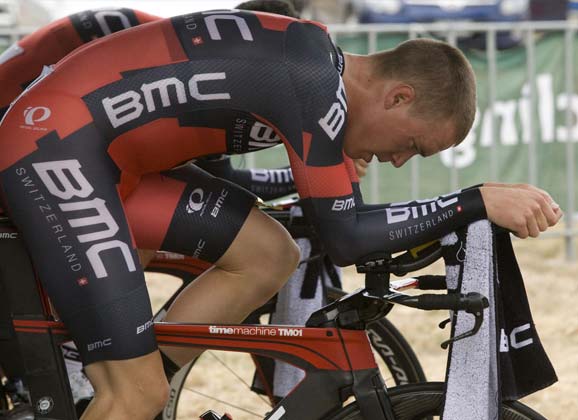 The morning after BMC Racing netted first and second in the Australian time trial championships, RIDE spoke to the team’s manager Marco Pinotti to get his appraisal. The Italian is impressed by the efforts of the champion, Rohan Dennis, as well as BMC’s new Tasmanian arrival Richie Porte… 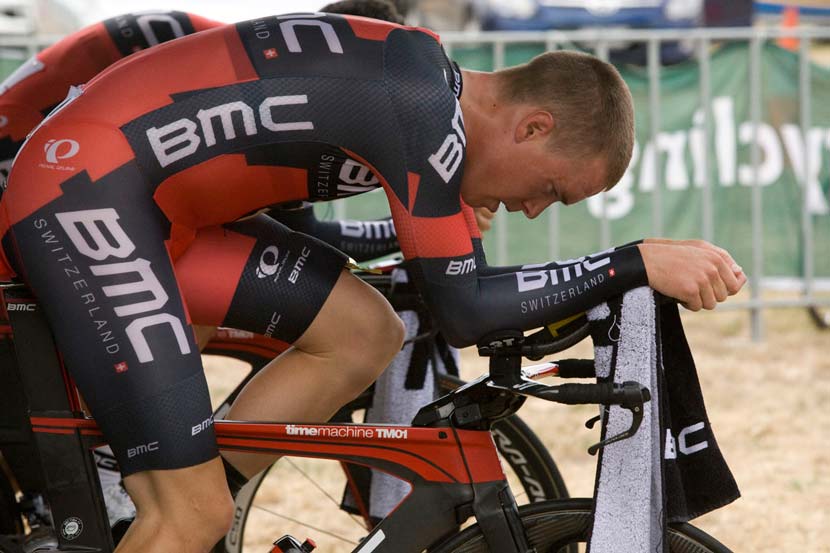 “The time trial is all about the legs so it’s quite predictable but the road race is more about a lottery. They need some luck.” Marco Pinotti is talking about the Australian cycling championships and, more specifically, the chances of BMC Racing’s two starters: Rohan Dennis and Richie Porte.

The Australian pair finished the TT on Thursday in first and second, a reversal of their positions in the equivalent race in 2015. It was their first contest as team-mates and BMC couldn’t have asked for a better result.

Racing against the clock requires strategy and that’s what the Italian advisor to the American-registered team was responsible for in Ballarat. But Pinotti admits that both Dennis and Porte nominated their tactics for the time trial, the coach simply agreed and recommended a few minor amendments.

“My idea was, ‘Okay, you know the hardest part is the final – as you learned last year already…’,” said Pinotti about Rohan Dennis, adding: “But he already had in his mind what was the best strategy and I agreed with him one hundred percent.

“It was to go out in a controlled pace and then accelerate on the way back.”

Essentially the gold medal was won with a reversal of Rohan’s approach in 2015 when, on the same course, the wind blew from a different direction. “This year it was coming from the south, last year from the north.”

Pinotti is in Australia exclusively for the national championships. He flies home to Europe after the road race on Sunday and won’t be here to see if Dennis can defend his title in the Tour Down Under which starts on Tuesday 19 January.

From what he’s seen of the two remaining Australian recruits on the BMC Racing team, there’s a lot for Aussie cycling fans to be excited about. The Aussie flavour remains 11 months after Cadel Evans retired from racing. 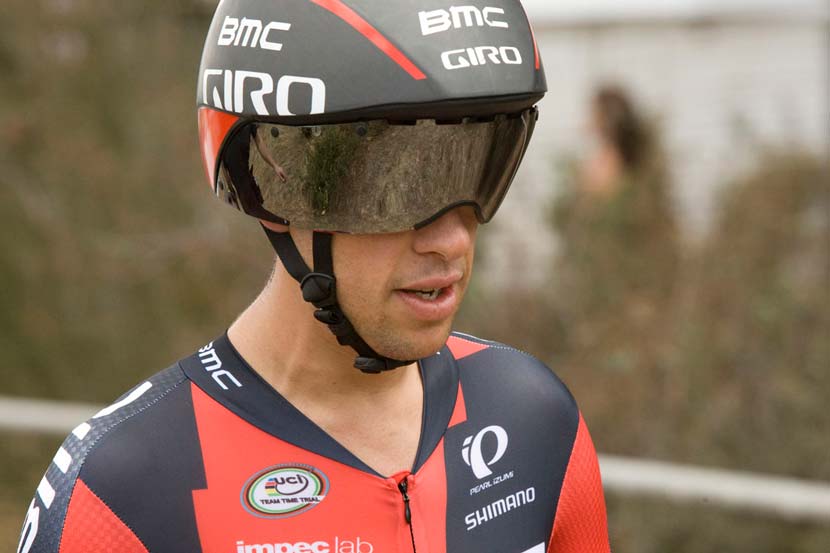 Rohan and Richie finished first and second, respectively, in the Tour Down Under in 2015: the winner in the BMC colours, the runner-up in the black-and-blue of Team Sky. That’s different now and Pinotti is pleased to see the progression of the two stars who will race under the same banner in 2016.

“Both riders did the time trial last year on the same course so they knew what was the best strategy,” said Pinotti when explaining their success. “But sometimes when you are out of the gate at the start, you get too excited and it can be easy to overdo it. In the case of Rohan, he’s experienced and one of the strongest time trial riders.

“It was probably an exception last year that he did this mistake [and finished eight seconds slower than Richie in the TT]. Normally he’s quite good in pacing.

“One year more gives you a lot, especially in the longer events like yesterday.

“The endurance and the capacity to hold the power for longer is something that you improve year after year.”

In his first full season with the BMC Racing team, Dennis became the first leader of the WorldTour for the year after victory in the TDU; he then set off for Switzerland and established a new hour record, 52.491km. Impressive as it was, Pinotti believes he could significantly improve on that with his current form.

“I told him yesterday after the race, ‘If you did the hour record, you would do 53.5km – there’s no question about it! You’d go one kilometre more.’

“It’s not enough to take the record back from Wiggins but just one extra year more – another Grand Tour in the legs, all the time trials he did – it all adds up. He’s in that place in his career when he can gain improvements just by racing.

“Year after year in this kind of time trial, he will improve.”

Dennis backed up from the hour in 2015 and continued making a name for himself. On a hot Saturday in July, he set the fastest average speed for a time trial at the Tour de France and took the yellow jersey for a day. Afterwards he confessed that he was thrilled with the result but that, to him, it was a step towards achieving a greater objective. “My long-term goal in cycling is to win one of the Grand Tours,” said the new Australian TT champion on the day of his first stage win at the Tour de France.

The progression continues for the 25-year-old. He’ll wear green-and-gold in time trials in 2016 and that’s something to be pleased about even if he’s always thinking of the next goal. 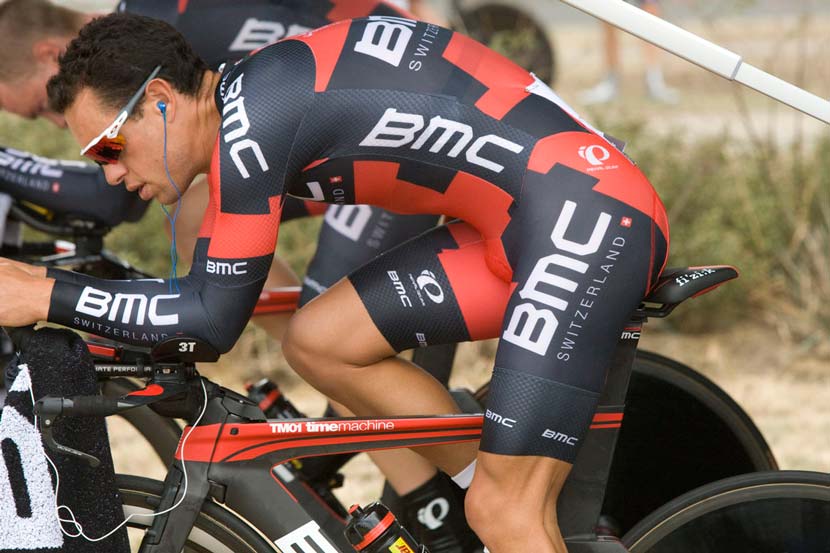 Richie Porte will turn 31 at the end of the month. He has begun The Next Phase of an impressive career. After years of riding in the role of super-domestique, he’s joined a team that’s keen to support him as its outright leader.

The Tasmanian did the time trial yesterday two seconds slower than when he won the national title in 2015. Fast, strong, reliable… and a great way to start his tenure with the new team. Pinotti was impressed, especially considering that he “hasn’t done so much work”. Of course, he’s been training but it’s only in the last couple of weeks has he started with any real intensity.

“It was clear that he was already good yesterday,” said Pinotti about Porte.

“I can see he has good talent.

“He’s very serious when he commits.

“He’s very focussed and he’s easy to work with.”

This is the sentiment offered by the Italian after their first bout of competition together but they’re not strangers. “I knew him as a rider because we raced against each other when I was in the last parts of my career,” Pinotti explained, “and then I met him at the training camp.”

Pinotti is a highly analytical character and he’s been particularly outspoken about doping in the peloton in the past. He is a pragmatist who likes to consider every aspect of the cycling spectrum to ensure that good results are achieved – and achieved clean.

And, for all the success that was achieved by Porte and his former colleagues at Team Sky in recent years, Pinotti insists that there are “no secrets” in the methods used in the British squad’s approach to racing.

Has Richie shared any of that knowledge about his former team? Is Pinotti surprised or interested in anything that he’s told you about Sky?

“No, he actually hasn’t spoken to me about it,” replied the Italian the morning after the time trial. “First of all, I don’t believe that there are secrets – cycling is quite simple.

“There were slight differences… but 80 percent of the warm-up was the same.

“As I told you there are no secrets or big differences, it’s just a matter of habits.

“Stick with your habits – what’s worked in the past – and if you want to try something different, then I can propose something but it’s not much.

“He’s the same physiologically so it’s not like I’ve ask him to do a one-hour warm-up while last year he was doing 20 minutes.”

Furthermore, Porte is the kind of character who maintains relationships even when he’s moved on from one team to another. This was apparent at the TT when his first cycling manager, Andrew Christi-Johnson, was given the task of following his protégé in the car. Pinotti, meanwhile, was behind Dennis. 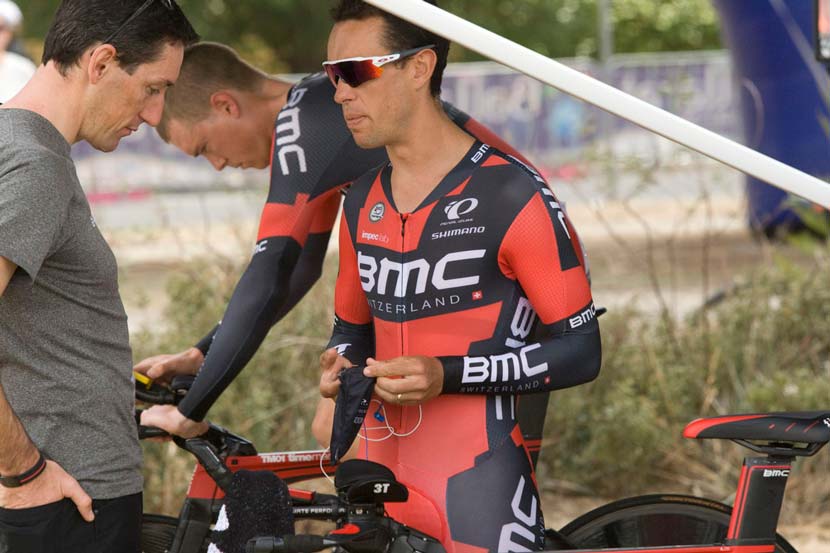 BMC Racing’s two Australians have started their season well. They have proven records in the national TT championships and know they can back up well for the Tour Down Under the following week. But they are specialists: the TT and GC are their focus, but a one day road race like what’s to come this Sunday is less predictable.

What does Pinotti think of his team’s chances in his final assignment for this Australian visit?

“After the time trial, they are both confident they can have a say in the race but they are not fast finishers so they need it to be a hard race for them to drop the fast riders and to come out of the race in top position in the last lap.

“I expect them to be protagonists of the race but to wear the jersey they need a little bit of luck.

“It’s a lottery, especially when you have only two riders.” 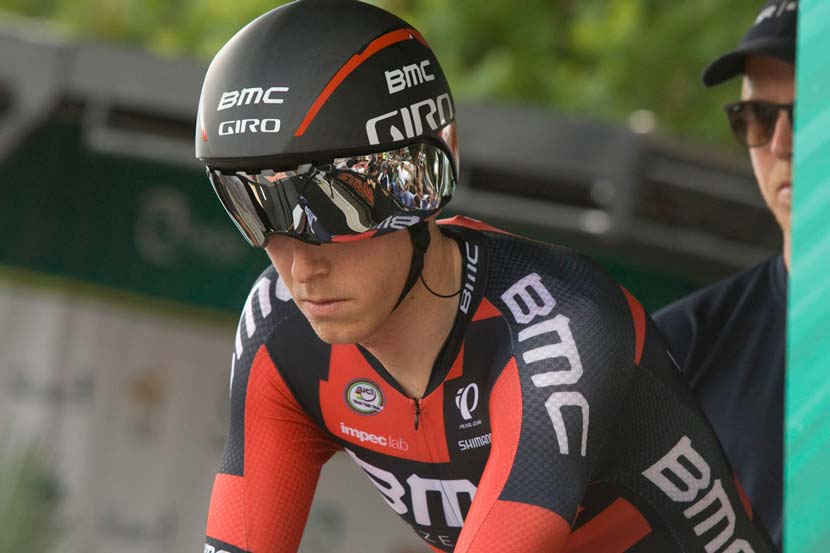