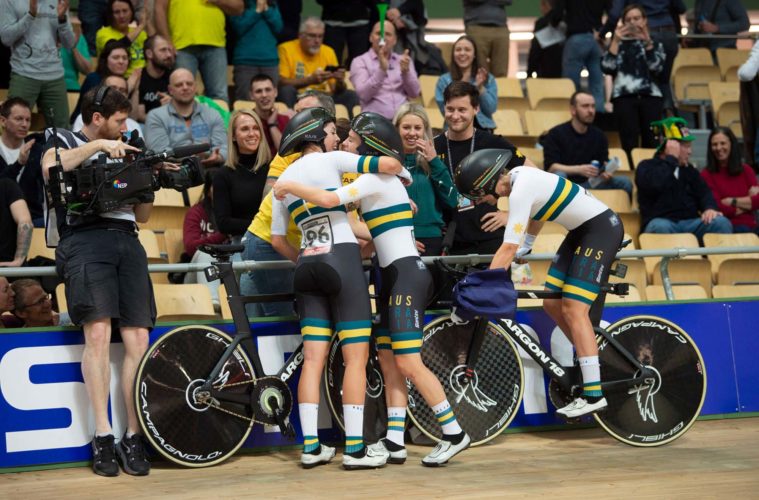 CA CEO Steve Drake: “We want to inspire Australians to ride their bikes”

Although he’s not in Poland to witness the track worlds first-hand, the significance of the team pursuit world record is not lost on Cycling Australia’s CEO…

Have a look around the news sites and cycling media of Australia and you’ll find an occasional reference to the feats of our team pursuit quartets: both the Aussie men and women line-ups won world titles in Poland overnight. Both beat formidable rivals from Team GB. Both set world-class times and executed a long-term plan that sees the Australian Cycling Team muscle their way into the top position in the medal tally after only two days of racing at Pruszkow 2019.

Hello sports fans, are you paying attention? This is exciting stuff!

The footy season is almost upon us, cricket has essentially come and gone for another summer, Winx is keeping pony-racing in the news a little… but really, there is a small window of time in which other sports can conjure some headlines. And now is a time for cycling to pounce and announce itself as a sport that Australians could pay attention to – and, in 2019, get the buzz that comes with being supporters of a successful team.

We have seen other Olympic sports earn front page coverage. Swimming, for example, traditionally makes quite a splash when the nationals or worlds are on, especially when there’s an Olympic Games not too far away.

Cycling, however, has never quite been able to gain much mainstream traction.

Could this pursuit world record, combined with the other successes and the affable nature of the athletes, all add up to the tipping point that cycling needs to earn a little more love in Australia? Only time will tell. 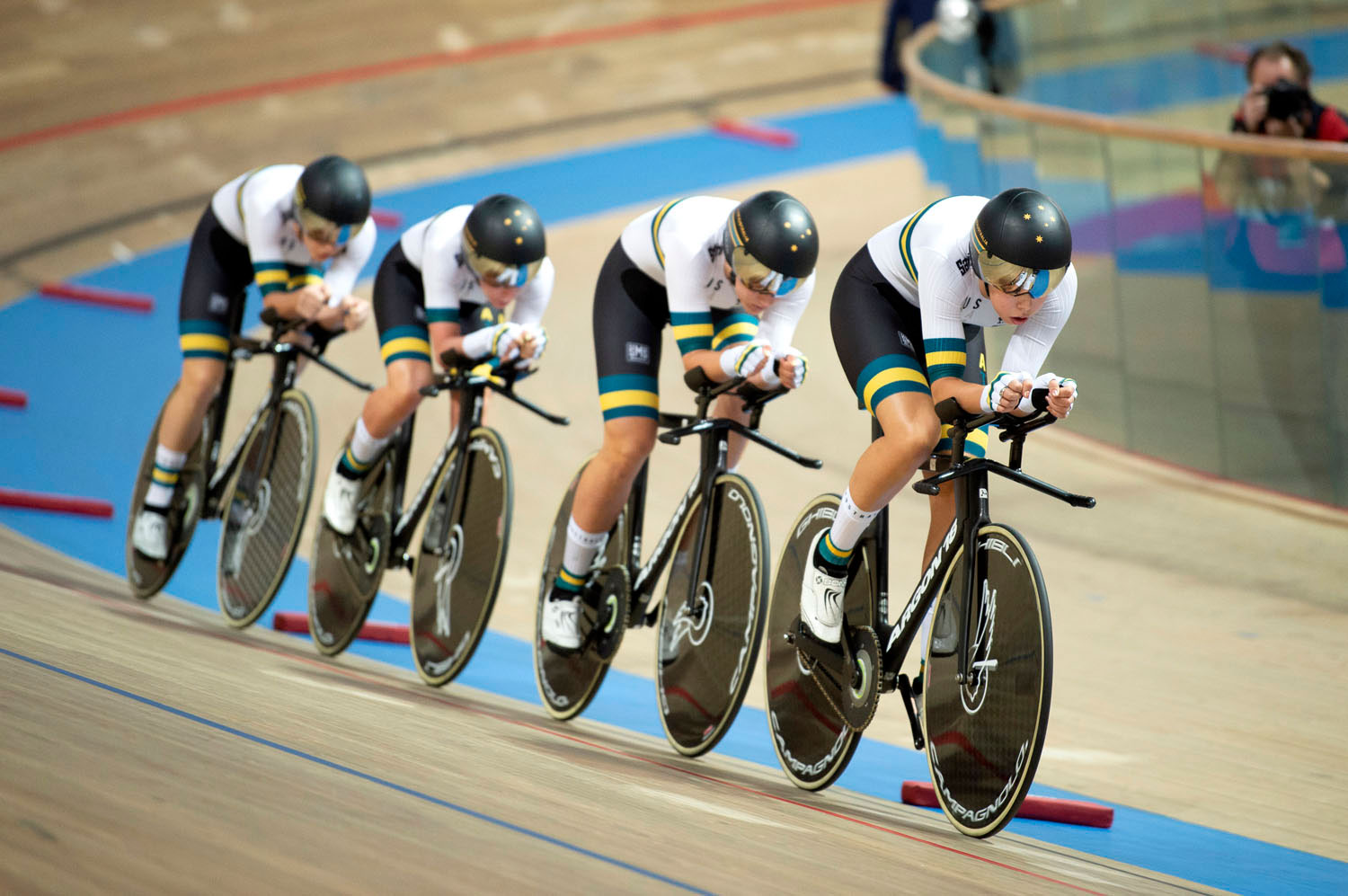 While collecting comments about the world record from others with an association with team pursuiting, RIDE Media put a call through to Cycling Australia’s CEO, Steve Drake. He has a history as a road cyclist but the significance of the 3:48 on the track is not lost on him.

Although entirely unprepared to make a comment, he agreed to answer a few questions about the event(s) in Poland overnight.

It should be reiterated that this interview was completely impromptu, but Drake explained how proud he was of the accomplishments of the Australian Cycling Team and what it means for the sport in Australia… 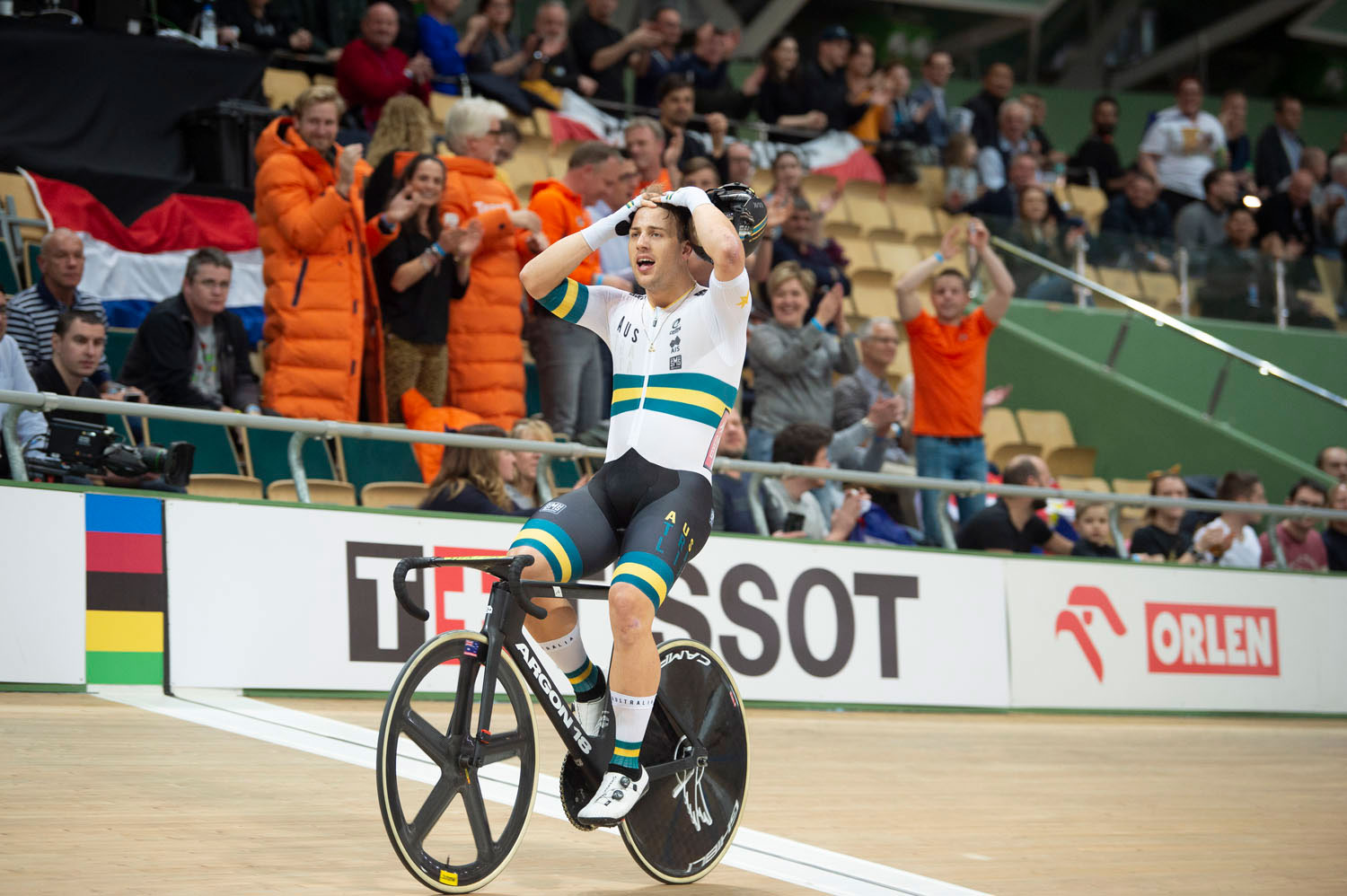 Sam Welsford… winner of the scratch race shortly after the world record ride.

Thoughts on the world record

RIDE Media: I’m talking with Steve Drake, the CEO of Cycling Australia, and we’ve just had a big result overnight with a few world titles – two for Sam Welsford and an impressive world record, as well as victory for the women’s pursuit team. I wonder if you could share some of your thoughts about the concept of going 3:48 in a team pursuit…

Steve Drake: “I think it’s unbelievable to think that they can go that fast; over 63km/h from a standing start, it’s fantastic and it’s a credit to the whole team behind them, as much as the athletes, to be able to go that quickly.”

Steve Drake: “That’s certainly the objective. I mean, we want to inspire Australians to ride their bikes. We’d love it if that then leads to membership of Cycling Australia, but the first objective is to get Aussies – and particularly Aussie kids – on their bikes.” 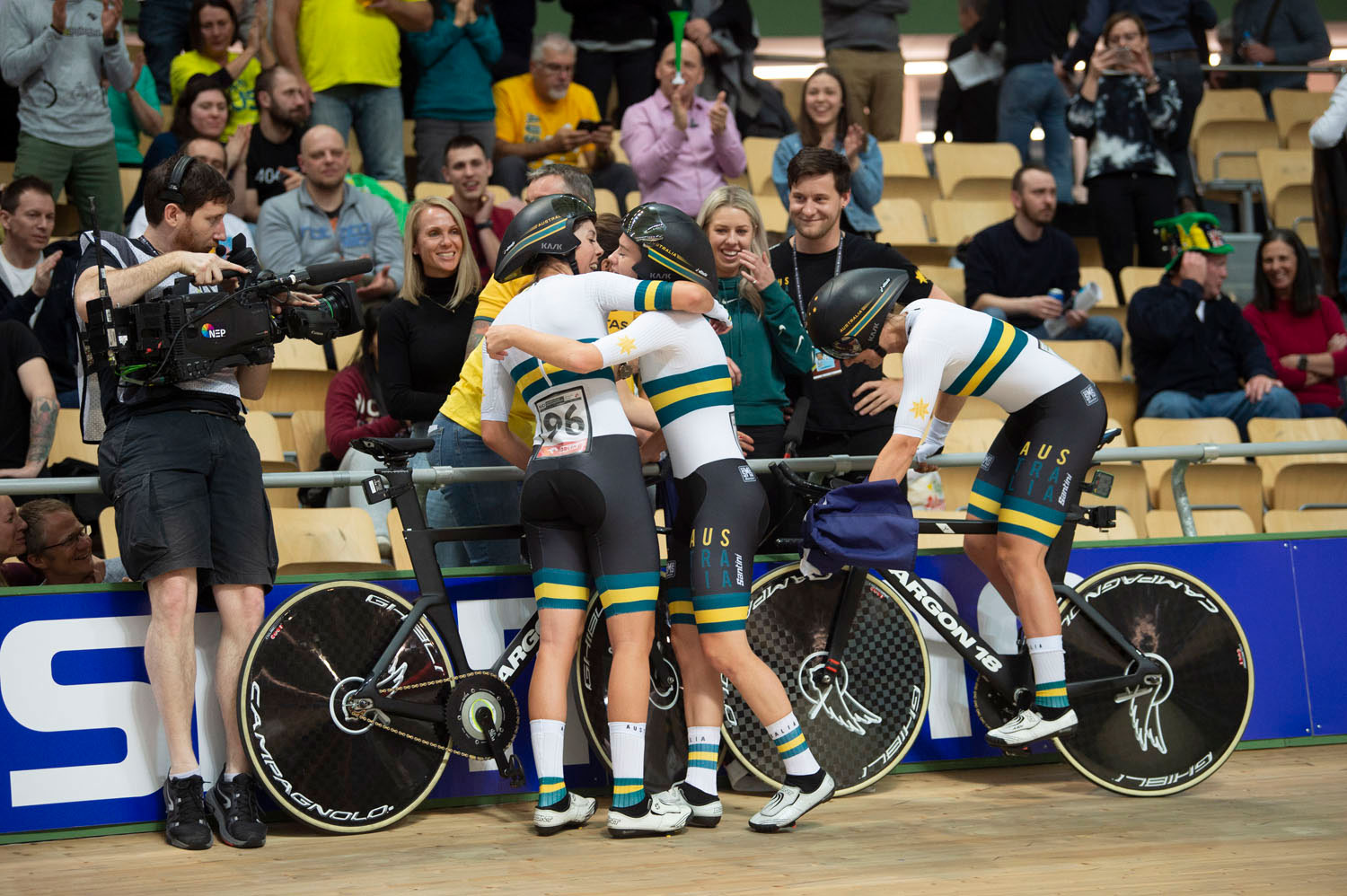 One of the reactions that I’ve had to the news this morning is that we should be celebrating the world championship, not just considering that this is a stepping stone towards Tokyo 2020. Do you see it that way too?

Steve Drake: “Yeah. We’re obviously massively pleased to win at the worlds but we also want to make sure that it is a stepping stone.

“It’s great to celebrate now but we wouldn’t like to be seeing our archrivals, in Team GB, on the top step in Tokyo. We want to be there too.”

There is a bit of a history of Australia winning the worlds the year before the Olympics, or even the year of the Olympics, and then playing second-fiddle to Team GB. Are you confident that Simon Jones and the riders themselves, obviously, can pull a few more seconds out? Or are we not talking about fast times [for Tokyo], rather just making sure we’re racing well against the opposition?

Steve Drake: “I think they’re racing themselves, and that’s not to say that the other teams don’t matter. But what they’re trying to do each time they go on the track, is do the absolute best that they can do and not worry so much about what the opposition are up to.

“I don’t know how many days we’ve got between now and Tokyo but I’m sure, once they get back, they’ll have a rest and recharge and then set themselves some new, aggressive targets to reach on the way to Tokyo.

“And it’s not just the men’s team pursuit. Obviously, the women did a fantastic job in a very close race and then we’ve also seen the team sprint women do fantastically well yesterday.

“So, whilst the boys who broke the world record will probably get the most attention in the short-term, we want to recognise that it is a big group of people who have all got objectives and, so far at least, we’re well on the way to achieving most if not all of those.”

I totally agree, and apologies to the women’s team who achieved an outstanding win over Team GB yesterday, but I guess it’s the heritage and the history that the team pursuit has, and the very fact that the Australians overnight raced a time that, not so long ago, seemed unthinkable that earns it the attention that RIDE Media is giving it today.

Steve Drake: “I think the women’s team will be inspired by the job that the men’s team did. And that will, I’m sure, make them even hungrier to go faster as well.

“It would be great to see both of those teams able to win in Tokyo.”

It’s exciting times and I’ve been checking out the other cycling media around Australia and it seems that RIDE Media is the only one that’s noticed that there was a world record broken. What can we do to try and get a little more coverage for an event such as this? How can we turn the tables and try and get cycling in the same kind of realm that swimming, for example, has enjoyed for world championships past?

Steve Drake: “It’s a good question. We’re pushing as hard as we can to try to get the sort of – quote, unquote – ‘traditional media’ to cover the sport a bit more.

“I’m sure that having world champion athletes won’t hurt.

“Hopefully by the time we have the track World Cup event in Brisbane in December, people will be getting a little more excited about the upcoming Olympics and maybe we’ll even see the World Cup on free-to-air TV.” 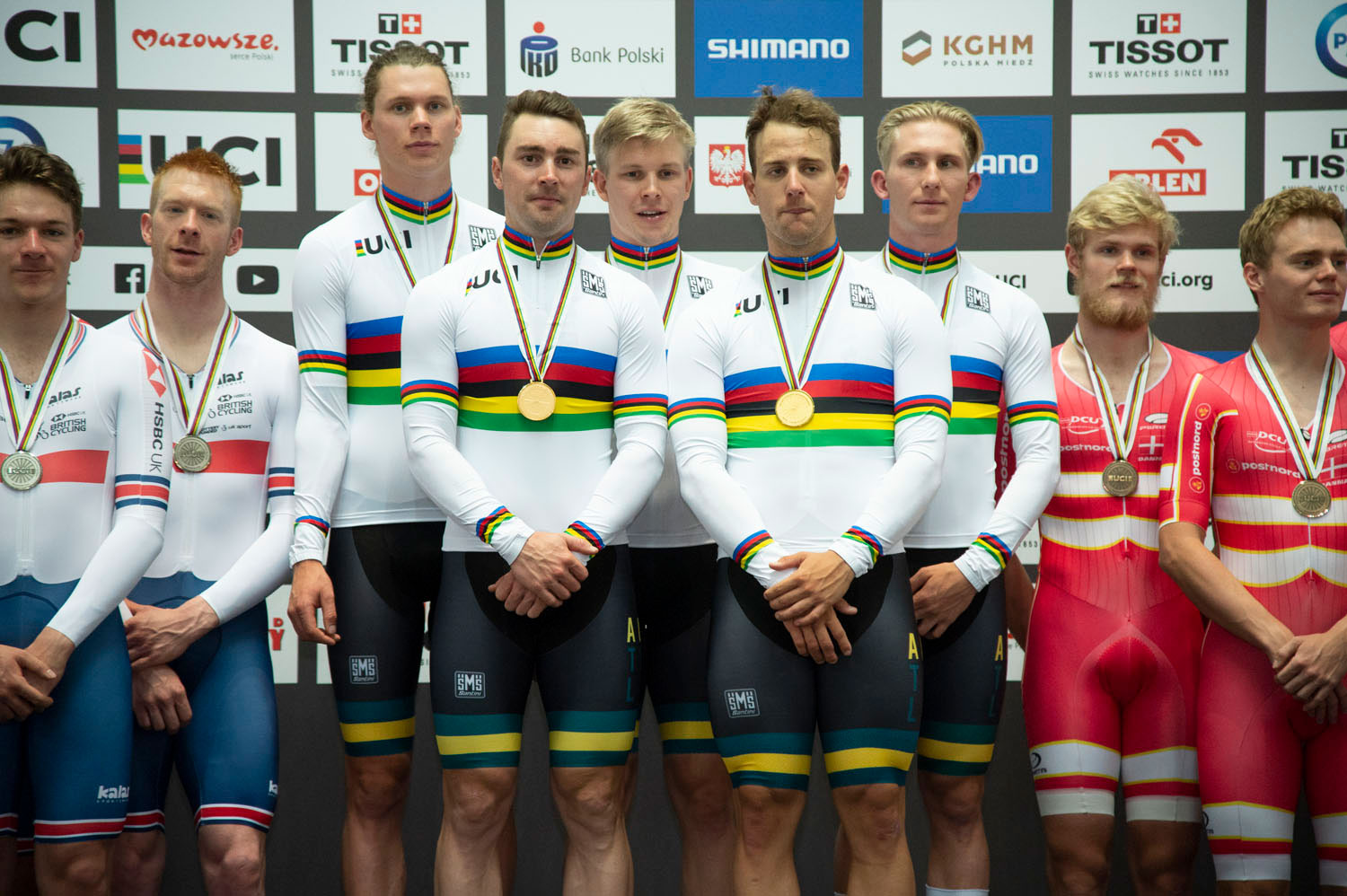