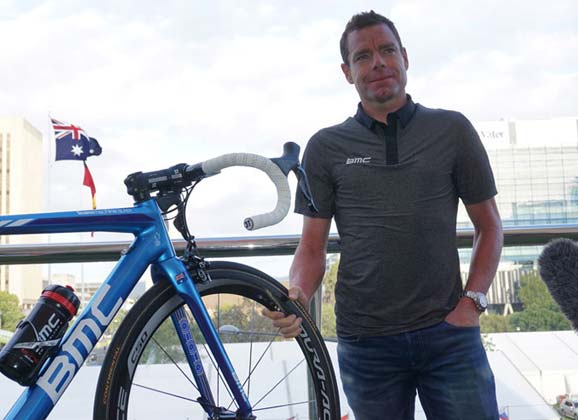 Cadel Evans: nothing left to prove 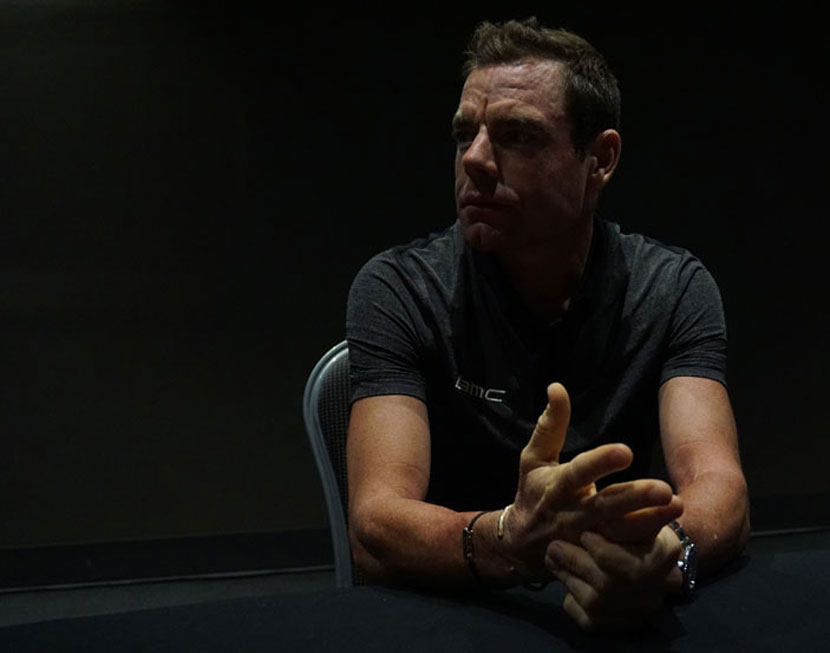 “Overall I’ve just been overwhelmed by people’s appreciation of my efforts… but of course I’m happy and, like it says on my bike, ‘Forever Grateful’ for this pleasure.

“Whether they saw me here at the Tour Down Under in 1999 or they started following cycling in 2011, whatever, there are so many people on the roadsides with signs and calling my name and saying thank you and wishing me luck for my future endeavours.”

Cadel Evans sat down for yet another chat with the media last night. He’s been doing this for years and now he realises that it’s time to move on.

The rider who sits in third place on the general classification of his final stage race on the final day of the 2015 edition of the South Australian race won’t be doing this much longer. He’s got a brand to promote, bikes to help design, a family to spend time with, and a life to live.

When he wakes on 2 February 2015, he’ll be a different man. No longer a pro cyclist, no longer “the GC guy”, no longer a racer… but he’ll always be a competitive cyclist.

With a week to go in his career he was still fastidious. Forget the notion of boozing up or raising a glass to toast his fourth place in stage five of the Tour Down Under, or the fact that his team-mate Rohan Dennis is poised to take the title in this farewell appearance. Not Cadel…

He didn’t open a beer and put his feet up and begin talking about his Glory Days. There was still work to do.

He arrived at the gathering organised by BMC, his current sponsor and the brand he’ll be an ambassador of in his next job, in a team-issue T-shirt and skin that had a glow to it. The room was mildly cool but he rubbed his arms and said, “Is it just me or is it freezing in here?”

It was just him.

Moments earlier he had been sitting in a ice bath recovering from his efforts on Old Willunga Hill. And his core temperature was still low. But he was committed to the conversation. He began to talk… and talk, and talk.

“I was going up Willunga fast,” he’d tell us. “There were crosswinds… and then, when Astana made that move it was really like… well, I haven’t seen riding like that for quite a few years actually. That was something!

“They rode the second half of the climb [on the first lap], rode all the way across the top of the climb, the downhill and into the headwind. And then they split the group.”

He recounted the scene that had unfolded only a few hours earlier when Lars Boom surged and an elite selection was made. Cadel, as he does, raised his eyebrows and gave a little shake of his head. He was clearly impressed by what he’d been part of.

“There were eight riders there in front with 10km to go and that was really something.” 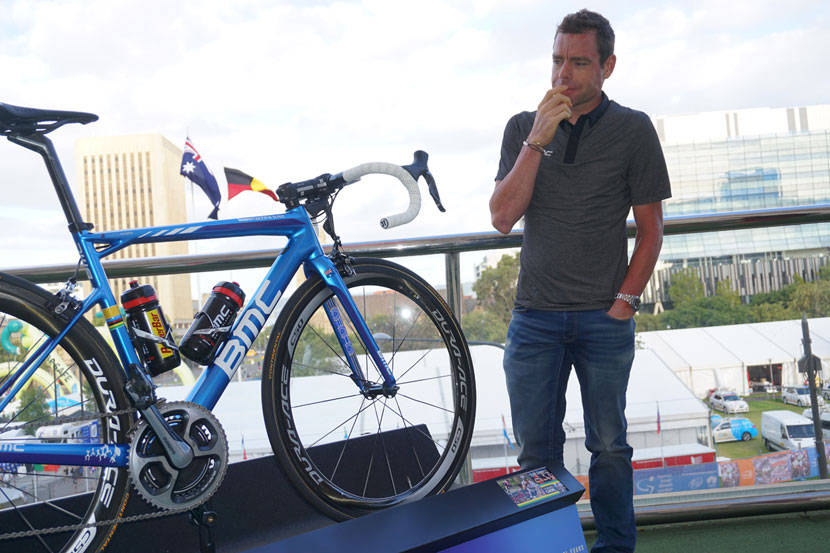 We wanted to talk about his career. Yes, there had been a race on only a few hours earlier and that topic was part of the conversation. But it was only part of a long story that continues to be written. Cadel Evans has been making headlines and prompting people to watch cycling for a long time now. But soon he’ll do that in a different capacity.

He wanted to analyse the contest, speak about his competitors, recognise that he was saying goodbye to the peloton… and talk about BMC.

This is the beginning of a new phase for Evans. He’s going to have be more available if he’s to be the “ambassador” of the Swiss brand but it’s not only a title with the notion of a signature series of bikes. He hopes to be part of the testing facility for a long time yet, but he’ll do so as a good bike rider rather than a man who is determined to be a winner.

There’ll be coverage of the career of Evans in the next issue of RIDE… like there has been from day one of the magazine back in 1998. But for now, let’s show some photos of his bike for the final race – a frame with an ocean blue paint scheme and graphics with things that he likes, from a tribute to Tin Tin, aboriginal inspired paint work, an Australian flag… and his name.

But before the photos, he explains his feelings on that moment when he’d extracted the final bits of competitive juices from his legs in an Australian race that concludes today…

“We think that, the way that the new UCI points system is going to go, it’s better that Rohan gets the extra points more than I do,” said Evans. Always the professional, he insists he was considering the team.

Rohan Dennis was a better bike rider than Cadel Evans this week. And the thousands of people cheering the whole peloton on up that final hill of stage five could see that. Still, Evans sees his role – being third on GC – as a gesture of support for BMC, the team owner Andy Rihs, and the South Australian who is likely to win the title of the Town Down Under in 2015.

“I think I won a lot of respect from my team-mates and colleagues and people who live in the world of cycling by the way we rode the last couple of days.

“Within in the team I received a lot of thanks but the guys here were so motivated because we took the jersey and we only had four riders to ride, really,” he said of the situation that saw Dennis and himself at the top of the GC standings, while the under-23 TT world champion Campbell Flakemore was recovering from collarbone surgery… thus, the two Australian leaders had four workers: Michael Schär, Peter Stetina, Danilo Wyss and Silvain Dillier.

“I went into the room with Micky and Danilo – who have been on this team as long as I have – and they said, ‘There’s no problem, we’re going to keep this jersey.”

By now, he had been given a long-sleeve pull-over to warm him up. And he had forgotten about the chill he felt when he walked into the room. His thoughts were on the race and he explained how he saw it. The final metres of the Willunga stage when he lost contact with Richie Porte, Dennis and Spaniard Ruben Fernandez and he conceded: he was not able to follow. They were better. He was getting older. But the passion remains.

“If you do everything right and you train well and everything goes according to plan, you’re going to be pretty close to the win. Today was the same thing.

“I turned myself inside out in the last kilometre and I really didn’t have anything left. Fortunately Rohan was carrying the jersey for the team…

“You always look back on a race and think, ‘If I’d just gone a little bit better there, or if I’d just pushed a little bit harder there…’ but you do what you can in the moment and still I was interested today to see what the numbers on the SRM were and get an idea of how close I am to my best.”

And, I asked, how close was he?

“I didn’t have a chance to download it yet.”

He might be retiring, but he’ll still be monitoring his form… and so will many others. There’s one stage yet to come and then the finale in the race with his name. And then the numbers won’t matter anymore. He’ll still be a good bike rider, that’s his lot in life. But from 2 February onward, he won’t be compelled to keep on proving it.

– Story and photos by Rob Arnold 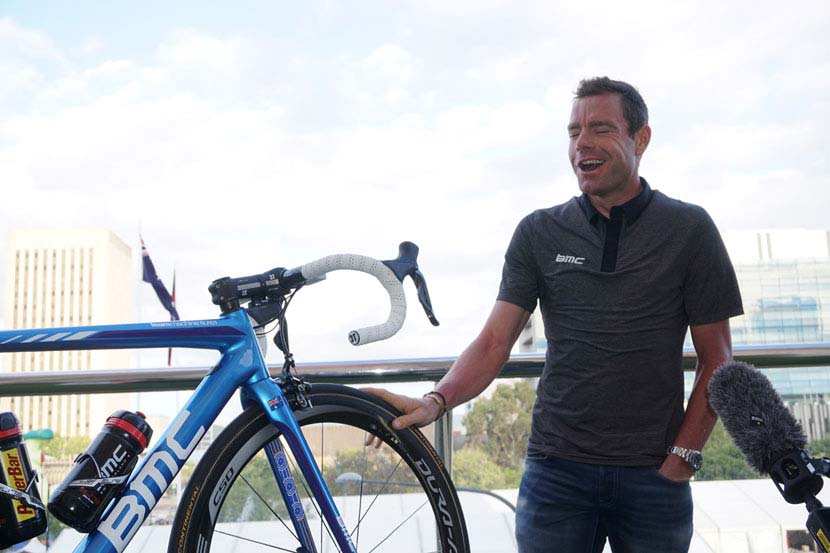 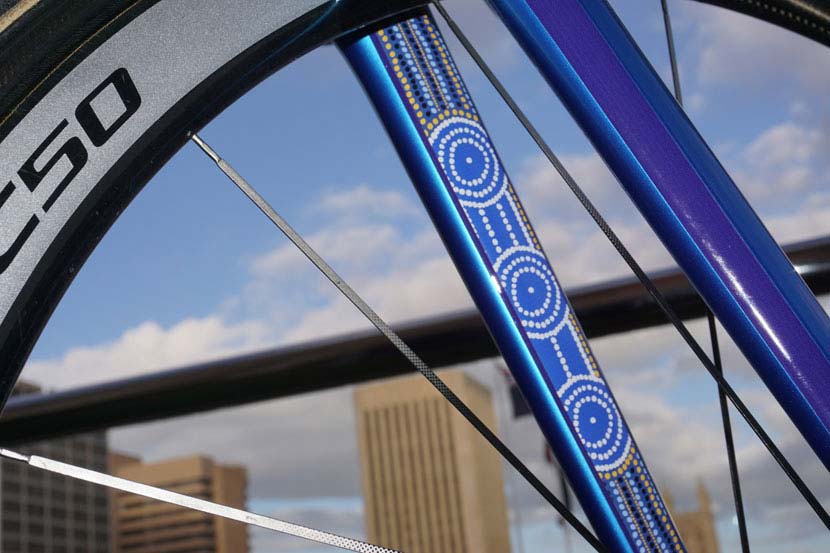 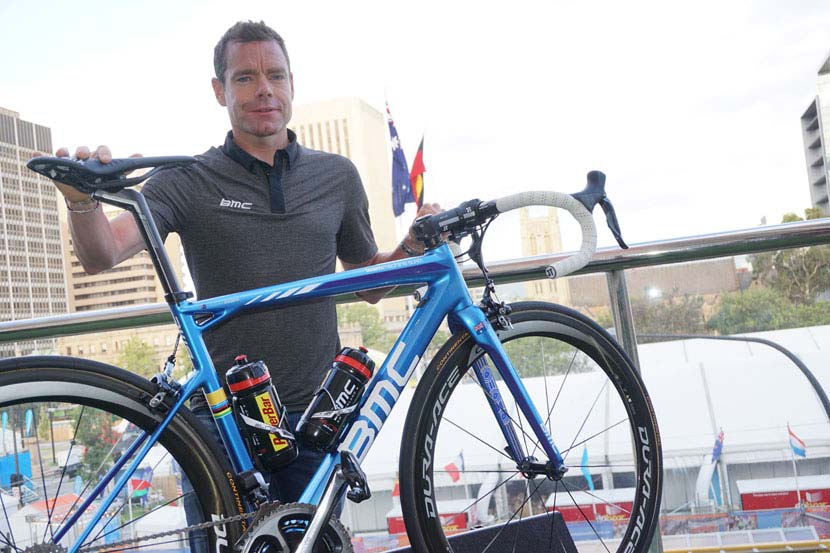 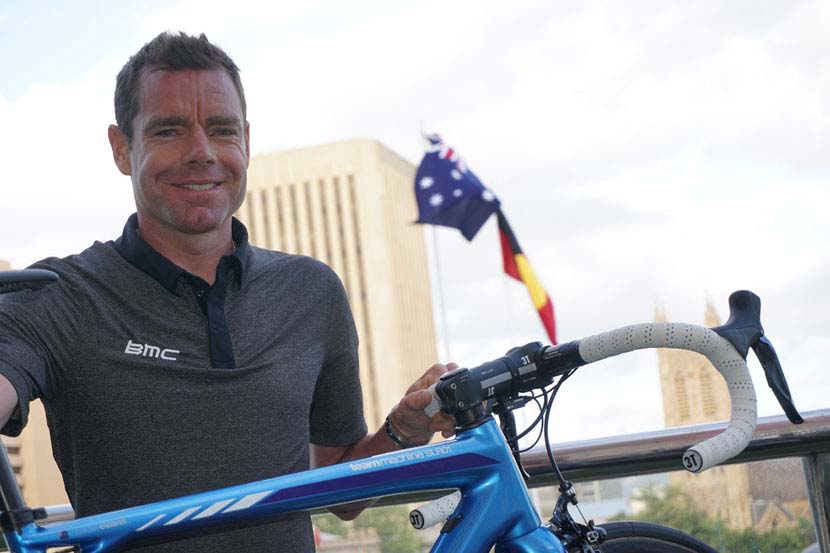