The Rogers name is making a return to the top of the results sheets in Australian cycling. Cameron Rogers turned 16 last December and in the opening months of 2021 he’s won three under-19 national championships. 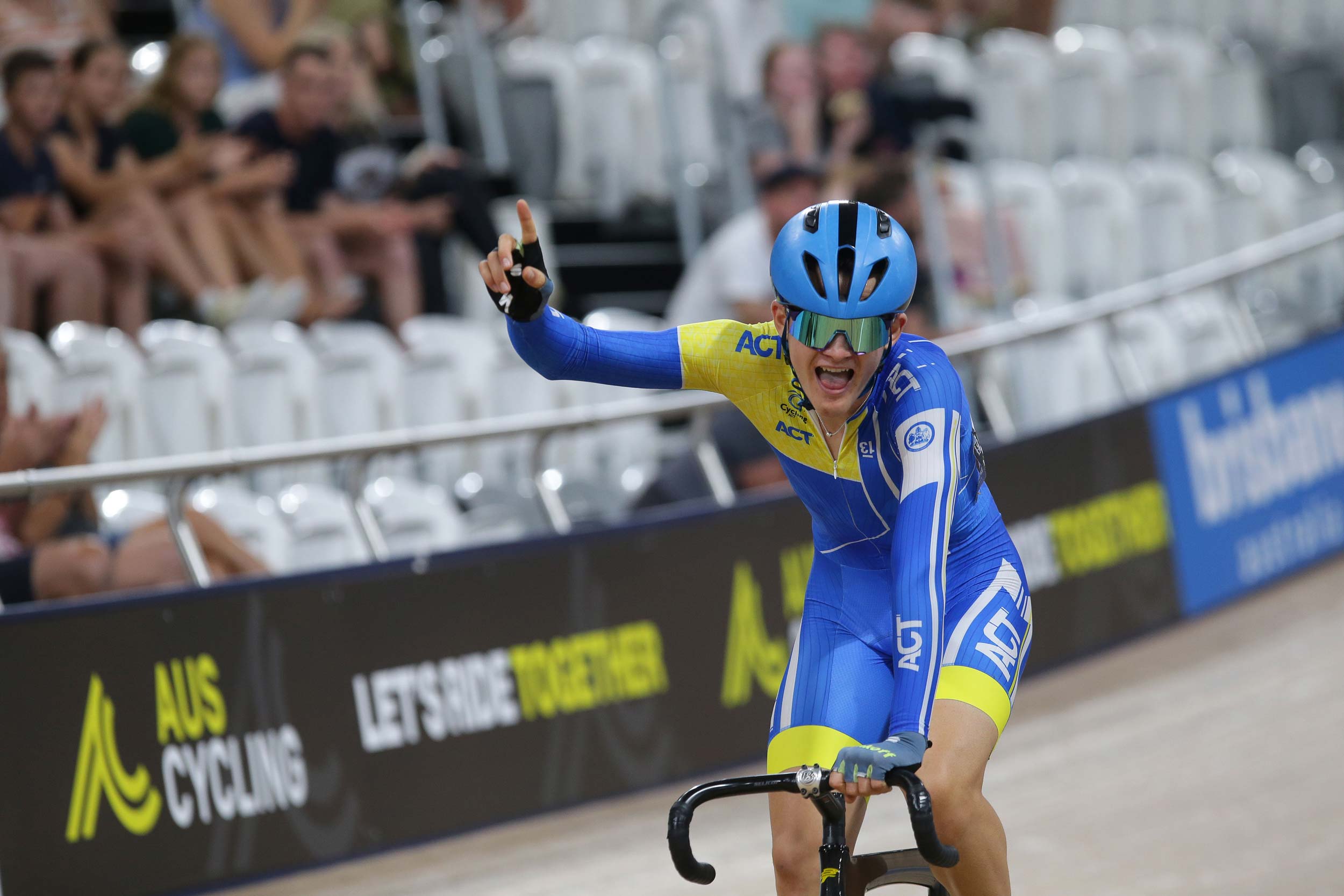 To understand why I’m reporting on the 16-year-old winner of a couple of under-19 medals at the recent Australian track championships, it’s necessary to tell some of the backstory of a family with a long, strong association with cycling.

Ordinarily, results from junior racing are largely relevant to the riders who achieve them and their family and friends. And traditionally I’ve shunned reporting on junior racing because, at that age, cycling should be about fun, not pressure to perform. It’s fantastic to earn medals and get some experience but, at that young age, the most important thing is that the riders enjoy their cycling.

Winning is great, but success should be a by-product of the process. The emphasis should be to have fun first… and, in some instances, good results may follow.

For Cameron Rogers that’s what is happening in his first year in the under-19 ranks. He likes riding his bike. He lives in a place that’s perfectly suited to cycling. And he’s grown up in a family that has lived the cycling life since long before he was born.

At the age of 16, he’s got a collection of national titles: first in the Australian criterium championships earlier this year, and now first in the points race and omnium on the track.

“I’m doing a lot of cycling at the moment and I’m enjoying it, which is good,” he tells me shortly after returning from a test for COVID, following his trip home to Canberra on Monday after five days of racing in Brisbane.

“I like doing heaps of training and I’m looking to get to do some bigger races.” 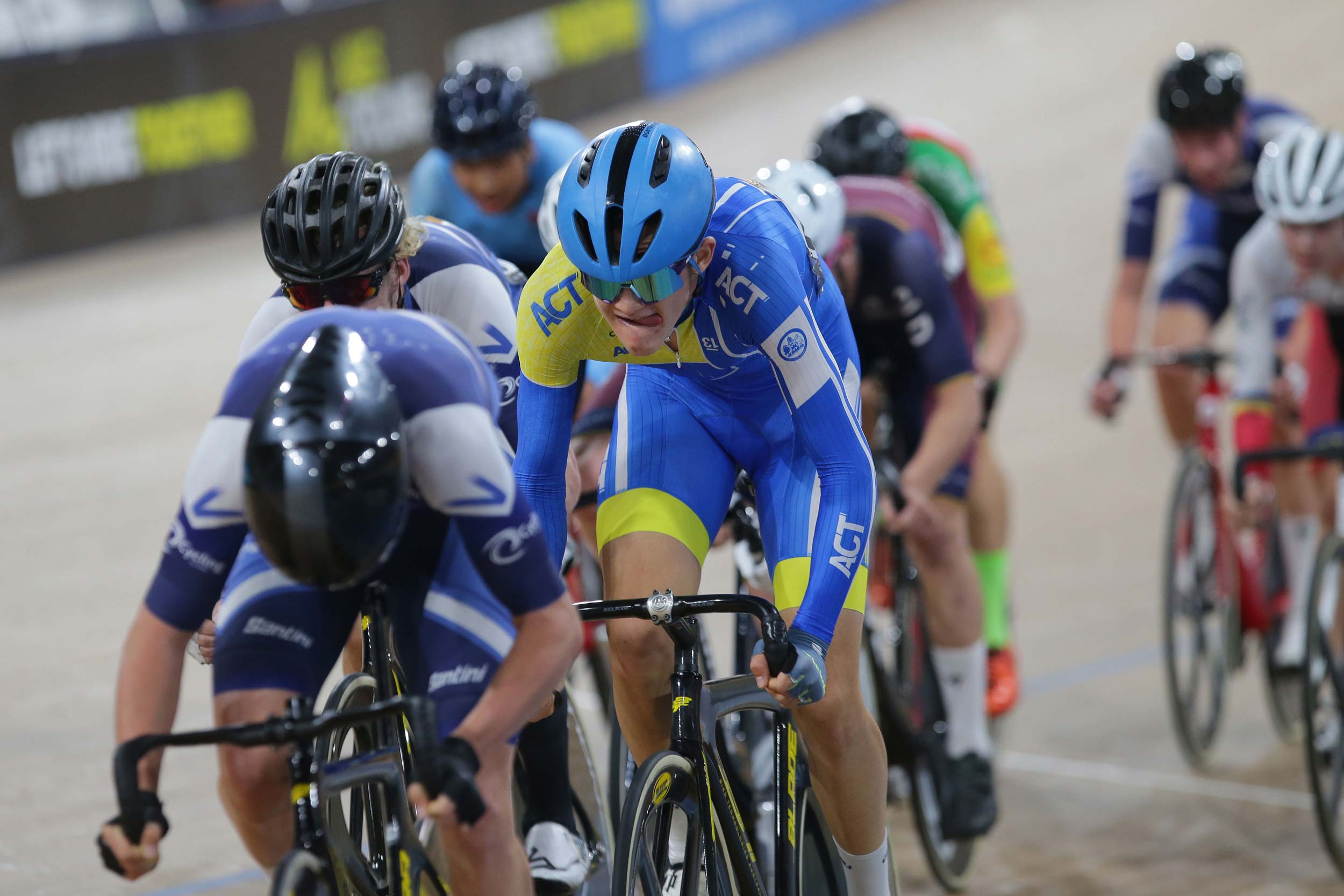 He speaks like a 16-year-old; short sentences and not a wealth of information offered. He is polite and amused that he’s getting some attention because of his race results.

His father, Pete, notes that interviews haven’t exactly been a priority for Cameron. “He’s still very green when it comes to anything other than riding bikes or playing computer games.” And that’s fine too. Kids should be kids, there’s plenty of time to be serious later in life.

Still, I’m reporting on Cameron and his race results because it’s another interesting chapter in the story of Australian cycling. 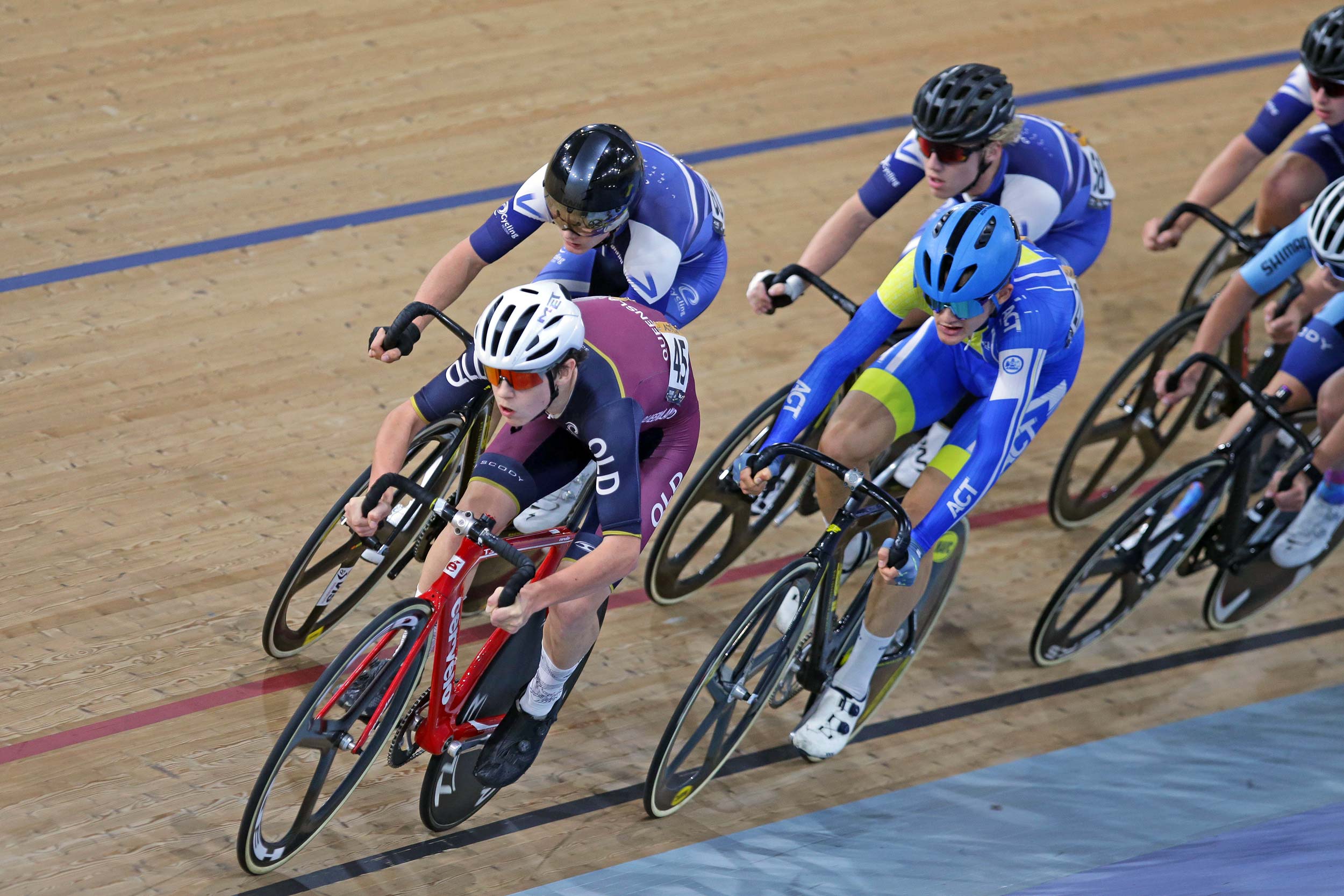 For me, this rider profile is a little more personal than many that I’ve written over the last 30 years. I’ve known ‘Cam’ since he was a week old. He’s the son of Peter and Raeleigh (née Tennant), born in December 2004, and he’s fast becoming a rider to watch on the domestic racing scene.

There’s a long list of results achieved by riders from Canberra with the same surname and a trio of brothers – Peter, Deane and Michael – are well known in sporting circles. All of them have enjoyed success as cyclists, but it was the youngest, ‘Mick’, who achieved the most notable conquests. 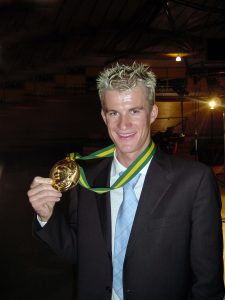 “Uncle Michael” is the rider who Cameron Rogers most wants to emulate.

And it’s Uncle Michael who Cameron Rogers looks up to most when he considers the cycling life, and what he might be able to achieve in the coming years.

“No offense to dad, but Uncle Michael is The Man. He’s my hero,” says Cameron. “I grew up watching him on the tellie – in the Tour de France and everything. He was with the best of the best, right up there and I was thinking, ‘I want to do that when I’m older…’ and, well, I’m getting older now.”

For Pete, Deane and Mick, it all started on the Narrabundah velodrome and bike paths of Canberra. They started out competing on the track, and often travelled to contest crits in Sydney or wherever else there was racing. Their parents, Ian and Sonja, supported their cycling ambitions and the rest, as they say, is history.

Deane would actually crack the international scene before the other brothers, winning the first ever individual time trial world championship, as a junior in Quito, Ecuador, in 1994 (a few months before Chris Boardman won the elite gold medal in Sicily). 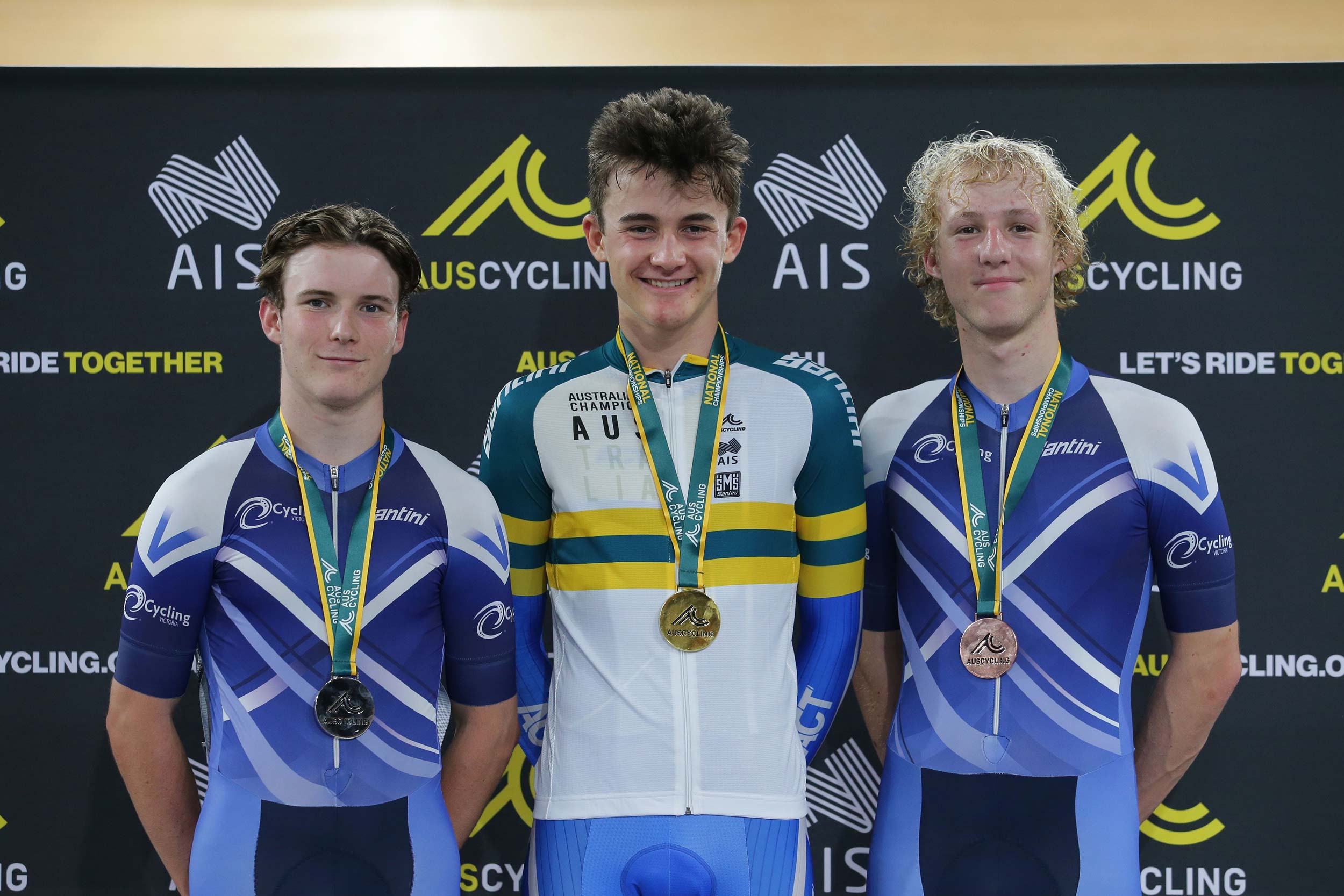 Deane and Peter raced together for a season in 1997 but after that, the middle brother opted out of the sport and focussed on building a life for himself in Canberra. (Initially he started ‘Ride Shop’ in Manuka, and then came various roles in the bike trade including the one with Trek’s Australian operation that he continues to this day.)

Pete’s career was heavily affected by the strange machinations of pro cycling in the early 2000s. After starting out with the Giant-AIS-ZVVZ team in 1997, he joined compatriot Matt White (now a DS with Team Bike Exchange) for a season at Amore & Vita, and then raced with the German Die Continentale team for a couple of years.

The beginning of the end for Pete Rogers’ racing career came in 2001 when he was part of the much-hyped Linda McCartney-Jaguar team… for a few months. If you know the story, you also know that the sponsors hadn’t committed to funding the pro cycling team, and thus the team folded shortly after the start of the season… and riders were left in limbo.

Pete was 24 at the time, in the form of his life… but stranded without a team. After a few more seasons of discontent, it was time to call quits on his racing days, learn a trade (carpentry) and watch his youngest brother rack up results as part of the formidable Mapei Development team.

He would marry Raeleigh, a successful triathlete who had thrived in the X-Terra series of endurance races, and by the end of 2004 they were parents. Cameron Rogers had arrived… and, of course, he too would soon be riding a bike. 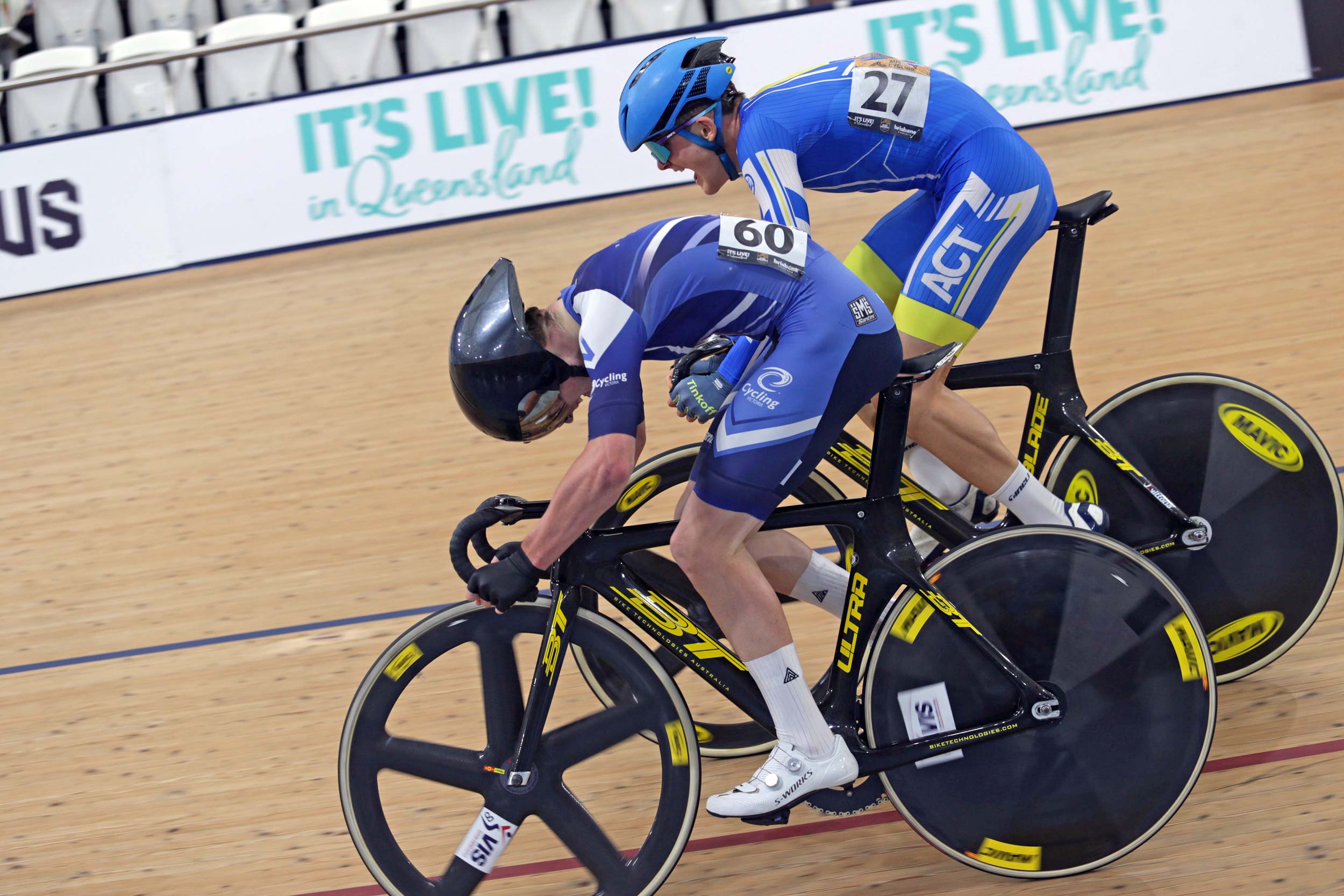 As was the case with his father and uncles, success seems to come relatively easily for Cameron Rogers but, even with his collection of national titles in 2021, he admits that there’s a lot of talent coming through the junior ranks.

“There are some strong guys who I’m up against and they’re all flying at the moment,” he told me yesterday while overviewing his time at the track nationals. “A lot of them did the road nationals as well, so they’re all coming from that and popping straight over to the track. So, in the longer endurance races – which I like – there were a lot of guys doing well.”

The racing in Brisbane allowed the likes of Rogers to showcase his talents while also enjoying a taste of tough competition at a time when track racing no longer earns the kind of attention it once did in Australia. Still, the velodrome does provide an ideal platform to hone cycling skills and develop a love of racing.

In that sense, track cycling has served Cameron Rogers well, just as it did 20 years earlier for his father. Winning a few gold medals doesn’t hurt the motivation either and, although he’s only 16, he’s already thinking that there might be a career in this caper if he keeps on riding like he has been.

“That’s my ultimate goal,” he says in response to a question about turning pro one day. “I’ve always wanted to race at the pro level just like Uncle Michael did. I’ve always looked up to that.

“Deane and dad, they’ve got all the skills and the know-how of what to do, so they’re obviously helpful to listen to but I just want to emulate Uncle Michael.” 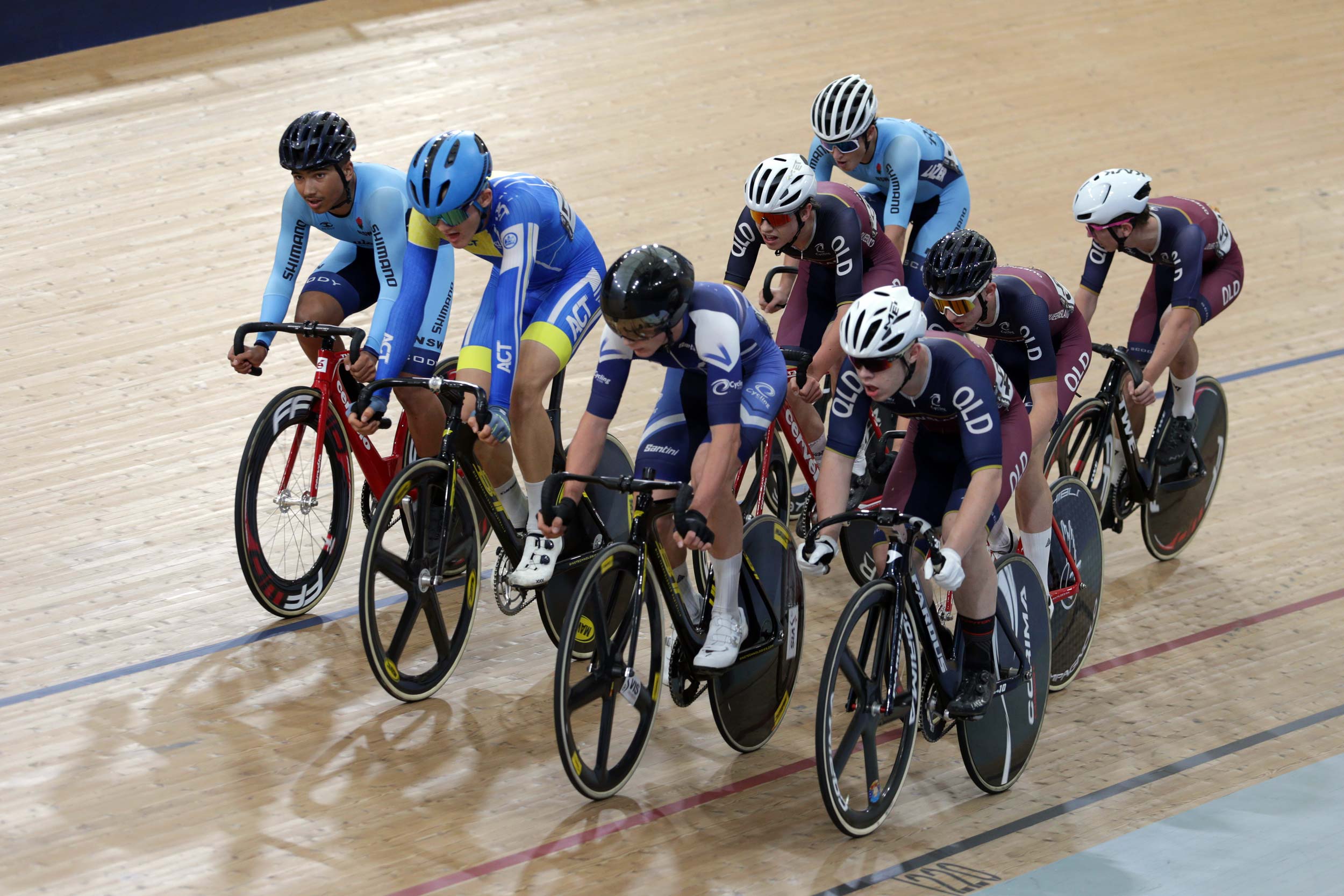 Cameron Rogers is one of few young cyclists who can ride in a Team Sky skinsuit and team-issue Kask helmet and not be mocked by his peers. Riders his age tend to know his heritage and if he turns up with some special equipment, it’s usually hand-me-downs, direct from the pro ranks.

At 16 he’s 186cm tall (6’1” in the old language) and “almost as tall as dad now”. He likes the endurance races and has quite a formidable sprint finish that helps earn good results. He is one of the tallest in his age group and it makes him stand out in a crowd.

What also makes Cam a little more prominent in the bunch is his riding style and the familiar cheeky grin that emerges when he’s making an effort. Those who remember seeing his father and his uncles race would likely agree: he has a very familiar aesthetic. Not only has he grown up watching Uncle Michael race against the best of the best, he has learned how to pedal with experienced instructors.

What has made Cameron Rogers the rider he is, however, is about more than his upbringing and genetics. The ease of cycling in Canberra, and the myriad places to ride have helped make him a versatile, strong, and capable cyclist.

During our chat on FaceTime, I ask how important it is to have Mt Stromlo nearby and he smiles and understands why that’s a relevant question. “I could turn the phone around and you’ll see my ‘backyard’, Stromlo is basically across the street from where I live.”

The site of the 2009 MTB worlds is a playground for cyclists in the ACT. And it was on the trails of Mt Stromlo that Cameron Rogers first developed his love of riding. He is collecting national level medals on the road and track but it probably won’t be long before there’s also a MTB trophy or two in the cabinet.

“I love mountain biking,” he says of his first cycling love. “It’s just so good for your skills.

“I’ve been doing cycling my whole life, but my first race was when I was around seven years old, and I just loved it. I didn’t do well, but I love the racing and I’ve done it ever since.

“I’ve grown up around the bikes and that’s the only life I know.

“I could point the camera out the window and show you Stromlo and I’m always going over there on the mountain bike. I love the mountain bike because you can just go and ride, have fun, and find out what’s good about cycling.”

Winning may follow fun but, right now, that’s not what’s important. What matters is that there’s a new generation of Australians learning what’s good about cycling… and enjoying themselves enough to start believing they might be able to make a career out of it.