Luke Plapp won the final event of the Australian road cycling championships with a considered, patient ride in what is typically a race of attrition. RIDE Media spoke with the new elite men’s road race national champion the morning after his victory. 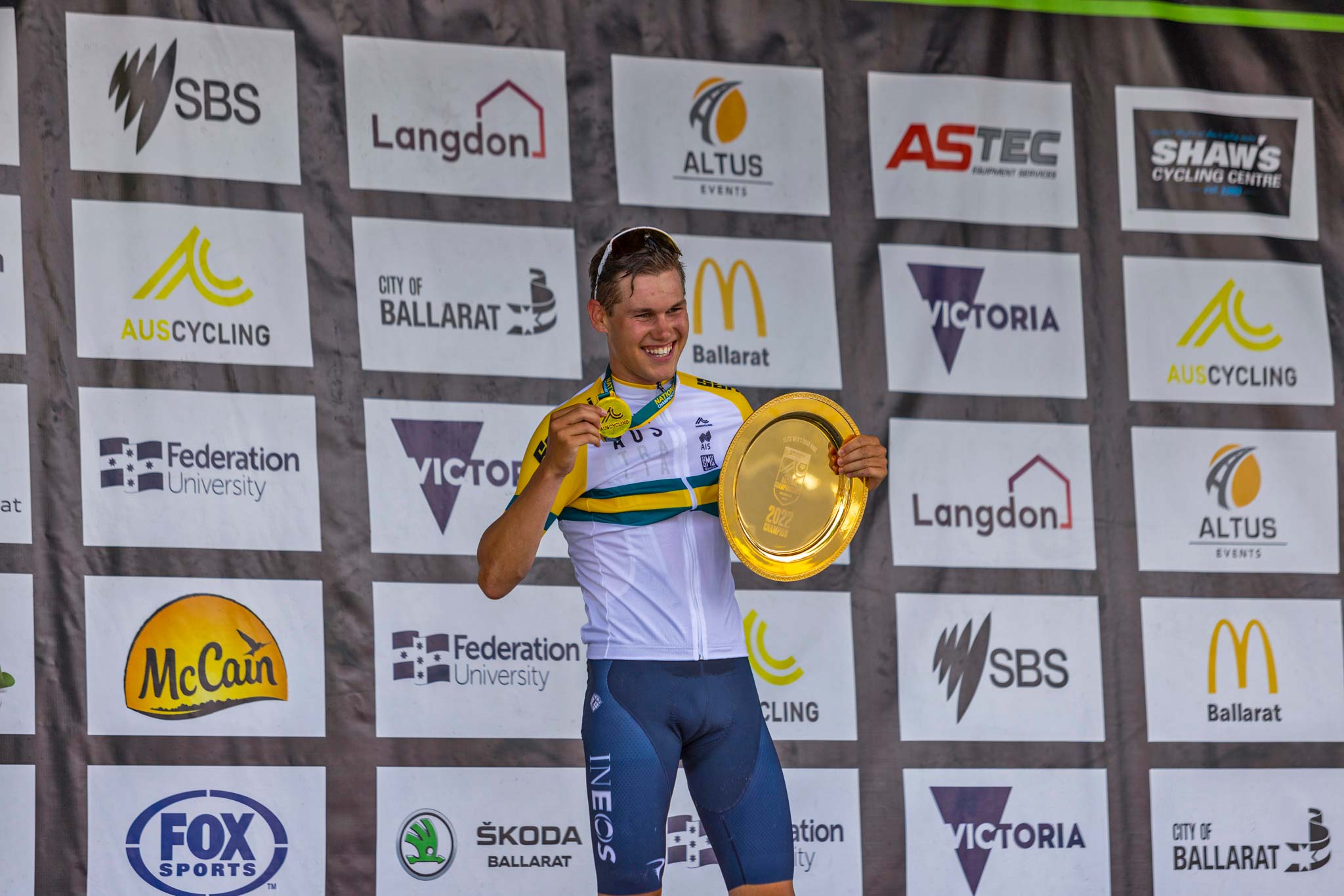 Below is a verbatim transcript of an interview that was interrupted by a poor connection while he was driving (and talking on the car speaker) through Ararat. We have agreed to follow-up with a longer interview about the 2022 season in the coming days.

Q. RIDE Media: It’s the Monday after the #RoadNats of 2022 and I’ve got Luke Plapp on the line. He’s driving but he’s on the speaker and we’re going to have a chat about him winning the final event of a different kind of nationals, but one on a course that always sets up a race of attrition. So Luke, national champion for a year – you must be chuffed.

A. Luke Plapp: “It’s pretty awesome. It hasn’t yet really sunk in but I can’t wait to be able to go for a ride in the morning and pull on those green-and-gold bands and wear that for the next 12 months.” 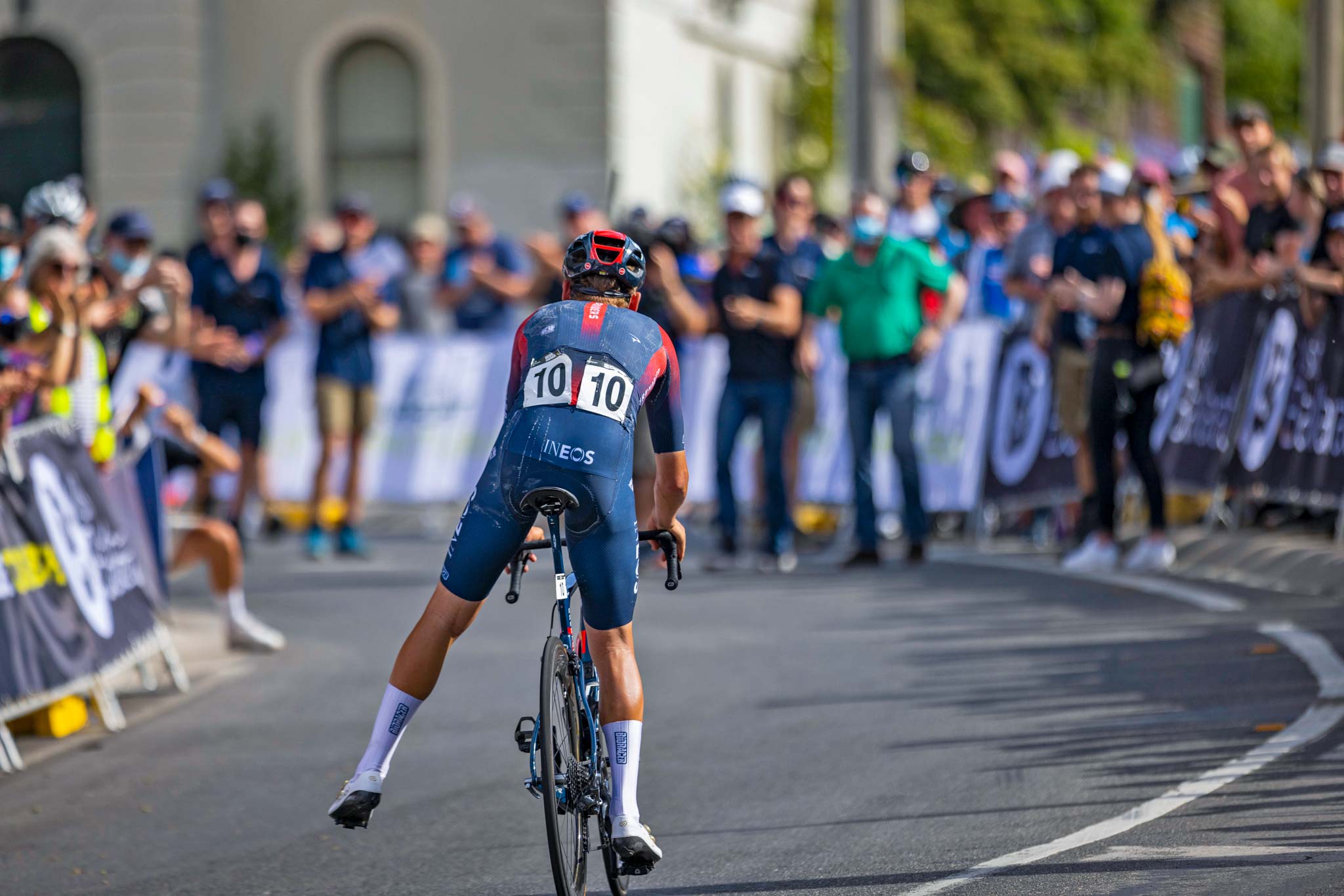 RIDE Media: I don’t want to be jumping to conclusions, but did you come prepared? In other words, did Ineos Grenadiers supply a national champion’s outfit just in case?

Luke Plapp: “Well, it was more for the possibilities of the TT [which he didn’t contest after having to forfeit a start in the race on Wednesday because he was a close contact of a COVID case]… but, obviously it’s the same kit, the same sponsors, and all the new BioRacer stuff which is sensational. But yes, I’ve got the full Aussie champion’s kit already.”

RIDE Media: So, that’s a little of the housekeeping in order. Now, let’s talk about the race. I’m making an assumption based on having watched you in the elite men’s race for the last two years in the road nationals. In 2021, you went on the attack early – with over 50km to go – and then the legs ran out of juice. Was that a bit of a catalyst for the patience you displayed yesterday?

Luke Plapp: “Yeah, for sure. It has definitely been on my mind for the last 12 months or so, how I rode last year. And I guess I wouldn’t have taken it back and I loved the way I did race in 2021 but it definitely changed the way I raced this year.

“There were lots of occasions yesterday when I was ready to attack early again, and I probably would have if it wasn’t for last year.

“I learned a lot of lessons from last year and I think that was the main reason that this year went so well.” 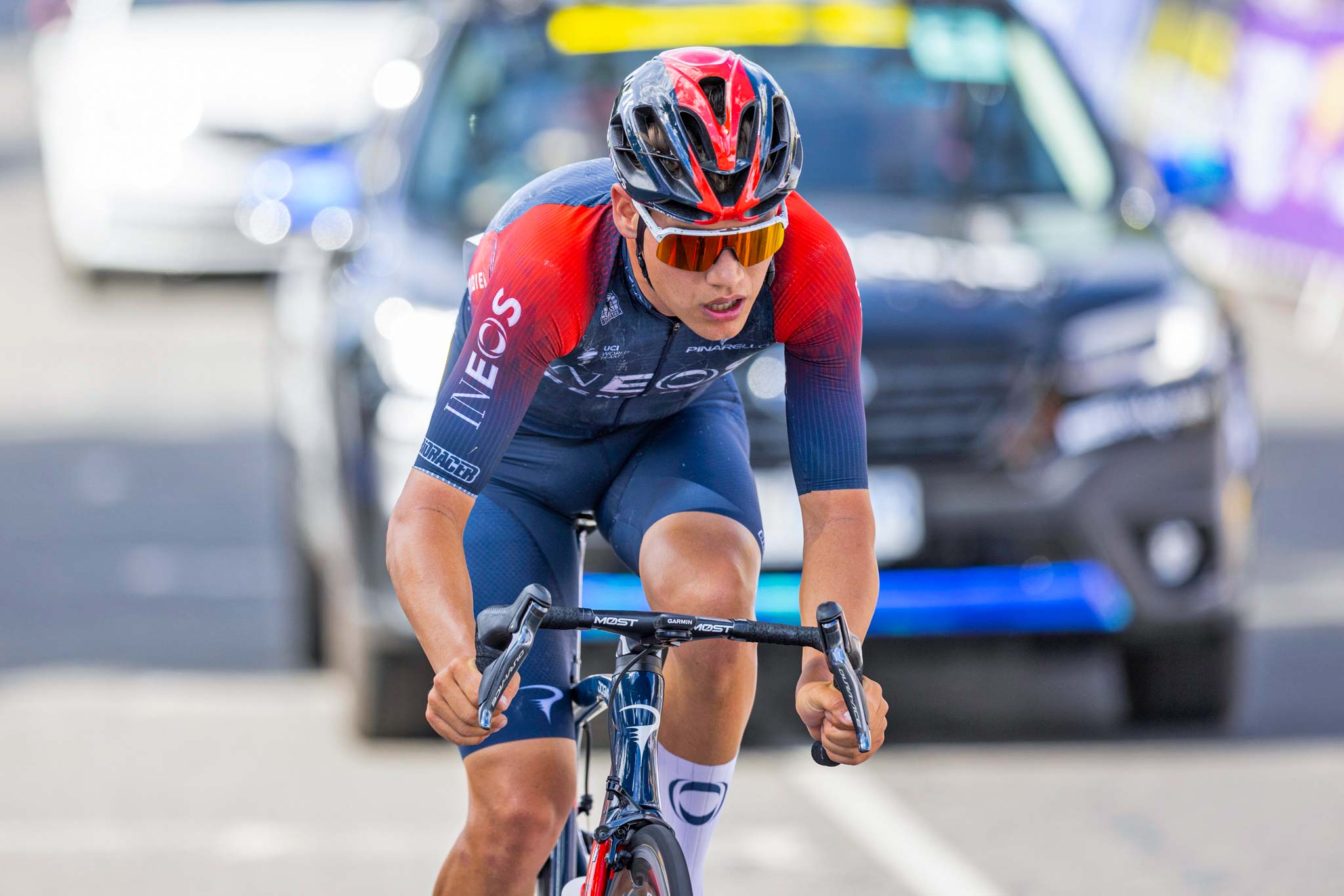 RIDE Media: While watching that drag race between you and Jimmy Whelan – which was a very big contrast of styles: him on a high cadence, and you pushing what seemed like a big gear – it seemed like you were confident that you had him in your sights. Or was there a bit of a panic because he was going so well?

Luke Plapp: “It was interesting. I knew I had to limit my losses or just hold the time gap up the climb. He’s a sensational climber so I wanted to limit his gains and use the second half of the course to nail back the time through the uni and around the corners, and I guess use my TT to reel him back.

“But once you’ve got that vision of him on the road ahead, it’s tempting to try and hunt him down. At the same time, it was pretty special to see Jimmy up there. He’s got a lot to prove, I think, to try and get back in the WorldTour. He’s an amazing talent and a class act.

“It was awesome to see him up there and show the world what he still is capable of and that he does belong in the WorldTour.”

RIDE Media: It is a brutal race and it always comes down to attrition – who can last the distance in the heat. I know that you like your numbers. Can you give us a quick overview of the highlights of your data?

Luke Plapp: “It wasn’t actually that high because of the heat. The race was quite slow for the first two hours actually. I think everyone was a bit concerned about the heat and how it was going to be towards the back end of the race. It didn’t peak at 30 degrees until five o’clock when we finished.

“So, it was quite an easy start to the race. And then, once we got going, we were around 120km deep and there was a bit of fatigue to consider. The numbers weren’t super high yesterday and, like you say, it’s a race of attrition the road nats, especially with the heat.

“You don’t need high watts to make it a hard race, the course just does the job and people just slowly drop off throughout the race.” 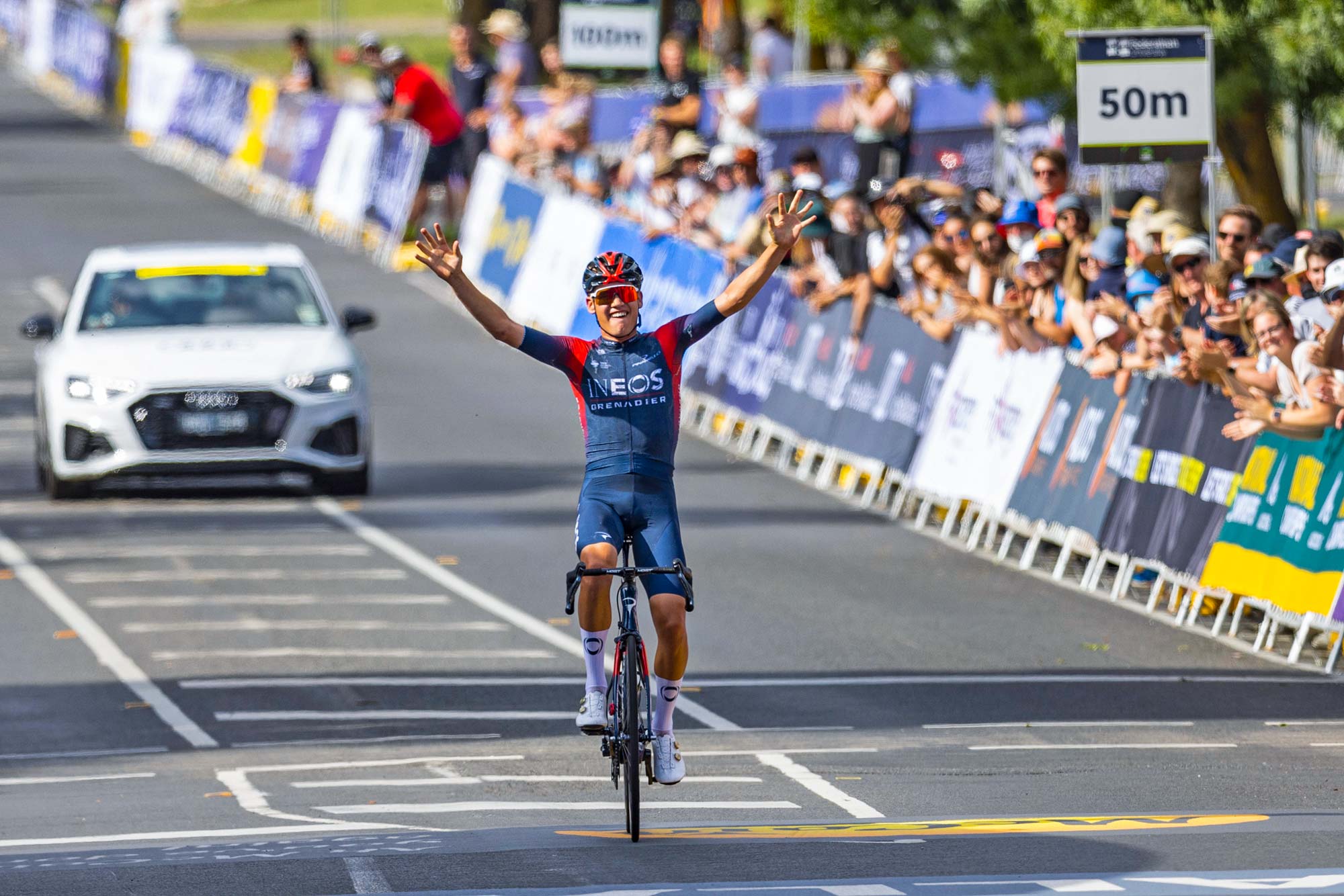 RIDE Media: You rode those pivotal last two laps in the big ring the whole time, is that right? It certainly looked like it by the way you were turning the cranks…

Luke Plapp: “Yeah, that’s just how I like riding and I think, with the track cycling background, I’m used to that higher torque sort of thing and pushing a bigger gear. At the same time, if I was spinning any quicker I probably would have cramped up.”

RIDE Media: We know what cramp can do on a course like that; when it hits, it’s time to stop… immediately. So, were you worried? Did you get some tingling in your legs or not?

Luke Plapp: “Yeah, definitely. In those last two laps, I was aware of it. I would have punched the climbs the last few times to get back a little time on Jimmy, but I knew that if I went any harder up there I was going to cramp.

“When I was on the flat it was alright because you’re a bit more fluid and you can pedal a cramp out a little bit easier. But every time I got out of the seat on the climb, I could start to feel it, so I had to quickly sit back down and hopefully hold off the cramp. 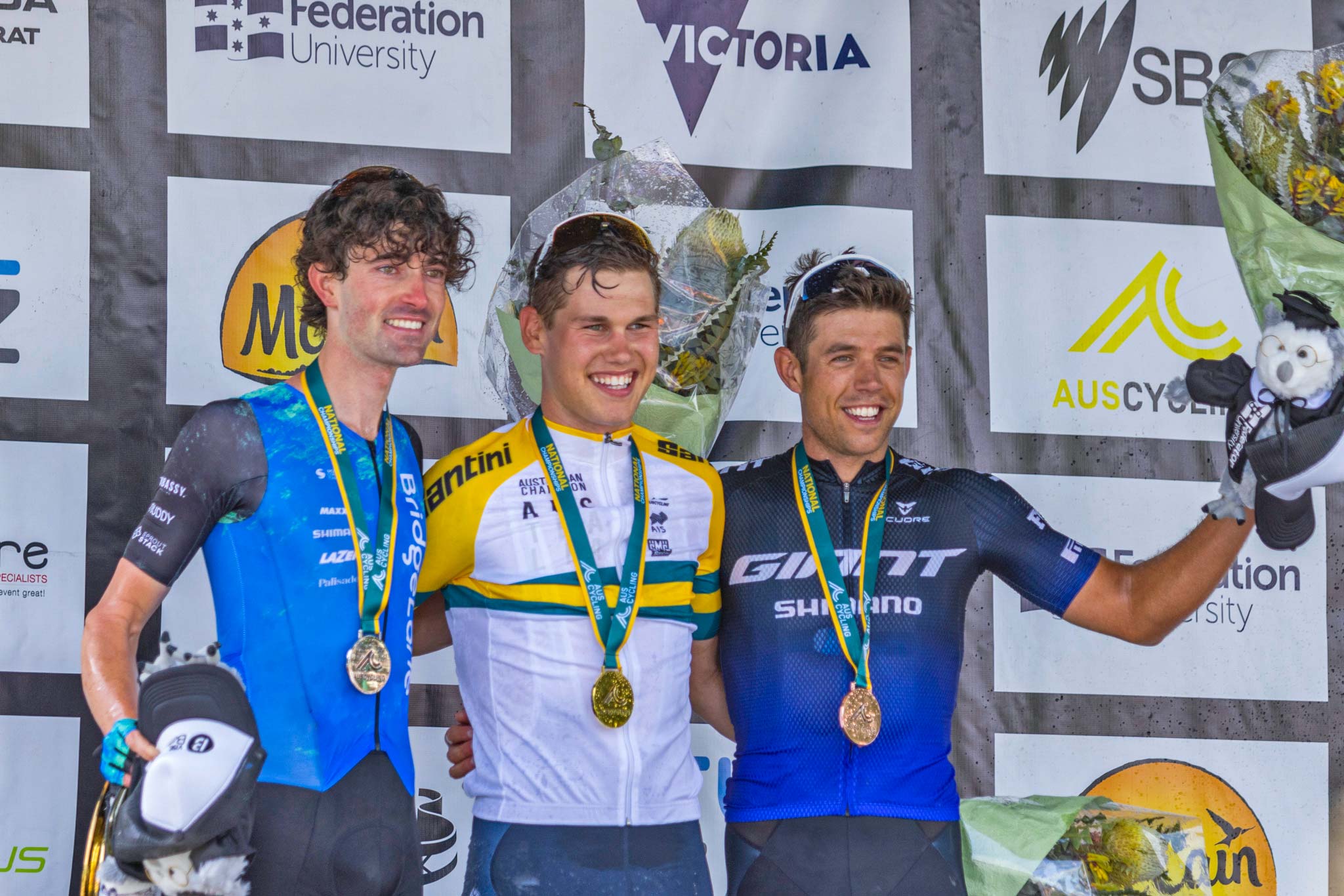 “I’ve got a pretty good nutrition plan for that race. We’ve learned a lot from (defending champion) Cam Meyer over the years, about what works and what doesn’t. So, we put together a pretty awesome plan for the day leading into it and race day. I was really confident with that and I did a bit of heat prep leading into it, so I was a bit more comfortable in the heat, which is nice because it did get plenty hot there in the end.”

RIDE Media: Do you feel like that was an early-season effort? In other words, are you coming into your form now or is that one of your peaks for the season?

Luke Plapp: “It was definitely a lot different prep to last year. In 2021 I came in going a lot better with more of a peak in form but this year I had one eye on the European season and I really want to make sure that’s where I am going well.

“I came into this with a lot of endurance kilometres and I think that actually paid off in the heat. I felt a lot better coming into the nationals this year, without a bit of top end speed but with the endurance that I needed to get the result done.”