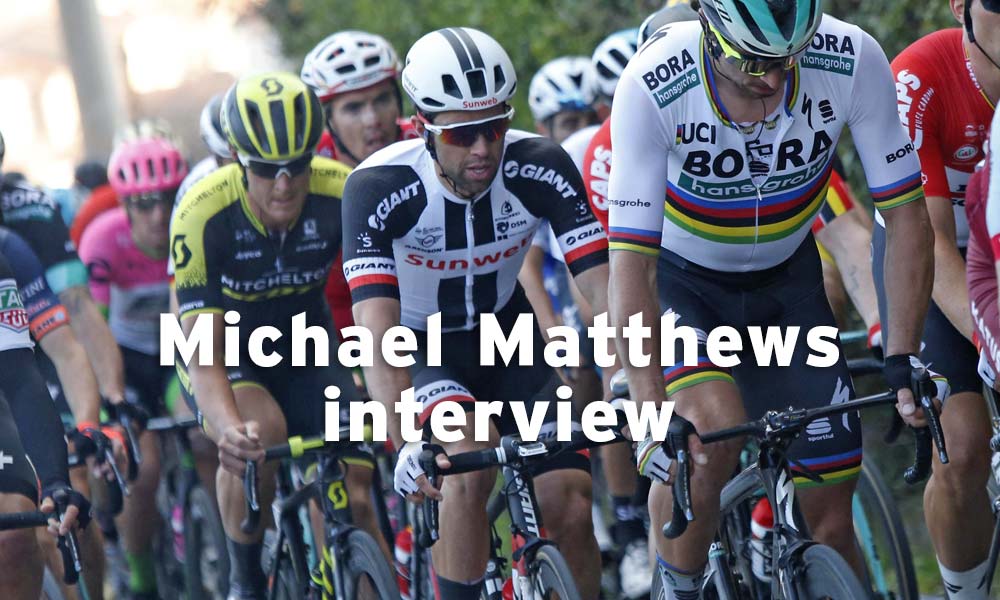 Interview – Michael Matthews, while out training

“I’m on the bike,” said the message from Michael Matthews, “but you can call – just riding easy.” We’d been aiming to speak for a few days and eventually he explained his 7th place in Milan-Sanremo… while he was pushing 350 watts on a training ride.

There’s been a lot happening in Michael Matthews’ life in 2018. Racing is what he’s paid to do but, by mid-March, he hasn’t done a lot of that. Still, it doesn’t mean he’s been idle. The 27-year-old is enjoying his cycling but there have only been two race days so far this year.

Matthews crashed in his first race of 2018 (Omloop Het Nieuwsblad, 24 February) and finished seventh in the next (Milan-Sanremo, 17 March). These days, he says, he tends to ride his bike with a smile… even if his job has a few nasty side effects: ie. a fractured shoulder bone from the fall in Belgium, and over seven hours in the saddle (much of it in the rain) on the road to Sanremo.

“I don’t do so many races in the season any more,” he tells me from the bike on the Wednesday morning after Milan-Sanremo.

“I think I only do 60 race days, so everywhere I go, I want to be going for the win. At the same time, I’m just enjoying riding my bike.”

While we speak, he’s riding up a hill on his way to meet Richie Porte and Simon Gerrans. The BMC Racing riders would become his training partners shortly after our interview session; they were off to do “the old classic Madone loop” and, Michael adds while he pedals along, “I’m looking forward to it.”

He’s on a climb with his headphones plugged in. Moments earlier he’d sent a text: “I’m on the bike but you can call,” reads his message, “just riding easy.”

We talk about Milan-Sanremo, the broken shoulder, the upcoming races and a few other matters and he pedals along. You can hear him breathing but he doesn’t seem out of breath. Still, I ask: what gradient are you and what’s your power?

So, we keep talking. He explains the near-300km race on Saturday, how he coped racing with a shoulder that’s still on the mend, and what he thought of Caleb Ewan’s second place to Vincenzo Nibali.

– Click the SoundCloud file to listen to the interview with Michael Matthews and/or read the transcript below. –

Listen to the interview with Matthews, click the SoundCloud link (above).

RIDE: I’m talking on FaceTime (audio only) with Michael Matthews. He’s on the bike in Monaco somewhere and I’m in Sydney. It’s a few days after Milan-Sanremo. Top 10. Again. How did you see the whole experience? Do you recall it now?

Michael Matthews: “It was different than the last few years. Obviously my preparation wasn’t perfect for the race. I was meant to do Strade Bianche and Tirreno but, after my crash in Nieuwsblad and fracturing my shoulder, it put me out of those races but it was up in the air to see how I was going to be actually feeling on the bike in such a long race. And such a prestigious race.

“I think to sum it up, it was nice to be up there in the pointing end but I was definitely missing that racing that I needed. But hopefully I can use Milan-Sanremo going into my next races.”

So, what is next on the program?

“This weekend I have E3 and Gent-Wevelgem so hopefully the hit-out on Saturday in Sanremo can give me some more ‘race’ legs for this weekend.”

And is Flanders on the schedule?

“Ah, not for the moment. I think, especially with so many cobbled races and my shoulder, the doctors are really trying to push me away from it a little bit, but I still have high hopes to do good things in the cobbled Classics this year. I was one of my targets for this year and I have really good shape going into them, so I sort of made the decision to do the cobbled Classics this weekend and then see, race by race, how the preparation goes.” 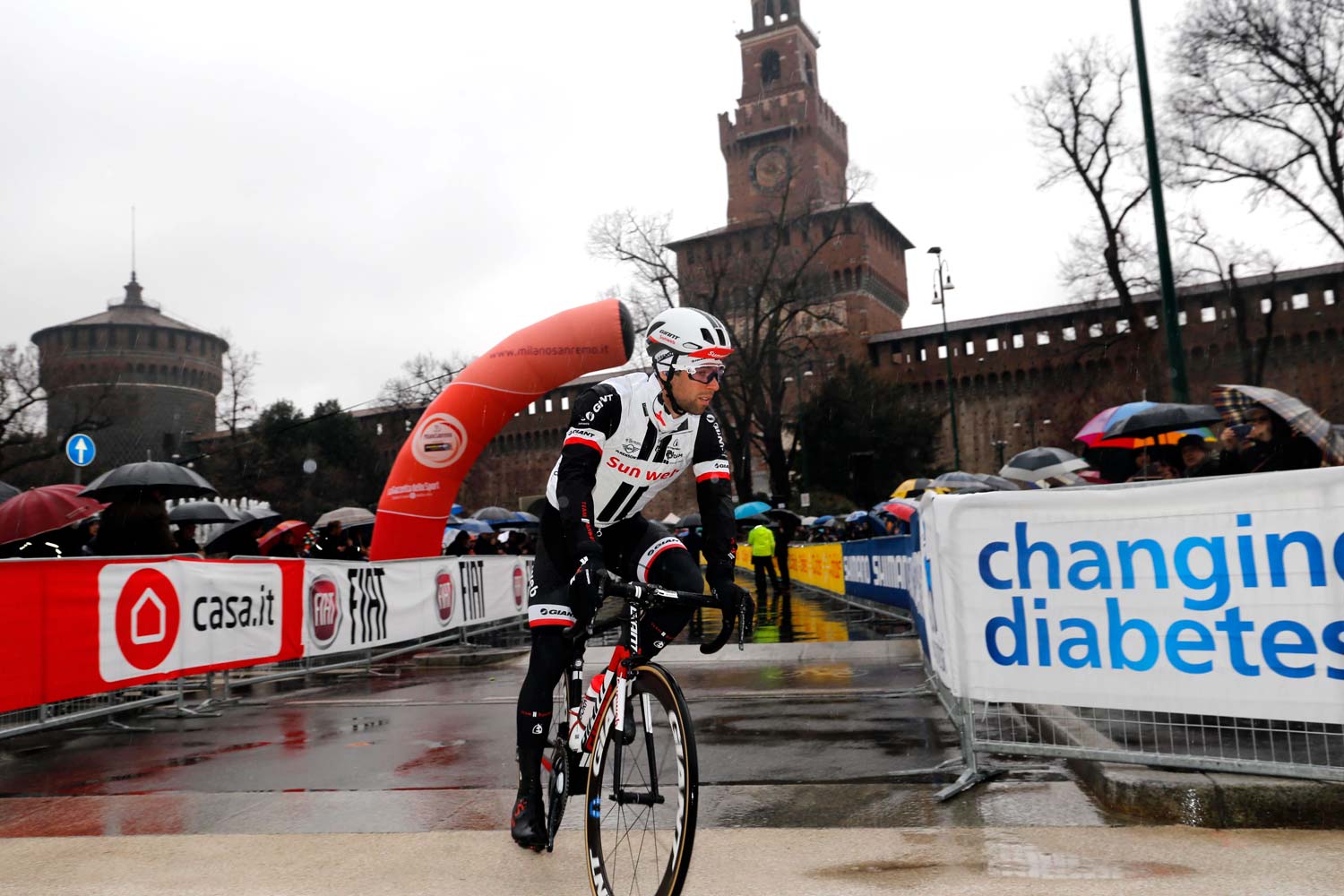 Ready for the start of his second race in 2018, Milan-Sanremo.

A lot of life changes… even since winning the green jersey. You’re a different sort of billing when you turn up at a race. Do you feel like you’ve got a different profile this year?

“Yeah, I guess so. I think, after winning the green jersey you don’t really… you can’t really go to a race and train anymore. You have to go there in top shape and that’s what I want to do in every race now.

“I don’t do so many races in the season any more. I think I only do 60 race days, so I think everywhere I go, I want to be going for the win. At the same time, I’m just enjoying riding my bike.

“The green jersey was one of my biggest goals of my career in cycling and to achieve it at 27 – or 26, I think I was back then actually – was pretty special. From now on, I’ve just got a big smile on my face enjoying every single day on the bike knowing that I have that green jersey at home hanging on the wall. It’s got my name on it, so it’s pretty special.” 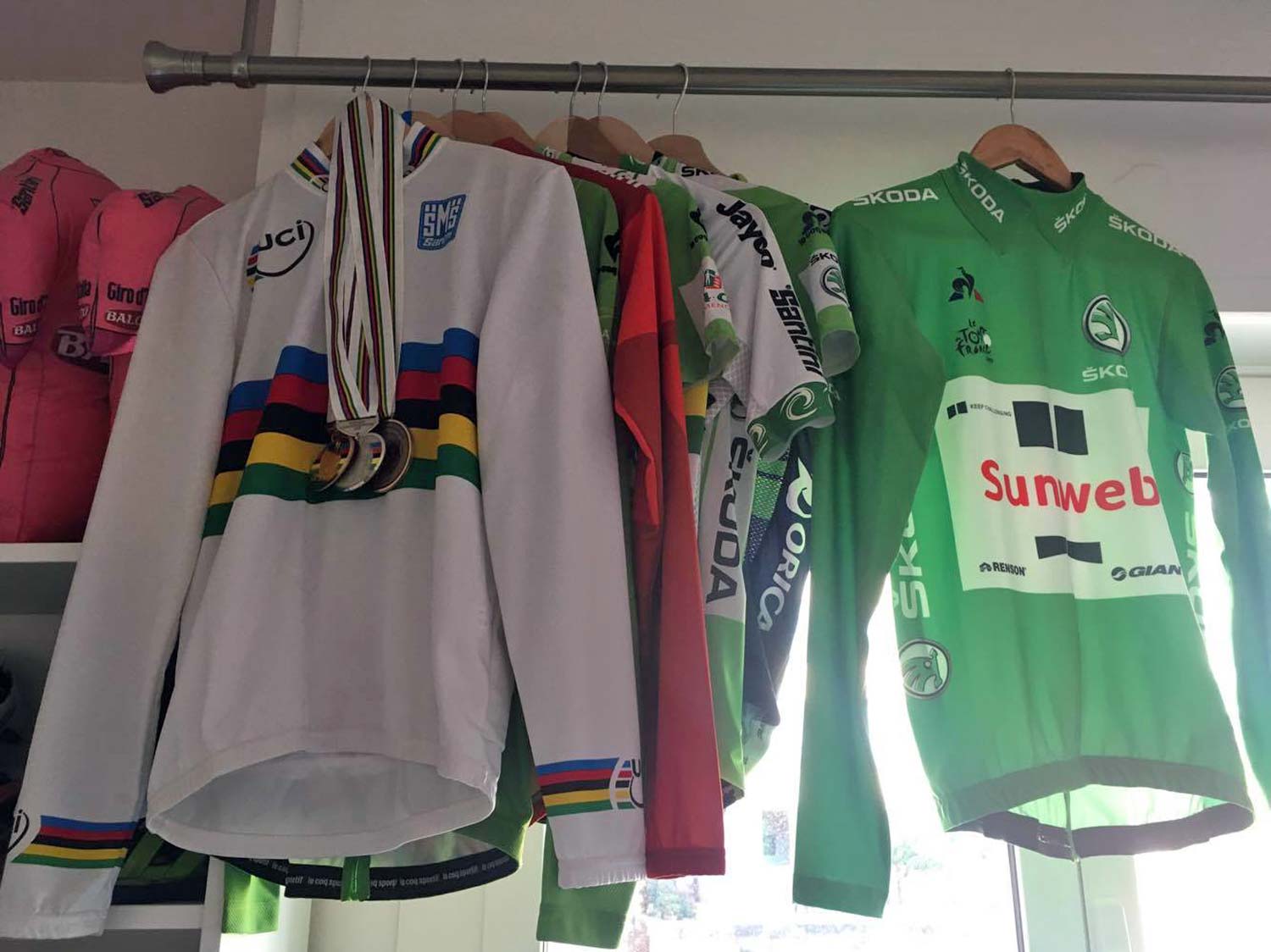 The wardrobe in the Matthews house… a decent collection of memories.

We can hear you’re pedalling away at the moment. What’s the setting where you are?

“I’m above Monaco. In between Monaco and Mentone. At the moment, the sun is shining. It’s beautiful weather and it’s a nice climb.

“I’m about to meet Richie Porte and Simon Gerrans for the old classic Madone loop and I’m looking forward to it.”

Okay, so what gradient are you on now and what’s your power?

It’s nice for you to take a moment to have a chat. We’ve talked about what’s coming up, but can you sort of talk me through some of the detail of Milan-Sanremo? A lot of people got to see a very exciting race and you were present in the chase. How did that feel?

“It was… like I said before, I didn’t exactly know what was going to happen in a final like that with such a headwind.

“I knew that, with my shoulder, a sprint finish was always going to be difficult because I didn’t actually do any sprint training before Milan-Sanremo, because I couldn’t pull on my handlebars.

“I was going to try and go for a bit of an attack but, with the headwind, it seemed to be really difficult. With Nibali attacking and me and Sagan and Kwiatkowski all sort of… I don’t know, ‘tagging’ each other out. I think, in the end, we should have all tried to help each other and then have a sprint between the three of us instead of a sprint with the peloton.

“But that’s the way racing goes sometimes; you have to play your cards and see what happens. In the end I think we just tagged each other out too much and brought all the sprinters to the finish.

“When it came down to the bunch sprint…? I’ve been on the podium before in Sanremo… I could see Nibali just in front of us with about 300 or 400 metres to go so I thought, ‘It’s all or nothing now. I go from 250 to go and just try and catch him.

“It was a win or top 10 and unfortunately it wasn’t the win but it was still a top 10 so I think, in the end, with no sprint training, to still have a really good sprint in the final and be able to attack on the climb? I have to be happy with the ride in general.”

There was a big Aussie presence and Caleb’s sprint was formidable. What do you make of how he went?

“I think it’s impressive. It seemed like he had a really good team there in the final to position him in the right spot and, with a rider like him, he needs the sprint. And a rider like the rest of us, we need to make an attack to make the sprinters work to get to the finish.

“With the headwind, it was really quite difficult to make it super hard for the sprinters. But I think was a really good ride – to get to the finish of a 300km race and still have a sprint like that? It’s nice. I think he’s had a pretty good season so far.”

Hey, thanks a lot for having a chat. I should let you go and join your training buddies.

“Alright. No worries. Thanks for the call and we’ll catch up again later.”

That’s good. Say g’day to Richie and Simon and have a good ride.