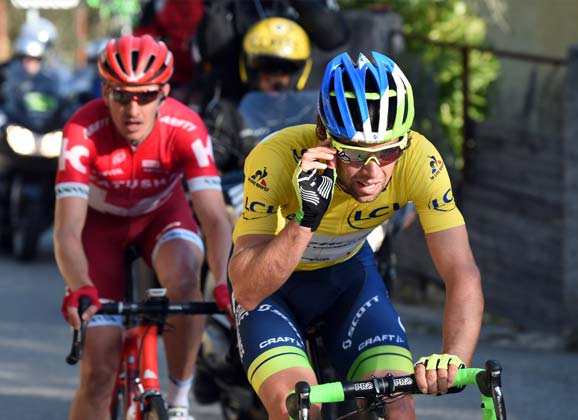 Matt White on Milan-San Remo: “We’re going in with one of the favourites”

This coming weekend marks the fourth anniversary of a monumental win for Australian cycling: it was in 2012 that the national champion, Simon Gerrans, claimed the first Classic for an Australian-registered team. Still known as GreenEdge (before the arrival of Orica as a sponsor), the successful debut at Milan-San Remo was a moment to savour.

We’re now used to the great ‘Backstage Pass’ clips created by Dan Jones but the first big hit for the series was in March 2012 when ‘Gerro’ beat Fabian Cancellara to win Milan-San Remo.

Remind yourself of the scene inside the team car… oh, it was fun wasn’t it?

There have been many celebrations for Orica-GreenEdge since but there’s something special about MSR.

Last year, Michael Matthews was third behind John Degenkolb and 2014 champion Alexander Kristoff but directeur sportif Matt White believes the 25-year-old can improve on that and deliver another win for the team.

We spoke with White on the Monday before the 2016 edition of Milan-San Remo and asked for a brief overview of what we can expect this coming Saturday.

Below is a transcript of White’s discussion with Rob Arnold… 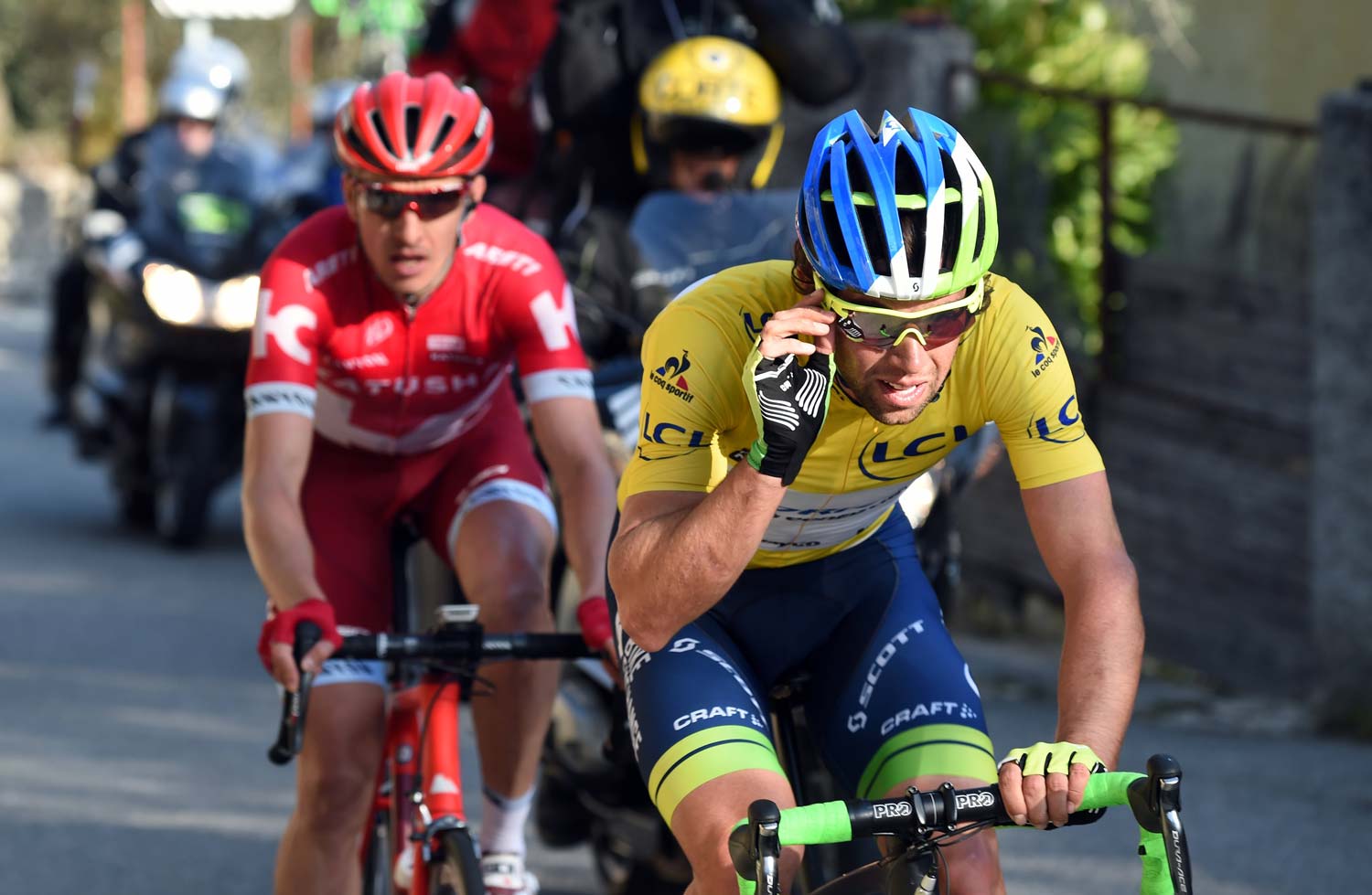 Michael Matthews in the lead of Paris-Nice last week. He won the prologue and a sprint stage before taking the green jersey home to Monaco. This weekend, he’ll be OGE’s protected rider at Milan-San Remo.

“We’ve got fond memories of this race…”

You’ve won this race before [as a directeur sportif, in 2012 when Simon Gerrans beat Fabian Cancellara for line honours]. What’s the plan this time?

“We’re going in with one of the favourites, that’s for sure, with Michael [Matthews]. He’s shown, off the back of his first race of the season in Paris-Nice, that he’s ready to go.

“But it is one of those races where, after six or seven hours, it all comes down to the decisions made in that last minute. The energy saved until that last minute will help decide the winner.

“The job will be to look after Michael as well as we can so he can be fresh to pounce and hopefully finish a step up the podium from his second place finish last year.”

Matthews really is a guy who is built for that race. He seems to last the distance well, he can climb, and he’s time trialling and sprinting well… Are you after a sprint? Is that the ideal circumstance for him?

“A reduced sprint would be the best case scenario.

“Michael is the kind of guy whose condition allows him to pass the Cipressa and Poggio with ease. If he can be there with a group of guys who aren’t the fastest guys there, that would be the best case scenario.” 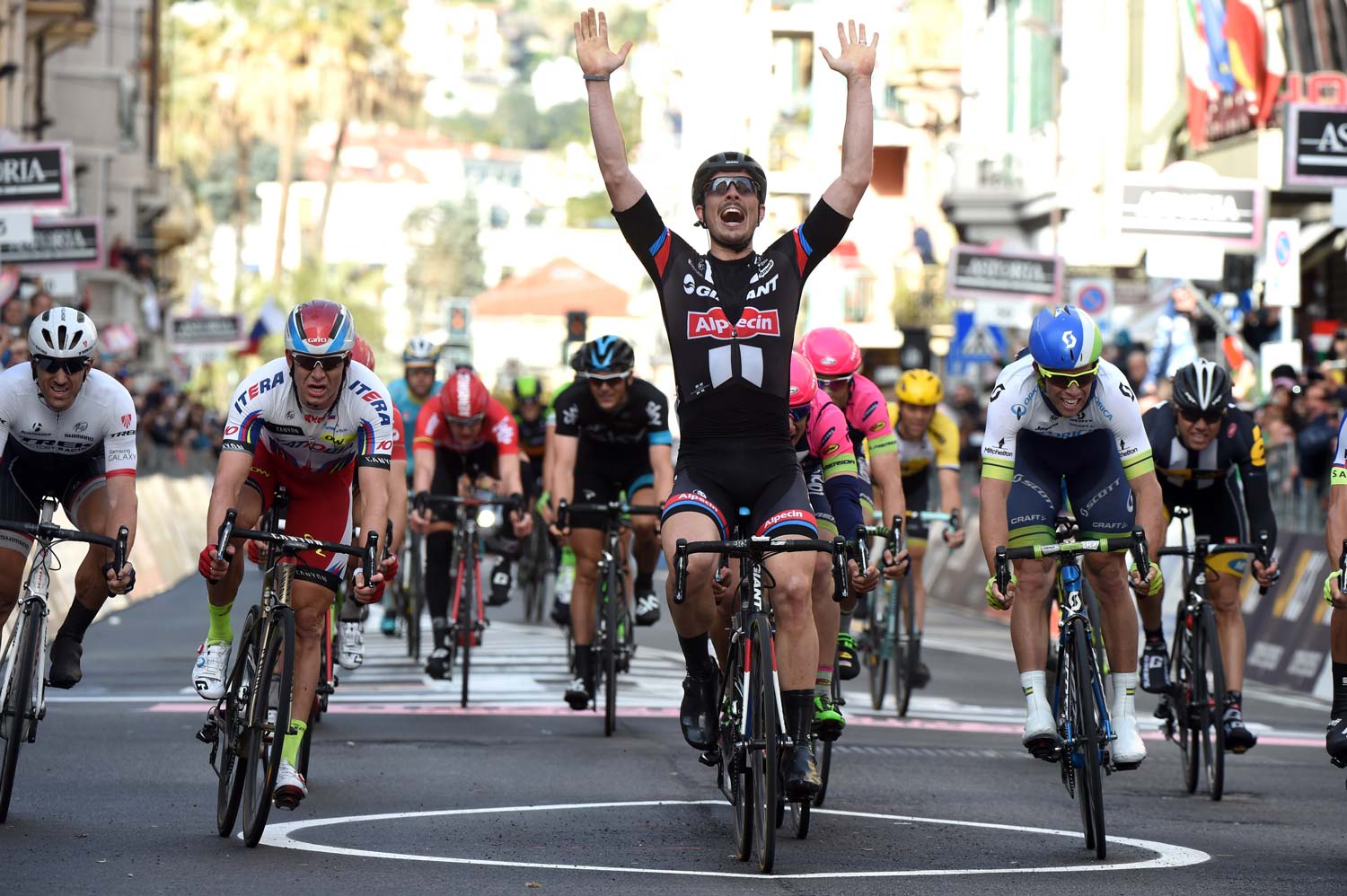 John Degenkolb takes the win in 2015 ahead of Michael Matthews.

You call the tactics yourself, is that right?

“We’re bringing in Simon Yates who just finished top 10 in Paris-Nice but if the pace is slow on the Cipressa, we will push the pace. We need to hurt the guys like [Alexander] Kristoff and [Nacer] Bouhanni, the pure sprinters, so that they’re not there in the final – or that we’ve given them a couple of upper-cuts on the Cipressa and that they’ll be tired for the final sprint. That’s our tactic.

“We’ll look after Michael as long as we can. The pace and the distance will soften up most of the guys but if the pace does start to drop in that last 50 minutes of racing, then we’ve got some guys who can turn the screws and that’s only going to help Michael’s chances.”

It’s a race with real appeal in the sense that people understand the rhythm of it and they understand the sequence with the Cipressa, then Poggio, then the descent… what do you like most about this one?

“I really have a passion for Italian racing in general and Milan-San Remo is the first big Classic of the year and it’s a beautiful race.

“It’s a long day in the office but my involvement in cycling – starting a career in Italian cycling – and this race being the first really big win for the team back in 2012 with Simon Gerrans, it means we’ve got fond memories of this race. 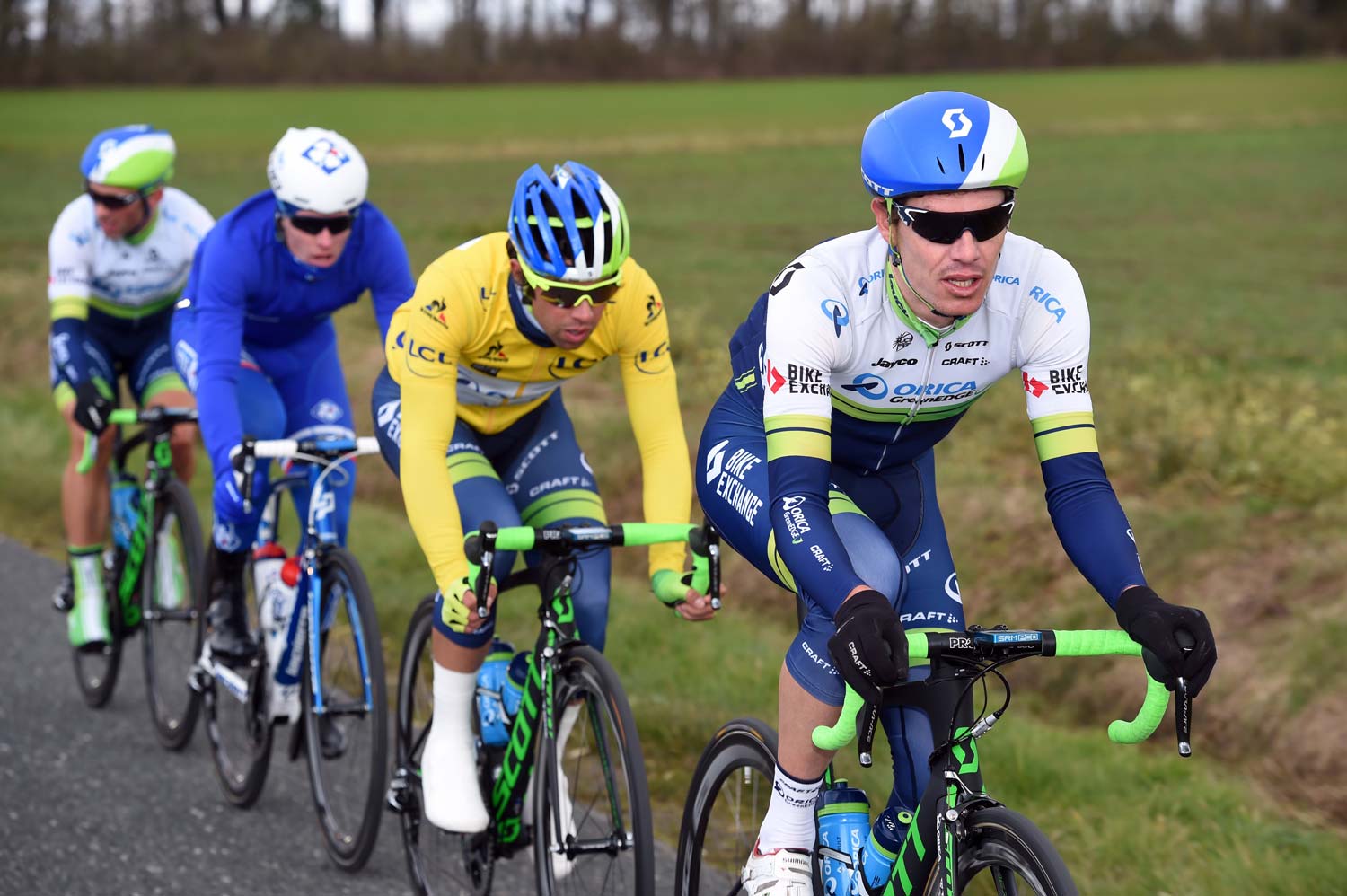 Daryl Impey (pictured leading Matthews during Paris-Nice) will be one of the key assets for OGE in Milan-San Remo.

All the best. Can you name the line up [for Orica-GreenEdge]? Do you know your guys yet?

“Ah, well we’ll be finalising in the next couple of days.

“We’ve got a group of guys and most of them know who is likely to be going to Milan-San Remo.

“The likes of Daryl Impey, Michael Albasini and Simon Yates are going to be crucial for Michael Matthews’ chances.”

And, just quickly given that you mentioned Daryl, he deserves a bit of a reference today after chasing after Contador on the final climb of the final stage of Paris-Nice. That’s quite impressive… did you see that at all in the highlights?

“I didn’t, alas. We were transferring after the stage in Tirreno-Adriatico.

“Daryl is in super form; he has been since the Tour Down Under and the plan is for him to come in at the start of the season really going well.

“For us he’s an unsung star of the team – he’s such a versatile rider.

“He climbs well. He’s part of our lead-outs. And he’s going to be very, very important for Michael’s chances on Saturday.” 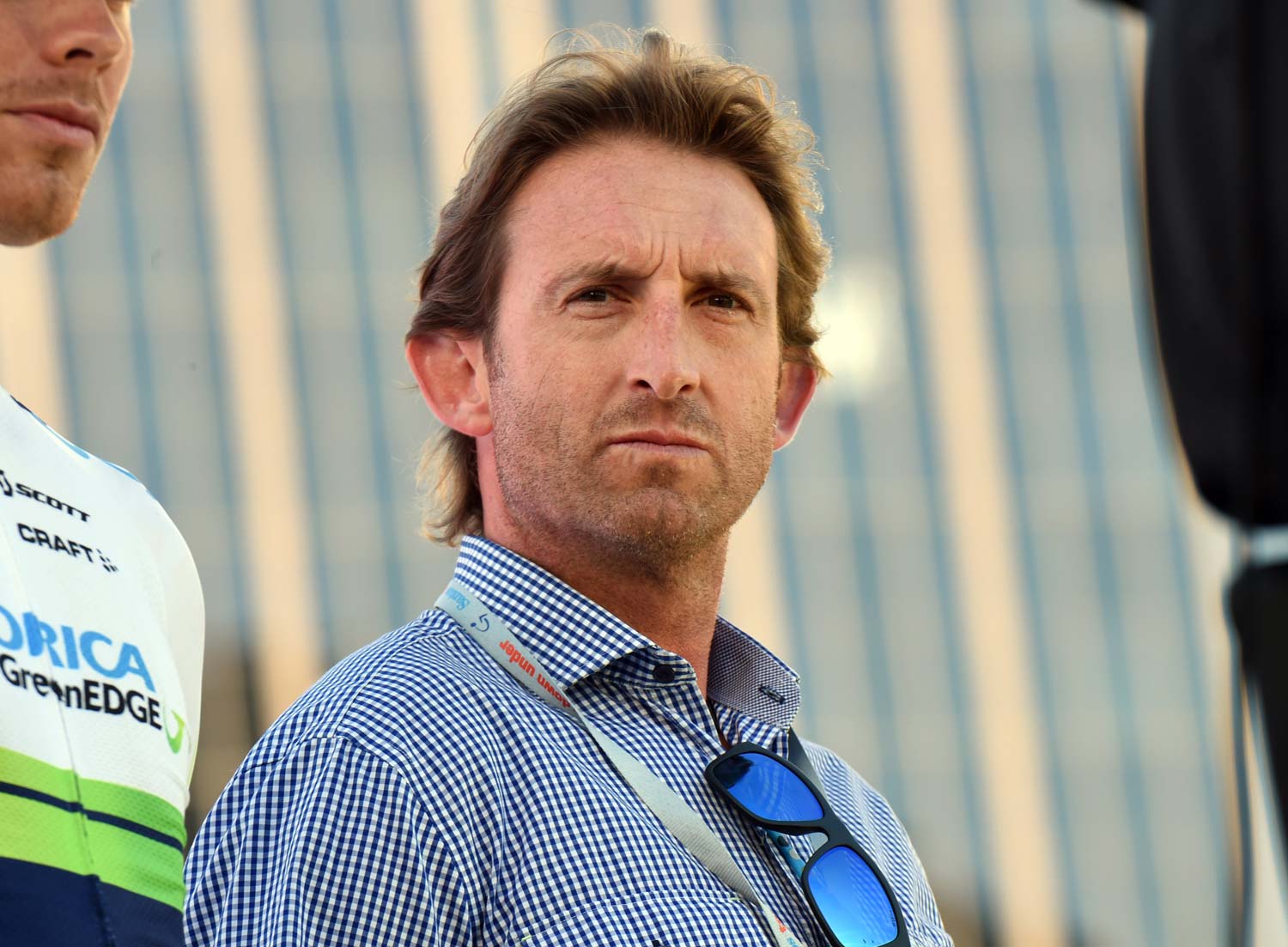 Matt White understands what it takes to win Milan-San Remo… and he’ll be calling the shots from the OGE team car again this year.