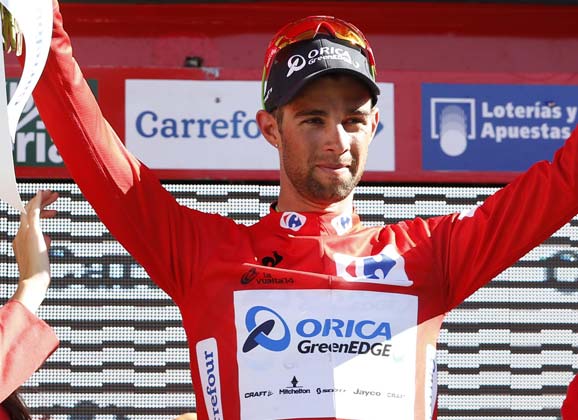 Michael Matthews interview: in red and thinking of a rainbow

The 2014 Vuelta a España started well for the Orica-GreenEdge team. Unlike the Tour de France of 2013 and the Giro d’Italia earlier this year, it did not win the team time trial but third place just six seconds behind Movistar was a good beginning to the final Grand Tour of the season. Then, at the end of the third day of racing in Spain, Michael Matthews finished off a fine team effort and won the stage ahead Ireland’s Dan Martin at the top of a climb.

Another Grand Tour, another stage win… and, like at the Giro in May, another chance to spend some time in the leader’s jersey.

There is another day for him in red at the Vuelta but he admits that he’s destined to lose the lead in stage six.

Rob Arnold spoke to him a few hours before the start of the sixth stage to find out about his Vuelta, his form, his hopes for the race, and his plans for the world championships.

Click the link below to listen to the brief exchange…

Are you chasing the rainbow jersey this year? Is that an option with the form you’ve got?

“Yeah definitely. It was always the plan, from the start of the year, to be really good for the worlds and be in my best shape for that race. All the preparation this year has been really good and hopefully I can keep excelling from here.

“I just came off an altitude training camp before the Tour of Poland and then came straight here [to the Vuelta]. I’m still in my ‘building phase’ at the moment – so if this if this is the building phase, by the time I get to the worlds I should be in top, top shape. I’m looking forward to it.”

Have you seen the course for the worlds?

“I haven’t actually been there but I have a video on my laptop. I’ve looked at that a few times and I’m going to go [there] straight after the Vuelta to check the course out for real with my coach, Brian Stephens.

“Obviously it looks a little bit different on TV to what it is in real life… I’ve been talking to a couple of the Spanish guys because they rode the national championships on that course and they say it’s not super-hard; it’s a course that I can get around…”