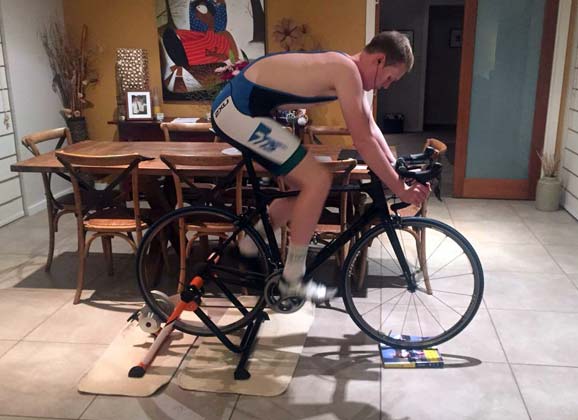 Earlier this year we reported on the challenges Zack Gilmore has been managing since being diagnosed with cancer almost a year ago. He was 16 at the time; a young man with a horrible illness – but he was bold enough to believe that he could beat what has been served up. “I’ve kind of gotten used to having the chemo,” he said in February.

Eight months on, he Zack had to return to Melbourne for more treatment. His blood reports weren’t too flash and doctors were concerned so he left Tassie and underwent some more tests early in September.

The image below offers some inspiration. He might not be winning national championship medals like he was at age 16, but Zack Gilmore continues to ride his bike – and, at 17 he does so for a lot of different reasons. 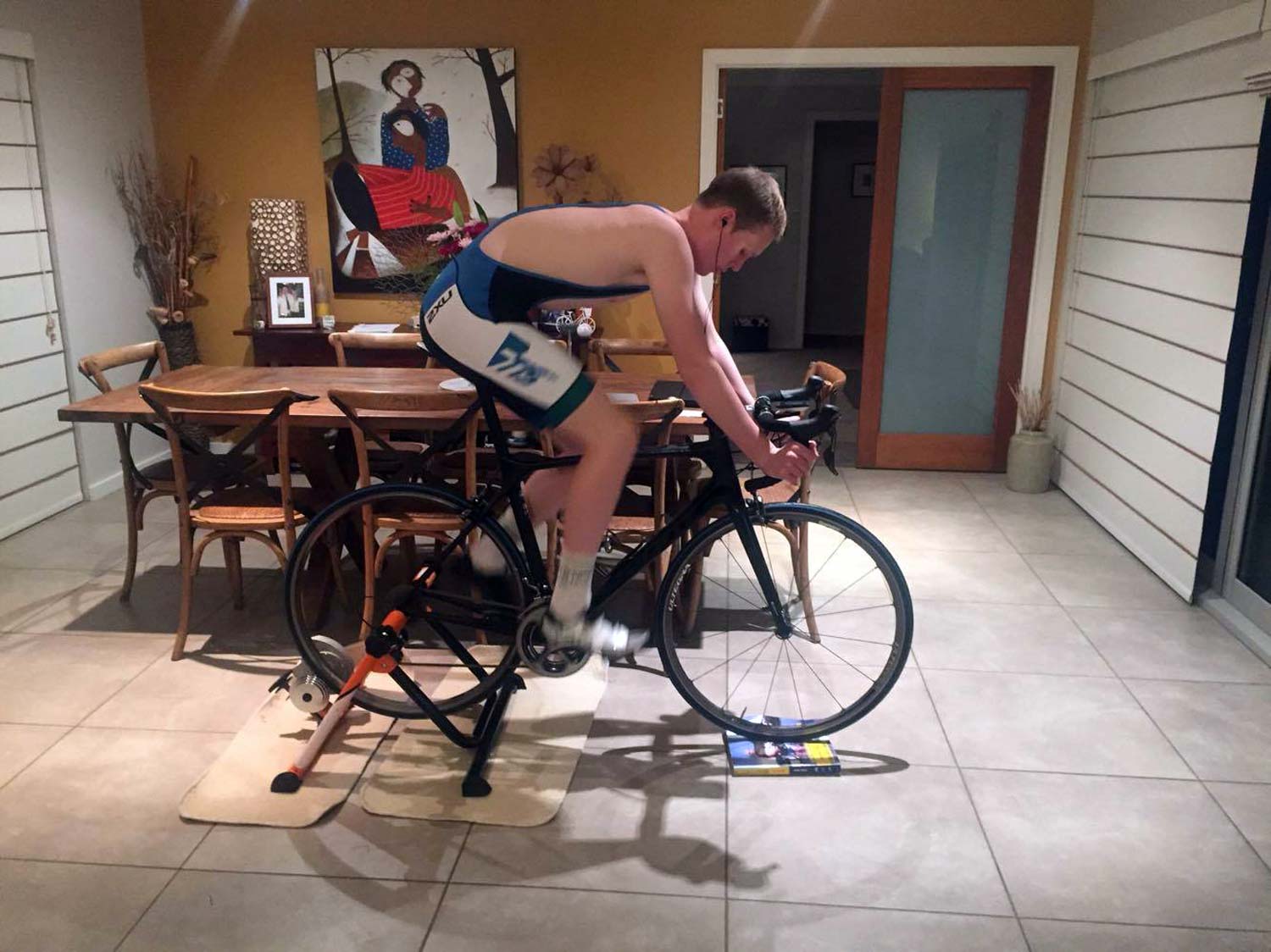 Click the Soundcloud file to listen to the interview and/or read the transcript below.

Another lesson in the ride of life…

RIDE: I’m catching up with Zack Gilmore who we spoke to probably six months ago when he was going through a course of chemotherapy to tend with non-Hodgkins Lymphoma is that what it was?

That’s what I was going to say – and I thought we’d do an update interview basically because you’ve been back in hospital earlier in September with some blood issues, but you’re now cancer free, is that what you said?

“Yeah I’m now cancer free. Trying to get back to normal.

“So in and out of school at the moment which is a bugger that I’m not there all the time I guess.

“Back on the bike training as well.”

It was this time last year you picked up a medal in the national criterium championships isn’t it?

“Yeah, I won a silver medal yeah basically a year ago now for the junior nationals that have just passed.

“Good to see the under-17 boys step up but I wish I was racing alongside with everyone I guess.”

…because we are a cycling magazine, I’m just curious: how important the bike has been in your road to recovery?

“For me, the bike has been my major motivator through all of this.

“When I was facing my tougher times my bike was helping me out the most.

“Whether that was me on my bike or just watching a bike race either of those really helped.”

I’ve been back on the bike for a little bit doing some indoor training. I realise, in the morning, if I get the endorphins rushing I feel better through the day. Is that how it helps you being on the bike or it’s just the act of feeling physical.

“I think cancer is more of a mental battle so being on the bike kind of just clears my head.

“I think a lot of other cyclists would be able to relate to that sort of feeling so I think that’s what I used more for when I was going through tougher battles.”

And have the doctors said that a more relaxed attitude is sort of going to help you through it a bit more or you’re just coming to terms with all the illness that chemotherapy brings?

“Yeah that’s it. You have to battle on with everything that comes at you.

“You don’t really know what’s going to happen from one day to the other so you learn a fair few lessons.

“One of my biggest lessons was just dealing with the patience of having to sit in hospital and wait for appointments and wait for good news or bad news – so, yeah just learn a lot of stuff like that during the process.”

Before this interview you said to me quite a remarkable sentence, you said you were ‘almost glad’ you’ve gone through this – so that you can try and educate others about what goes on with cancer. Can you expand on that? That’s quite a freaky sentence…

“Yeah, I’m well… I’m not really ‘glad’ I’ve been through it. I’m glad I came out really well and [am] still motivated for cycling because I kinda want to be a role model for other kids [who] are going through the same situation I’ve been through – just to show them it is possible to get back to where you were.

“I want to try and teach people who don’t know much about cancer how it all works but I think that’s one thing I can work on for the future.”

Can you give me a little example of what you would tell a 16-year-old like yourself who just got the diagnosis for the first time now that you’ve gone through it and you’re still going through it. What would you say to them on that day of diagnosis?

“I kind of doubted what the doctors were telling me.

“I’d tell [others]: ‘You’ve just got to push through it and get back to normal the way you know best…’ basically.

“You’ve only really got one option when the doctors tell you something like this and that’s to fight on.

“’You don’t just pack up the bike basically and not do anything about it – so you keep riding on,’ I’d say.”

“At the moment I’ve lost a fair bit of weight, especially muscle wise – but I’m just trying to get back into things so hopefully back into normal shape.

“I’ve lost a lot of colour – like, tan wise – because I was in hospital for so long but just trying to do all normal things just try and get back into fitness.”

Your father, we’ve known him as a madison world champion and we’ve known him as an Olympic coach and all sorts of things. He’s been away for a long time this year. What sort of contact did you have with him and how did he coach you through that in his absence, while he was in Rio?

“I think personally this has changed the way dad and I view sport, like it’s – before I used to think sport was everything.

“But now I’ve come to learn family is everything – especially for me and my dad and the rest of my family and he was very supportive all the way through.

He was going through the strain of probably an Olympics campaign that didn’t pan out the way he would’ve liked and he’s talking to you. What sort of things were you talking to him about? There’s been a pretty common theme after Rio and that is it is ‘just sport’… and I think you just highlighted it just then saying ‘family is far more important than sport…’ What does he give you when he’s away to make you sort of realise that you’ve got to go through another round of chemo and how does help you through those moments?

“I think at that point we sort of knew what was going on so he’s just reinforced the things he was teaching me before hand which was just keep fighting on.

“He would be able to calm me down if I was really nervous about something by talking about him being away and all the cool things he was seeing like the boys in the TP (team pursuit).”

“He’s learned to know what calms me down and those sort of things but other than that we’ve really learnt how to face these things together really.”

It’s an obtuse question but people – especially in an Olympic year – they put a lot of weight into the power of coaches. We’re into finals season [for] the footy and we know that the coach gets a lot of credit so, given that your father is a coach and you’re a young bloke, I just was curious if he might have some words of wisdom that carried you through your darker moments?

“It’s kind of hard to talk about it as dad is my coach as well as being my dad – so it’s hard to look at him as my coach when I’m not really on the bike, if that makes sense.”

Totally. Makes a lot of sense. I guess my question was a little bit silly and frivolous but it’s really great to be talking to you on what you call the ‘other side’… like you’ve come through recovery. But you explained to me that you’re now on an oral chemotherapy treatment. What’s all that about? You’re through the cancer but you’re still on chemicals?

“The oral chemo I reckon people wouldn’t understand as much but it’s basically: once you’re finished your main intense chemo you go onto oral chemo.

“That’s to stop the cancer from relapsing and that can go anywhere from 18 months to three years for me and hopefully if all goes well I’ll be done fairly shortly but it’s just another battle I have to continue on with.”

Do you know what those drugs are, what you’re taking now?

“Um, I’m not too sure I do know there’s one that’s I get affected by the most which really knocks my bloods around.”

And that lowers your red count – or your what does that do?

“That one knocks my neutrophils down which is the part of the blood which helps prevent infections basically and it does a whole lot of other things as well.

“But that’s the main issue with me at the moment I’ve got other tablets as well which support that and do other things.”

I guess it’s the other side of cancer we don’t often hear about. We hear about the hair loss and the injections and the chemo but this is what you called – when we spoke last – ‘the maintenance’ that you’ll be going on with for months?

“Yeah. And this is where I was saying before: this is where I’d like to help people understand more about the cancer because maintenance isn’t as easy as I think people think it would be.

“They might see me on the bike but when I head home I’m definitely needing extra recovery time basically.”

So how do you manage that? Basically get to bed early I’d imagine?

“Yeah definitely.  A lot of down time on the couch and resting up really.”

“Not yet, I still have a lot of goals for the bike I still want to see if I can get back to where I was and until that point, until I know how I’m going to be on the bike I’m just going to go through my schooling and education the way I was planning to before hand.”

…I think you would’ve learnt a lot and thanks for sharing some of your story.

I think that one of the lessons that comes out of all of this is that we spend a lot of time giving praise to people who win bike races but you’ve probably met a few medical staff that deserve a lot more applause than anyone who wins even the biggest of bike races. What did you make of the nursing staff at the children’s hospital in Melbourne and what were the strong lessons they gave you during that time there.

“All the nurses and doctors are amazing without the support of people like them there’d be no chance of people getting healthier and I have to give my biggest gratitude to them for getting me through it as well as my family without them I don’t know what position I’d be in now.

“There’s a lot of different people to thank really.”