A lack of racing hasn’t quelled Sam Welsford’s competitive spirit. He had planned a long training ride with mates on Saturday… and, although they were riding in their respective homes, the challenge grew, and grew…and grew some more. 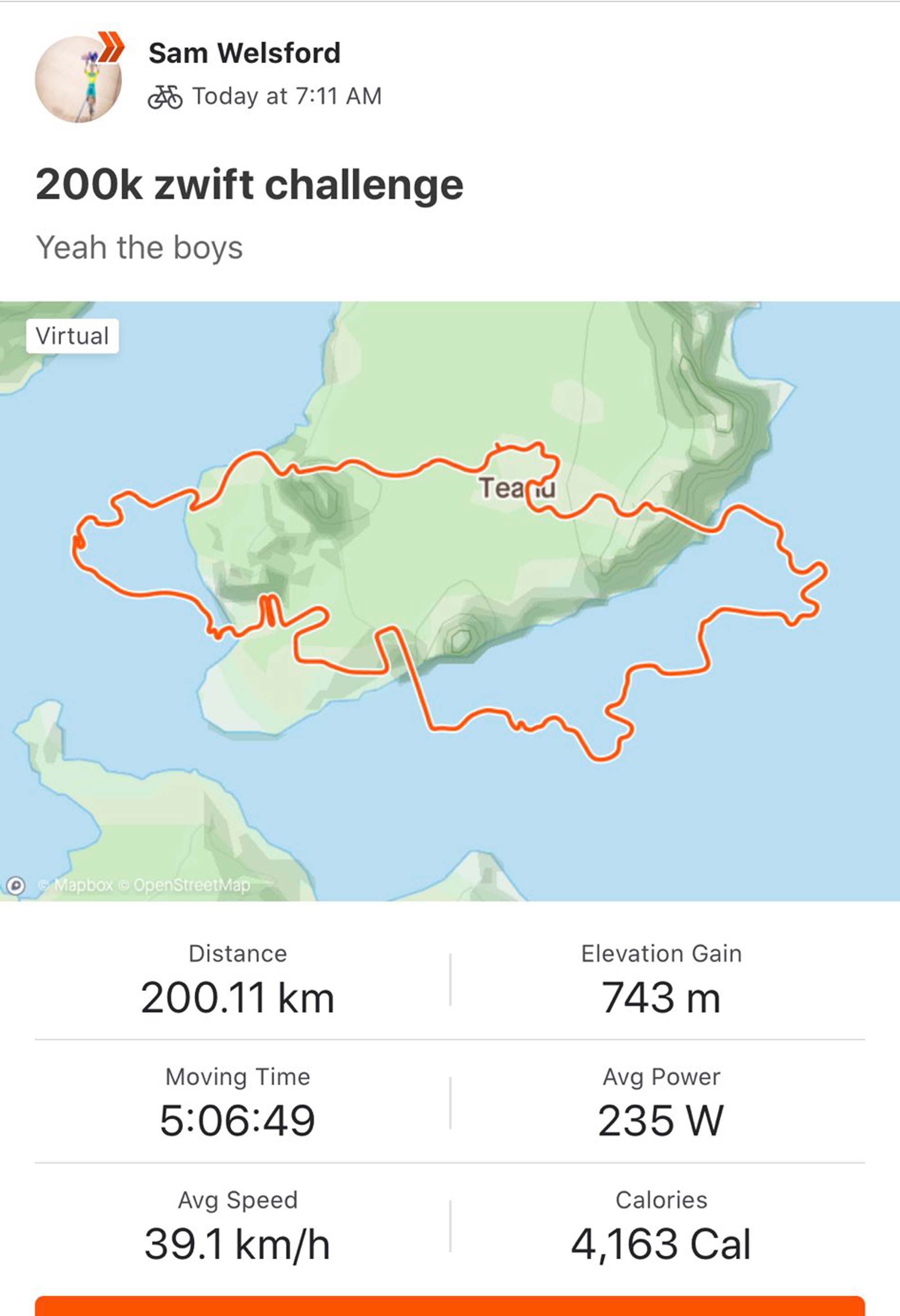 Sam Welsford is widely regarded as one of the best track riders of this generation. He’s been part of a few world record breaking team pursuit rides and, in 2019, won a scratch race world title only moments after winning gold in the TP.

With a race weight of around 83kg, however, he realises that racing on Zwift has some additional challenges. It’s difficult for the powerful rider to take on the lightweight climbers but that doesn’t mean he’s shy of a challenge.

Yesterday, Welsford set six bottles up on his desk, made himself a few sandwiches, clipped into the pedals and set off for a ride that went nowhere but knocked around 3kg off his bodyweight.

After a 200km session on the home trainer, his longest to date, he took a call from RIDE Media to talk about the experience.

– Below is the transcript of a Q&A with Sam Welsford. – 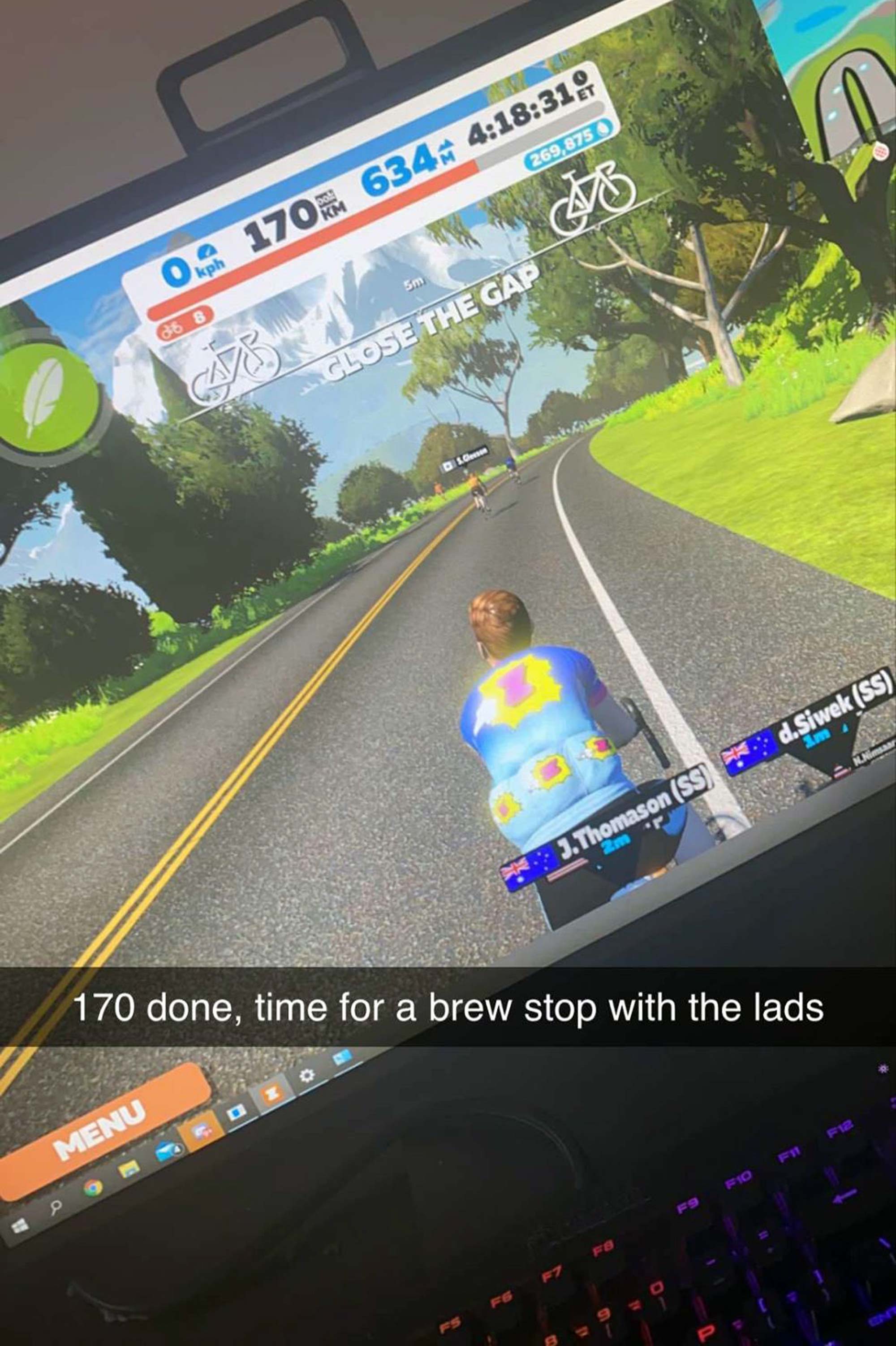 RIDE Media: It’s Sunday 5 April 2020 and ordinarily that would have been a time when Sam Welsford was ramping it up with his work on the track in pursuit of a gold medal in Tokyo 2020. But that’s been pushed back, and we all know the reasons why.

This morning I saw a tweet from Sam explaining that he’d done 200.1km on Zwift at an average of over 39km/h… not a lot of climbing (743m in total) but it is a pretty big effort and it begs the question: how are you feeling right now?

Sam Welsford: “It was a big day yesterday and I’m feeling quite cooked today. I’ve just had a light, little brew-shop ride to roll out the fatigue from yesterday.”

RIDE Media: For a guy who is really well known for going four kilometres really fast, 200km on the home trainer must have been pretty exhausting. Can you talk me through what went through your mind? Was it always your intention to go that far?

Sam Welsford: “Some of us guys, our crew in Adelaide, had an idea to do this 130km group ride that was on Zwift in the morning.

“We thought it’d be pretty epic to try and do 200km on Zwift, because you’re always on the pedals [ie. not much freewheeling] – you know, you’re on the ergo…

“We didn’t do much climbing, but we were on the pedals the whole way and I think that showed. The average was about 235 watts, or 240. So, it was a big day.”

RIDE Media: Can you go through any of the other numbers? You would have had all of the Zwift data at your disposal. Can you remember much of it?

Sam Welsford: “I know the first two hours was meant to be in this big bunch ride but, unfortunately, my internet dropped out at the start of that… so, I actually got spat out the arse and I was just riding with about three or four other guys for about maybe another 70km.

“I did five hours and six minutes, total riding time, and I got a 250 TSS from it (Training Stress Score).”

RIDE Media: Did you weigh yourself before and after?

Sam Welsford: “I think it was a variance of about three kilos, or two kilos.

“It’s amazing how much fluid you lose through sweat on Zwift.

“You’re constantly just putting out power, and you need to so that you can hold the wheel or move up the bunch.

“I had the air-con blasting in my room and I was still dripping. I was soaked by the end of it. My knicks had all the salt on them.

“It was actually quite interesting, because we knew we were doing such a big ride, before it started we got all organised. I had about six drink bottles on my desk. I made a couple of sandwiches for the ride… if you have to get off, you lose a lot of time, so I just had my stash there so I could keep chipping away on the ergo.”

RIDE Media: If we consider a couple of the guys in Europe who are showing pictures of themselves training on their balcony, it seems like the ironing board is the table of choice for the indoor trainer station… what’s your arrangement?

Sam Welsford: “I’m just resting my PC on my desk.

“I need to do a big shout-out to Wes Salzberger and Kierin Lewis for hooking me up with some Ant+ equipment so that I could do it all through my Windows 10 because I was having a lot of issues. But now I could do it all… and now I could probably stream some Zwift races too.

“I had the idea to stream some Zwift races a little while ago, but I was getting put away – I was getting spat out the arse and finishing outside the top 10 because they’re just so hard for us big guys.”

RIDE Media: It is a real power-to-weight game isn’t it? What’s your current race weight?

“I don’t really weigh myself that often but because the whole Zwift thing is on watts per kilo, you have to be aware of it, and you have to push a big number to keep up with the skinny guys.”

RIDE Media: All of the advantages of being light on the bike apply in the virtual riding world as well. So, tell me: when are you going to take on Alpe du Zwift? Is that something you’ve got your sights on?

Sam Welsford: “Yeah, it’ll be a good little test to do.

“The long ride was a good way to challenge myself during this tough time at the moment.

“Doing something like this, for me, is pretty big and pretty crazy.

“I’ve never done anything over, probably, two hours on the ergo, so to push five hours and challenge my mental strength during this time was pretty special for me.

“Hopefully it can motivate others to really just test themselves, to keep setting goals, and to keep striving for things – even though there’s no racing.

“It’s hard to set goals at the moment and I think it’s just good to set little fun goals that you can do with your mates.

“I think Alpe du Zwift will be my next challenge.

“I don’t know how I’ll go up there, but I saw that Cameron Jeffers did 220km yesterday and think he did 8.5 ascents of Alpe du Zwift, so it was 9,000 metres of climbing. That’s insane…!

“Maybe I’ll do a couple of those climbs in one day, and that’ll be really hard for me as a big guy but I think it’ll be good fun.”

I wonder if you’re a little like Anna van der Breggen who, I think, has a special avatar. Do you have a sleeve tattoo on your Zwift avatar?

Sam Welsford: “That would be really cool! I wish I could actually have that. Maybe I’ll message the Zwift guys and see what they can do.

“Not many cyclists in the pro peloton, or at my level on the track, have sleeve tats, so it’d be good to see if I could arrange one on my avatar. That’d be awesome.” 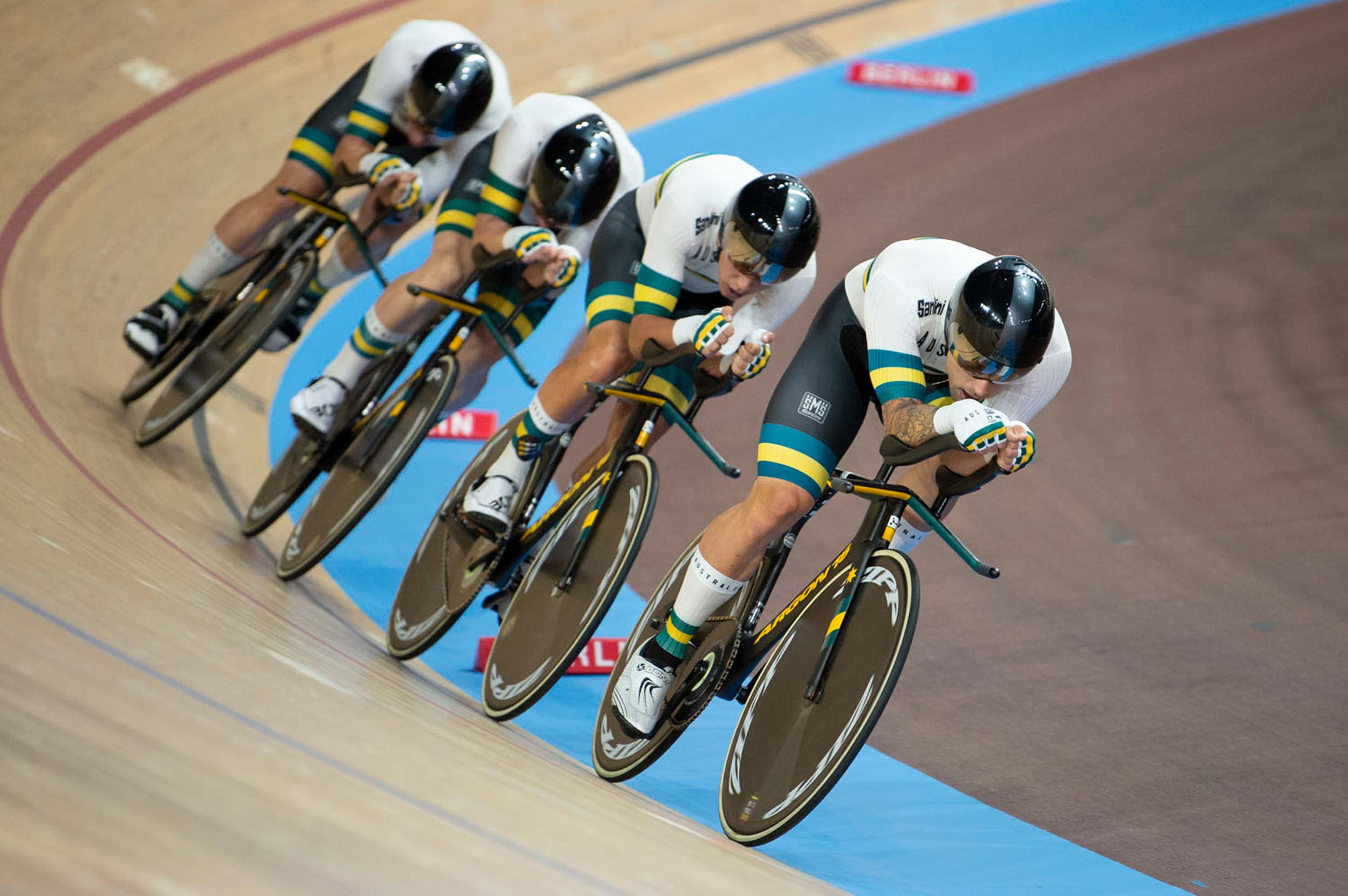