While waiting for the start of the Schwalbe Classic, the prelude race for the 2020 edition of the Tour Down Under, Darren Hicks rode by wearing a rainbow jersey. I wanted to find out more about his cycling and his world championship winning conquests.

With absolutely no notice, and while the 35-year-old was still sitting on his bike after contesting a street race in Adelaide, the Paralympic cyclist agreed to an utterly impromptu interview to tell some of his remarkable story…

The audio quality of the video isn’t great but Darren expressed himself with honesty, integrity and answered a few rather blunt questions about his cycling, his bike, and the impact of an accident he had in 2014.

It is a great pleasure to share some of Darren Hicks’ story.

– Click the link above to watch RIDE Media’s interview with Darren Hicks. –

“We have the track world championships in Canada from the 30th of January until the second of February,” says Hicks at the start of a quick interview in the Tour Down Under Village. He was there because he’d just finished racing on the same circuit in Adelaide that was used for the final stage of the Santos Women’s Tour Down Under and, later, the Schwalbe Classic.

Hicks is a double world champion from 2019: first in the individual time trial on the road and winner, with a world record time (3:33.2) for the individual pursuit, C2 para-cycling category, on the velodrome.

When we finished speaking, he set off to pack his bags for Canada.

He is going to defend his pursuit world title and get in some valuable race days in advance of the Paralympics later this year.

Early in our chat, I explain that – although his times are impressive for any cyclist – the “punchline is that you’re riding with one leg”. Immediately I tell him that “punchline” is the wrong word. He laughs it off and, I hope, understood that I didn’t mean to be insensitive.

He goes on to explain some of his racing conquests and it becomes apparent that the Paralympics in Tokyo beckon.

We had just met. I’d not seen him race, but he was certainly a popular figure in the ‘Village’.

The rainbow jersey, of course, attracts attention, but it’s the sight of a champion with one leg that probably earns him more attention.

He is building a solid fan base thanks to his racing and although he had dabbled in BMX and other cycling forms as a kid, it was a car accident and the subsequent injuries that prompted him to consider racing again after a life-changing moment in 2014. 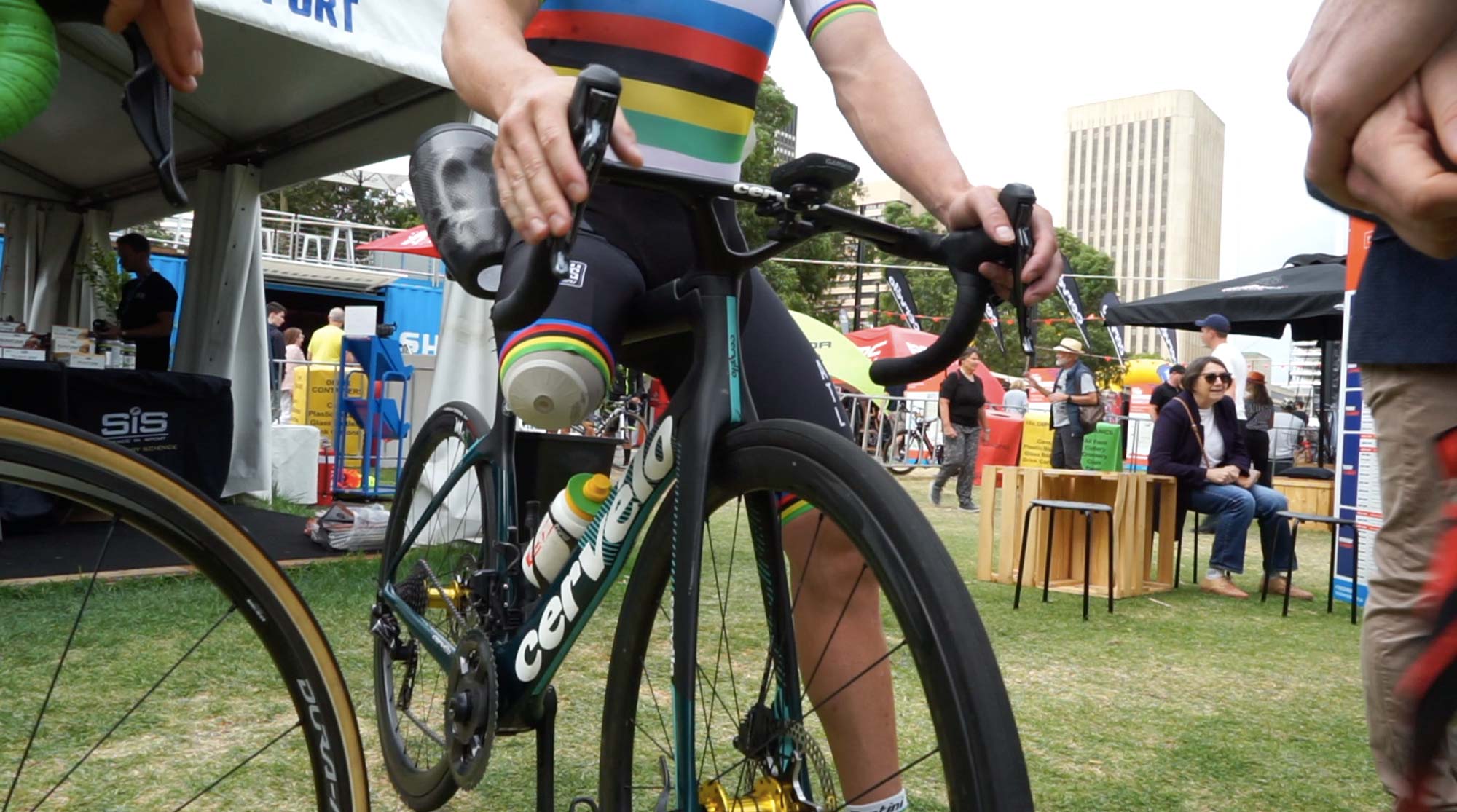 Later I throw in another interviewing faux pas after he explains his wattage for the world record ride.

“Holy dooly,” I reply. “Have you got calves of steel?”

I quickly do the math, and correct myself, “Or, calf of steel?”

I knock out the plural, and he rolls along with the conversation not missing a beat. 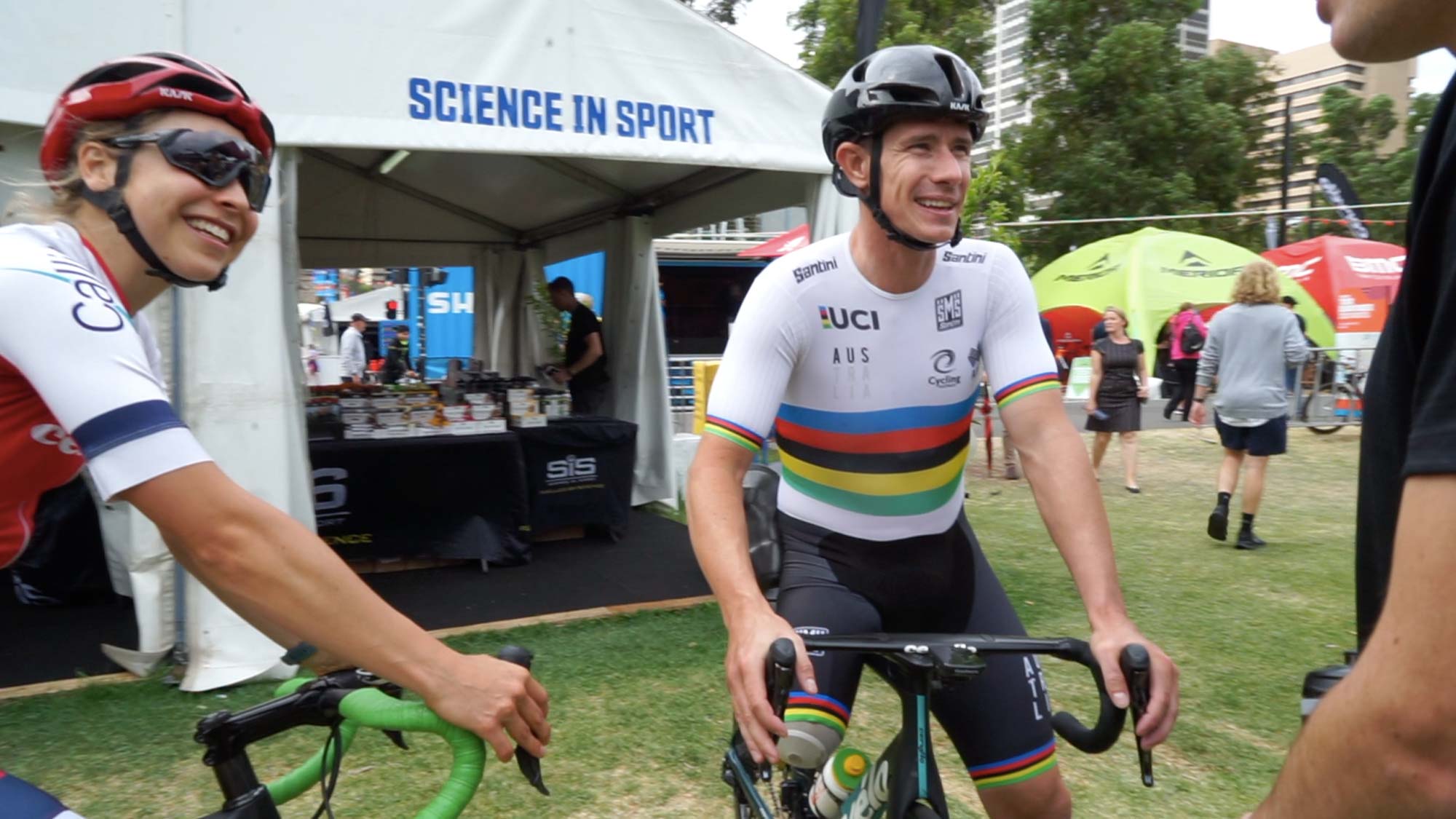 Darren Hicks – @Hicksy37 on Instagram – is on his way to Canada. He has become a cyclist, a champion of the world, and he has the kind of attitude that can inspire people who have suffered a setback.

By chance he has realised that the bike is good for many things: winning races, but also therapy, providing physical benefits and mental stimulation… and a sense of satisfaction.

I hope you enjoy our quick interview and will join me in following his exploits in Canada and beyond in the coming weeks and months.