This is a bike that demands attention. It has a titanium frame and drop handlebars, but that’s about where the similarities with traditional road bikes ends. The Curve GMX+ was on display at Oma Fiets, and it begged to be ridden (and filmed)… so we did just that.

‘Oma Fiets’ translates to ‘Grandma Bike’. The Dutch name of a shop in the Sydney suburb of Alexandria would suggest that this LBS caters for the casual side of the cycling market, the commuting crowd perhaps. You know, the traditional single-speed step-thru frame that can be seen everywhere in Holland? Well, yes… you can find those bikes in this cool, converted warehouse space on Mitchell Road opposite the new Woolworths. But there’s a lot more on offer too.

Want to explore your cycling options? Pay a visit to Oma Fiets. There are some genuine treats to be seen.

If you want someone else to do the homework for you and find a unique bike, then drop in and say hello. You may find that you stay a while.

It’s my ‘local’, just around the corner from the RIDE Media office. I wandered in to poke around while my burger was cooking at the takeaway next door. That’s when I saw it: the GMX+ by Curve, and suddenly all that was planned for the afternoon became a second-thought. 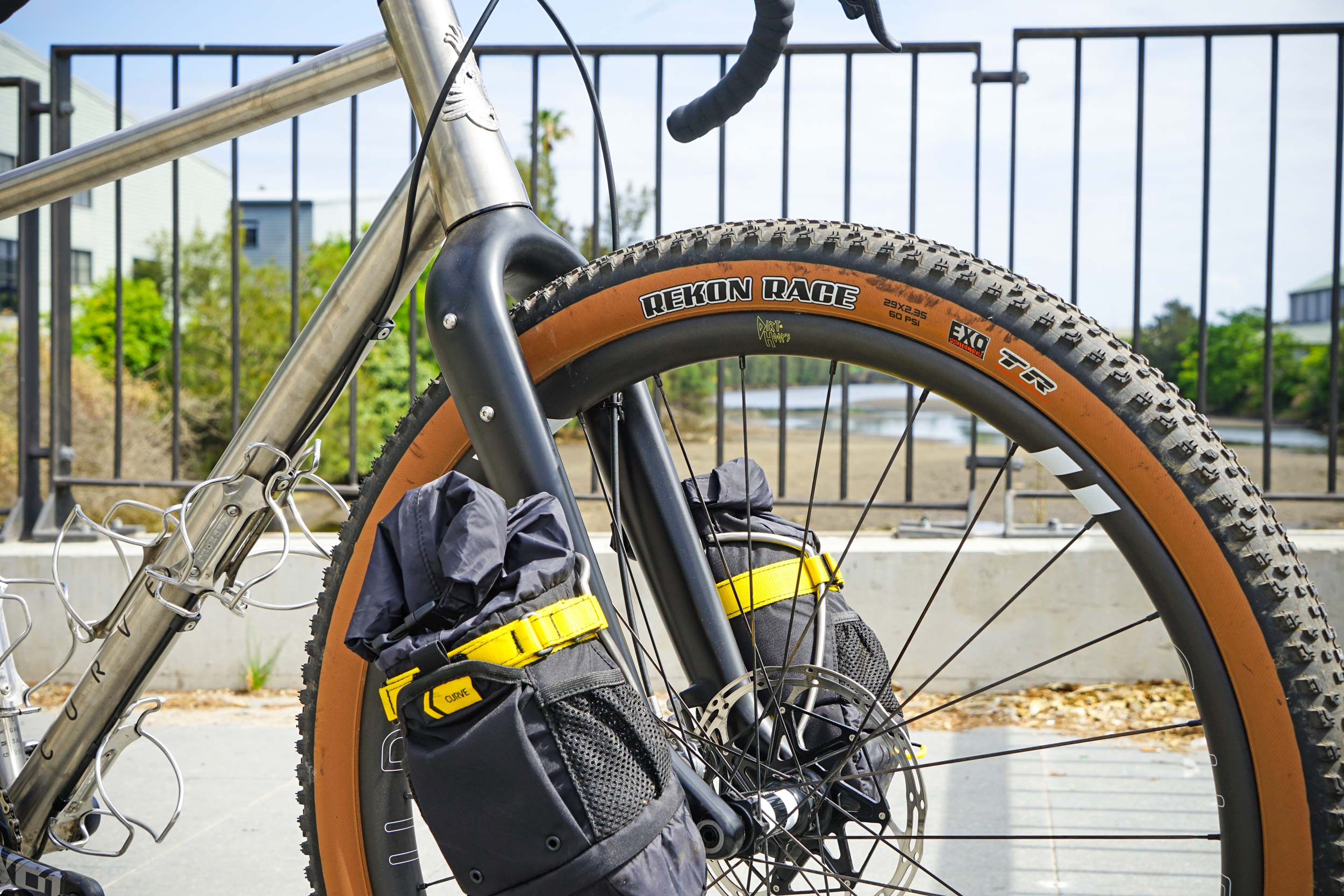 On display at Oma Fiets – a bike shop in Alexandria, NSW – the Curve GMX+ can carry plenty of luggage and transport you into a new world of cycling opportunities. (Photos: Rob Arnold)

With a titanium frame, a collection of Arundel bidon cages, an enormous carbon-fibre fork, and wider drop handlebars than I’ve ever seen in a life of cycling, it called out – in a loud voice – ‘LOOK AT ME!’

Wireless shifting, a 1X SRAM Red/Eagle combo, large Maxxis Rekon Race tyres, disc brakes, DT hubs and fat Curve-branded rims… it’s all there, in one surprisingly light package. Even when it was loaded up as you see it in these pictures – bags and all – it tips the scales at a little over 10kg.

I forget the exact figure on the scales, but I can now say that it rides like a very light bike. And it sings along on all kinds of surfaces. I know this, because it not only begs to be looked at, it compels you to ride it. 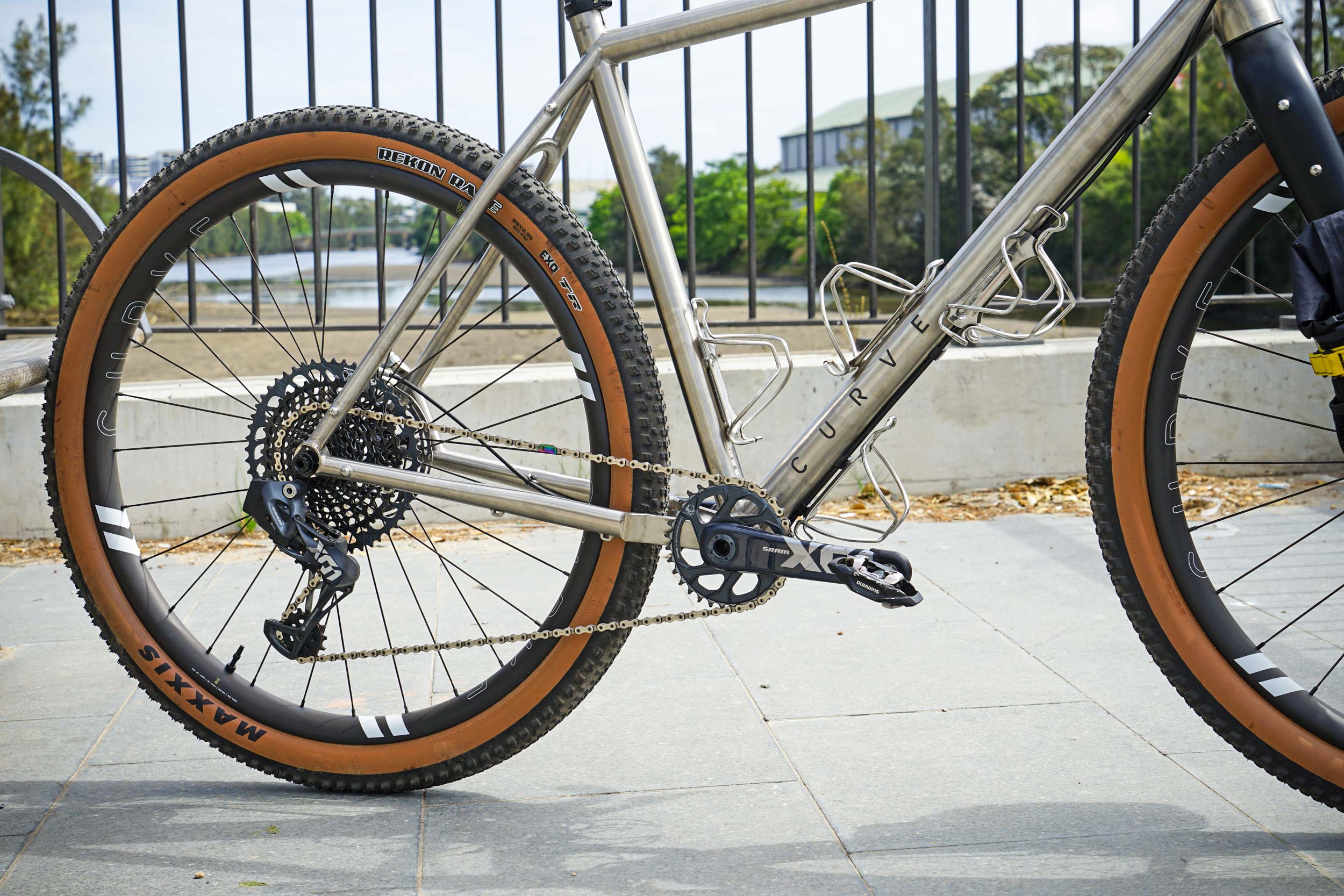 Shifting duties are managed by a mix of SRAM Red and Eagle components… all electronic and wireless, of course.

While ogling the CMX+ on the stand I asked Oma Fiets’ Oliver Cashman a little about the bike. “Cool, huh?” Yep.

The conversation went on for another 30 seconds or so but there was minimal sales pitch. “It’s a Curve. We sell a few. It certainly gets some attention.” And then he said the magic words: “Want to have a go?”

“I’ll be right back,” I replied. “Just going to grab my camera and cancel my other plans. See you soon.”

An hour after my casual visit on a random Wednesday, greasy lunch in my belly, I was back at the shop with my MTB, a camera and a sense of adventure. 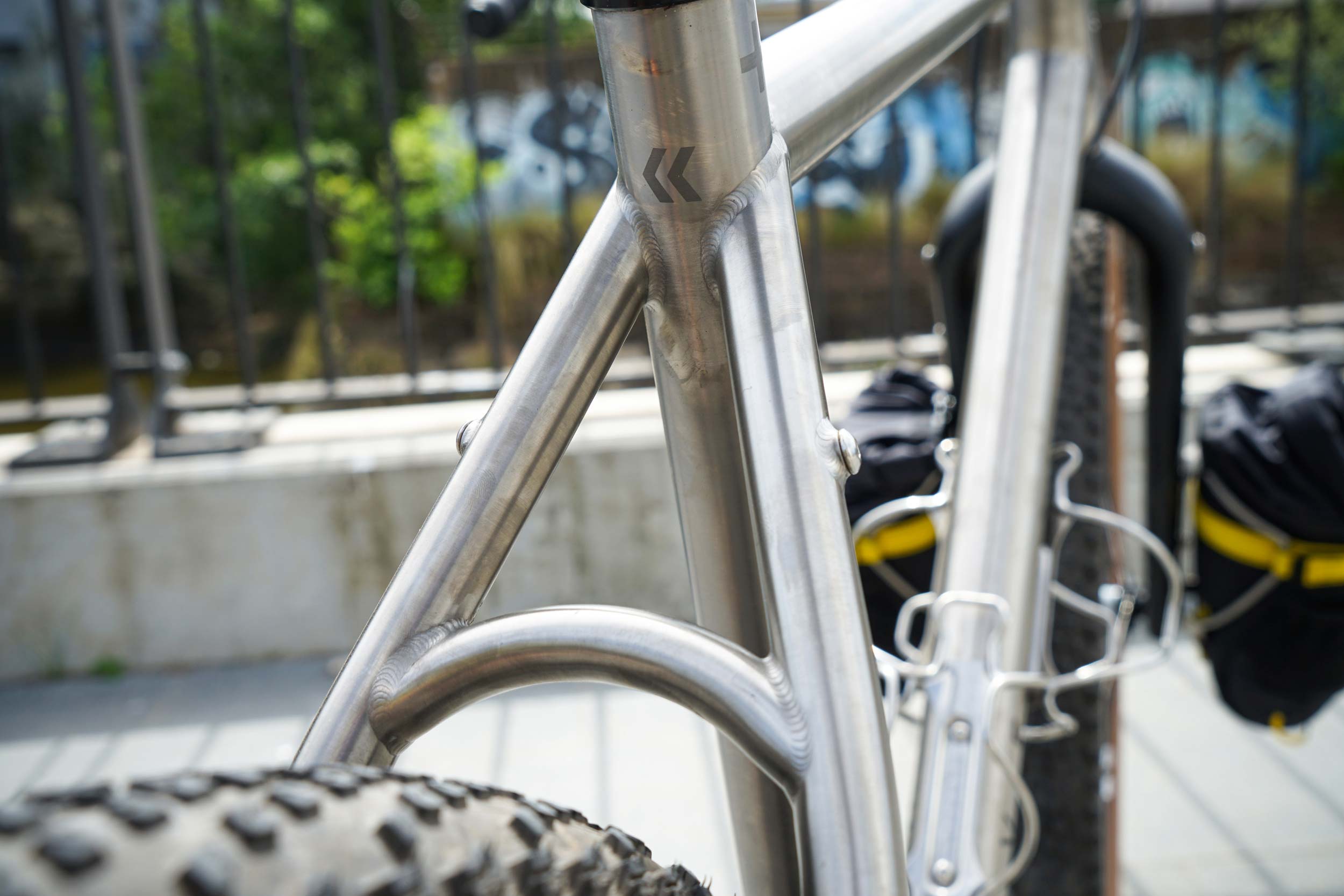 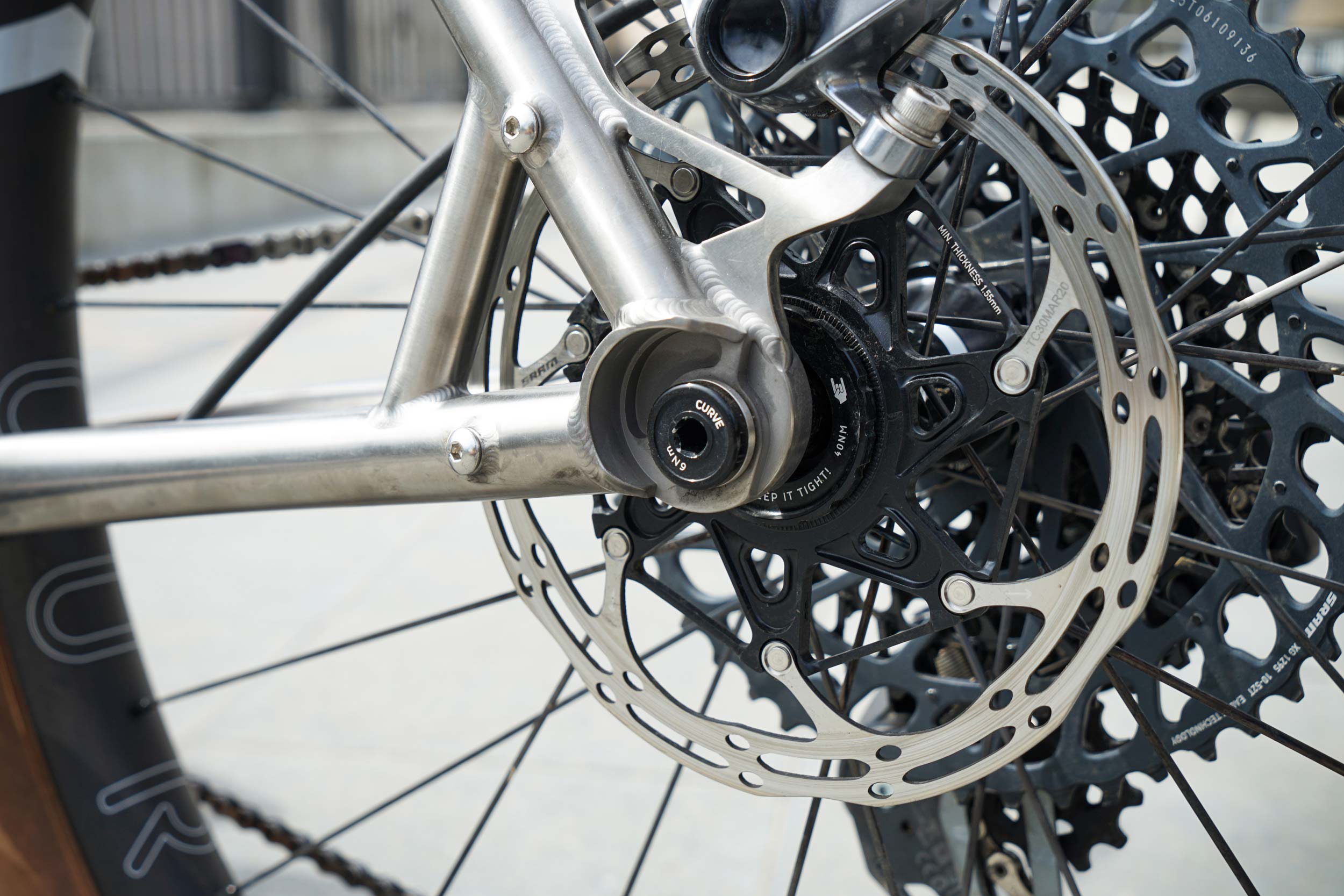 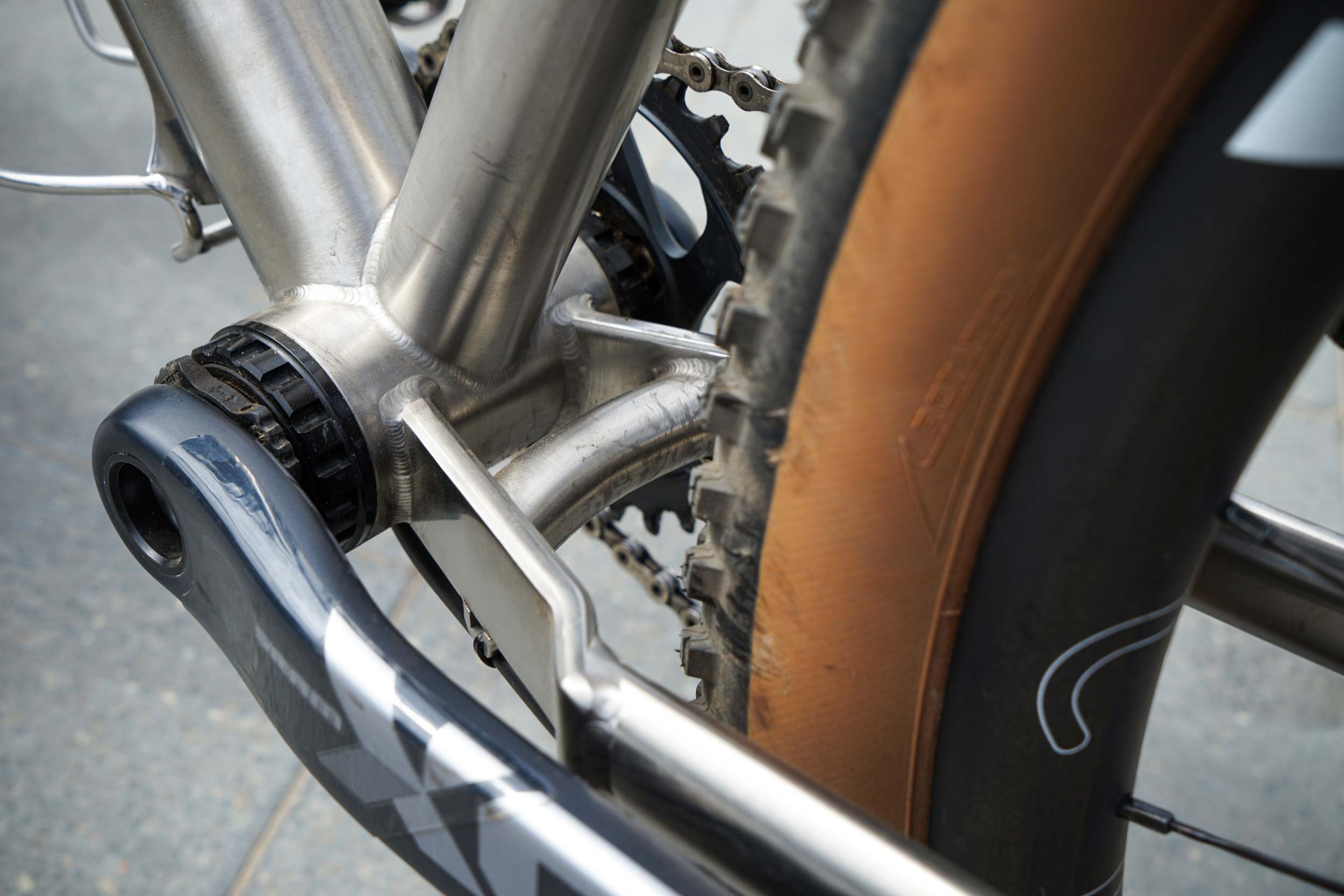 It had been a pretty average start to the day. I was looking for a distraction, and – thankfully – I duly got one in the form of this adventure bike that I knew nothing about.

“I’m doing this thing on YouTube and on my site,” I explained to Oli. “I’m calling it #StoryOfMyBike…” Etc.

He nodded. He understood. “Like, ‘story of my life’, but with a cycling bent?” 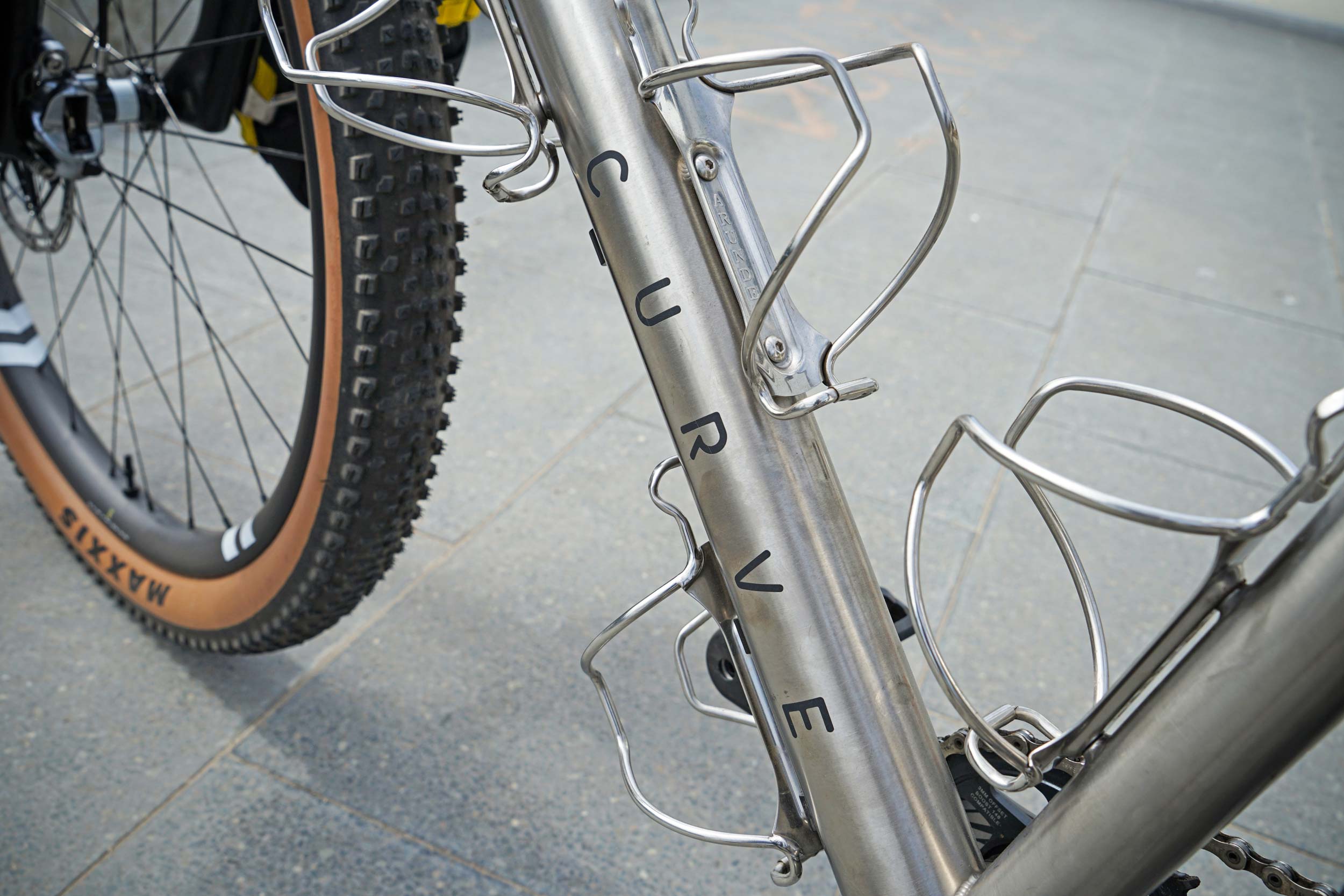 This GMX+ (and other bikes in the growing collection of stories) isn’t “my bike”, not yet. But it may be one day.

The blurb on Curve’s site tells you some of the detail in a one-paragraph overview…:

“The GMX+ is the ultimate titanium bikepacking bike. Whether it’s an overnight gravel grind, ultra-endurance racing like the Tour Divide, or off-road touring through the desert, the GMX+ can fit 3.0″ tyres, carry loads of water and ready for adventure.”

Oma Fiets have it on display. And the build is evidence of the kind of mongrel that cycling enthusiasts can build in 2020 to create a fantastic bike, something that can carry you across the country for an epic months-on-end adventure. It can, I now also know, also provide a rider with a 15-minute escape from the ordinary at the local park. 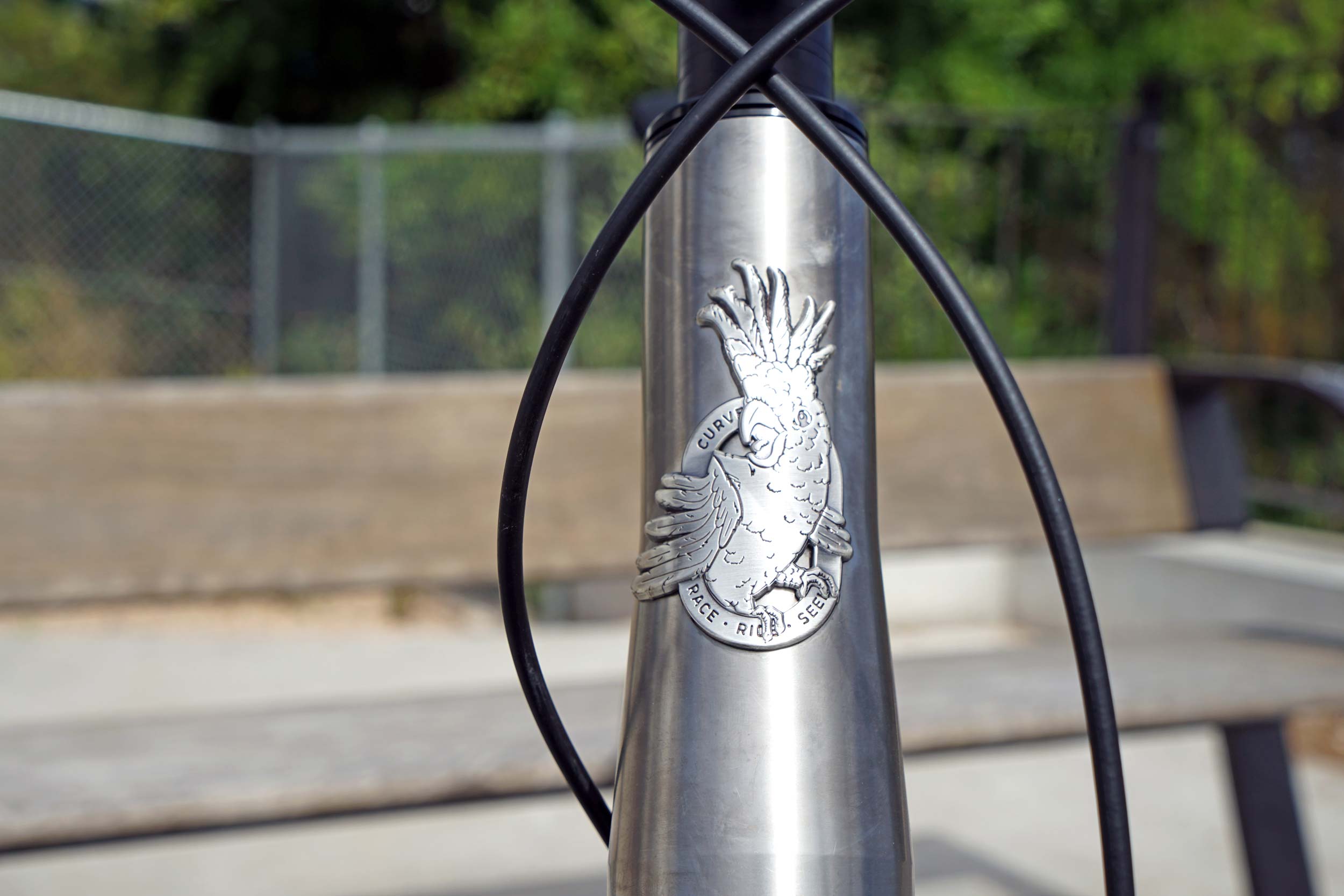 Upon my return to the shop, camera in hand and open mind whirring with thought, Oli asked: “What’s your plan?”

“Going to film it. Do an edit. Add it to the #StoryOfMyBike series,” I told him. It was a vague plan, but I was confident the story would write itself. This isn’t a cookie-cutter bike. It’s interesting. It’s unusual. It just looks like fun. And whatever happened next, I thought, ought to tell a story. Picture. Thousand words… etc. Right?

“Would you like someone to ride it while you film?”

“That’d be great. Got someone in mind?”

And with that, our soon-to-be bike model appeared from behind the work-stand. He was ready to ride. Tom always seems ready to ride. He’s been doing it for ages. And he knows how to have fun.

Let me know what you think.