When Jack Bobridge attempted to restart his pro cycling career with the Trek Factory Racing team in 2016, he won the nationals, got a custom-coloured bike… and won another Olympic silver medal. It was his last full race season. Here is a gallery of his team-issue Madone. 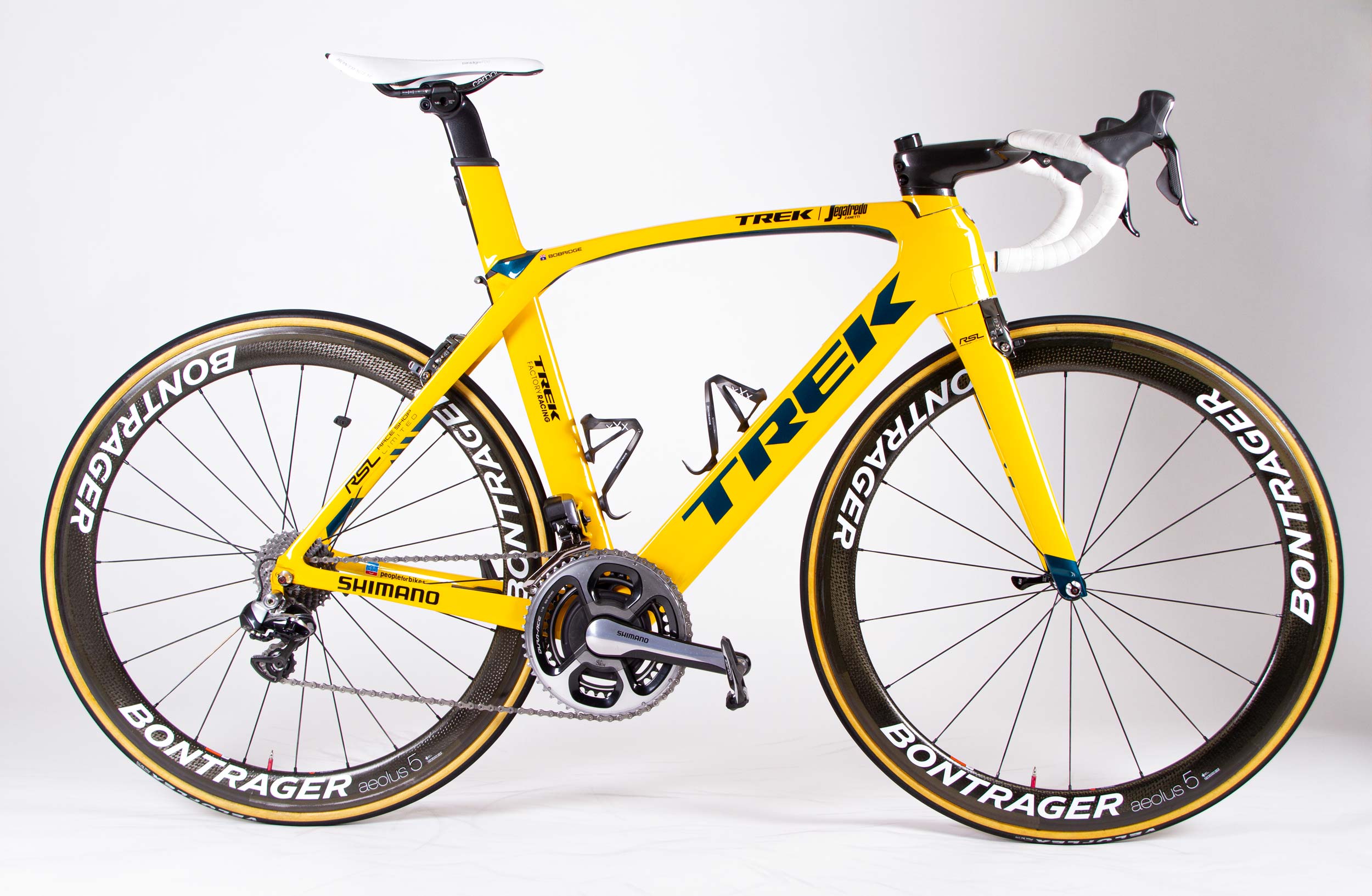 The revised design of the Trek Madone was launched with much fanfare in June 2015. It is a complete rethink of what bike design can be and includes customised centre-pull brake calipers, specific to the frame, as well as integration such as clips for (Bontrager) lighting systems on the seat tube.

The IsoSpeed decoupler is one of Trek’s major innovations and it has been incorporated onto a bike that appears built purely for stiffness… but there is an element of comfort that is surprising.

Jack Bobridge held on to his yellow bike for one more race — the Jayco Herald Sun Tour and then took delivery of a red-framed Madone for the rest of the 2016 season; the yellow bike is now on display in Trek Australia’s HQ in Canberra. 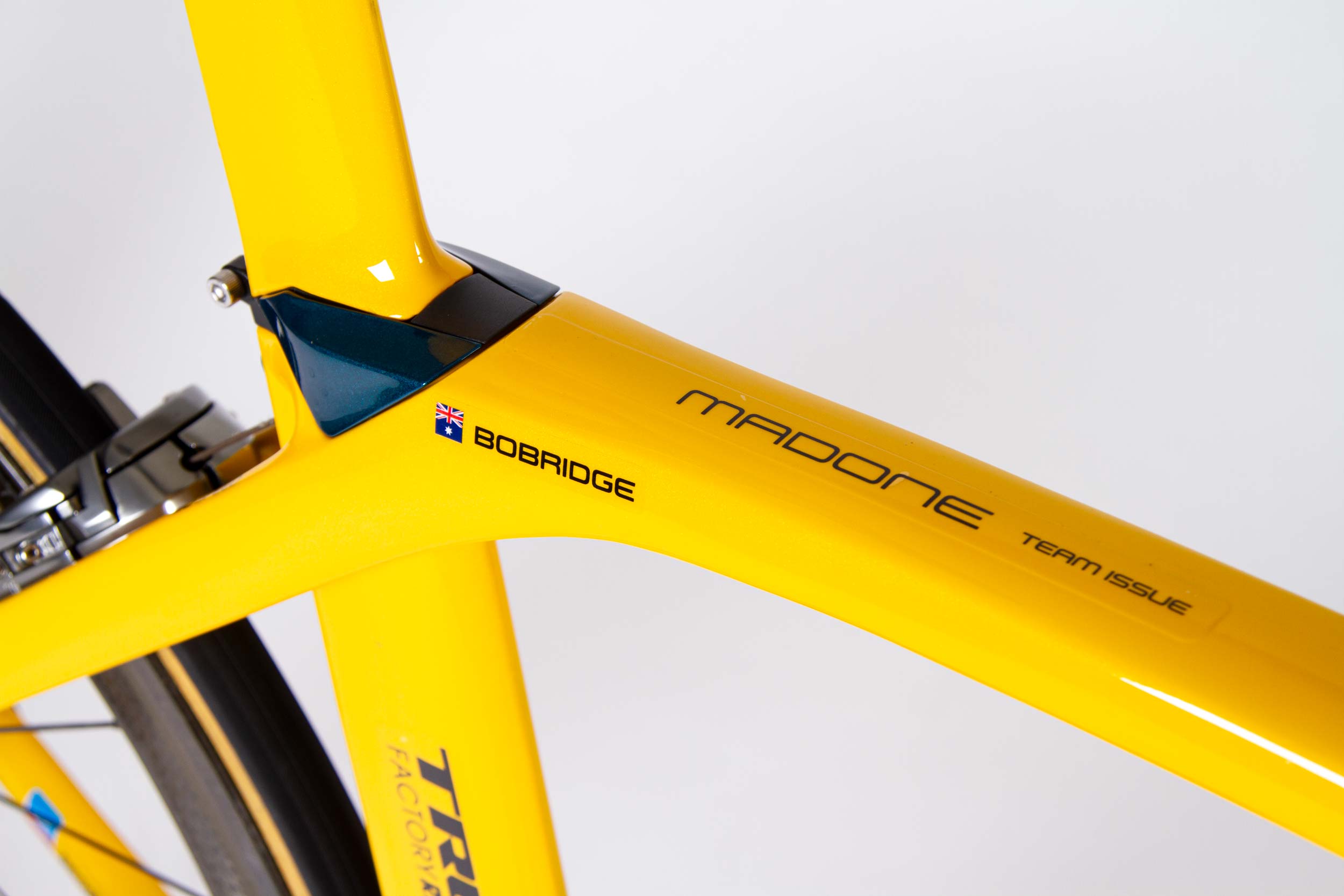 Trek-Segafredo’s thick tube red and white Madone frames were the boldest in the WorldTour when they made their racing debut in 2015.

The next January, for the first race of the 2016 WorldTour, each rider on the team was issued a custom coloured frame using Trek’s popular Project One palette.

The national jersey of other sports was used as inspiration for the Tour Down Under bikes, including ice hockey and various codes of football. 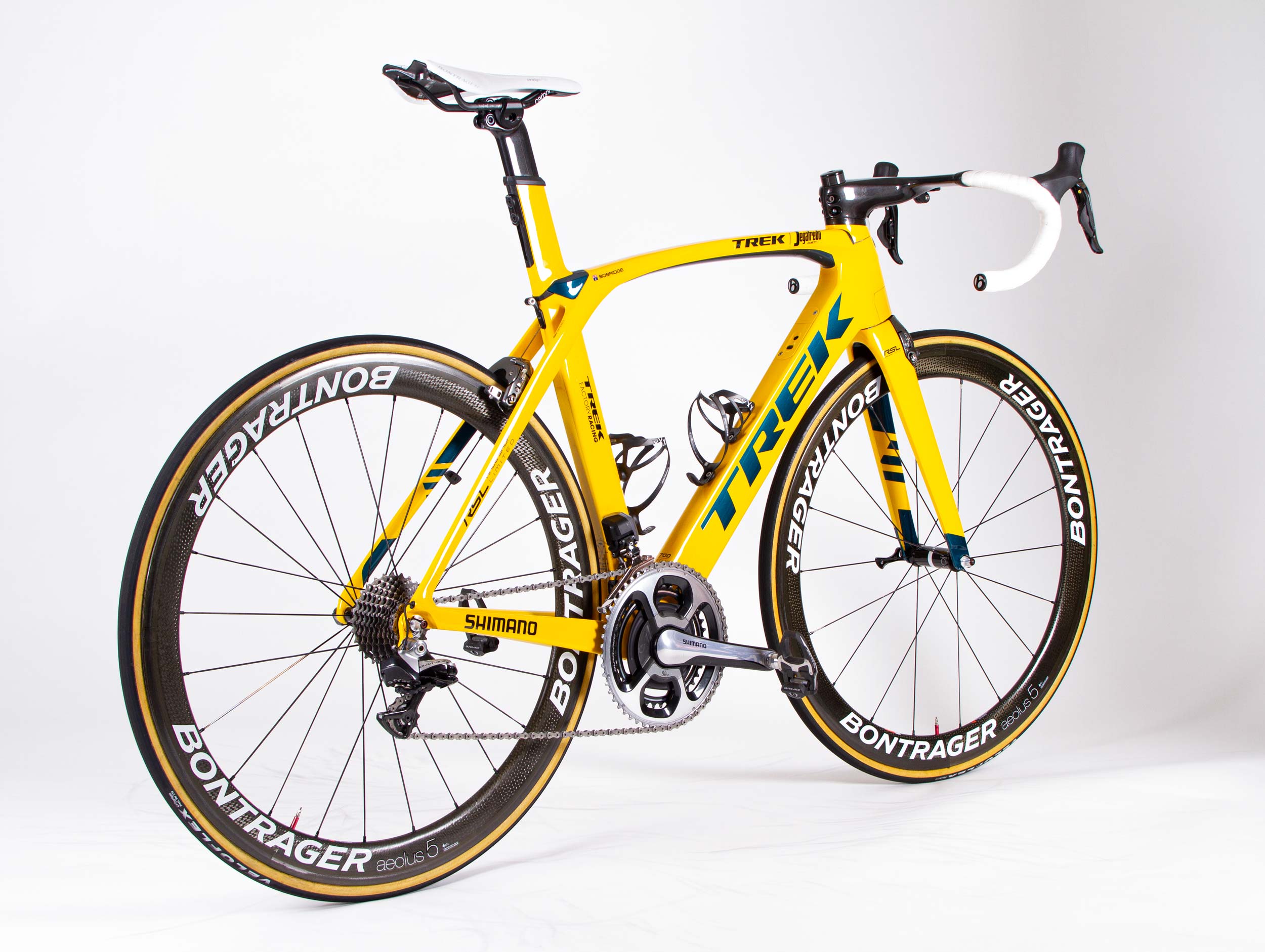 Jack Bobridge’s Australian Wallabies-inspired colours were widely regarded as the best looking in the race so it is worth taking a closer look at the Trek debutante’s machine. It just so happened to arrive right on cue: his first race in the national champion’s jersey was on a bright yellow bike.

It may interrupt what is a very clean aesthetic for a team that has been able to conjure a classic image with its black, white and red scheme but it certainly makes a statement! 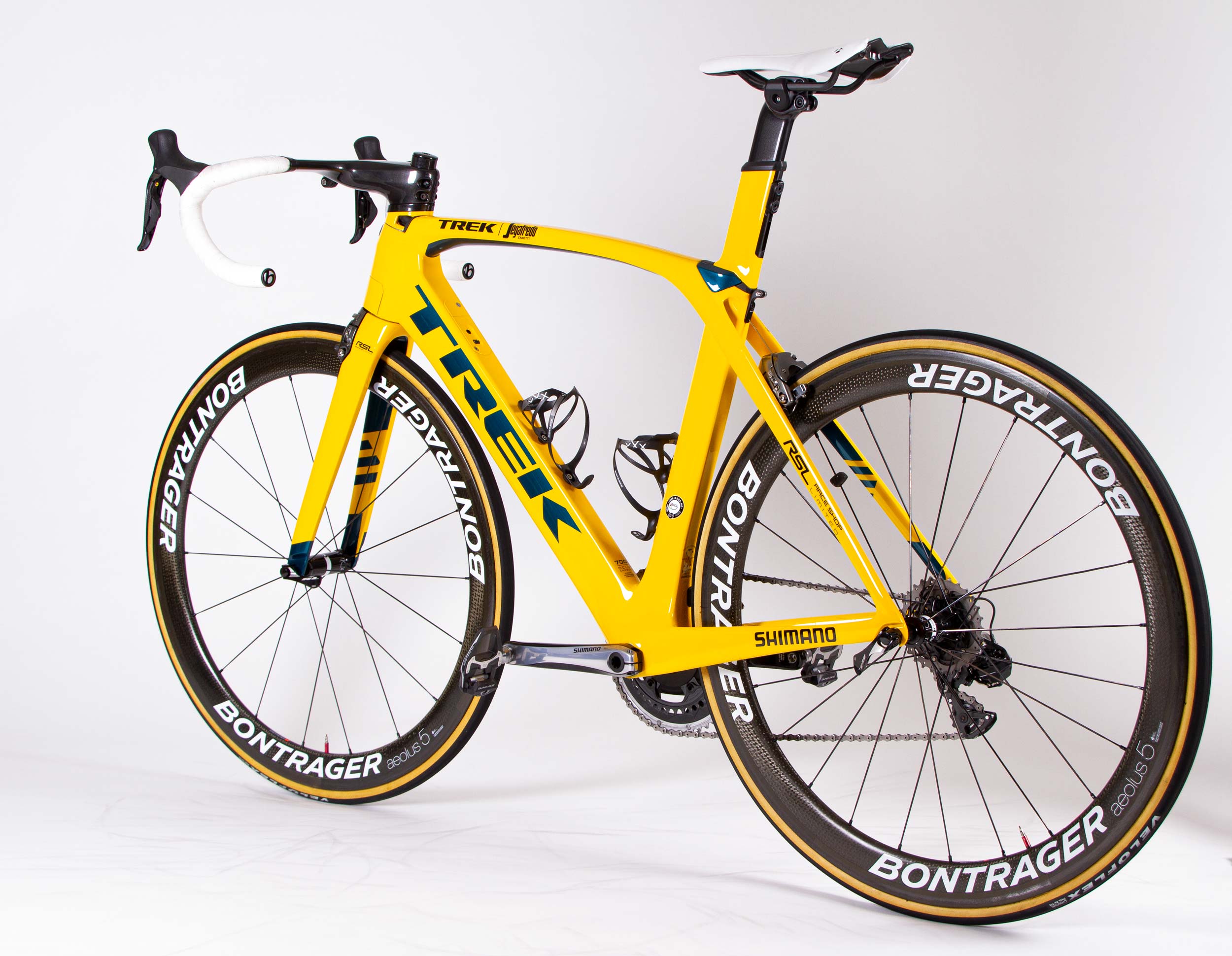 This was to showcase the bikes and the fact that they can be customised, so the exercise was worthwhile.

Everything on the bike that could be from Bontrager was, including the speed/cadence sensor Duo-Trap, rear number mount, SRM mount, bidon cages, wheels, bar tape and saddle.

The only non-Bontrager add-ons are the tyres from Veloflex and the SRM PC8 computer. 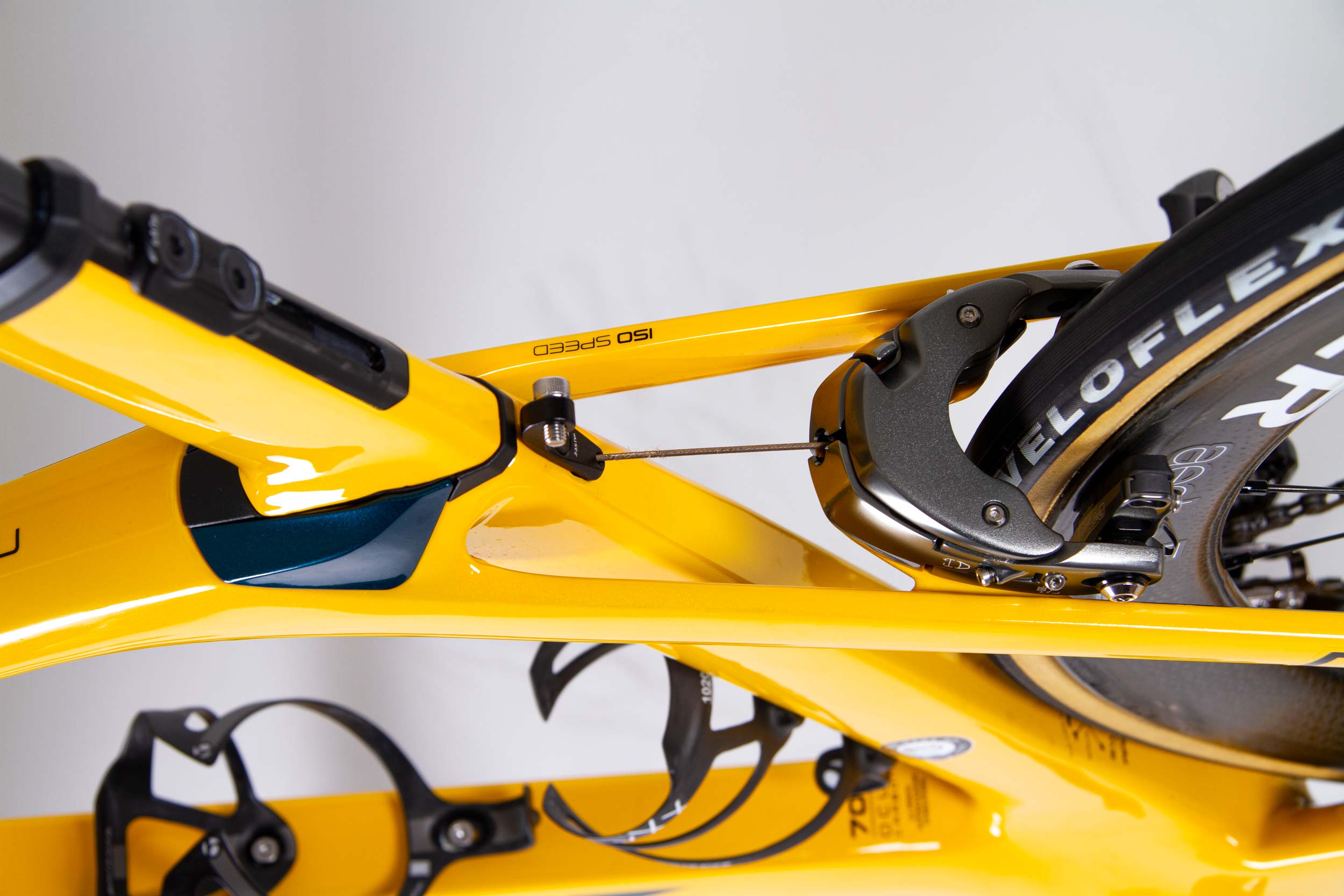 Bontrager’s first direct mount brakes for the Speed Concept TT bike work fine but could be frustrating to tune. The second attempt was for the most recent Madone. They were easy to adjust but felt terrible in use and the light alloy body never held its position. These brakes are easy to adjust (after reading the manual), they seem firm, and are incredibly snappy. There are four adjuster bolts – two on each side – which have a graphic depiction of their roles. The brakes are set up with a triangular wedge (similar to the Speed Concept) and then the pads are brought in and spring tension is adjusted with the screws.

A bike like the Trek Madone needs special consideration when building and Trek-Segefredo’s mechanic Glen Levin told RIDE that “the first Madone was complicated but now we are used to working on it so we’re faster to build it. We are used to it and know the tricks… the most difficult thing during the build is the handlebar.” 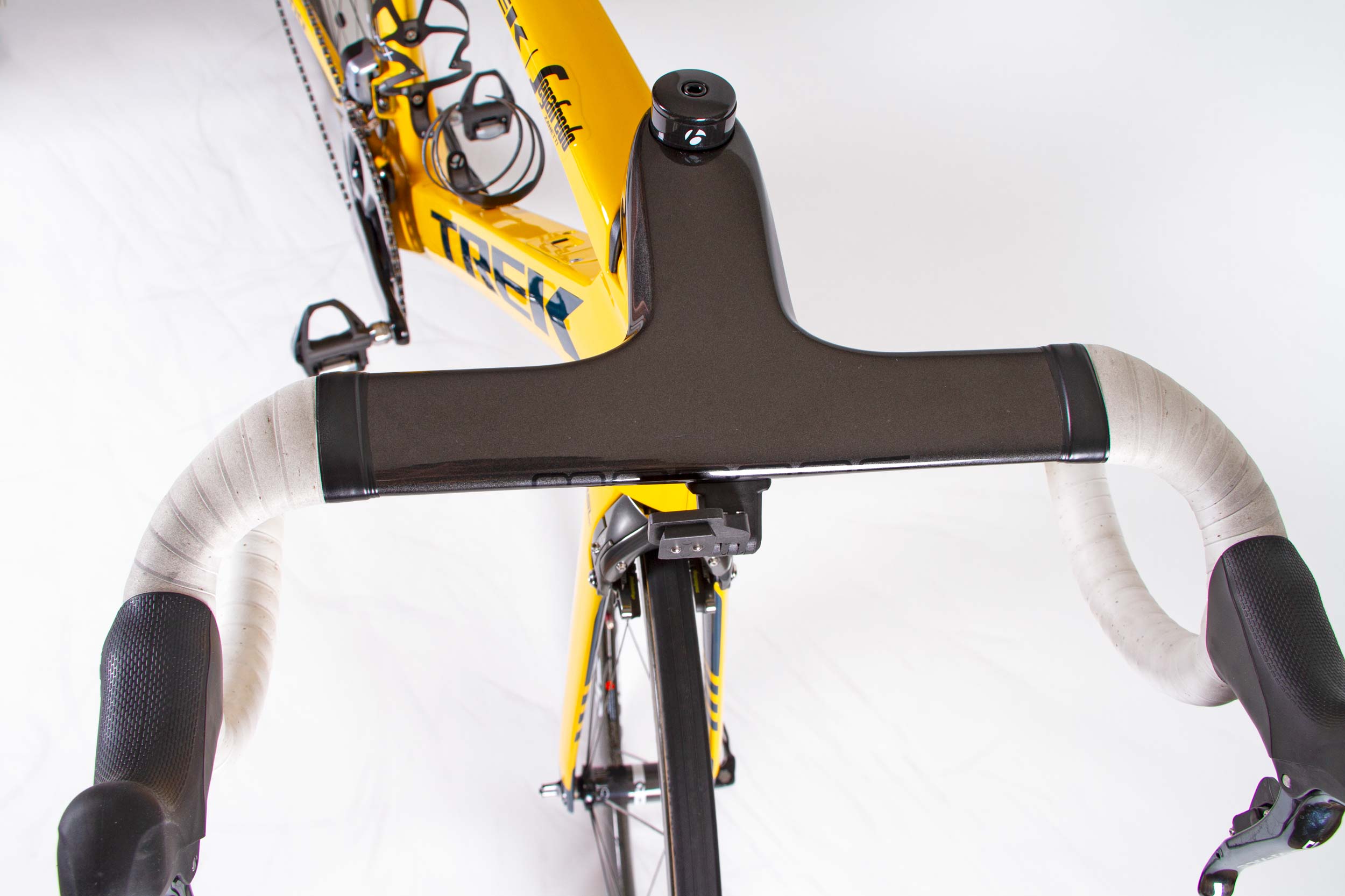 Routing the cables through the handlebars is surprisingly easy. The correct cable’s exit point is written on the stem so there can be no mistakes in placement. The rear brake has obviously been designed to US and European standards and I had some concerns that an extra kink required to achieve Australian standards (left hand for rear brake) might have reduced lever feel but it did not. This is largely due to an outer spanning the whole way through the top tube as well as snappy calipers. Trek supplies a rubber sleeve to wrap around the brake outer and reduce rattling – this is a terrific idea that has been employed by a few brands.

Despite it being difficult to build, Bobridge’s integrated handlebar and stem is one colossal unit. It’s 400mm wide and 140mm long (measured centre-to-centre) – this is quite a particular sizing option – and it’s a combination that’s not available for consumer purchase.

Another challenge when building the Madone is that the steerer tube needs to be cut absolutely perfectly or else there will be headset play or spacers will need to be fitted above the bars, ruining the aesthetic.

Levin explained that because Bobridge is a new rider to Trek, the team opted to leave some steerer tube in so the handlebar’s height can be adjusted more easily.

“Some riders will like to change positions, especially the new riders. With the new Madone, it’s not easy to get exactly the same measurements as it is on normal bikes so we leave some room in case they want to make quick adjustments.” 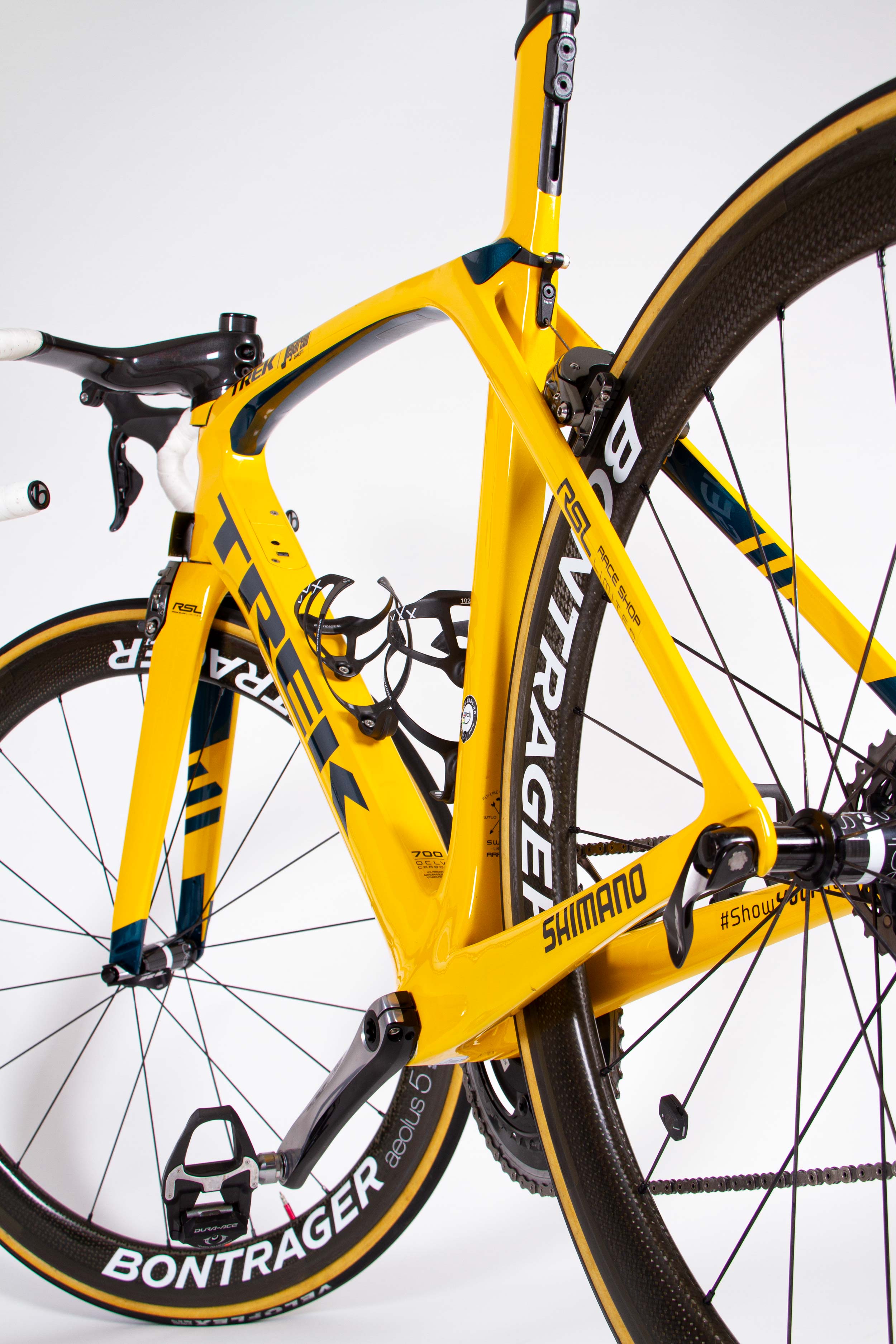 Trek’s BB90 bottom bracket has been refined with a better weather resistant cover sitting on the outside. A black plastic sleeve connects firmly into the bearing. It should increase bearing life and be a smoother system. Other than this, the BB90 was the same simple system with bearings getting pressed directly into the frame. There is a lifetime frame warranty attached to every Trek bike to counter arguments of longevity.

All Australian cycling fans will be keeping a watchful eye on Bobridge during his rebirth in the WorldTour but what does the team think of the precocious South Australian? “He’s a very easy rider for us mechanics. Until now, we like him,” Levin jokes as he prepares another eye-catching Madone. 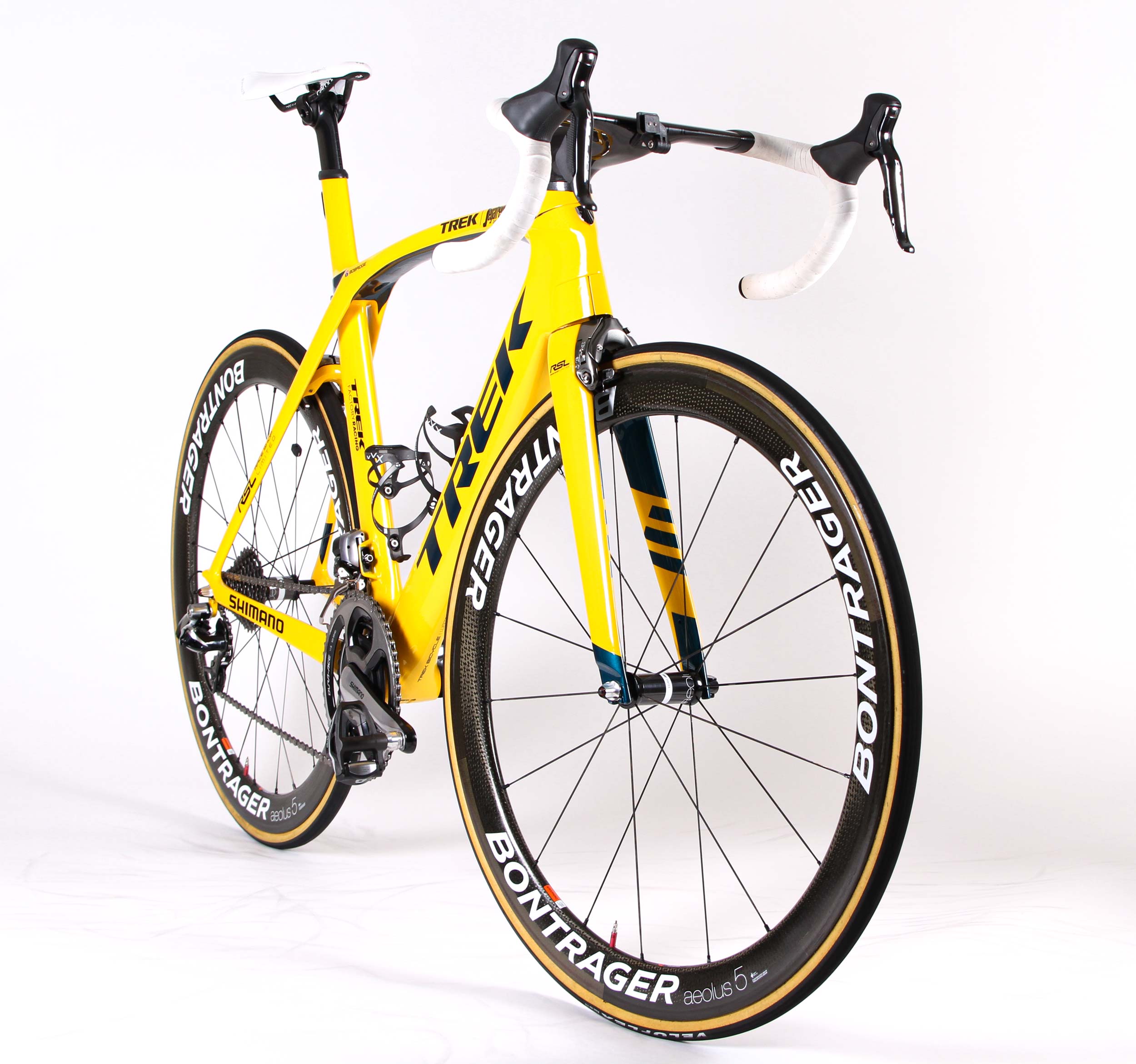 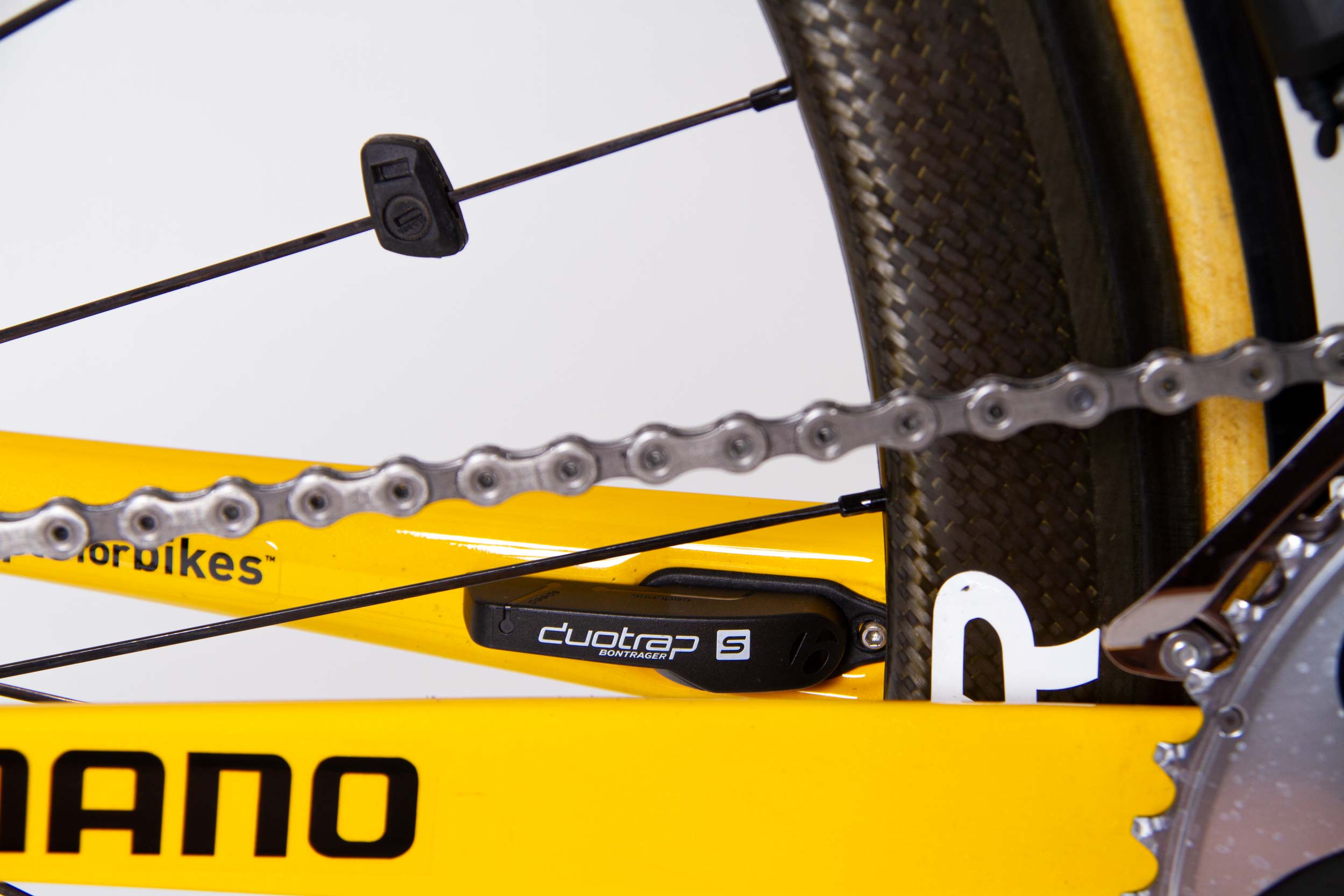 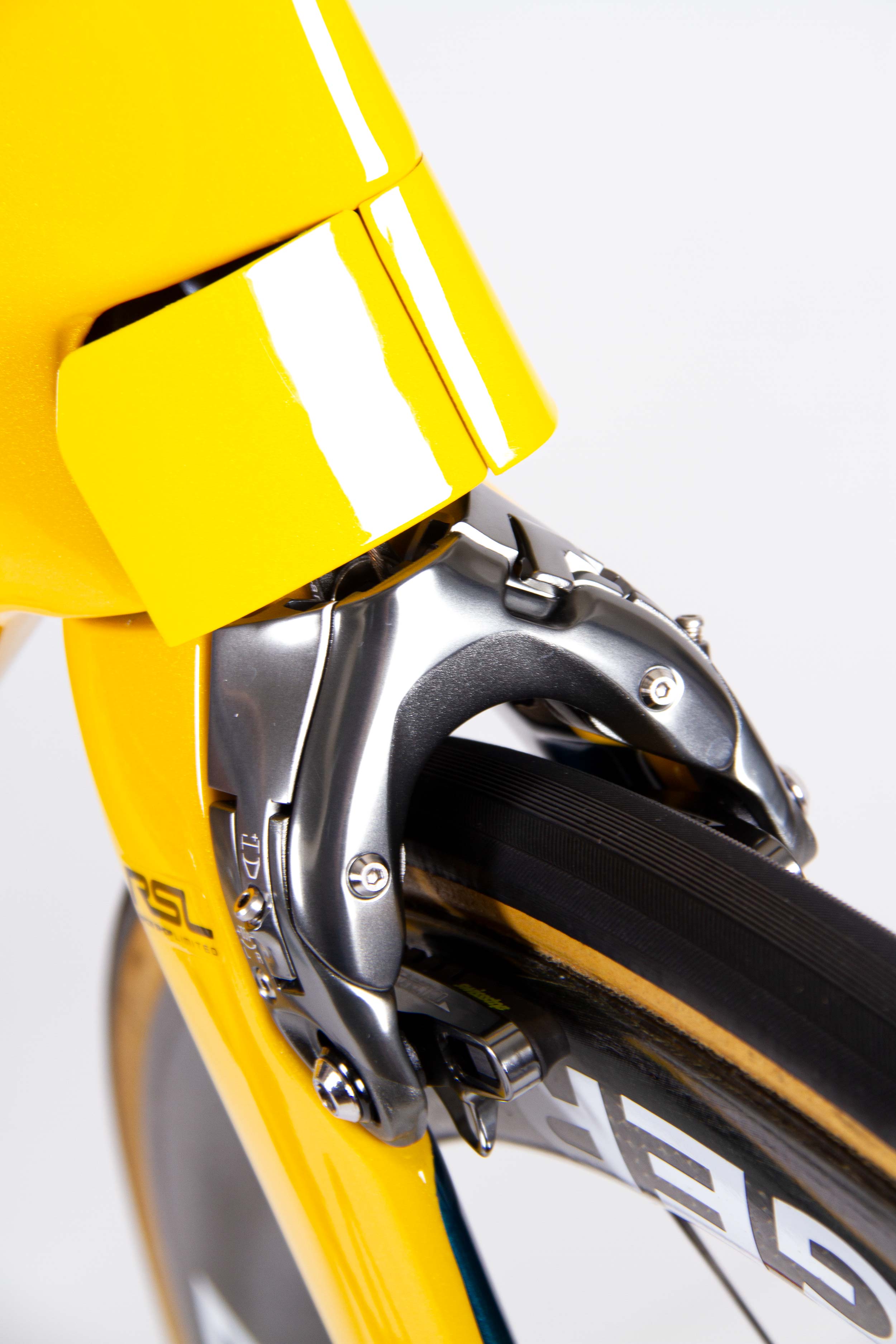 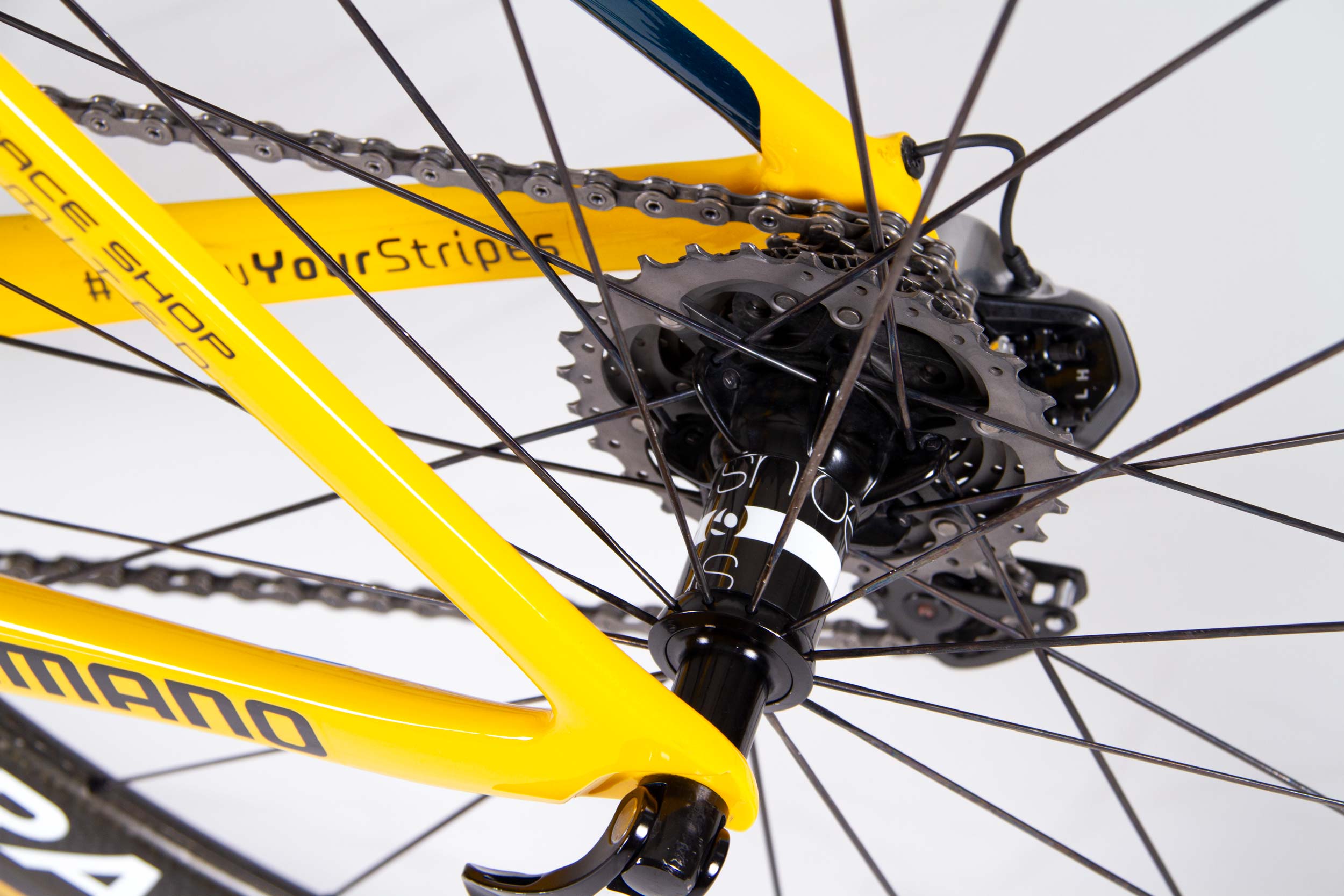 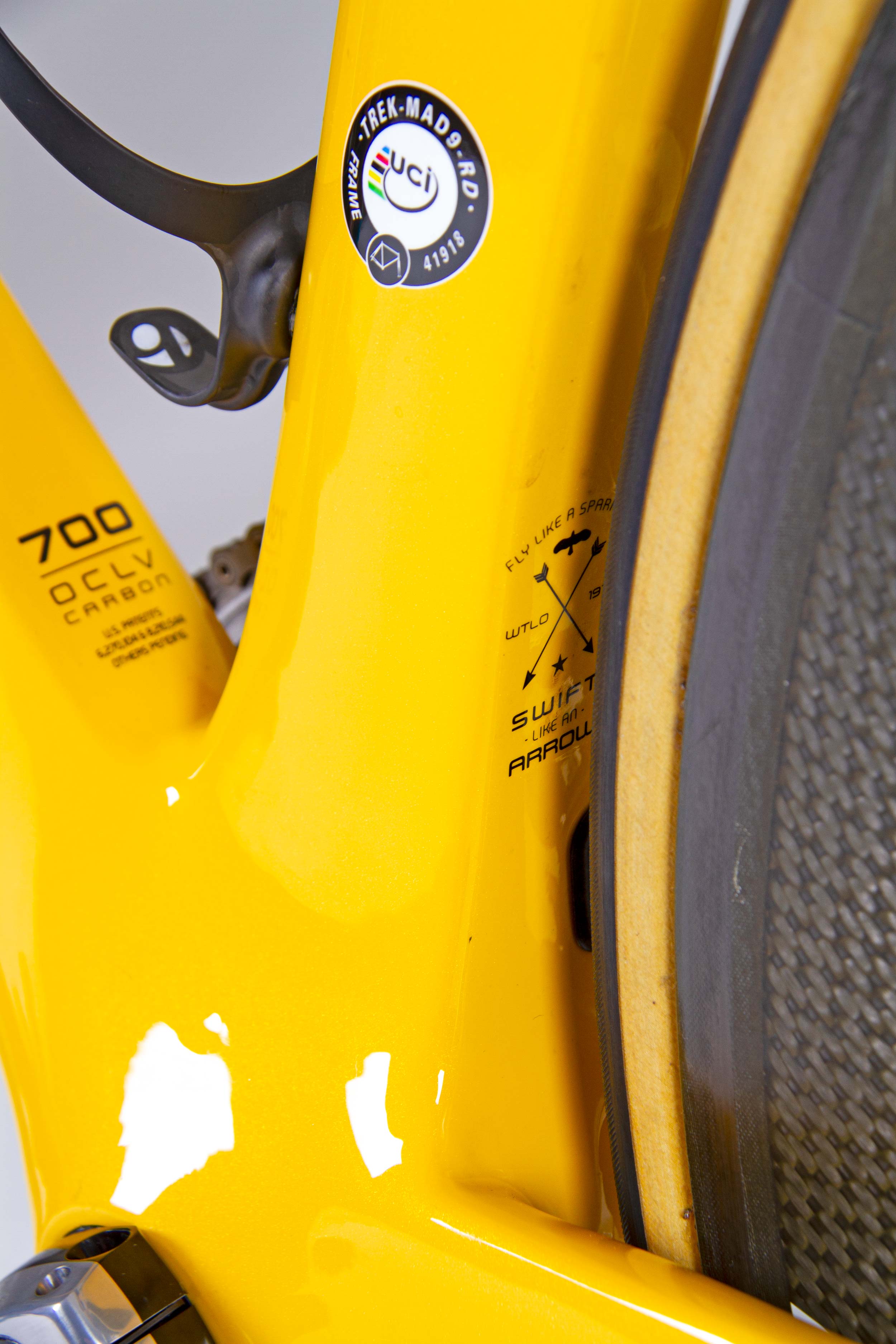 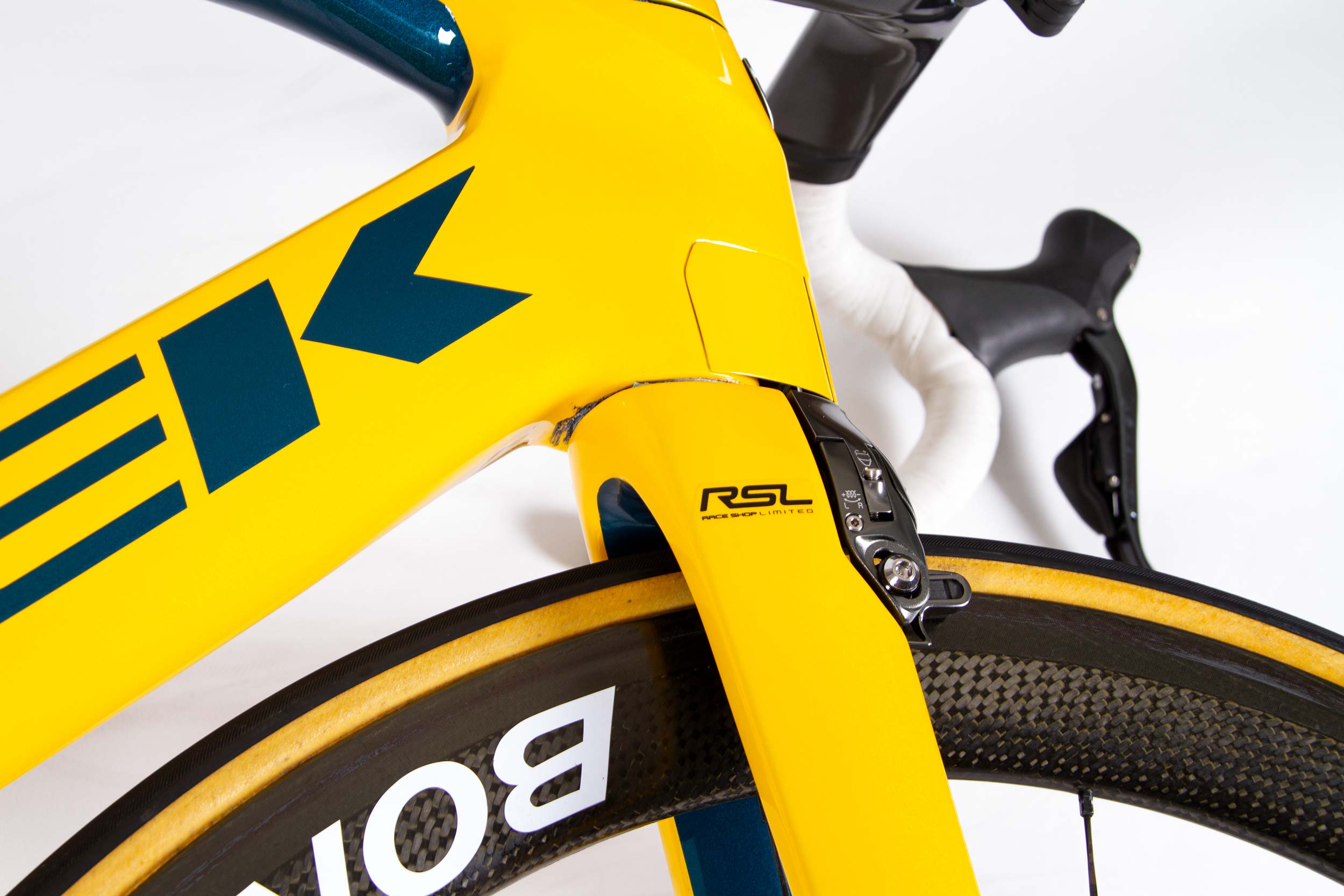