The Pinarello featured here is typical of pro bikes from the late-1980s: steel tubing, Campagnolo C Record groupset, chromed forks and rear triangle… and this one just happened to be raced by the winner of the Tour de France in 1988, Pedro Delgado. 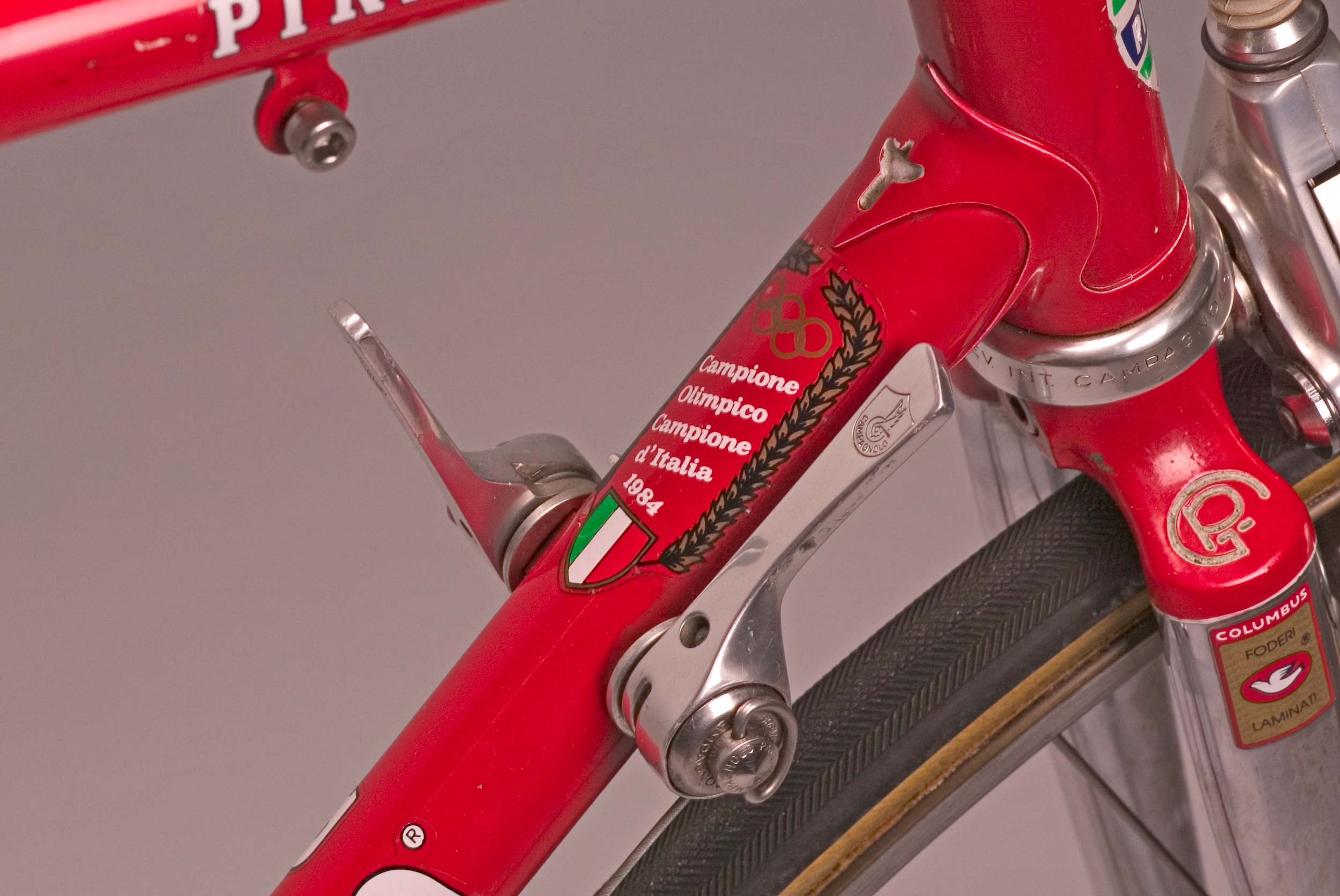 Pedro Delgado’s Pinarello from 1988 featured Campagnolo’s last incarnation of the friction gear change lever. The decal on the down tube refers to the fact that a Pinarello frame was ridden to victory in the 1984 Olympic road race by American Alexi Grewal.

One of several bikes Pedro Delgado used in 1988, this steel-framed Pinarello is a true classic. Equipped with Campagnolo’s C-Record, including the famous Delta brakes, it is a machine worth admiring even though some of the parts didn’t make it to the next season.

This Retro Review features a fine bicycle from the prestigious Pinarello stable. From small beginnings in 1952 in a single bike store in Treviso, Italy, Pinarello has grown to become one of the best known and highly respected brands in the world.

In 1988 it was still a small producer and not very well known to the emerging English speaking cycling world.

A victory by the unknown American amateur Alexi Grewal in the road race at the 1984 Los Angeles Olympics gave Pinarello a rush of post-race publicity. A full page magazine advertisement showed Grewal heading for victory with the name ‘Pinarello’ inexpertly imposed on his knicks in white lettering.

Pinarello’s sponsorship deal with the rider was done only after the race had been won. 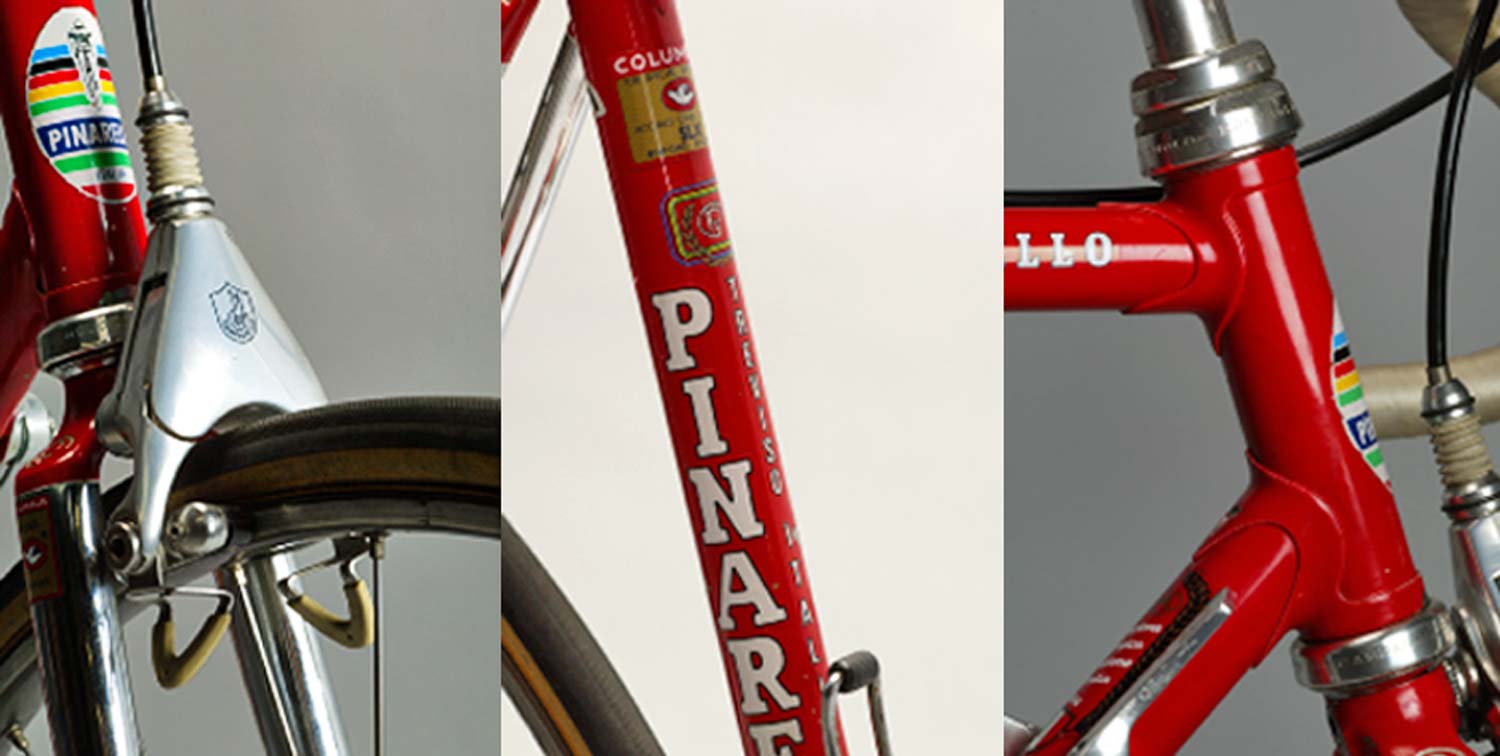 This feature bike is from 1988 and boasts the same red finish as Grewal’s steel frame. It was one of the machines used by Pedro Delgado, a rider with a growing résumé who claimed the biggest win of his 13-year pro career during the season that this bike was amongst his collection.

At the age of 28, Delgado won the Tour de France after several near misses.

He had won stages in the three previous years and started as a favourite in 1988.

He lived up to his reputation and became only the third Spaniard to win the French race. It was done in controversial circumstances after traces of probenicide were found during a doping control near the end of the competition. This product was banned at the time by the IOC but not cycling’s governing body and Delgado maintained his place in the peloton.

He claimed the final yellow jersey in Paris riding for a Spanish team sponsored by Reynolds on bikes supplied by Pinarello. 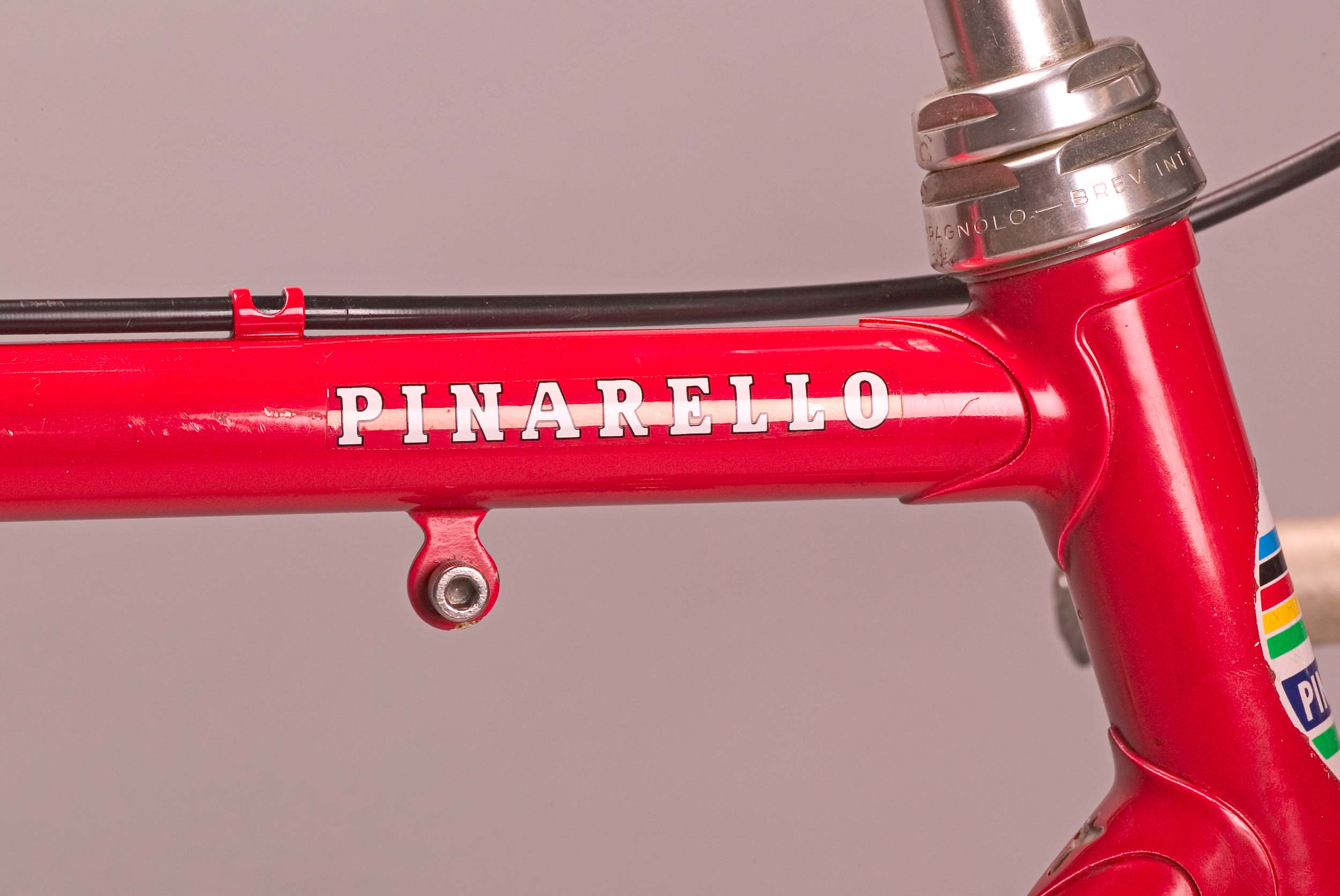 Indicating that this was a serious racing bike, the race number hanger was found on many European bikes. (There were also a few Australian machines that boasted this detail for years even though no such numbers were handed out at races.)

In Delgado’s squad during that 1988 campaign was a 24-year-old called Miguel Indurain. The rider from Villava would later go on to win five Tours – all of them on Pinarello bikes. His success helped the niche Italian manufacturer become a major force on the global market with its products desired by enthusiasts everywhere.

The Pinarello featured here is typical of the pro bikes from the era: steel tubing supplied by either Reynolds or Columbus, a magnificent Campagnolo C Record groupset, chromed forks and rear triangle, red paint, engraved and embossed with intricate details and white decals with the traditional black outline.

Close your eyes and visualise the same bike in your exotic brand of choice; De Rosa, Colnago, Masi, Tommasini all made bikes that were similar to this one.

From 20 paces, it was difficult to distinguish one brand from the other. The red and chrome look remains the combination most sought after by collectors of bikes from the 1970s and 1980s.

This bike has a noticeable lack of drilling and aftermarket lightening, instead Delgado relied on the Campagnolo designers and engineers to get the combination of weight, aesthetics and strength just right. 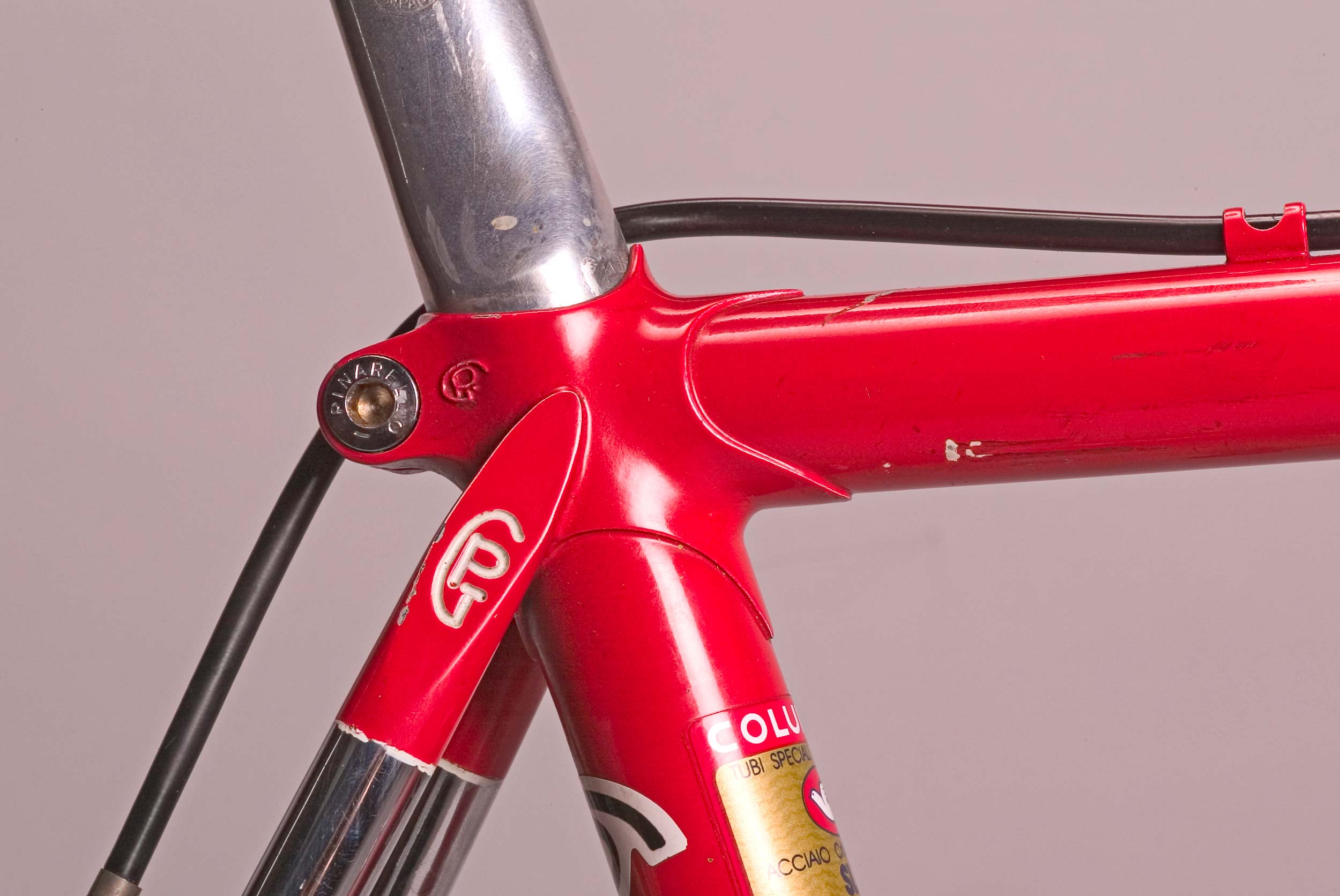 Perfect brazing is evident at the top of the seat tube. The intricate detail includes an etching of the ‘GP’ initials of the company’s founder Giovanni Pinarello. The frame is from an era when virtually every component was neatly branded Even the seat bolt boasts the word Pinarello stamped into it.

The C Record groupset, particularly the distinctive crankset and the Delta brakes would have put this bike at the top of the market in 1988.

I’ve always been told that you can’t buy speed but with this ensemble you could certainly buy beauty.

Campagnolo launched the Delta brakes in 1986 but distribution stopped shortly afterwards because a fault with the cable binder bolt led to dangerous failures. By 1988 the design flaw had been solved. The brakes became readily available but were frightfully expensive. 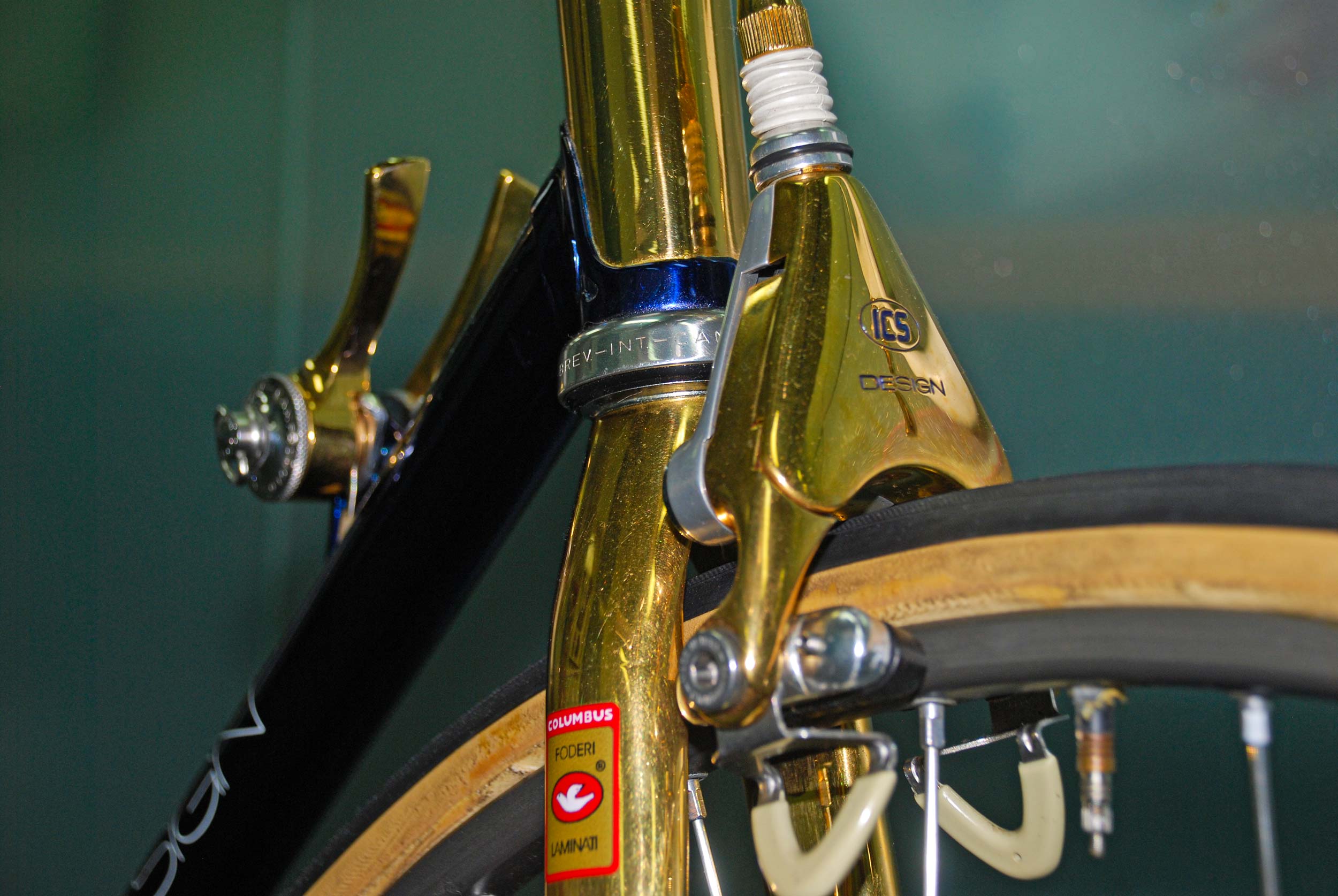 This collectible set of Campagnolo Delta brakes (above and below) boast a gold finish and they are even more exotic than what Delgado would have used in 1988… they are beautiful objects of desire, but be wary if you ever use them – they don’t have much stopping power. 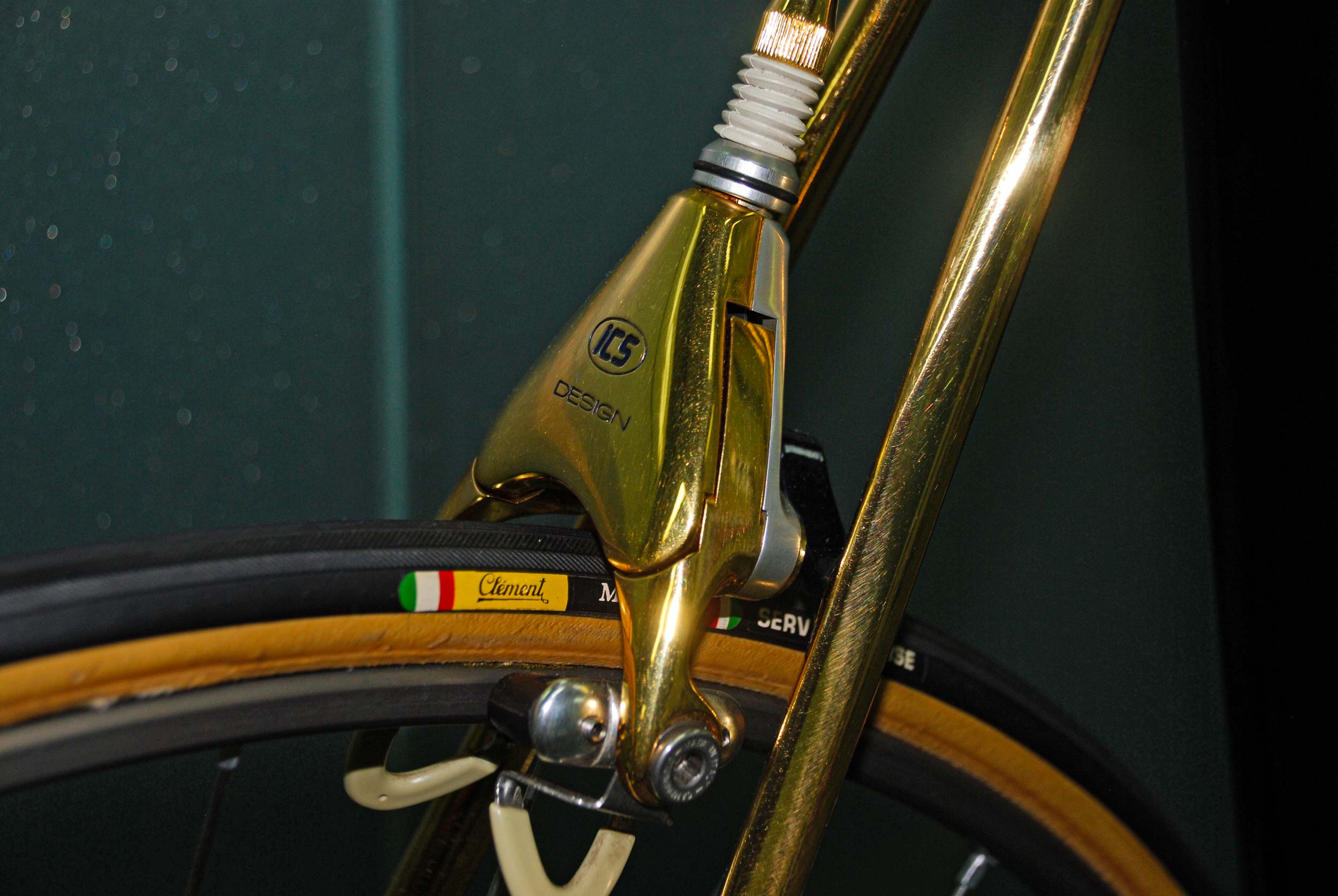 The callipers were an immediate conversation starter for anyone with a pair fitted to their machine.

They were fiddly and time consuming to adjust and required a 3.5mm allen key to clamp the cable. If you went to your local bike shop and asked for this tool 17 years ago it’s likely that you would have been met with blank looks. Fortunately a suitable device came with the brakes when you purchased them.

There were five variations of the Delta brakes, with enhancements released unannounced from time to time.

There was also a ‘Croce d’Aune’ version, part of a groupset one down the hierarchy from Record.

This ensemble wasn’t particularly popular, perhaps because no one could pronounce it properly. Knowledgeable collectors – in Australia at least – seldom mention it, for fear of hearing the laughter of their peers as they struggle with the words. It is usually mentioned in veiled terms along the lines of “that Campag stuff that no one can pronounce?”

It may transpire that this will become the most collectible item of all. 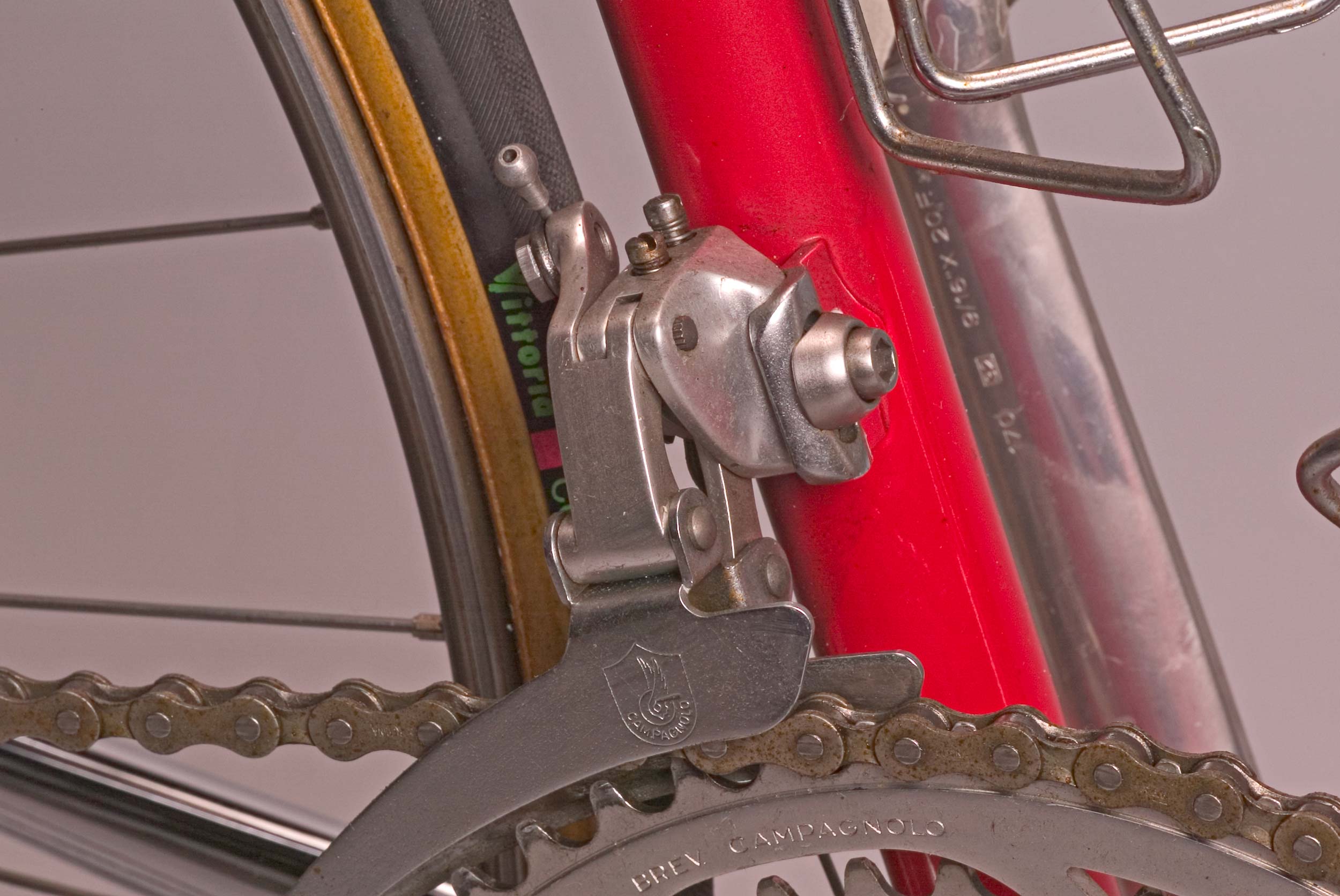 The simple and uncluttered lines of Campagnolo’s C Record front derailleur, with absence of the holes that were in the cage on the previous models. Note the unsophisticated construction of the chain. They didn’t look too special but these chains rarely broke, not even when installed by a home mechanic.

The C Record brake levers were interesting during this era. They were made so that the cable could be set up in either the traditional open way (out the top of the lever), or the new way (under the bar tape).

The Delta callipers had no facility for releasing to allow quick wheel removal, so the levers had an ingenious clip built into them that allowed the release to be executed very simply from just under the lever hood. This is still present on contemporary groupsets from the Italian component giant.

The groupset on Delgado’s bike represents a mix of technologies. It has a revolutionary aero brakeset, a smooth chainwheel spider, super slim aero seat post and brake cables that are hidden beneath the bar tape.

On the other hand, it retains the 60-year-old technology through the use of ‘friction’ gear levers, devoid of any type of indexing.

Many people lament the passing of friction shifting, with its infinitely variable adjustable mechanism.

The rear derailleur would always select the gear you wanted, even after a fall or the substitution of a foreign rear wheel.

The front derailleur fine-tuning function was far more effective than the modern ‘detentes’. Furthermore, the levers weighed practically nothing.

The aero seat post has become known as a dangerous item. As the years go by it’s a case of ‘when’ it will break rather than ‘if’. Be careful if you’re still using one of these exotic-looking posts and you have put on a few pounds since your racing days.

Delgado used Time pedals during the 1988 Tour, and recorded one of the earliest major victories with the clipless design. The C Record pedals on the featured bike were still in wide usage at the time, with many riders swapping over in the late-1980s.

The Pinarello-branded straps and Campag spring steel toeclips are another example of the attention to detail we came to expect on the top models. Campagnolo made an aluminium toe clip at this time but many riders reverted to the reliable steel clips.

An interesting footnote for Pinarello fans is that Cesare Pinarello, the brother of the company’s founder Giovanni, represented Italy at the Melbourne Olympics in 1956. Sharing the tandem with Guiseppe Ogna, he won the bronze medal in the now-defunct 2,000m tandem sprint. Australians Ian Browne and Tony Marchant won the gold. The frame from Cesare’s normal track bike was sold to a local bike shop proprietor before returning to Italy.