The catalyst for getting the Cervélo Caledonia frameset was to build a bike using SRAM’s Force AXS ‘Wide’ groupset, offering a large range of gearing options.

The intention was to build the Caledonia 5-series frame so that it turned into something of a gravel bike. The reality of what’s become of this bike, however, is significantly different.

Yes, the opening weeks of the ‘review’ period – of a bike I’ve ended up making my own – were spent riding largely off-road. For around a week, with a base at Woodford in the Blue Mountains, mornings were spent watching the sun come up while riding down the Oaks Trail to Glenbrook and back.

There were a few afternoon rides too, and sometimes I’d go down on the trail… and back via the highway. And this is what a bike like this is ideal for. Good for a bit of adventure, great for getting where you need to go… fast, smoothly, efficiently.

With 32mm tyres inflated with a low pressure (±55psi) the Caledonia as you see it here handles the rough stuff easily. Admittedly, it wasn’t too rough on the Oaks Trail… but it was sandy and rocky and, importantly, offered a taste of cycling without the bother of traffic.

This, to me, was part of the appeal of what #ProjectCaledonia was all about: finding new places to ride and being able to do so without some of the usual concerns that come with cycling. As much as I like riding with people, I also like a bit of solitude – and some distance from the angst of the city.

When you’re exploring on a bike, you want to ride the bike. Walking uphill and wheeling your bike while wearing road cycling shoes quickly eats away at enjoyment. This is where the ‘Wide’ groupset comes into play.

Small gears are nothing new. We’ve ridden ‘granny gears’ for years, but that’s largely been a MTB thing since back in the days of triple chainrings. Remember those? It seems like an eternity ago now, but so too do 26-inch wheels and a whole range of features that were once commonplace on trails around the world. 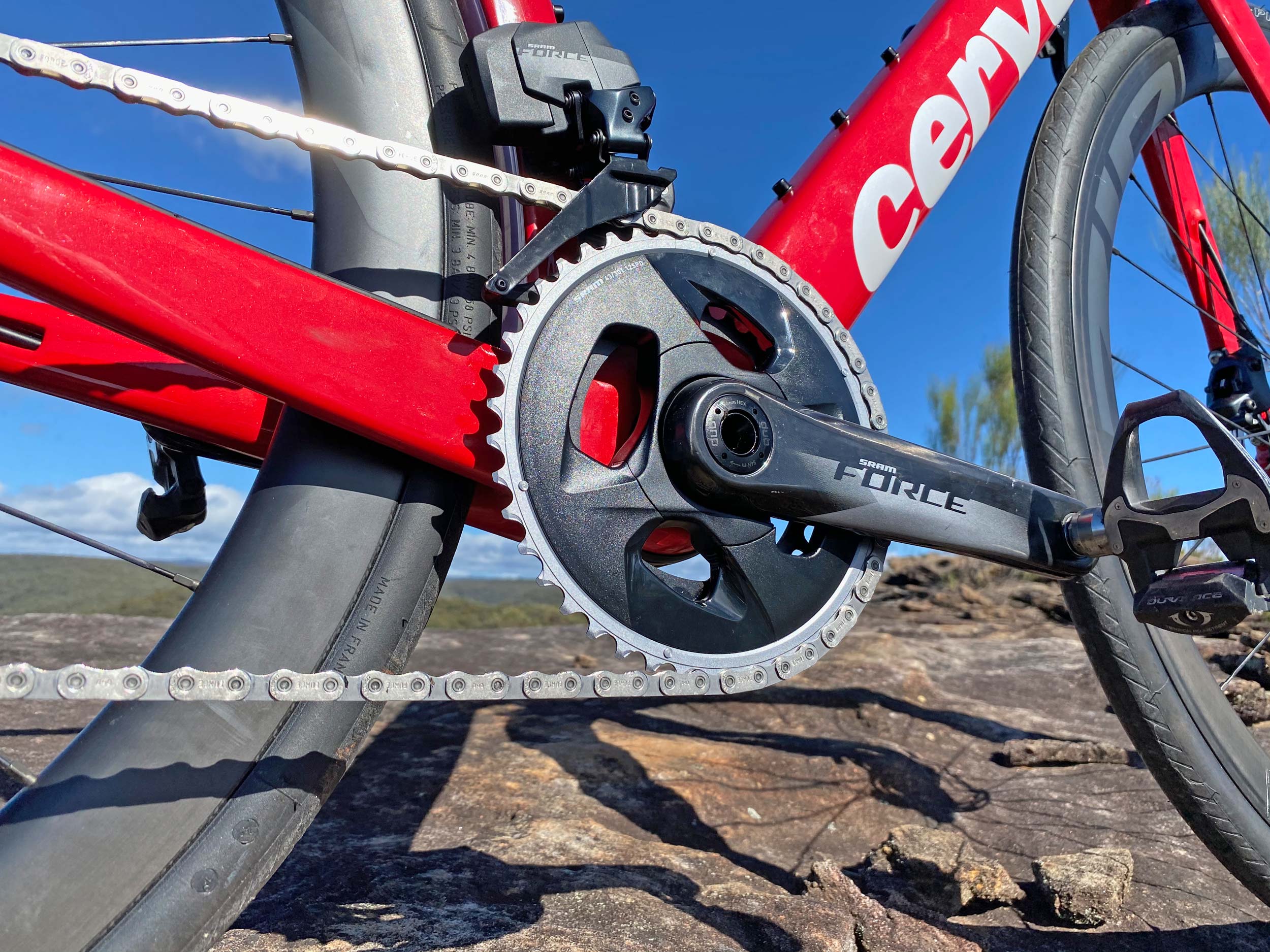 Two at a time, then three, then four… then six for the final two jumps. And that’s when you’re really spinning the cranks a lot, not going very fast – but, most likely, still able to go up a very steep gradient.

The trend off-road is for a much smaller front chainring than what you would ever use on a road bike. Early in 2021 you have choices on a groupset like Eagle: 30, 32, 34, 36 or 38. Off-the-shelf bikes usually come fitted with a 32-tooth chainring.

With a 29-inch MTB, this pretty much gets you anywhere you need to go. Put it in the easiest gear, pedal one crank rotation, move forwards ±160cm. With knobby tyres, you’ll ride steep, rough roads all day long if you want to.

If you take it to that extreme on a road bike (or a gravel bike, or a road bike pretending to be a gravel bike) you’re probably going to find yourself in some bother. Quite simply, there isn’t enough traction on the tyres to manage. You’ll pedal and, if you’re lucky, you might move forwards. The more likely outcome is that the wheel will just spin, and you’ll go nowhere, especially if it’s a little bit muddy, or sandy, or steep… or all of these things combined.

With the smallest gear option on the Cervélo Caledonia project bike – 30 up front, 36 at the rear – one pedal rotation will only move you forward ±180cm (it will vary depending on the size of your tyres). A quick tip for first timers using a road bike on the trails, don’t stand up when it gets steep!

As Anthony Challinor explains while he builds the bike in the Velofix workshop, with road tyres (like the Pirelli Cinturato 32mm used on this bike), you’re just going to lose traction. The wheel will spin. You will go nowhere. And you could find yourself lying on the gravel rather than riding over it. 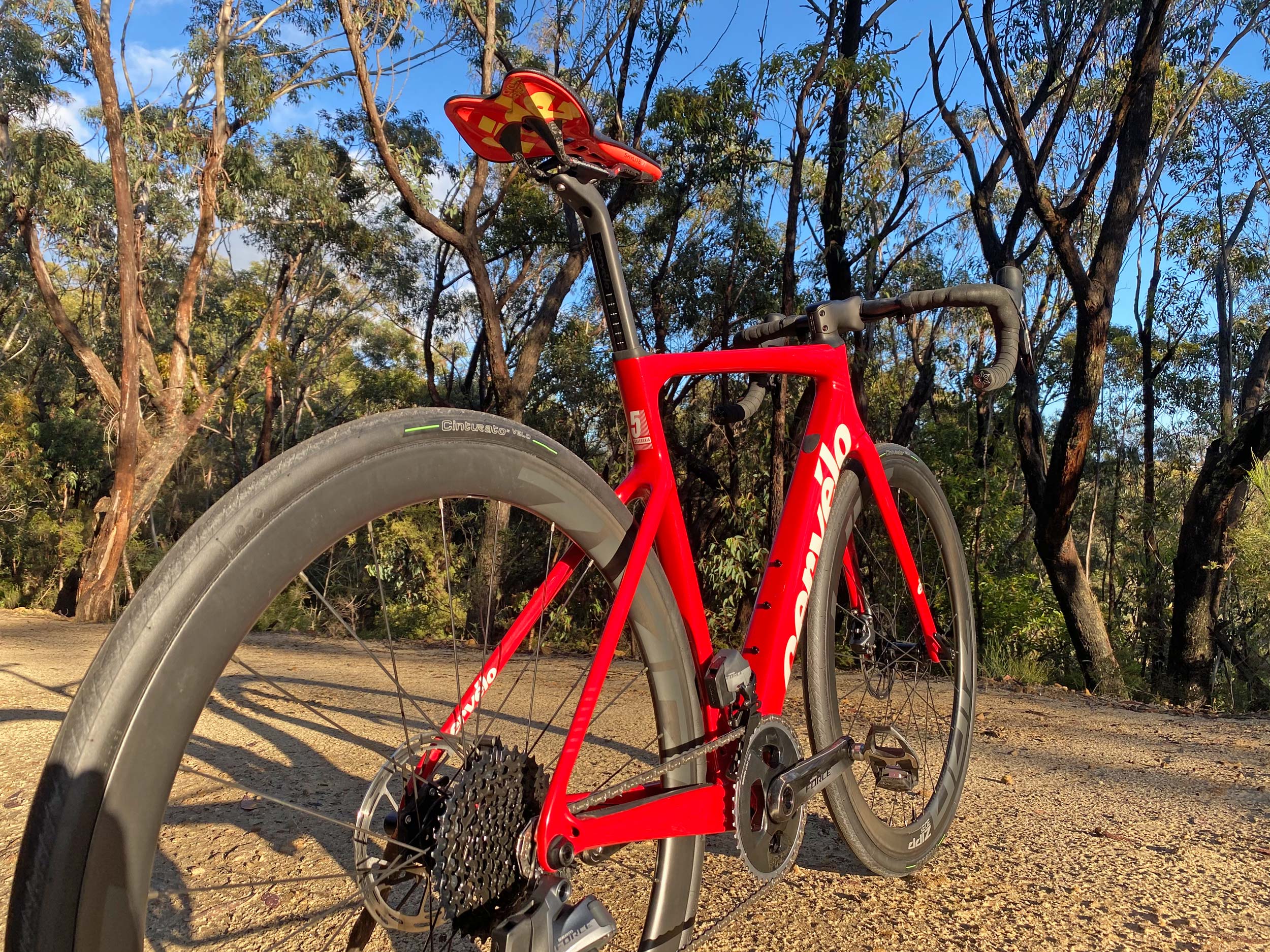 Getting a grip: selecting appropriate tyres

It is a wide gear selection, thus the name, right? Sort of. There’s more to the (slightly) modified SRAM groupset that contributes to the additional title. ‘Wide’ also relates to the fact that there is more tyre clearance. If you built your dream, extreme bike and then the knobby tyres rubbed on your front derailleur or chain when spinning an easy gear, it would quickly turn into a nightmare.

Although the tyre clearance factor may be relevant on some projects, it isn’t an issue on this bike. The kind of tyres that would impact the derailleur or chain would not fit in the frame…

And so, while the Caledonia frame will accept big tyres, Cervélo are not advocating trying to fit the kind of knobby tyres that we see on some bikes being ridden on trails in 2021.

A tyre like the Panaracer GravelKing SK (at 35mm) is about as big as you’re going to squeeze into this frame if you want a knobby tread. WTB’s Cross Boss (at 35mm) would also probably work, and there’s a selection of tyre offerings from other brands that are going to get you more grip. If you start going down that route, you’re probably better off looking for a different kind of bike.

The Caledonia is, in my appraisal, more a road bike than anything else. It just so happens that my time riding it began on the trails… but only during my brief stint in the Blue Mountains.

I’ve been off-road elsewhere and I’m not overly concerned if my exploration steers me towards trails rather than roads – it has happened often and only one time did the bike declare: too much! (That was when I attempted the so-called ‘Cannonball Run’ from Fitzroy Falls down to Kangaroo Valley. It began as a fun adventure and quickly debased into a comedic scene of slow riding, loads of swearing, plenty of unclipping from the pedals and toe-tapping over rough stuff… or worse: walking. Frankly, I’d rather forget those few hours. It started out enjoyable and quickly turned stressful.)

This bike is at home on the road and that’s essentially where I’ve ridden it since those fun times on the Oaks Trail. The wide groupset remains unchanged but, as I’ve said in a number of videos since this series began, there’s little reason for the front derailleur.

To date, I’ve ridden 3,637km on this bike (give or take a few days when I didn’t have my Wahoo Elemnt Bolt recording data). About 3,500km of this has been on the road. And about 3,635km of the total distance covered has seen the 43-tooth chainring in use… only rarely has the 30-tooth inner ring been utilised – and that’s including my off-road adventures.

The roll-out for the 43/36 combo (ie. big chainring, easiest cog on the cassette) is ±270cm; in other words, it’s still pretty easy to get up steep inclines even in the big ring… because, as has also been said before, it’s not a very large big ring. 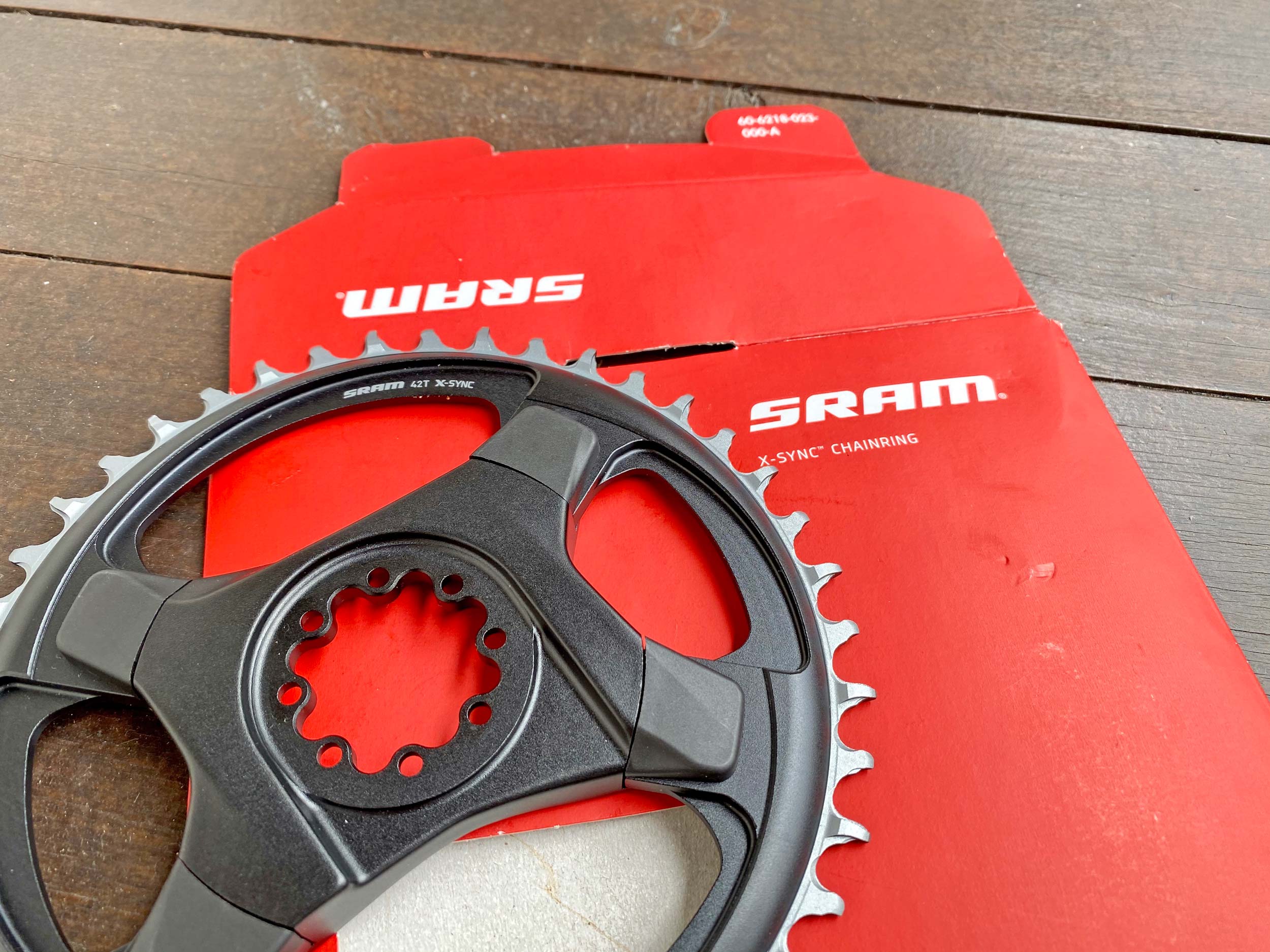 Time to go for the 1x option?

I’m not afraid of change and it didn’t take long to realise that the front derailleur was a largely redundant piece of technology on a bike like this, with a gear selection like what AXS ‘Wide’ offers. I’ve got a 1x option (42-tooth) that SRAM sent along with the 2x ratio (43/30)… but I’m resisting another trip to the workshop. Why? Largely because I’ve only ever ridden road bikes with a front derailleur.

It seems natural to have that shifting option. Even if I don’t use the small inner ring, at least it’s there should I get desperate.

Furthermore, I’m not convinced a 42 is the right option. Upon consultation with Anthony at Velofix – and after discussions with plenty of 1x converts – the gear of choice would probably be more like a 46. It’s a simple solution: go to shop, buy new chainring, remove front derailleur, swap existing configuration, and ride… but I’m not rushing towards it. Frankly, there are other things on my shopping list and I’m happy enough having the 43/30. 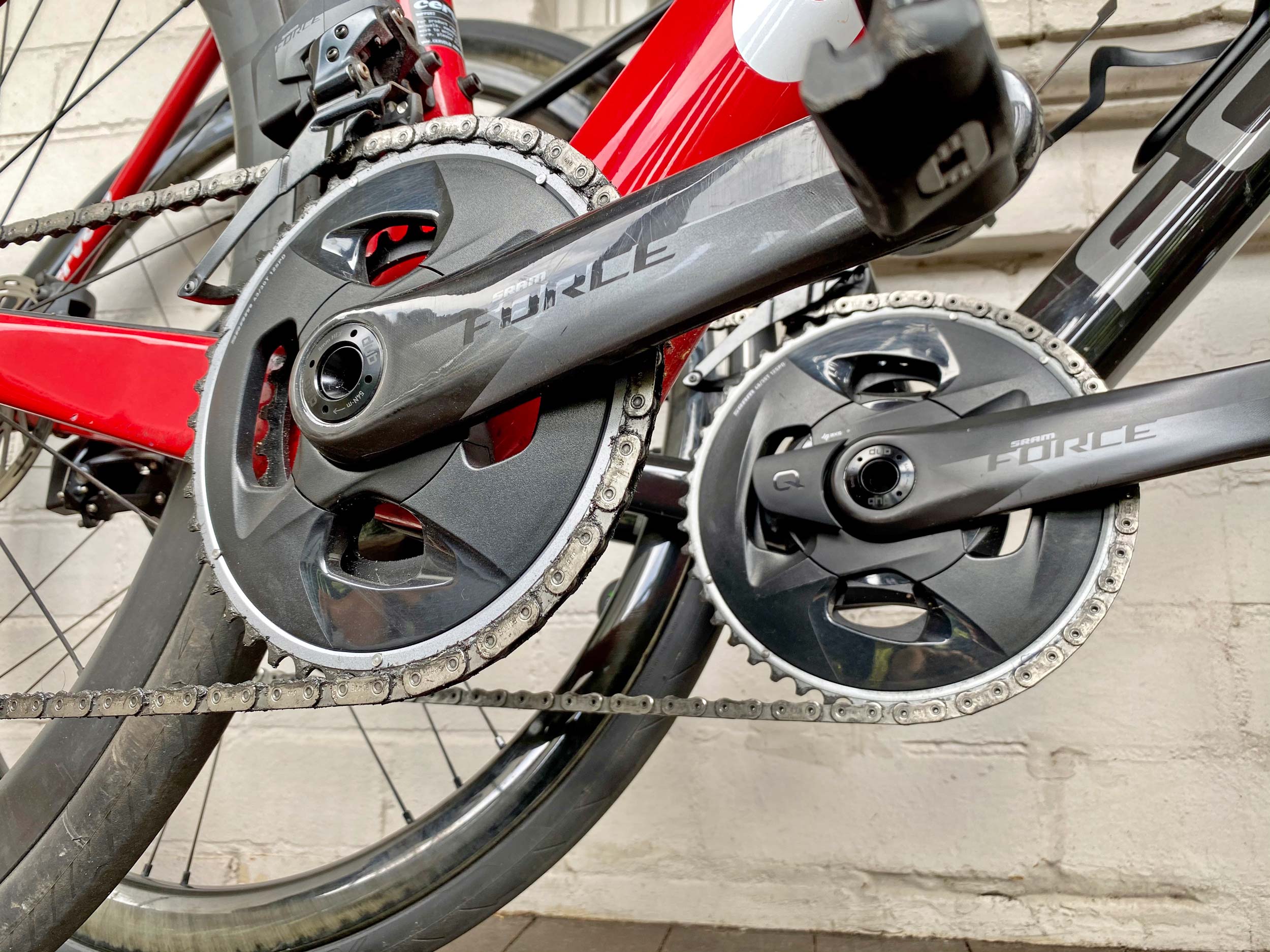 Soon: the time to choose…

Since my Cervélo Caledonia was built, I’ve rarely gone back to my ‘other’ bike, my Focus Izalco Max that is still beautifully current, and retains the title of ‘My Favourite Bike Ever’.

The Focus also has SRAM’s Force groupset but it’s not ‘Wide’, rather it has 48/35 chainrings and the cassette is 10-28. It’s a perfectly suitable arrangement for the kind of riding I do, it just means that I occasionally use the inner ring and the jump from one shift to the next (up or down the cassette) isn’t quite as dramatic.

Furthermore, the Focus has a power meter… and, of all the things that are different from one bike to the next, this is the thing I notice most – the lack of additional data. Trivial, huh?

My memories of rides on the Focus are particularly fond. It was the bike that really pulled me back into regular road riding. Until I got the Izalco Max, my MTB often beckoned for more attention than any of my road bikes.

I’m loving my road cycling again and clocking up more kilometres than I’ve done in years. Having the option of bikes is fantastic but swapping from one to the next is rarely done. I quickly get used to the handling traits, the feel of the handlebars, the gear ratios on offer, angles of the frame and other details… and I get settled.

After over 20 years of testing bikes, I know that there’s real joy in getting familiar with a bike – and staying familiar.

Of course, I know I’ll be back on the Focus again soon. And that is part of what this story is all about. Eventually, as reality sinks in, one bike will have to win out in the end. It’s not possible to ride two bikes at once and the choice will soon be made: Focus or Cervélo? Standard or ‘Wide’? Black or red?

In the coming weeks, I’m going to consider this quandary carefully and document the decision-making process. It’s not going to be simple, because there’s a lot to consider and both bikes are fantastic. Aesthetically, side by side, they have more in common than there are differences. On the road (and on some trails), there are also plenty of similarities too.

There’s a road trip in the works and the aim is to make a selection after some riding: one bike or the other – what’s it going to be? Right now, I can’t decide. I’ll keep you posted as this project continues.