At the recent Tour Down Under, riders from the Trek-Segafredo team of race champion Richie Porte used a mix of bikes: Madone for the ‘flat-landers’ and Emonda for the climbers. We talked to 2020 recruit, Kenny Elissonde to get his thoughts on the new bike… 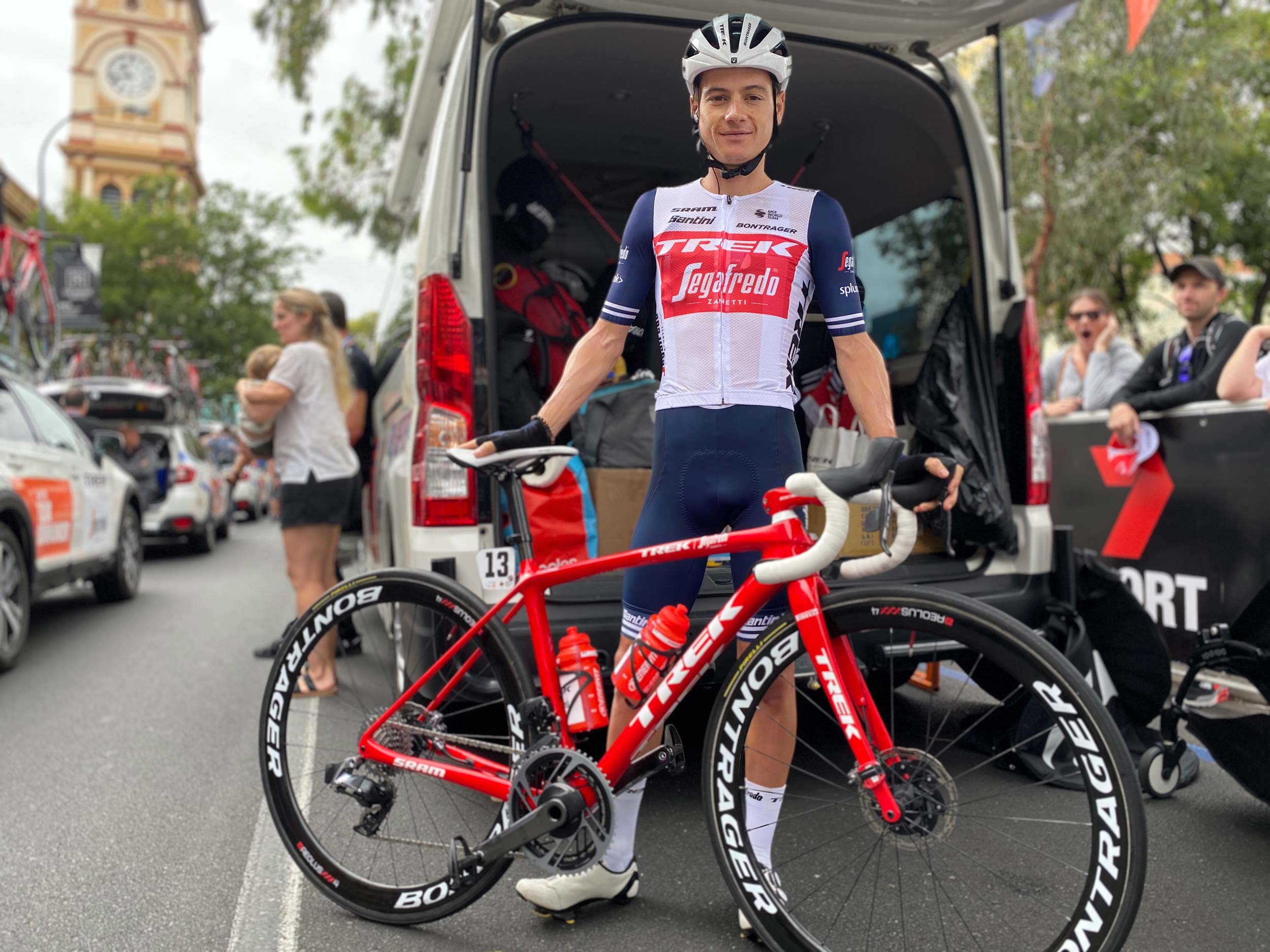 “For this Tour Down Under we brought a pretty heavily based climbing team,” explained Trek-Segafredo’s mechanic, Aaron Fairly before the start of stage four last week. “So, we have Michel Ries, Juan Lopez, Kenny Elissonde and, of course, Richie Porte riding on the climbing bike – the Emonda.

“Then we have Kiel Reijnen, Koen de Kort and Mads Pedersen who are riding more on the Madone; these are the guys that are normally doing more of the work on the flat and keeping in position before the climbs.”

In other words, light or aero… what would be your choice? 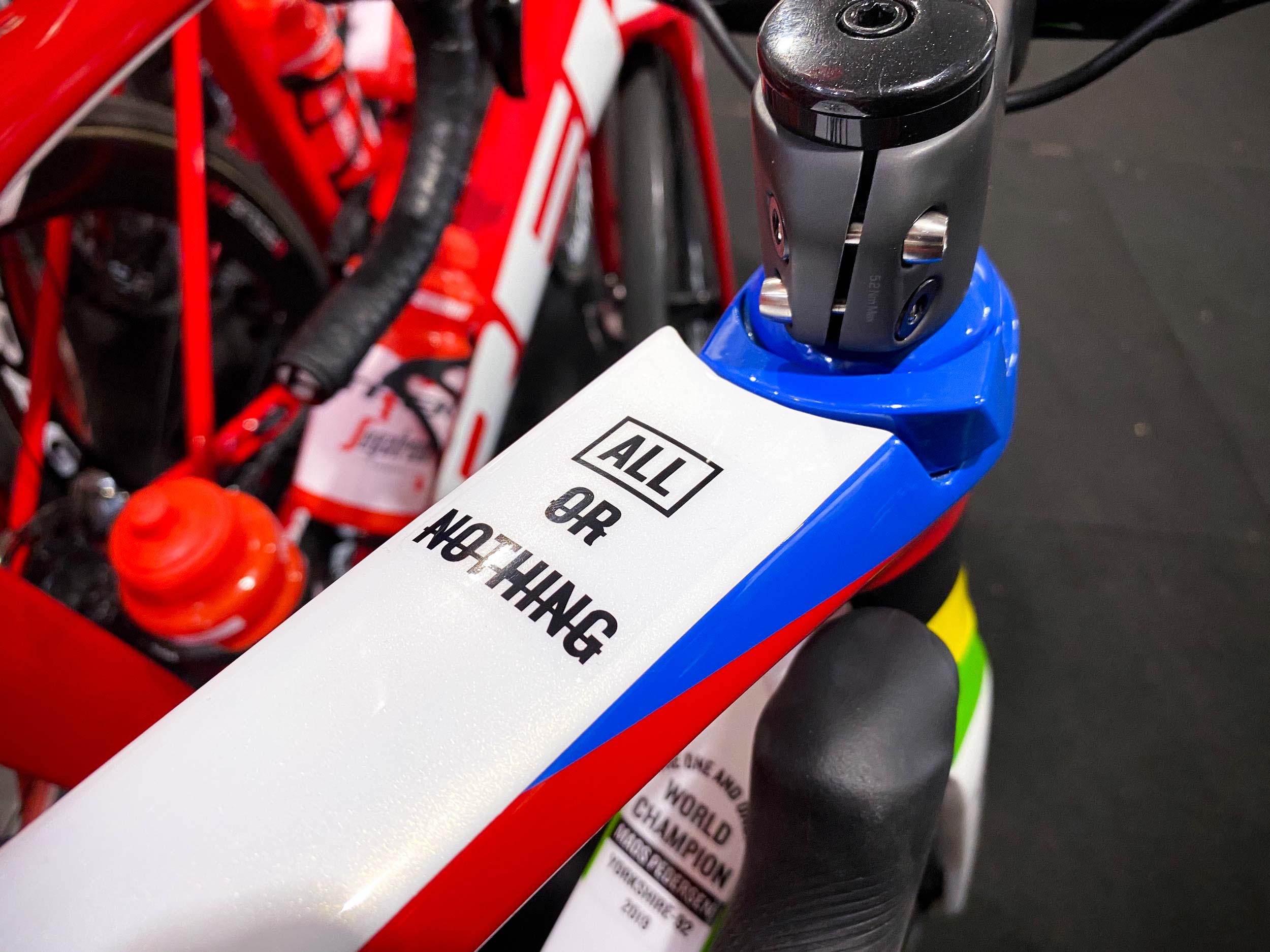 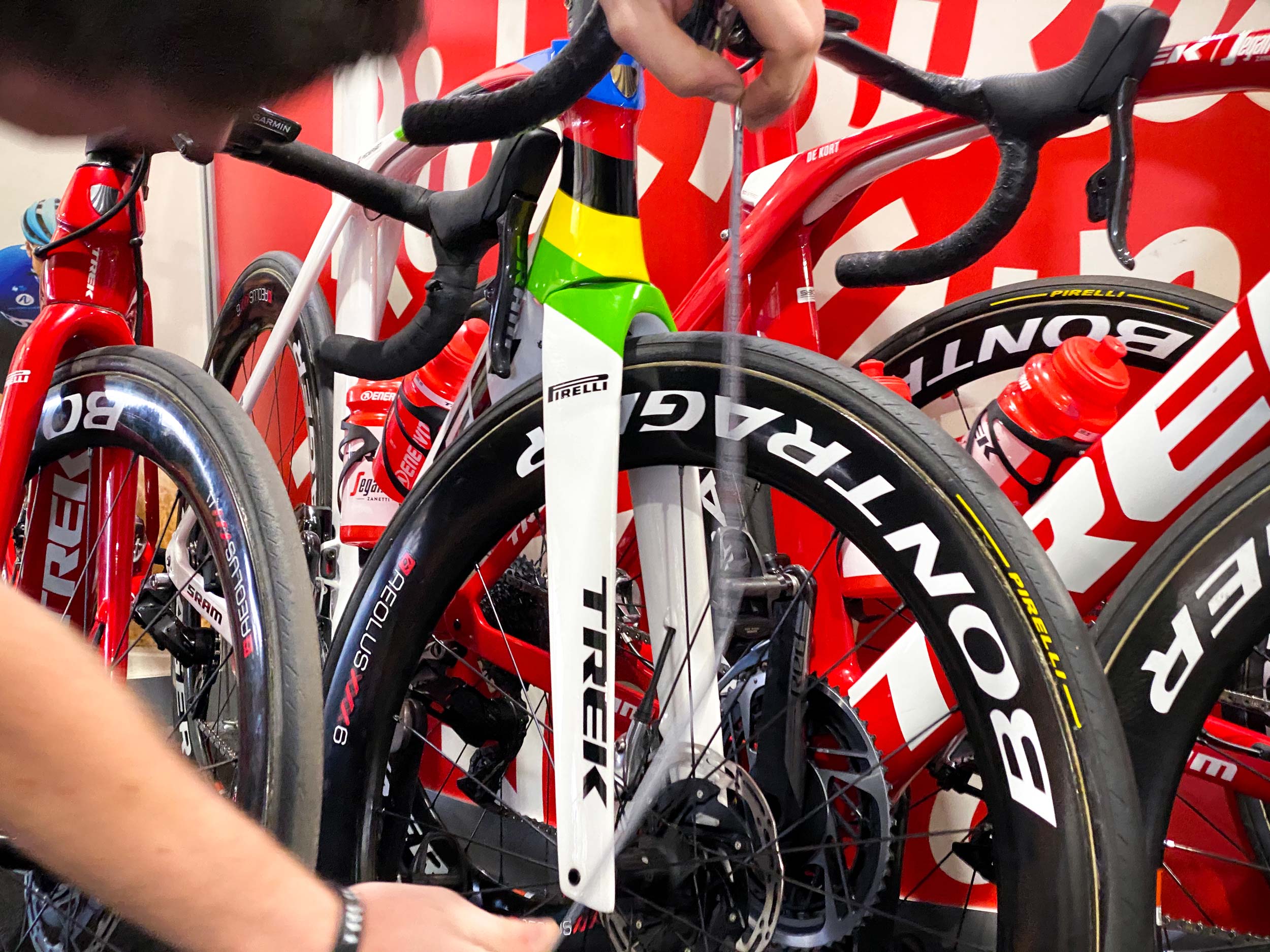 Mads Pedersen used a custom-coloured Madone at the Tour Down Under. (Photos: Rob Arnold)

For the champion of the 22nd TDU, it was an Emonda… and, as is going to be the case throughout the team for the 2020 season, it was fitted with SRAM disc brakes.

As one of two men’s WorldTour teams using the US component brand, there were some early adjustments to make after a long association with Shimano. As Fairly explained, there are some custom touches that were made available by SRAM courtesy of a request from Trek-Segafredo following the 2019 season: key amongst them, a 54/41 front chainring option.

You can’t buy this arrangement. But don’t feel as though you, as a potential customer, are being neglected. The 54/41 is only available for Trek-Segafredo riders… but, it seems, only the men are racing with it, while – Fairly says – the women’s team use either 50/37 or the 48/30. 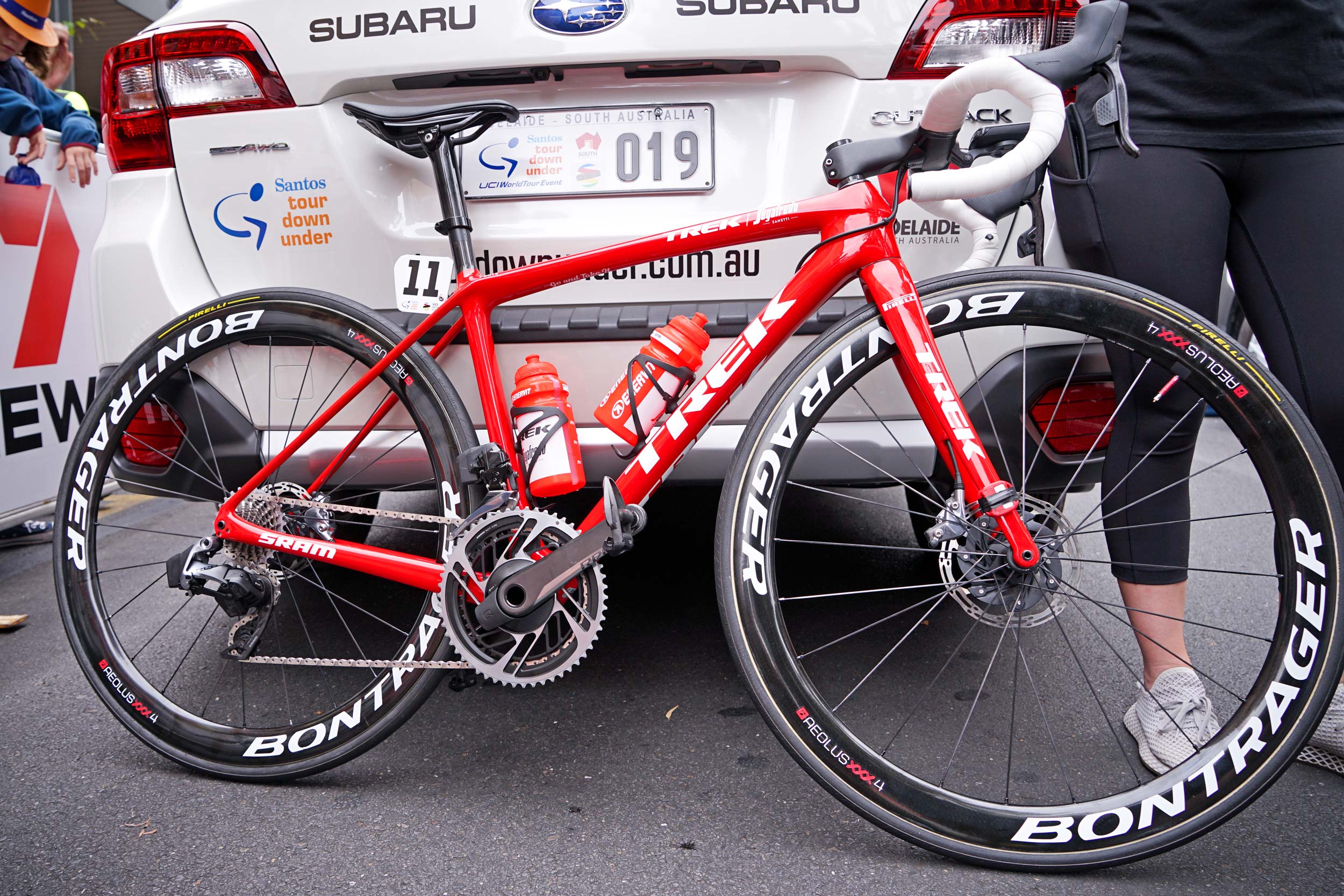 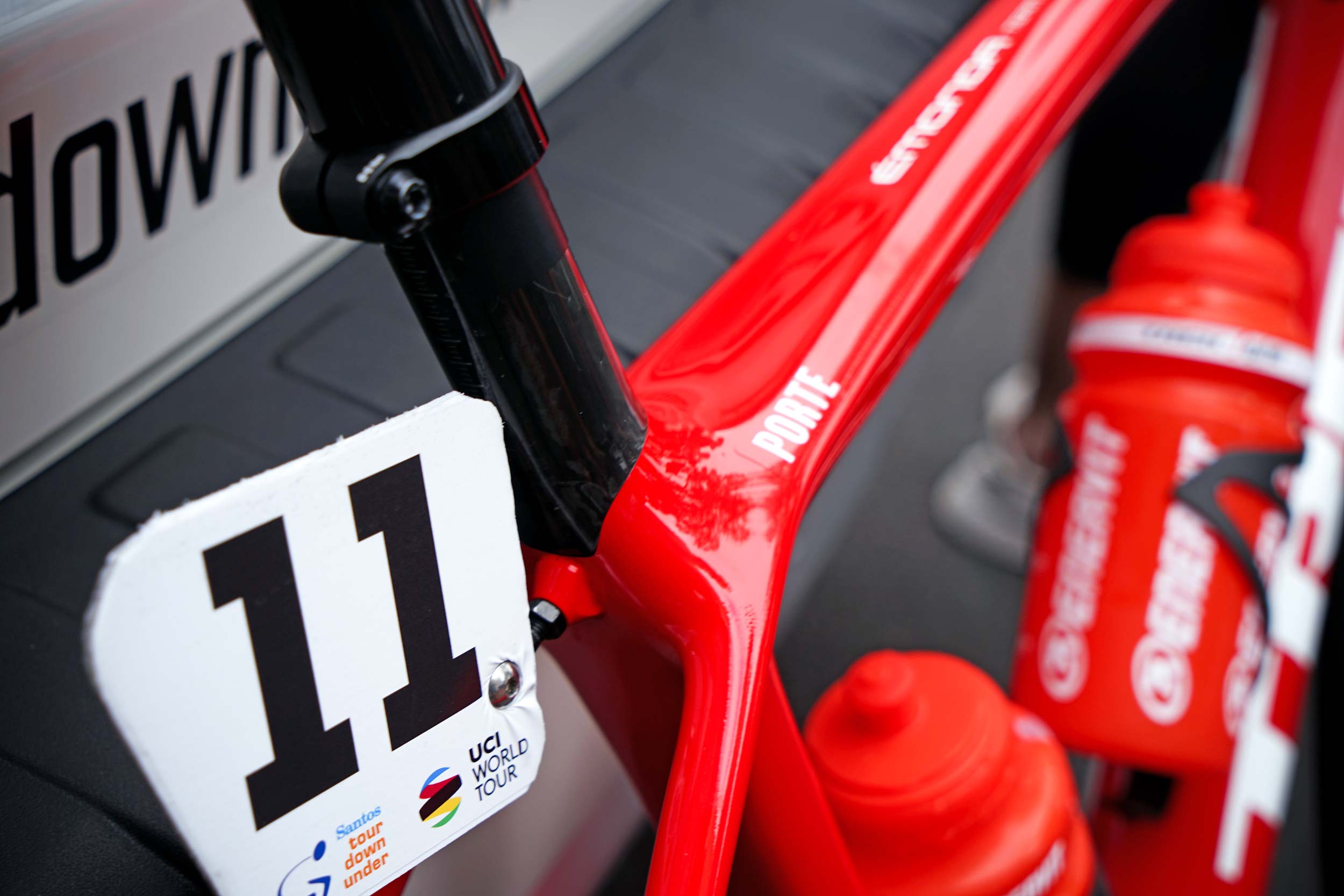 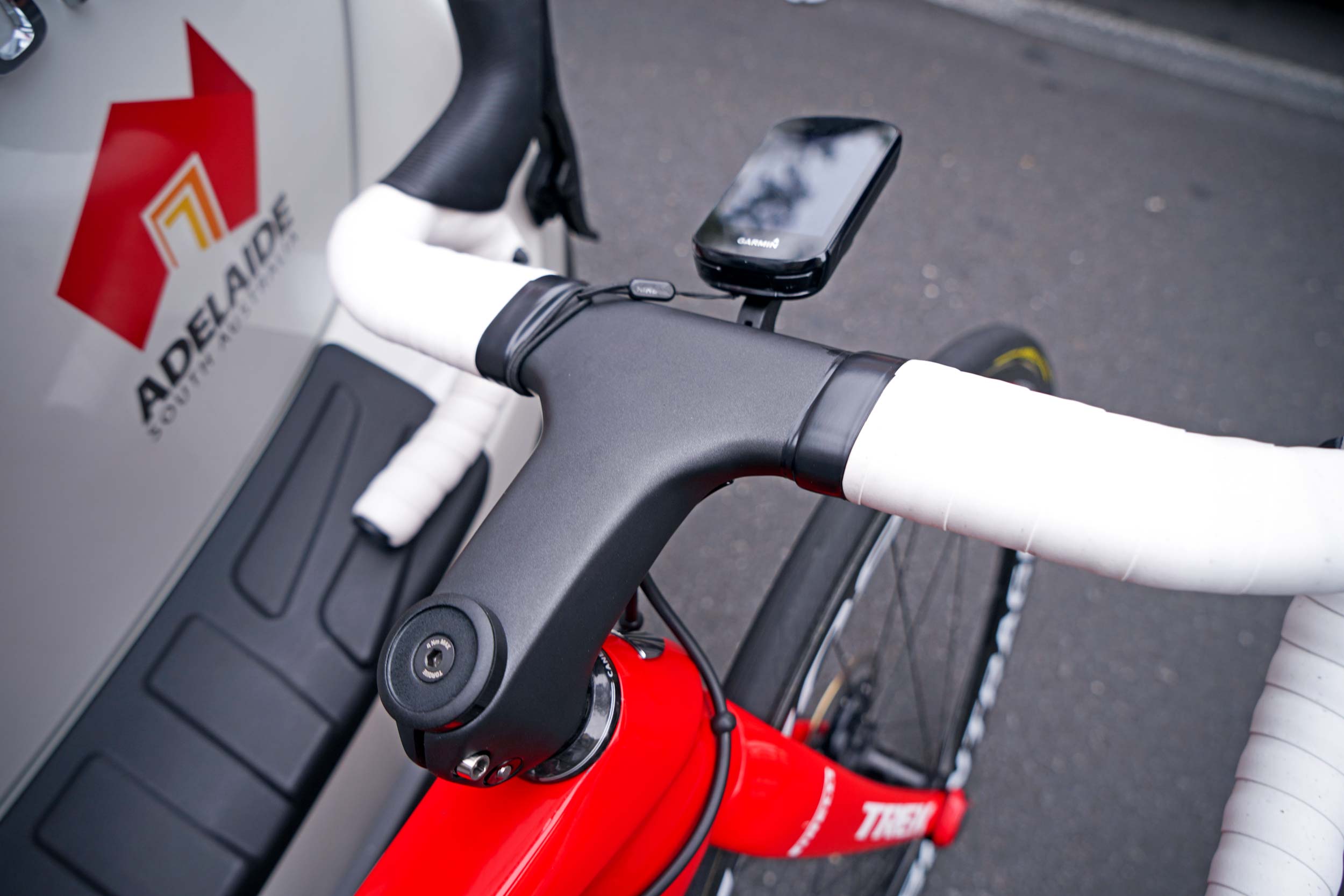 Porte’s bike features the 54/41 chainring from SRAM, as well as an integrated handlebar/stem arrangement. His climbing bike – as used to win stage three (and the 2020 TDU title) weighted in at exactly 6.8kg.

For Kenny Elissonde, there was a lot to consider before his first race with Trek-Segafredo. After three years as part of Team Sky/Team Ineos, he made the switch from Pinarello/Shimano to Trek/SRAM late last year, allowing him a short period of adjustment before competition began.

“Well, obviously, at first I had some quick adjustments to do,” Elissonde told RIDE Media last week.

“When I put, more or less, the same set up as with my Pinarello (of 2019) it was still quite different on the Trek. The geometry of the bike frame, and SRAM has bigger levers… so everything was different.

“I had a few weeks to adjust to find my right position and now it’s all day, I have to say, I really enjoy climbing on the Emonda.

“I haven’t tried the Madone yet but I’m able to comment on the Emonda which is a really great bike. It is a really light bike. And I like the Bontrager wheels.” 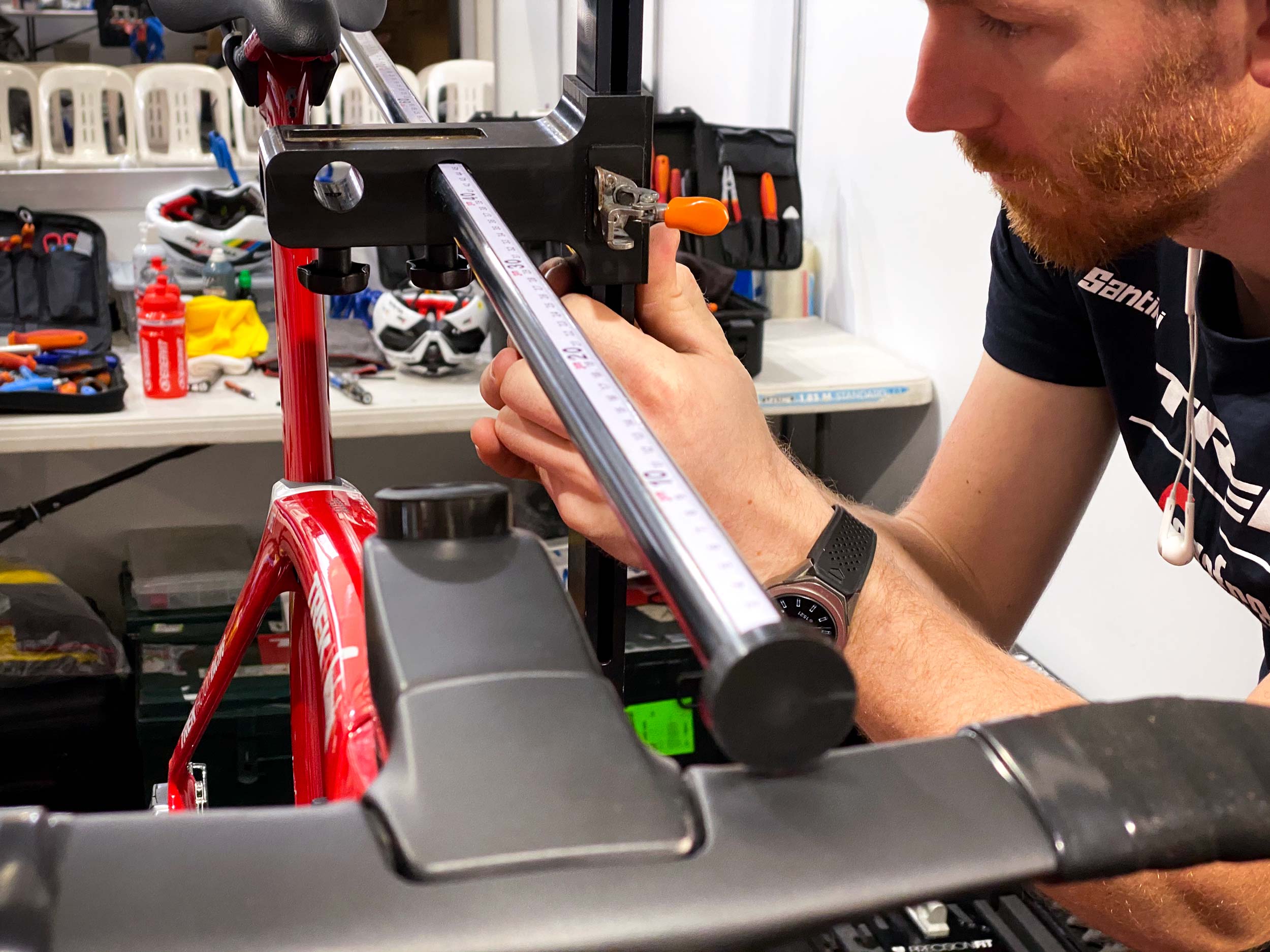 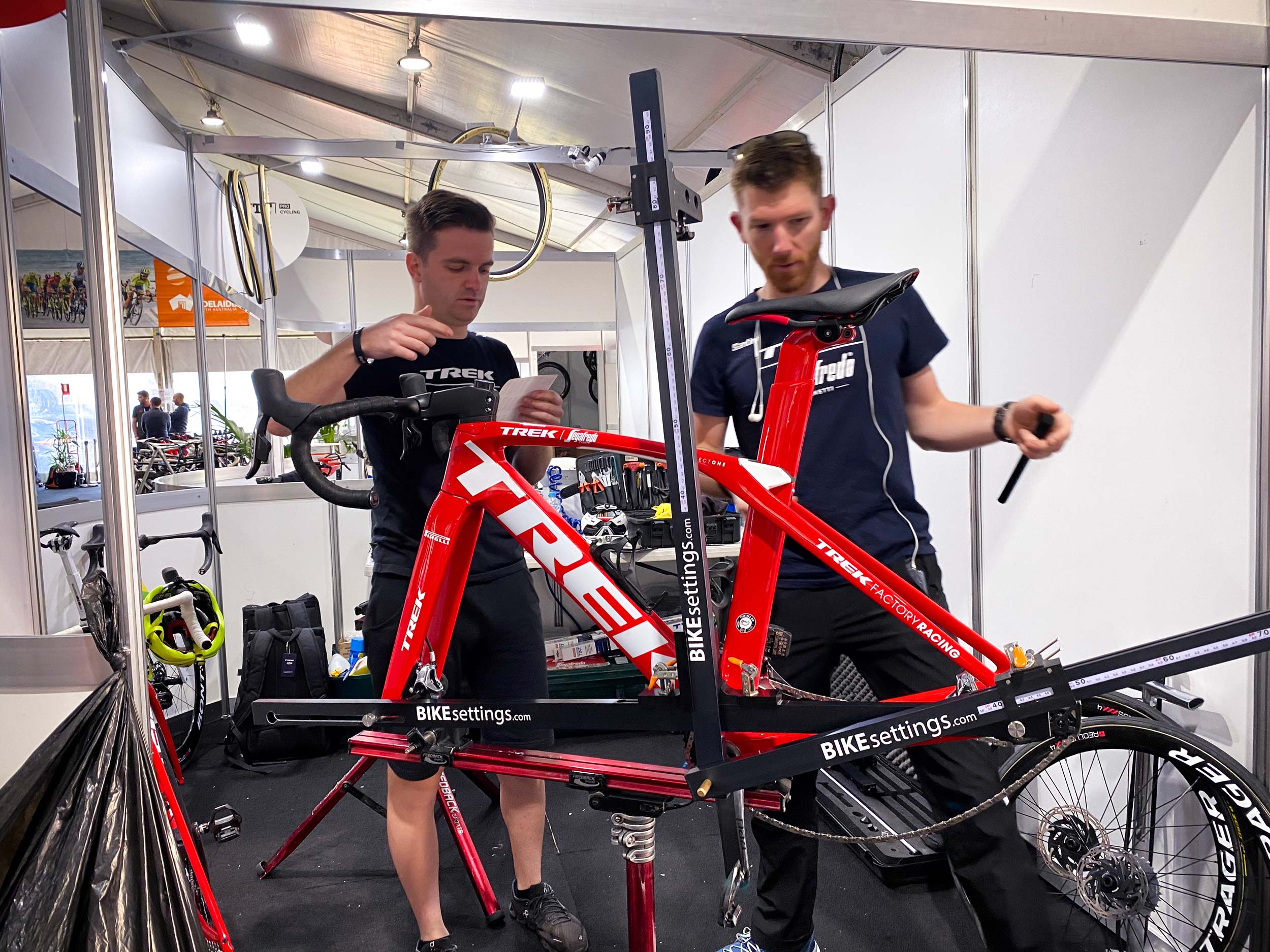 There’s a big product family for riders from this team to choose from: it is, after all, a squad owned by the bike brand (with co-title sponsorship from a coffee company) – and Trek also boasts an in-house range of components, everything from shoes to helmets to wheels and tyres and saddles… and lights and clothing (but that’s another story, and you can check the catalogue and/or site to find out more).

Curiously, despite the close link between the team and Bontrager, there was a recent announcement of a partnership with Pirelli, the tyre brand that is rapidly making headway into the cycling market.

There is a wide range of tyres on offer but, for the moment, Fairly says they’ll refrain from going to the tubeless option (both wheels and tyres)… even if he believes it’s inevitable that the switch will eventually come. 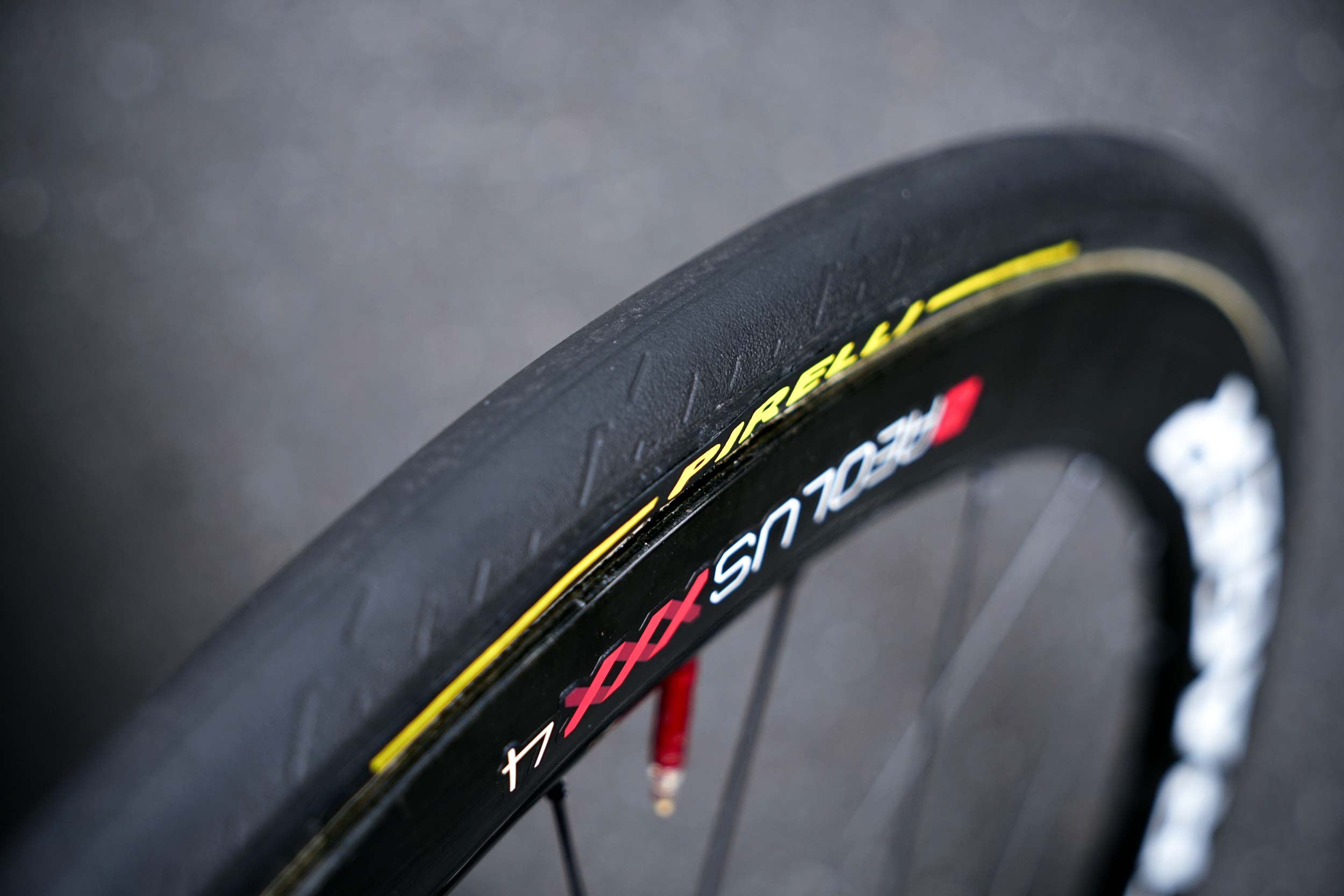 Elissonde continued his appraisal of equipment while standing behind the team van in Norwood, with Richie Porte (and his wife and child) standing nearby awaiting orders from the race starter.

Porte, Elissonde and neo-pro, Juan Lopez, all ride small Emonda frames and their choice of wheels changes depending on terrain.

“Yesterday I rode with the Aeolus 2, which are the climbers’ wheels,” Elissonde continued. “They are really awesome and with the wind in stage three, I was really comfortable. But I really like the Aeolus 4 because it’s more versatile – you can use it almost every day.

“Even if, for Willunga, I will still use the smaller rim – because I really like it, and you can still win a few grams – with the deeper rims, sometimes you gain a few grams but you lose out with aerodynamics.” 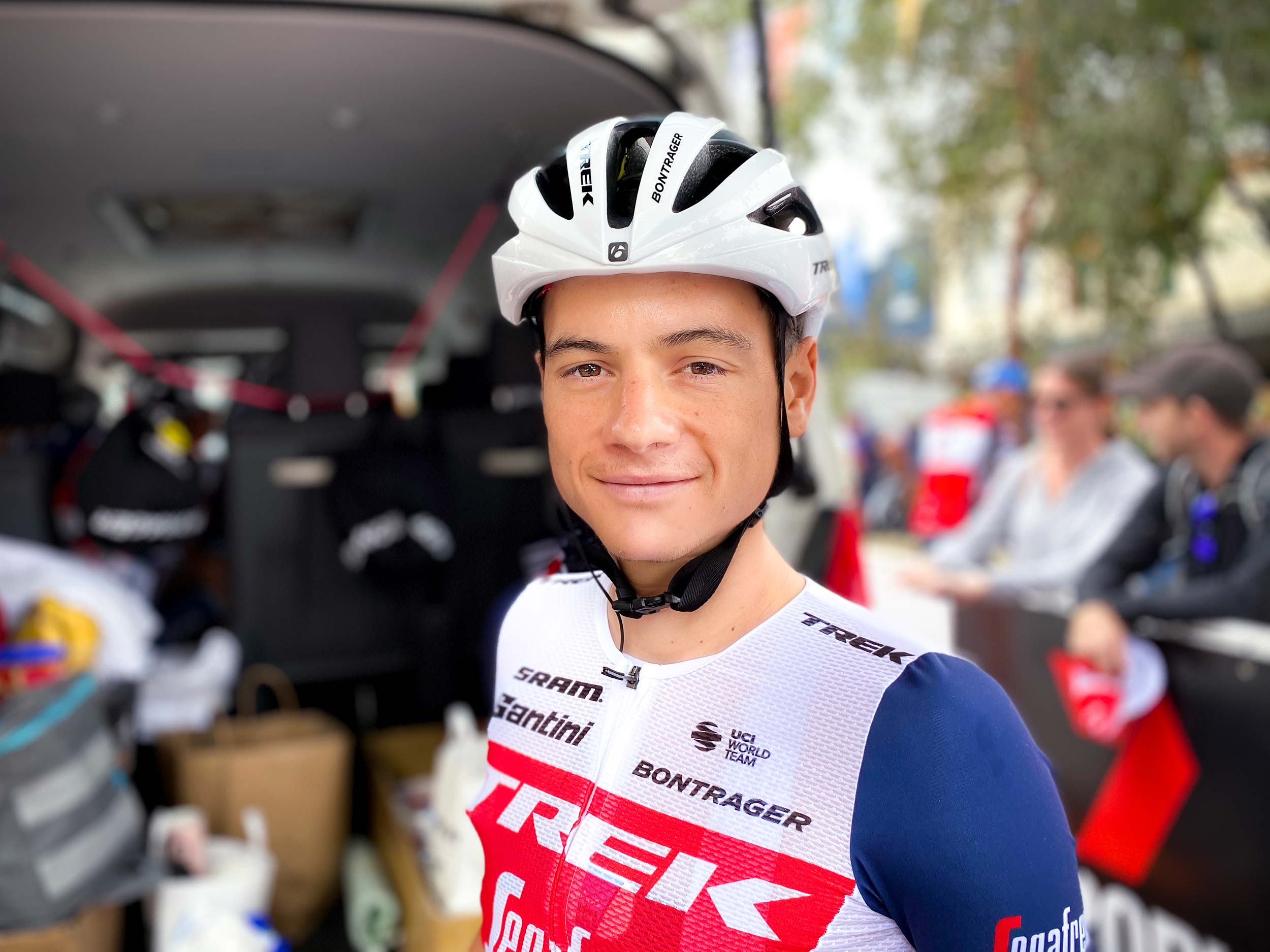 Weight remains a talking point in the peloton. And now that disc brakes have become so popular, there’s a new quest for mechanics to get down near the UCI’s limit of 6.8kg for racing bikes.

For years, it was common for mechanics from many teams to include ballast in the frame (or components) to ensure that they weren’t pinged by UCI scrutineers for having a bike that’s too light, according to the rules. Fairly says, with disc brakes, that’s no longer necessary. But, he adds with a grin, “Richie’s bike for stage three (which he won) was exactly 6.8kg”.

The wheels make difference and, as Elissonde notes, there are benefits for both the low- and high-profile rims.

Before he started racing with the team, Kenny visited the Trek facility in Waterloo, Wisconsin and saw a range of Bontrager wheels being built by hand. He also got an appreciation of Trek’s artistic capabilities with the paint workshop that’s also responsible for the popular ‘Project One’ colourways and designs.

“I went to the Trek headquarters and I saw everything from the painting and got to meet a lot of the staff,” Elissonde told me. “That was pretty impressive and I feel more close to the company now.

“It’s just a little thing but they are great people and it’s pretty cool to meet them actually.

“We also went to see the SRAM people at the factory, and that was cool too.

“It’s not just about riding the bike, it’s also about the bigger family that we are now part of, working together. And we try to give them some feedback and ask questions so that everybody is on the same wavelength as we try to improve the product.

“It is a relationship we don’t normally have.”