As we look back the the first Australian victory in Paris-Roubaix, let’s take a moment to consider the bike used by Stuart O’Grady and his CSC team in 2007: the Cervélo R3… 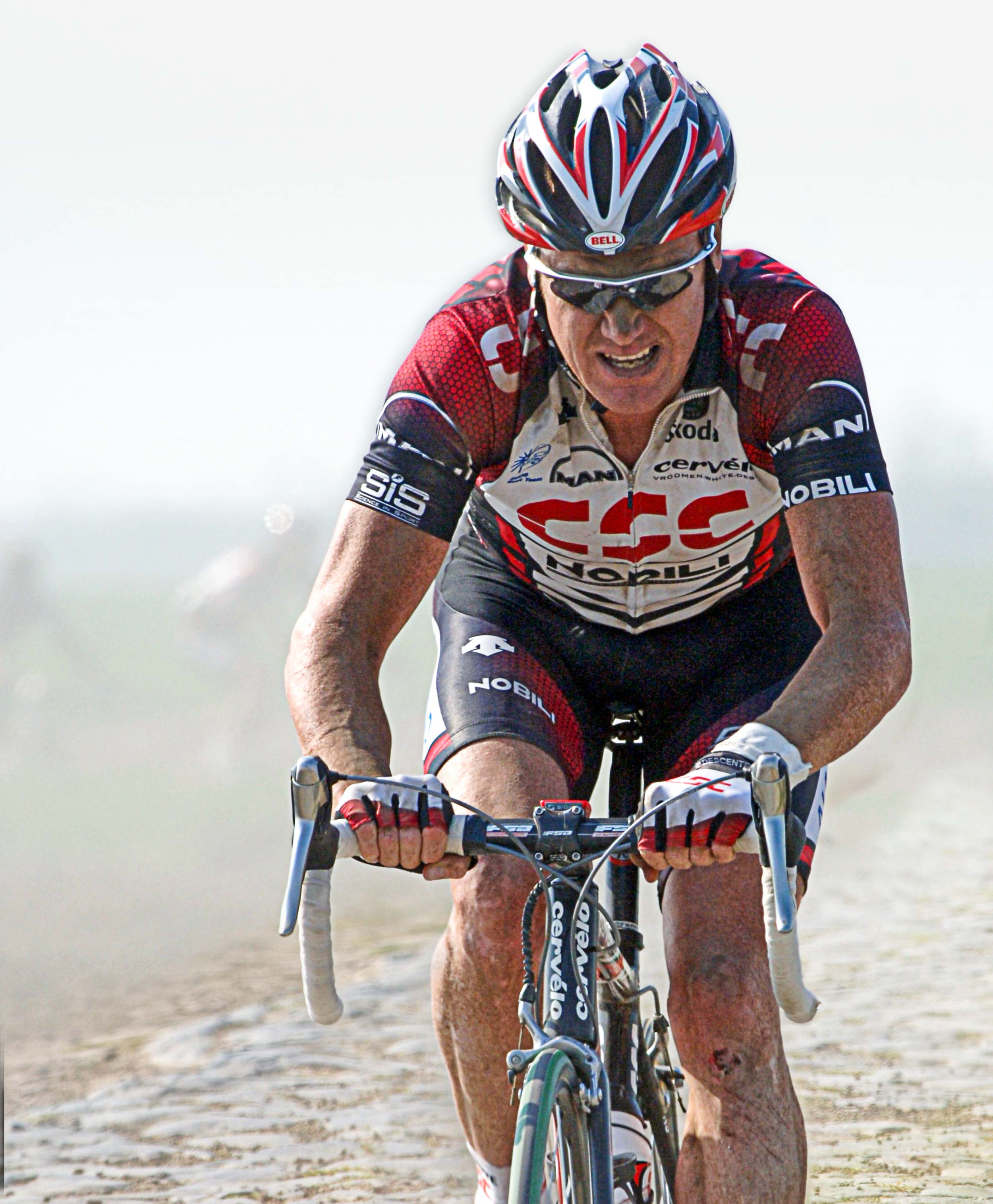 The bikes used for Paris-Roubaix are just one of the many sideshows thrown up in a race that has it all. Cobbles, crashes, punctures and weather conditions either leave the riders covered in dust or mud.

While the surface of the pavé can either be slippery with sand when dry or a quagmire in the wet.

It means that the equipment used must be modified if teams want to make it to the finish. 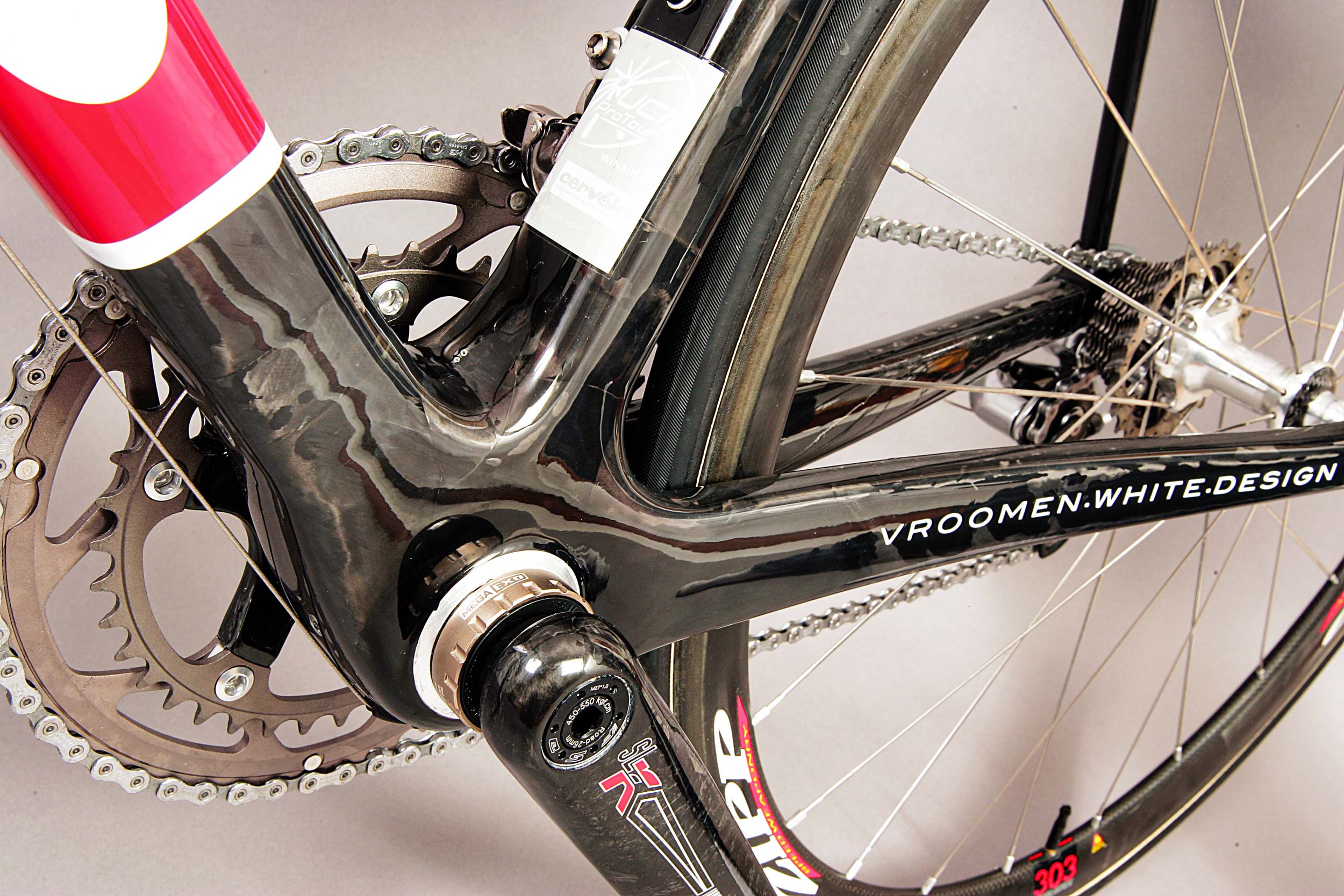 Though unconventional, the lines of the R3 flow beautifully. It was common at the time for bikes to boast enormous chain stays as well as considerably large seatstays… but the R3 shunned that line of thinking, to an extent. The chainstays remain bulky but the seatstays are more akin to the tubing used on steel bikes of the past…

Most riders will opt for aluminium frames for the Enfer du Nord instead of the standard carbon-fibre models used for most of the year.

An increase in weight equates to higher reliability on the 28 sectors of pavé, so solid, box-section rims with up to 36 spokes are chosen to see riders through the day of torture.

Many will still puncture despite the modified equipment, and it’s a busy day for team staff and neutral service alike.

Stuart O’Grady finished the race with both wheels provided courtesy of Mavic’s spares service motorbike. This wasn’t for lack of trying to make his bike as bombproof as possible on the part of Team CSC. 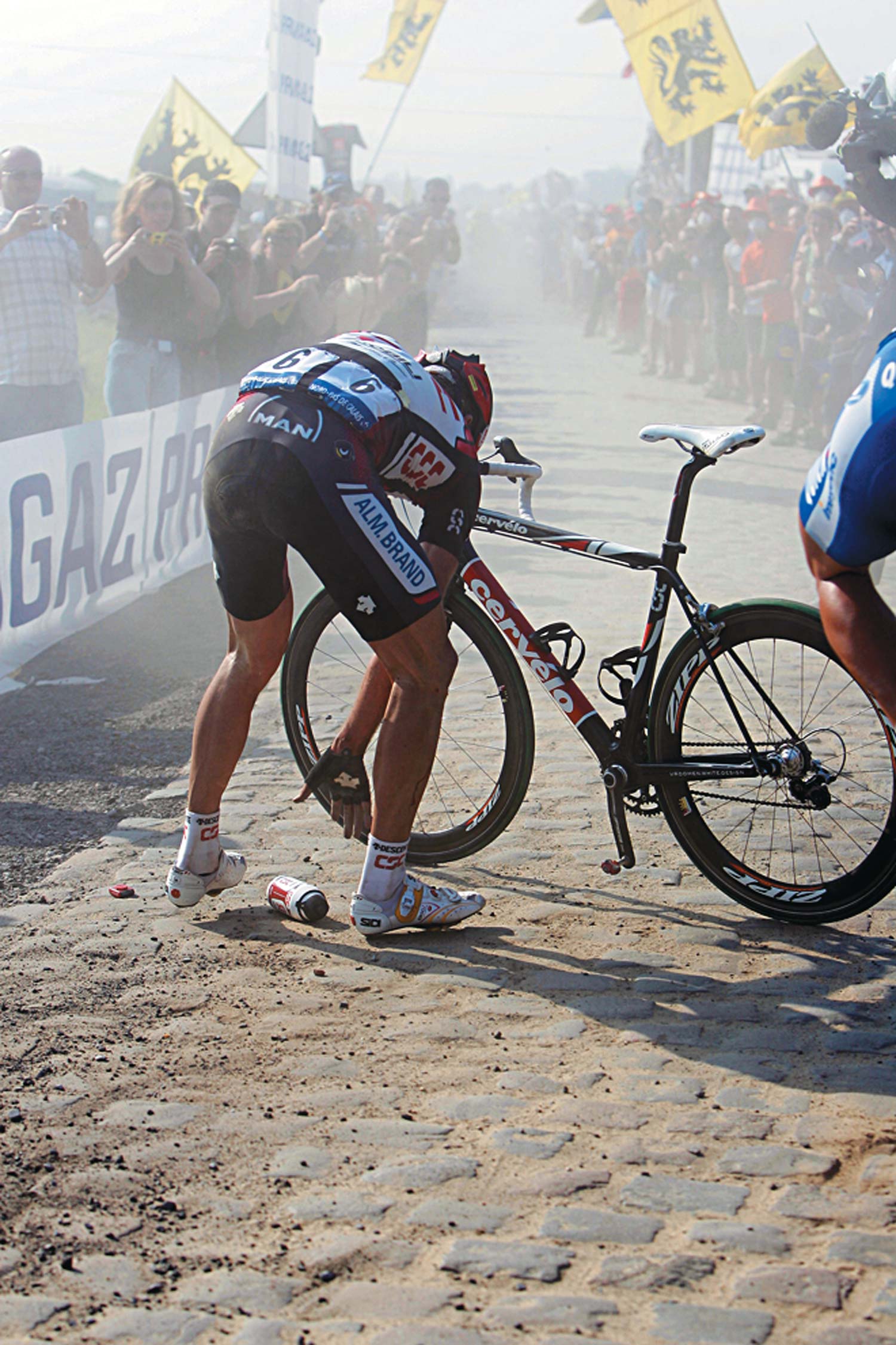 “Due to the sandy conditions we had other bikes with carbon wheels and different tyres that had more pressure in them,” said Sunderland about CSC’s dual bike strategy.
“Lars Michaelsen (above) changed the bike so that he had a clean chain and the gearing would be working 100 per cent for the sprint in the velodrome. Unfortunately he came back too quickly after changing bikes and slid out… that ended his chances of being on the podium.”

“It was the same as last year; the frames were one centimetre longer in the rear triangle and the fork had a centimetre more rake,” said CSC’s directeur sportif for Paris-Roubaix in 2007, Scott Sunderland.

“Instead of it being 46mm like normal bikes it was 50mm,” he added. “It was a reinforced, stronger fork as well which made it a bit heavier but the strength gave the riders peace of mind.” 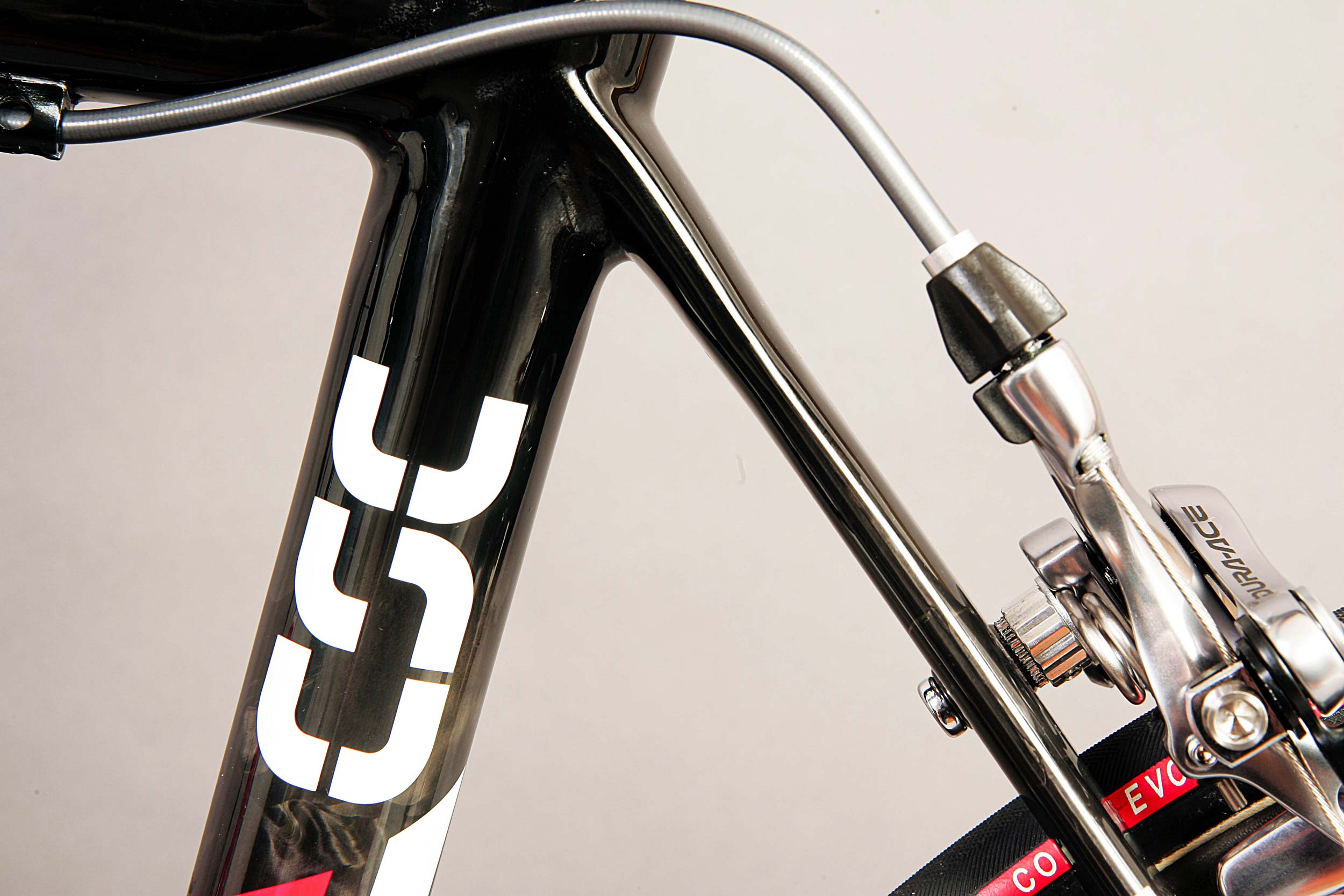 The diameter of the seatstays is just 0.9cm. It’s small even when compared with traditional steel frames and is a stark contrast to the rest of the R3’s carbon tubing. Cervélo specified the largest standard seatpost diameter available in 2007 (32.4mm).

Sunderland, whose experience in the race as a rider proved invaluable over the course of the day, also explained that contact points such as tyres and handlebars were beefed up to absorb the constant shock of the cobbles.

“We used bigger 27mm tyres and had some special gel pads that go underneath the bartape. Except for Fabian Cancellara — he just rode normal handlebar tape.”

Note: studio photos of a review bike from 2006, not actual race bike used by Stuart O’Grady. 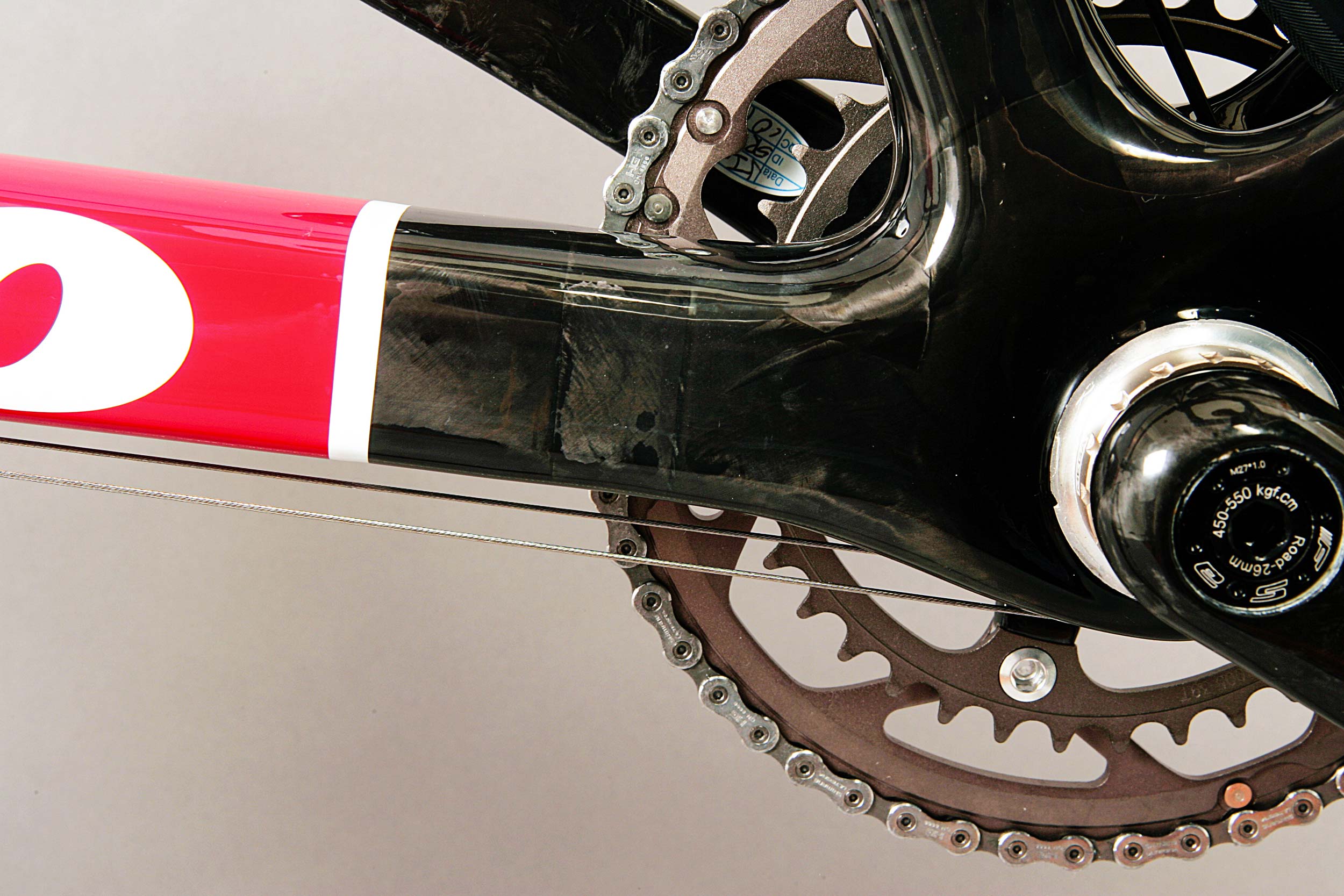 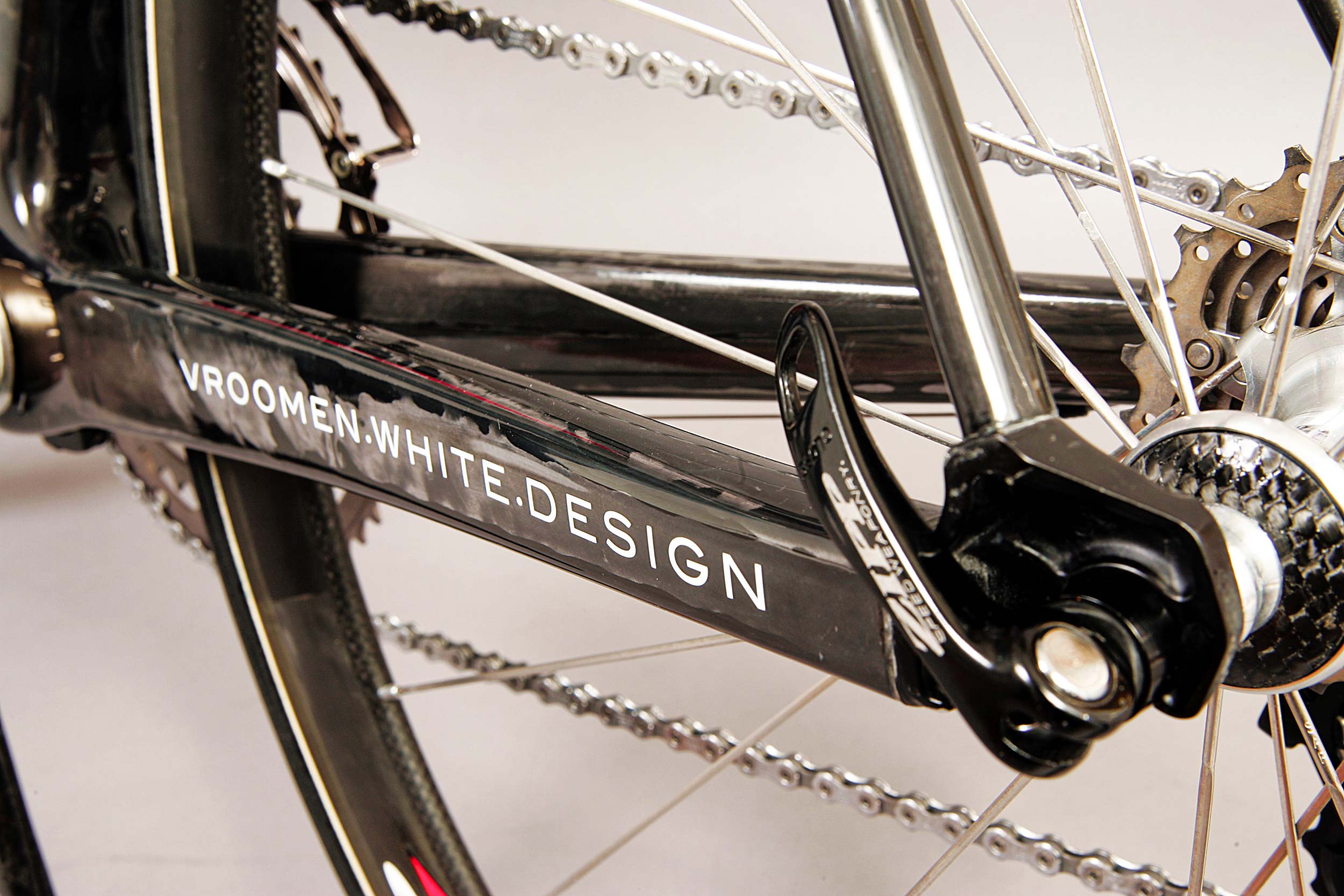 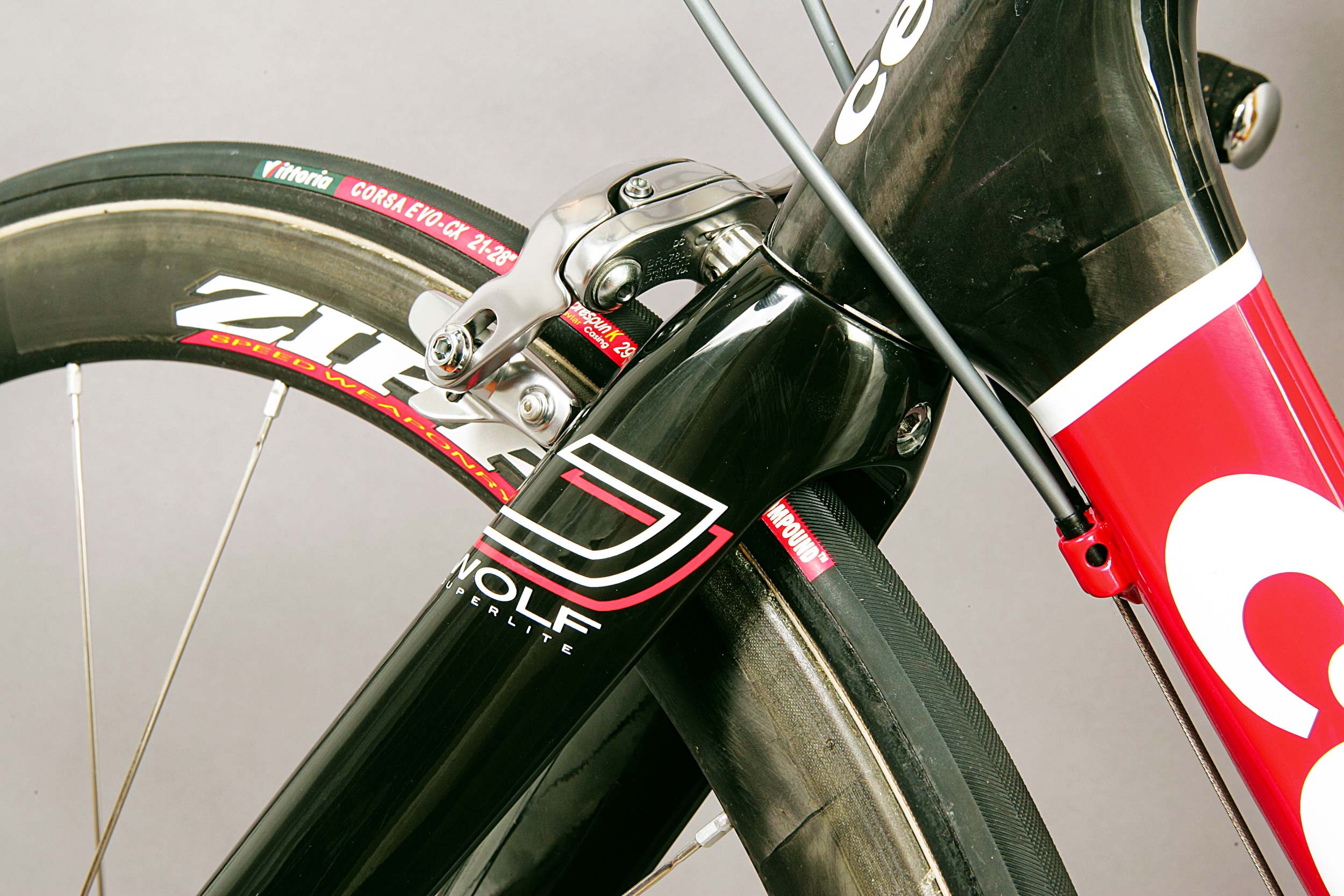