Story of my bike: Cervelo R5 by James Werner

Bright green, light and “comfortable for a race bike”, the Cervélo R5 of James Werner hangs on display at Bike Gallery in Melbourne. He took 10 minutes to explain the story of his bike.

“I think it’s an Australian-specific colour,” says James Werner about the emerald green finish of the R5 he has been riding for a few months. It is certainly bright. And the colour does change quite dramatically depending on what kind of light is shining on it.

Dark from one angle, it sparks up – in an almost luminescent way – when tilted towards the sunlight.

– Watch James Werner’s ‘Story of my bike’, click the link below –

Days before an impromptu vox-pop, James had enjoyed a solid stint on the bike. He’d had a “big weekend of riding” and when I asked if he would mind talking through the highlights of the Cervélo R5, he never hesitated. He did, however, regret that it wasn’t sparkling clean.

The bike was on display in the showroom of Bike Gallery, but only because James works there and he’d ridden in earlier that day.

“It could do with a bit of a clean,” he told me. But I explained my preference for these features: to capture the bike as it is – no pre-clean, no fuss, no need to gloss things up.

Even though there is a bit of grime on the cassette and 44-tooth chainring, it still looks great. And the emerald green certainly helps it stand out from a sea of black frames that are so prominent in showrooms in 2019. 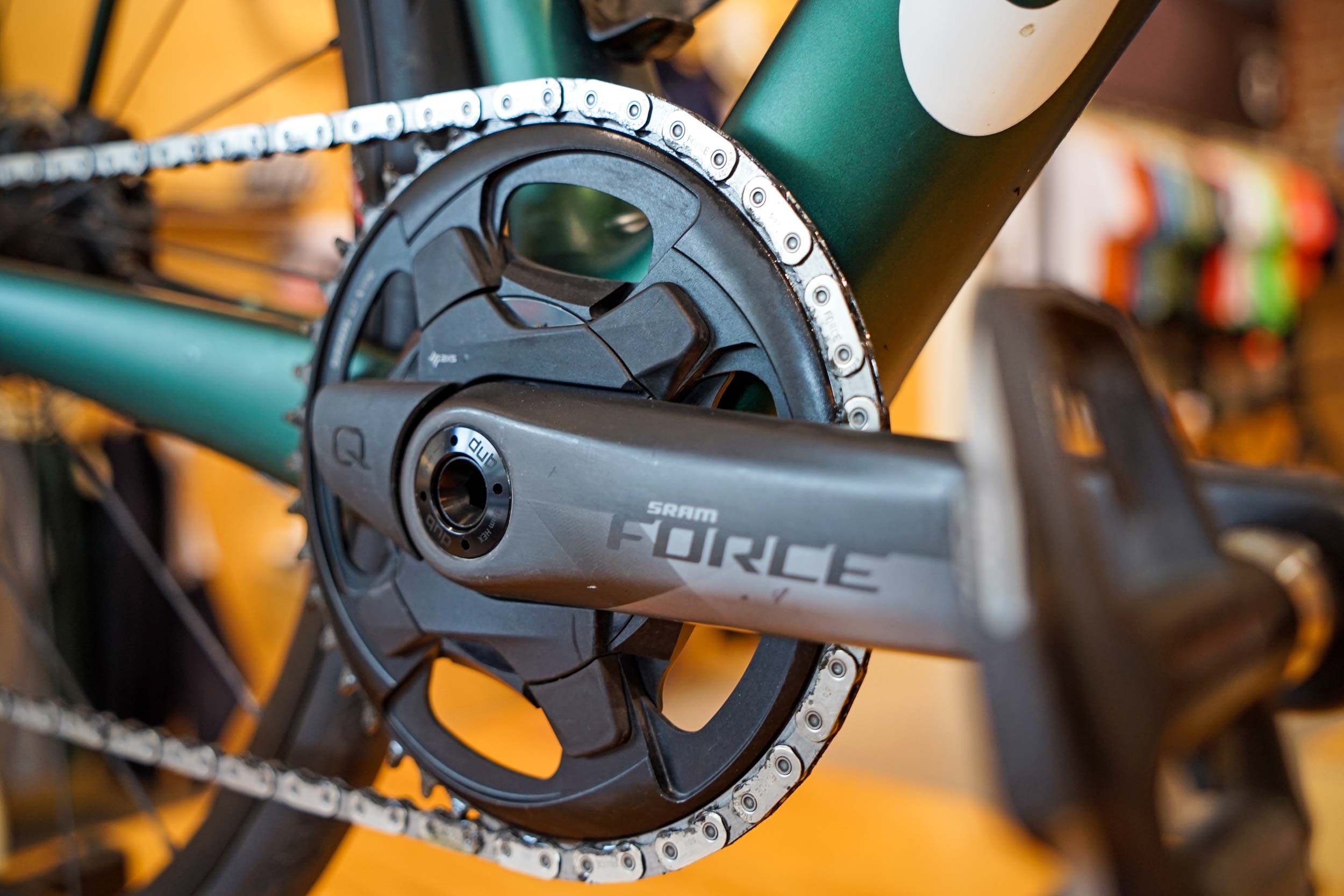 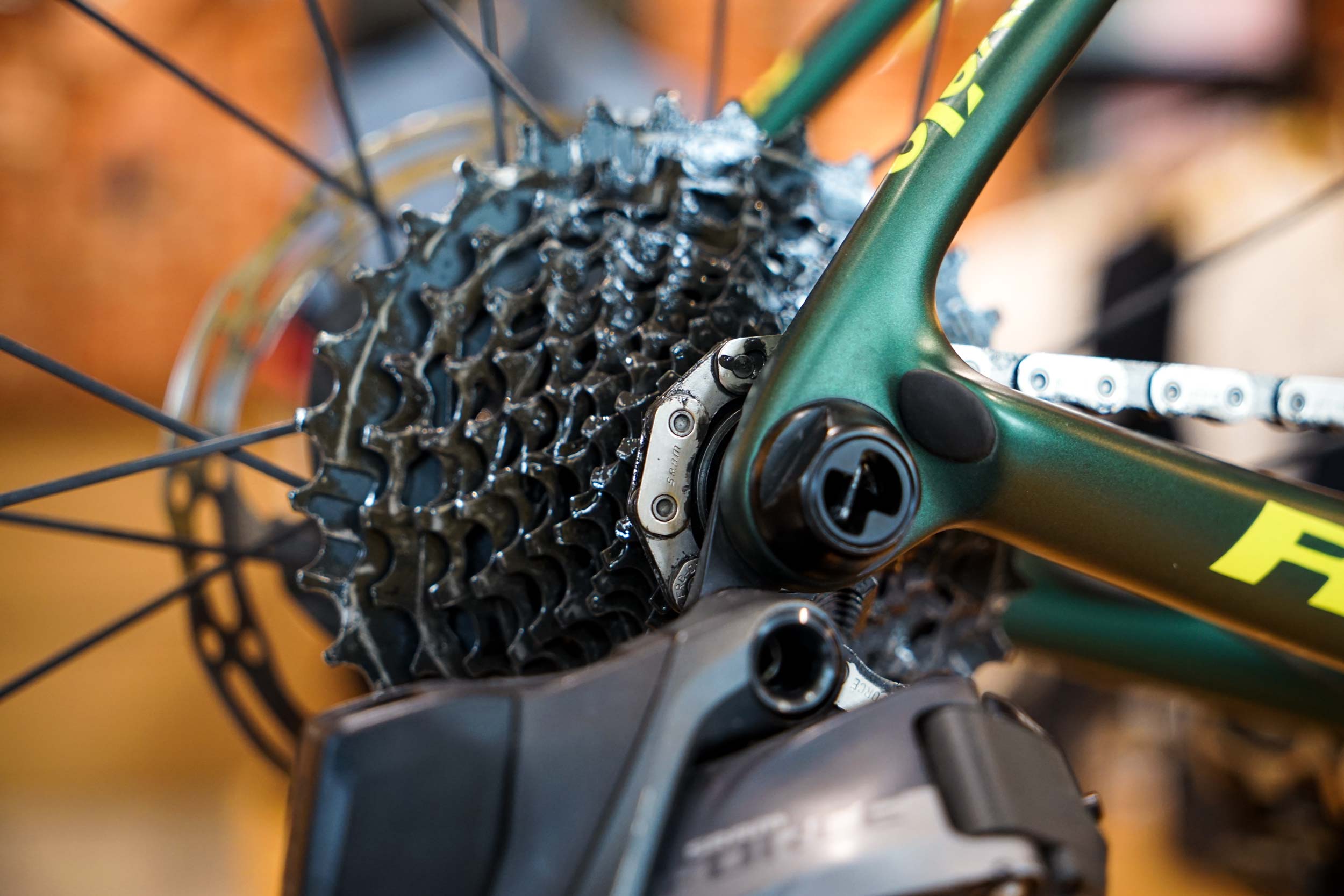 The 44/10-33 ratio is possible thanks to the 12-speed cassette from SRAM’s relatively new Force AXS release.

It offers wireless electronic shifting but because of the 1X arrangement, James doesn’t need the sequential option on offer through the SRAM app; there’s no front derailleur, less chain wear, a clean appearance (even when the bike is dirty), and a range that gets him up and over most climbs without too much strain. 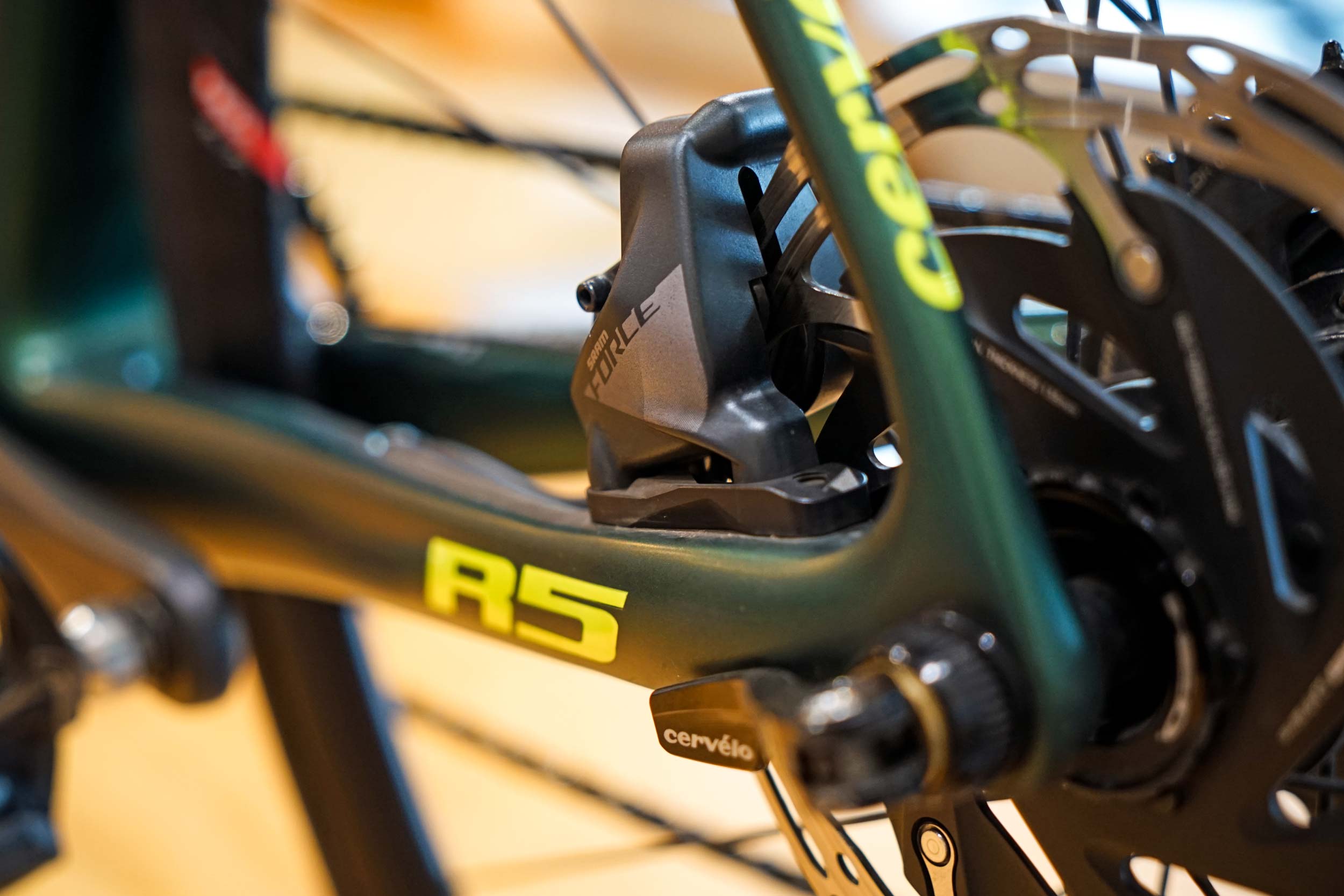 It is the first disc brake road bike James has owned and he proudly explains that it is also the first bike he built himself (under the watchful eye of colleague, Bike Gallery mechanic Leigh De Luca).

The DUB bottom bracket earned a blob of grease but didn’t get the Loctite treatment – and he doesn’t hear any mystery noises from that region of the bike.

It is, James insists, a quiet bike and rides well and provides a bit of comfort despite a relatively aggressive set-up with a low stack and long stem. 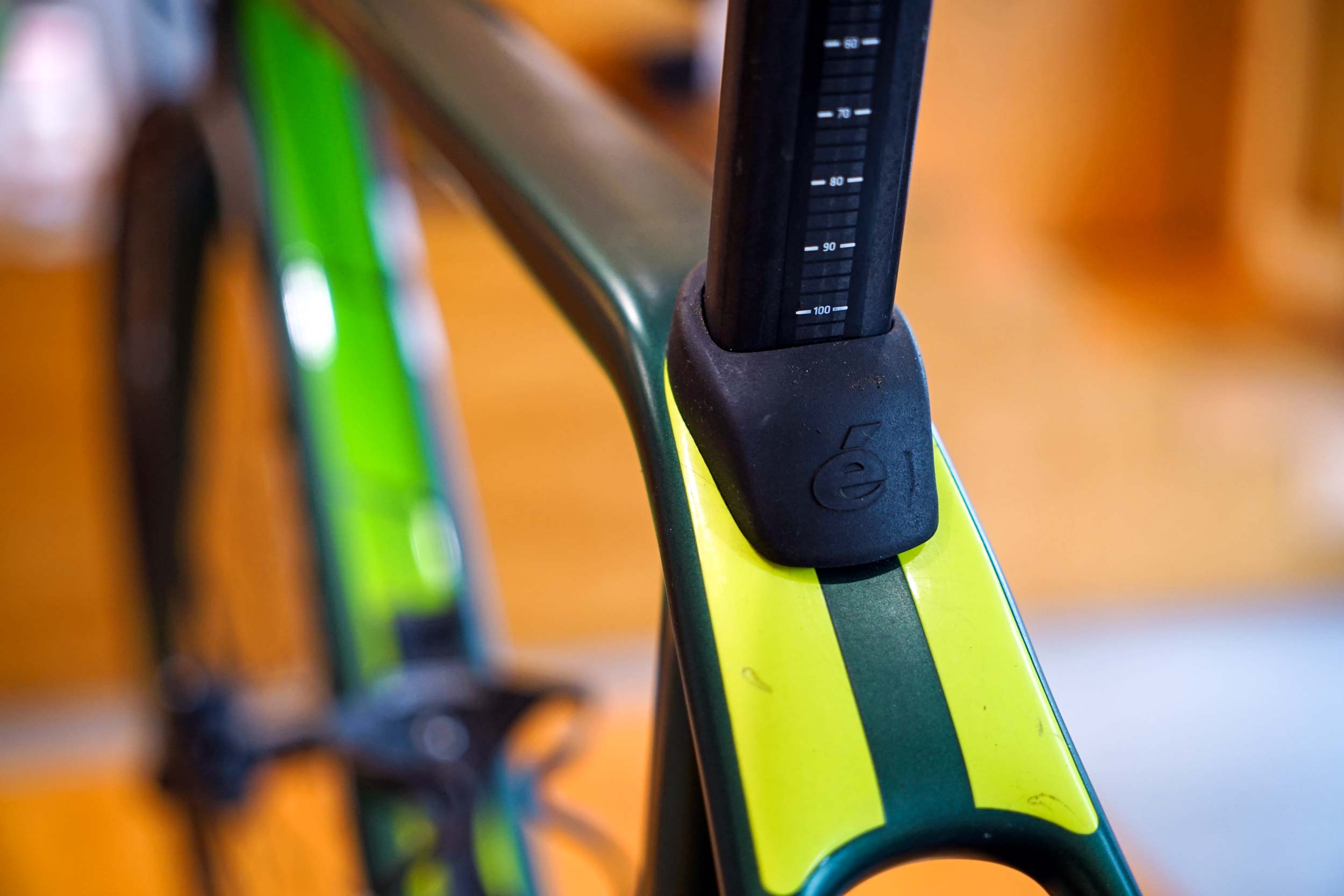 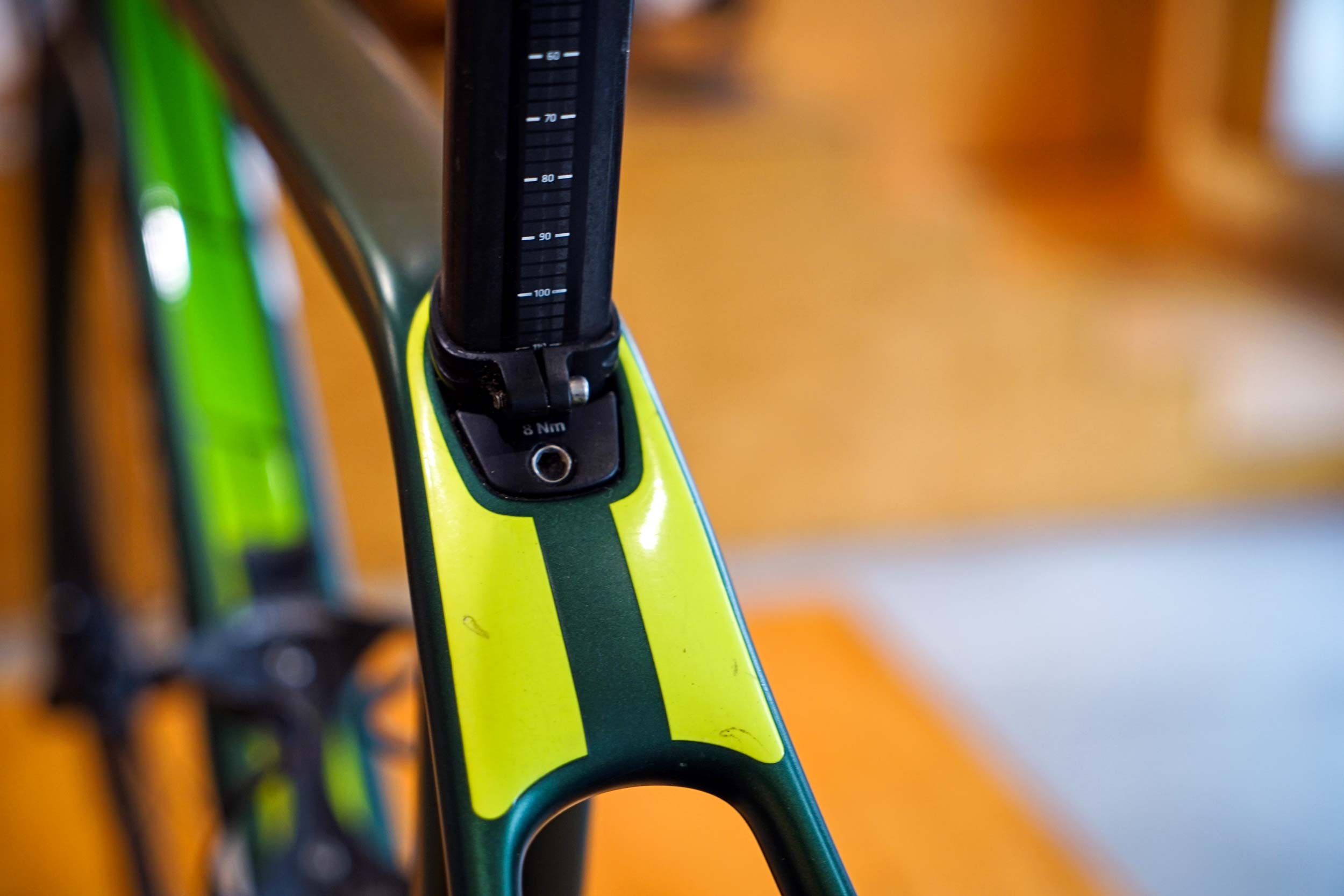 Using a bit of carbon paste on the seat post and ensuring correct torque for fastening means there’s not risk of post slippage issues which had affected some early Cervélo bikes.

A neat cover slips over the seat post fastening bolt and keeps grime away from the hardware (that includes a height market James says came in handy when travelling with the bike). 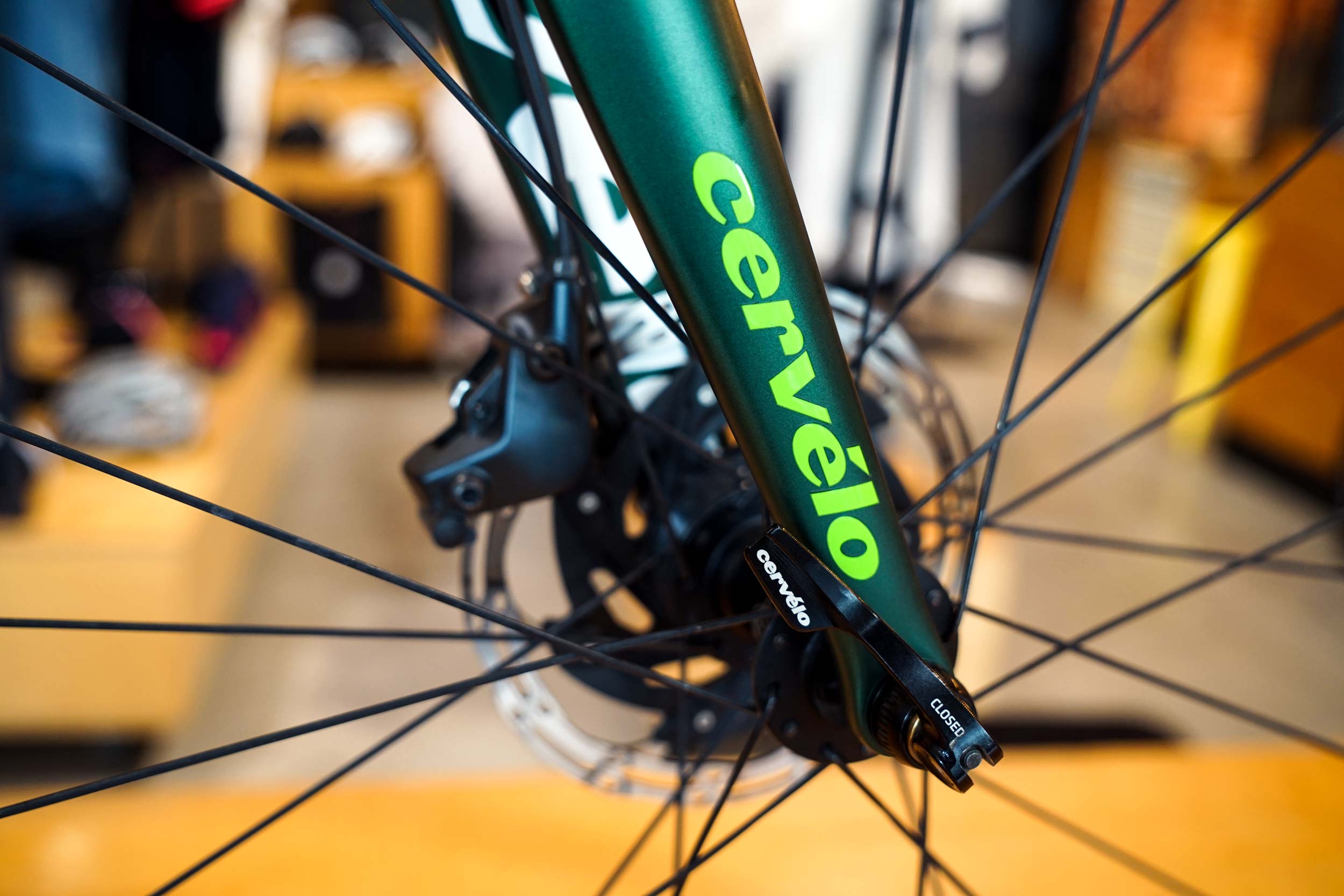 By following the instructions of Leigh, James has been able to properly set up the SRAM disc brakes so that they offer the amount of modulation he likes and, he says, there have been no hassles at all.

Before this bike, James had owned a couple of Focus Izalco Max frames – with rim brakes – and although this is a different brand to what he has been riding for a few years, it shares a common link: both Focus and Cervélo are part of the larger PON group, so some features carry over from one brand to the next. The RAT thru-axle fastening mechanism is one example.

This isn’t meant to be a bike test. It is not a formal review. Rather, it is a chance to showcase a ‘real world’ bike, one used by a keen cyclist who works in the industry and appreciates quality while keeping an eye on the cost.

There are a range of options if you want an off-the-shelf R5, with the spec completed before the box is shipped to the shop. Or you could do as James has done and build the frameset up and give it a bit of a custom touch. 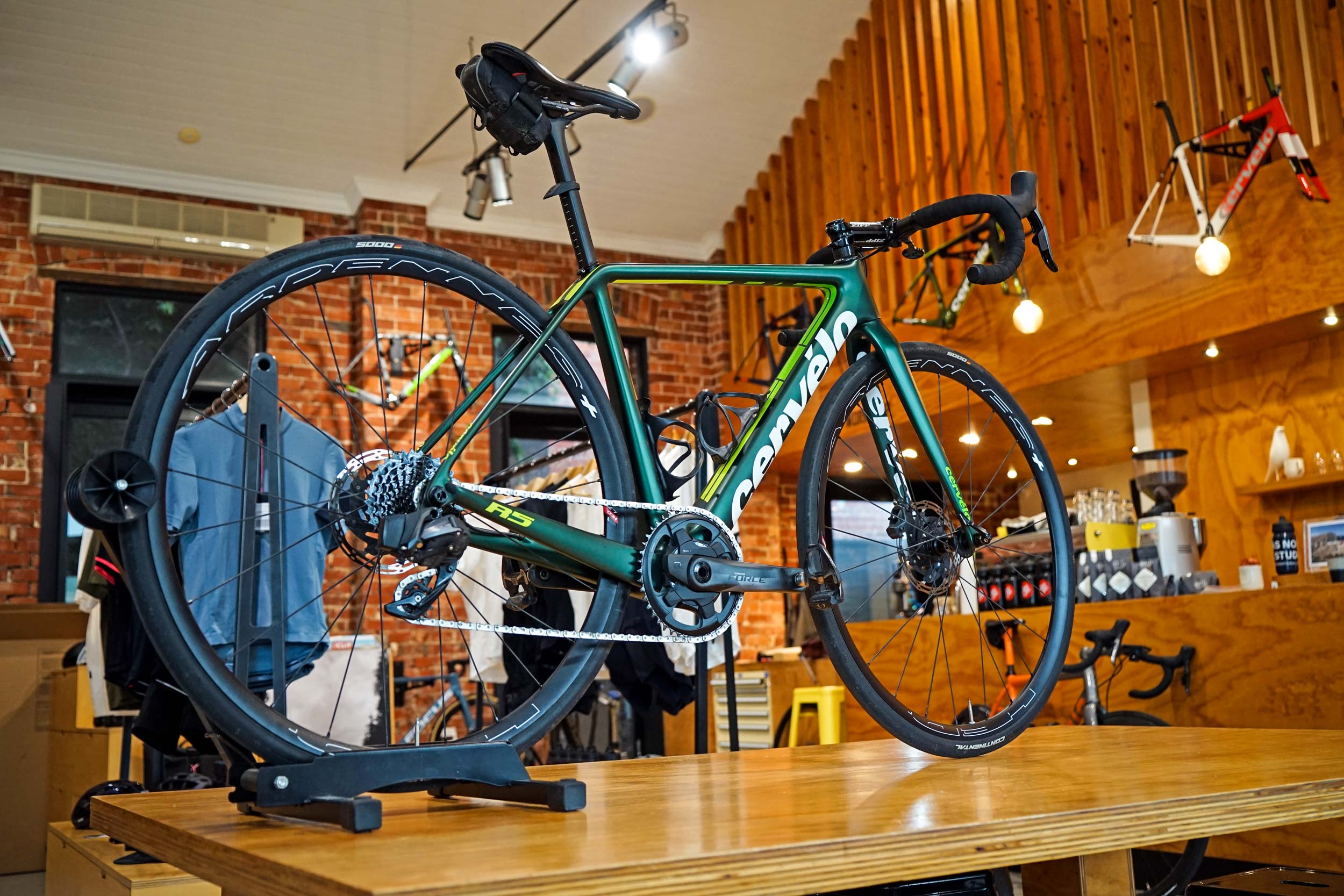