Adam Yates has jumped from second place to first in the GC rankings at the 2020 Tour de France after former race leader, Julian Alaphilippe, took a feed inside the final 20km… and was penalised 20-seconds by the race jury. 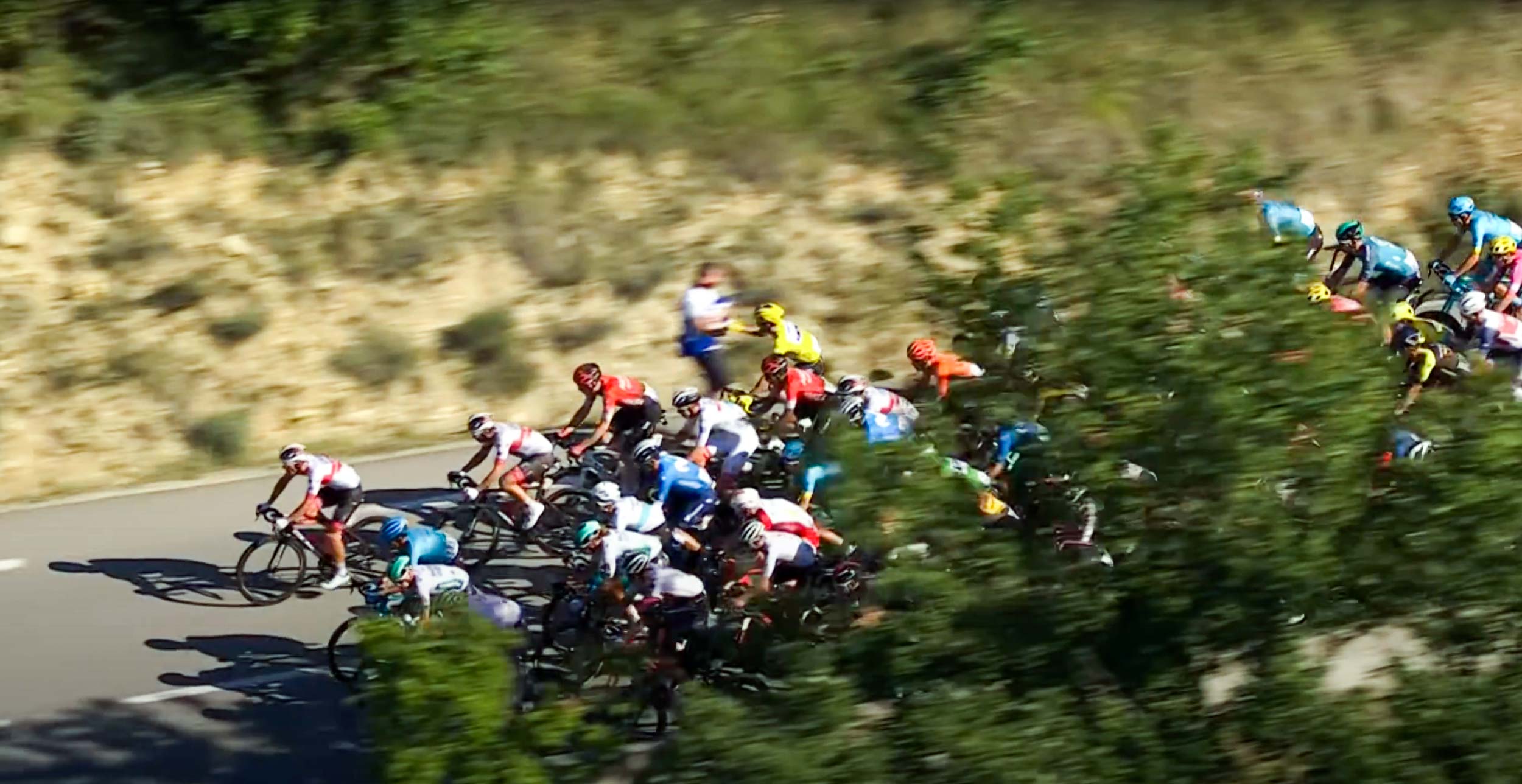 Collecting a drink from the roadside inside the final 20km… that’s a 20-second penalty, enough to shunt Julian Alaphilippe from 1st overall to 16th. (Photo: Alex Broadway, ASO)

“It’s not the way I imagined taking the jersey,” Yates said after being presented with his yellow jersey in Privas after a curious fifth stage of Le Tour 2020. “I’m not even sure what’s happened to Julian, I heard he got a time penalty for taking a feed late or something.”

On the podium, with his black face mask and yellow jersey on, Yates looked a little dumbfounded by it all. He looked into the distance, absorbing the reality that he is now the leader of the Tour de France with an advantage of three seconds over stage four winner Primoz Roglic, and seven seconds on another Slovenian, Tadej Pogacar.

He then shook his head gently as if to say: I’m proud, but I’m not raising my hands in triumph. It was all a little bizarre, just like other aspects of the fifth stage – like the fact that it was raced without any breakaway… but we’ll get to that shortly. 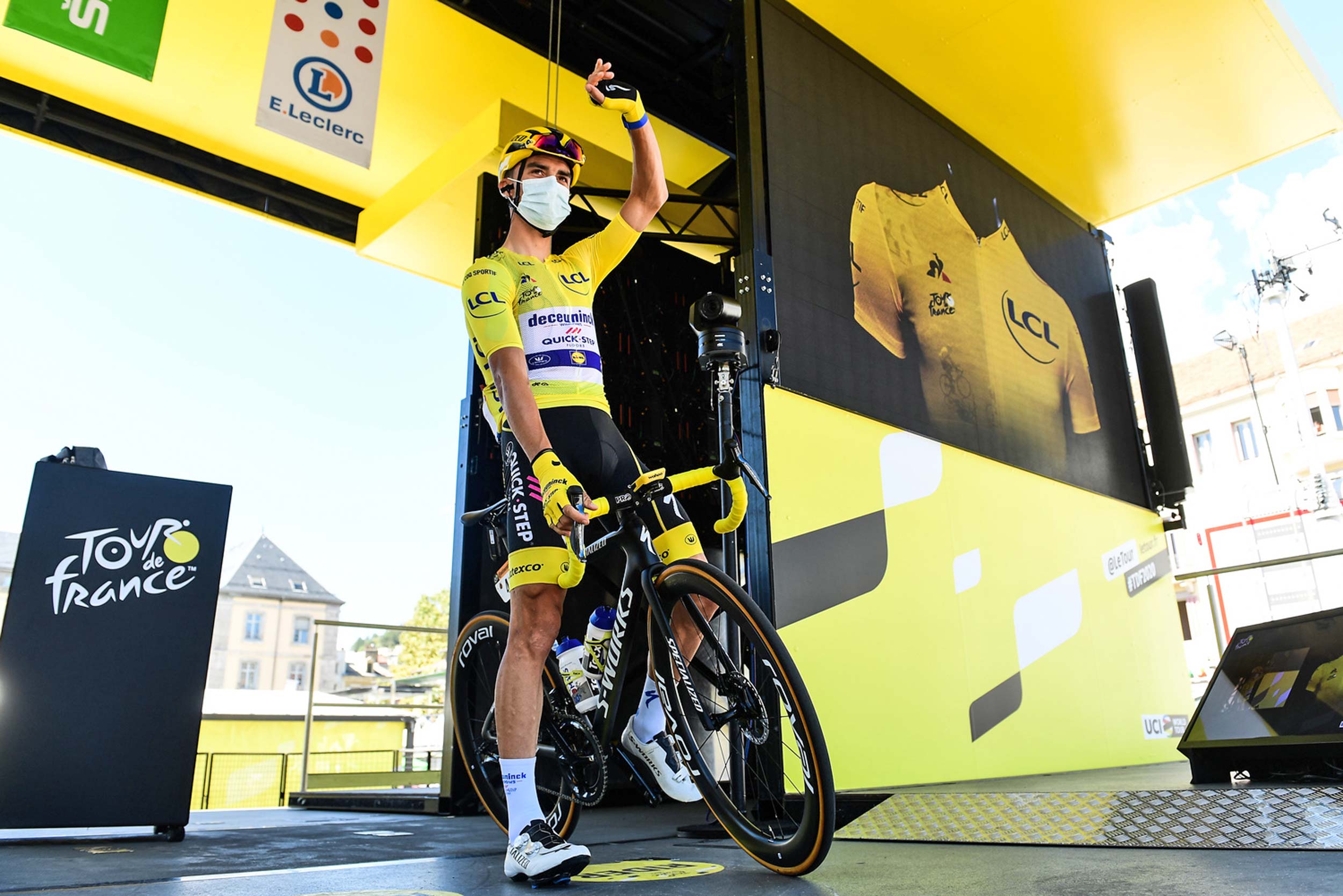 Alaphilippe began the 5th stage with a lead of four seconds over Adam Yates. He lost his yellow jersey because of an illegal feed and slips to 16th. “I didn’t realise at all that it was unauthorised… It was a very long and boring stage, with a very nervous finish.”

First, we consider the dramatic changes to GC overnight when Alaphilippe took a drink from a Deceuninck-Quickstep staff member on the right side of the road inside the final 20km. There are times when this rule is relaxed, because of excessive heat, for example, but the UCI slapped a 20-second penalty on him.

Alaphilippe drops from first to 16th overall after the fifth stage from Gap to Privas.

“I don’t think any rider would want to take yellow under these circumstances,” said Yates. “I’d prefer to take it with my legs rather than the result of a time penalty.

“I didn’t even find out until I was in the bus and showered. I feel bad for him.” 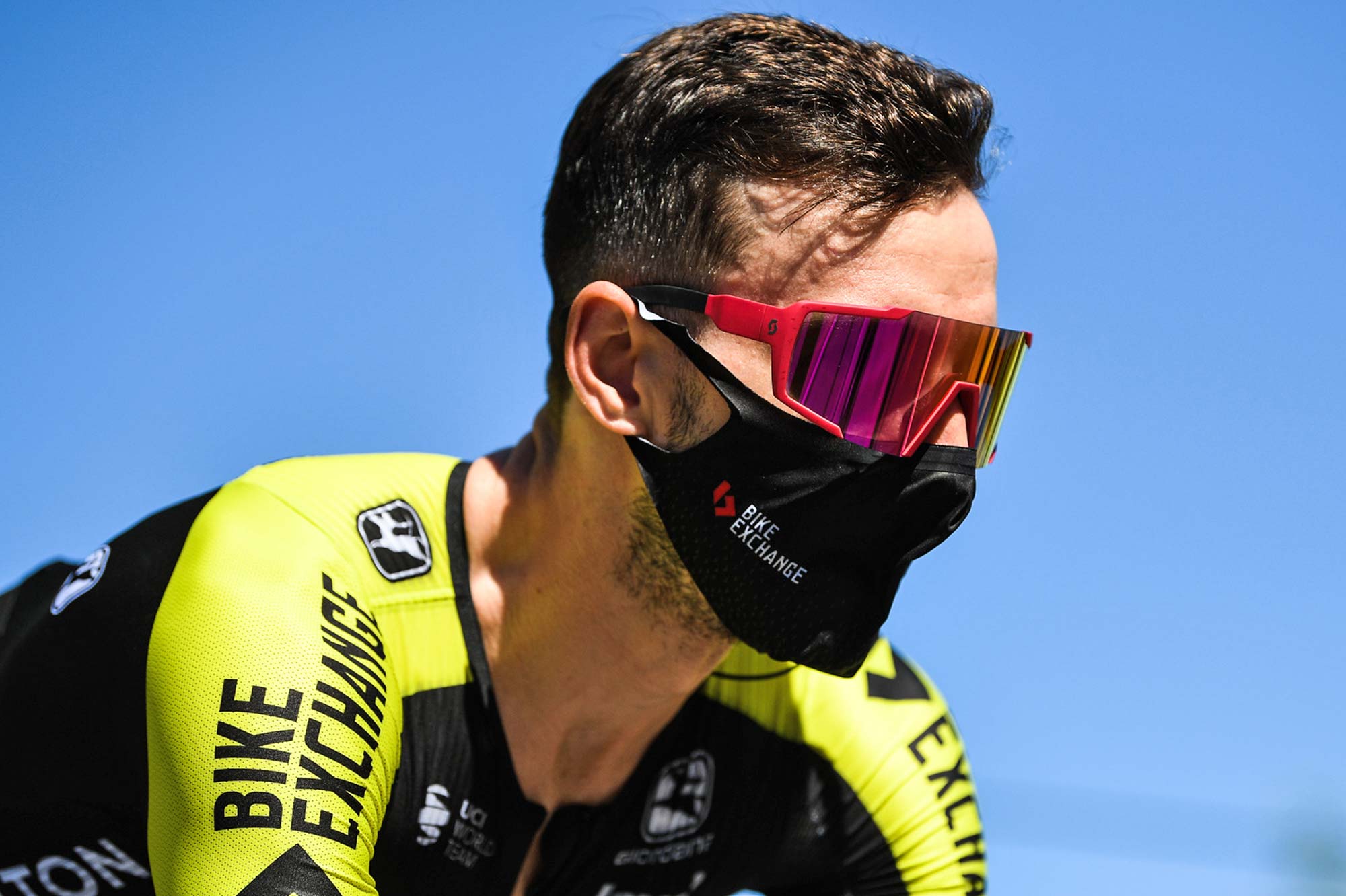 Adam Yates, the new leader of Le Tour 2020. It’s the first yellow jersey for the Australian-registered team since Daryl Impey wore it for a day in 2013. (Photo: Alex Broadway, ASO)

Clean rather than elated, he stood on the podium in the Ardèche and took note of the fact that the challenging sixth stage, from finishing on Mont Aigoual at 1,560m, will be raced differently than it would have if Julian hadn’t taken a drink.

“Tomorrow I was looking to try and take the jersey anyway, so I guess we’ll just try and go in with the same tactic, try and win the stage and see what happens.”

Instead of chasing time gains and hoping to take the yellow jersey Yates and his Mitchelton-Scott team-mates will need to defend a small advantage on GC.

There are 14 riders within 13 seconds of Yates, and that list of names is indeed an impressive role call: Roglic, Pogacar, Martin, Bernal, Dumoulin, Quintana, Chaves, Lopez, Bardet, Mollema, Landa, Pinot, Uran and Porte… then comes Alaphilippe. All are in contention for the yellow jersey after stage six, with less than a feed penalty separating them from Yates. 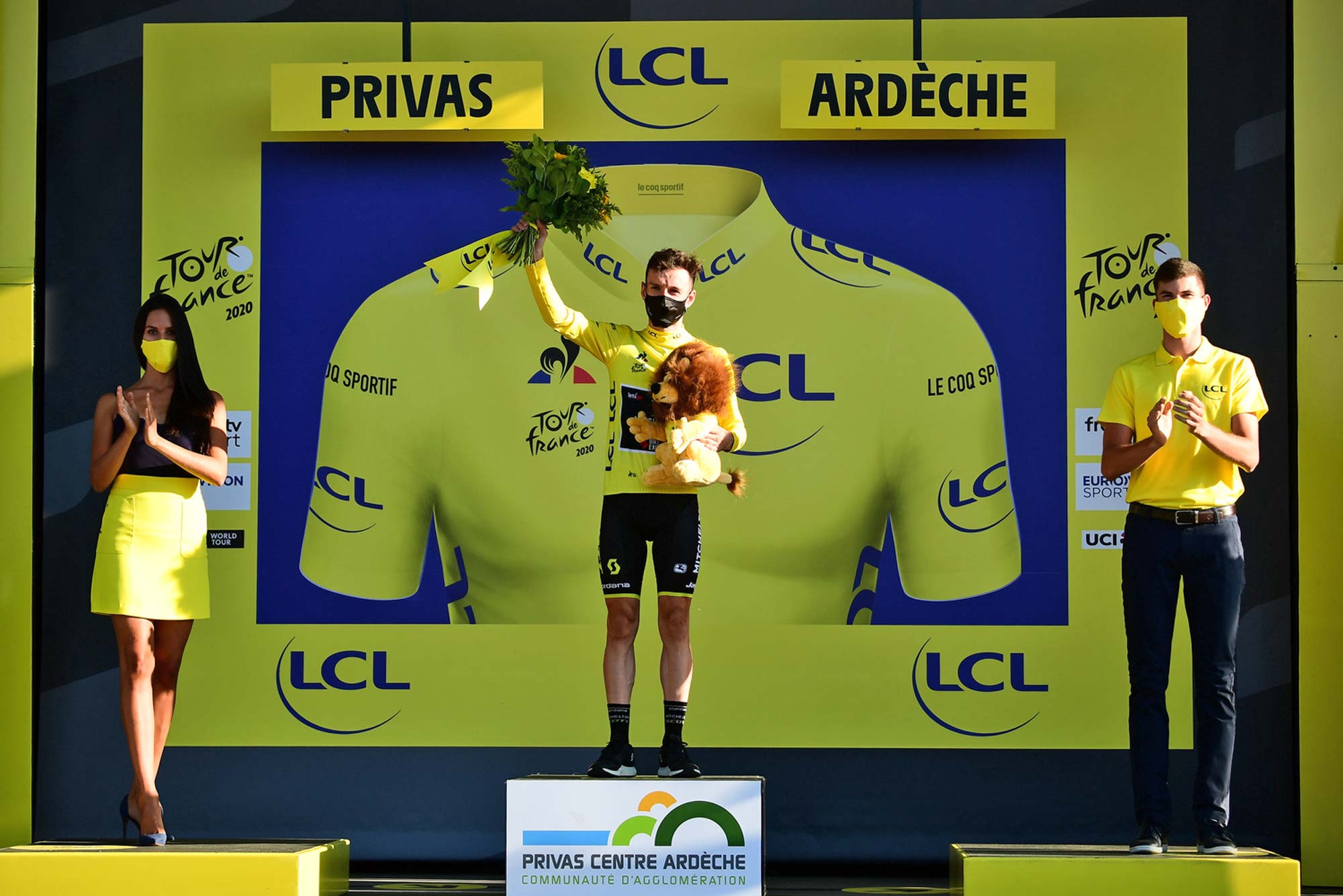 Not surprisingly, the Wolfpack focussed on the good news of the day rather than the bad in reporting the result of stage five. The Irish champion, Sam Bennett, was 3rd in the close sprint in Privas won by Wout van Aert (Jumbo-Visma) ahead of Cees Bol (Team Sunweb).

With 20 points for first at the intermediate sprint and 20 points for his 3rd place in the stage, Bennett moves into the lead of the green jersey classification with 123pts, 9 more than former leader Peter Sagan. 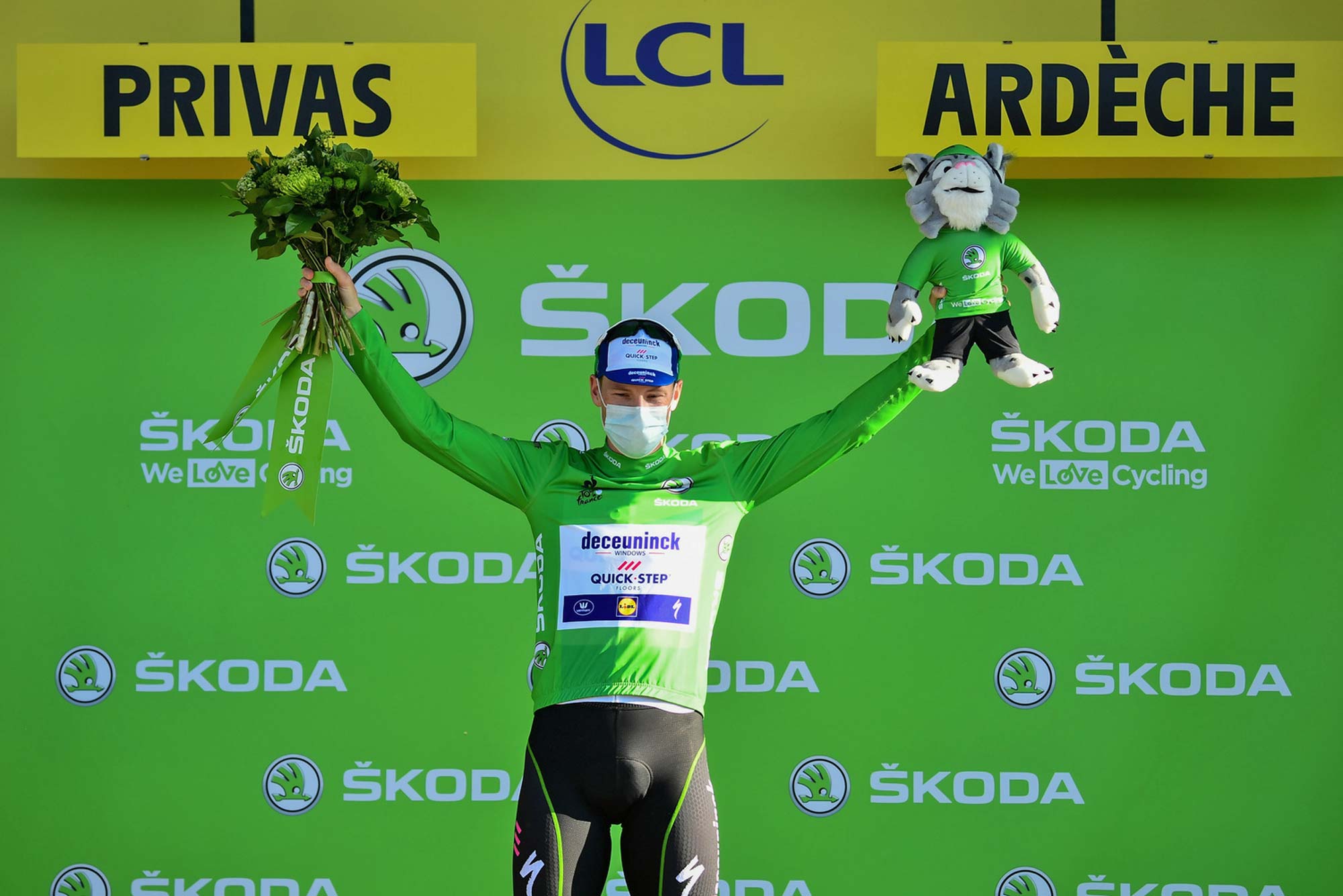 The Wolfpack lost the yellow jersey but inherited the green jersey in stage 5. Sam Bennett won the intermediate sprint and finished 3rd in the stage. He now leads Sagan in the points classification, 123pts to 114.

“I didn’t realise at all that it was unauthorised,” said Alaphilippe of his error. “It was a very long and boring stage, with a very nervous finish.

“We tried to stay concentrated to keep the yellow jersey and win the stage with Sam, but he did take the green jersey, which is good news.”

For many riders, losing the yellow jersey at the Tour de France because of a mistake would be devastating. For Alaphilippe it’s enough to prompt a shrug of the shoulders and another quick quip to the media. “It’s not a problem,” he concluded, “I’ll pick myself up again tomorrow and we’ll forget about it.” 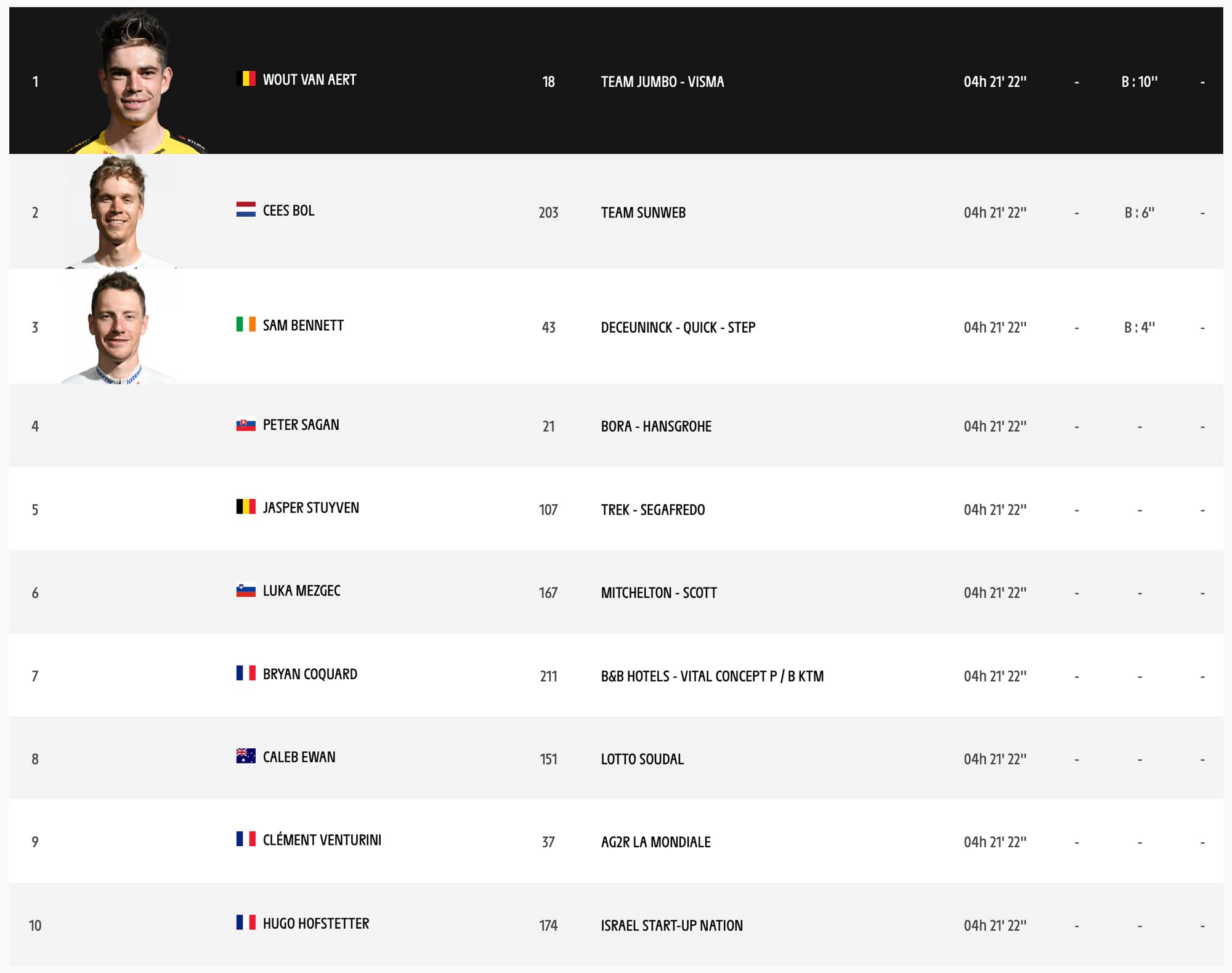