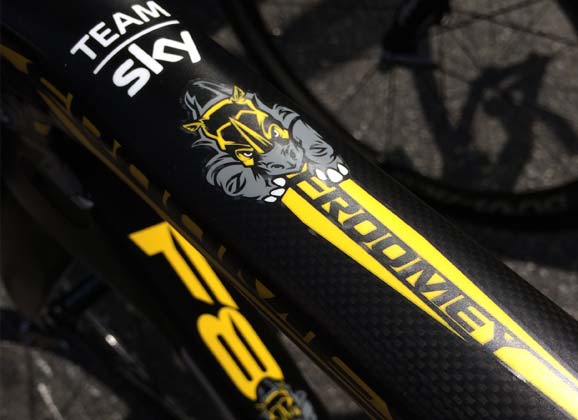 Froome: the story of the Rhino on a Pinarello

Before the start of stage 13 of the 102nd Tour de France, a rhino was seen on a bike. It relates to a charity called ‘Unite For Wildlife’, something that Chris Froome is keen to promote. He would get to talk about his bike at the end of the race to Rodez. Before we get to his explanation, we consider the trend of bikes customised for race leaders… 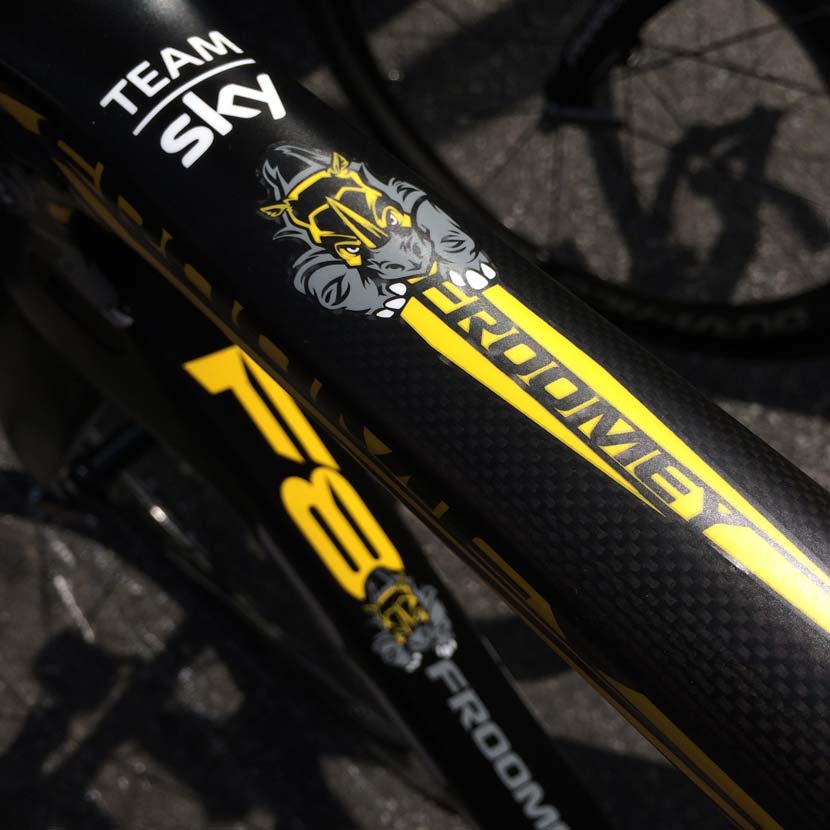 It was in 1997 that a trend emerged at the Tour de France. If the leader wears a yellow jersey, then why shouldn’t he also have a yellow bike? That was the question raised by Cannondale, the supplier of Mario Cipollini’s Saeco team. The Italian sprinter was famous for his showmanship and he didn’t mind bending the rules a little for a little bit of added publicity. There’s a sequence of “incorrect” outfits – ie. ones that were never the formal team kit – from Cipollini’s time as a professional. But it wasn’t until he led the general classification in the opening week of the race in 1997 that he was issued with a yellow jersey, yellow helmet, yellow knicks, yellow gloves… and a yellow bike.

The idea stuck and the idea is often repeated, particularly at the Tour de France. 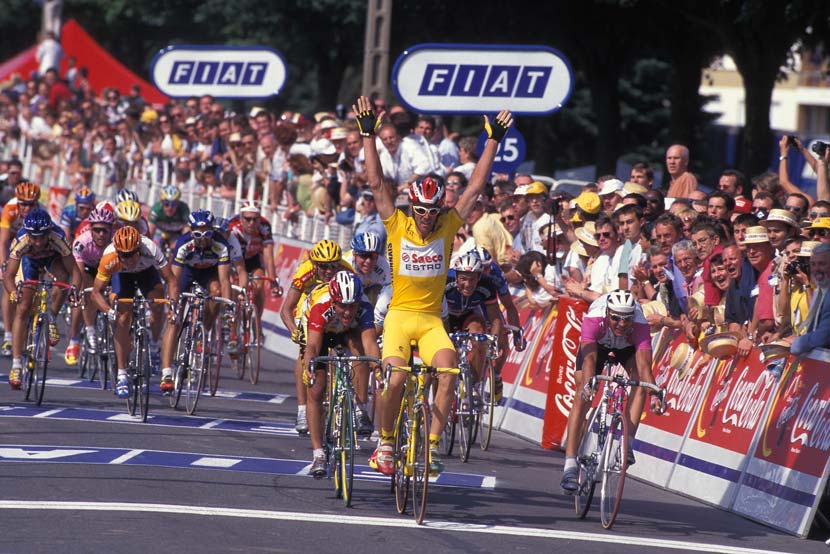 The yellow combo – Mario Cipollini wins stage two of the 1997 Tour in the yellow jersey… and yellow knicks, yellow helmet, yellow gloves… and on a yellow bike.
Photo: Yuzuru Sunada

We’ve seen a succession of entirely yellow bikes already at the Tour in 2015: one by BMC for Rohan Dennis in stage two, followed by one by Trek for Fabian Cancellara in stage three… and, of course, there has been the green Ridley for the erstwhile leader of the points classification, André Greipel.

In stage eight, a day after the absence of the maillot jaune in the peloton following the unfortunate accident of Tony Martin, another yellow themed frame appeared. 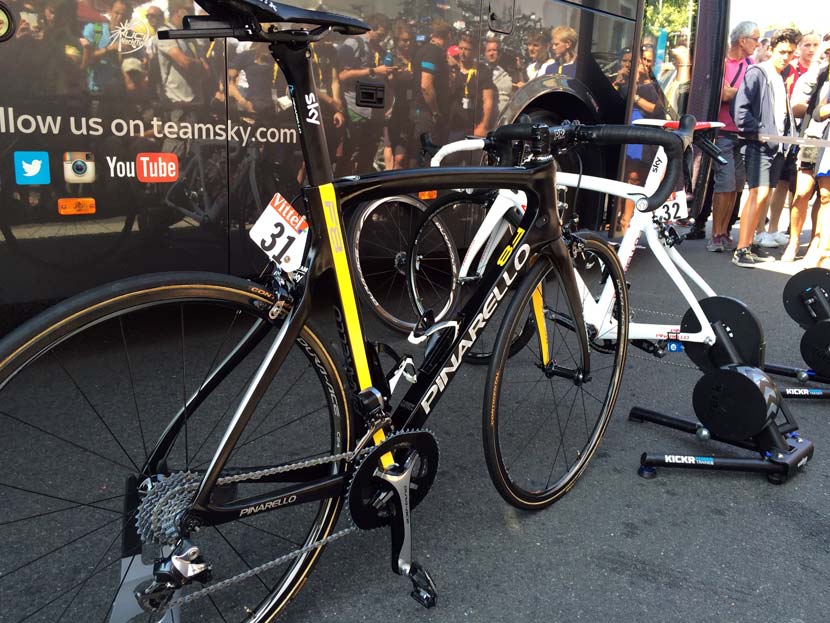 The first of Froome’s “yellow” bikes from the 2015 Tour.
Photo: Gary Blem

Chris Froome’s bike supplier, Pinarello, had worked with mechanics from the team – including the pedantic South African Gary Blem – and the usual blue lines on the black F8 Dogma frame was switched to yellow ones.

Unlike the BMC of Dennis and Trek of Cancellara the Sky leader’s bike only featured highlights of yellow rather than the entire frame in the Tour’s colour.

For five days, Froome used this classic looking black with splashes of yellow. He won a stage on it and got to Plateau de Beille with a commanding lead on GC.

And then Blem and his cohort got a little more creative. Instead of colour and colour alone, they decided to add a graphic of something dear to Froome: a rhino. 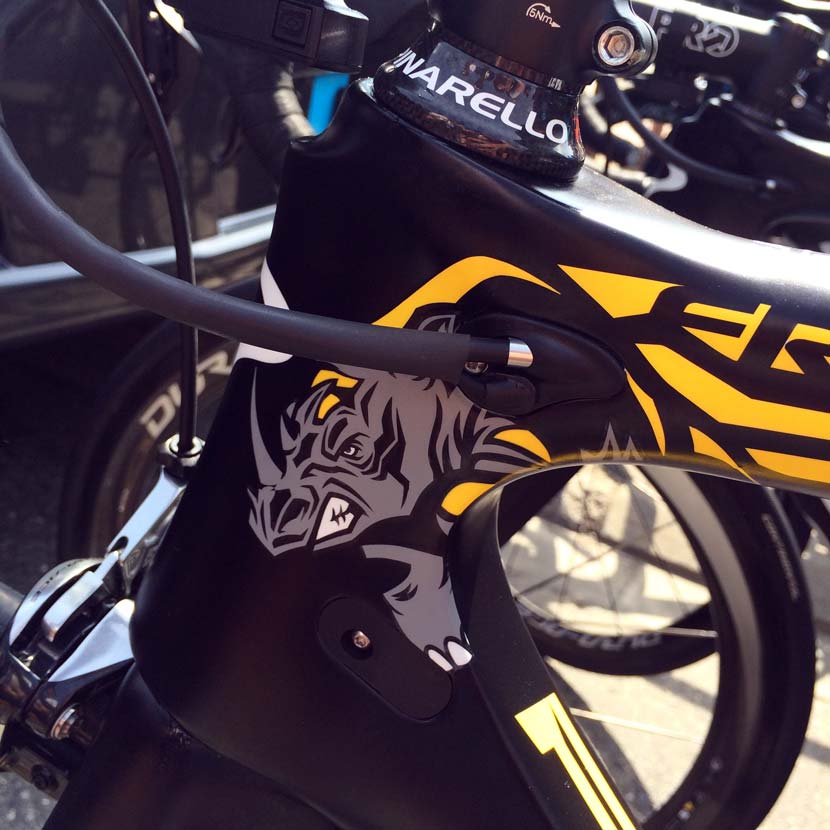 “Obviously my childhood was spent between Kenya and South Africa and wildlife has always been a bit part of my childhood, something that’s quite special to me,” Froome explained after the 13th stage, the first race on the new rhino-themed bike.

“It was actually my mechanic, Gary Blem, who came up with the idea to make something a little bit more personalised on the yellow Tour de France bike. The idea came up to put a small cartoon picture of the rhino charging with his head down.”

Unlike the gorilla that features on Greipel’s Ridley frame or the viking on Alexander Kristoff’s saddle or many of the other graphics that can be found on bikes in the pro peloton, the theme doesn’t relate to the nickname of the rider and it certainly isn’t in relation to his aesthetic. There’s little resemblance… (Actually come to think of it, does Greipel really look like a gorilla?)

When RIDE spied the new decal at the start of stage 13, it was photographed and duly shared. Within a minute, Froome Tweeted the image with the words: “Head down & charge #TDF2015 #MaillotJaune.” (And, ever the gentleman, the appropriate credit: “Pic: @ridemediaHQ”.)

Like most things a leader of the Tour tweets, it generated plenty of feedback and, after a seventh day in the yellow jersey this year, he had a chance to explain the logic behind the graphic.

“I’ve agreed to become an ambassador for ‘United For Wildlife’, raising awareness for rhino poaching, elephant poaching… if it continues at the rate it is now, there aren’t going to be anymore rhinos in the next few years to come, that’s for sure. That’s something really sad.

“I’ve got a little kid on the way and I want him to be able to grow up one day and see wildlife in the wild for himself. So it’s something that’s quite close to my heart and I’m really happy to be able to be an ambassador for them.” 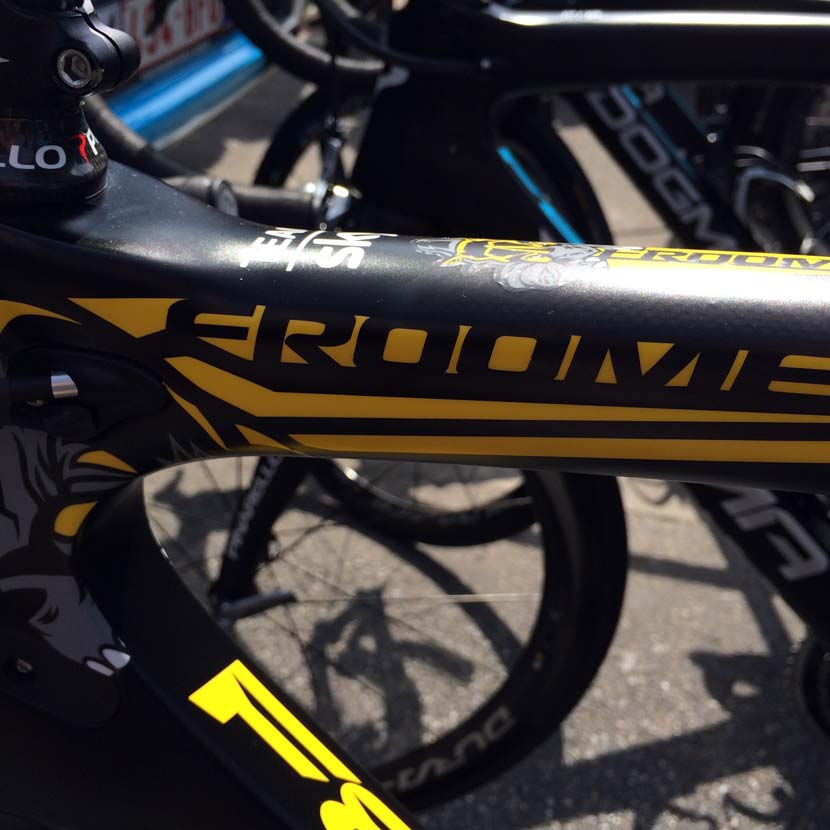 ‘Froomey’… and to think, until now, we’ve always spelled his nickname as ‘Froomie’. Okay, we stand corrected.
Photo: Rob Arnold

It’s an anecdote that harks back to the olden days; when the leader of the Tour de France could talk about the charity work they are involved with or their children or their bikes… and not doping. It was like 1997 all over again (well, that bit before the positive control of Djamolodine Abdoujaparov… but that’s another story). Of course questions need to be asked but there’s been an influx and Froome isn’t able to answer them any differently than he already has. And so he gets a reprieve.

It was, in fact, the first time in 2015 that the post-race interview session with Froome was devoid of questions about doping. And he seemed most pleased.

Head down and charge…! The race continues and so will the questioning but at least a bike has offered a chance for Chris to talk about something dear to him.